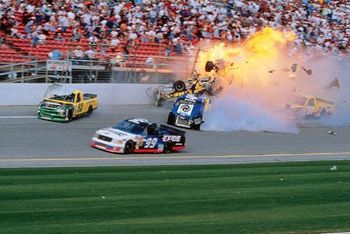 NASCAR fans understand the danger of a sport in which speeds approach 200 mph and drivers are racing door-to-door and trading paint on a regular basis.

Indeed, a major part of NASCAR's appeal has always been the element of danger. Fans often cheer for wrecks and some race-goers are disappointed if they have the misfortune of attending a clean race.

Thankfully, crashes as horrific as the ones shown here are few and far between. But when it comes to racking up the YouTube playcounts these bone-rattling NASCAR clips lead the way.

Without further ado, I present the 13 scariest crashes in NASCAR history.

To this day it is the biggest wreck in NASCAR history, as 37 cars out of the field of 73 were involved. More than likely, it will hold this distinction forever, as NASCAR no longer allows fields of this size.

Remarkably, there were no fatalities or life-threatening injuries.

Petty's career ended with this crash, in which he suffered a crushed chest, punctured lung, fractured collarbone and a broken leg, along with lesser injuries. He spent several days in a coma and the next four months in the hospital.

In a massive understatement, Lee Petty later explained that "it was a left turn, and we went straight."

Richard Petty summed up his father's accident like this: "There wasn't anything left of either car. There was blood everywhere, and they had just taken Daddy out of the car and were putting him in the back of an ambulance. He was lifeless."

Richard Petty survived numerous scary wrecks throughout his long career, and this crash at Darlington Raceway was among the worst. Prior to the introduction of head and neck-support devices, any wreck involving flipping and rolling had the potential to be life-threatening.

The Petty family is the most storied in NASCAR history but crashes have taken their toll on Petty drivers.

This crash would undoubtedly look worse if the video wasn't in slow motion, but it suffices to say that the impact was hard enough that Richard Petty nearly broke his neck.

In order to continue racing, he chose not to inform NASCAR about the injury. Officials didn't find out until weeks later.

Petty would win "only" eight more races in his career following this crash. Some speculate that this was the beginning of the end for him as a top-level driver.

The high speeds at Talladega Superspeedway have long been infamous for contributing to the danger of flying cars.

Bobby Allison's 1987 wreck prompted NASCAR to install catchfences to improve fan safety. The video shows how little of the fence (and of his car) remained after Allison's tore through it at nearly 200 mph.

Unfortunately, this did not help the fate of drivers such as Carl Edwards, whose car was shredded after being launched in into the catchfence...but that video will come later.

After watching this video, and you may think, "there's no way a human being could survive that crash."

Waltrip hits the wall head-on in one of the hardest hits in NASCAR history. His car explodes into hundreds of pieces and it seems impossible that Waltrip could have survived in the wreckage.

Waltrip not only survived, but he went on to win two Daytona 500's and start his own race team.

In a cringe-worthy crash at Talladega Superspeedway, Rusty Wallace endured one of the worst crashes of his career.

Little was left of his racing machine following his barrel rolls through the Talladega infield. Wallace suffered a broken wrist in the crash.

In fact, Wallace had suffered a similar wreck just two months earlier at Daytona. WIthout these two bone-jarring incidents, Wallace likely would have won the season title, which he lost by only 80 points to Dale Earnhardt.

Dale Earnhardt was a master of Talladega, winning Cup races at the track a record 10 times. But even he was not immune to the carnage that all too often strikes at the superspeedway.

In a crash that appears eerily similar to his fatal crash at Daytona in 2001, Dale Earnhardt gets the short end of the stick at this 1996 Talladega race. Earnhardt was visibly shaken as he was helped from his torn-up race car following the crash.

This crash is one of the most shocking in NASCAR history.

It's incredible that Geoff Bodine survived being thrown into the fence, two fireballs, and multiple hits at one of NASCAR's fastest tracks. Many observers feared that Bodine had been killed.

There was almost nothing left of his truck when all was said and done, but thankfully Bodine lived to race another day.

We can thank Michael McDowell for making qualifying interesting for possibly the only time in NASCAR history.

This crash is also the reason that many fans even know who Michael McDowell is.

In a testament to the safety improvements NASCAR has made, McDowell walked away from this amazing wreck with a wave to the fans, if not a smile on his face.

This horrifying crash shows just how dangerous tracks can be without modern safety precautions. Pardo's car literally disintegrated when it barrelled headlong into the exposed end of the inside wall.

Pardo actually won this race since he was leading at the time of the crash and the race was called following his death. I guess this is the best way to go if you're a racer.

Coming off turn four in the spring 2009 Talladega race, relative unknown Brad Keselowski moved to the inside and began passing Carl Edwards for the lead. Edwards made an attempt to block Keselowski, and, well, the rest if history. The two drivers have been going at it ever since.

It's debatable who's most to blame for their continuing series of wrecks at tracks such as Atlanta and Gateway, but no one can deny that the frightfulness of this wreck is eye-opening. Skip ahead to 0:50 to see the wreck.

Although seven fans were injured by flying debris, NASCAR is surely grateful that nobody was killed in the incident. Drivers have since commented that it's only a matter of time before flying cars cause a fatality at one of the restrictor-plate tracks.

2.5 mile Pocono Speedway often provides for dull racing, but it is more than capable of creating incredible wrecks.

Measured by force of impact, Elliott Sadler's 2010 Pocono crash is one of the hardest in NASCAR history. Due to both the safety of the cars and some, luck Sadler walked away shaken but unharmed.

Kurt Busch's crash gets most of the footage in this video; skip to 1:36 to see Sadler's wreck. Busch's crash was pretty spectacular too, though not nearly as hard as the lick Sadler took.