College Football 2011: 20 Stadiums That Are Living on Borrowed Time 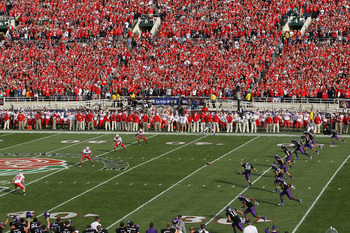 Old, historical football stadiums are part of the charm of the college game.

Notre Dame, Ohio State and Penn State play in some of the best stadiums. One big reason why is upgrades over the years.

Then there are those stadiums that haven’t kept up with the times and the time may be right for a new one or some serious renovations.

Here are 20 that could go either way. 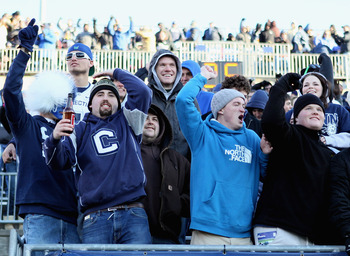 Rentschler Field opened less than 10 years ago, so tearing it down and starting over is not an option.

However, UConn feels it is a big-time program now, so making an investment in a stadium expansion program is a good step.

Shouldn’t the defending Big East champions be able to hold more than 40,000 for a home game? 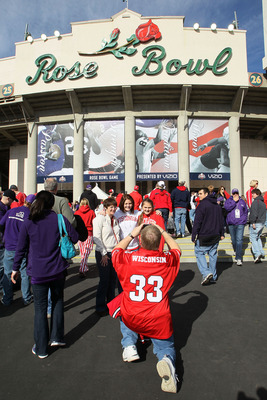 It may be blasphemous to say this in Big Ten or Pac-12 country, but the Rose Bowl is not the best location to play five to seven home games each season.

If the stadium were so great, would Los Angeles still be lacking an NFL franchise?

Because of the “bowl” design, many fans are forced to seat 50 or 60 yards away from the action on the field. 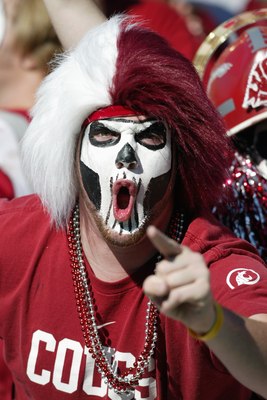 The Cougars have been an embarrassment of a football team for a long time, and Martin Stadium hasn’t been much better.

Paul Wulff can't blame all of Washington State's woes on the stadium, but it's a start.

Of course Washington State has plans to renovate it, but until then Martin Stadium stays on the list. 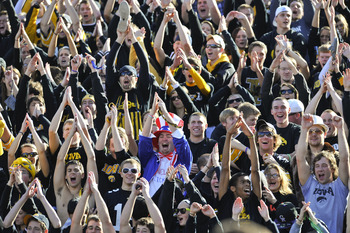 The atmosphere at Kinnick Stadium is among the best in the nation.

However, the facility is old and needs some upgrades.

Parking is horrible, the seating is cramped and the bathroom facilities are outdated.

There were some nice upgrades in 2006. 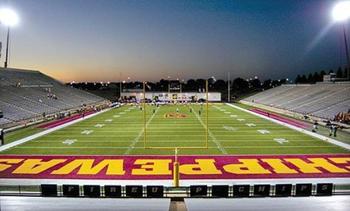 It’s not quite fair to pick on one of the little guys, but Kelly/Shorts Stadium is the worst football stadium in the Mid-American Conference. 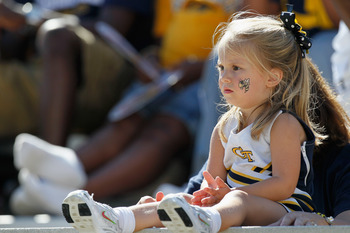 Georgia Tech’s downtown Atlanta stadium has had a number of renovation projects since it opened in 1913.

The upgrades have included luxury boxes and a larger video board. However, parking remains a nightmare.

Replacing the historic stadium may be out of the question, but it wouldn’t be a bad idea. 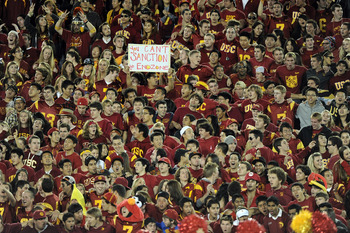 Back in Southern California again and now it’s time to pick on the LA Coliseum, which was originally built for the 1932 Olympics.

Since it needed to have a track, it has the oval shape, which puts some seats what seems like an entire football field away from the field.

You can’t overlook the fact the stadium is tucked away in one of the most dangerous areas in Los Angeles, including gang violence. 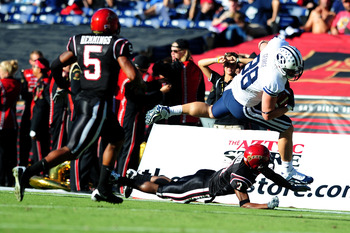 San Diego State is the second-class citizen in a second-rate cookie cutter stadium built in the 1960s.

The Chargers are the No. 1 tenant.

Qualcomm is a horrible venue and the Aztecs would benefit greatly from a smaller, on-campus stadium. 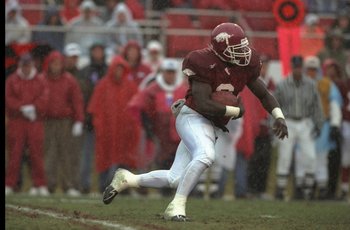 War Memorial is Arkansas second home and the Razorbacks play two games a year at the Little Rock location.

It is the classic Catch-22.

Because of its design, the Arkansas fans are almost on top of the visiting team yelling and screaming, which can make life, for about four hours, miserable.

While state officials completed more than $7 million worth of renovations in 2010, the stadium still has plenty of issues.

Arkansas officials may not admit it, but they'd probably like to keep all home games in Fayetteville. 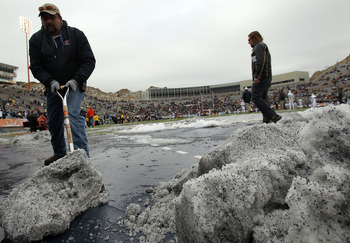 The Sun Bowl, which opened in September 1963, was christened with a 54-yard touchdown run by Larry Durham of Texas Western.

It holds 51,500 and has had some renovations over the years, including the addition of Astroplay field surface in 2001.

But UTEP should really consider some major renovations to the stadium. 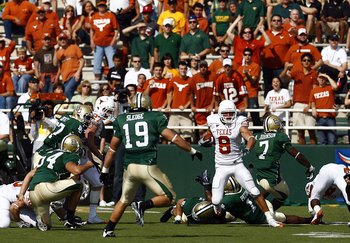 For a lot of other programs, Floyd Casey Stadium would seem just fine.

But when you play in Texas the stakes are much higher.

Baylor’s ability to compete for big-time recruits in the state against programs like Texas, Texas A&M and Oklahoma is hampered by the facility.

Even Texas Tech and TCU, which is planning a serious upgrade as it moves to the Big East, are in a better position. 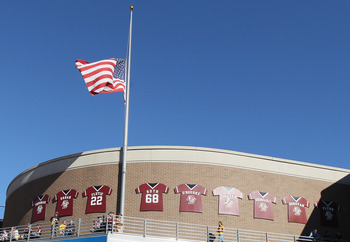 Boston College hasn’t completed a serious renovation of Alumni Stadium since it opened in 1957.

The Eagles are not as popular as other New England sports teams, but it’s hard to believe the biggest addition has been a statue of Doug Flutie.

It has a little Fenway charm, but lacks the passionate fans. Alumni Stadium holds just 44,500. 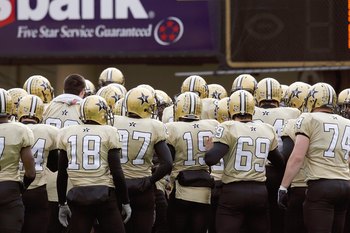 Vanderbilt’s home field is far from being one of college football’s hallowed grounds.

Tickets to games are relatively easy to obtain, and game day lacks the normal atmosphere of tailgating. 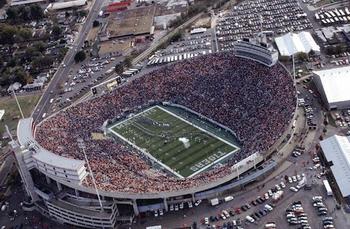 The future of the Liberty Bowl is unclear as Memphis city officials have considered trying to come up with funding for a new stadium.

The stadium is adequate for a program of Memphis’ stature, but there are still drawbacks.

The Liberty Bowl does not have enough luxury boxes, and it has way too many backless bench seats.

Restroom facilities and concessions are outdated and the facility shows the wear and tear of more than four decades of use. 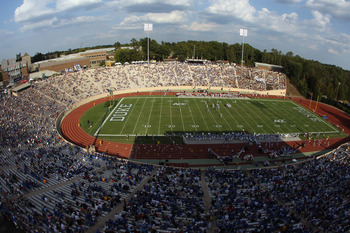 Walking across Duke’s campus to get to Wallace-Wade is the best part of visiting the Blue Devils’ home field.

Once you get inside, the experience is lame.

Once again, there are high school stadiums that are more pristine.

They also have bleacher seats throughout the 30,000-plus capacity stadium, which is unacceptable today. 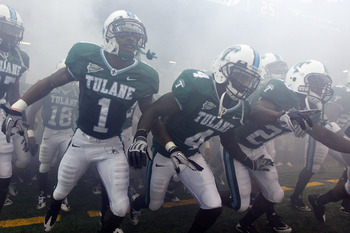 Tulane’s small, but dedicated fanbase is demanding an on-campus stadium.

It’s a key cog if Tulane really wants to be a serious player in college football.

The Green Wave had an on-campus stadium until about 30 years ago.

Playing in a massive dome that was created for the New Orleans Saints and the Sugar Bowl does not bode well for Tulane.

Hey, just raise about $60 to $80 million and Tulane could have its on-campus facility. 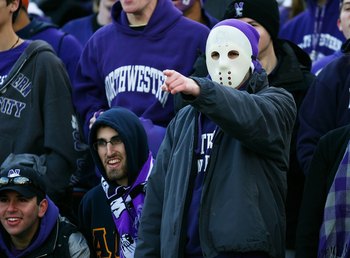 Fans like to call it little Wrigley Field. That’s cute.

For a school with a bunch of smart people, the football stadium sure lacks any original thought. 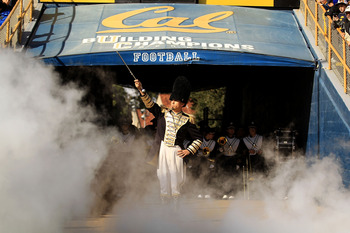 Let’s see if we have this right.

The folks in Berkeley built the stadium on a fault line. The stadium is also situated near some beloved and sacred trees.

Whoever built this thing must have thought an earthquake or a bunch of hippies would eventually tear it down for them.

Instead, Memorial is due for a major upgrade and the time is just right. 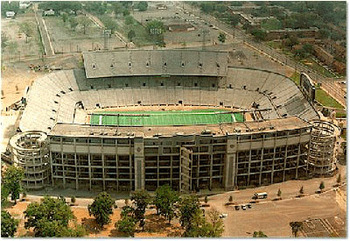 Legion Field may be a landmark in Birmingham, but its days may be numbered.

UAB officials are seriously considering an on-campus stadium, and the timing is right.

Playing in the 84-year-old Legion Field isn’t the best option for UAB any longer. 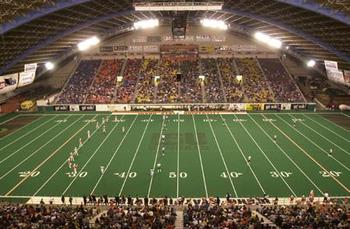 The Kibbie Dome opened in 1975 and remains an abomination on all of college football.

With a seating capacity of just 15,000, it is the smallest stadium of all FBS teams.

The facility has undergone a couple renovations and surface upgrades, but there is nothing redeeming about Kibbie.

While it covers many more uses than just football for Idaho, the wrecking ball can’t come soon enough.