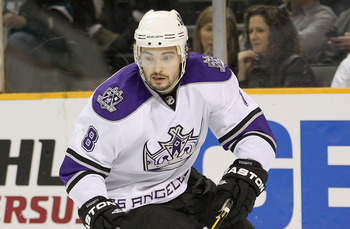 This offseason is one of the most important ones in recent memory for The Toronto Maple Leafs and Brian Burke is well aware of this fact.

"Burkie" has assembled the second-youngest team in the NHL, and for the first time in many years, the organization has a cache of very good prospects (not great but very good) as well as some talented young players on the roster and in the AHL. They will also have an estimated $15 million in cap space after signing James Reimer, Clarke Macarthur, Luke Schenn and Carl Gunnarson and will need to round out the roster with four players once those signings are completed (assuming they are that is).

That being said, the Leafs are one of only two teams in the NHL who have failed to make the playoffs post-lockout (Florida being the other) and thus, taking a huge leap forward in 2011-2012 is crucial not only for Burke's job security but for the sanity of the fans and the reputation of this once proud franchise.

And that brings us to Drew Doughty, a 22-year-old future Norris Trophy winner who would look fabulous playing for his hometown Toronto Maple Leafs (well close enough, he's from London, Ontario). Oh, and he just happens to be a restricted free agent who could potentially be had for the right price, assuming the offering team is willing to pony up some serious dough and some draft picks. The following slides are five reasons why I feel the Leafs need to sign Drew Doughty to an offer sheet that the Kings can't match.

Reason No. 1: They Need a Franchise Player

Ever since the departure of Mats Sundin, the Leafs have lacked a franchise player that they can truly build around. With apologies to Phil Kessel and Dion Phaneuf, neither come close to fitting the bill. Doughty would immediately give them that stud presence that they so desperately need.

Reason No. 2: Doughty Would Take Pressure off of James Reimer 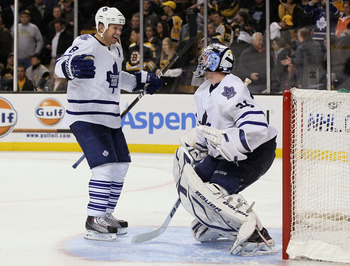 James Reimer is an intriguing story as he came out of nowhere last year to become the Leafs undisputed No. 1 goalie.

And while many, including myself, believe that he IS the real deal, 30 games is too small a sample size to declare that outright. Additionally, being the goalie of the Toronto Maple Leafs is arguably the most pressure-packed job in the NHL and adding a stud like Doughty would solidify the back end and take some of those first and second chances away from the opposing forward.

This would subsequently take some pressure off of Reimer and enhance his chances of continuing to flourish between the pipes for the blue and white.

Reason No. 3: The Leafs Would Have the Most Formidable Defence Corps in the NHL

Brian Burke has never been shy about his mantra of building from the net out. A defence corps consisting of Doughty, Schenn, Phaneuf, Aulie, Gunnarson and Komisarek would likely be the top unit in the NHL. Need I say more?

Reason No. 4: The Leafs Dreadful Powerplay Desperately Needs a Quarterback

Since the departure of Tomas Kaberle (and many would argue well before that), the Leafs have lacked a true quarterback for their powerplay.

They have finished near the bottom of the league in powerplay efficiency the past couple of seasons and is one of the main reasons the Leafs have missed the playoffs in those years. Doughty suffered through a lacklustre season by his standards last year, however in 2009-2010 he tallied 59 points, 31 of which came on the powerplay.

Imagine a unit with Doughty, Phaneuf, Kessel, Kulemin and Grabovski (or a No. 1 centre to be named later). Pretty intriguing.

Reason No. 5: If You've Got the Cap Space You May as Well Spend It Wisely

Is it a wise move to spend $6-$7 million per season on a 22-year-old who many in-the-know hockey people are comparing to Ray Bourque?

I'd say so, and I'd also argue that even giving up the three or four first-round picks it would cost to sign Doughty to an RFA offer sheet are well worth it. Cornerstone stud defencemen don't grow on trees, and Doughty would not only help attract free agents this offseason, but perhaps some potential 2012 UFA's such as Zach Parise...I'm just sayin'!