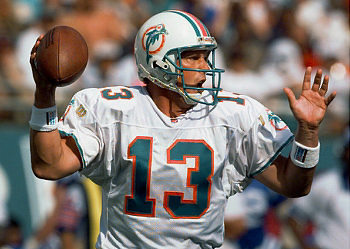 The perpetual disappointment that has come to characterize the Miami Dolphins has spread a discouraging stigma around the franchise. However, this team still boasts one of the richest histories in the NFL thanks to the many characters that swam through the city.

Most of the 15 players on this list suited up for the 'Fins during the team's glory days, so perhaps this current regime should be on the market for characters that fans can rally around. Either way, all of these players provoke nostalgia for eras of success that we can only hope will return soon. 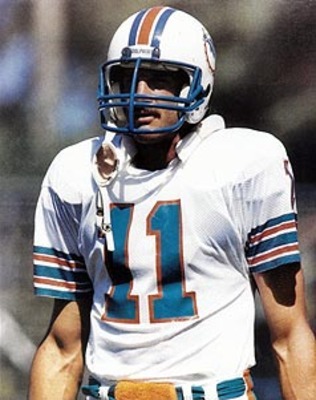 In the 1981 NFL draft, the Dolphins spent their 11th-round draft pick on a since-deceased breed of football player—a Boston University Terrier. Miami selected former BU football star Jim Jensen in the 11th round.

Jensen quickly established himself as an Antwan Randle El-esque player. He was a regular special teams ace but also appeared regularly at running back, wide receiver and occasionally at quarterback. Jensen had the kind of versatility and scrappiness that made him a natural favorite for 'Fins fans. 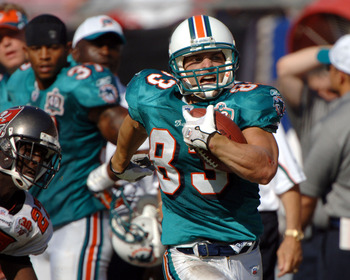 Wes Welker's stint with the Dolphins was short, but his impact on the fanbase was evident in the outrage that ensued his trade.

The undersized, stocky receiver and return specialist scored only one touchdown in two seasons for the 'Fins, but he brought an irreplaceable passion and toughness that made him an immediate fan favorite. 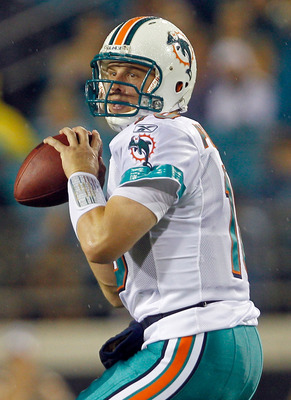 Chad Pennington had to fight to earn the respect of Dolfans after a much-maligned career with the New York Jets. Many were reluctant to embrace the oft-injured quarterback, but once he buckled his chinstrap and got onto the field, he was immediately beloved.

Although he started only one whole season for the Dolphins, Pennington led the biggest turnaround in NFL history, resurrecting the Dolphins from an NFL worst 1-15 record to an AFC East best 11-5. He has made such an impression on the city of Miami that many have called for him to stay with the team in a coaching capacity. 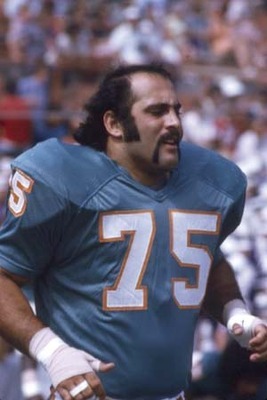 Manny Fernandez was one of the many rag-tag, blue-collared players on the Miami Dolphins 1970s championship teams, but his play was nothing short of elite. He is representative of an era of Dolphin players who had a job in the offseason but played with unrelenting passion.

Fernandez was never elected into a Pro Bowl or a First Team All-Pro team, but clearly, he deserved more praise than he received. 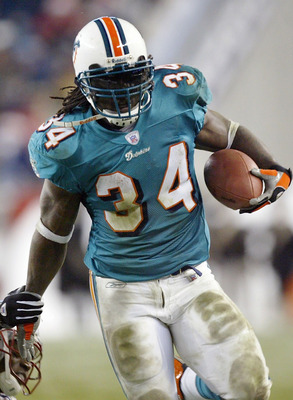 Before Ricky Williams fell victim to his appetite for marijuana, he was a beloved sports figure in south Florida. "Run Ricky Run" mania swept through Miami as Ricky and his dreadlocks literally carried the Dolphins into the playoffs.

In his first two seasons with the 'Fins, Ricky rushed for a combined 3,225 yards and 25 touchdowns. However, the scary part, and a possible reason for his early retirement: 774 combined carries over two years.

Miami's deep-rooted love for Ricky became evident when fans accepted him back with open arms after his hiatus from football. Even though his relationship with the Dolphins has been love-hate, he might deserve a spot on the Ring of Honor when all is said and done. 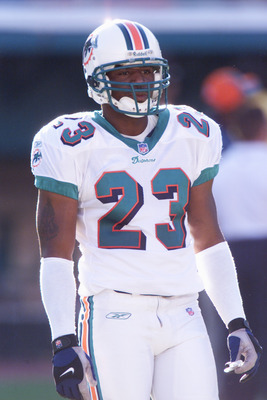 For back-to-back NFL drafts in 1997 and 1998, the Dolphins possessed the 44th overall pick. In '97, Jimmy Johnson scooped up Sam Madison. Then, in '98, Johnson completed a secondary that would morph into an elite one by drafting Patrick Surtain.

Surtain became half of one of the best cornerback tandems in the NFL from the late 1990s into the early 2000s. The former Southern Mississippi Golden Eagle notched three Pro Bowl and one First Team All-Pro bid during his days in Miami. 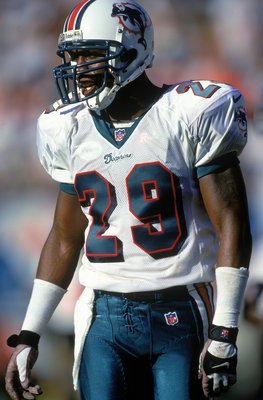 Teaming up with Patrick Surtain for the better part of his 12-year career, Sam Madison became one of the NFL's most staunch lockdown cornerbacks. In his prime, Madison might have been the league's best cornerback, playing his way onto four Pro Bowl and two First Team All-Pro rosters from 1999 to 2002.

Madison ended his Dolphins career with 31 interceptions, placing him third in team history behind Dick Anderson and Jake Scott. 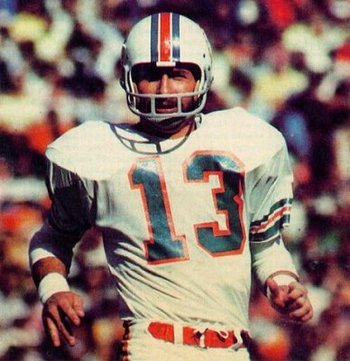 Jake Scott's famously quiet and secluded personality may have rubbed some fans the wrong way, but most seem to hold the 1972 Super Bowl MVP in the highest regard.

From 1971 to 1975, Scott made five consecutive Pro Bowl appearances and earned a spot on the 1973 and 1974 All-Pro First-Team rosters, as well as the 1972 and 1975 All-Pro Second Team. But his biggest feat came in 1972 when he was named Super Bowl MVP in the Dolphins' perfect-season-capping win over the Washington Redskins. He intercepted two passes during the game. 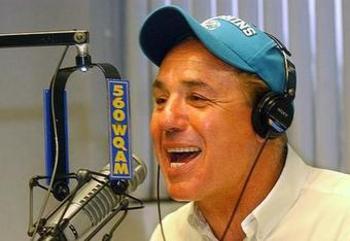 Before Jim "Mad Dog" Mandich became the face of Dolphins broadcasting, he was Miami's primary receiving tight end for both the 1972 and 1973 Super Bowl champion teams.

Although he will be remembered more for his radio voice than his role on those championship squads, Mandich was a profoundly huge figure in Miami. Sadly, Mandich passed away in April, but his signature "Alright Miami" calls will forever ring throughout Sun Life Stadium. 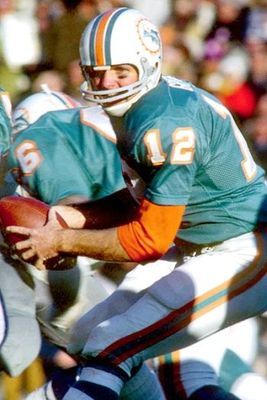 Bob Griese has always been a fan favorite in Miami, but now that the Dolphins are in the midst of a quarterback quagmire, his career and stature are only further cherished.

Griese is arguably the most decorated player in Dolphins history. He has two Super Bowl rings, six Pro Bowl selections, two AFL All-Star selections, two First Team All-Pro selections and a spot in the NFL Hall of Fame to his name. The Dolphins also retired his No. 12.

No. 5: The Marks Brothers 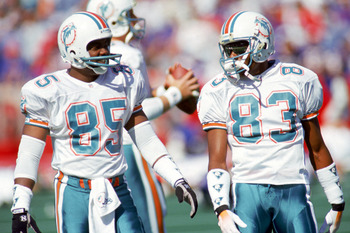 Thankfully, we never have to answer this question because Mark Duper and Mark Clayton teamed up to create one of the deadliest wide receiver duos in NFL history. Combined, Duper and Clayton caught 140 touchdown passes, and both are enshrined in the Ring of Honor. 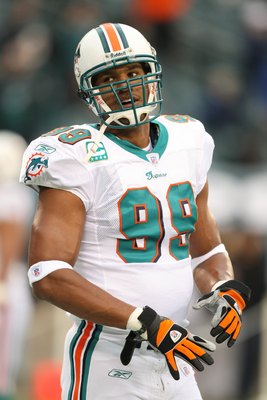 Jason Taylor anchored some of the greatest defenses in both Dolphins and NFL history with his unique blend of power, technique and speed that allowed him to terrorize quarterbacks for 12 years. He was the heart and soul of countless Dolphins teams, and while he slept with the enemy for a season, his legacy will be only temporarily tarnished.

J.T.'s 124 career sacks not only gives him the most in Dolphins history, but it doubles Jeff Cross' second-place 59 sacks. Taylor is a mortal lock for the Hall of Fame and the Dolphins Ring of Honor. 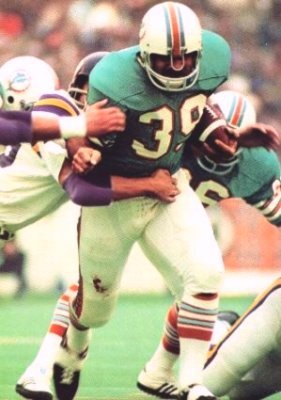 Many may have scoffed at the Miami Dolphins tropical colors back in the 1960s, but Larry Csonka quickly erased any negative notions about the team. He was a brutal runner who played with a complete disrespect for his body. Ultimately, Csonka defined an era of Dolphins football.

The Dolphins selected Csonka out of Syracuse with the eighth overall pick in the 1968 draft, and the rookie quickly showed that there was no learning curve necessary. After posting two solid years to kickoff his career, Csonka was elected into five straight Pro Bowls from 1970 to 1974, also earning two First Team All-Pro selections. 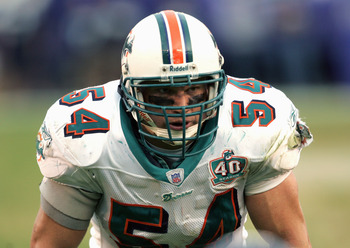 Zach Thomas is truly everything a franchise desires from a player. He was an absolute class act and will always be remembered as the consumate Miami Dolphin.

Thomas was a diamond in the rough and maybe the biggest draft steal in team history. Selected in the fifth round of the 1996 NFL draft, he wasted no time in establishing his dominance in the pro ranks, racking up a career high 120 tackles in his first NFL season. Thomas departed Miami with a team record 1,041 career tacklesa number that will remain intact for a very, very long time. 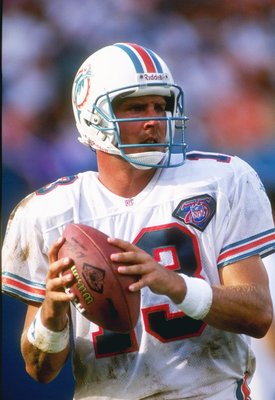 Despite concerns over his Wonderlic score and passion for football, Don Shula used the 28th overall pick in the 1983 NFL draft on Pittsburgh quarterback Dan Marino. That risk paid off, and the rest is history.

Few players have held such profound effects on an organization. Not only was Marino the team's most valuable asset for the duration of his 14-year career, but his shadow has loomed over the franchise since. Number 13 jerseys still stud the crowds of Sun Life Stadium, and until the team finds another franchise quarterback, fans will continue to cheer when Marino appears on the Jumbotron.

Although he never captured that coveted Super Bowl ring, Marino is arguably the greatest quarterback of all time—and he is the undisputed all-time fan favorite.