NFL Trade Speculation: Dealing for Kevin Kolb Is a Disaster Waiting to Happen 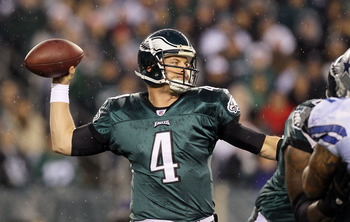 Trade rumors and speculation on his value have been circling around Kevin Kolb for months.  The Philadelphia Eagles believe they have a glut of talent at the QB position and are in a position to trade away a player they believe is worth a first and second-round draft pick.

Few players in the NFL actually carry that level of value, though.  Quarterbacks like Aaron Rodgers (27) and Matt Ryan (25) would most certainly demand at least two high draft picks.  But Kolb has done little to warrant this level of comparison.

Any trade involving a first round selection for Kolb, along with another high draft pick in 2012, would be a disaster for one of the five teams rumored to be involved.

Denver Broncos: Too Early to Give Up on Tebow 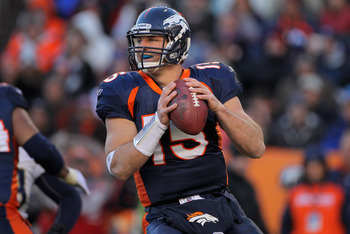 There is little likelihood that Denver would send a high draft pick for Kolb.  The organization made a big investment in Tebow, and even under John Elway's new influence it isn't likely they will make a change in 2011. 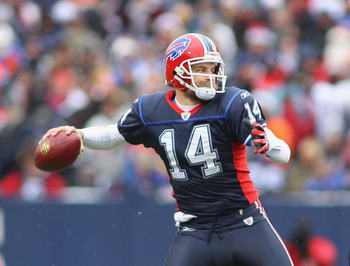 The Bills still have a variety of needs.  Quarterback is on this list, but it is unclear how high.

Fitzpatrick managed to throw for 3,000 yards on an offense with talent issues.  It is unclear if this production will carry forward to 2011, but he has at least shown enough to allow Buffalo to give him another year.  He has more experience than Kolb, and has shown just as much promise...if not more.

If Fitzpatrick fizzles this season, the Bills will likely secure a high draft pick, allowing them to acquire a quarterback in the 2012 draft.  There is talent that will be better than Kolb.

Seattle Seahawks: Waiting on the 2012 Draft 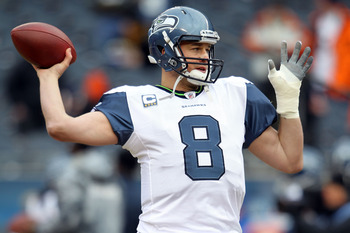 There is some optimism that Hasselbeck will be back in '11 to help the Seahawks as they look for their franchise QB in the 2012 draft.Andy Lyons/Getty Images

The Seattle Seahawks have a defined need at the QB position.  They can't expect to fare well with Charlie Whitehurst at the helm in 2011.

Then again, the Seahawks don't figure to fare that well in 2011 regardless of what available QB is under center this season.

Seattle has a difficult schedule and some holes left on their team.  Their first-round pick could be in the first 10 selections, and I find it hard to accept Kolb having that level of value in a draft with QBs like Andrew Luck, Matt Barkely and Landry Jones.  Even Nick Foles could be a better option in the late first or early second round.

There are free agent options that will help Seattle get through the 2011 season, and possibly through 2012.  If they do look at the trade route, a move to pick up Carson Palmer would involve less draft capital.

Prior to the '11 NFL Draft, I predicted Seattle would ignore the QB position.  Instead, they would build the other components of the team so they would be ready to welcome in a QB of the future in 2012.  This would leave them needing to piece together the QB position for the short run, utilizing Charlie Whitehurst and a free agent signing.  Sending a draft pick off for Kolb would make drafting a top QB in 2012 impossible. 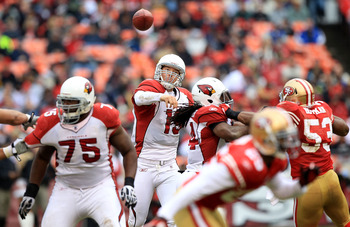 One of the most common destination rumors for Kolb is Arizona.  Many fans recall the addition of Kurt Warner and his ability to lead the team to the playoffs, and believe Kolb will do the same.

It is unlikely that Kolb is the difference in keeping Fitzgerald, and other issues with the offense make the issue even more complicated.

The most pressing need facing the Cardinals in the 2011 draft was the offensive line.  Alan Faneca (LG) has retired, and Levi Brown (LT) showed he has outplayed his effectiveness.  The RT position also had issues, as Brandon Keith and Jeremy Bridges were ineffective.

The two bright spots to the Cardinals' OL were Lyle Sendlein (C) and Deuce Lutui (RG).  However, both are free agents, rounding out all five OL positions needing to be signed.  Even if there were ample free agents to fill the void, and the pickings are slim this year, the larger issue of continuity will hinder the Cardinals' offense in 2011.

Despite the Cardinals building a strong defense, the team is likely going to suffer through a rough season in 2011.  Their issues on offense could lead to a top-five pick in the -+2012 draft.  It figures to be a talent-rich draft, and trading their pick in the blind should trouble the Cardinals.

The last consideration is the promise of John Skelton.  It is uncertain if he will develop into a franchise QB, but the same uncertainly surrounds Kolb.  The Cardinals should look for a free agent to step in and help Skelton develop.  Marc Bulger is the likely target.  Based on his presence and the development of Skelton, the Cardinals can determine their long-term needs at QB in the next draft. 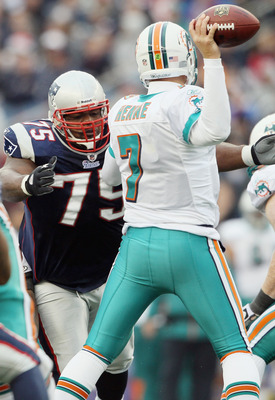 Chad Henne may not be the long term option, but he may need to hold the reins for one more year.Elsa/Getty Images

The team that might have the most need for Kolb is the Miami Dolphins,  If they feel they are ready to make a run to the playoffs, and need a QB with a little experience, Kolb could be their best chance.

But this team still has some development ahead of them.  They could be surrendering a high draft pick in 2012; as long as the asking price includes a first round selection, the Dolphins should avoid a trade for Kolb.

Philadelphia Eagles: Trading Away Their Future? 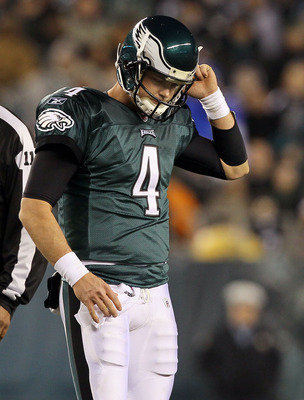 Moving to the bench has been frustrating for Kolb; he'd like to be starting.Jim McIsaac/Getty Images

If Kolb develops into the type of player Andy Reid claims he is, then it will be the Eagles that made a major mistake.  Michael Vick is certainly their best option to win now, but how long will that last?  His style of play makes him an injury risk, and the affect from the beatings he took last season showed during their playoff loss.

The Eagles need a viable backup QB to step in if Michael Vick gets hurt again.  Also, at age 31, Vick doesn't have that many seasons left in him.  If Reid had an elite QB in his stable, parting ways with him seems like a huge mistake.

It is more likely the Eagles realize Kolb isn't an elite franchise QB.  They are willing to trade him away, placing their faith in Vick for the present, and using their acquired draft picks to build the position for the future.  If they are so willing to part with him, teams in need of a QB should be wary.

Looking at Kolb's numbers does little to convince me he is anything but an average NFL QB.  Matt Ryan showed more as a rookie than Kolb has shown to date.  Aaron Rodgers is far ahead of where Kolb stands as well.

Even comparing Kolb's statistics to Matt Hasselbeck's first four seasons leaves Kolb wanting.  It is hard to argue Hasselbeck had a better supporting cast; his offensive line was simply bad his first two years in Seattle, and he lacked the talent Kolb has at the WR position.

Following is where Kolb and Hasselbeck each stood after four years, along with Ryan after his first three.

Hasselbeck turned into a solid QB for Seattle, but talk of two early draft picks never entered the equation for his services.  Neither should they with Kolb.