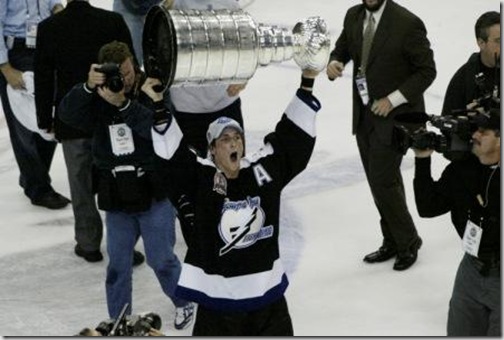 Saturday, the Tampa Bay Lightning continue their quest for the 2011 Stanley Cup when they head to Boston to take on the Bruins in Game 1 of the Eastern Conference Finals.

We thought it would be a great opportunity to look back at some of the greatest goals in Lightning Playoff History.

While the Lightning should hopefully add to many of these highlights in the Conference Finals and maybe bump some of these goals off the list—for now, we feel these are the best in Tampa Bay history.

We want your feedback...did we miss any? Do you have a different ranking? Let us know!

The Tampa Bay Lightning completed the greatest rally in their short playoff history, coming back from the brink of elimination against the Pittsburgh Penguins down 3-1 to win Game 7 in the 2011 Eastern Conference Quarterfinals.

In what was a goalie duel, Sean Bergenheim managed the only goal of the game at the 5:41 mark of the second period.

The goal was reminiscent of a play that Dominic Moore and Bergenheim connected on in Game 6, where Moore circled behind the net appearing to be headed to the other side and getting Pens Goalie Marc-Andre Fleury to follow. He then darted a no-look pass back to Bergenheim on the other side for a "look what I found" open netter.

"We have been practicing that play a little bit for this series," Bergenheim told the Associated Press, "Moore just made two great passes on those two goals that we scored."

It was the goal that sent the Tampa Bay Lightning to the Stanley Cup Finals...although he didn't know it at the time.

Lightning winger Fredrik Modin grinded in front of the Philadelphia Flyers net and pounded in Tampa Bay's second goal of the game just 4:57 into the second period to give the Bolts a 2-0 lead in Game 7 of the Eastern Conference Finals.

The Lightning would try to hold on as wave after wave of Flyer rushes came at them.

Eventually, Philly would edge closer midway through the second period with a Kim Johnson goal.

Tampa Bay's Nikolai Khabibulin would hold down the fort, Modin's goal held up and the celebration would begin...the Lightning would play for the Stanley Cup!

The Tampa Bay Lightning looked to close out their series with the NY Islanders, and who else but Martin St. Louis would give them the game winner?

The hockey game slipped into overtime after a puck directed in from a skate behind Nikolai Khabibulin.

An Islander turn over at the blueline would result in St. Louis skating in one-on-one with the New York netminder. He had no chance as St. Louis rocketing a shot over his shoulder for the winner.

Lightning advance to the second round for the second time in franchise history. 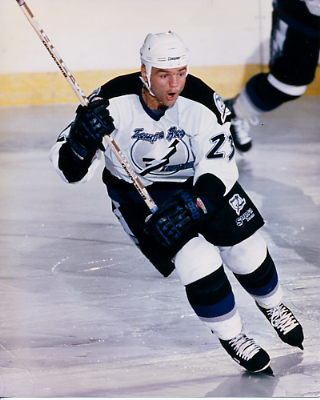 Tampa Bay was in its first playoff series in franchise history against the rugged and highly favored Philadelphia Flyers.

After getting utterly destroyed 7-3 in Game 1, Tampa Bay was feisty in Game 2, as Alex Selivanov's third-period goal forced the game to overtime tied at 1.

It would set up the Lightning's first playoff victory. Lightning forward Brian Bellows scored at the 9:05 mark of overtime and send the stunned fans of the top seeded Flyers home in disbelief.

After beating the Capitals in Game 1, everyone expected Washington to come out guns blazing in Game 2 of the 2011 Eastern Conference Semifinals. A win by Washington steadies the ground, a loss would be devastating.

Tampa Bay appeared to have the game, but a late goal by Washington superstar Alex Ovechkin put it into overtime.

Vinny Lecavalier would bring on the devastation.

A bad change cost the Caps as Teddy Purcell and Lecavalier skated in on a two-on-one. Purcell got the puck to Lecavalier who roofed it over goaltender Michael Neuvirth for the overtime game winner.

For the longest time, Alexander Selivanov's overtime game winner in Game 3 of the 1996 Eastern Conference Quarterfinals would be at the tops of this list.

In front of 25,945 fans in the dome currently know as Tropicana Field (home of the Rays), the Flyers and Lightning thrilled the NHL playoff record crowd (which would be broken again by the Lightning in Game 4) by battling to a 4-4 tie headed into overtime.

The Lightning's play-by-play voice, Larry Hirsch, nervously relayed a story about his wife telling him that Brian Bellows would get the O.T. game winner in Game 2. Sure enough, Bellows did. Hirsch called his wife again and she said, "Don't worry, Selivanov will get the game winner." Hirsch then said, "If she's right, I'm taking my wife to Vegas."

What followed was magic for the Tampa Bay Lightning fans as Selivanov put in a rebound to seal the Game 3 victory and a 2-1 series lead for the Bolts over the top-seeded Flyers.

Unfortunately for the Bolts, it would be the last playoff win they had for awhile as Tampa Bay would lose three straight to fall in the series 4-2. 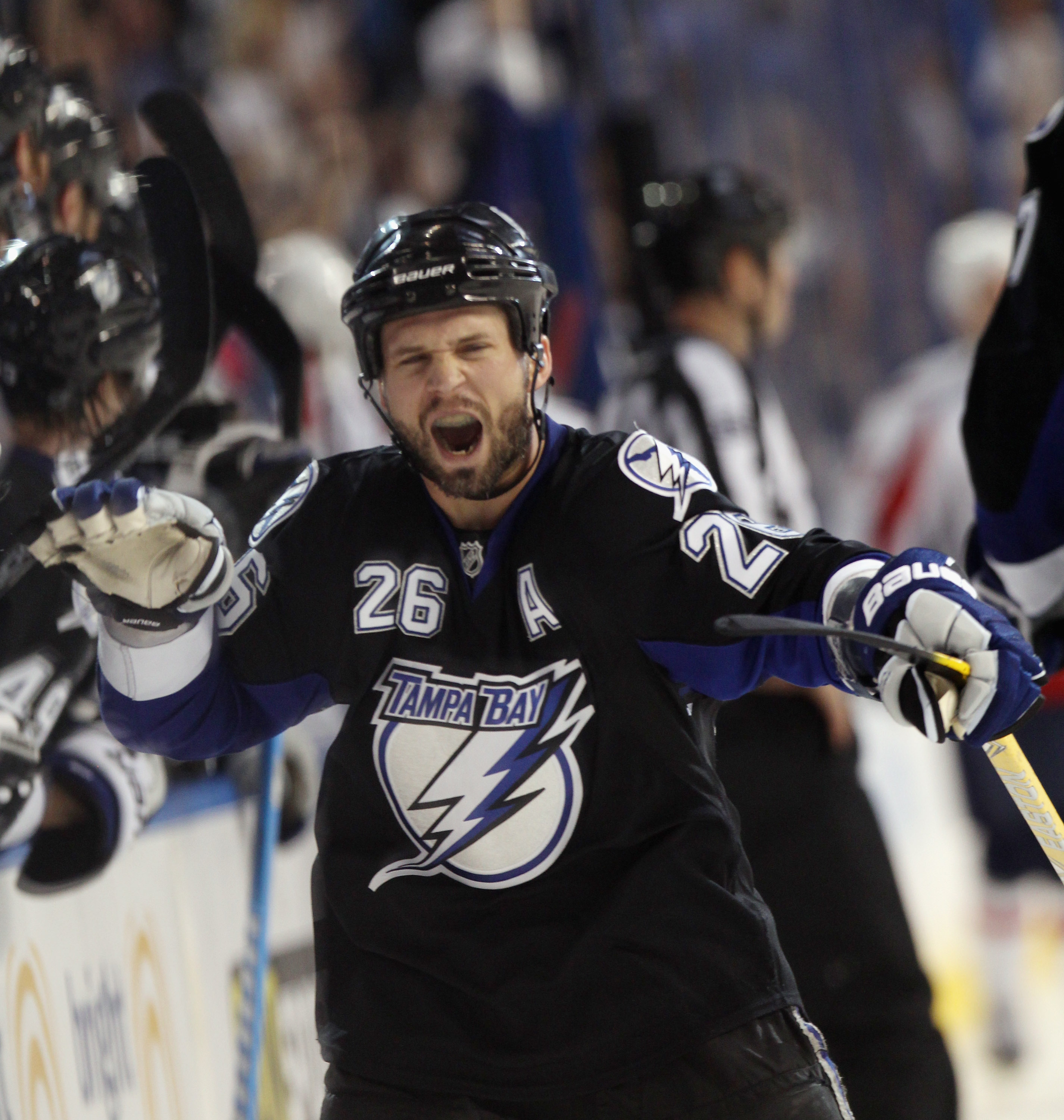 St. Louis wins the series for the Bolts!Bruce Bennett/Getty Images

If there's one thing you can count on from Martin St. Louis, it's playoff overtime goals.

Until the 2002-2003, the Tampa Bay Lightning had never won a playoff series. It started out poorly for the Lightning in their series against Washington, as the Lightning lost the first two games of the series at home.

Tampa Bay rallied, winning three straight and having the Caps on the brink.

With 4:06 left in regulation of Game 6 of the Eastern Conference Quarterfinals, Lightning Captain Dave Andreychuck tied the game and sent it into overtime...where it would sit for two full OT periods.

With 4:03 into the third overtime, St. Louis would score the first of his big overtime goals for the franchise.

As a young kid, you dream of the moment. Game 7 of the Stanley Cup Finals, the puck on your stick, you fire it, it goes in...game WINNER!

For Ruslan Fedetenko, he played the game of his life in Game 7 of the 2004 Stanley Cup Finals. After scoring on the power play in the first period, Fedetenko watched as Vincent Lecavalier mesmerized every one on the ice with some unbelievable moves and then fed the puck to Fedetenko, who fired it in to give the Bolts a 2-0 lead.

It would end up being the game winner as the Lightning scrambled to hold on after Craig Conroy scored a goal midway through the third to pull within 2-1.

It took an unbelievable save by Khabibulin on Calgary's Jordan Leopold to preserve the Stanley Cup and Feds' game winner...but in the end, Fedetenko was the hero and the Lightning held the holy grail aloft.

In Game 3 of the 2004 Eastern Conference Semifinals, the Montreal Canadiens were just seconds away from climbing back into the series against the Tampa Bay Lightning.

Failing to get the puck down the ice to secure the victory, it squirted toward Vincent Lecavalier, who seemingly had no chance at getting his stick on it for a shot.

Then the unbelievable happened.

Lecavalier stuck his stick between his legs and deflected the puck past goalie Jose Theodore to tie the game with 17 seconds left.

In the overtime, Brad Richards would end it and the Lightning would take a commanding 3-0 series lead.

It remains one of the greatest goals I've seen and if not for the next one, it would have been No. 1 on any list.

The Cup was in the house. All of Canada could taste it. The parade route had been mapped out, the T-shirts were being made. All that remained was for the Calgary Flames to dispatch the Tampa Bay Lightning in Game 6 of the Stanley Cup Finals.

Brad Richards would put the Lightning up twice in the game, but each time the Flames fought back. The Flames thought they had a crucial goal in the third period when the puck dallied ever so close to the goal line. It was close, but there was no review and the game remained tied at two.

It stayed that way until the second overtime, when Martin St. Louis ruined the party with a rebound goal.

It wasn't beautiful. St. Louis has certainly had prettier goals in his time here with the Lightning...but no goal in the history of the Tampa Bay Lightning was bigger than that one that broke the will of the Flames.