Manny Pacquiao and the 5 Best Left Hooks in Boxing History 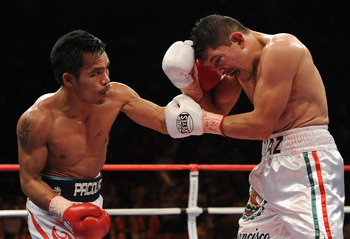 The left hook had been the favorite punch of Rocky Balboa, not to mention many great, real-life boxers, too.

It's a beautiful thing, if done right. The timing, accuracy and speed of a left hook can combine to produce a key knockdown or a brutal knockout—it can be a boxer's best friend.

Orthodox fighters often use it as a lead hook, while southpaws love to set up that powerful left hook to finish an opponent off.

If a list was to be compiled, who would register the five greatest left hooks of all time? No two lists would look the same, to be sure.

Even so, here is what I came up with. The list starts at the top and goes down.

1. Joe Frazier Drops Ali in the Last Round of Their First Fight

Ali's legs had somewhat left him as he returned to the ring in 1971 to face the champion, "Smokin'" Joe Frazier.

It was a back and fourth absolute barnburner, which Frazier sealed when he floored Ali in the last round.

Joe would go on to lose their second and third meetings, but he won perhaps the most important of the three—The Fight of the Century.

2. Sugar Ray Knocks Gene Fullmer Down and out

Sugar Ray Robinson is known as being one of the most feared men in boxing for 20 years. This is just one reason for that reputation.

One fun fact that some people might not be aware of is that Robinson was undefeated as an amateur boxer with an 85-0 record, including 69 knockouts, 40 of which came in first rounds.

3. Manny Pacquiao Sends Ricky Hatton to the Canvas for Good

I'd been one of the many people that thought Ricky Hatton had a chance, but Manny made him look off the pace and simply stormed right through him.

I doubt many people thought he could take care of him so easily—check out the awesome left hook that ended the fight!

Mike Tyson should have hung up the gloves after his loss to Lennox Lewis, but two years earlier he still looked tough as nails—his power, killer instinct and craziness mixed in as usual.

Tyson was always very tough early on. However, if you could drag him into the deeper water, you could sink him.

Having said that, this left hook halted any such plans that Lou Savarese may have had.

Morrison's career has certainly been a controversial one.

He's had his positive, not positive, maybe positive tests for HIV, but his talent could never be ignored.

Here, he proved that the power behind his left hook could turn the lights out on any heavyweight if he could land it flush.