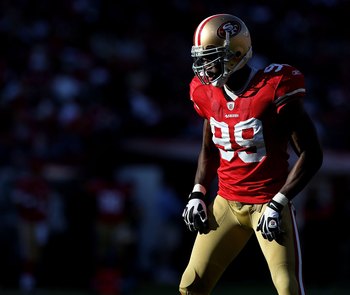 The New York Giants didn't strike out in this year's draft when it comes to finding a linebacker for next season because they never even stepped up to the plate.The Giants almost completely disregarded the need for a linebacker, and didn't end up drafting one until the middle of the sixth round.

With a less than impressive showing last season by Keith Bulluck, Jonathan Goff and Michael Boley, the Giants could possibly look to free agency to fill the holes that sit in between the revamped secondary and ferocious d-line.

With free agency yet to begin, and a new CBA still undetermined, let's take a look at the possible targets on the New York Giants radar.

Kyle McMorrow, a Correspondent for Bleacher Report, is a freelance writer and news production assistant for 1010 WINS Radio in New York City. He has also worked for the Big Ten Network and ABC-TV in New York City. Kyle McMorrow has interviewed numerous prominent athletes, such as Larry Fitzgerald, Eli Manning and LaDainian Tomlinson.Twitter: @Kyle_McMorrow 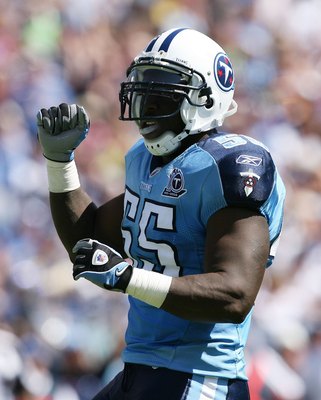 The name on most fans' tongues has been Stephen Tulloch of the Tennessee Titans. The five-year pro has increased his total tackles every year, and his 160 tackles this past season was only second in the league to linebacker Jerod Mayo of the New England Patriots.Tulloch also improved his pass defense this past season, catching an interception and deflecting six passes.

Aside from his impending free agency, Tulloch seems expendable now more than ever after the Titans drafted two linebackers in the first four rounds. Outside linebacker Akeem Ayers and Inside linebacker Colin McCarthy were taken in the second and fourth rounds respectively, and could be a hint as to Tennessee’s idea for the future at linebacker.

The New York Giants could use a reliable tackler at linebacker, as their top two tackling contributors last season came from the secondary in Terrell Thomas and Antrel Rolle. If the Giants are going to win it all again, they'll need a linebacker who can record over 100 tackles like Antonio Pierce did for Big Blue during their Super Bowl run. 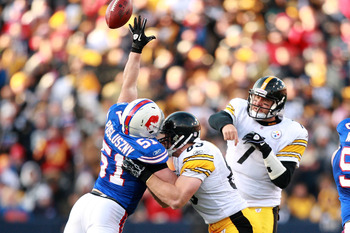 Graduate of Penn State's Linebacker U, Paul Posluszny was touted as one of the best linebackers to come out of college in 2007, however injuries have slowed the former Nittany Lion over his four year career.

In 2007, he broke his left forearm forcing him to miss most of his rookie year. In 2008, Posluszny reminded everyone of his talent at middle linebacker, as he registered 129 total tackles, a forced fumble and an interception. Throughout his 2009 and 2010 season, Posluszny was set back by injuries once again, including another broken arm in Week 1 of the 2009 season.

While he may be injury prone, there is no denying he has a wealth of talent. Although he only appeared in 12 games in 2009, Posluszny racked up over 100 total tackles, 87 of them solo, to go with three forced fumbles, three interceptions and one sack.

In 2010 he finally broke the century mark in solo tackles with 103 in 14 games. When he's been healthy enough to play, Posluszny has been a very important part of the Bills defense, however Buffalo has not stayed content with his production. The Bills drafted inside linebacker Kelvin Sheppard in the beginning of the third round, perhaps bracing for Posluszny's departure. Linebacker Chris White was drafted in the sixth round, and is expected to compete for a backup spot immediately.

If the Giants are feeling chancy, they should roll the dice on Poz, because the risk is very much worth the reward when compared to what the Giants were working with last season. 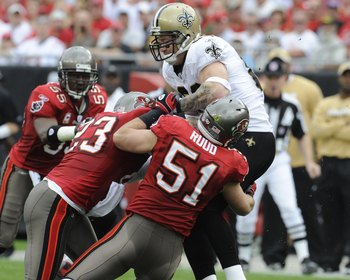 Outside of Tulloch, Tampa Bay Buccaneers Linebacker Barrett Ruud is the next best thing to a sure-fire banger on the defensive side of the football.

The Bucs' linebacker is often criticized for not being physical enough for the middle, but how can you support that argument when the numbers are yelling back in disagreement? Ruud has registered four straight seasons of over 100 total tackles, and while some may argue he is not aggressive enough, the Giants defensive line makes up for that ten-fold.

His lack of sacks, only five in his six year career, has led to many saying he is soft, however that is not the case at all. The Bucs linebacker does just what his defensive scheme allows him to do, as the middle linebacker plays more of a pass defense rather than a backfield rusher in the Tampa Bay system. Bucs head coach Raheem Morris has constantly come to Ruud's aid, stressing his sack numbers, or lack there of, is a result of the defensive scheme not the player.

With Tampa Bay drafting Mason Foster in this year’s draft, combined with Ruud's possible unrestricted free agency status, the Bucs may be leaning towards wishing him the best and moving on. If so, The Giants would be a perfect fit for Ruud to set career numbers, as he can step in behind an already fearsome defensive line and shine. 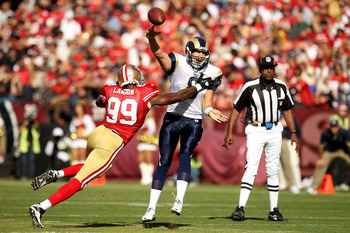 Since harping on tackling may be getting old by now, Manny Lawson is here to switch it up. The San Francisco 49ers linebacker may not be the tackling machine some of the others may be, but his coverage ability and speed make him a dangerous threat for opposing quarterbacks.

The Giants love athletes, just guys who can flat out perform in and out of their comfort zones, and Lawson has the physical attributes to be that player.

If the Giants felt comfortable enough to play Mathias Kiwanuka all over the field, Lawson will be an every down player, playing everything from linebacker to defensive end, as New York loves speed rushers on the line.

Lawson just reeks of what the Giants look for in a defensive player, so a match made in heaven could be an understatement. 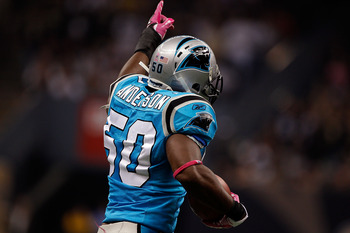 James Anderson is definitely the wild card of the bunch.

In 2010 Anderson broke out of mediocrity and put together a very impressive year. The Atlanta Falcons linebacker totaled 101 solo tackles, 3.5 sacks, two forced fumbles and one interception. These numbers are a sharp contrast to his previous season, as his combined number of tackles never even came close to the solo amount he racked up in 2010.

At 28 years old, he could have reached his peak, or he could have just had a lucky season. At this point, the Giants need reliable talent, and Anderson could be a reach at best.