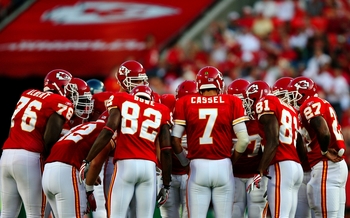 The Kansas City Chiefs 2011 NFL schedule was released November 19th, and no one was surprised the Chiefs are slated to face much stiffer completion in 2011.  This increase in competition will mean that the Chiefs players, particularly the starters, will have to come ready and prepared when the season starts.

The 2011 NFL Draft saw the Chiefs draft several talented players that will fill several positions of need the Chiefs had.  The draft included Jon Baldwin filling the No. 2 wide receiver position; Jerrell Powe filling the much needed nose tackle position; Rodney Hudson bringing some youth to an aging offensive line; and Justin Houston possibly filling the outside linebacker position opposite of Tamba Hali.

When it comes to figuring out the Chiefs' depth charts come opening day of the 2011 NFL season there is a lot to consider.  Whether the season starts on time or four weeks late, one thing is becoming clear due to the lockout, the free agent period will close to non-existent in 2011.

If the free agent period is cut short, or does not happen at all, that means team will be scrambling to fill their needs.  Luckily for the Chiefs most of the key players, and key positions, are already on the roster and under contract.  This makes the task of predicting the Chiefs starters in 2011 a little easier than other NFL teams with several positions still in question. 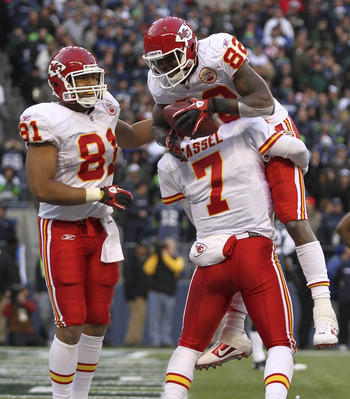 It is believe by some that Brodie Croyle’s time on the Chiefs' roster has come to an end.  Considering the fact that Ricky Stanzi was selected in the fifth round of the NFL Draft I would say this is a foregone conclusion.

1. Matt Cassel – Last season Cassel dramatically improved his statistics, including completion percentage, total yards, yards per attempt, yards per game, touchdowns and interceptions.  After last year’s improvement Cassel has earned himself the starting position for a few more seasons in Kansas City.  Look for 2011 to be another good season for Cassel.

2. Ricky Stanzi – As a three-year starter for Iowa, Stanzi demonstrated good ability to read coverage’s and make the right decisions.  Stanzi played in a run first offense similar to the Chiefs at Iowa, therefore he should have an easier time adapting to the NFL.  Stanzi is a smart quarterback that should have an easy time picking up the pro game and reacting to much faster defenses. 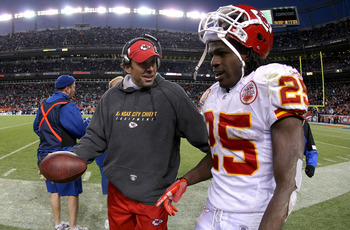 The 2010 season was filled with controversy for the Chiefs' backfield.  While Jamaal Charles averaged a staggering 6.38 yards per carry he still did not touch the ball as much as Thomas Jones.

1. Thomas Jones – Todd Haley is going to start the 2011 season with that same controversy.  I believe Charles will eventually get the start, but Haley loves Jones and will use him as much as he can before he wears out.

2. Jamaal Charles – By far the best running back the Chiefs have; look for Charles to receive between 15-18 touches a game.  Charles will be as electric as ever in 2011 and will be near the top of the league in average and total yards by the end of the season.

3. Jackie Battle – The Chiefs did not draft a developmental running back to eventually take over Jones’ position.  This leaves Battle, who is a great short yardage back, as the third-string running back entering 2011. 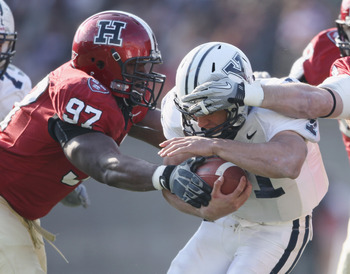 1. Shane Bannon – Bannon stats at Yale are nothing to impressive, but he did start at fullback every game his last two seasons.  That experience leading halfbacks through holes could prove vital in the Chiefs' zone-blocking scheme.  Bannon has size and speed advantage over Mike Cox, so he should have no problem earning the starting spot during training camp.

2. Mike Cox – Cox has been with the Chiefs since he graduated from Georgia Tech three seasons ago.  Expect Cox to remain on the roster in the same role he had last year as the No. 2 fullback. 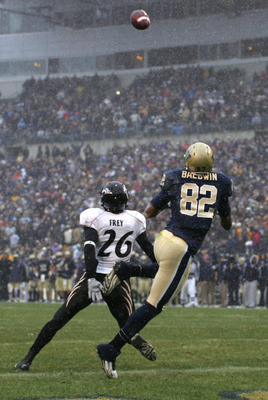 2. Jon Baldwin – Standing at 6’5” and 230 pounds with a vertical leap of 42 inches, Baldwin will be one of the Chiefs' main threats in the red zone.  Baldwin has exceptional hands and should help the Chiefs' wide receivers eliminate a lot of the dropped passes that occurred in the prior two seasons.

Baldwin is working out with Bowe and Larry Fitzgerald this offseason and we all saw the transformation that took place in Bowe after an offseason with Fitzgerald.  Additionally, it has been rumored that Baldwin will be staying with Matt Cassel for a few weeks to help gain an understanding of the playbook and routes.

3. Dexter McCluster – Dex had a rough, injury filled, rookie season for the Chiefs in 2010.  Look for Dex to adjust to the physicality of the NFL game and bounce back strong in 2011.

4. Kevin Curtis – The Chiefs were so bad off at wide receiver that Curtis was signed off the street right before a playoff game and played most of the snaps.  Pioli would not have signed Curtis for just one game.   Curtis is a proven veteran in the NFL and should have a decent season in Kansas City.

5. Verron Tucker – In Week 9 of last season Tucker made one of the best touchdown catches of any Chiefs receiver for the whole season.  The problem was that Tucker never seemed to get on the field after that.  I would imagine Tucker has a few more touches this season. 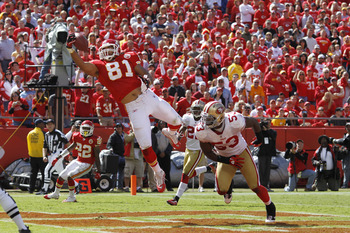 The Chiefs had a rather unexpected surprise development for them at tight end last season.  That surprise was Tony Moeaki.  Moeaki made some absolutely amazing catches for the Chiefs in 2010, and many Chiefs fans are hoping the he will emerge as the next great Tony in Kansas City.

1. Tony Moeaki – Last season Moeaki emerged as a legitimate offensive threat out of the tight end position for the Chiefs.  Moeaki was the Chiefs' second leading receiver with 47 receptions for 556 yards and three touchdowns.

2. Leonard Pope – Todd Haley brought Pope in from Arizona, and he's still here, so obviously he does something the Chiefs' head coach likes.  Pope is a monster, standing at 6’8” and 265 pounds, and will always be a threat in the red zone.   In 2010 Pope had only 10 receptions for 72 yards, but had two touchdowns. 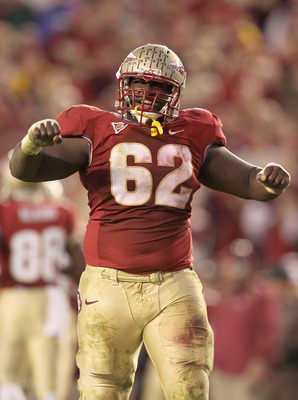 Will Hudson compete for a starting role in 2011 for the Chiefs?Mike Ehrmann/Getty Images

The Chiefs' offensive line play improved dramatically in 2010 compared to 2009, the problem was that most of that improvement came from aging players towards the end of their career.  Luckily the Chiefs addressed the aging offense line in the last two drafts by selecting Rodney Hudson in 2011 and Jon Asamoah in 2010.

LT: Brandon Albert – The talk of moving Albert to RG or OG has been going on for three seasons now and yet he is still there.  Albert can handle the role and will remain in the position.

LG: Brian Waters – The former NFL Man of the Year is a great offensive lineman.  This starting position will remain his until he hangs them up or his contract end.

C: Casey Wiegmann – There has been speculation that Wiegmann may retire, however I believe he will be back for one more year and will produce at his usually high level.

RT: Barry Richardson – Richardson was part of a line that led the NFL in rushing last season and he only allowed 5 sacks.  While Richardson does have holes in his game, he is still young, and the Chiefs support him, evidenced by them not selecting an offensive tackle in this year's draft. 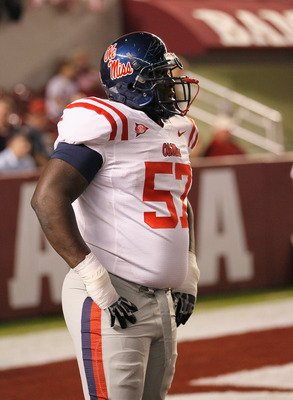 Will the selection of Powe finally give the Chiefs the NT they have been searching for?Kevin C. Cox/Getty Images

Besides the emergence of Glenn Dorsey as a legitimate run stopper, the Chiefs' defensive line remained below average in 2010.  The Chiefs addressed this issue in the draft by selecting Jerrell Powe and several DE/OLB that will be able to contribute on the defensive line.  However, the veteran players on the current roster need to step up this season and prove their worth to the team.

LE: Tyson Jackson – Most of T. Jax’s 2010 season was spent on the bench either nursing an injury or watching Shaun Smith play.  Year 3 is a make or break year for Jackson, hopefully it’s not break.

DT: Jerrell Powe – Powe is out of Ole Miss and stands at 6'2” and 335 pounds.  Powe has a huge frame and will be competing with Ron Edwards for the chance to clog up the middle of the Chiefs' defensive line.

Powe is very similar to Terrance Cody, and can sometimes get lazy toward the fourth quarter and starts playing high.  If Powe can improve his stamina he will be a force to reckon with in the middle.

RE: Glenn Dorsey – In 2010 Dorsey had 69 tackles and two sacks and emerged as the Chiefs' best defensive lineman.  Look for continued improvement from Dorsey in 2011. 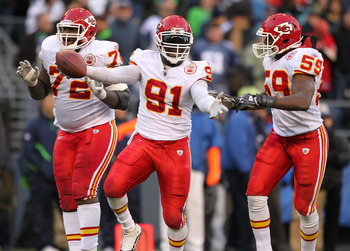 With the arrival of Defensive Coordinator Romeo Crennel in 2010 the Chiefs defense improved dramatically from the 2009 season.   Out of all the defensive groups that showed improvement perhaps no group showed as much as the linebackers.  After a heavy dose of linebacker selections in the 2011 NFL Draft, look for that trend to continue into this season.

LOLB: Andy Studebaker – With the likely departure of Mike Vrabel and the three-year contract extension Studebaker received last year, look for him to take over as starter.  Time for Studebaker to step up and prove he deserves a starting position with the Chiefs.  If Studie is unable to prove he deserves the position, don't be surprised if Justin Houston quickly takes it from him

MLB: Jovan Belcher – In 2010 Belcher compiled 84 tackles, which was good enough to be the Chiefs' third leading tackler.  While Belcher’s stats were not phenomenal, they were good enough to earn him another season to prove himself.

MLB: Derrick Johnson – After a season in Todd Haley’s doghouse in 2009, Johnson emerged as the Chiefs' leading tackler in 2010.  Johnson had a total of 121 tackles, one sack, four forced fumbles and one interception.

ROLB: Tamba Hali – Mr. Pressure, Tamba Hali had an unbelievably good 2010.  While he only had 51 tackles, Hali emerged as one of the NFL’s premiere pass rushers with 14.5 sacks. 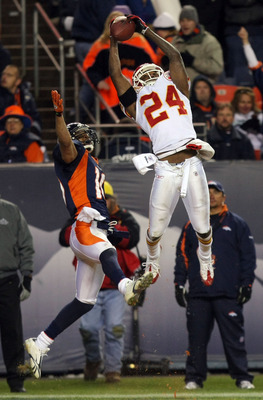 LCB: Brandon Flowers – While Flowers did not make the Pro Bowl in 2010 he did take a big step towards putting himself among the elite cornerbacks in the NFL.  Flowers compiled 65 tackles, four interceptions, and one forced fumble last season.

RCB: Brandon Carr – While Carr may not have got the attention that Flowers received last season, Carr played very good football.  Carr had 57 tackles and one interception for the Chiefs in 2010.

FS: Kendrick Lewis – In 10 starts last year Lewis compiled 30 tackles and three interceptions.  Lewis is a quick player who likes to make the big play.  With a good rookie season under his belt look for him and Eric Berry to have a great year in the Chiefs' secondary.

SS: Eric Berry – The fifth overall pick of the 2010 NFL Draft did not disappoint.  Berry was second on the team in tackles with 92.  Berry also had four interceptions, two sacks and one forced fumble.  Berry was a constant disruption in the run game.  Look for Berry to continue his path to becoming the next great safety in the NFL next season. 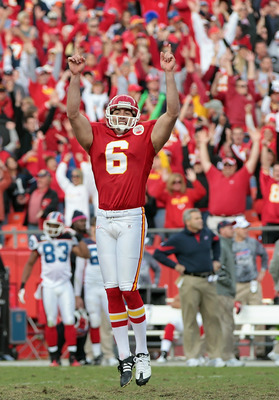 The Chiefs' special teams performance was huge in 2010.  There is no denying that overall the Chiefs have one of the better special teams units in the NFL.

K: Ryan Succop – Over the first two years of his career with the Chiefs, Succop has made 45 out of 55 field-goal attempts.  Succop is still young and improving and he could be the kicker for the Chiefs for awhile.

P: Dustin Colquitt – Consistently referred to as one of the top punters in the NFL things will not change in 2011.  In his six seasons with the Chiefs, Colquitt has only had three punts blocked and only one returned for a touchdown.

KR/PR: Javier Arenas/Dexter McCluster – These pair of returners started off the season last year on fire, but as McCluster faced injury problems the returning efforts seemed to stall.