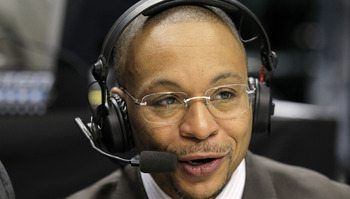 Gus Johnson and CBS are parting ways after an exciting 16 years. Johnson, who is known for his crazy, sometimes over-the-top, antics, will no longer be a part of of the March Madness broadcast.

This is a huge loss for CBS, and it is the end of an era for many sports fans who have grown up with Johnson at the helm of some of the greatest comebacks in the history of college basketball. So here is an ode to the "Law of Gus."

From the Parking Lot

"From the Parking Lot" was one of the greatest calls of all time. He really told everyone how it was.

This was Gus Johnson's first NCAA Men's Basketball Tournament, and it did not disappoint.

This is one of the best calls by Gus, but it did not happen in the tournament.

This is one of Gus's favorite phrases and arguably his best known, the pure jumper. Listen to the excitement in his voice as the shot goes in.

Johnson could make anything exciting, and this catch phrase will definitely be missed from March Madness in 2012.

When Ohio State had Greg Oden and Mike Conley on their team in 2007, they met up against Xavier in the tournament.

Needless to say, after the game was tied up as time ran out Johnson had yet another signature moment with his "Ha! Ha!" Listen for yourself.

This is by far one of the most memorable Gus Johnson calls of all time. The heartbreak city still lies within the hearts of every Gonzaga fan.

This one is not as fiery as usual but still a great one. We've got a star in the Motor City Ha! Ha! Okay so I added in the "Ha! Ha!" but it fits, doesn't it?

Another Big Time J! This highlight video just features some vintage Gus Johnson. We sure will miss this guy next March.

This video says it all!

The Runner and the Slippers

This clip features two signature Gus lines. First the runner in itself is great, but then add in "the slipper still fits," and it just makes it all that much better.