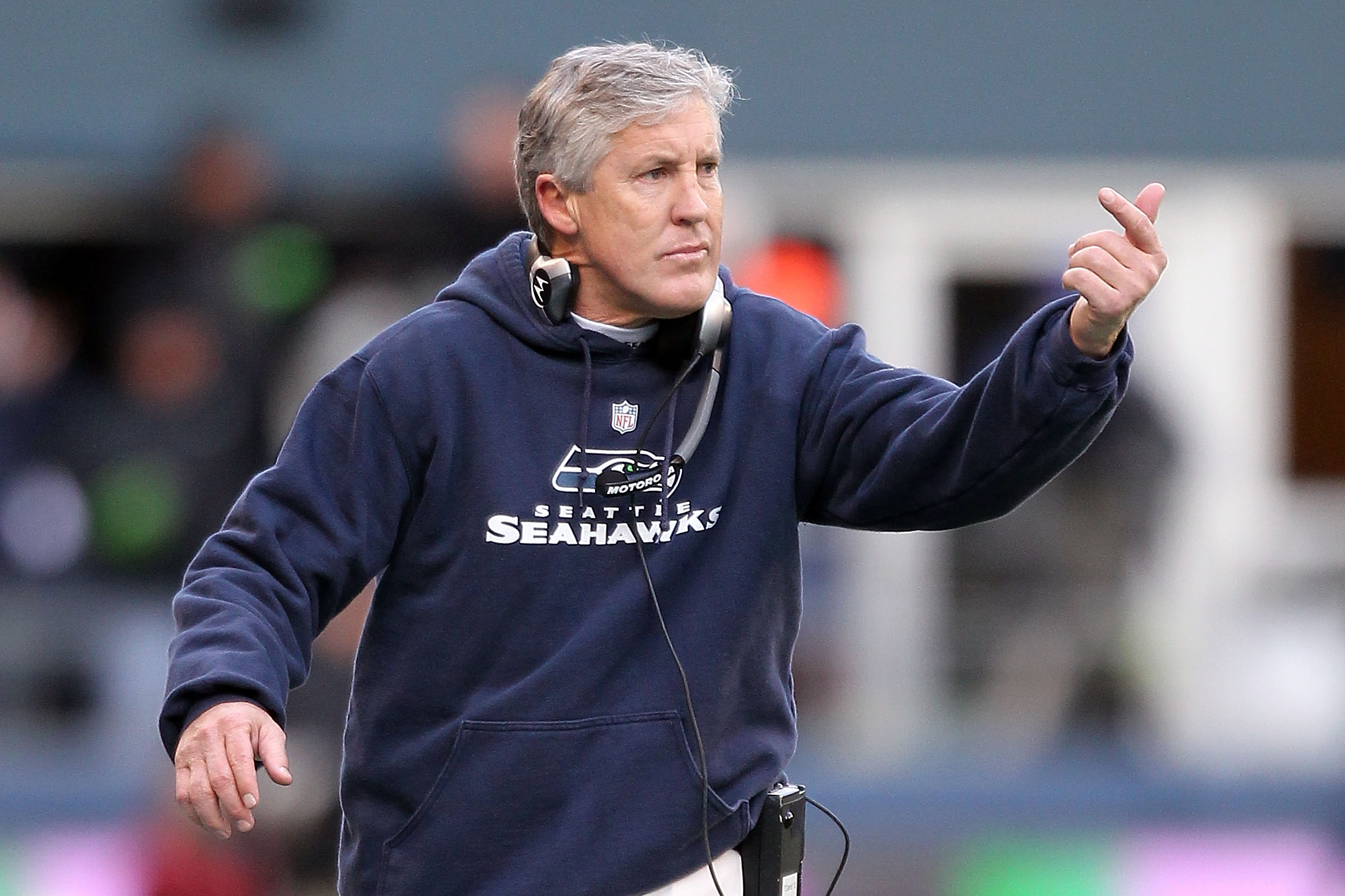 A look at 101 prospects who could potentially be the subject of a sideline lesson from Carroll in 2011.Otto Greule Jr/Getty Images

The Seattle Seahawks head into their second draft under the Pete Carroll and John Schneider regime; while still a young organization, standards are high and the organization is optimistic about the off-season coaching changes.

They hope the 2011 draft can serve as a stepping stone to building a championship roster; the 2010 draft, an easier draft for Seattle to maneuver with the No. 6 and No. 14 picks, set high expectations. There is much speculation as to what Seattle will do with pick No. 25--It all depends who is still on the board.

With the draft less than 24 hours away, It’s time to release the final Seahawks draft board. 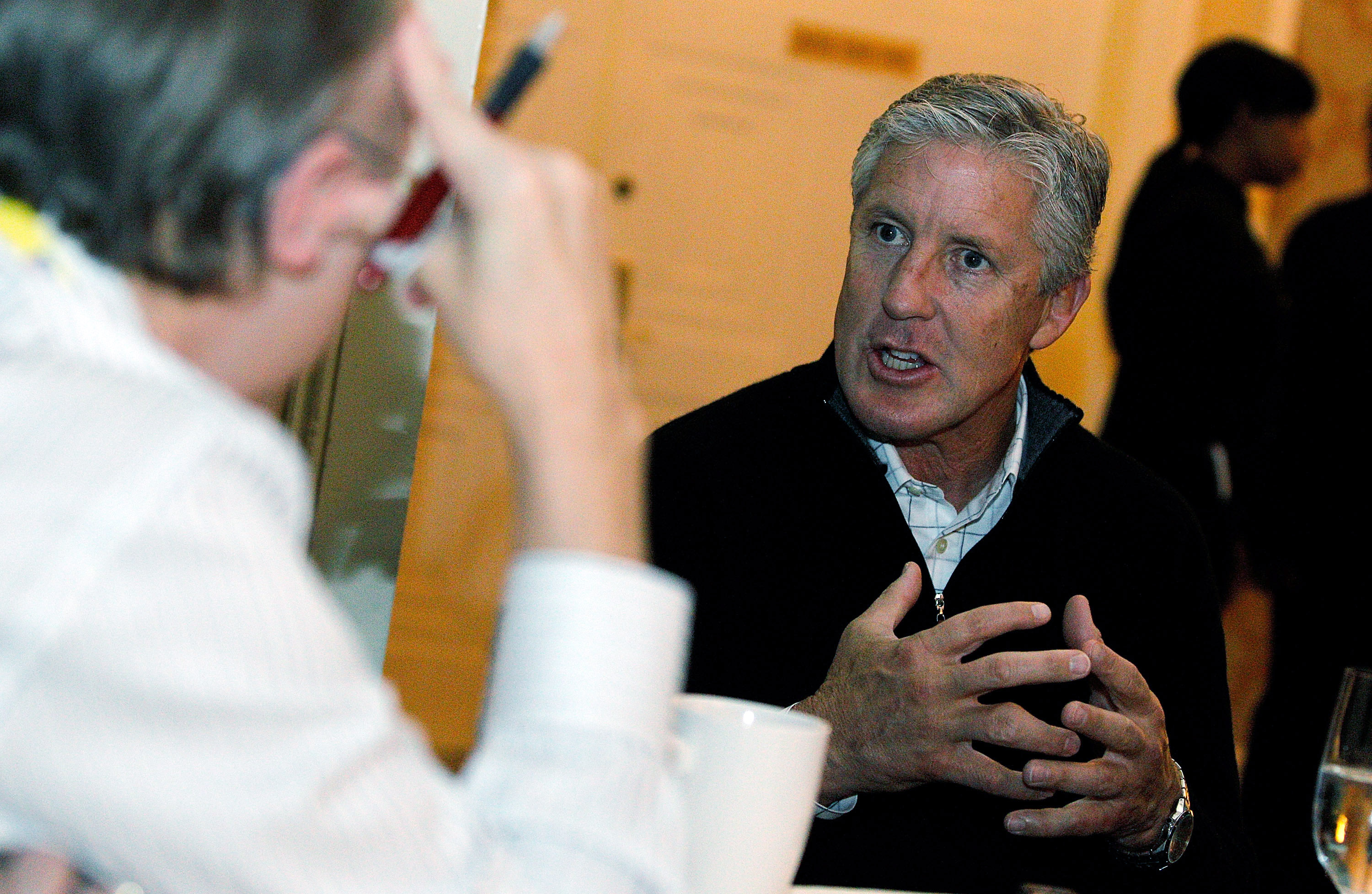 The duo sat down with the media for nearly an hour.Sean Gardner/Getty Images

Before getting into the draft board, I want to share some comments and thoughts from Carroll and Schneider’s presser on Tuesday (found on Seahawks.com).

I don’t want to read too much into their words, but we can use their comments as a primer; to an extent.

In general, John Schneider was tight lipped talking about draftees and criteria for evaluating and creating the Seahawks’ board. Both Carroll and Schneider continually used the word competitive to describe their approach to the draft, Schneider often sighting the potential loss of competitive edge by divulging information about prospects to the media; "We will take the best player available...that we need," Carroll's response to a reporter asking about draft strategy.

1.Carroll called it a special off-season, a chance to “dig in and re-evaluate” with the coaches due to the extra time. The coaches helped complement the draft evaluation process, as opposed to creating off season workouts and team activities.

I think the more frequent and developed communication between coaches and scouts could lead to some against-the-grain-with-the-media picks.

Some wrinkles could be installed in 2011 because of the combination of extra time to scheme and scout. The Seahawks are focused on building through the draft, complementing the roster that is coming back into 2011, not replacing it.

2. This quarterback class is extremely varied in terms of quarterback types; a wait and see approach towards what will happen on draft day. Schneider eluded to there being "chunks" of depth at each position, but declined the opportunity to talk about which positions, and where.

3. Carroll is confident his communication and approach with Tom Cable, Darrell Bevell and Carl Smith has the offense headed in the right direction

When asked about the offensive changes, Carroll continued to stress the excitement of working with guys with the same philosophies, enhancing their ideas as a whole. Carroll seems focused on getting the running game going in 2011, having more control and variety along the line of scrimmage.

On defense, he called the secondary play “shabby” at times in 2010, and expects that to be better in 2011. He stressed finding more balance on defense, opposed to being reliant on a few key positions or players; such as Red Bryant.

4. Carroll again praised the “competitive depth” on the interior offensive line that was developed within the program, but didn’t show on the field in 2010. He made a similar statement at the combine.

5. Carroll on him and Schneider’s working relationship, especially when discussing “tough” decisions; “were trying to bring out the best in our combined thoughts...we have a relationship where we can keep pounding away until we find something we agree upon...We’re both trying to figure it out…sometimes you have to dig and claw and compete to find the answers…We use everyone in the organization’s opinion (within that persons role) and take in all the info we can to work until a conclusion is made.”

Schneider, “Pete’s not the type of coach that’s going to hit the table and say this is how it is, and that’s one of the most intriguing things about the job.”

There is a culture within the organization that allows for maximum input, designed for maximum output. Staff and coaches are fully a part of the evaluation and draft board creation process. Carroll and Schneider want to make sure all information is put out on the table, not held back due to hierarchy. It’s an open-minded organization, to say the least.

6. On the preferred way of handling a drafted quarterback “We’d both prefer, if given the chance, to groom someone and let them mature at their pace. You’d rather bring him along to slow things down, get him in command, let him think clearly. But, we’ll do what we can with our choices and opportunities.”

7. Carroll on the evaluation process, “How many different ways can you look at the information to get to the essences of what you’re trying to find?” The organization believes in trying to use as many perspectives as possible to get to that “ah, ha” moment. They both mentioned how the extra time has allowed for more of those moments to occur, both good and bad, evaluating 2011 draftees.

8. Golden Tate goes into 2011 with big expectations; Carroll believes he was underused last year and really needs to be “elevated.”

9. Character is a big issue; they want guys to fit together and draw on each other. Schneider did mention how Carroll believes there are certain prospects with character issues that can fit, but in those cases Schneider gave the inclination Carroll was confident in his abilities as a mentor to take on those challenges.

The mood seemed on par, an attitude of unorthodox diligence with enthusiasm and humor, headed into Thursday.

All 101 prospects are players I think can fit into the current Seahawks roster--they are not the only 101 prospects--. The list is in order of their fit for Seattle, not necessarily generally perceived value.

Those generally regarded as top 20 picks are not included in the list, unless I think a player is a very good fit for Seattle and could possibly drop to pick No. 25—look at it as a way of considering a best case scenario.