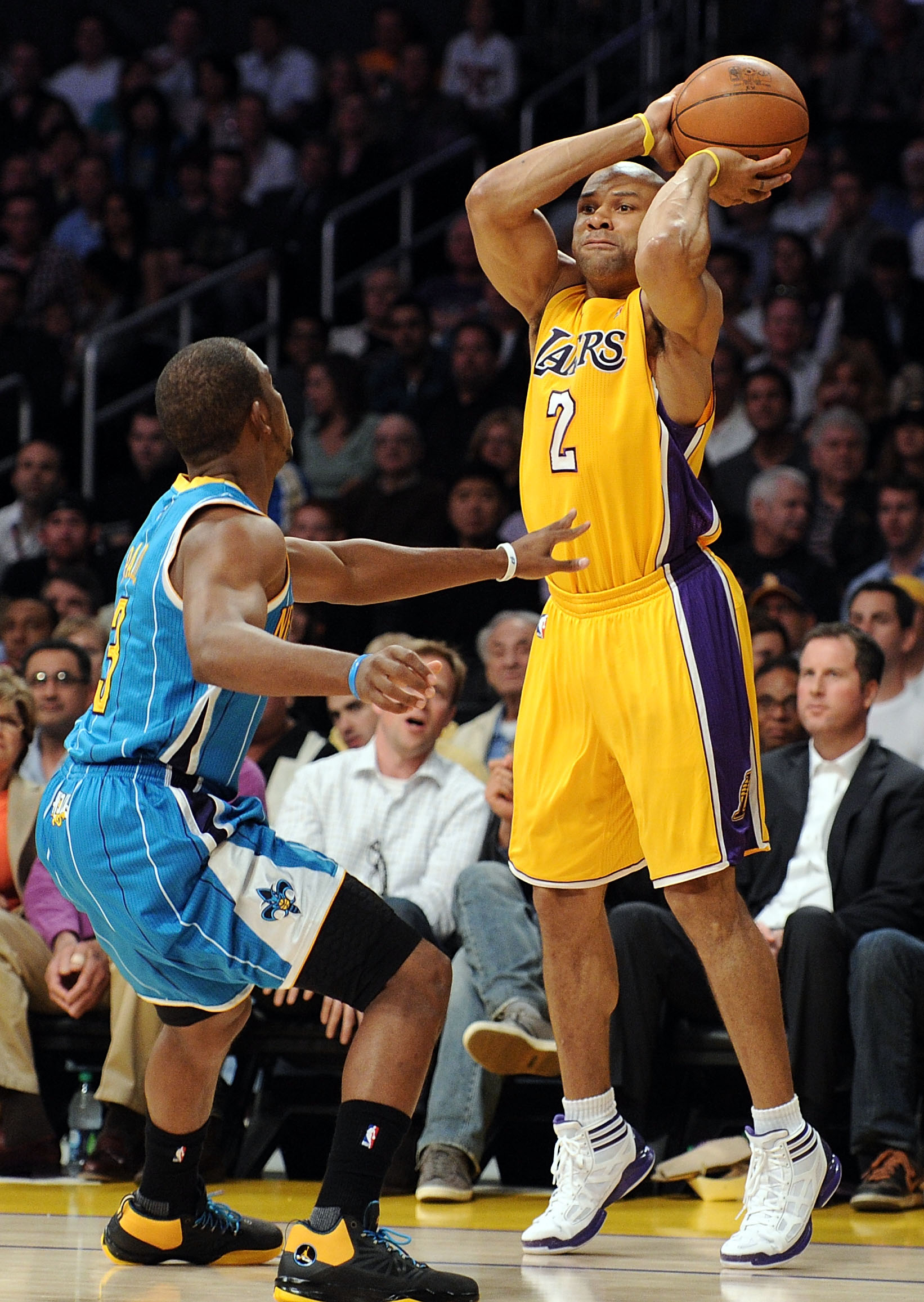 Since arriving to the Lakers in 1996, the same year as Kobe Bryant, Derek Fisher has proven his value to the team in more ways than many fans expected out of the Arkansas-Little Rock product.

Despite never being the fastest point guard or a defensive stalwart, he's found ways time and time again to produce in the clutch, the ultimate hallmark of a Lakers legend.

Game 5 against the Hornets was no different as Fisher chipped in 13 points to help the Lakers retake the edge in their first-round series.

It's moments like that which Fisher has become known for in the spring, and it's defined his legacy as one of the most underrated clutch performers of his era.

Here's a list of D-Fish's greatest postseason moments, ranked in order of significance. Consider this a tribute to one of the most beloved Los Angeles sports figures of the last 20 years, who has been playoff money. 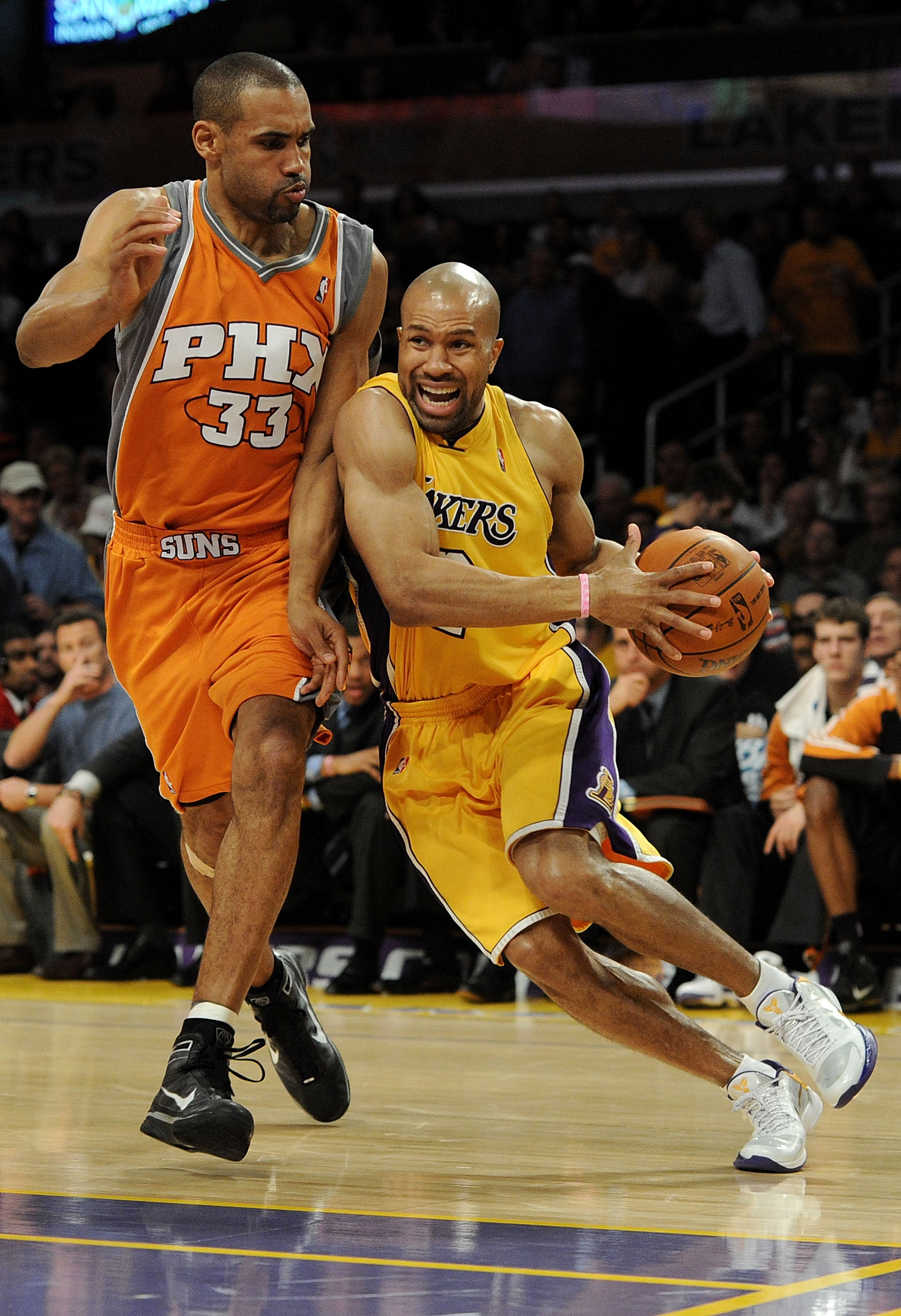 Most Lakers fans will remember this game for Ron Artest’s buzzer-beating putback. What most forget is that Fisher chipped in 22 points to help the Lakers avoid a 3-2 deficit.

It was the most points he scored in the 2010 playoffs and it came when his team needed it the most.

Call this the honorable mention slot. Also going here would be his cheap-shot elbow to Luis Scola in Game 2 of the 2009 Western Conference Finals that got D-Fish suspended for a game, but it showed that the Lakers wouldn't back down to a more physical Houston team.

Despite his hot shooting in the Western Conference Finals, Derek Fisher was outscored by Allen Iverson 48-0 in Game 1 of the NBA Finals as the Sixers shocked the Lakers on the road.

Fisher came back to normal in Game 2, only being outscored 23-14 by Iverson in the Lakers’ victory. But it was his second-half dunk over the league’s MVP that made a bigger statement that Fisher wasn’t going to back down after being embarrassed.

It’s still noteworthy because: 1) Fisher isn’t known for his dunking and 2) Iverson rarely ended up on the opposite side of a poster, as he routinely embarrassed opponents with his dunks or slick handles. Call this one a MVPosterization. 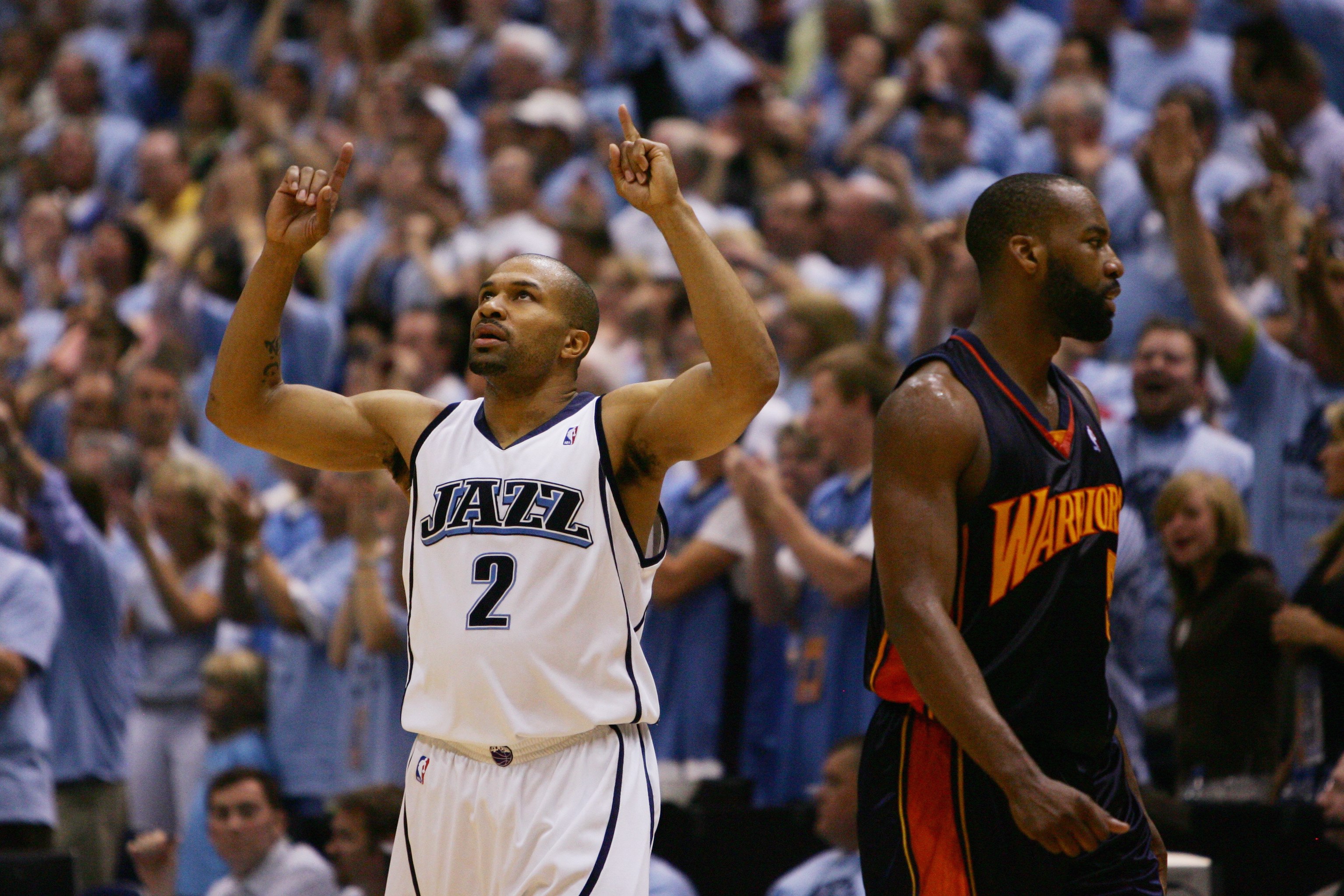 One of the best stories of the 2007 postseason and proof that Fisher’s magic isn’t restricted to purple and gold. What made this so great wasn’t just the game, but what happened before it.

Fisher had to leave the Utah Jazz prior to the semifinals for a family emergency that he wouldn’t specify.

When he landed in Salt Lake City for Game 2, the game was in progress and Fish had to enter right away. What happened at game’s end was nothing short of impressive.

First, Fisher made a key defensive stop on Baron Davis to force overtime. Then in the extra period, Fisher hit a late three-pointer to seal the game and give the Jazz a 2-0 lead.

Finally, he tearfully revealed the reason for his absence, an emergency surgery for his 11-month-old daughter, who was diagnosed with a rare form of eye cancer.

Not only did Fish show his clutch gene wasn't restricted to the purple and gold, he showed NBA fans why he’s one of the league’s best gentlemen and that family comes first. 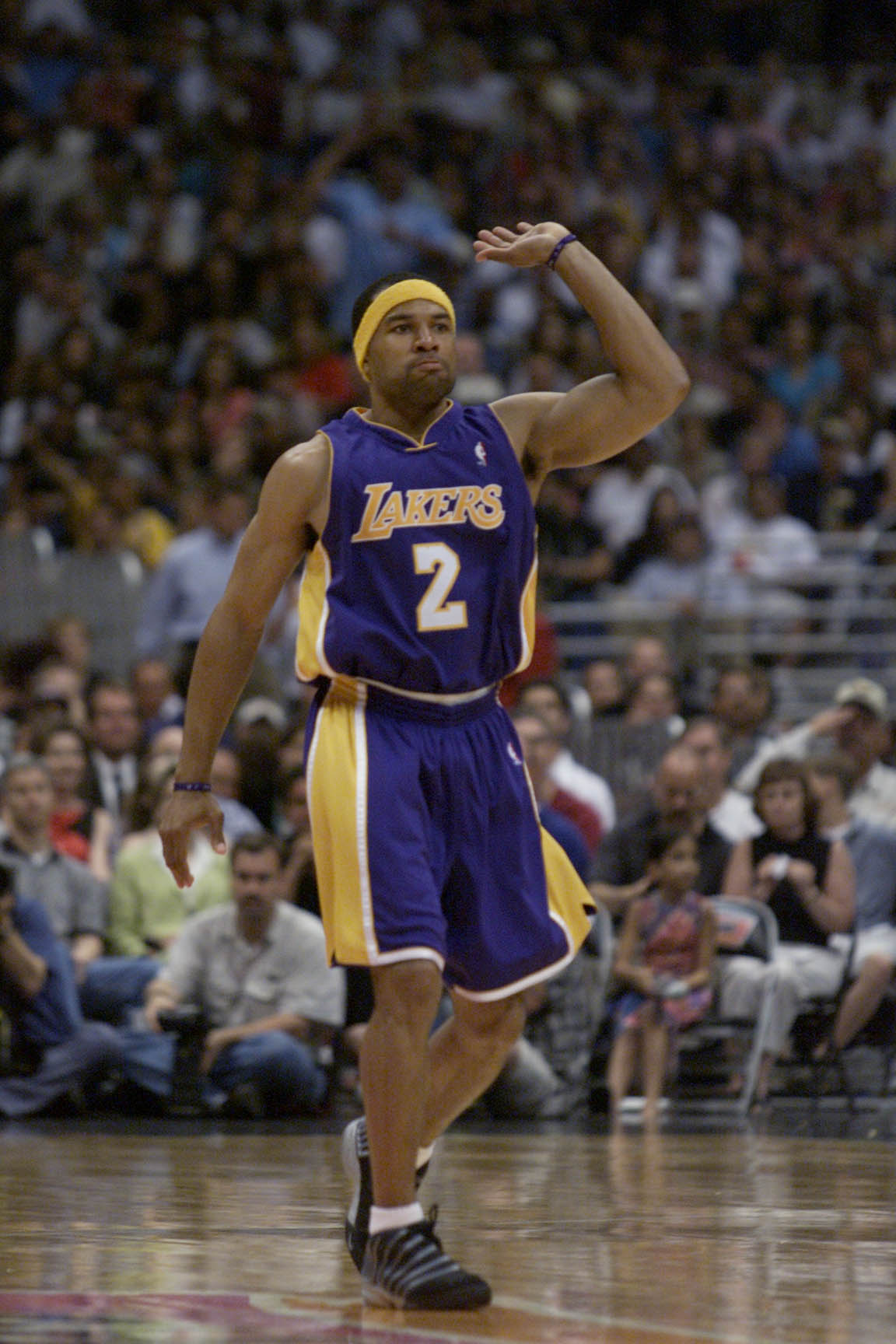 The defending NBA champions entered this series as a slight underdog to the No. 1-seed San Antonio Spurs, which had the NBA’s best record.  Somebody forgot to tell the Lakers that, as they mowed past the Spurs for their third consecutive playoff sweep.

Despite missing 62 games with a stress fracture in his right foot, Fisher picked the right time to catch fire like nobody else in NBA history. He set an NBA postseason record for most three-pointers made in a four-game series with 15 and shot an unbelievable 75 percent from beyond the arc (15-for-20).

He saved his best for last as he closed out the series in Game 4 with a playoff career-high 28 points, going 6-of-7 from three-point land.  It was the first, but not the last, time his shooting would save the Lakers.

The most famous play in Fisher’s career came in one of the best finishes in NBA History. Game 5 saw Kobe Bryant hit a shot with 11 seconds left followed by Tim Duncan’s off-balance jumper with 0.4 seconds left.

Fisher sacrificed his starting role that season for Gary Payton’s arrival. He was the last option on the court behind Shaq, Kobe, Malone and Payton on that final play. But when the ball came his way, he knew what to do and the rest is history.

It’s one of the greatest moments in Lakers history and of the last decade, but I rank it lower than most folks because as great it was, it didn’t contribute to a title and it didn’t happen in the NBA Finals.

It says a lot about Fisher’s heroics that this ranks behind the ones ahead.

The last time the Lakers were in Boston for the postseason, they were on the wrong end of a 39-point, series-ending blowout in the 2008 NBA Finals. With the series tied at 1-1 two years later, they needed a spark to prove this time would be different.

Enter Derek Fisher, who scored 11 of his 16 points in the fourth quarter, including a three-point play to seal the win. The play symbolized Fisher’s instinct for rising to the moment while sending a message to Boston.

He grabbed the rebound, dribbled upcourt, saw an open lane and drove on Kevin Garnett, Big Baby Davis and Ray Allen for the layup.

He memorably cried during a postgame interview and Lakers fans everywhere knew that those tears symbolized his loyalty for a franchise that gave him as much as he gave them.

It stands as the latest reminder of his importance in team history.

This is the No. 1 Fisher moment for a few reasons. It directly set up the Lakers’ first title of the post-Shaq era. It also re-established Fisher as one of the most clutch playoff performers of his era five years after the 0.4 shot.

The Lakers led the Finals 2-1 but trailed the Orlando Magic by three late in the fourth quarter in Orlando. Fisher was 0-for-5 on three-pointers, but still had the confidence to put one up with 4.6 seconds left that sent the game into overtime.

He followed that up with a tie-breaking three-pointer with 31.3 seconds left in overtime to put the Lakers up 3-1.

Those two shots changed the course of the series and, at a time when Fisher was called old and unable to guard faster players, it reminded Lakers fans of his true value to the franchise.

One more point on Fisher: The top three moments were all done on the road. It’s one thing to be clutch at home, but it takes something extra to hush up a rowdy crowd.

That’s why D-Fish means more to Lakers fans than what comes up in the stat sheet.