Finally, 10 months after winning Lord Stanley’s Cup, the Chicago Blackhawks once again resembled a championship-caliber team. With their backs against the wall and defensive stalwart Brent Seabrook scratched due to an “upper-body” injury suffered in Game 3, the defending champs rose up and pounded the Canucks. Relentlessly. For 60 minutes.

Dave Bolland’s return from a concussion fueled Chicago’s best showing since that June night in Philadelphia, as the Blackhawks steamrolled the Canucks 7-2. Bolland tallied four points and spearheaded a line along with Bryan Bickell and Michael Frolik that made the Sedin twins entirely irrelevant.

This is what the NHL had grown accustomed to seeing from Chicago-Vancouver games: Chicago in control, Roberto Luongo imploding and the Canucks accruing penalties left and right, while having the all-too-familiar sounds of “Chelsea Dagger” ingrained in their eardrums.

Marian Hossa found his way onto the score sheet, Patrick Kane looked more like the crafty youngster Chicagoans have come to love, the hitting was kicked up about 500 notches, at times on offense they appeared to have the puck on a string and the forecheck was tenacious. All four lines were clicking and Corey Crawford made a handful of highlight reel-caliber stops.

This team had way too much pride to be dismissed in four straight by the hated Canucks. Captain Jonathan Toews was not letting that happen.

"You're not going to lay down and let that team take four games in a row from you, especially when they pull stunts like that," Toews told Dan Rosen of NHL.com after the game.

“Stunts like that” is a reference to the blow to the head Vancouver’s Raffi Torres dealt Seabrook in Game 3. Toews said the team used that hit as a motivator, and it quite obviously was just what they needed.

The Hawks suddenly were the team flying all over the ice, creating havoc in the neutral zone and winning the vast majority of loose pucks. It was Chicago that possessed the puck as if it were on a string, Chicago that played with an edge, Chicago that dominated en route to a convincing victory.

Gone were the depth problems and the passiveness. Bolland’s return appeared to be the injection of life the lineup had badly needed. All four lines were scoring threats, and all four lines hit.

While the 7-2 drubbing was impressive and very fun for Chicago fans to watch, the fact of the matter is that this 7-2 victory counts for one win, the same as a one-goal win would have.

Vancouver came out flat. They expected the Blackhawks would roll over and play dead, and that’s something they refused to do yesterday at the United Center.

The Canucks are not going to have that attitude again in this series. They have too much pride and too much riding on this series to fail to show up again.

Yes, Chicago feels good vibes after Game 4, but the fact of the matter is that the Canucks head back to British Columbia having split the two games at the United Center; mission accomplished for them.

Game 5 will be a whole different animal. The Blackhawks return to the extremely hostile Rogers Arena, where they have come away victorious just once in four tries thus far this season. The crowd will be intense, there is absolutely no love lost between these rivals, as evidenced by the 88 PIM wracked up in the third period last night.

For as much as Chicagoans despise the Canucks, those in Vancouver feel an even greater animosity towards the Blackhawks. That disdain will be on full display Thursday night.

The challenge facing these ‘Hawks is immense. They are on the board with the first win, but three remain, and each will be harder to obtain than the one preceding it.

The odds remain stacked against them, and in all likelihood they will not pull off the stunning upset. But, that sliver of opportunity, that faint glimmer of hope, exists.

Just maybe, Tuesday was the night a sleeping giant awoke from an almost 10-month long coma.

Only time will tell.

Listen to your captain: Jonathan Toews reminds everyone to stay home

Listen to your captain: Jonathan Toews reminds everyone to stay home 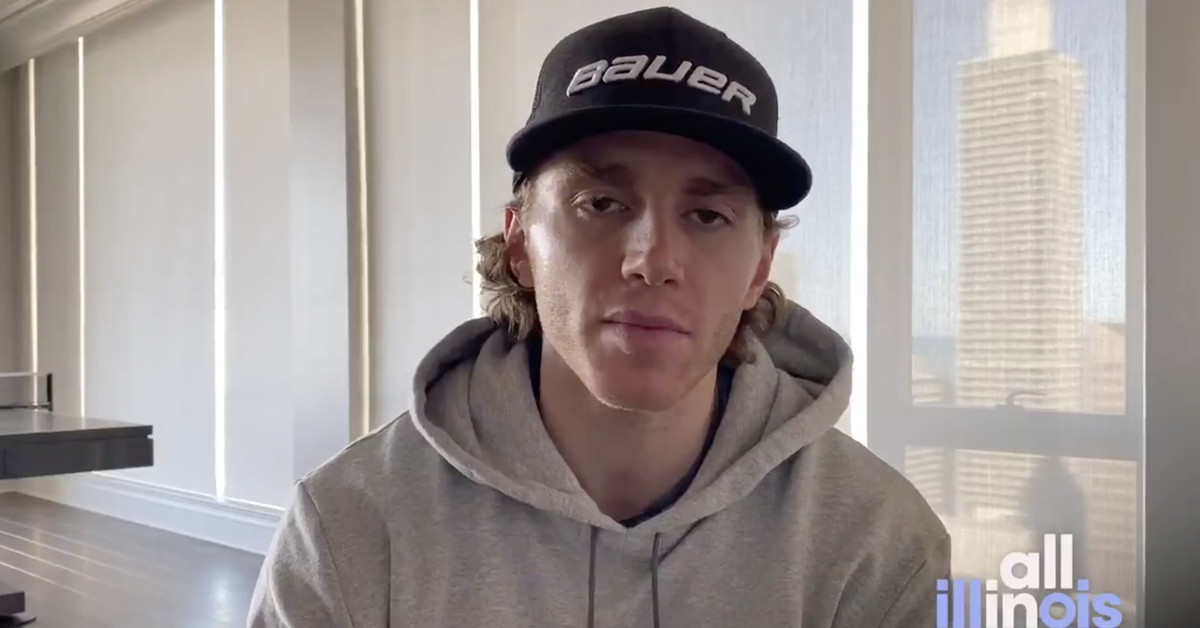 What I miss about covering the Blackhawks

What I miss about covering the Blackhawks

Blackhawks fill out goaltending depth, but what about Corey Crawford?

Blackhawks fill out goaltending depth, but what about Corey Crawford?