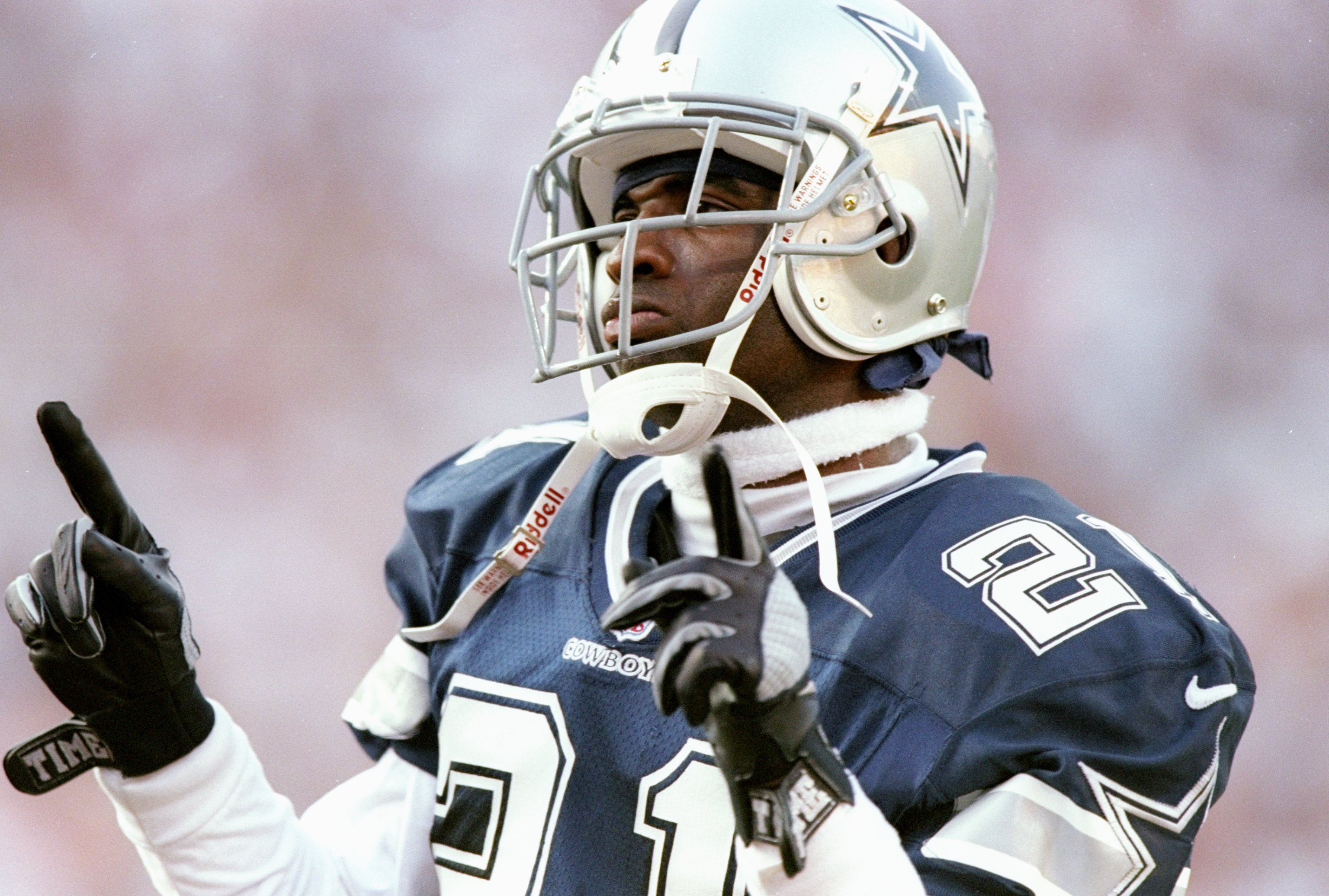 There has always been a "need for speed" in the NFL.

Finding fast players to put on the field is, in some ways, as important as selecting players of size and strength.

This is true particularly at the skill positions. If you don't have guys who have the ability to pull away from defenders, you may have trouble putting points on the board.

The following is a list of the 25 fastest NFL players of all time.

These are individuals who could chase you down or leave you in the dust.

They might not all end up in the Hall of Fame, but they sure are able to fly. 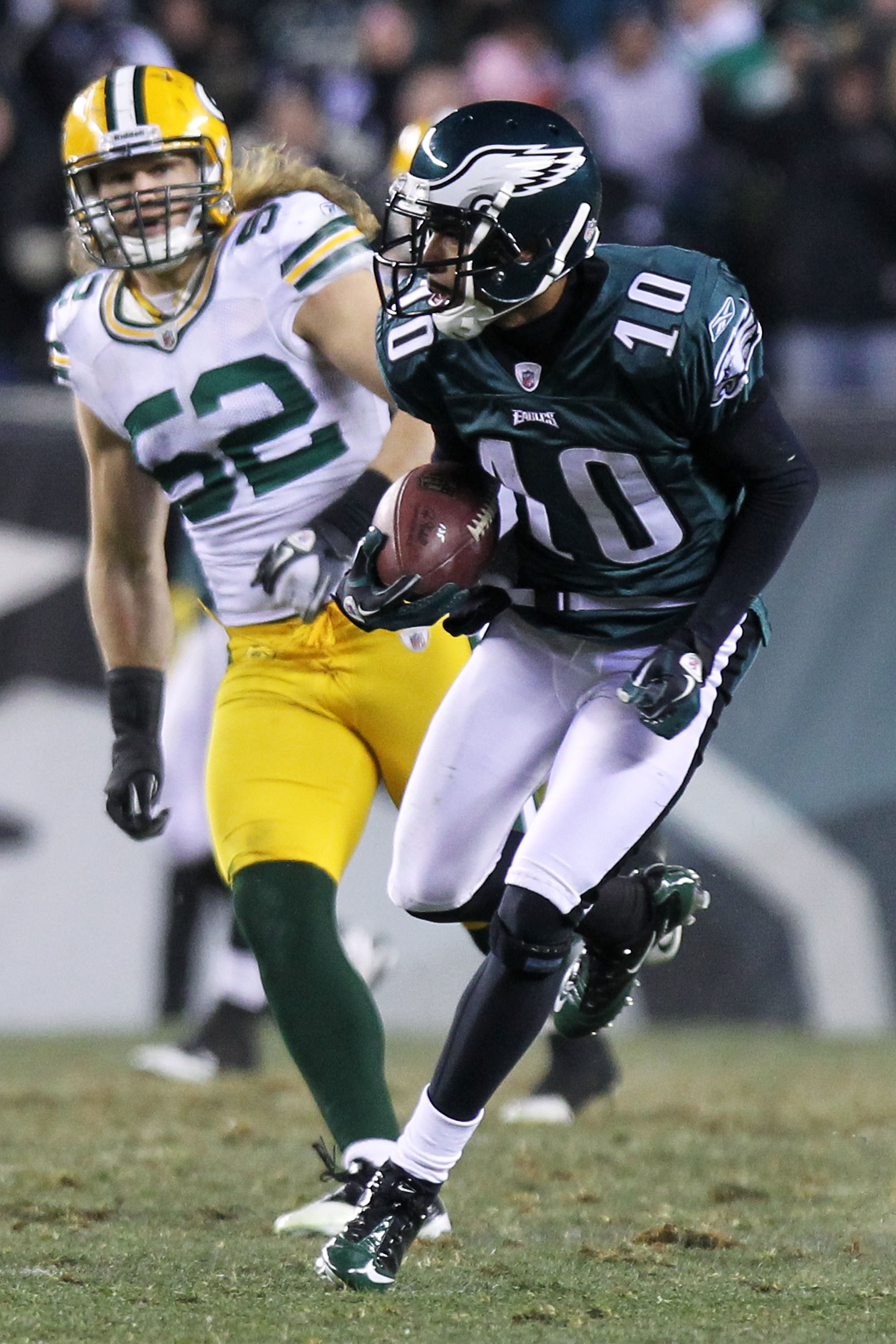 DeSean Jackson has become one of the most dangerous receivers and return specialists in the NFL.

He has been selected twice to the Pro Bowl in his first three years in the league.

He already has over 3,100 receiving yards and has scored 17 TDs. 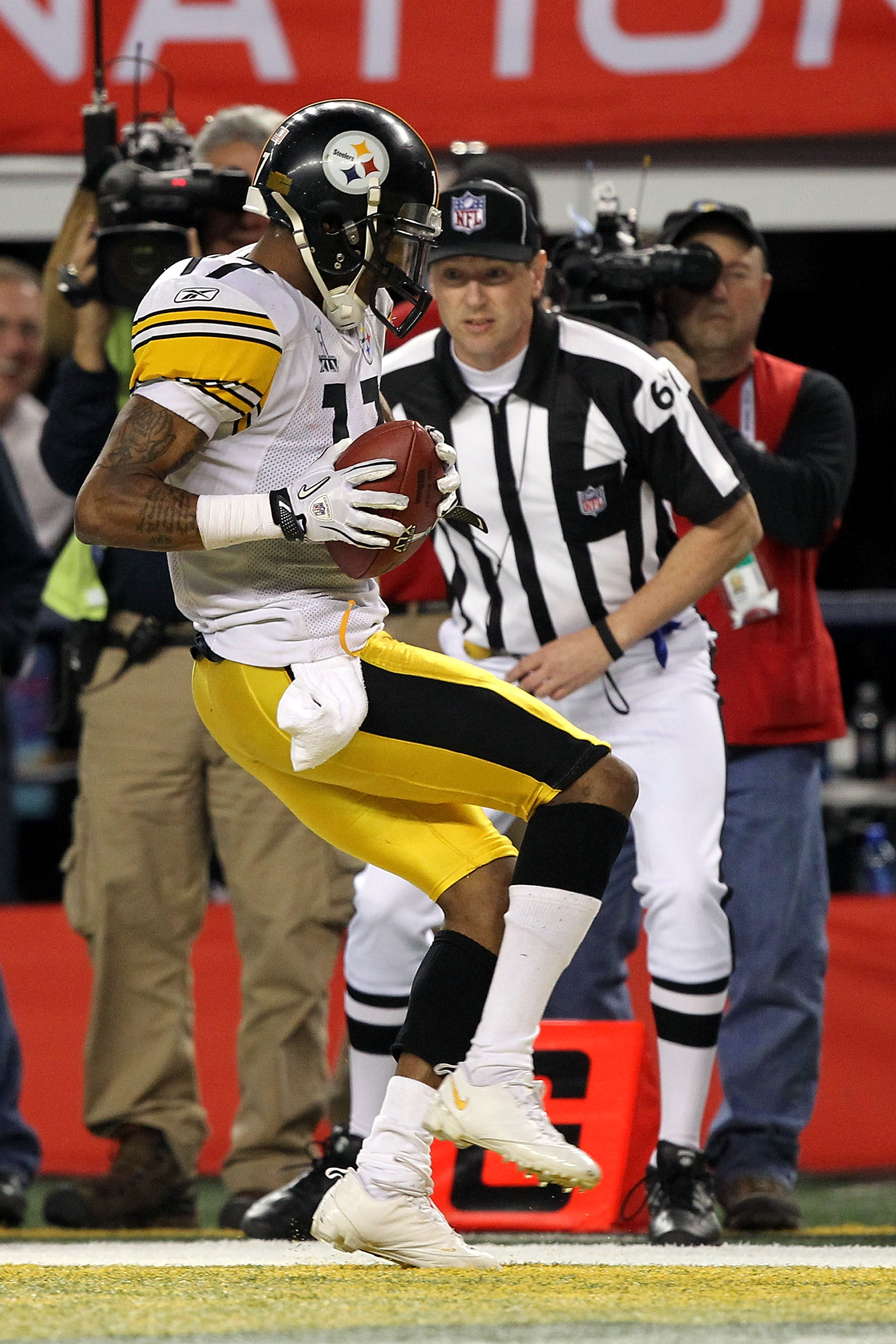 Mike Wallace came into the league ready to produce. He finished his rookie season leading the entire league in average per reception with 19.4 yards.

This past year, he had a standout second season with the Steelers, establishing himself as one of the NFL's elite wideouts with 1,257 yards receiving (third most in the AFC) and 10 touchdowns.

At the 2009 NFL Scouting Combine, Wallace finished second overall in the 40-yard dash with an official 4.33-second time. 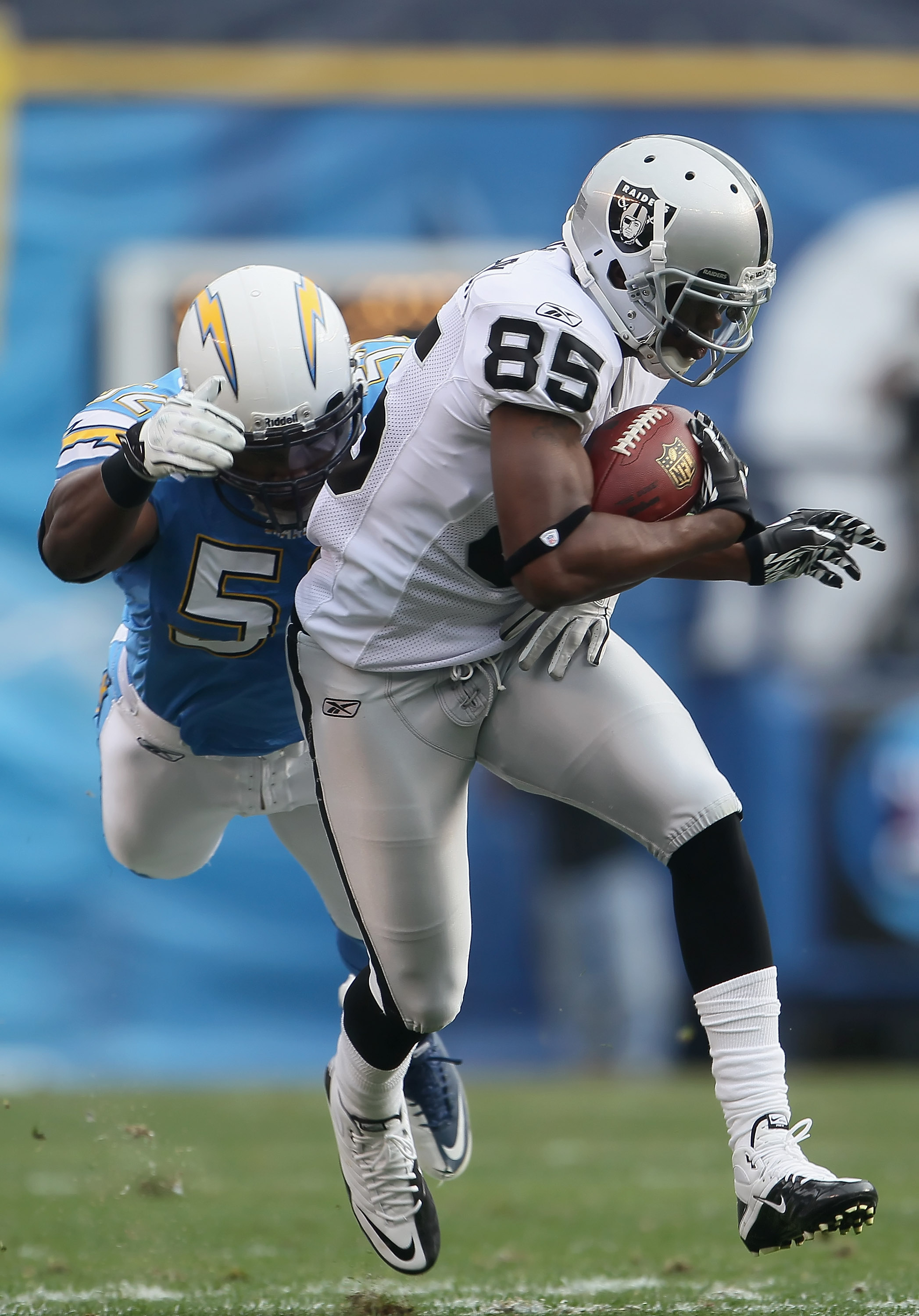 Because of a great combination of size and speed, Heyward-Bey was selected by the Oakland Raiders as the seventh overall pick in the 2009 NFL Draft, ahead of other standout receivers Michael Crabtree and Jeremy Maclin.

Heyward-Bey has a total of 35 career receptions for 490 yards and 3 TDs. 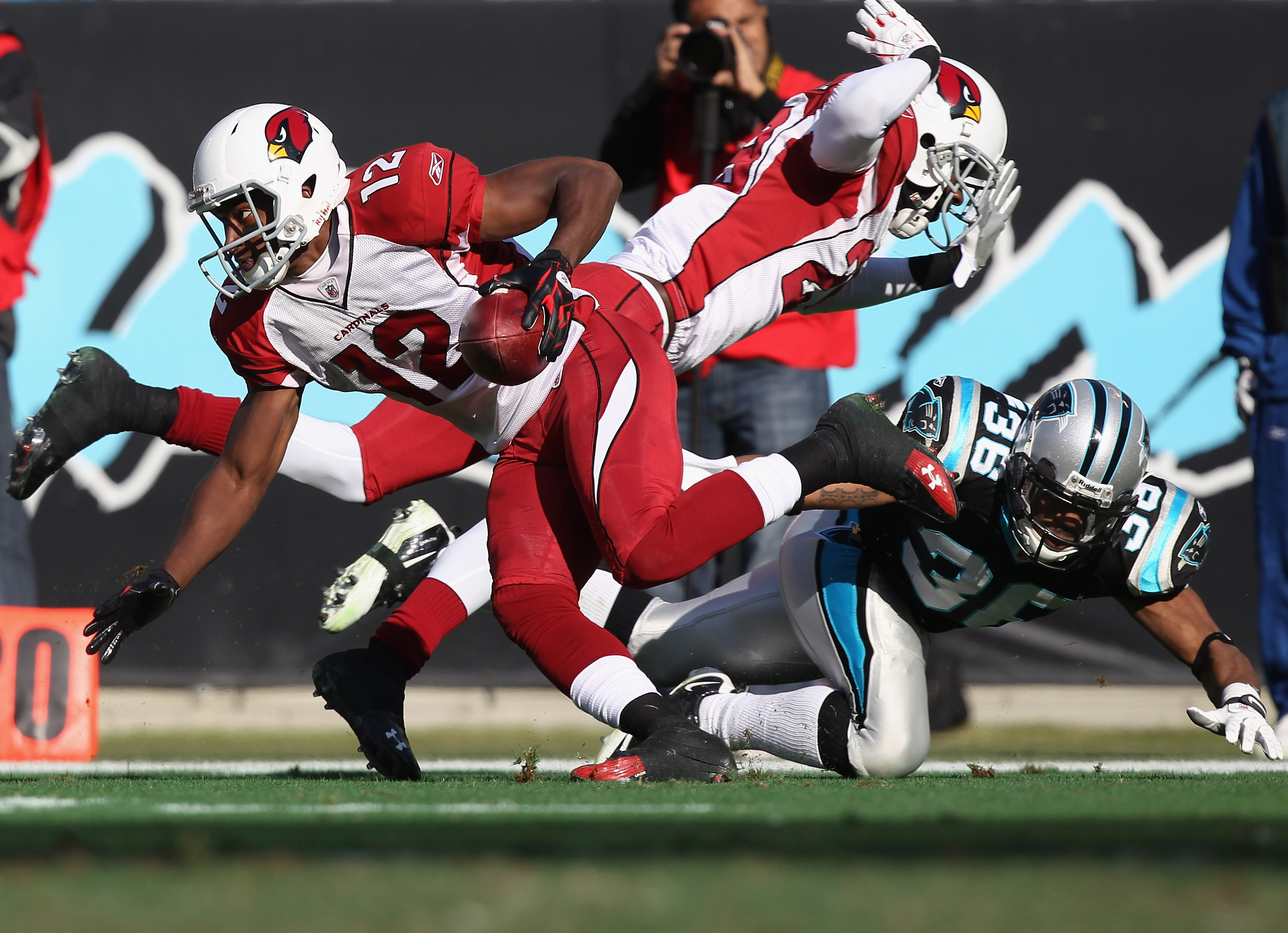 Dominique Rodgers-Cromartie has made an immediate impact in the NFL, already being known as being one of the best shut-down corners.

In his three seasons with the Cardinals, he has recorded 136 tackles and intercepted 13 passes, taking four of those picks back to the house.

At the 2008 NFL Combine, Rodgers-Cromartie ran a 4.29 40-yard dash, helping him become a first round draft pick. 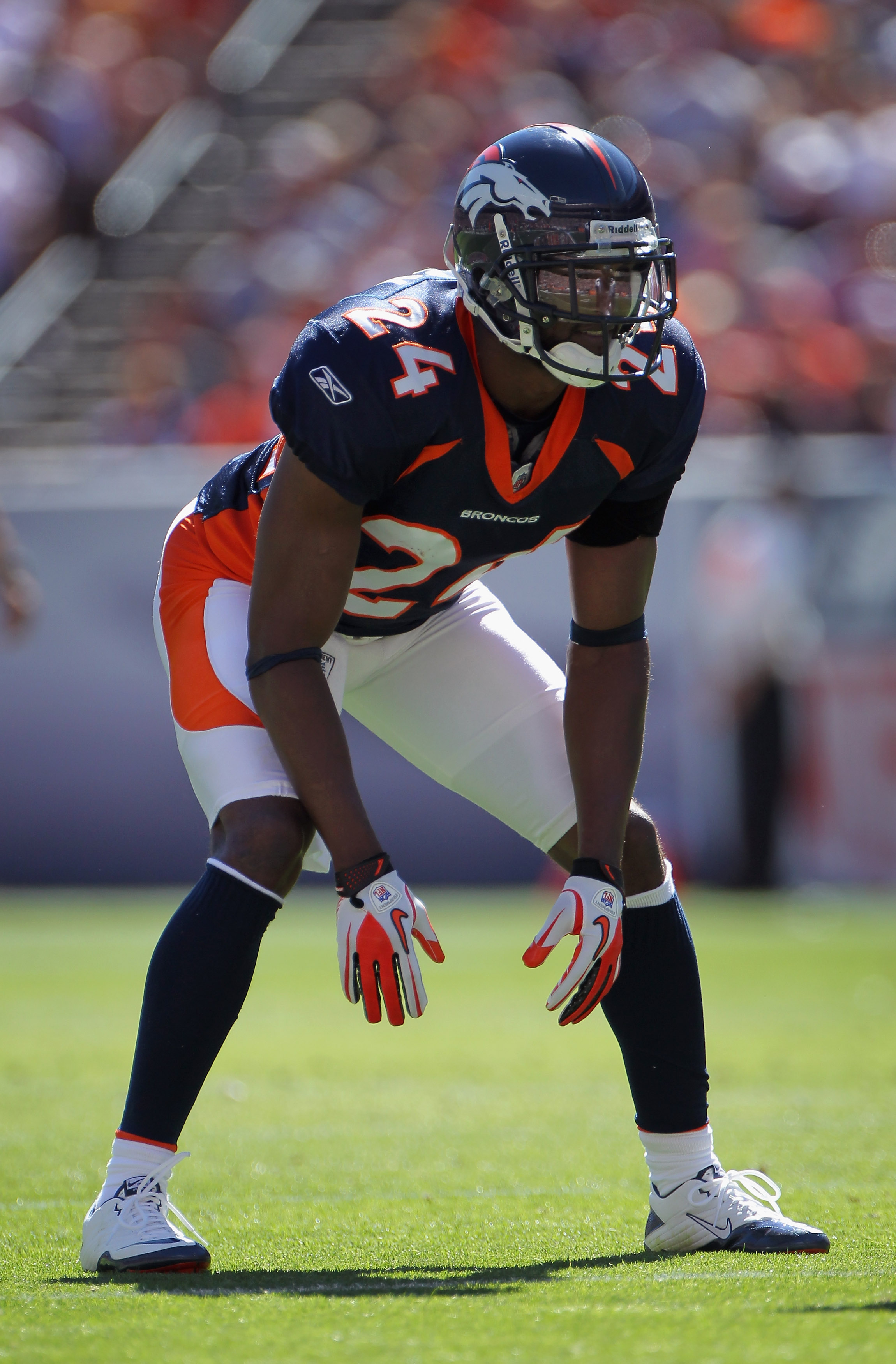 Bailey is considered to be one of the league's best lock-down defenders in the last decade. 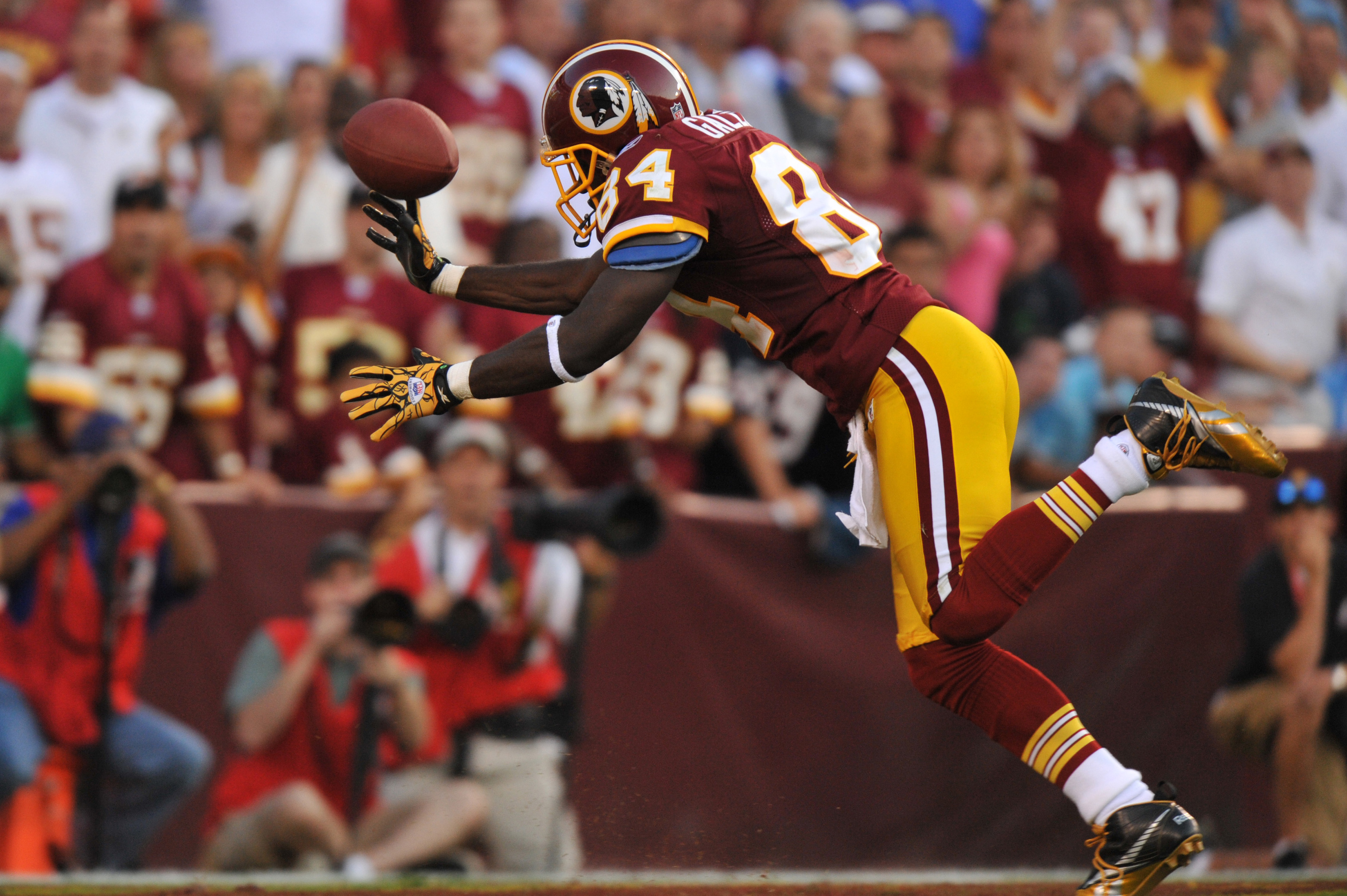 Joey Galloway has had a fantastic NFL career, stacking up nearly 11,000 receiving yards and pulling in 77 receiving TDs.

Galloway always has been able to utilize his exceptional speed and quickness to get open and beat defenders. 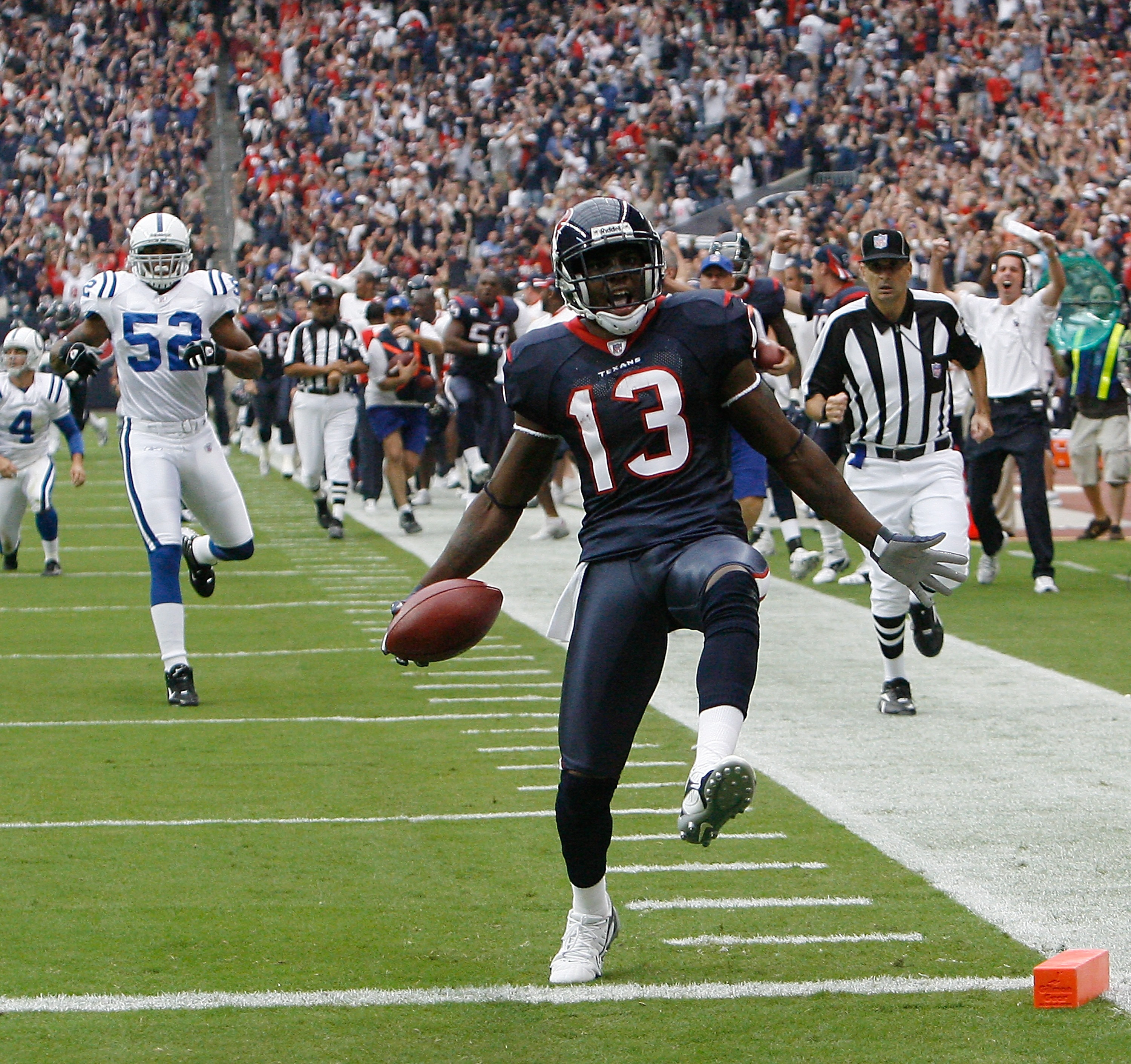 In his short NFL career, Mathis made a name for himself as a dangerous kick returner, averaging 28.5 yards per return and scoring 3 TDs. 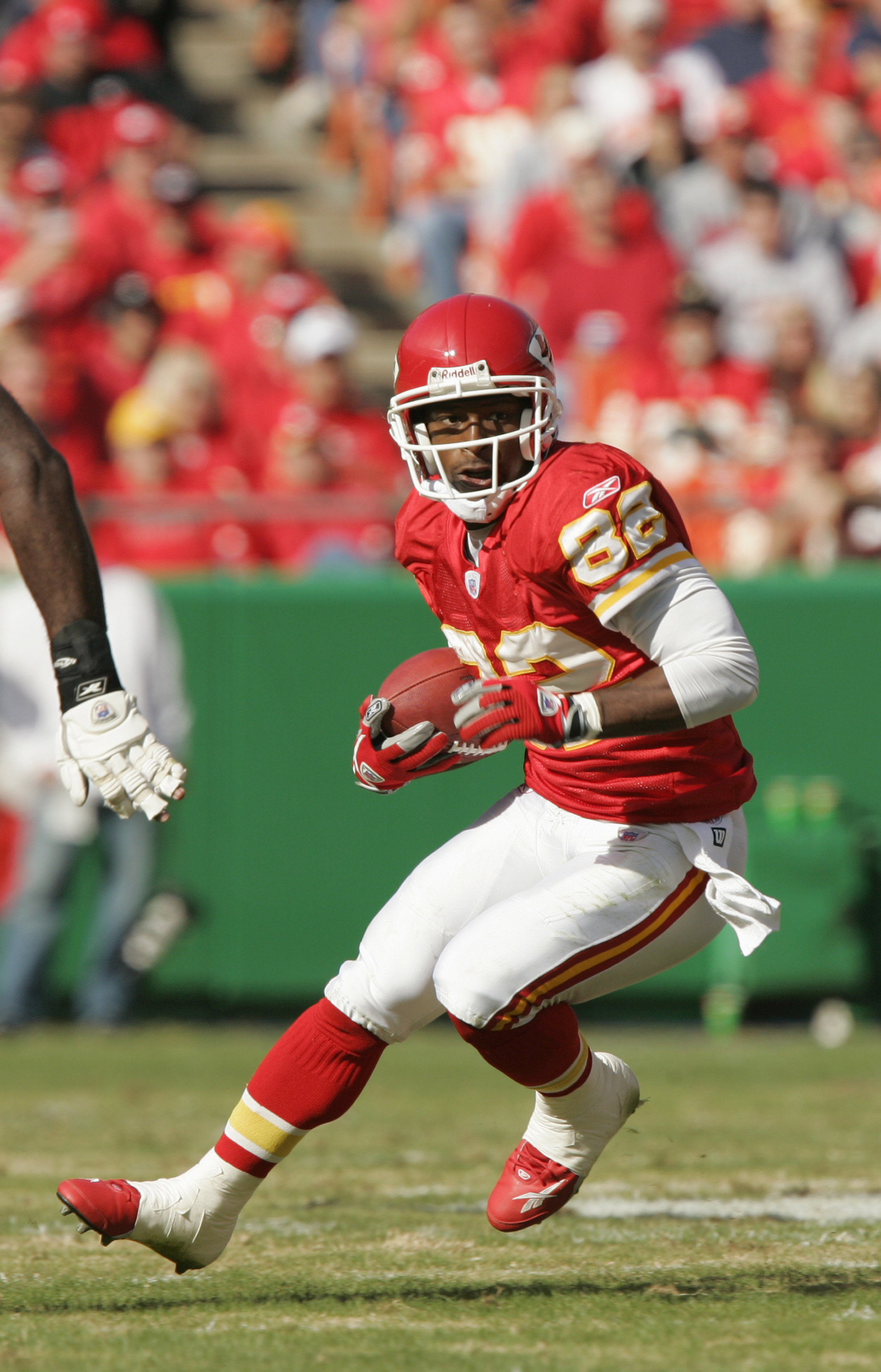 One of Dante Hall's nicknames said it all: The Human Torch...Watch out! He'll burn you! 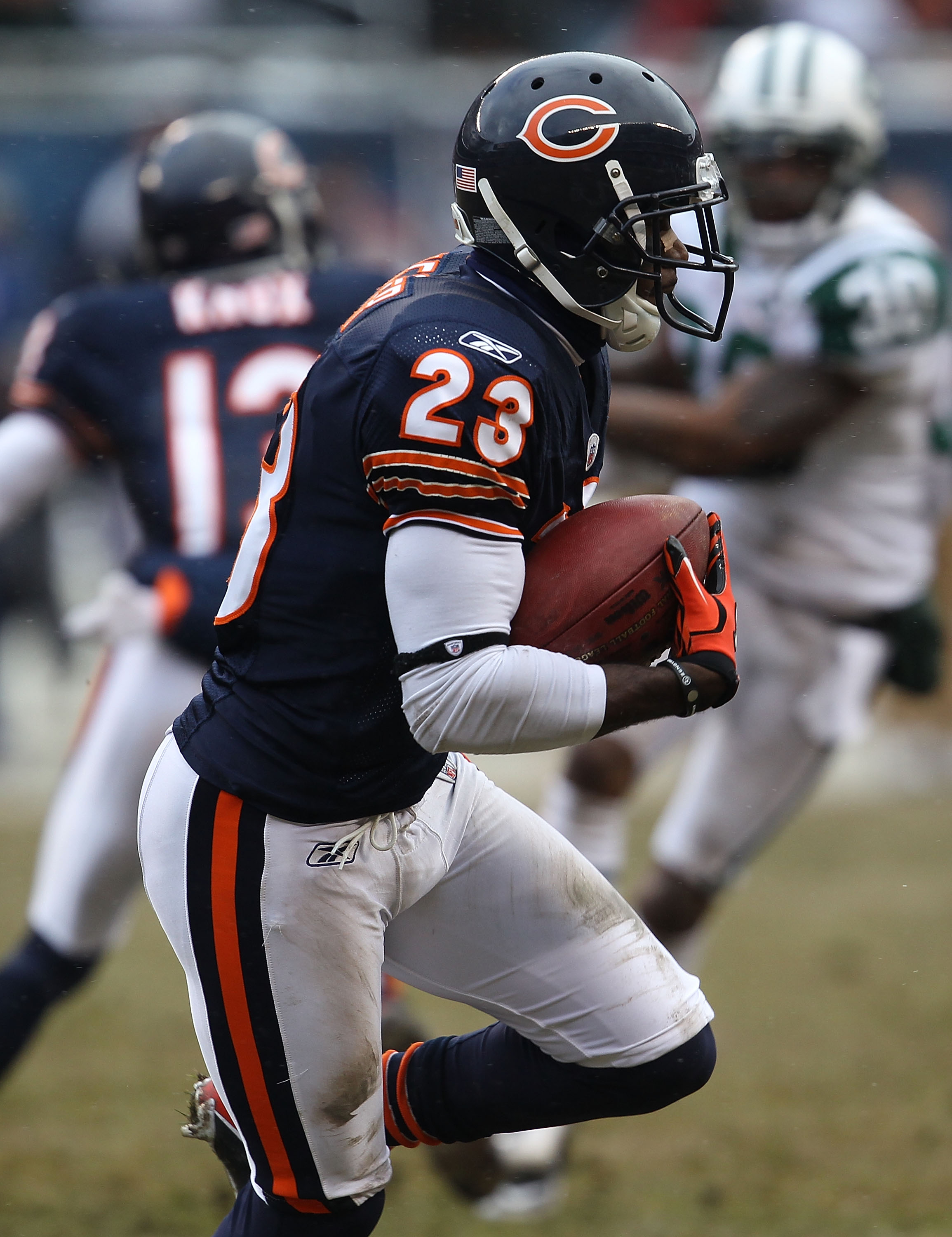 In his first season with da Bears, Hester recorded six return touchdowns, including a punt return in his NFL debut, and a then-record tying 108-yard touchdown from a missed field goal against the New York Giants 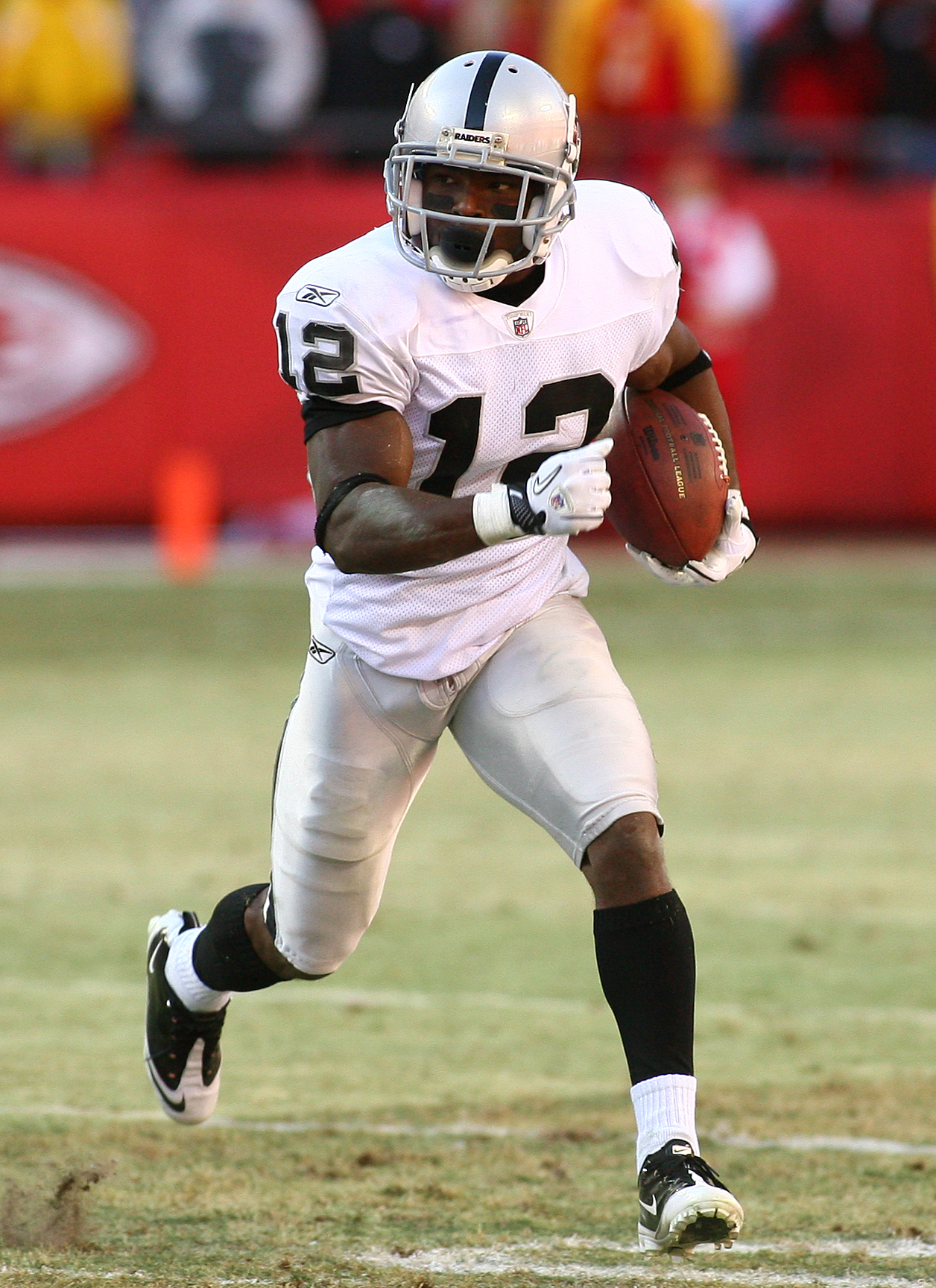 Jacoby Ford is a long and detailed resume as a track athlete. Now, he is starting to build one in pro football.

In his first season in the NFL, Jacoby Ford already holds the Raiders record for the most kickoff returns for a touchdown in a season at 3. 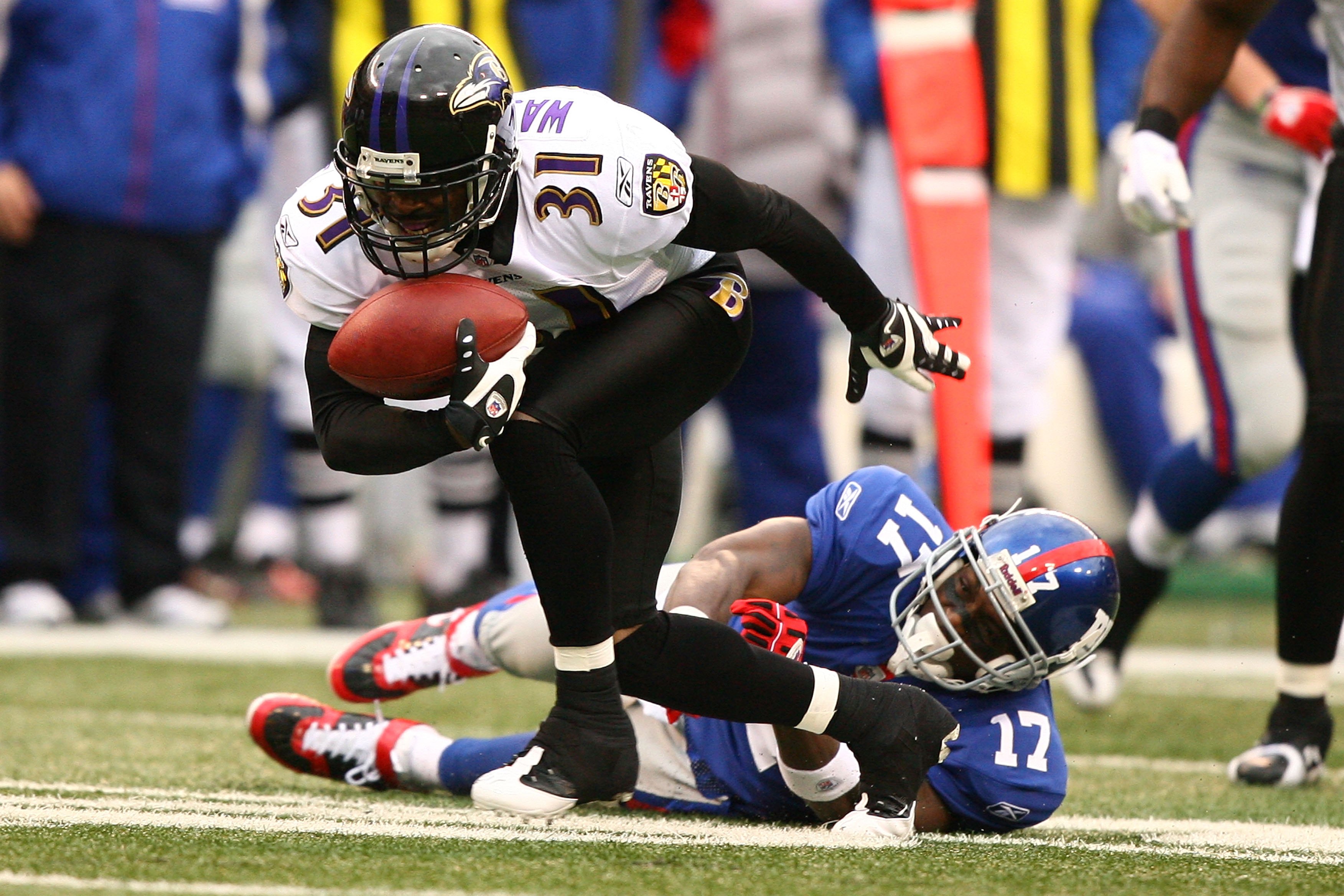 Washington was drafted by the Oakland Raiders with the 23rd overall pick in the 2005 NFL Draft after his draft stock rose after rocketing to the fastest 40-yard dash at the 2005 NFL Combine with a time of 4.25 seconds

In his six years in the league, Washington has recorded 222 tackles and 6 passes. 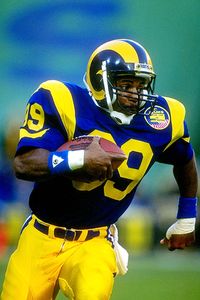 Brown was a gold medal winner, running the second leg on the U.S. world record-breaking 4x100 Relay in the 1984 Summer Olympics in Los Angeles.

He also placed fourth in the 100 Meter Dash at the same Olympics. 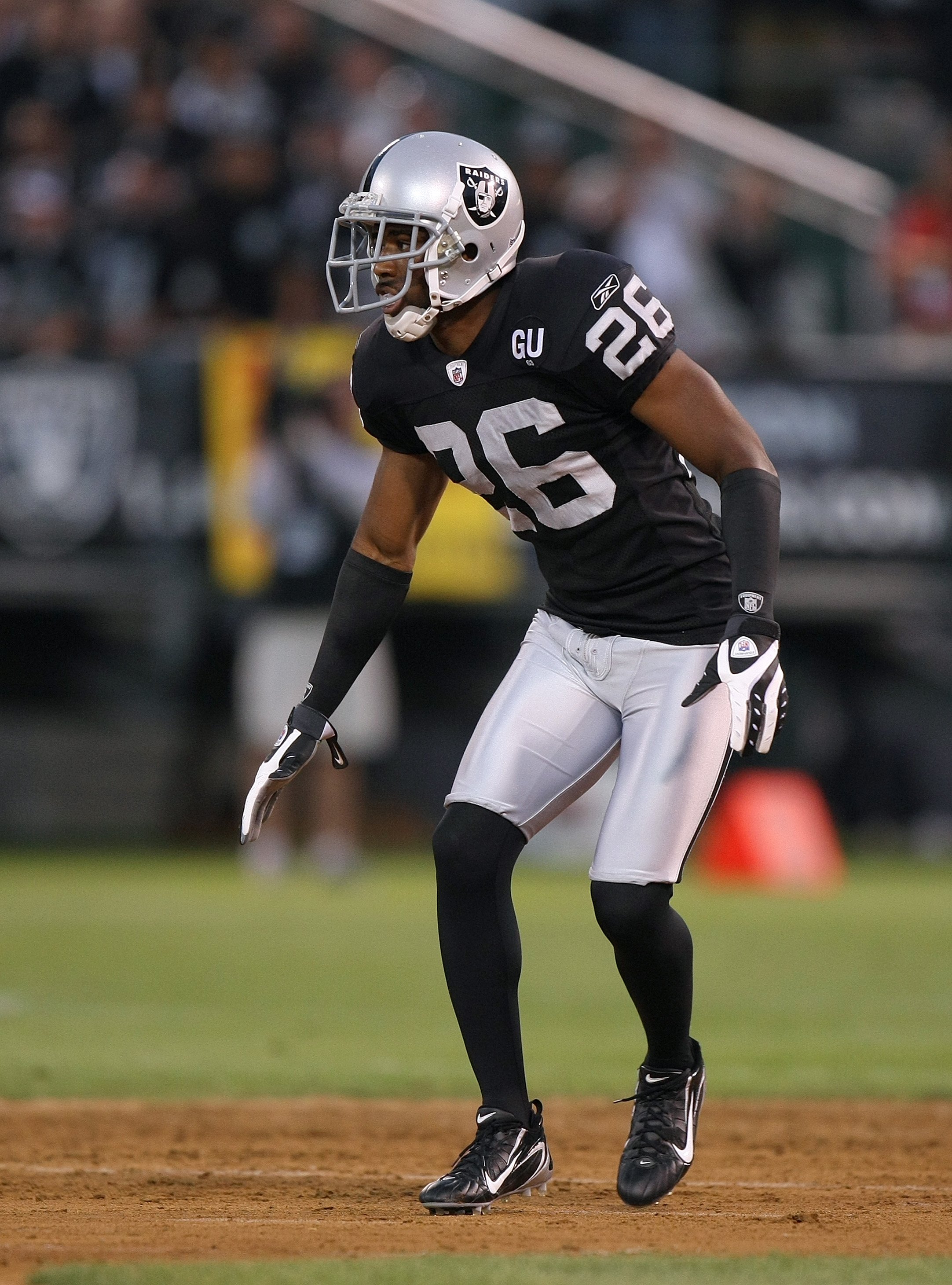 Stanford Routt may not be a household name but he has become one of the top DBs in the NFL.

This past season, Routt had the 2nd lowest completion percentage in the NFL among all corners behind Darrelle Revis.

For his career, Routt has 188 tackles, 35 pass deflections, six interceptions, and 1 interceptions returned for a TD.

At the 2005 NFL Combine, Routt was recorded as having the fastest 40 yard dash with a time of 4.25 seconds. 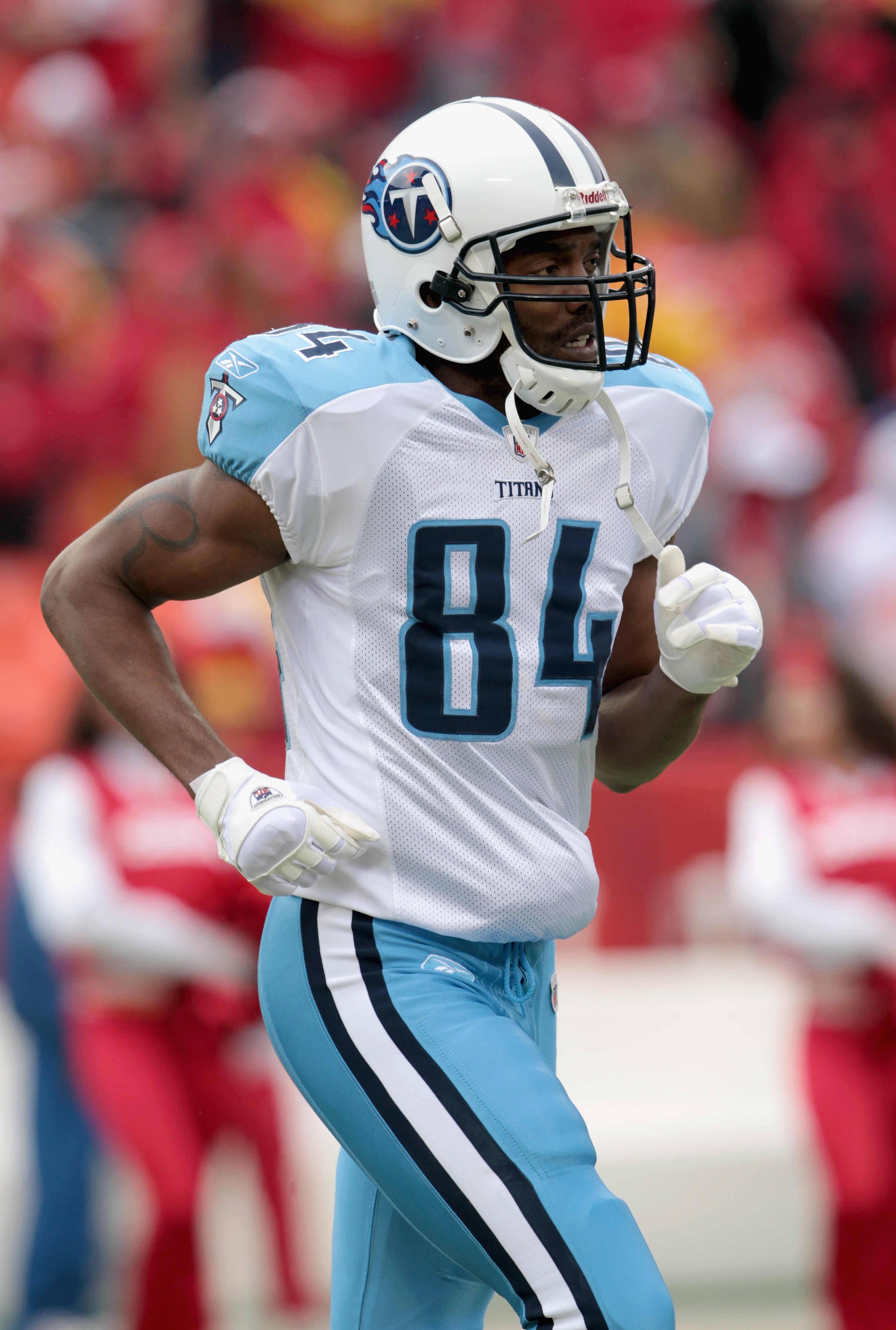 Randy Moss has been one of the most prolific receivers in NFL History.

He is a seven-time Pro Bowl selection and a member of the NFL 2000s All-Decade Team.

At the 1998 NFL Combine, Moss ran a 4.25 40-yard dash. Even many years later, Moss still has extraordinary speed and burst. 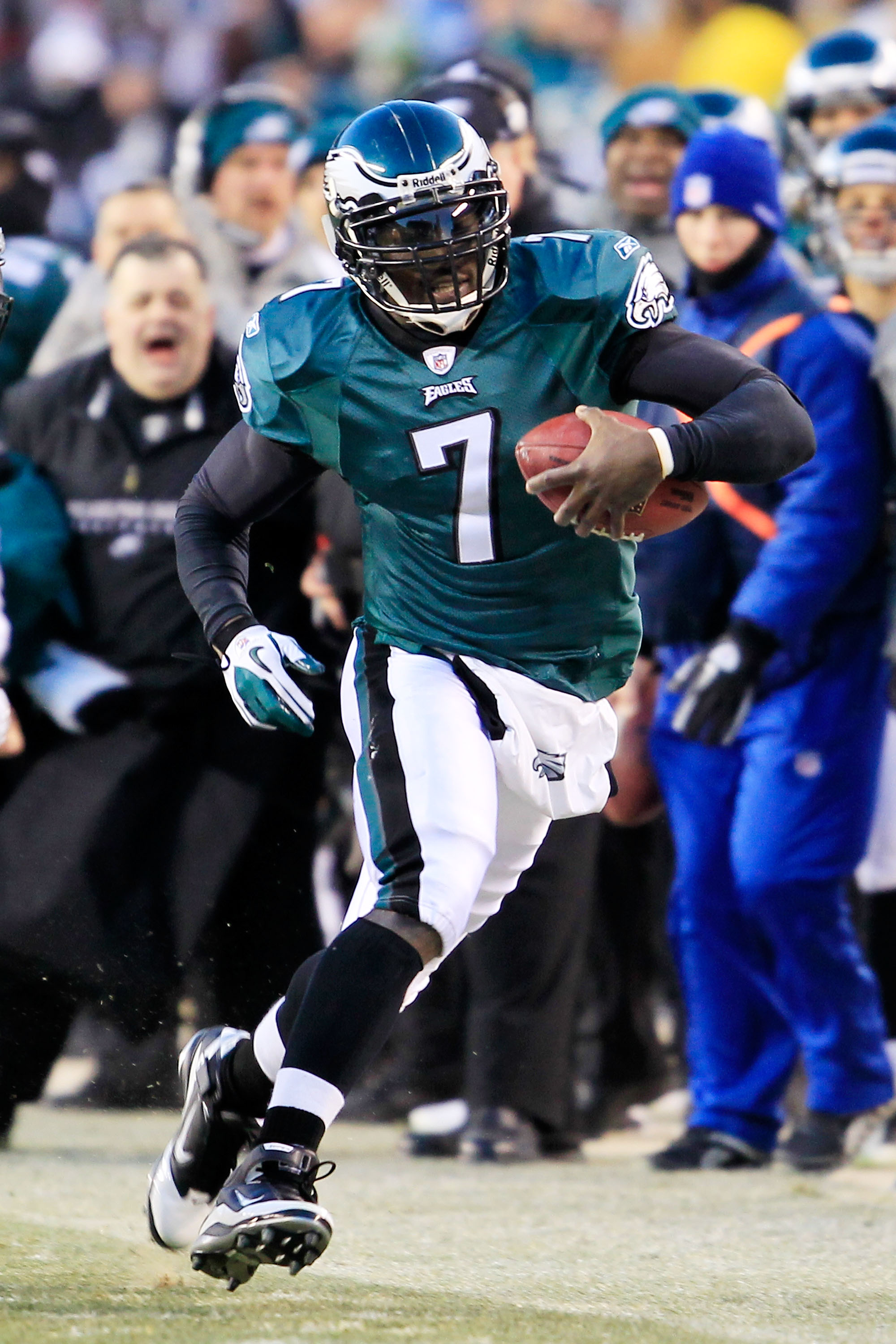 No other NFL Quarterback has ever had the speed of Michael Vick.

Though he has learned the position and become more of a standard QB, Vick still makes a lot of plays with his feet and speed.

Over his career he has rushed for over 4,600 yards and scored 32 rushing TDs. 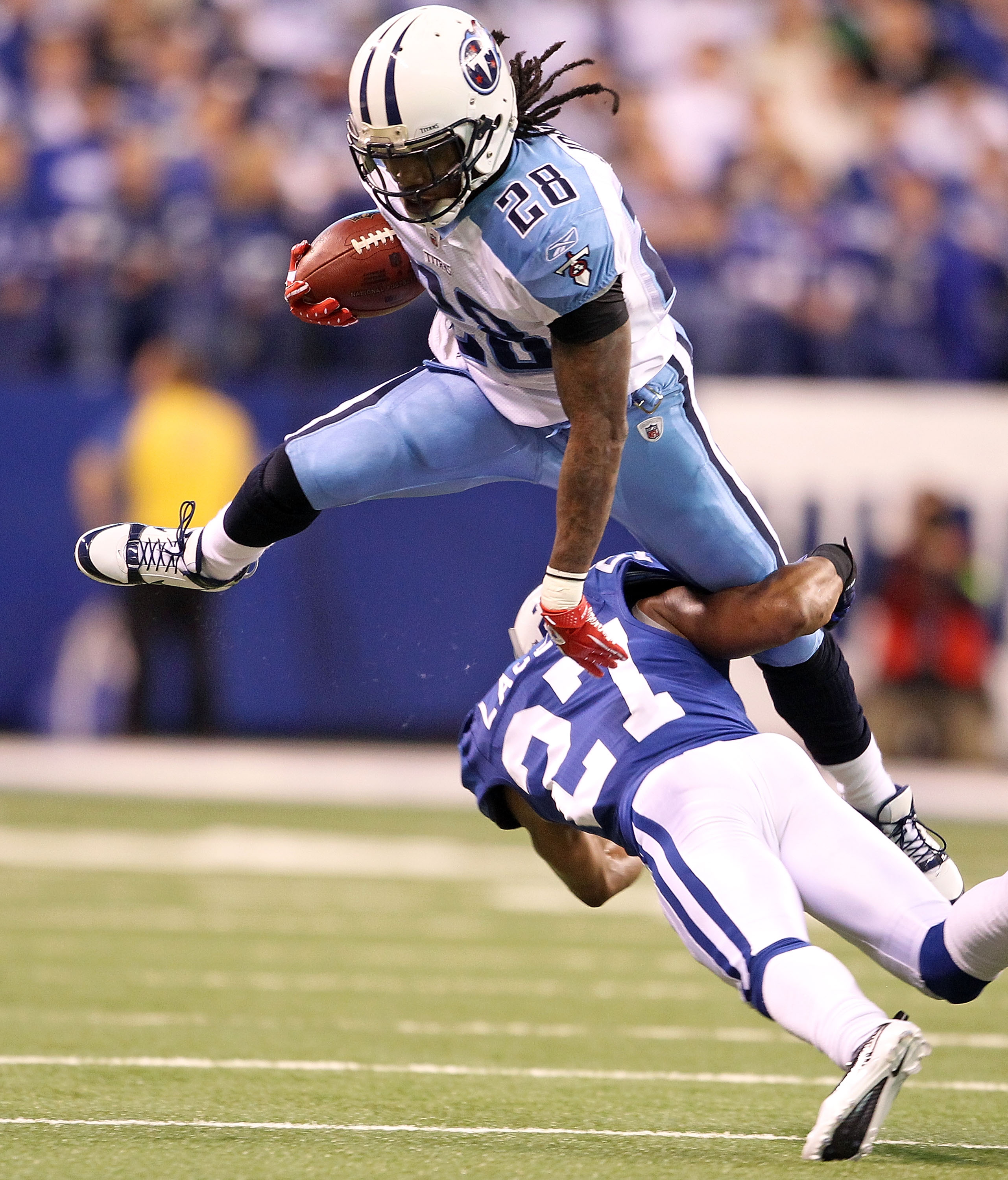 Chris Johnson has become one of the league's premier players, and a Pro Bowl starter in his first three seasons. 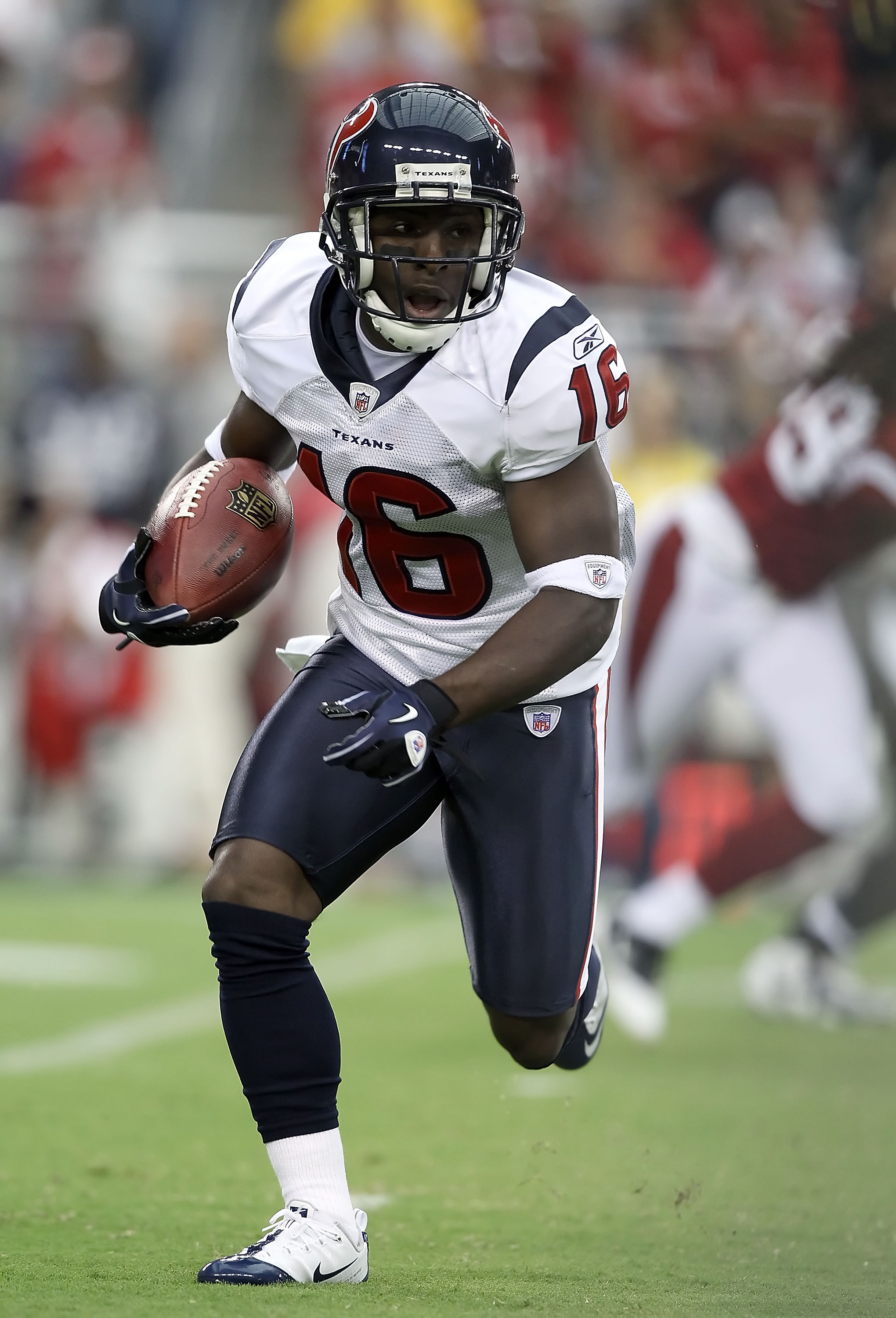 Either way, Holliday is a burner.

While in college at LSU, Holliday ran the 100-meter dash at the 2007 USA Outdoor Track and Field Championships, where he recorded 10.07 seconds in the final – ahead of world-class sprinter Walter Dix and second only to Tyson Gay. 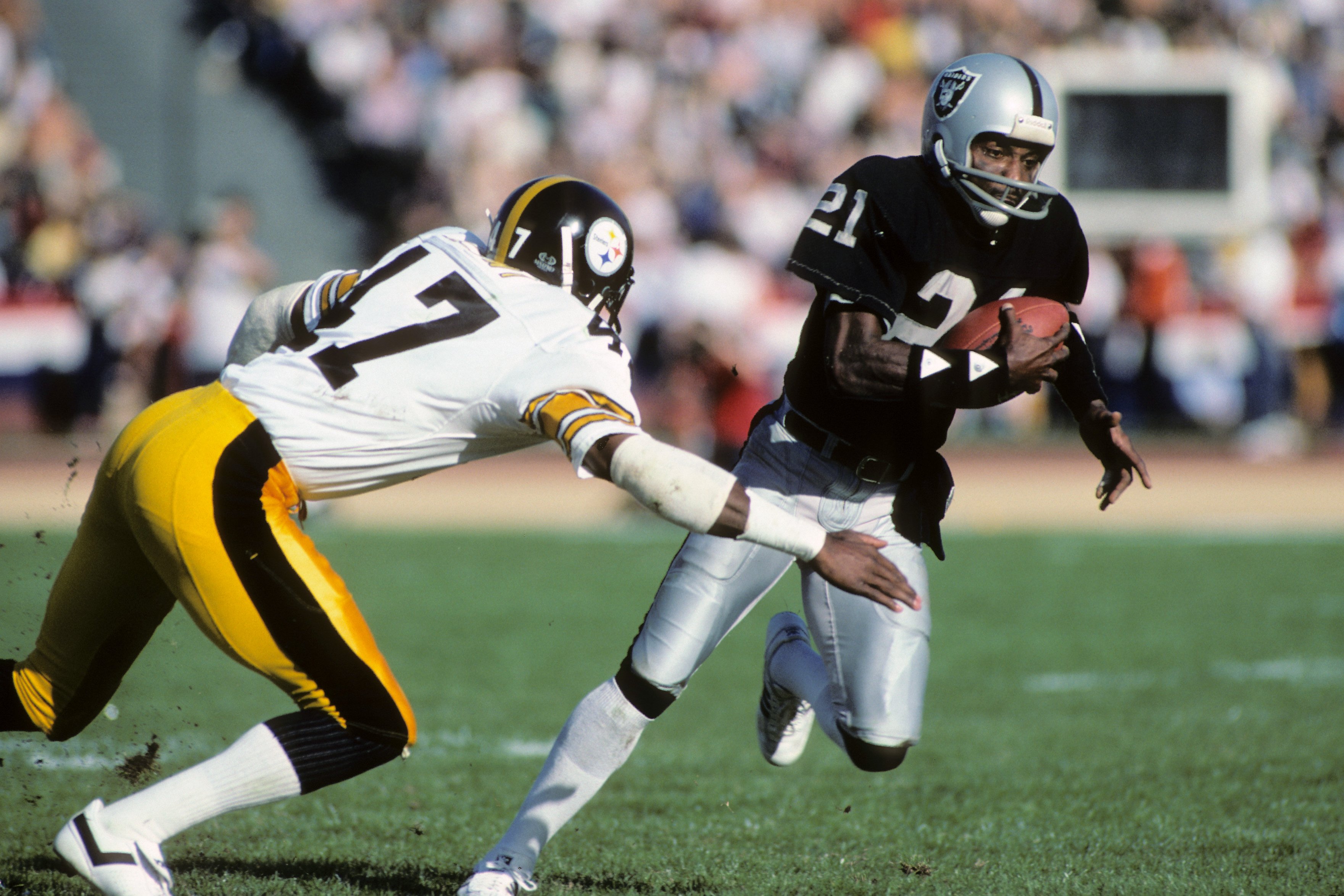 The four-time Pro Bowler used his instant acceleration to run by defenders and would-be tacklers.

For his career, Branch pulled in over 8,600 yards of reception yards and scored 67 TDs. 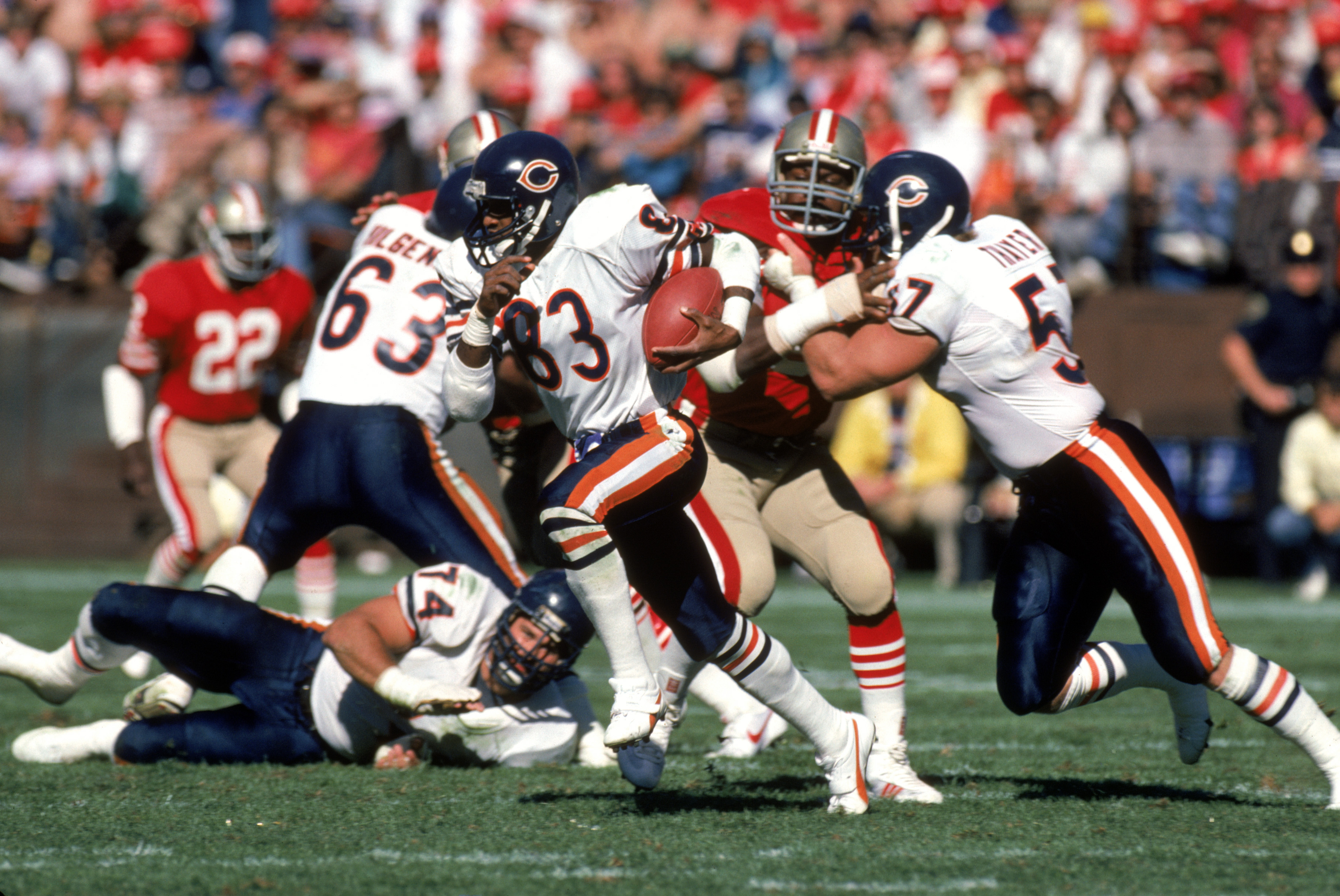 Gault was a 110 meter hurdler and a member of a world record-setting 4 x 100 meter relay team, who would have gone to the 1980 Summer Olympics if the United States had not boycotted the event.

Gault, a member of the Chicago Bears Super Bowl XX Championship team, finished his 11 NFL seasons with 333 receptions for 6,635 yards. 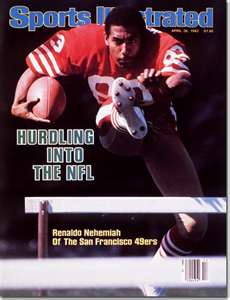 Renaldo Nehemiah was the world record holder and the first man to run the high hurdles in under 13 seconds. He was ranked number one in the world for four straight years.

He worked out for several NFL teams before decided to play for the 49ers.

During his three years as a wide receiver he caught 43 passes for 754 yards, a 17.5 average, and 4 touchdowns. 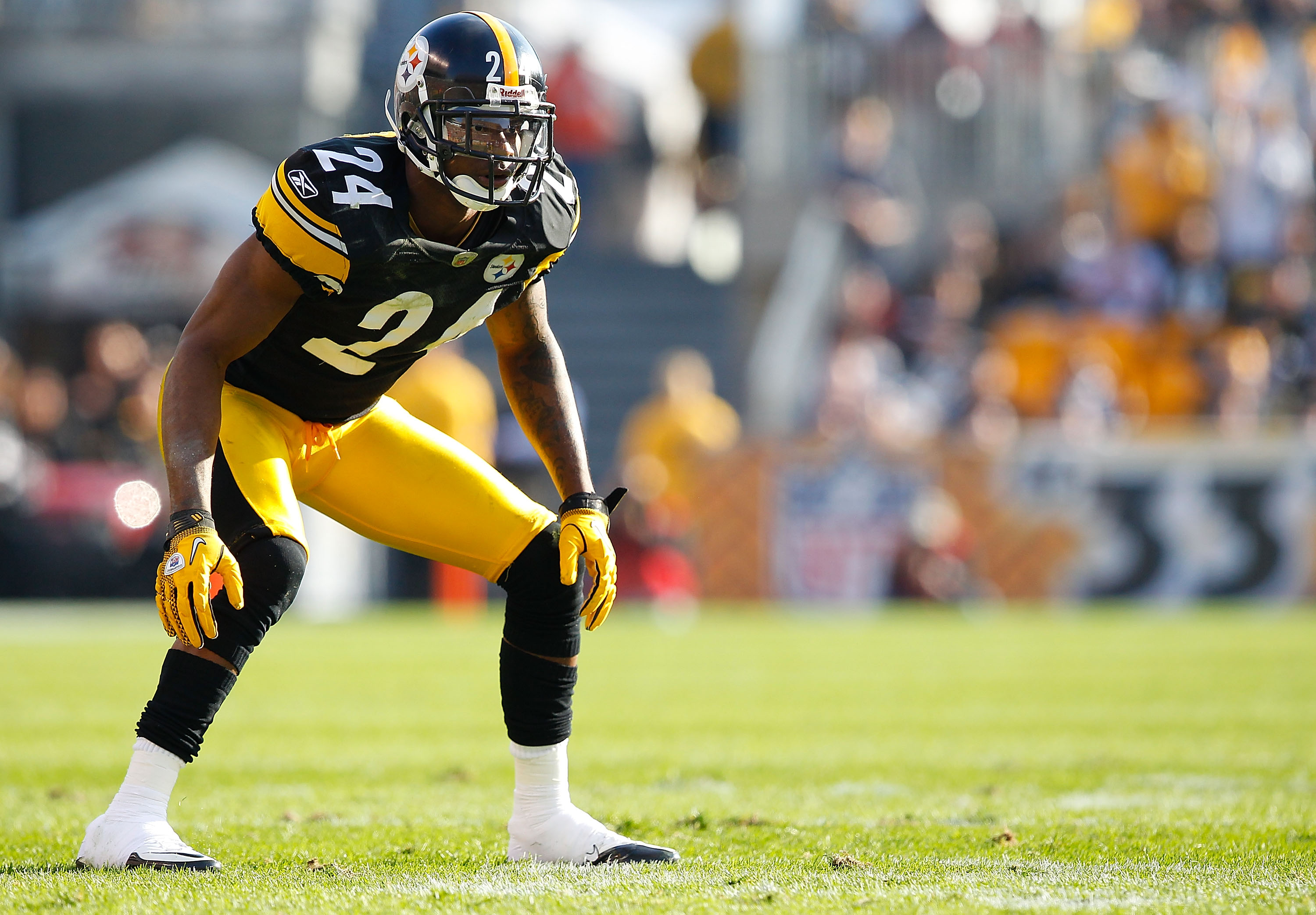 Ike Taylor took a unique path to get to the NFL.

Taylor walked on at University of Louisiana-Lafayette, but was academically ineligible his first two years.

For his first year playing in college, he was a running back. Before his senior season, Taylor asked to be moved to cornerback. He started the season at the right cornerback spot and recorded 46 tackles, eight passes defensed and two forced fumbles.

He was not invited to the NFL Combine, but he allegedly ran an unofficial, hand-timed 4.18 seconds in the 40-yard dash.

With that, the Steelers drafted him, and Taylor has never looked back since, playing on both of the XL and XLIII Super Bowl Championship teams. 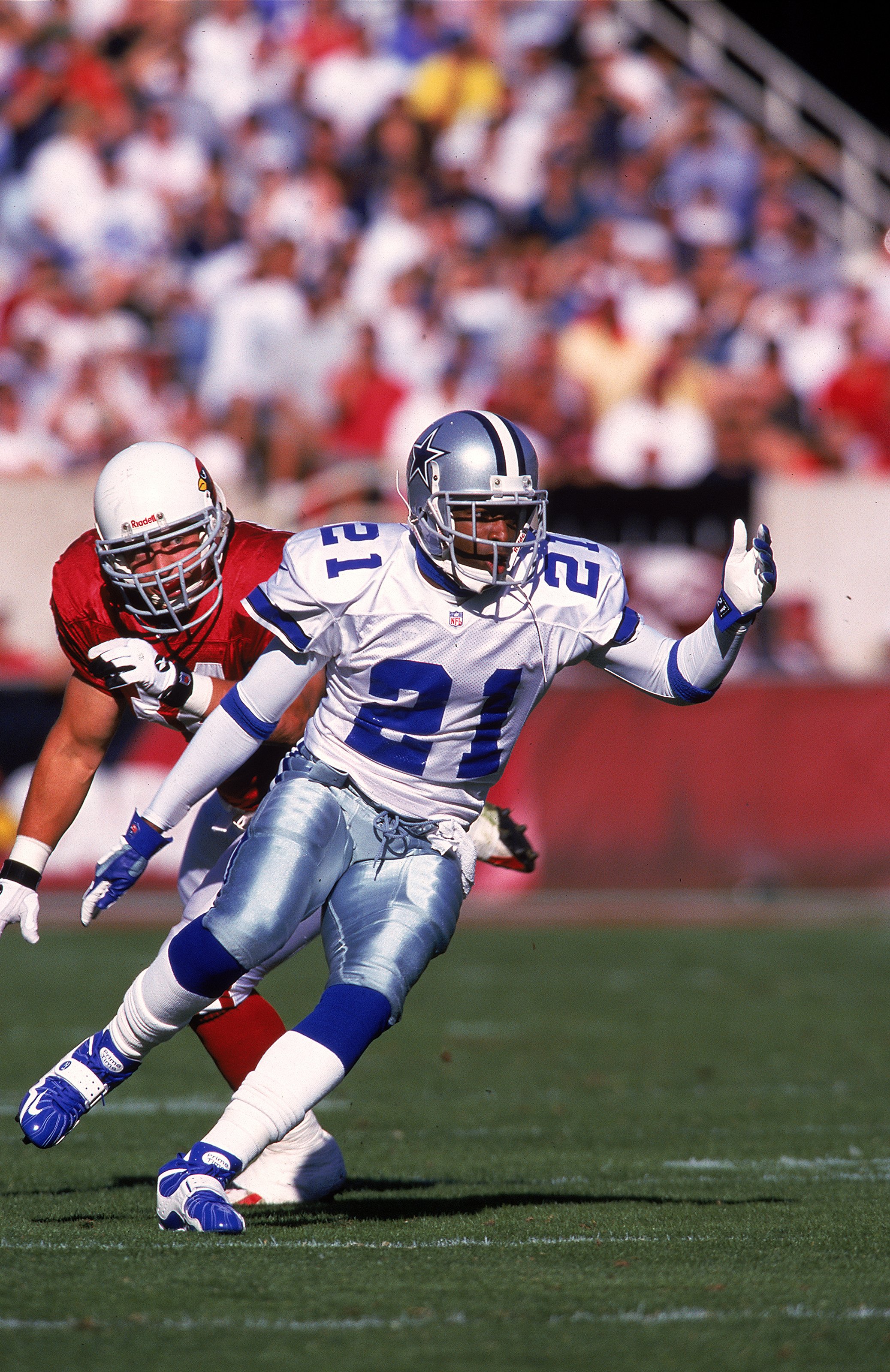 Deion Sanders was one of the most electric players in NFL history.

His 19 defensive and return touchdowns are an NFL record. 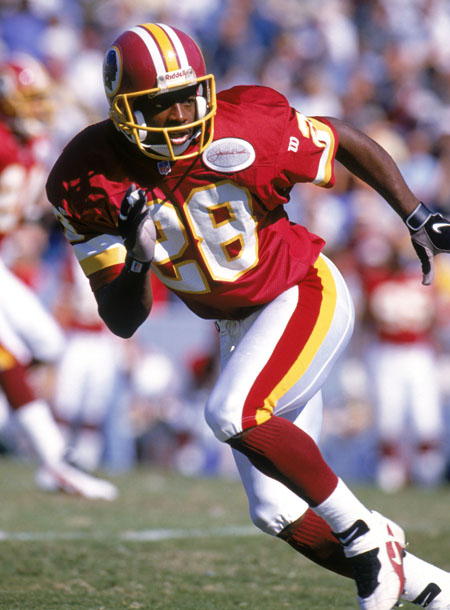 Darrell Green was one of the most incredible athletes to play in the NFL.

Not only was he good for the first several years of his career, he continued to play at the highest level into his forties at a position that few make it into their mid-thirties.

Green reportedly recorded a time of 4.09 at the Washington Redskins’ training camp in 1986.

Green ran down from significant distances many of the fastest running backs and receivers to play in the NFL.

Green has said in interviews that the fastest time he has ever been aware of running is 4.15. 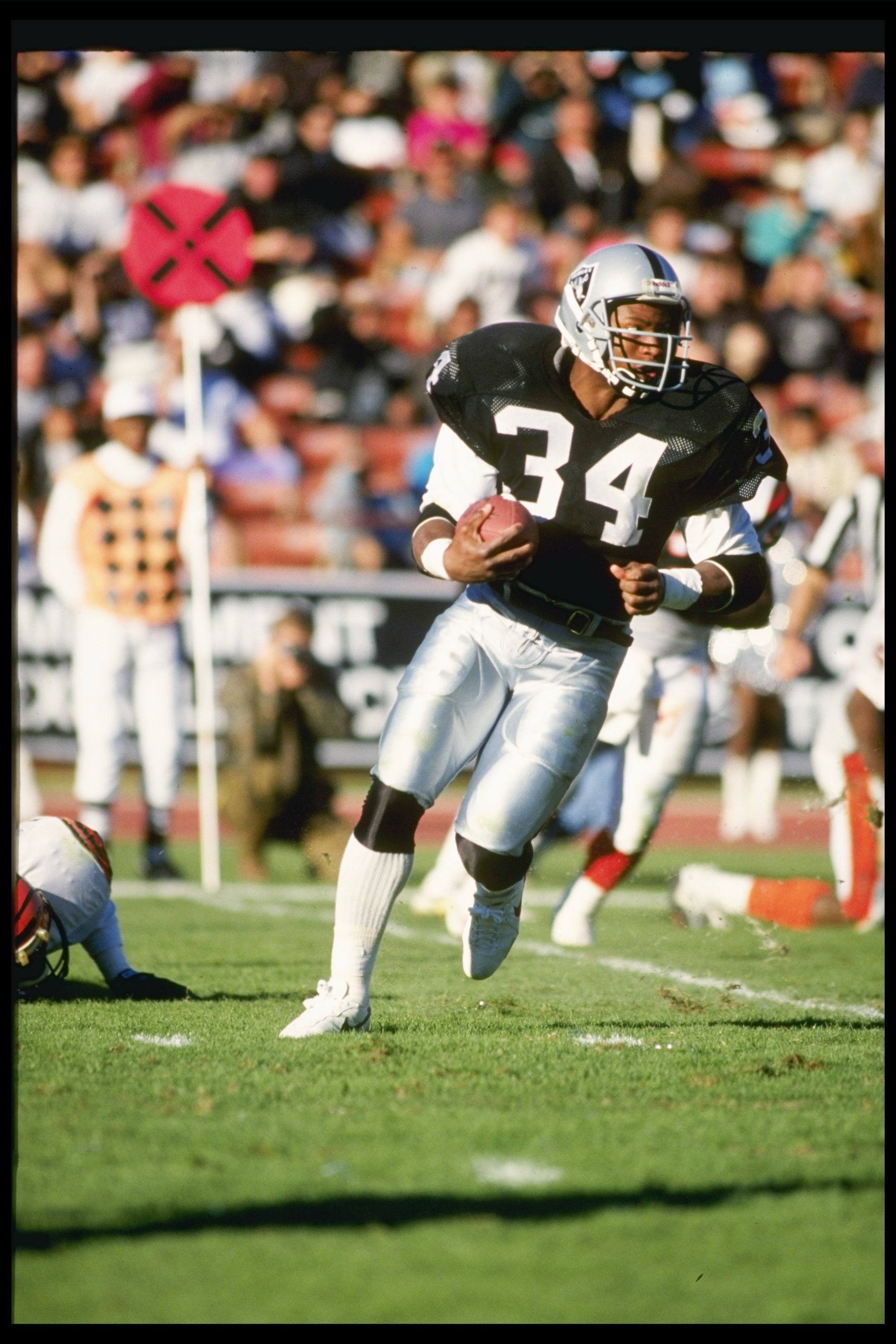 Bo Jackson was one of the most amazing athletes of our time.

He not only played in the NFL, but he also played major league baseball too.

He ran a blistering 4.12 seconds (hand-timed) 40 yard dash at the NFL Combine, which is still the fastest verifiable 40-yard dash time ever recorded at any NFL Combine. 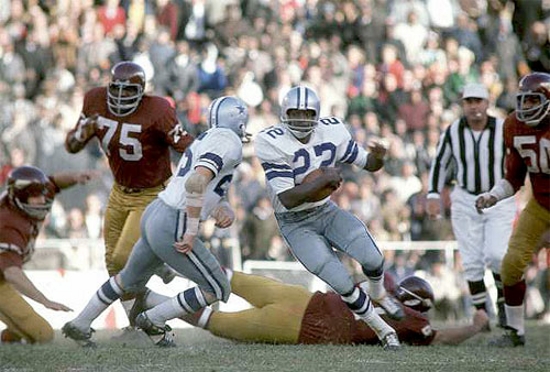 Bob Hayes is the fastest player in NFL history.

At the 1964 Summer Olympics in Tokyo, Hayes won the 100 meter and broke the existing World Record with a time of 10.06 seconds.

Hayes was a three-time Pro Bowler and was inducted in 2009 in the Football Hall of Fame.