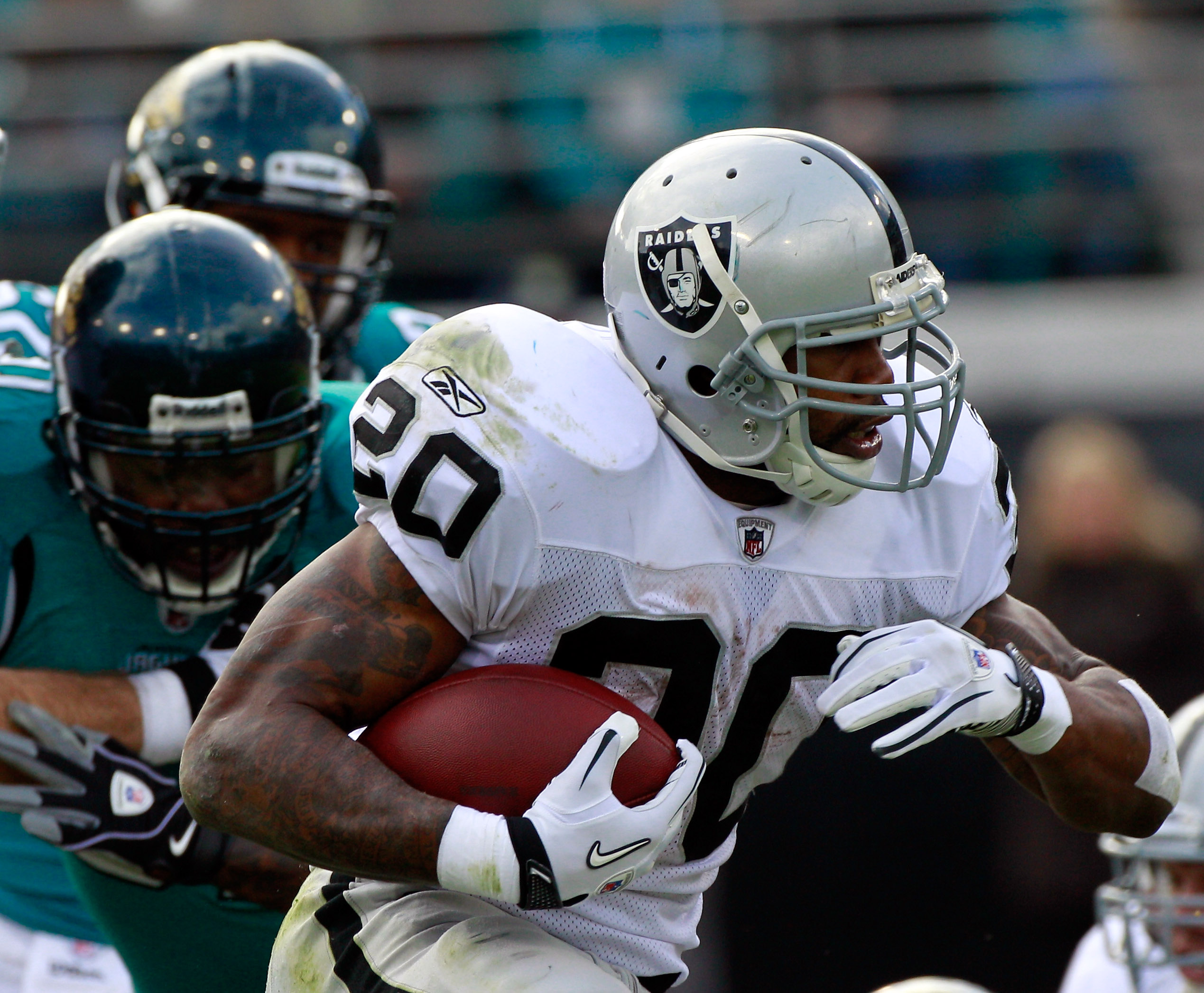 The Oakland Raiders took a step forward in 2010, with their first non-losing season since 2002.  They still have a ways to go before they can contend for the Lombardi trophy, but with a solid draft in a few weeks, they could possibly contend for the AFC West title.

However, the lack of a franchise quarterback could hinder their quest for their first winning season since 2002.

Jason Campbell should enter the 2011 season as the starting quarterback for next year, but I’m not sure if he is the long-term solution.  The Raiders will most likely miss out on the top quarterbacks due to not having a first-round pick, but they may use a second- or third-rounder to find a quarterback of the future.

The running back position is the strength of this offense, especially after Darren McFadden had a breakout season in 2010.  Pair him with power back Michael Bush, and you’ve got a very solid rushing duo.

The receiving group is solid overall, but it really lacks a No. 1 receiver.  Louis Murphy would make a solid number two option, and Jacoby Ford provides a good deep threat, but Darrius Heyward-Bey hasn’t come close to proving that he was worth the seventh overall pick.

Zack Miller has been a very solid receiving threat, and I expect him to be back in 2011, despite being a free agent.

The offensive line could use some work, but they may have found the left tackle of the future in Jared Veldheer.  Robert Gallery is a solid player, but he is a free agent who may not return for 2011.  The rest of the line needs work, but Bruce Campbell may get the opportunity to win a starting guard spot in 2011.

The defensive unit could be the strongest group on this team, with quality starters and solid depth.  The defensive end position is solid with Matt Shaughnessy and LaMarr Houston as good young starters.

Richard Seymour, Tommy Kelly, and John Henderson are all quality players at the defensive tackle spot.  One of those three won’t be a starter, but they’ll give the Raiders good depth on the interior of the line.

Kamerion Wimbley had a breakout season in 2010, and he will be back next season after being franchised by the Raiders.  Quentin Groves is another player who came into his own last season at the other outside linebacker spot.

Rolando McClain was a steady presence who should be a force in the middle for years to come.

Nnamdi Asomugha is one of the best cornerbacks in the league, but he is a free agent and it’s unclear if he will return.

Stanford Routt was a free agent, but he was re-signed, which gives the Raiders at least one solid starter.  The depth at corner is a concern, and if they lose Asomugha, they will have a huge hole at the cornerback spot.

The safety spot was average, but it could really be bad in 2011 if Michael Huff isn’t brought back as a free agent. 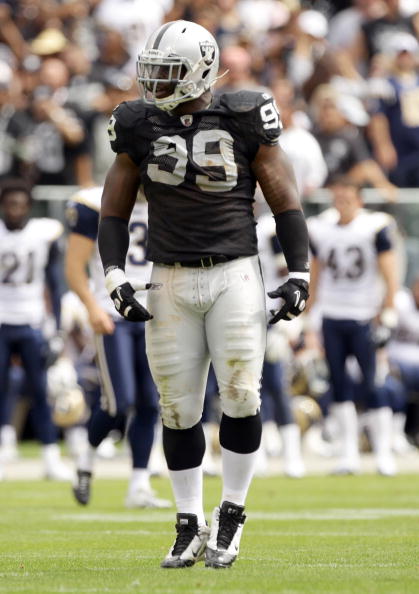 1. (8) ILB Rolando McClain, Alabama:  He wasn’t anything spectacular in his rookie season, but he turned in an impressive performance that will make him a key cog in the Raiders defense.  15 GP/ 15 GS

2. (44) DE LaMarr Houston, Texas: Houston has a lot of talent, and he can provide versatility with his ability to play defensive tackle as well.  16 GP/ 15 GS

3. (69) OT Jared Veldheer, Hillsdale: He developed into the starting left tackle, and he will only continue to get better in the years to come.  16 GP/ 11 GS

6. (190) OLB Travis Goethel, Arizona State: Goethel didn’t get much playing time, but he should make a solid backup next season.  8 GP/ 0 GS

Summary:  This wasn’t a spectacular draft by any stretch of the imagination, but the Raiders got a few solid starters for the future. 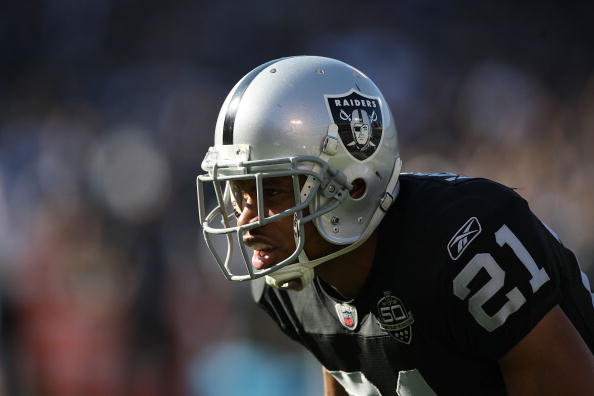 This will become a very significant need if Nnamdi Asomugha isn’t back in the silver and black in 2011.  He is a shutdown cornerback who gives the Raiders a guy who can cover other teams’ top receivers.

Stanford Routt will be back next season, and he is a very solid starting cornerback.  He got a lot of attention last year across from Asomugha, but he held his own.

The depth on this team is extremely weak, with Chris Johnson and Walter McFadden as the primary backups.  The Raiders desperately need to improve this position. 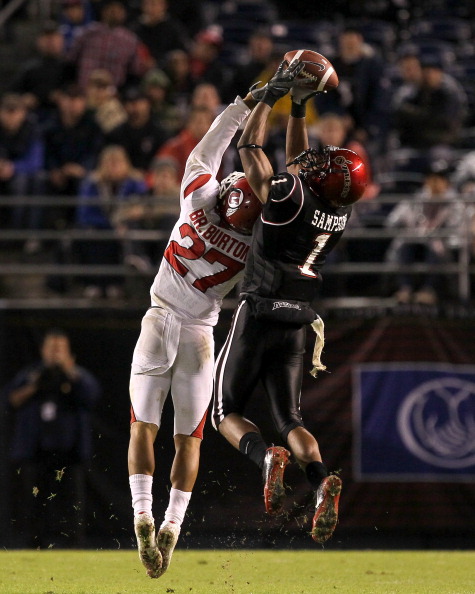 I wouldn’t be surprised to see the Raiders take two corners in this draft.  They may have to find another starter, but they could find one with either Brandon Burton or Curtis Brown.

Guys like Gilchrist and Chykie Brown can provide good depth in the later rounds. 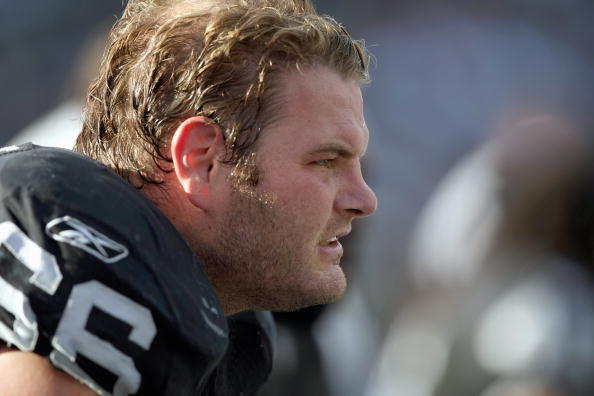 Robert Gallery is a free agent and I really think he could be elsewhere next season, as the Raiders could choose to spend their money on other needs.

Cooper Carlisle is getting older, and I think the Raiders should look to find a replacement for him this season.

Bruce Campbell could get that opportunity, but he didn’t really show that he was ready for the job with his play last season.

Even if Gallery is back, I still think that this is a need.  As I said, Campbell may not be ready to take over, and the depth could be a problem, too. 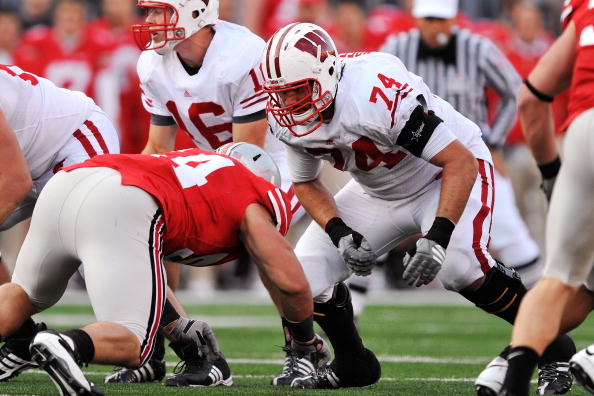 Round Three: John Moffitt, Will Rackley

This is a position that the Raiders will probably not use a high pick on, because I think that they have confidence in Bruce Campbell.

However, Rackley or Moffitt would be a good long-term replacement for Cooper Carlisle at one starting position. 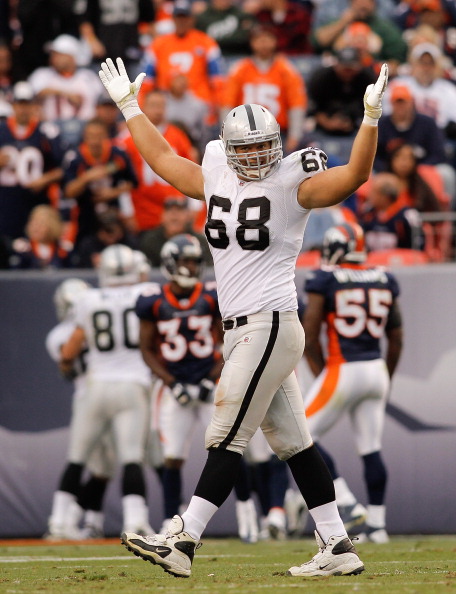 Jared Veldheer was a pleasant surprise, coming out of a small school as a rookie and becoming a respectable starting left tackle.  He will be the starter again in 2011, and he should only continue to improve with more experience.

Neither Langston Walker or Mario Henderson are the solution at the right tackle position, and it is imperative that the Raiders find an upgrade for them.

The Raiders may be content having Henderson move into the starting right tackle position, but I think that they need to find someone who has better long-term position to fill that role. 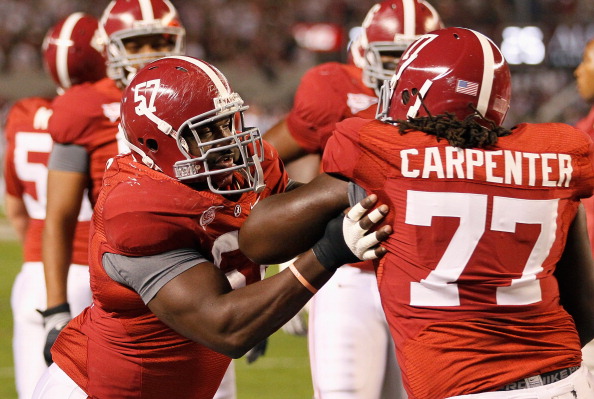 I think using a third- or fourth-rounder on an offensive tackle would be a wise move for the Raiders.

That player may not start next season, but it would give them a long-term solution at right tackle other than Henderson. 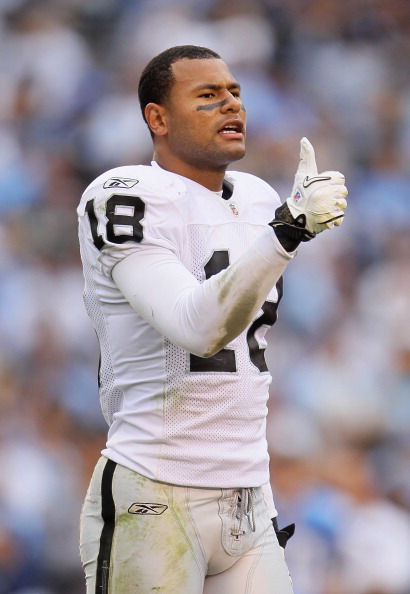 Louis Murphy is a very solid receiver, but I don’t see him as a No. 1 option.  That is something that the Raiders are lacking on this team, and I think they need to address to help improve their offense.

They may have thought that Heyward-Bey would be that top receiver, but I don’t see that happening.

The depth is pretty solid, but the Raiders are lacking a top talent.  They may not find that in 2011, but they could take someone in Round 2 or 3 to groom into a future starter. 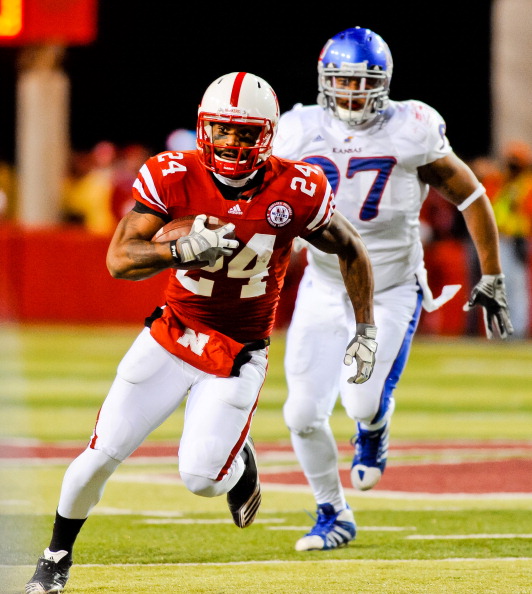 Smith or Little could challenge for a starting spot in 2011, and they may have the potential to become No. 1 receivers.

They may take a chance on DeAndre Brown, who has the potential to be a No. 1 starter if he can improve his attitude. 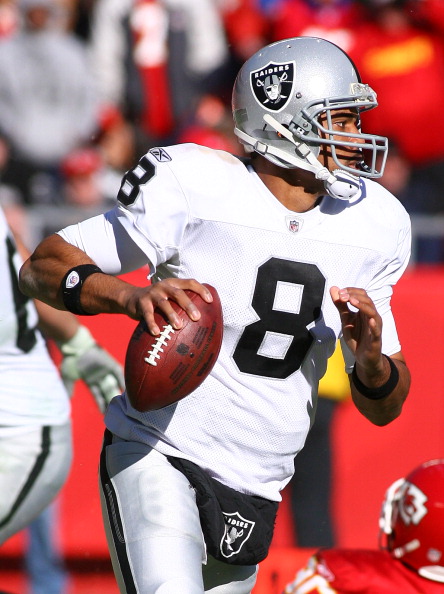 Jason Campbell will be the starter for now, but I don’t see him as a long-term solution.  He started to improve down the stretch last year, but his starting spot isn’t necessarily secure.

Kyle Boller will be back next season, and I wouldn’t be surprised if Bruce Gradkowski is brought back to give some the Campbell some competition for the starting spot.

The Raiders may opt to use an early- to mid-round pick on a quarterback who they can groom to be the franchise quarterback of the future. 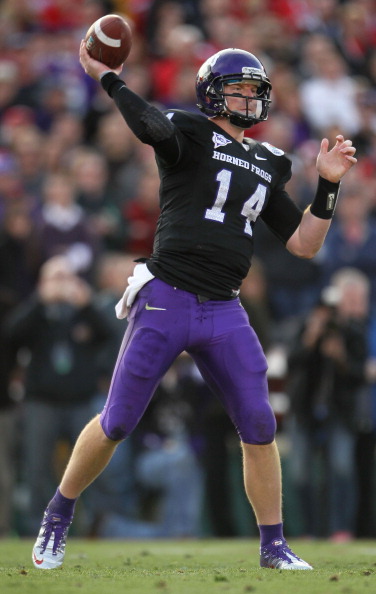 I don’t think the Raiders will use a lower-round pick on a quarterback, but they may take someone like Stanzi or Kaepernick in round two or three to develop into a starting quarterback.

The lack of a first-rounder could hurt them in their quest to find a long-term solution at quarterback. 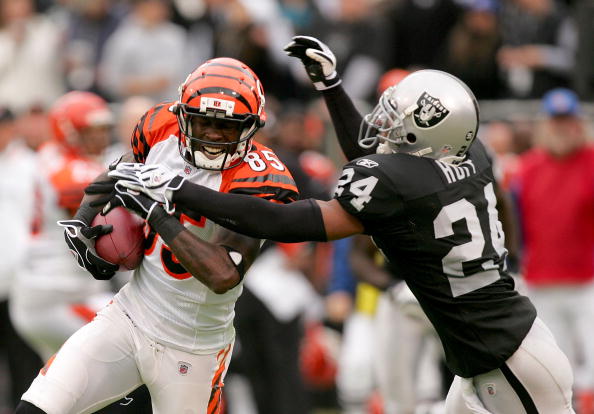 Safety: Michael Huff and Tyvon Branch are an adequate safety combo, but Huff is a free agent and he may not be back.

Center: Samson Satele is a free agent, and even though I think he’ll be back, it’s possible that he could be elsewhere next season.

Tight End: Zach Miller has been the leading receiver for a few years now, and if he’s not back, it’ll leave a huge hole in the passing game. 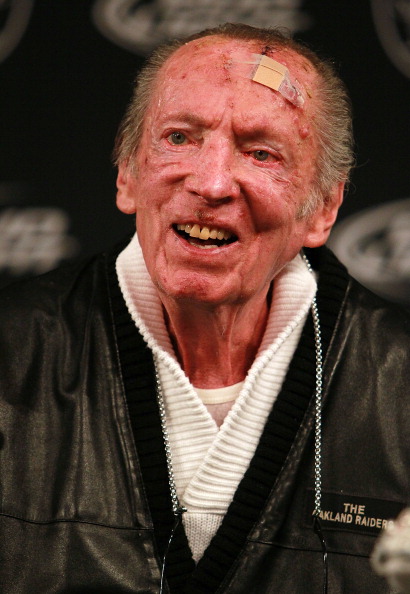 The Raiders are closer to contending than some people may think.  If they have a solid draft this year, they could conceivably contend for the division title next season.

However, their offense needs some work, and I expect the majority of the picks this season will be used on offense.  The lack of a franchise-level quarterback will also be a hindrance moving forward, as Jason Campbell can be hot and cold at times.

Al Davis has had a penchant for drafting excellent athletes in years past, and I don’t expect that to change as long as he is in charge.

The main need is on the offensive line, as they don’t have much talent and need to provide Campbell with some better protection. 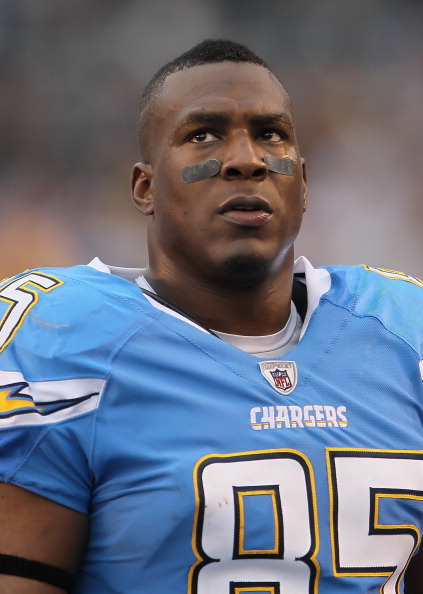