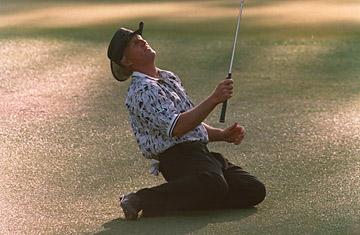 No athlete in sports wants to be remembered as choking on the big stage, but it happens in every sport. You can look at Bill Buckner in the ’86 World Series, the Houston Oilers blowing a 32-point lead to the Buffalo Bills in the ’92 AFC Wild Card game, or the epic meltdown by Jean Van de Velde at the ’99 British Open.  These are some of the most memorable choke jobs in sports history.

Just imagine, all eyes are on you, and everyone not only thinks you’ll win, but it’s a foregone conclusion that you’ll win.  Then, you blow it.

Here are the top 10 chokes in the history of Masters. 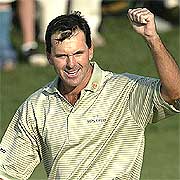 Len Mattiace shot a final round 65 at the 2003 Masters, but bogeyed the final hole, which ended up putting him in a playoff with Mike Weir.

Perhaps it was the wait for Weir to finish and start the playoff, but once the playoff started, Mattiace’s game seemed to have already clocked out.  He pulled his second shot into the trees.  He did manage to give himself a par putt, but that putt nearly rolled off the green.  He’d miss the bogey putt coming back before settling for double-bogey, and giving the green jacket to Weir. Cameras caught Mattiace crying shortly after. 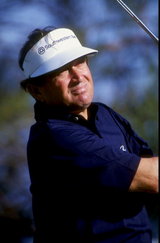 Ray Floyd entered the final round of the 1990 Masters with a four shot lead, and at 48-years old, was looking to become the oldest player to win the Masters.

On number 17 he stood over a birdie putt and a chance to increase his lead.  Three putts later he found himself in a tie for the lead.  He ended up in a playoff with Nick Faldo, the previous year’s champion.  On the second playoff hole he hit his second shot into the water.  Faldo ended up sinking a 6-inch par putt for the victory. This was not the first or the last time someone would choke and hand the Masters to Faldo.

After the tournament Floyd said, “The pressure basically got to me. Isn’t that choking?” Yes. Yes it is. 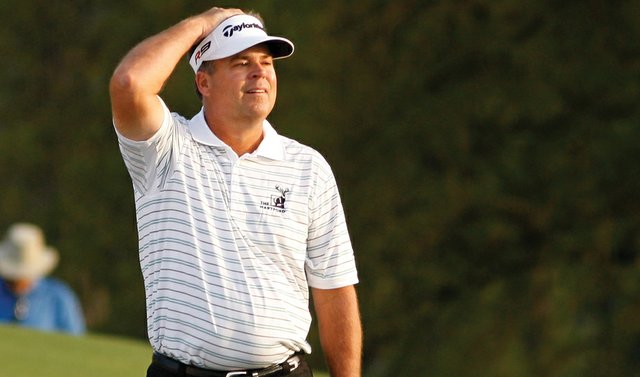 During the 2009 Masters, Kenny Perry went 22 consecutive holes without a bogey, and after a magnificent tee shot on number 16, found himself in the lead by two with two holes to play.

On number 17 he hit his second shot over the green, then bladed his chip back across the green, and ended up with a bogey.  Still, he had a one shot lead with one hole to play.  He put his tee shot on number 18 in to the bunker, but managed to give himself a chance to win with a 15-foot par putt.  He nearly made the putt, and tapped in for another bogey. 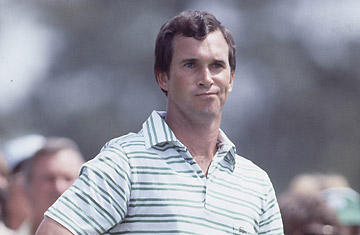 In 1978, Gary Player played one of the greatest final rounds in Masters history when he shot a 64.  Hubert Green was down one shot heading into the last hole.  He hit an outstanding second shot, and left himself 3 feet for birdie and a tie with Player.  A playoff was inevitable.

As Green stood over the putt, he was distracted by a radio announcer close by.  He backed away, then stepped up to the three foot putt again, and…missed, pushing it to the right.  Game over.  After the tournament, Green did not make any excuses, and said the distraction from the radio announcer was not the reason he missed the putt. 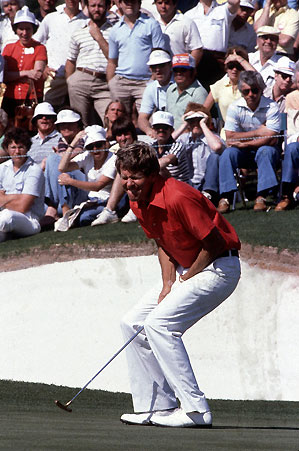 Ed Sneed came into the final round of the 1979 Masters with a five shot lead, and headed into number 16 with a three shot lead.

On number 16, Sneed missed his putt for par, and tapped in for bogey.  No matter, though.  He was still up two with two to play.  On number 17, he again missed a makeable par putt and tapped in for a bogey. OK, still up one with one hole to play.  On number 18, Sneed stood over another par putt that would’ve given him the green jacket. He missed…again.  Another bogey, and a playoff with eventual winner, Fuzzy Zoeller.  He was up three with three to play, and he bogeyed each hole.  CHOKE! 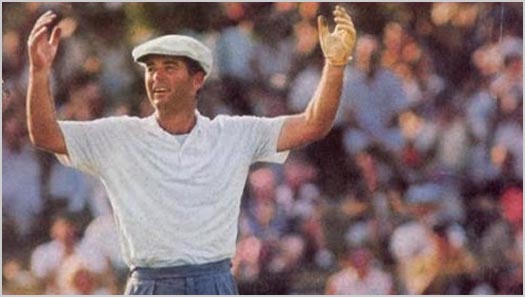 Ken Venturi entered the final round of the 1956 Masters with a four shot lead.  He was looking to become the first amateur to win the green jacket.

It wasn’t meant to be.  Venturi had four three-putts on the back nine and ended up with an 80.  Get this, he only lost by one stroke to Jack Burke Jr., and Burke Jr. started the day eight shots back from Venturi, making this the biggest come-from-behind win in Masters history. 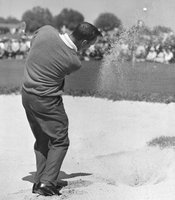 How did the great Arnold Palmer make this list?  Well, it all starts with Palmer leading by one shot over Gary Player, heading in to the final hole at the 1961 Masters.

Palmer’s approach to the 18th green ended up in the bunker behind the green.  Just get it close, get his par, and he’s the Masters champ.  Easier said than done.  He sent his sand shot over the green, through the gallery and down a hill where it settled next to a TV tower.

Palmer put his next shot on the green, about 15 feet from the hole, for a bogey and to force a playoff.  He missed the putt, taking a double-bogey, and giving the green jacket to Player. 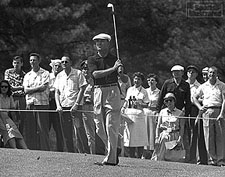 At the 1946 Masters, Ben Hogan, came to the 18th tee tied for the lead with Hermen Keiser, who had just completed his final round.  Hogan ended up with a birdie putt that would give him the victory.  He missed, but not to worry. He only had two feet left for his par and a playoff with Keiser.  He missed again; three-putting the last hole to give the Masters to Keiser.

Even all-time legends can CHOKE. 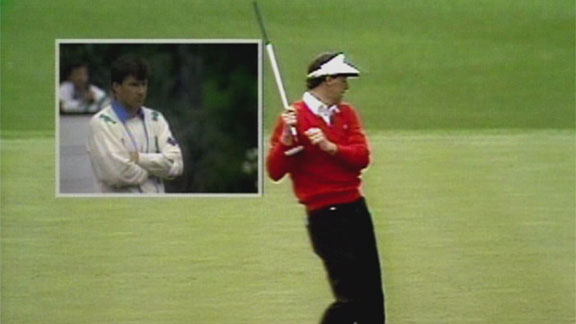 Scott Hoch had a one shot lead over Nick Faldo going in to the 17th hole of the final round at the 1989 Masters.  On 17, Hoch missed a four foot putt to fall back in to a tie for the lead with Faldo.  Hoch and Faldo remained tied after 18.  To sudden death!

Faldo bogeyed the first playoff hole. Hoch was putting for a birdie.  He missed the putt, but had less than two feet left for the par and the victory.  Inexplicably, he sent the putt five feet past the hole!  Luckily he made the five-footer coming back for bogey, but Faldo ended up winning on the next playoff hole.

After the tournament Hoch said, “I’m glad I don’t carry a gun with me.” 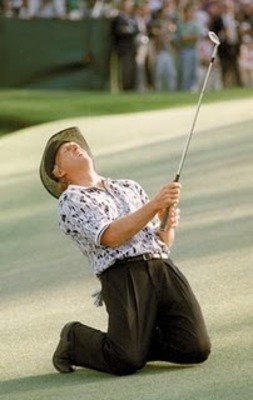 Greg Norman came into the final round of the 1996 Masters with a six shot lead over Nick Faldo (there’s that name again).

This wasn't a choke, as much as it was a total collapse.  I remember watching it in amazement.  Witnessing a great player that just couldn't do anything right.  Norman went through a downward spiral that was just painful to watch.  You hoped that somehow, someway, he would snap out of it and play as brilliantly as he had played all week, but it just kept getting worse with each passing hole.  Norman struggled all day on his way to a 78.  Faldo played very well on his way to 67 and another green jacket.

Norman came in with a six shot lead and ended up losing by five.  Faldo won three Masters championships.  All three are mentioned in this list because the person expected to win, CHOKED.