The Bad Guys: Ranking the 10 Most Hated Players in the NHL 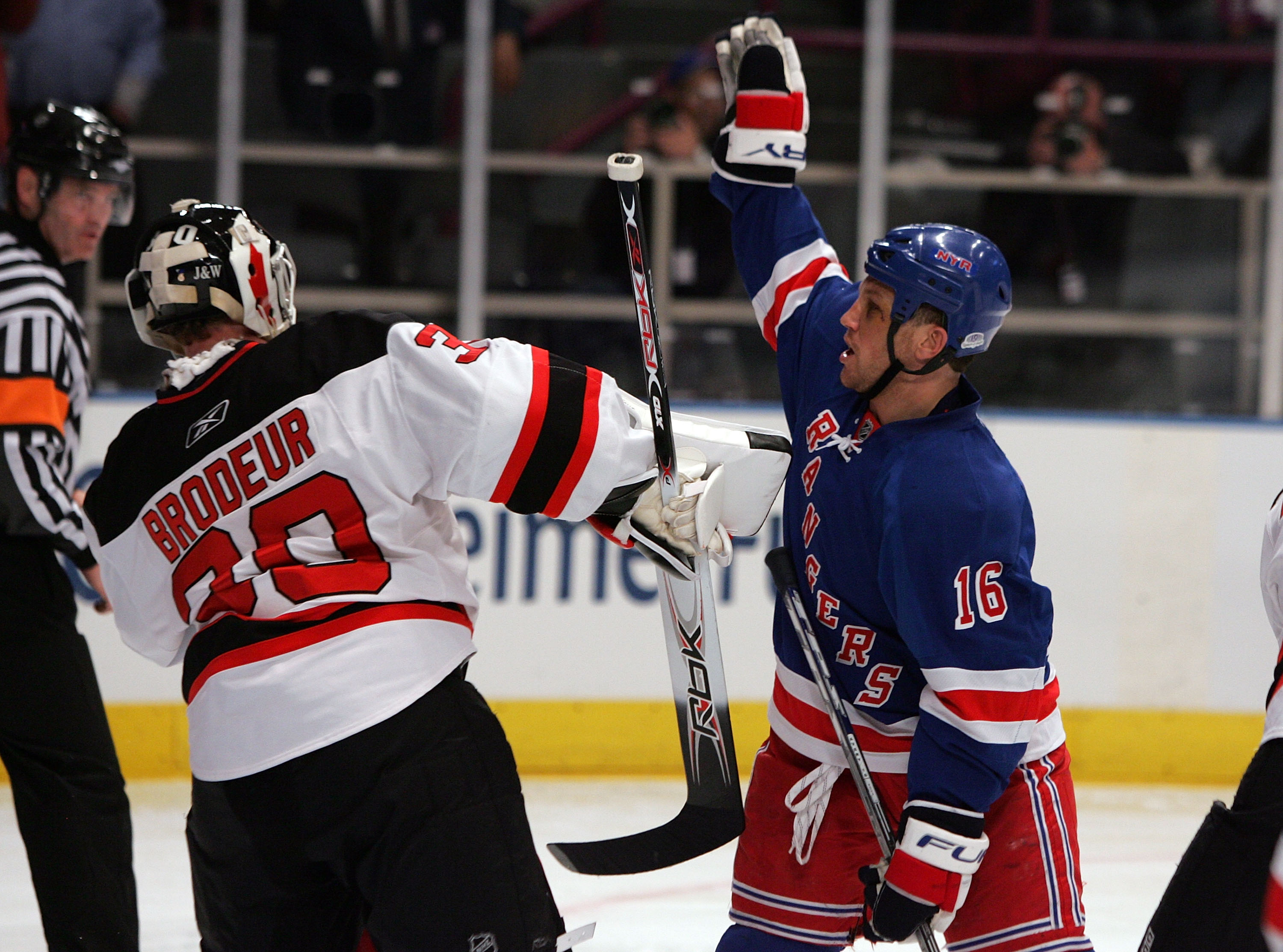 As long as there has been an NHL, there have been agitators, crybabies, divers, cheap shot artists and guys that just have trouble controlling themselves from raining hurt down on opposing players.

Who are the worst of the worst?

Some of the biggest names in the hated department have retired recently, Chris Simon and Darcy Tucker just to name a couple.

We begin an examination of the 10 most hated players in the NHL today, and why there are so many NHL fans around the world that enjoy booing them. 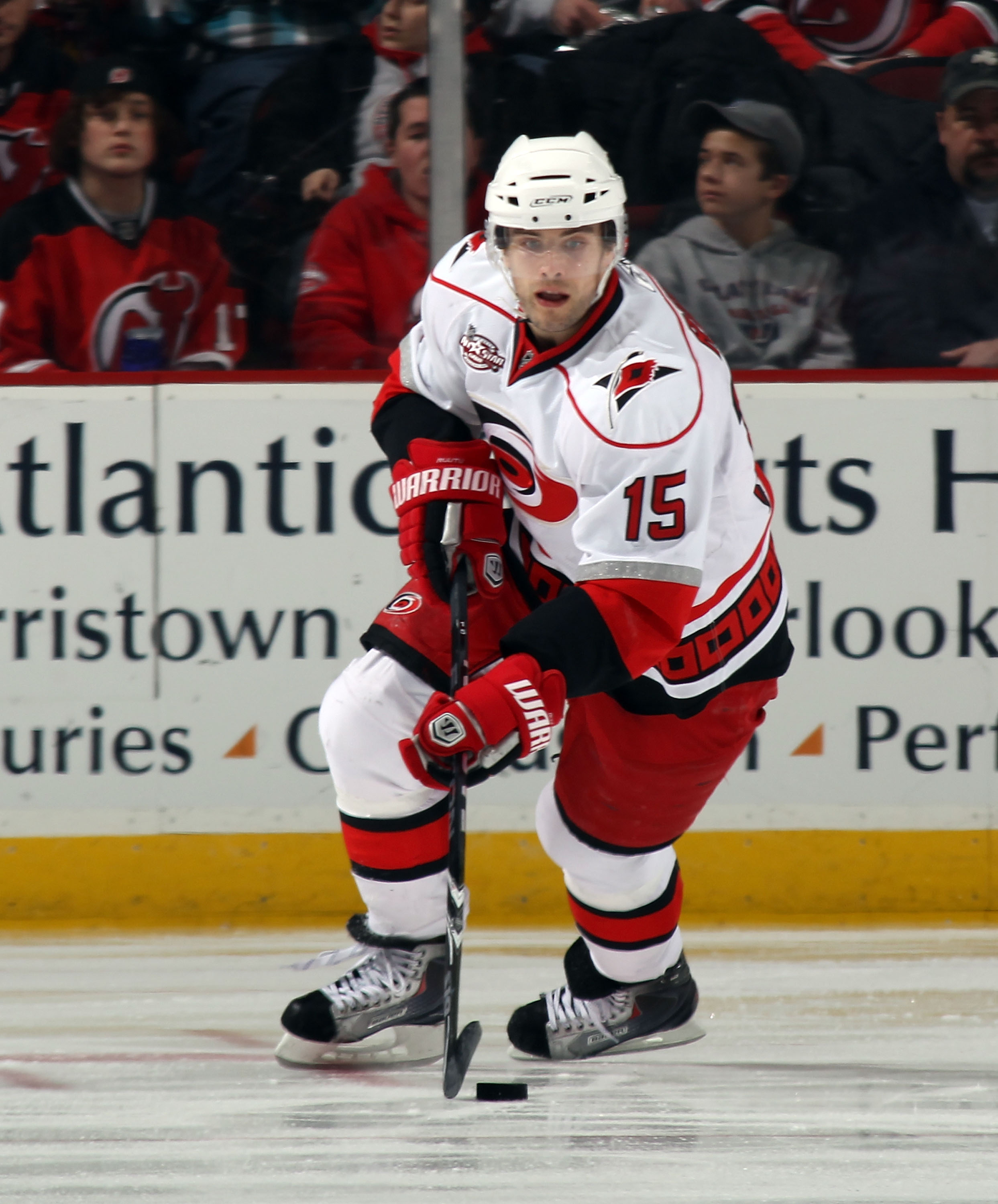 Tuomo Ruutu is a very talented player and most teams in the NHL would love to have him.

That doesn't mean hes very popular with any NHL city outside of Carolina. Like his brother, he will throw an elbow, spear you, slash you or do anything else that gives him a competitve edge to get in your head.

He can also knock you out with a thunderous open ice hit that sometimes bends the rulebook, just a little bit.

Something tells me Tuomo will not be the only Ruutu on this list. 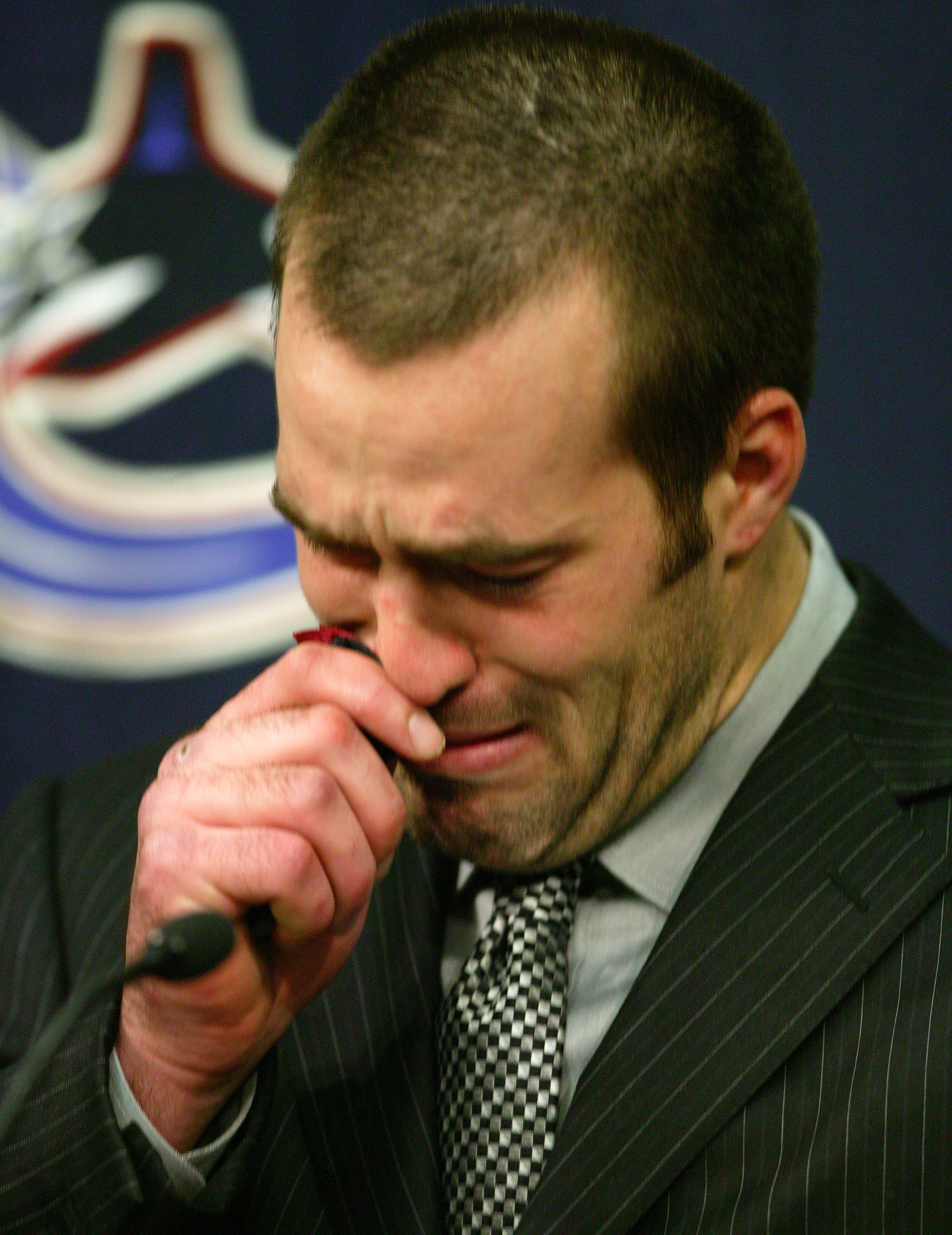 How one moment can define a career.

Todd Bertuzzi was sticking up for a team mate. There is no denying that

The problem is he ended someones career, and could have ended their life.

Bertuzzi knocked Colorado Avalanche forward Steve Moore cold, and then rode his body to the ice with his 6'5" 240 pound frame, causing injuries to Moore's neck, head, face and God knows what else. The actions resulted in Moore ending his NHL career prematurely.

Criminal charges, probation, suspension and one career over, and another tarnished forever. 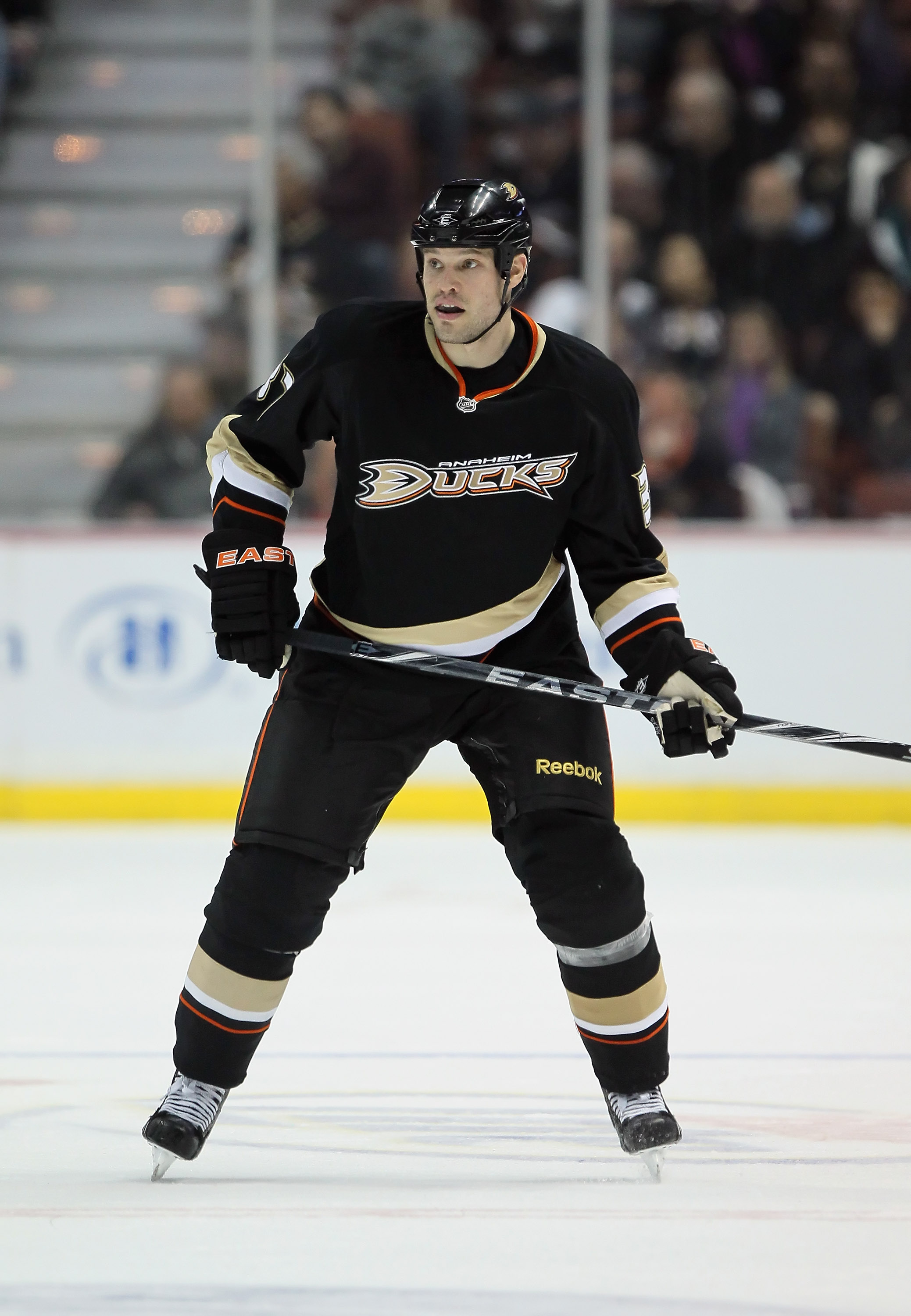 Agitator, pest, call him what you will. I'm sure the names he has been called on the ice are a lot more colorful.

He has been much maligned for the use of his elbows, stick and his mouth.

Ruutu once bit the gloved hand of Buffalo player Andrew Peters in a fight, then claimed that Peters stuck his thumb in his mouth.

He has been suspended for using his elbows and even was noted for hammering a crouching Jaromir Jagr in the Olympic Games. 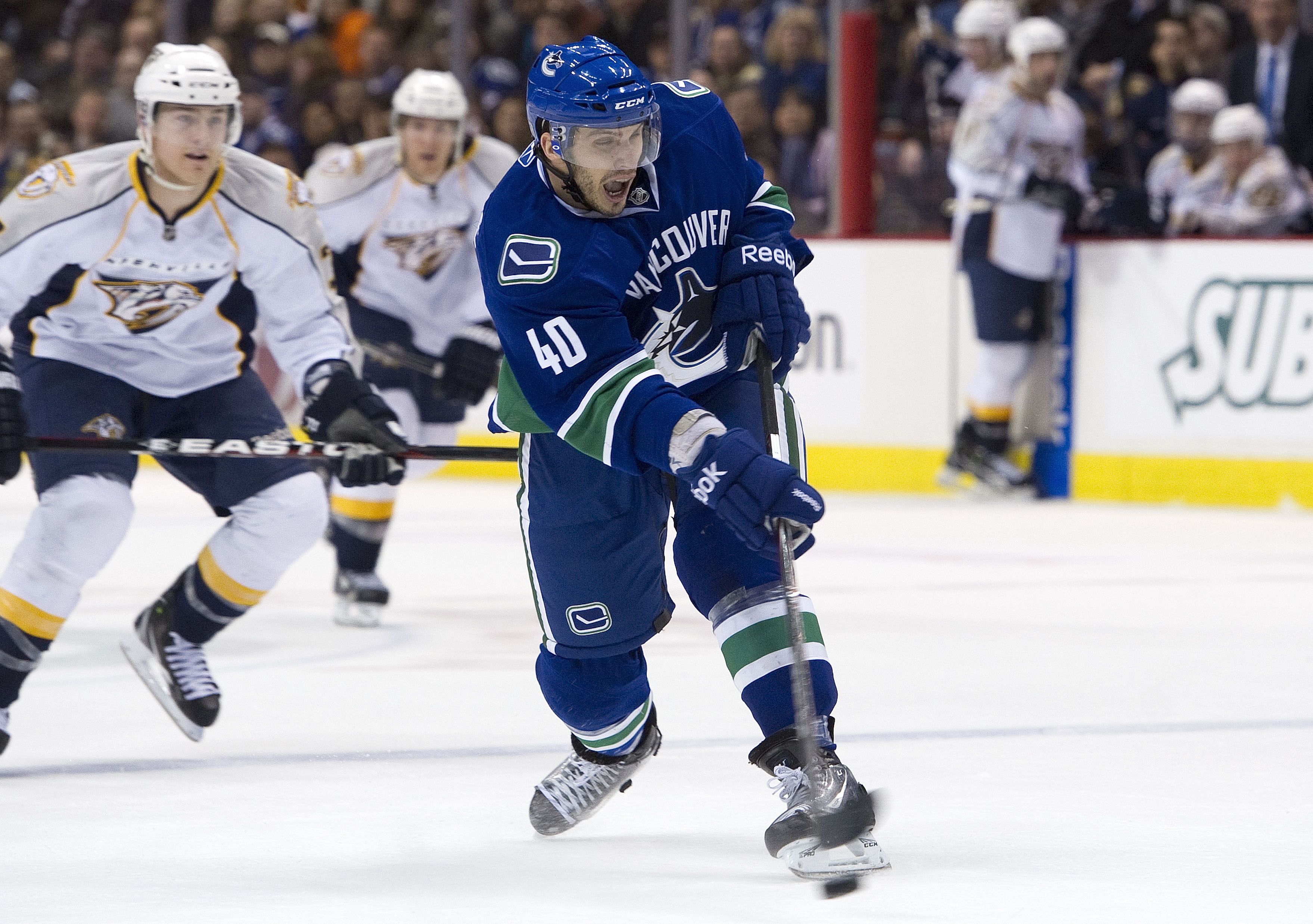 Hits from behind, diving and being a turtle when challenged will not make you very popular around the NHL.

Maxim Lapierre is not a guy that piles up penalty minutes. He's a guy that annoys the crap out of other players.

He once pushed Scott Nichol of the Sharks was from behind, and sending him barreling into the boards and causing an injury, but that's just the beginning.

Sometimes, it's not the severity of the attack that gets you hated in the NHL. It's a bunch of little things and Lappierre is a perfect example of this. 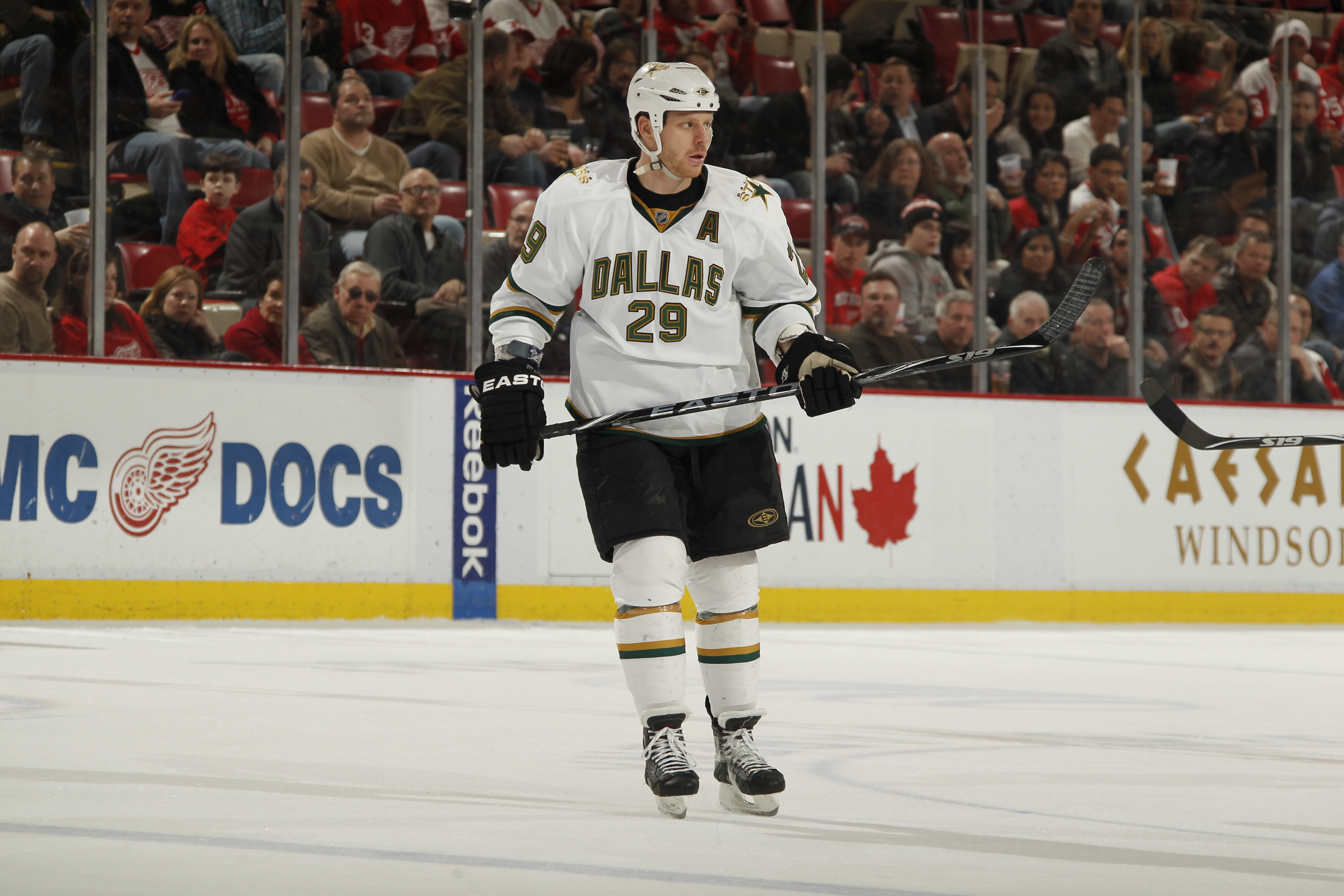 Steve Ott's antics have led to more than one major brawl with the Boston Bruins. He has also been linked to head shots, low bridging, hits from behind and more disturbingly eye gouging on Travis Moen.

Ott is more traditionally considered a brawler, but he can be the worst kind of player, a fighter who doesn't care if he hurts people.

At the very least he will drop the gloves and fight, unlike the player who is number one on this list. 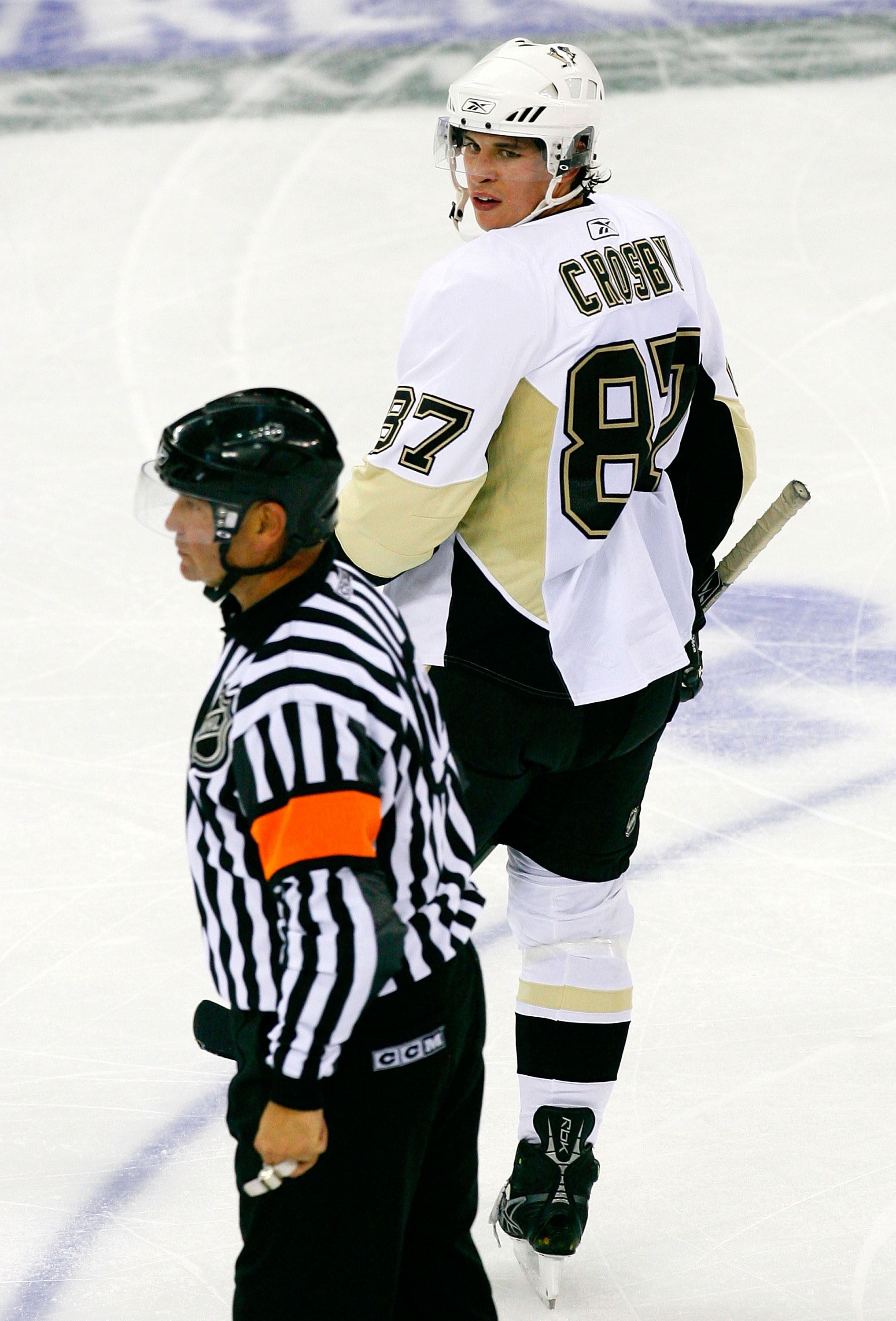 A Familiar Position for Sid - Complaining to the officials.Kevin C. Cox/Getty Images

There is no denying Crosby's incredible talent. There is also no denying his immaturity, and every NHL city outside of Pittsburgh knows it.

I know what you are thinking. Sydney Crosby? The face of the NHL? The NHL's poster child? As long as there has been superstars in this league, there are people that hate them.

Crosby is no different, and he takes it a step further with his antics.

It's not just that he is the best player in the NHL. Crosby has garnered a reputation for being a whining, diving, fight starting and then running coward.

The video is here - http://www.youtube.com/watch?v=4wqR17KrLKw

Search Youtube and you will find endless videos of Crosby complaining, and some hilarious compilations of signs and banners fans have made to goad Sid the Kid are legendary.

This is your NHL's ambassador for the future?

God Help us all. 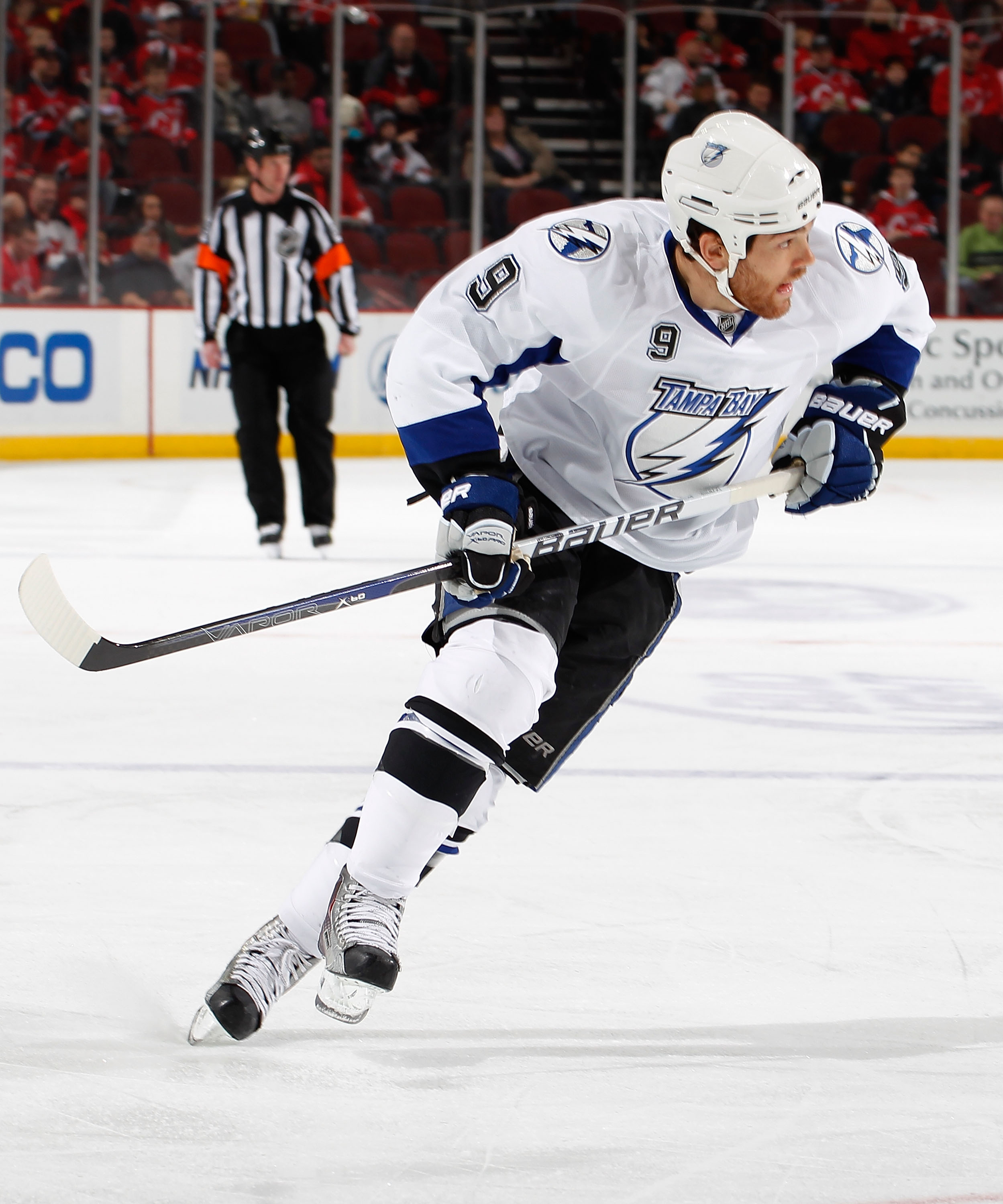 Downie no doubt trying to size someone up.Paul Bereswill/Getty Images

Here is a guy that makes no bones about what happens if you annoy him. It does not matter if you are a teammate, a referee or the opposition, you better have eyes in the back of your head when he is around.

Mr. Downie's rap sheet goes all the way back to junior,s when he knocked out the teeth of a teamate in practice.

He also got a 20 game ban in the AHL for slashing a linesman. No not Ken Linseman, a linesman.

Let's not also forget about absolutely tatooing Dean McAmmond in a pre-season game in 2007.

He has started to calm down a bit, except for being fined last year for trying to injure Sidney Crosby. 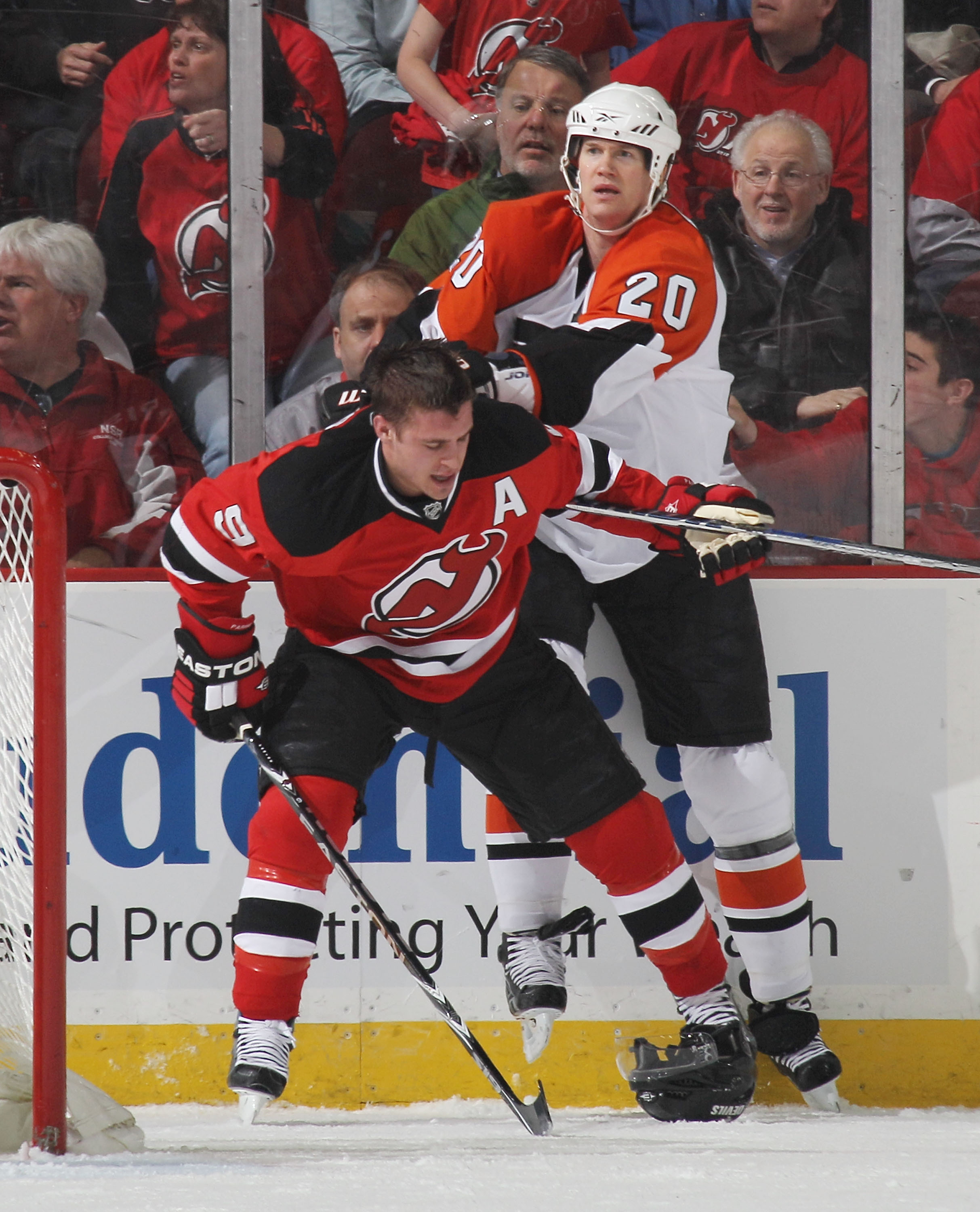 Pronger's indiscretions outnumber his accomplishments of a Norris Trophy, Stanley Cup and a Gold Medal.

He has been suspended a whopping 8 times in his career for a total of 22 games.

The infractions? Stick to the throat, slashing, boarding, skate stomping, kicking, cross checking, elbowing, leaving the bench to fight and a head shot.

The Hansen brothers? No.. Chris Pronger. 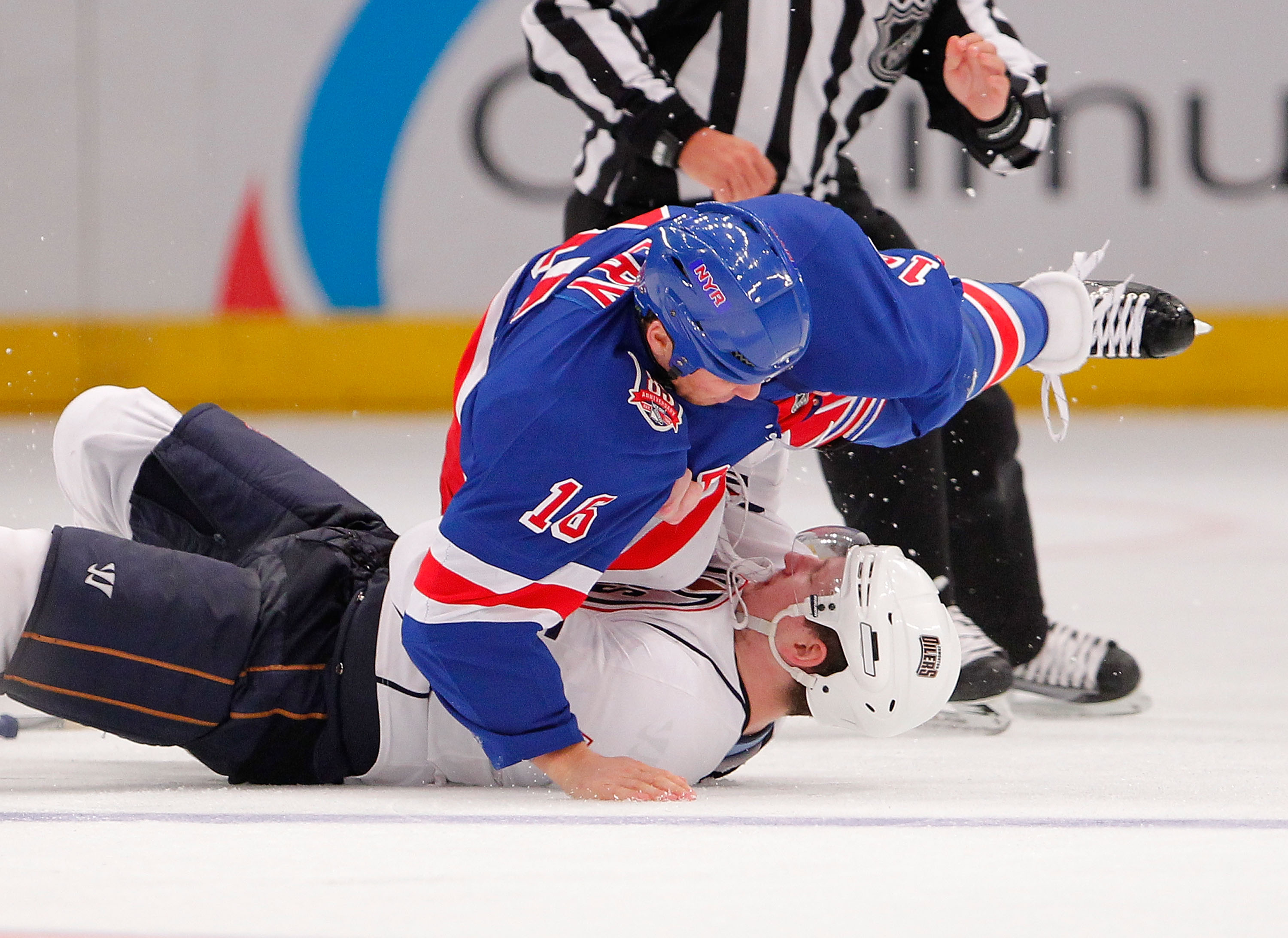 Where do we start?

Avery has done just about every vile thing you can do in the game of hockey, and some in his not so private life.

Despised by players, fans and even his own team mates for his antics that are almost to insane to believe.

In a playoff game with the Rangers he faced goaltender Martin Brodeur trying to distract him by waving his arms around like a drunk hailing a cab.

While with Dallas, he hammered Milan Lucic from behind setting off a major melee.

After breaking up with B list actress and Canadian beauty Elisha Cuthbert he made a comment to the Calgary media about how Cuthbert's new boyfriend then Calgary Flames defenseman Dion Phaneuf was enjoying his and I quote "sloppy seconds."

He was immediately suspended and drummed out of Dallas and wound up right back in New York on the Rangers.

His latest infraction had his own team mates miffed when he was challenged to a fight with Ladislav Smid of the Edmonton Oilers only to act like he didn't want to fight and then Avery punched Smid in the face when he turned away.

The incident is here http://www.youtube.com/watch?v=LNeERJeDnRM 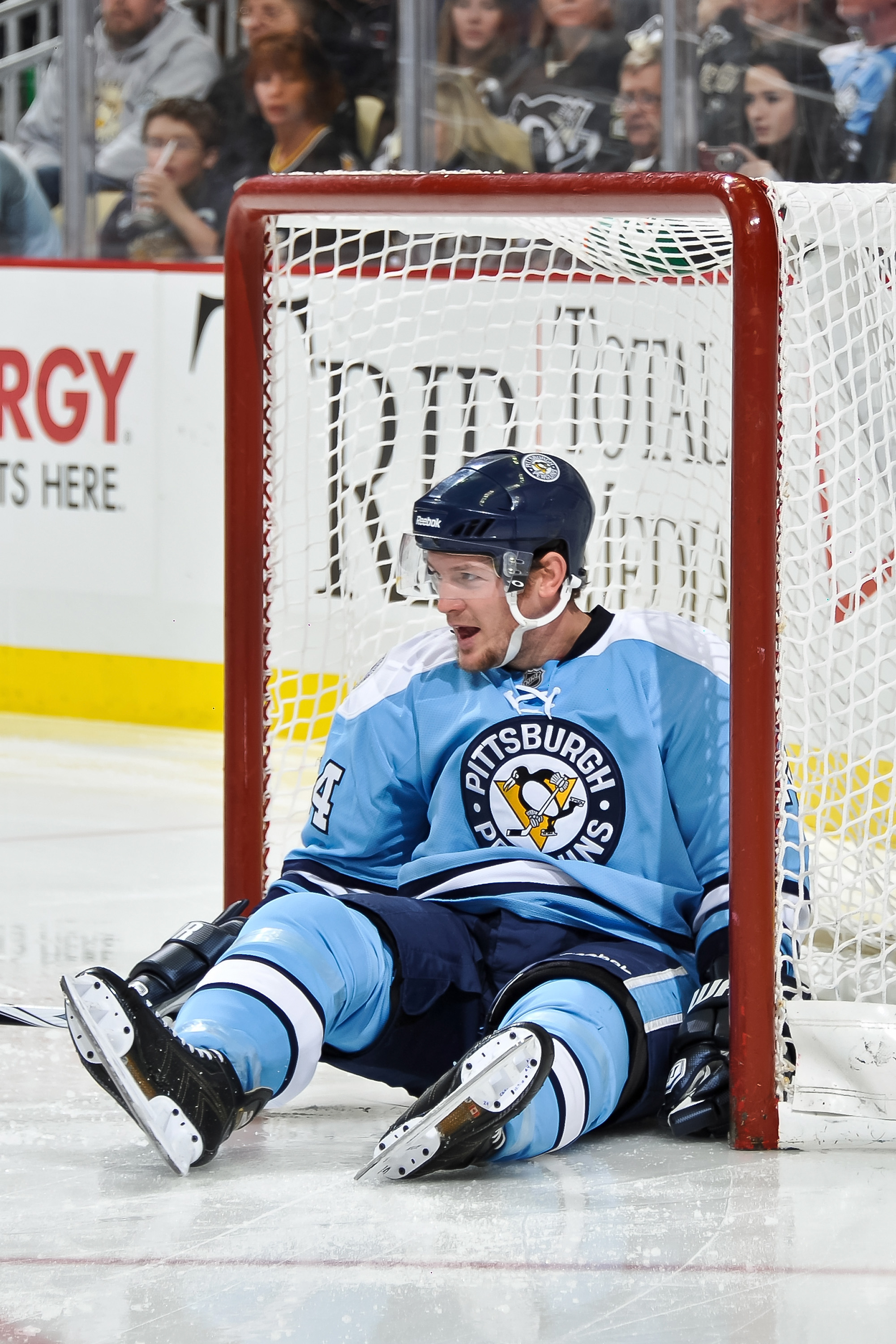 Whats amazing is not that Matt Cooke is number one on the most hated NHL player list. Whats shocking is how easy the choice of him as number 1 is especially with a guy like Sean Avery playing in the NHL.

If there is one guy that people will say should not be playing in the NHL because of on ice incidents its Matt Cooke.

He throws his body around in reckless abandon to anyone who happens to be in a vulnerable position without a care in the world.

He will hit your knees, head, back, face anything, as long as you are not in a position to retaliate or protect yourself.

He is the bad parts of Ulf Samuelsson, Scott Stevens and Sean Avery all rolled into one.

He basically went unpunished for maybe ending Marc Savard's career with this disgusting head shot from the blind side. Anyone who thinks this is a clean hit is not a hockey fan. 0:53.

Here is a compilation of cheap shot after cheap shot Matt Cooke has administered over his career with awesome commentary from Don Cherry.

Once your nausea subsides ask yourself how this guy still has a job in the NHL.

Let us not forget Matt Cooke also likes to run goaltenders. Rick DiPietro was run 3 separate times in the same game by Cooke.

In order to put a smile on your face after that disgusting compilation, here is one more to make you smile, compliments of Evander Kane.

Maybe Mario Lemieux should look at his roster before he calls anyone else's team disgusting.