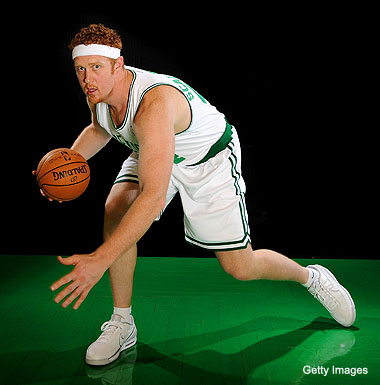 Some pieces of motion picture history are destined to stand the test of time and become classics for generations to come.

I've done the unthinkable and narrowed it down to the Top 10 best Scal videos out there today for your viewing pleasure.

Because everyone loves a ginger, right?

The dunk is ok, but what transpires on the bench afterwards is pure magic.

7/10. Be on the lookout for more Scal dance moves to follow.

Despite not playing in the 2008 NBA Finals, Brian bashes the media for picking the Lakers over his Celtics. He offers his insight on guarding Kobe Bryant and "breaks it down" for the media members who are so intimidated by him upon arrival that they can't muster a single question.

7/10 It's Brian Scalabrine talking trash, how could it not be epic.

"The Four Fouls in Under a Minute Fourty"

The headline pretty much sums it up. Scal comes in, is unfairly tagged with four quick fouls, and resumes his position on the bench.

Obviously, the best way to draw a charge is to throw your chest into the opponent, what do those darn refs know anyways?

The defense clearly would be a 10, but the refs poor calls bring it down to a 7/10. Don't worry Brian, you'll get your redemption.

This is the reason YouTube was invented.  Anyone can sing Santa Claus is Coming to Town, but how many can rap it?

The best part is that Brian has to read the lyrics off the paper.

8/10. Could we see a "Christmas with Brian" album in the near future?

With four seconds left in the third quarter, in comes Scal to inbound the ball to Rajon Rondo. Scal tries to do the smart thing by leading Rondo to help get the ball down the court quicker, but Rondo clearly falls asleep.

8/10. Might have been a nine if not for Doris Burkes annoying commentating.

Here we get an exclusive look at the rarely seen Scal stretching routine. Notice the depth he gets on that squat, the Celtics trainers must be proud.

8/10. Sorry ladies, I know what you're thinking and yes, Brian is a married man.

Scal shows off his tremendous dribbling skills while celebrating the Celtics first basket against the Lakers in the '08 Finals.

Did I mention he did so with a towel?

9/10.  If you're like me, you had to watch this video multiple times to truly comprehend the greatness of it.

Brian addresses a reporters question on how it felt to not play at all during the NBA Finals. Scal actually does a great job of turning an embarrassing question into a funny response.

"The Basketball Camp Dance Off"

Not sure where this is, but yes, it appears to be a Brian Scalabrine Basketball Camp. After a dance off to Michael Jackson, Scal orders youngsters to run a down and back.

I would sell a kidney to attend a camp like this.

The dance moves, along with the coaching expertise, ensure this clip with a 9/10.

A couple things to take away from this. First off, Scal is open for a good six seconds before his teammates even get him the ball.

Next, he throws a mean pump fake to Taj Gibson before owning Joakim Noah at the rim with a rare two-handed layup.

Take notice of the bench going crazy at around the 15 second mark.

Despite still being up eight, the Bulls realize what a momentum shift has just occurred, and quickly call a time out.

As soon as Scal hits the free agent market, the Bulls scoop him up to ensure he can never harm them like this again.

Given all that's going on and the resultant signing of Scal, this play deserves a 10/10.