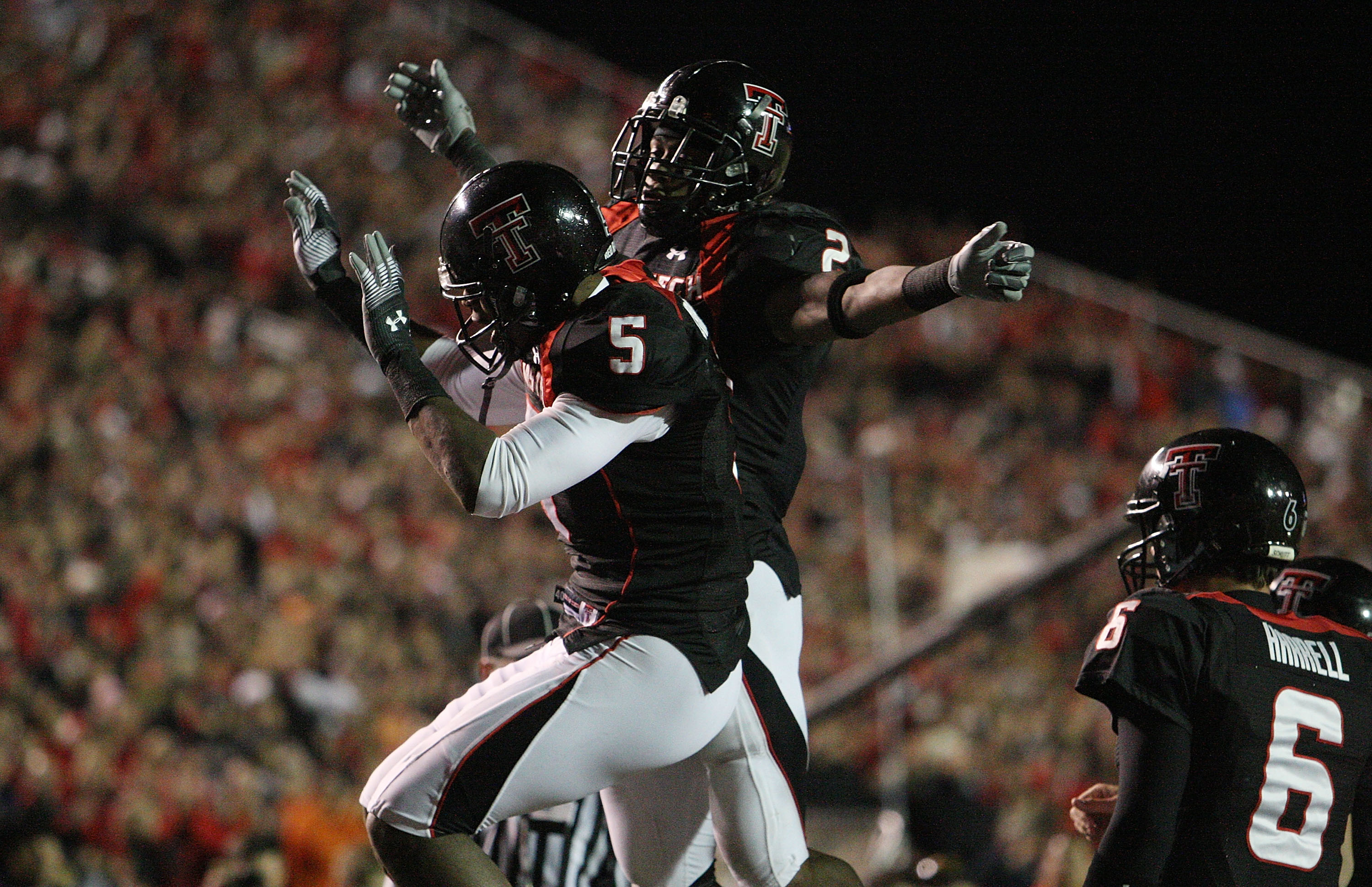 Whether a school has a great tradition of producing star receivers or in today's college game a program has a wide-open passing offense, there are many options for a wide receiver recruit.

I always look at "football fit" as one of many factors in determining whether a player will succeed at a certain school.

With the spread offense becoming increasingly en vogue, receivers are not being asked to run full route trees anymore. Instead, smokes, verticals, slants and bubbles are mainly what they run.

Yet, a lot of schools have their receivers put up huge numbers, which is enticing to a recruit. Other schools just pull out a list of former wide out stars and tell a recruit he could be next in line if he comes there.

Here are the 10 best schools for a receiver recruit to attend. 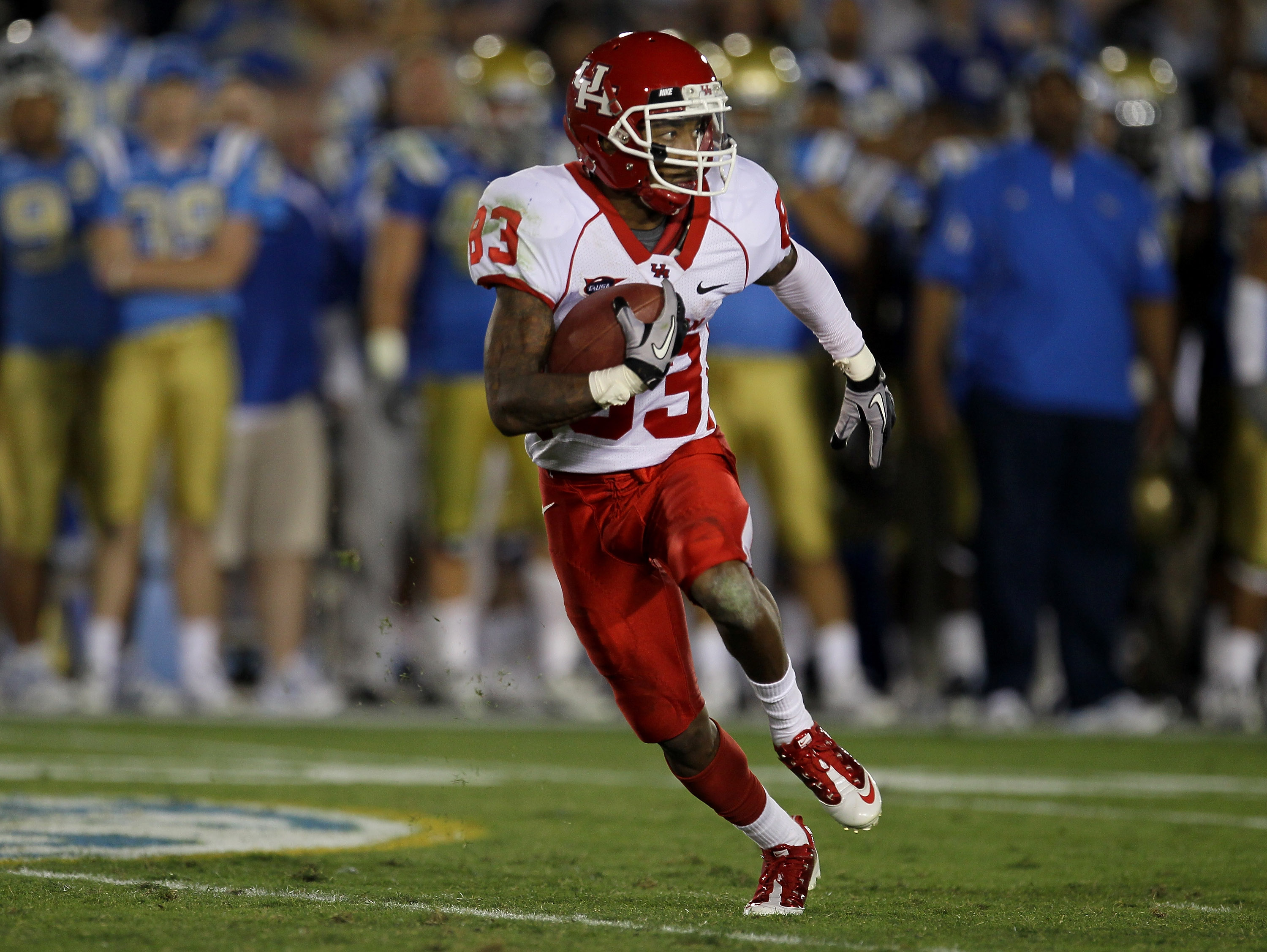 Houston has been tossing the pigskin around for years. They run a wide-open passing offense that is extremely QB-friendly and allows them to plug in a signal caller to toss for big numbers.

The Cougars value speed in the receiver corps and really like their pass catchers to be very athletic, quick and excellent in RAC situations.

They look for playmakers across their recruiting board and pluck talent in their own Houston-area backyard. 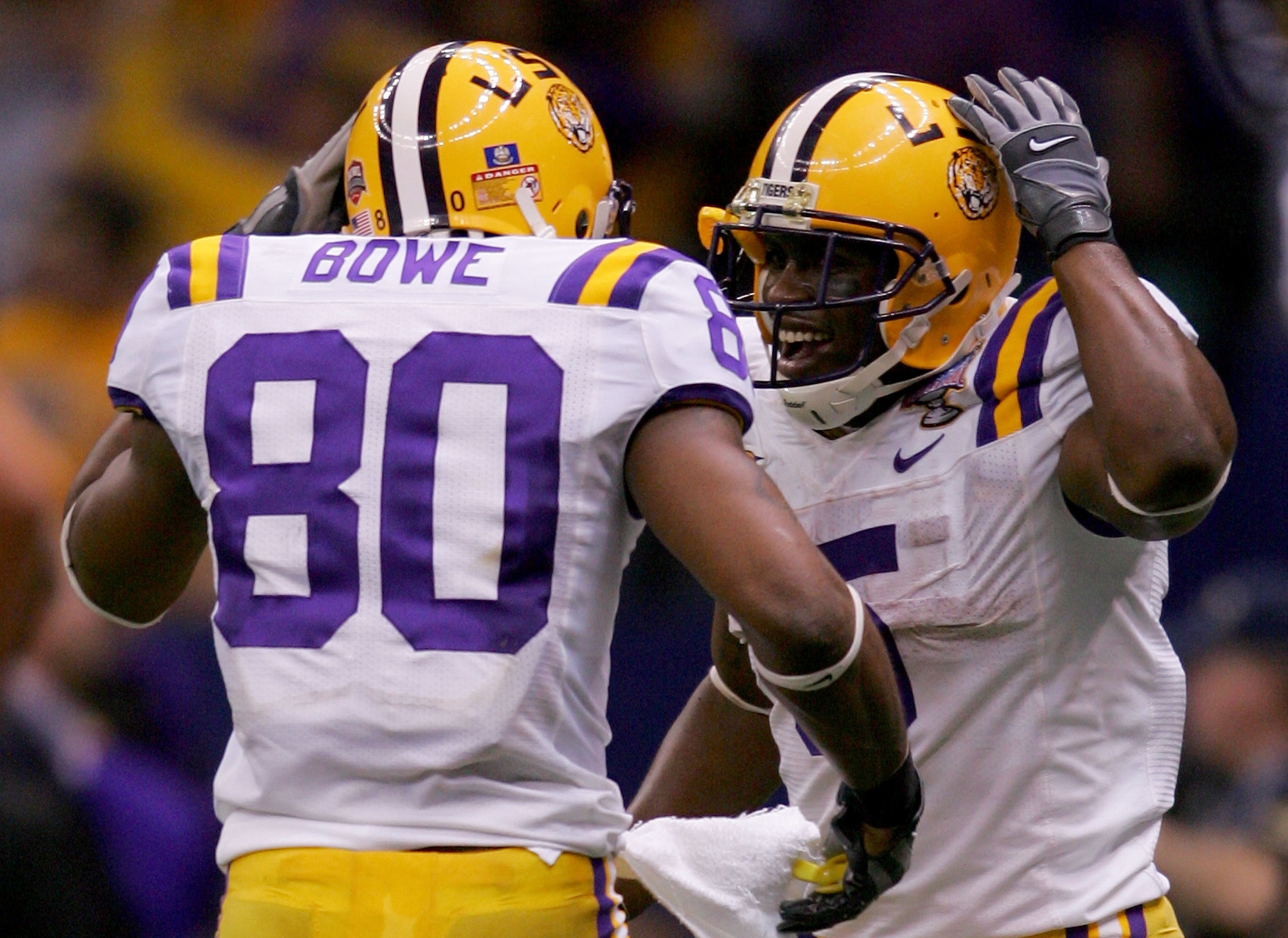 The line of receivers that has walked the campus in Baton Rouge is certainly impressive and still to this day, many receivers around the South give LSU a long and hard look when it comes getting a receiver to the NFL.

Next in line in the Bayou seem to be players like Russell Shepard, Rueben Randle, Odell Beckham and Jarvis Landry. 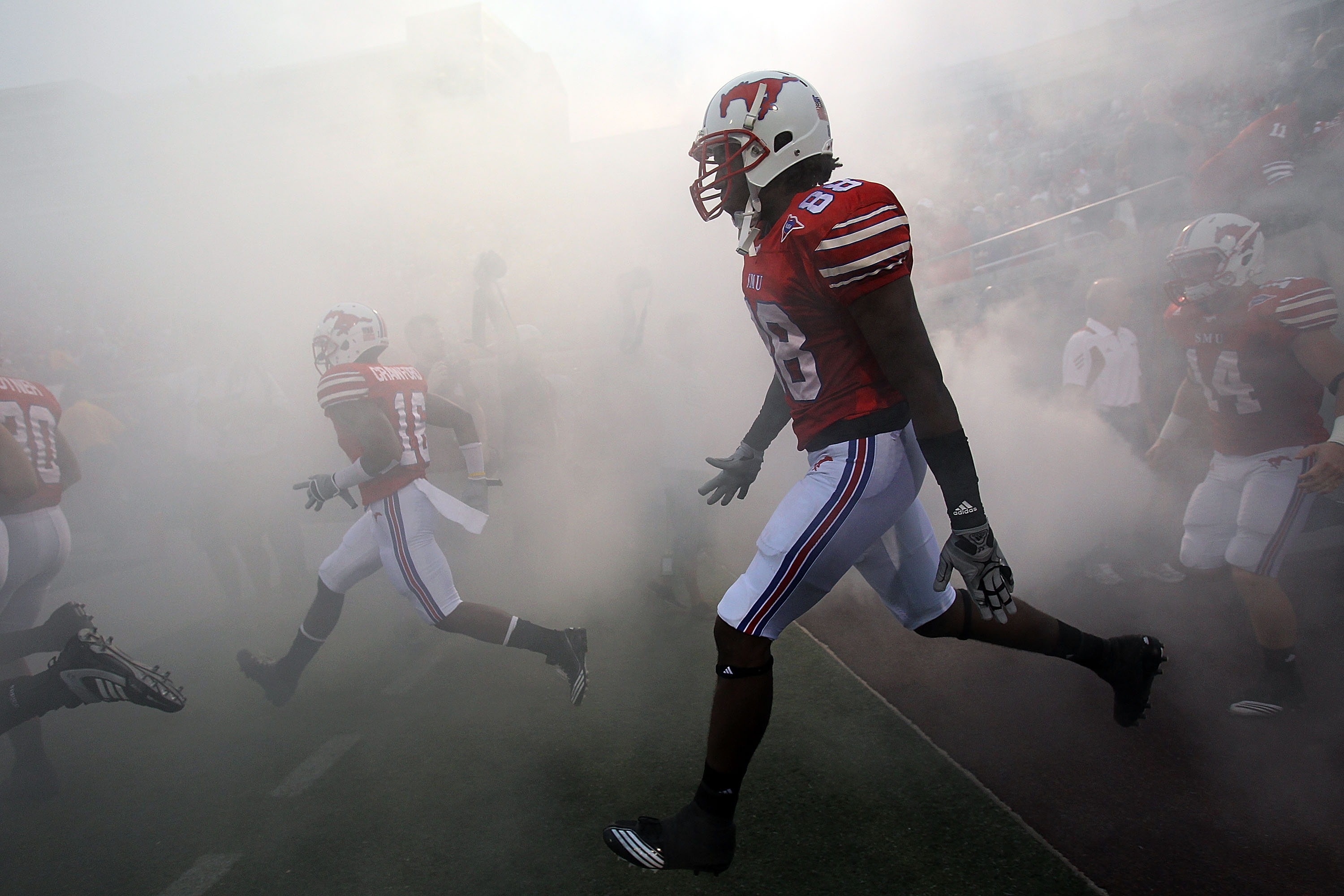 SMU has a rich football history, dating back to their domination in the '80s. Say what you want about how they recruited, but the Mustangs won on the field.

After getting the death penalty and basically fading into oblivion for years, the alumni decided to resurrect the program and lured June Jones to become coach of the team. Jones is the reason why the Mustangs are on this list.

He still runs the ol' Run 'N' Shoot offense that he ran with Jeff George with the Falcons in the 90s and used it to score points in Hawaii.

Jones has proven to be able to turn any receiver into an uber-productive cog in his offensive machine. If you are a receiver recruit and you wish to catch a ton of balls, SMU should be on your list. 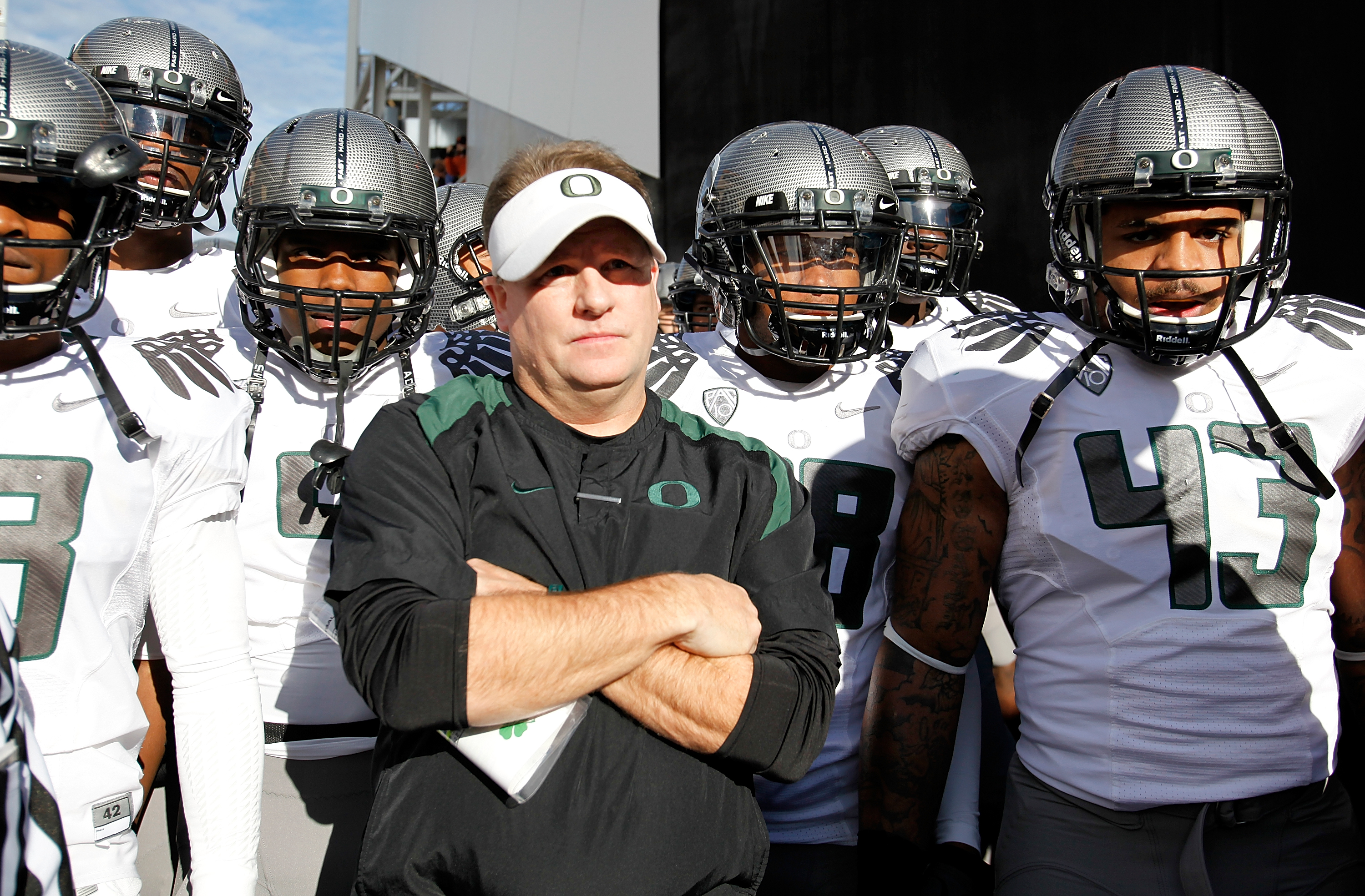 Oregon's offense is perfect for a receiver. It's called fast break football on grass and it is very simple to grasp.

Chip Kelly relies on his offensive unit perfecting a small number of plays and on game day, their execution will outweigh scheming.

The Ducks always deploy pass catchers in defensive voids and coverage windows, use play action or their zone-read runs to draw up linebackers, and value speed on the trail.

RAC-type receivers are great for this offense as Kelly finds ways to get them the ball on smokes, bubbles and reverses.

Oregon also will use speed on the perimeter to take a shot deep down the field every so often as well.

While there isn't a high number of Duck receivers tearing it up in the NFL, bet that mantra will change in the near future.

Notre Dame has a solid balance on this list in the perspective of tradition of receivers and relevance in today's college football scene.

Kelly is a great schemer, values a high tempo and always looks to put his receivers in position to exploit matchups.

Michael Floyd has a chance to go down as an all-time great, and he should be a first round pick the 2012 NFL Draft. 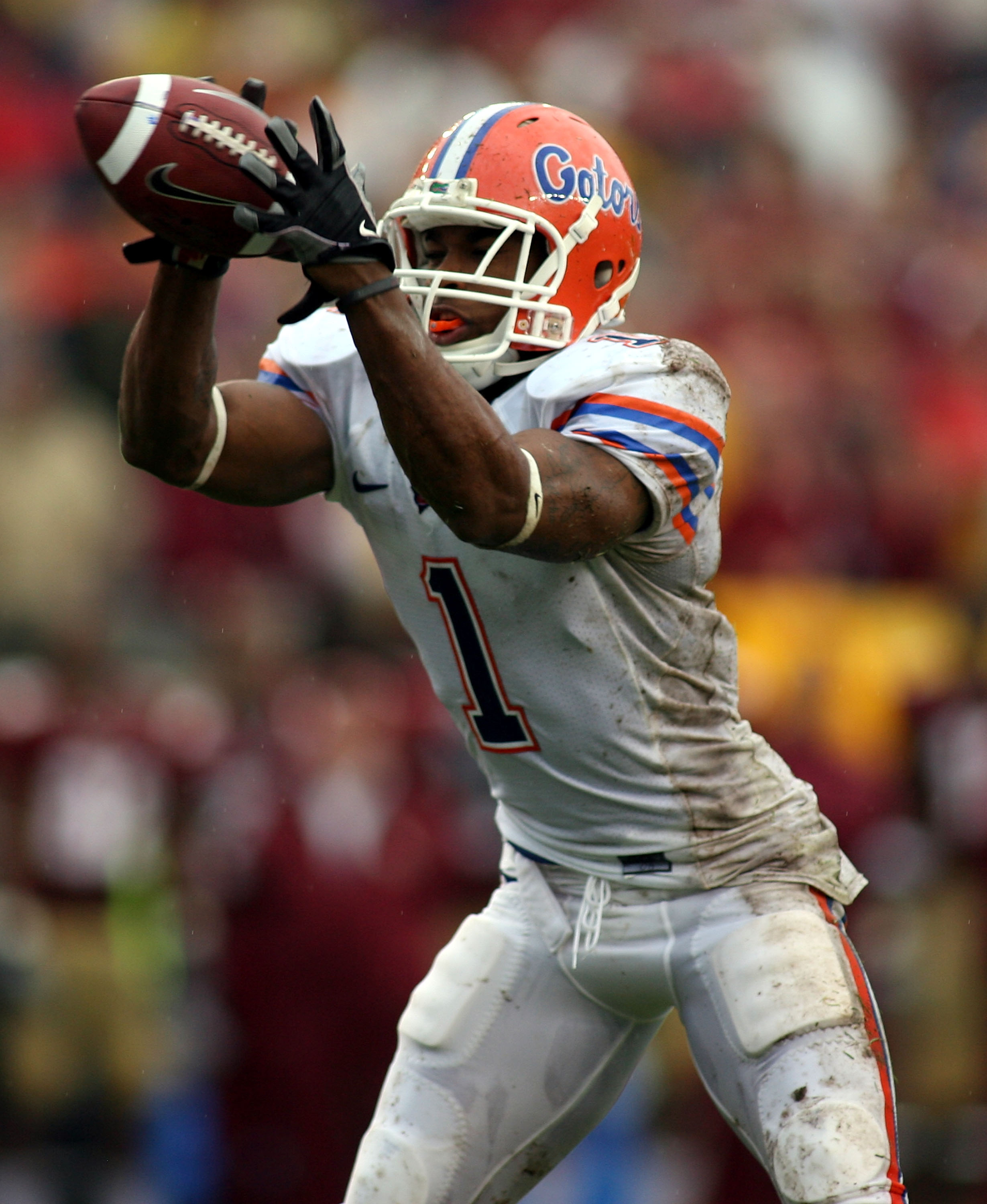 Florida is similar to Notre Dame in tradition at the receiver spot and relevance today. Steve Spurrier's Fun 'N' Gun offense led a marvelous passing attack through the 90s that was home to Reidel Anthony and Ike Hilliard.

Urban Meyer came in and just recruited the heck out of the position with Bubba Caldwell, Percy Harvin, Carl Moore, and Louis Murphy, to name a few.

Meyer valued RAC-type receivers who he could get the ball in space to and let their speed and athleticism take over. There was no better fit than Harvin, who was used as receiver and runner.

Now enter Will Muschamp, who hired Charlie Weis as his OC. Weis is a great offensive mind, and this will attract an array of receivers to Gainesville. 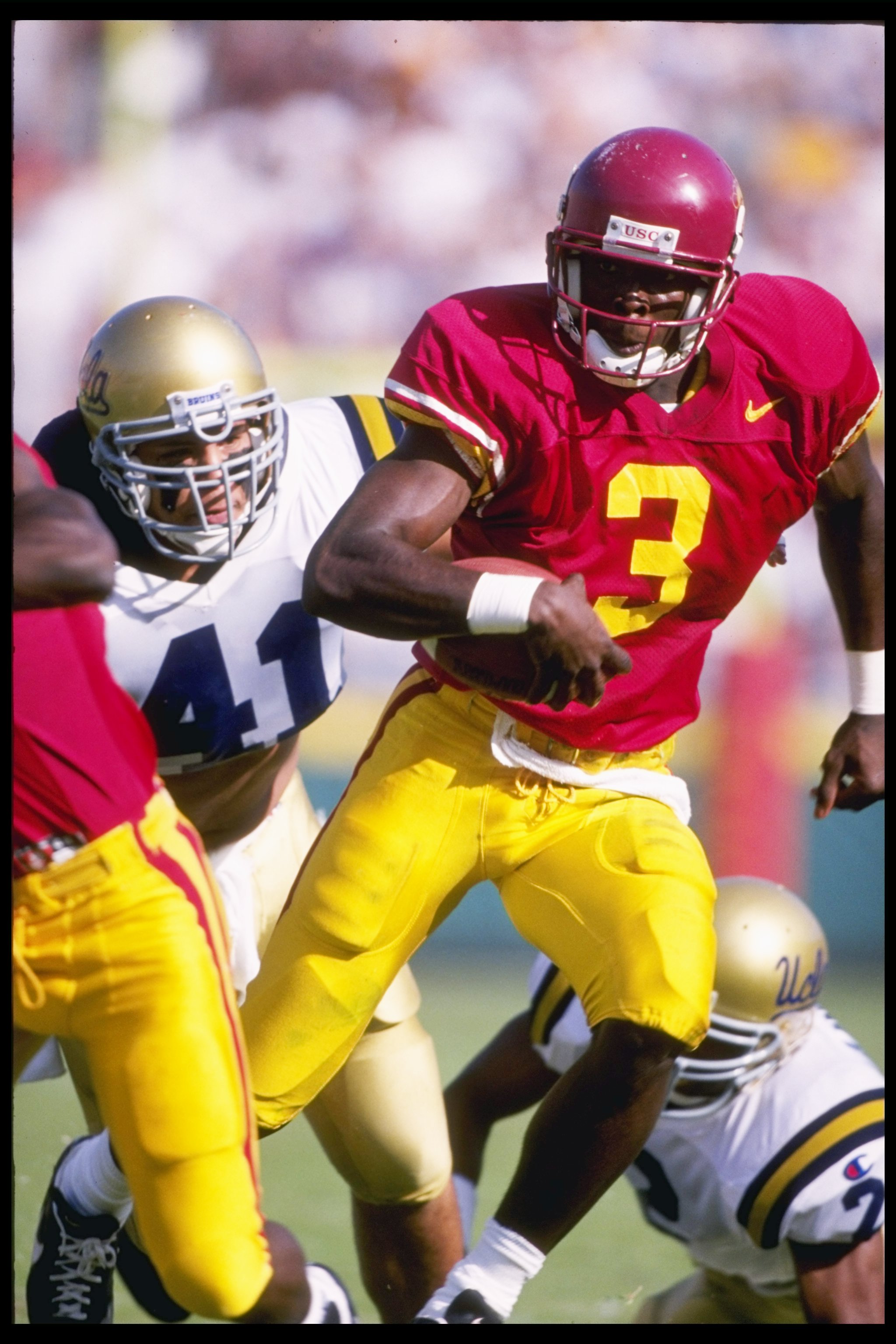 The Trojans have been called Running Back U by all-time observers but their receiver tradition is right on par. Johnnie Morton, JK McKay, Keyshawn Johnson, R. Jay Soward, Mike Williams, Dwayne Jarrett and Steve Smith are some of the best college football receivers ever.

Then you look at the Trojans' current receiver depth chart and are amazed. Robert Woods is a freshman All-American, Kyle Prater is a 6'5" stud, Markeith Ambles was all-everything in high school, Brandon Carswell is solid, Brice Butler is poised for a breakout season and Devon Flournoy has dazzled in practice.

Throw in George Farmer, the top 2011 incoming receiver and Victor Blackwell, and you have a stable of pass catchers that Lane Kiffin has at his disposal.

Now he just needs to find a receivers coach. 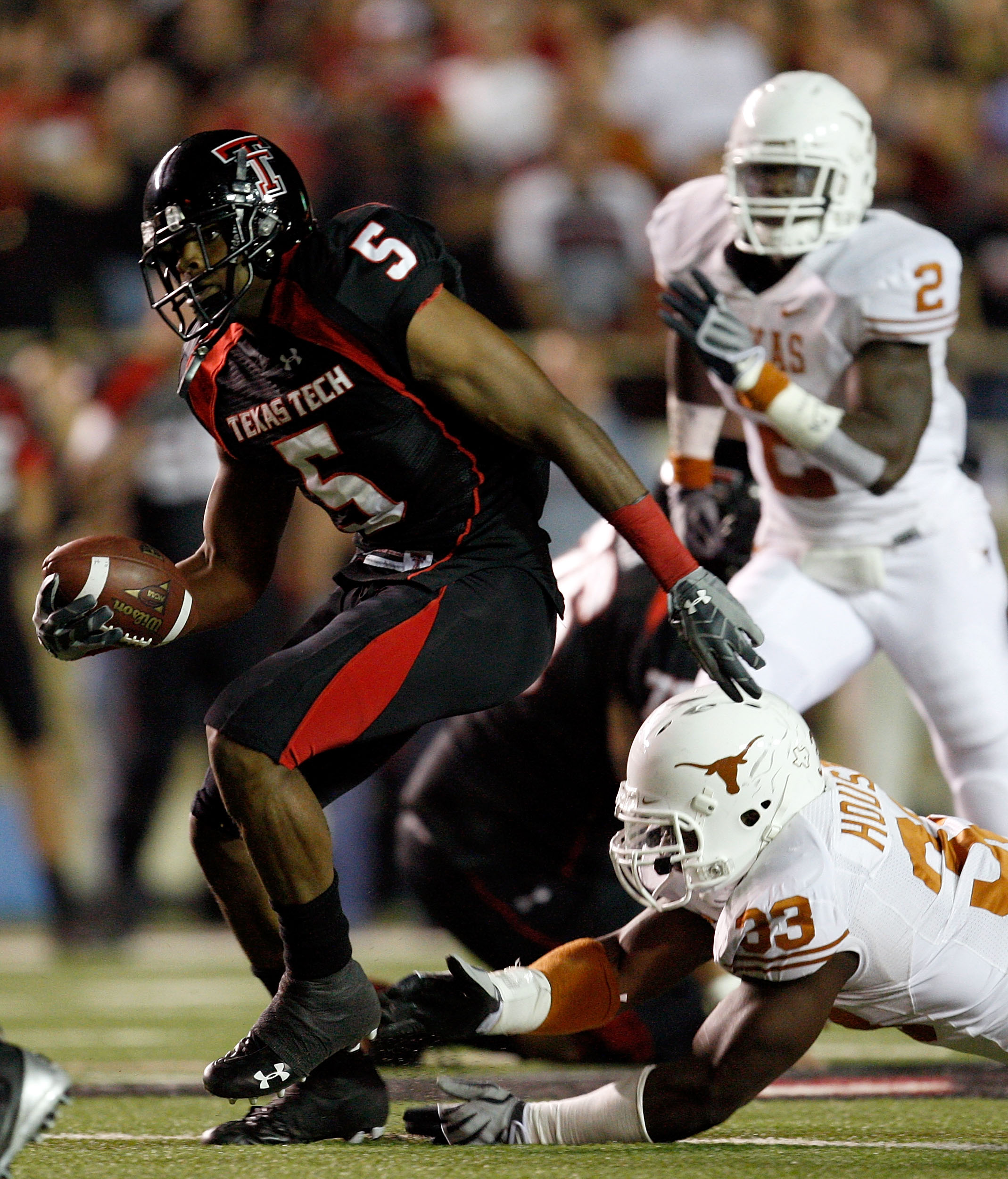 Legend has it that when Mike Leach was recruiting Roy Williams from Odessa to Texas Tech, he told the young receiver "You'll catch 150 passes a year if you come here."

Obviously, Williams went on to star at Texas, but it was feasible that Leach was actually telling the truth.

No, the Red Raiders do not have a stout tradition at the position, but whoever they throw on the field, those receivers catch an array of passes. Tommy Tuberville wisely did not change the offense much when he was hired in Lubbock, and the trend has continued.

Michael Crabtree is easily the greatest receiver in school history, and was the real deal.  Texas Tech is on this list at this position due to their overall offensive production history.

If you're an under the radar type of recruit and the Red Raiders come calling for you to play receiver, your eyebrows raise, as you know you'll definitely put up some crazy stats. 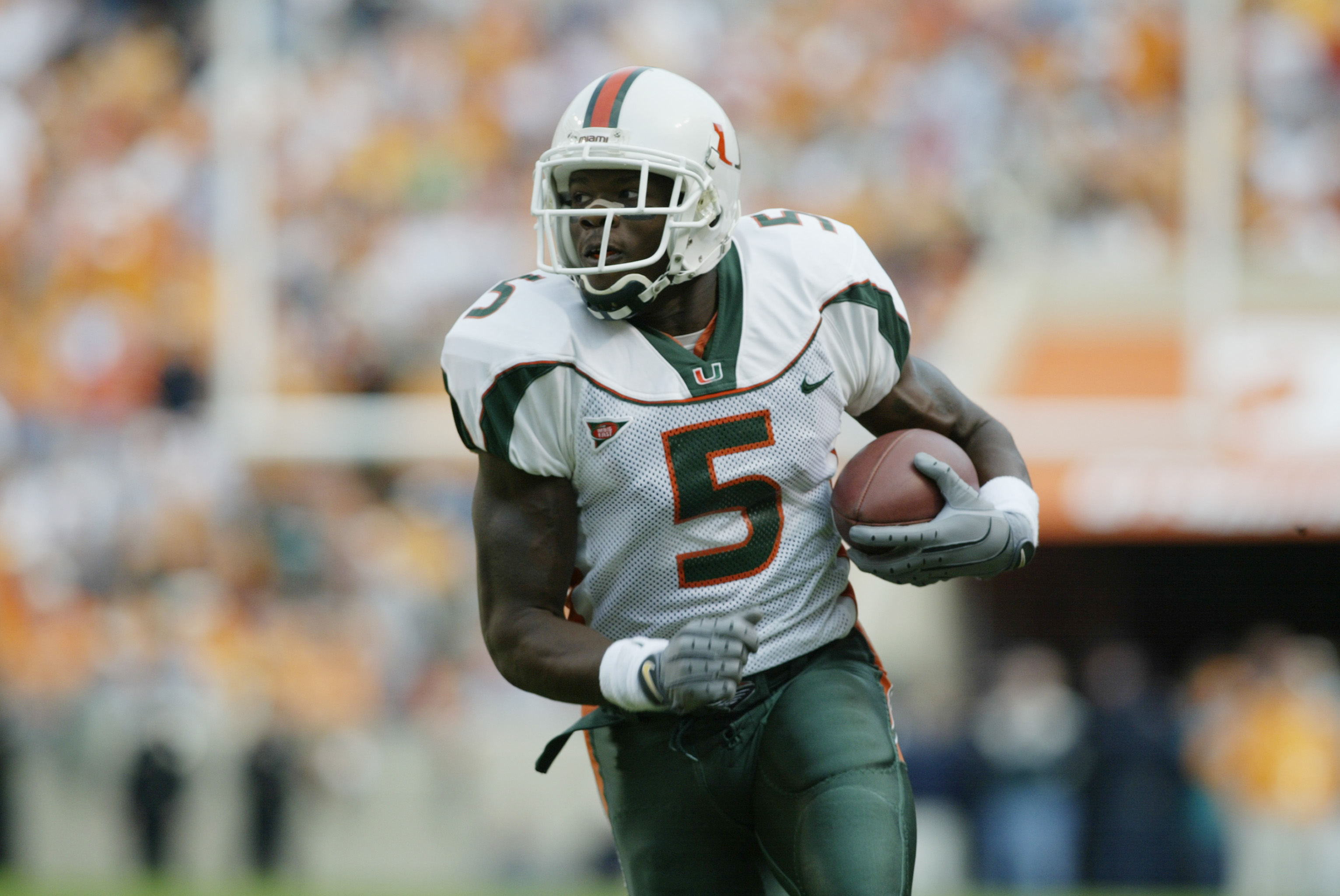 The U has seen some of the very best overall collection of talent through its history, and the receiver position has been key.

While Miami hasn't been "Miami" per se in the past few years, their talent level through the years has been serious. New coach Al Golden has hired Jed Fisch from the NFL, who is known as a great developer of talent.

Receiver recruits who want to go to school in South Florida, at a NFL-producing school and play for a NFL-style offensive coordinator will be looking long and hard at Miami again. 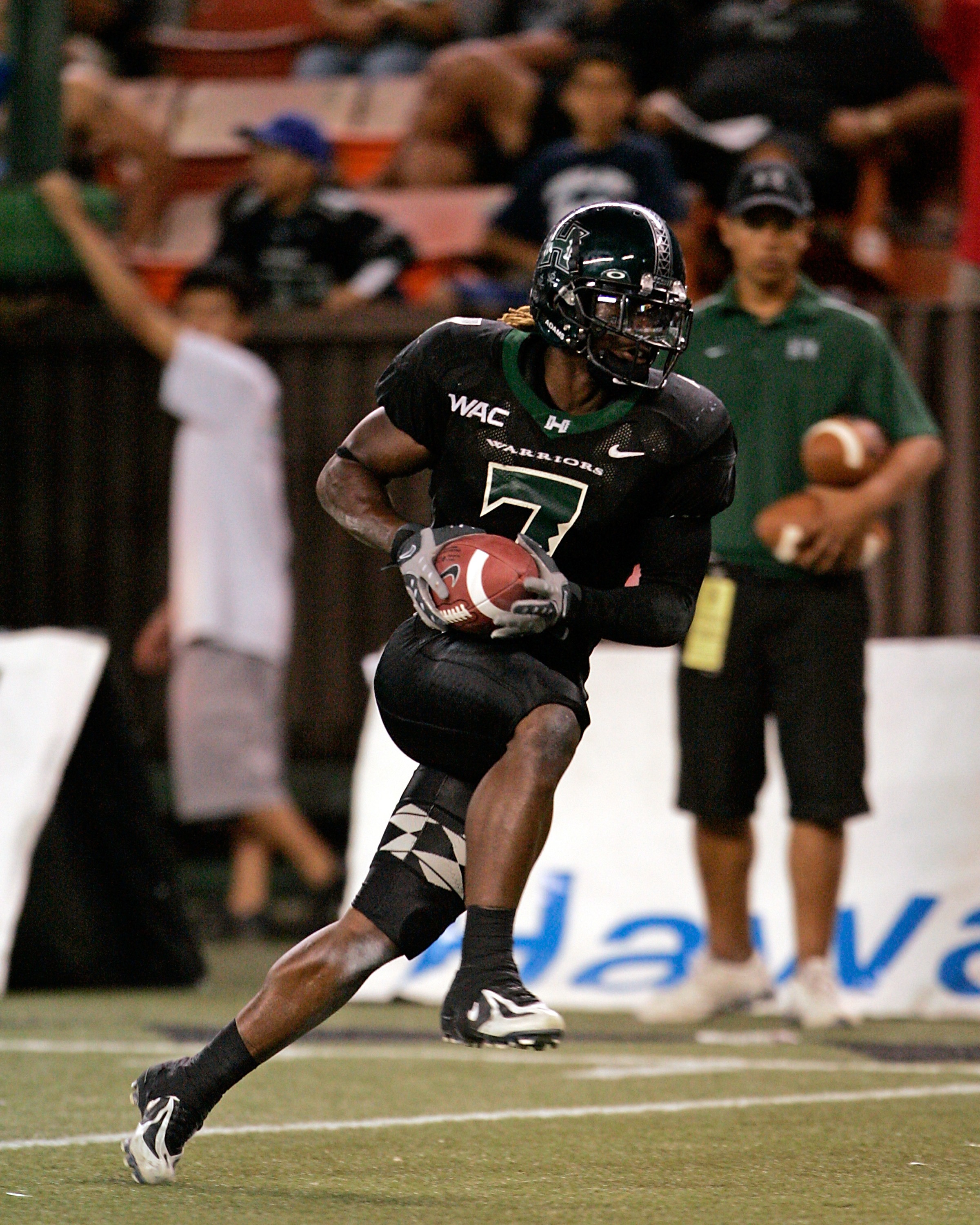 I know, I know...Hawaii? Yes, Hawaii. They throw the ball almost every down, have done nothing to move away from June Jones' passing offense and come on, it's Hawaii.

If I'm a receiver and I want the combo of the chance to catch a ton of passes while going to school on a nicely located campus, Hawaii is a serious option.

The Warriors have had some of the most productive QBs and offenses of all time, and it always seems their receivers do better in the NFL than people think, except for Ashley Lelie.

Davone Bess is a stalwart with the Dolphins who went undrafted, and Greg Salas will be a mid-round steal in this year's NFL Draft.

Catch a couple passes, get a good education, good weather, scenery. It's like playing football on vacation, or is it?