The 20 Most Interesting Ballpark Quirks in MLB History

Did you know that Major League Baseball is the only sport where the ground rules are different from venue to venue?  Because of this strange stipulation, each ballpark has its own unique feature, dimensions and quirks.

Here is a list of the 20 most interesting quirks in MLB history:

Back in the old Milwaukee County Stadium, Bernie Brewer would go down a long slide into a “mug of beer” every time the Brewers hit a home run.  The slide became popular with fans, and a mainstay at Brewer games to this day.

When Miller Park opened in 2001, the Brewers brought the slide back, but suppressed the beer image for the splash zone.  The slide is still interesting, and adds to the atmosphere and nostalgia of seeing a Milwaukee Brewer game. 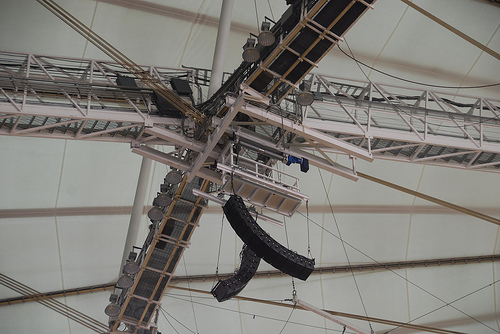 While the catwalks are necessary to support the Trop’s dome, they are a nuisance, and are one of the main frustrations with an overall nice stadium, and add to the confusion of a ballgame played there. 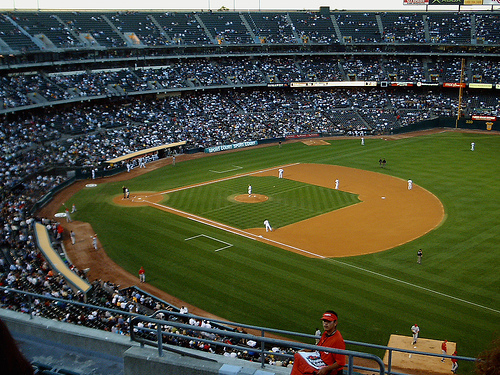 No stadium in baseball has more foul territory than the Oakland Coliseum.  In fact, statisticians believe that the large amount of foul territory takes five to 10 points off of every batter’s batting average.

A big reason the A’s usually build their team around pitching is the foul territory.  A big spacious field like Oakland’s and most of the West Coast teams allow for a more cost-effective mediocre team, something the A’s have been for last the five years.

Over the course of the Metrodome’s lifespan, fielders lost hundreds of balls in the white ceiling that blended in perfectly with a baseball.  The white ceiling was a bit of an advantage to the Twins, but the Twins themselves were prone to losing the ball to the ceiling.

Of all the things the Metrodome will be remembered for, perhaps that annoying white ceiling will be what most ballplayers and fans recall.

Once upon a time, Shea Stadium was the crown jewel of new baseball stadiums, and one of its best feature was the Big Apple (no pun intended) that popped up every time a Met hit a home run.

In later years, the Apple didn’t work as well, and was replaced with a new version at CitiField, but Met fans always loved to look at that Apple every time the Mets blasted a huge home run.

Pool In the Stands: Chase Field 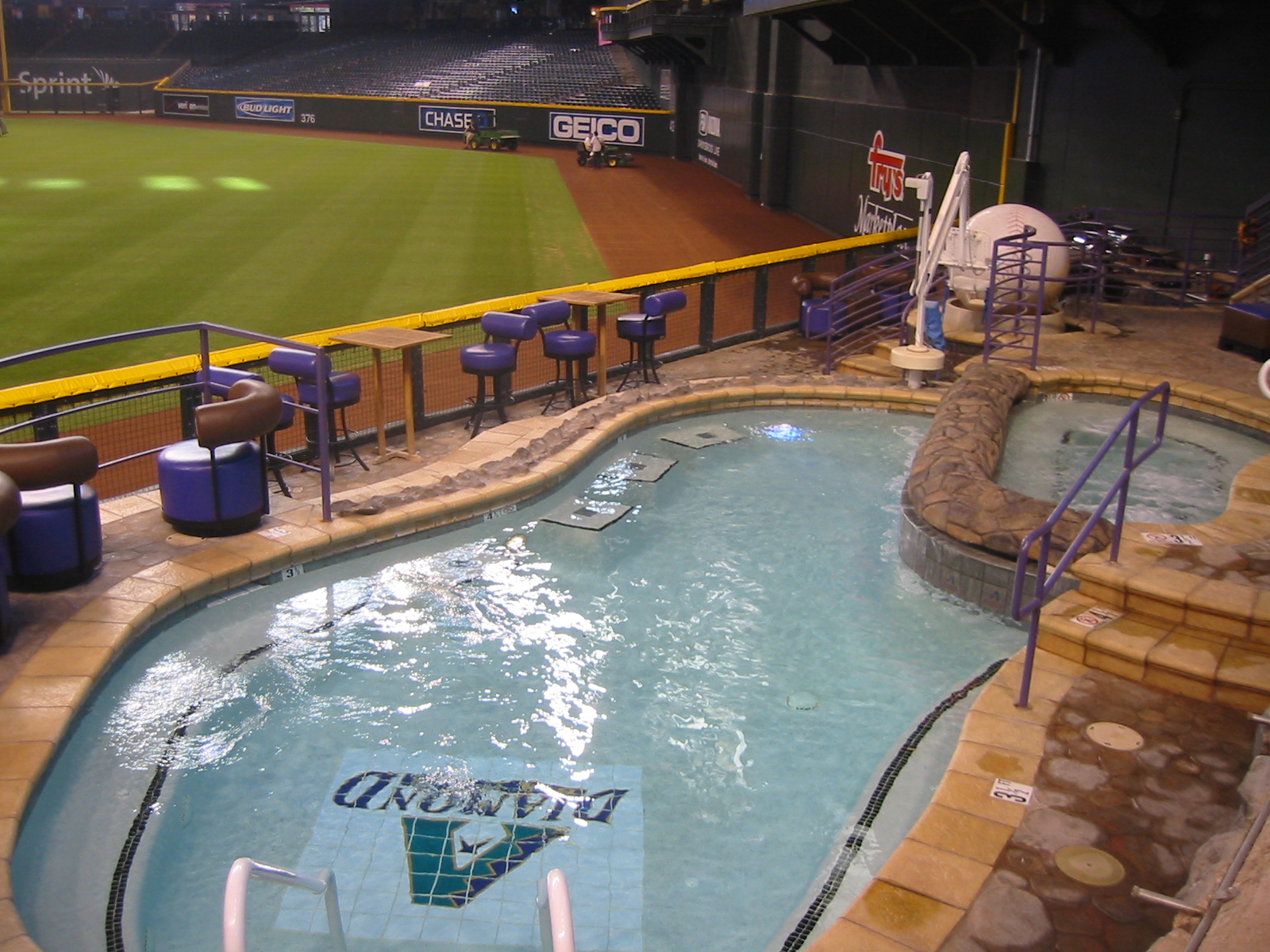 Whenever I play an MLB video game, I love playing at Chase Field, where I always try to hit a home run into the pool.  No other stadium in baseball has a pool for fans to take a swim during games.

While the Diamondbacks may be inconsistent, their stadium is cool, and taking a dip is a great way to cool off in the desert…

Hill in the Outfield at Minutemaid 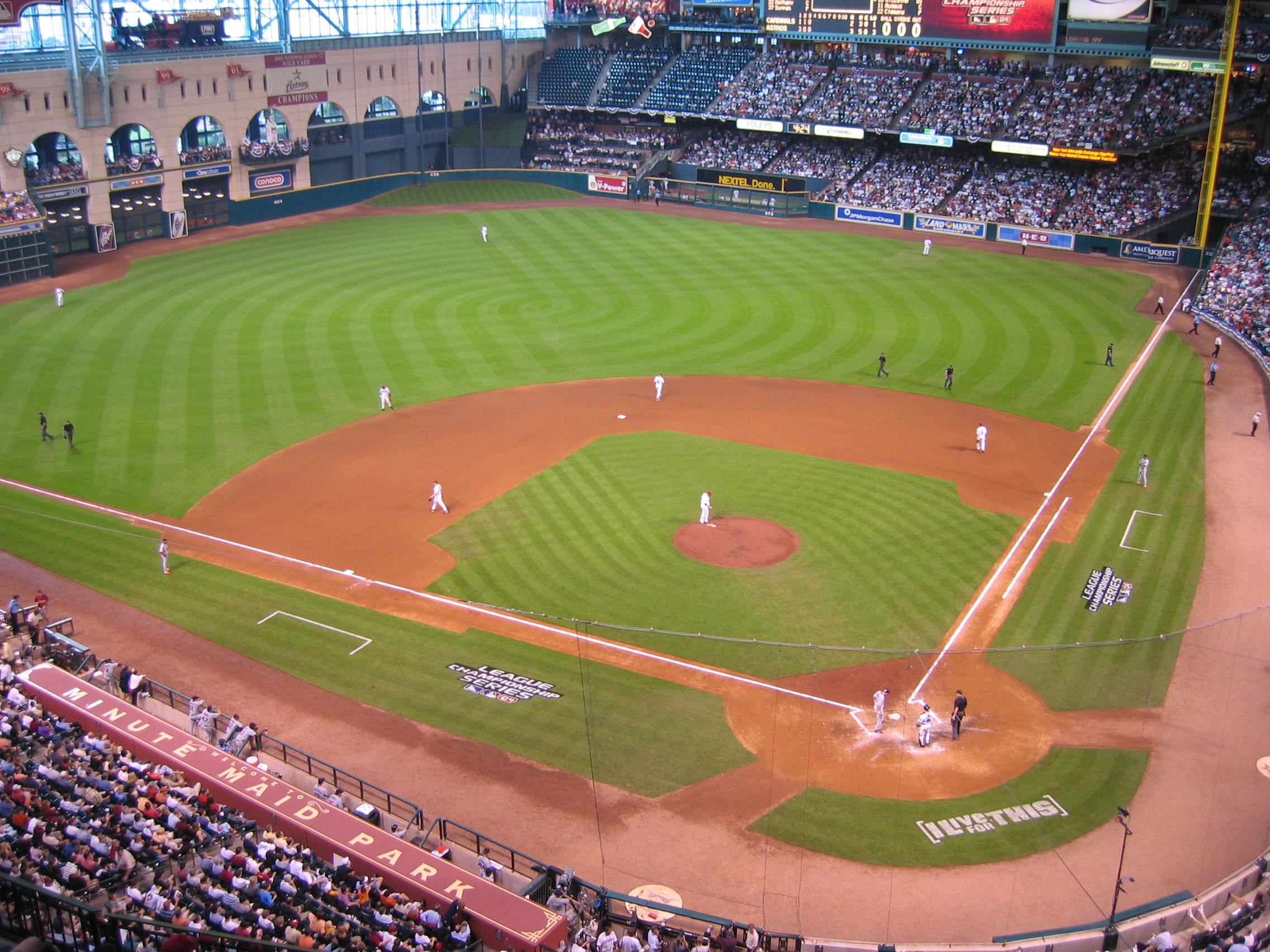 For some strange reason, there is a random hill on the centerfield warning track at Minute Maid Park.  While it has helped centerfielders bring a few balls back into the park, it has served as a weird ballpark feature, and a bit of a nuisance to visiting players. 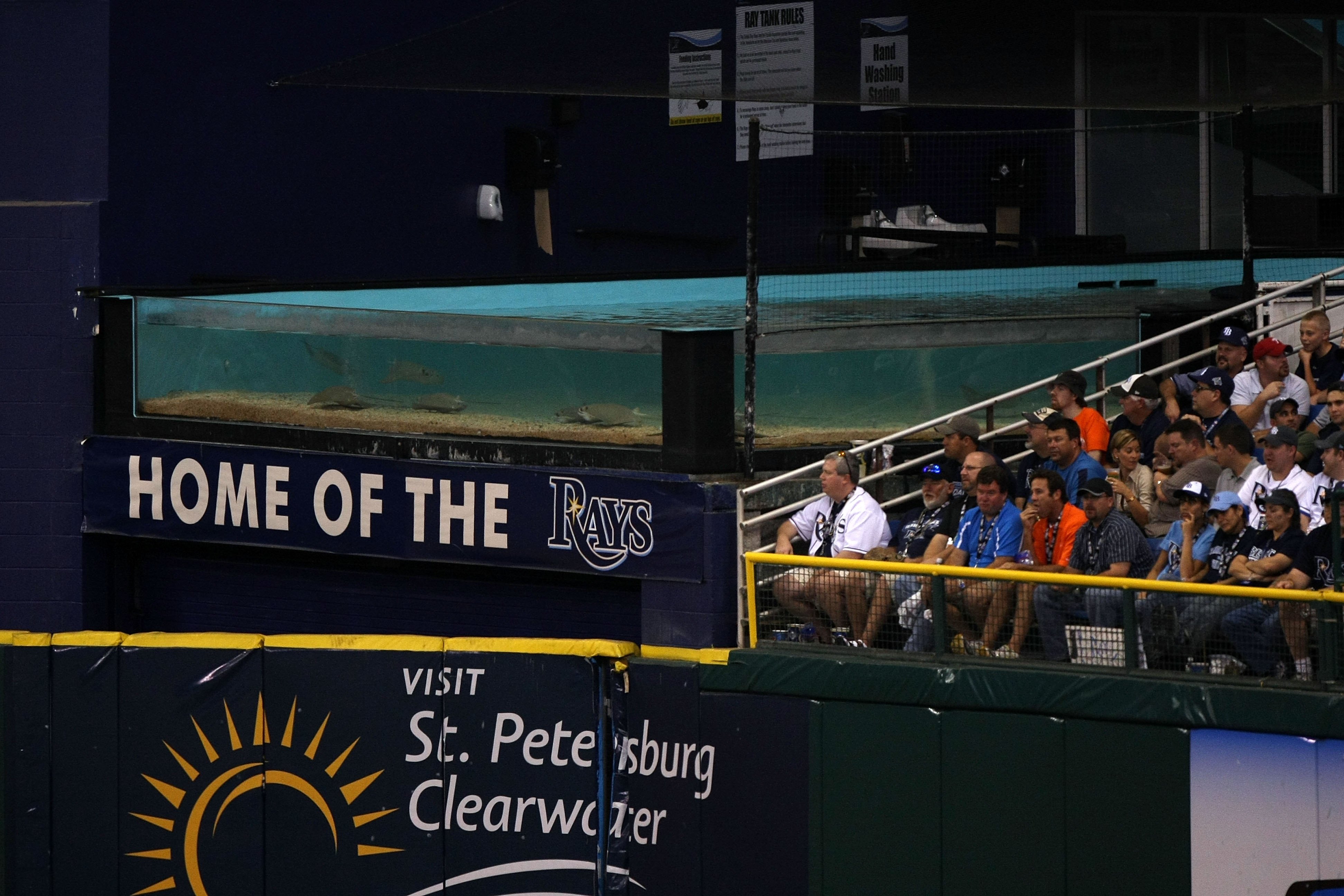 The Rays have a fish tank filled with Cownose Rays that fans can observe and feed during games.  All the proceeds from the feedings go to charities, as well as donations for any home run hit into the tank.  Combining aquatic life and baseball may be strange, but in this case, it makes for an interesting experience.

When Coors Field opened, it became known as the best hitter’s park in baseball.  So much so, that team ERAs ballooned every time they played in Denver.   Eventually, the Rockies installed a humidor room, which houses the baseballs the Rockies use during their games.

This humidor alters the balls to make them not travel as far, which as of today has been a resounding success.  Now, Coors is one of the more neutral parks in baseball, and even housed a Cy Young contender last season in Ubaldo Jiminez. 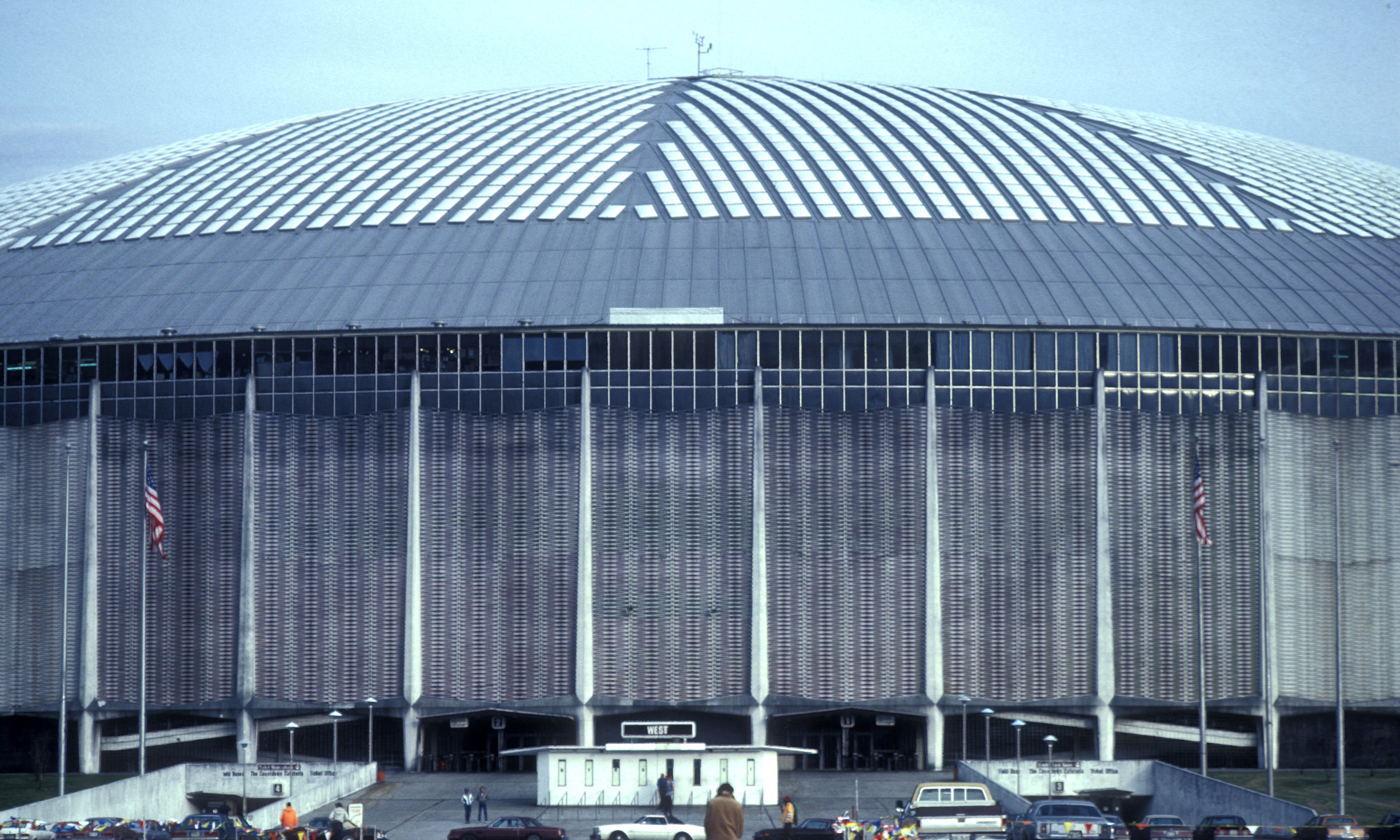 Without the Astrodome domes might not have existed...A. Messerschmidt/Getty Images

The Astrodome was a key ballpark in the annals of baseball for many reasons, most notably, its dome.  The Astrodome is the world’s first domed stadium, which allowed the Astros to disregard the elements of heat, cold and rain.

Without the Astrodome, teams in cities of extreme climate would be severely hampered in all sports.

AstroTurf in the Astrodome 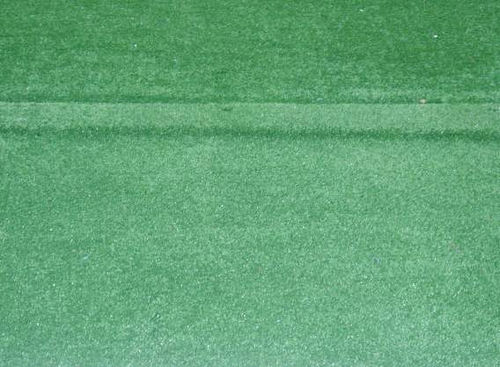 AstroTurf at its finest...

Another important quirk of the Astrodome was AstroTurf.  AstroTurf allowed sports to be played in any environment because it didn’t need grass.

While not needing grass was a major convenience, the surface itself was incredibly hard, speeding up baseballs, increasing the size of their bounce on the turf and ravaging ballplayers' legs for decades until FieldTurf was invented.

Still, the AstroTurf in the Astrodome was an important precursor to modern sports, and certainly was unique for its time. 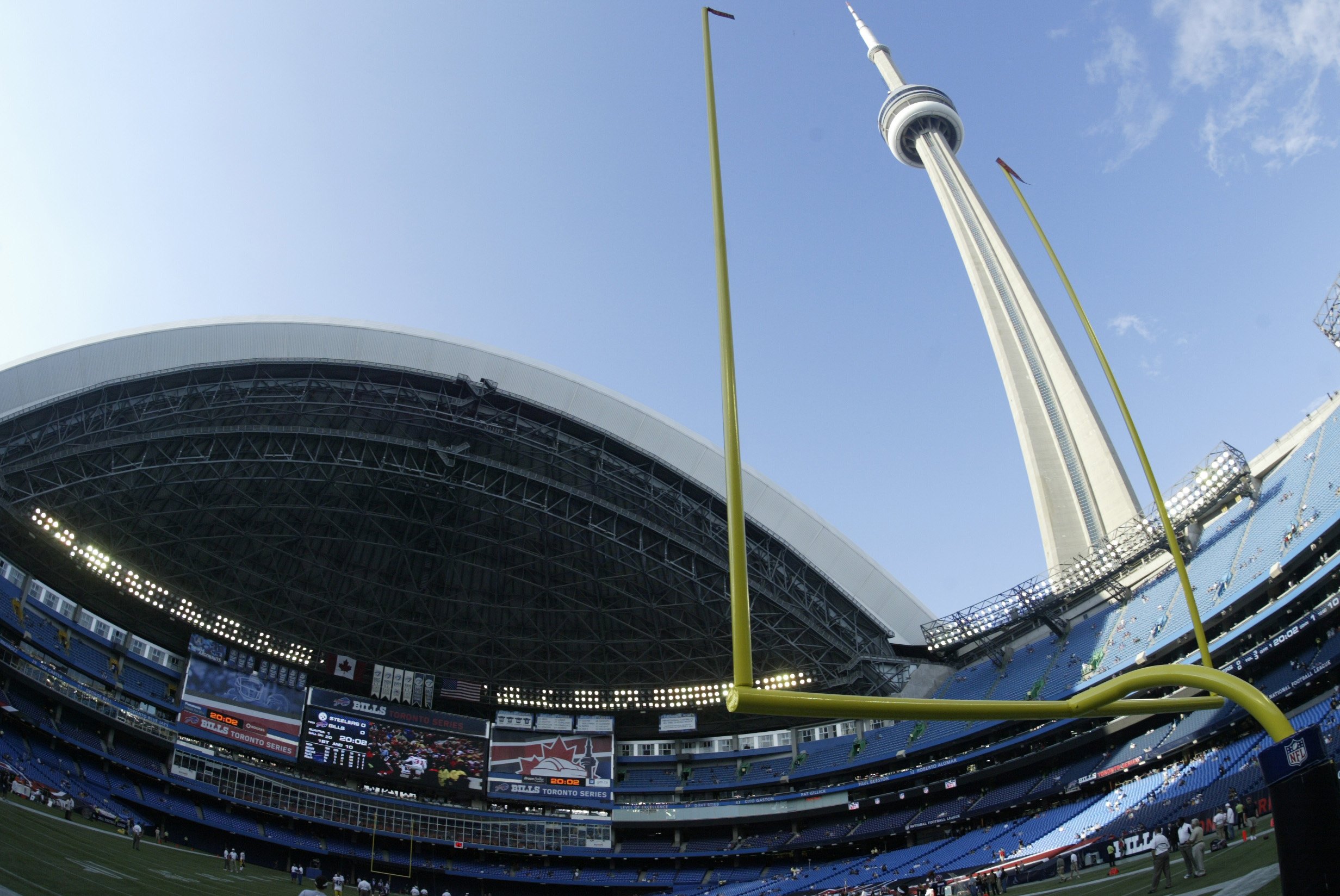 Twenty years ago, Skydome was cutting edge with baseball’s first retractable roof.  The retractable roof allowed the Blue Jays to play every home game without fear of a rain out or the cold Canadian winters.

While the retractable roof is a common feature in most stadiums these days, we all should pause in reverence to the first in the trailblazing line of weather-conquering stadiums.

Short Porch In Right at All Yankee Stadiums

Any lefty can hit a home run at Yankee Stadium.  Just 318 feet down the right field line, all you have to do is get around on a fastball. The short porch in right was built for Babe Ruth, who took advantage of the house he built to become baseball’s most iconic player.

Dead Centerfield at the Polo Grounds

483 feet to dead centerfield.  It was conquered by few in about 80 years of play, and was the quintessential old-school ballpark that allowed few home runs to anywhere but down the lines.

The Polo Grounds was the setting and cause for one of the greatest plays in the history of baseball.  Here’s the Say Kid at his best.

At the old stadium, the Boss' monument would have been on the field.Pool/Getty Images

Everyone knows of the Monuments the Yankees give to their greatest legends.  What many young fans don’t know, is that the monuments used to be on the field.  In fact, the monuments were even in play, causing centerfielders to maneuver around the monuments on long fly balls. 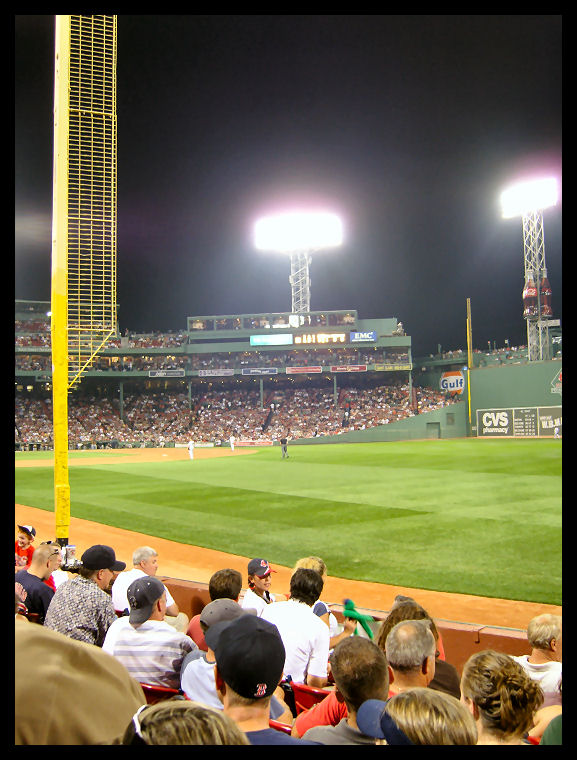 People may make fun of Yankee Stadium’s porch right field, but Pesky’s Pole is even shorter.  Named after Red Sox legend Johnny Pesky, who once hit a home run around the pole to win a big game.

Pesky was known as a slap hitter, and the pole in right thereafter became known as Pesky’s Pole.  Countless left-handed hitters have taken advantage of the Pesky Pole over the years because it is easy to pull the ball around the pole for a home run.

While the Green Monster may take center stage in Fenway, the pole in right adds a weird quirk to the weirdest ballpark in baseball. 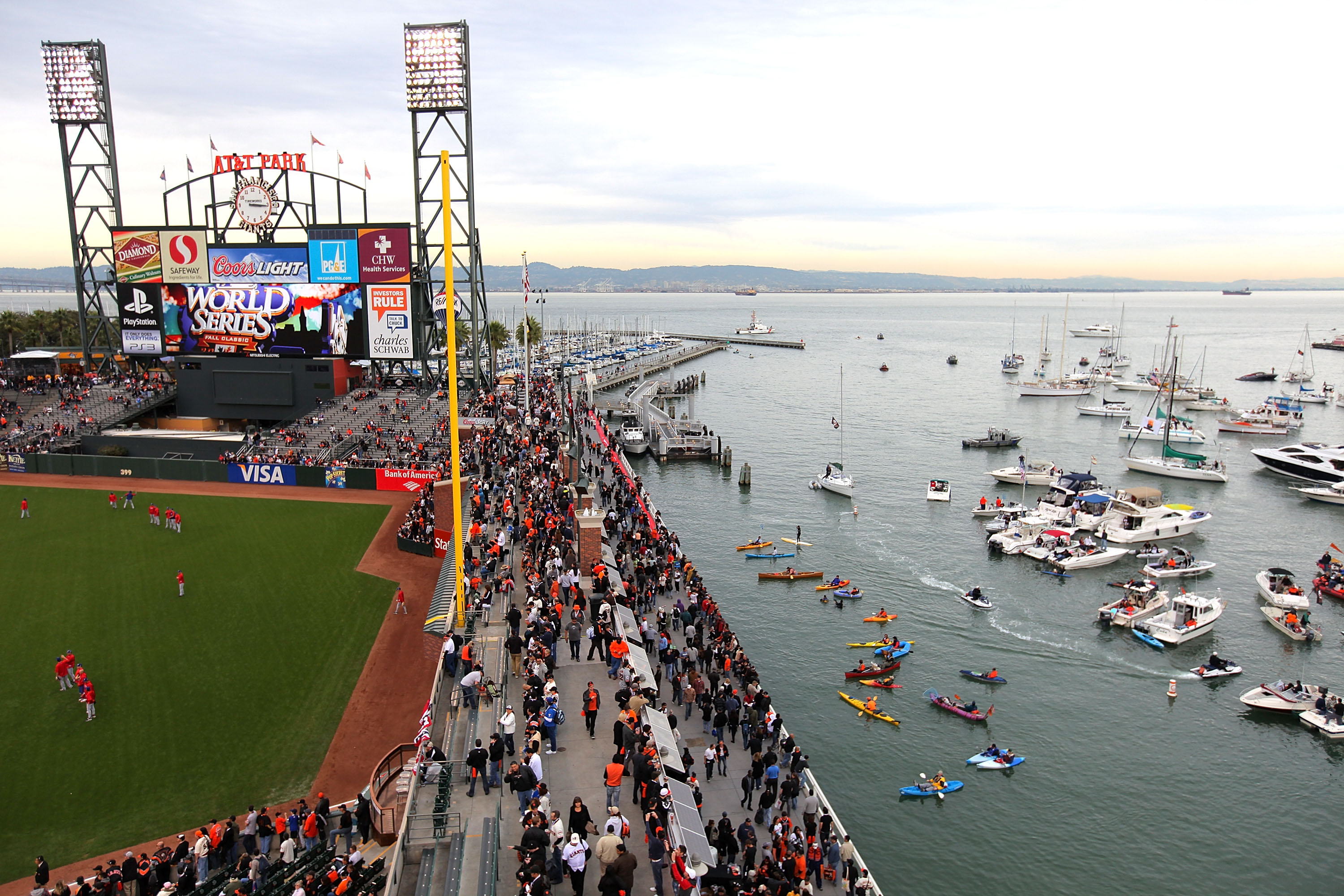 An awesome feature to look at AT&T Park is McCovey Cove, named after the Giants famous power hitter Willie McCovey.  Few things are cooler than seeing a baseball hit into a body of water, where baseball fans are known to park their boats during a game in hopes of catching a ball.

No other ballpark manages to use the natural aesthetic of water better than San Francisco’s, and it is a beautiful backdrop to the Giants’ home games. 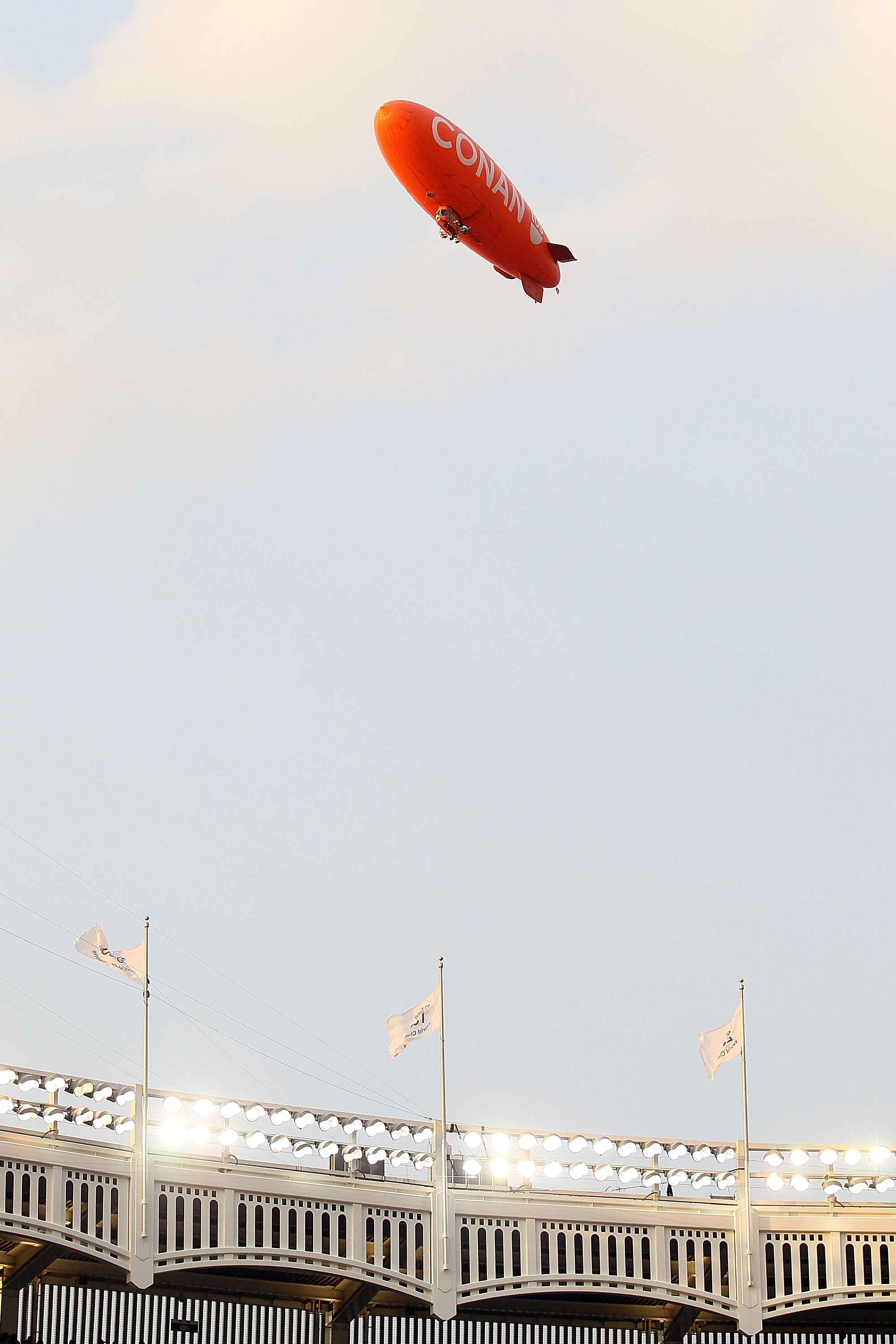 When you think of Yankee Stadium, you usually think of the iconic façade that was prevalent on top of the old stadium.  In fact, in the late 1950s-early 1960s, the copper façade turned green like the Statue of Liberty.

The façade was so famous, it was incorporated into the renovation of Yankee Stadium in 1974, and the new stadium in 2009.

Possibly sports’ most iconic stadium feature, the Green Monster has captured the imagination of sports fans for decades. The Monster has been the source of some of the Red Sox’s greatest triumphs and failures. 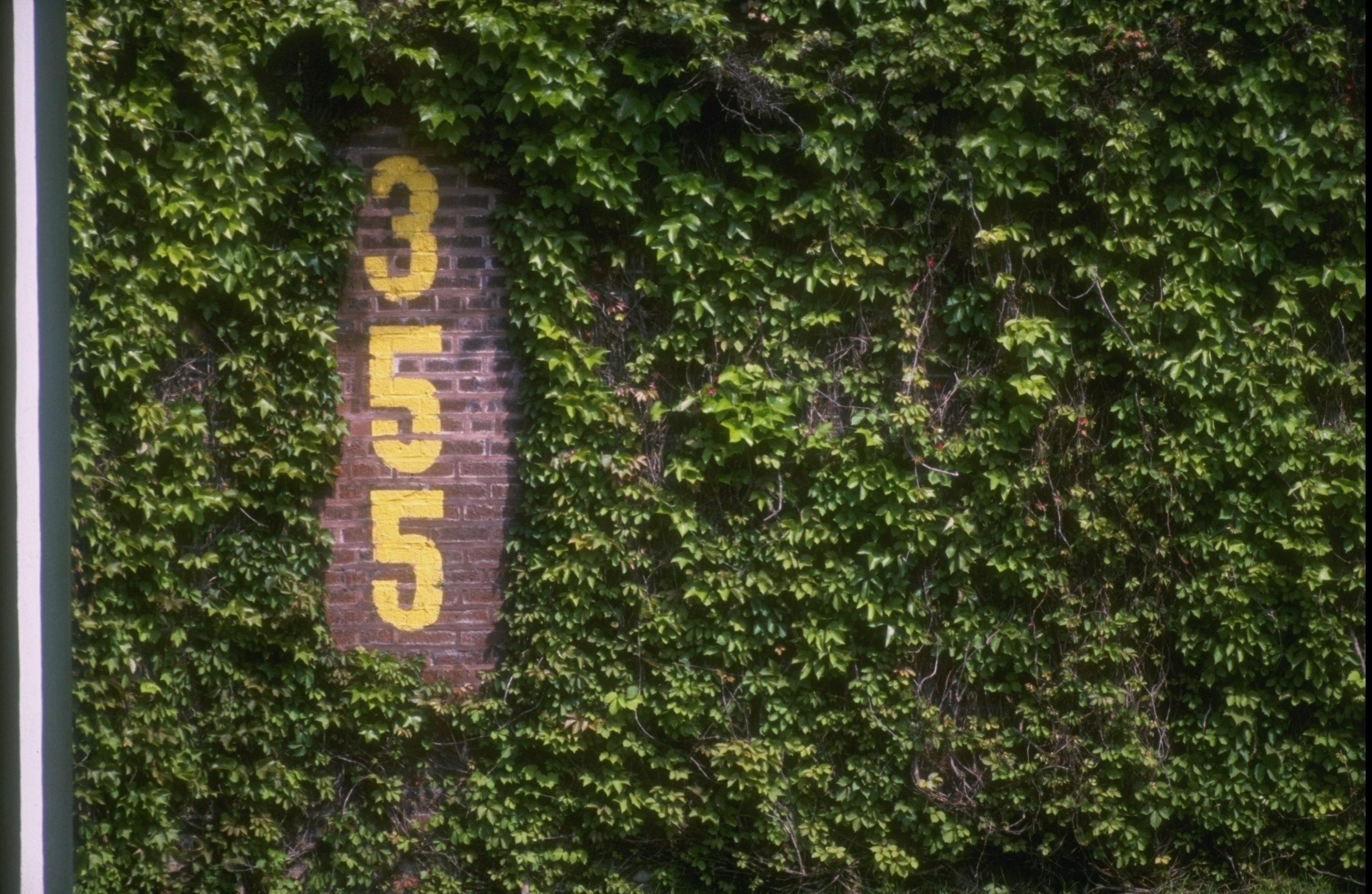 When people think of the Cubs, they think of two things:  The Lovable Losers, and the Ivy.  The Ivy covering the walls at Wrigley Field is iconic, and has its own ground rule:  Any ball caught in the Ivy is a ground rule double.

No matter what way you look at it, the Ivy is one of the best aesthetics in sports.  No list of the greatest quirks of ballparks is complete without the Ivy.