NFL: Osi Umenyiora and Other Masters of the Sack-Fumble 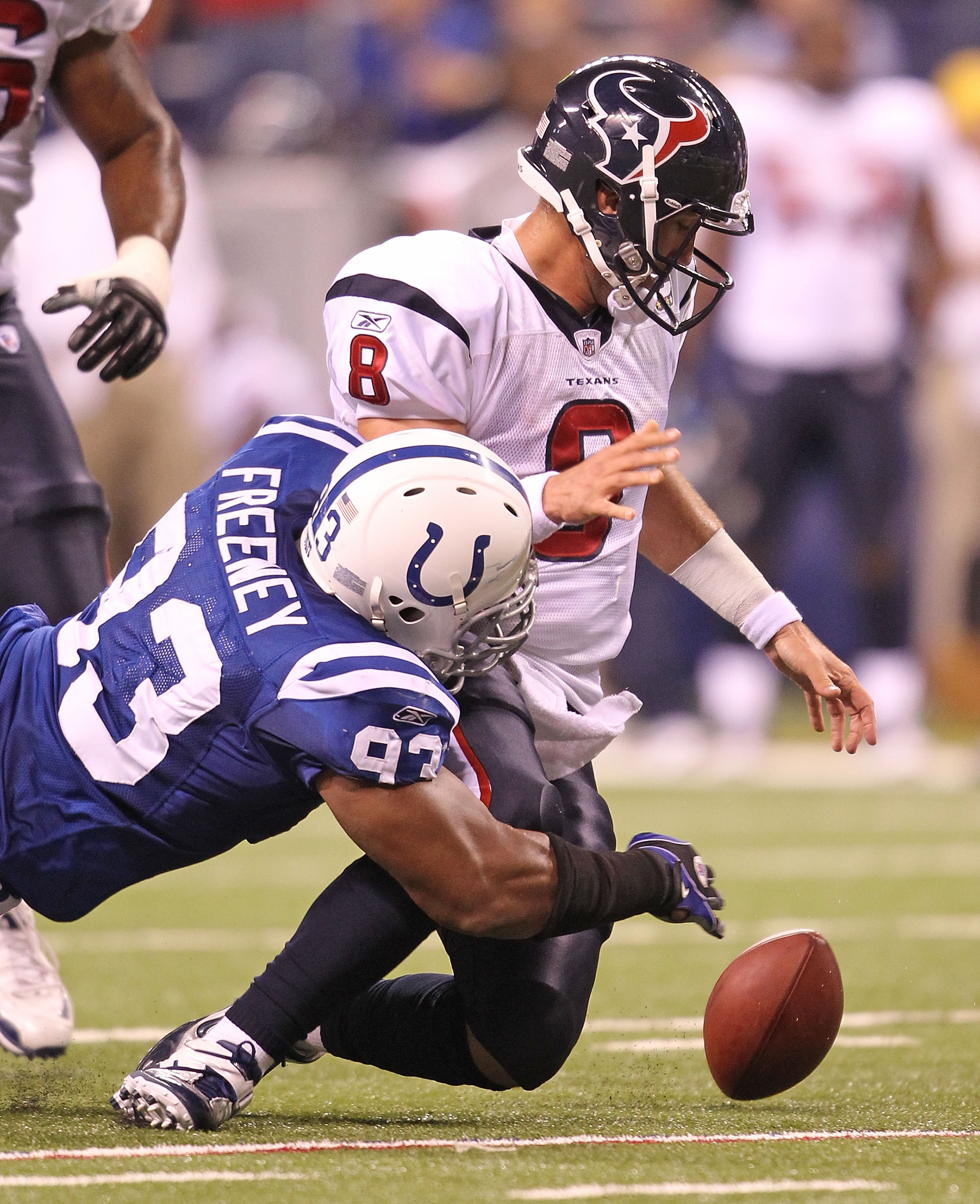 The Defensive End is truly a remarkable athlete.

A DE usually lies somewhere between a defensive tackle and a linebacker in terms of size, strength and speed.

Some DE's drop back in coverage once in a while, roaming like a LB. There are so many similarities in the skill sets between LB and DE that many 4-3 DE become 3-4 OLB, and vice-versa.

However, DE's are most famous for being the primary pass rushing threat. When the situation allows, they have to beat the blockers in their way and try to hit the quarterback in a matter of seconds. When DE are successful at doing this, they make the QB rush a throw that usually falls incomplete or gets intercepted.

They may also get sacks as a result of their hard work. And maybe a fumble on top of that. Even if the defense does not recover the fumble, it is a game-changing, momentum-shifting play and certainly a drive killer for the opposing offense.

There are sack artists, and then there are masters of the sack-fumble.

Here are the Top 5 guys that let us marvel at one of the most exciting plays in Football.

The most complete and talented defensive end in the NFL.

He is worth every penny the Bears signed him for, and he would probably have more sack-fumbles if he had more help in Carolina. Julius Peppers does his work despite the fact that blocking schemes primarily focus on him.

There's rarely a time when Peppers faces a blocker 1-on-1. He shouldn't be blocked 1-on-1.

I know, I cheated by putting 2 players on 1 slide. It's because I feel that these 2 guys are clones, except one is more famous.

This dynamic duo is the face of the Colts defense.

They have played opposite one another since 2003 and have been a nightmare to QB's ever since.

Note: If you want to fast forward, the sack-fumbles start at 1:52 in the video. Sorry for that inconvenience.

Even though he had a slow first half in 2010, Allen played like his usual self and ended up with 11 sacks.

I tried my best to keep outside linebackers off this list, but Ware is so good (and puts his hand into the ground so often) that I wouldn't do sack-fumbles justice without putting him on here.

His sacks stats are ridiculous, and of course he's forced his fair share of fumbles along the way.

Now let's take a look at the #1 master of sack-fumbles.

Yup, there he is.

Osi Umenyiora is one of the few pass rushers that is always looking to slap the ball out of a QB's hands first. If he can't do that, then he'll make sure he at least gets the hit.

If you slap the ball out of the QB's hands, even if he doesn't fall to the ground, it counts as a sack and a fumble.

I wish I could find a video that can better demonstrate Osi simply slapping the ball out without touching the QB, but he does get 2 sack-fumbles in this video, so enjoy.

Umenyiora did this multiple times, and he is famous for it.

Since when do defensive players record double-digit forced fumbles?

Of course, there are other stat categories available, like pass deflections and fumble recoveries.

Many combinations available, and they are all tough to do.

But Osi has his double-double with 11.5 sacks and the 10 forced fumbles.

Please feel free to share your opinions about who's best at sack-fumbles and where they should rank.

But for now, I will leave you with the first sack of Rashard Mendenhall's career.

It was impressive enough to earn my honorable mention.

I believe Mendenhall will become a fine sack artist if he decides to switch to defense.