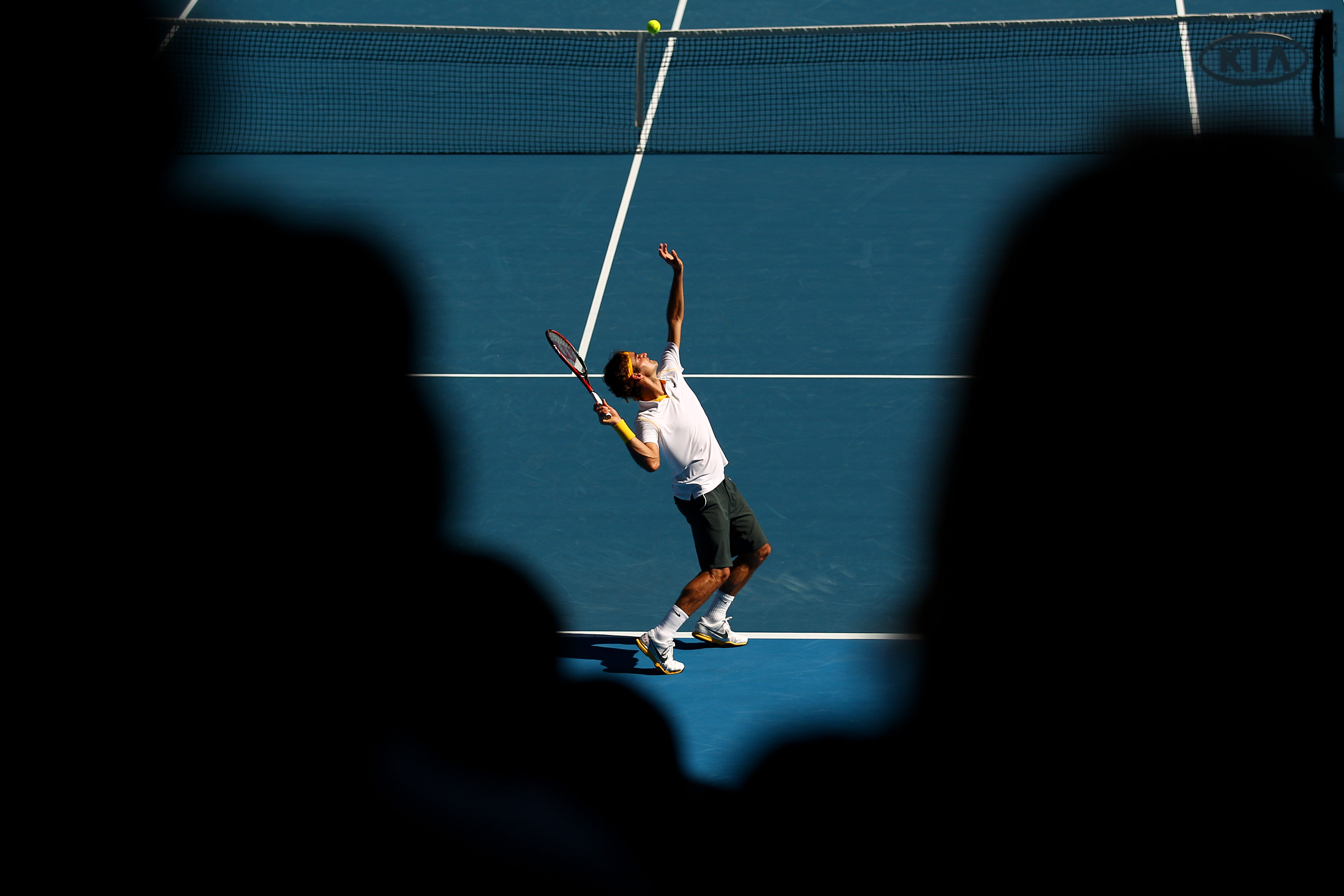 The 2011 Australian Open warm-up period is definitely over in Melbourne as the quarterfinal stage has been reached.

Roger Federer will kick off the contests on the men's side having just added one more record to his tally.

Very impressive numbers for the No. 2 seed, who will take on fellow Swiss Stanislas Wawrinka for a place in the semifinals.

On the women's side, No.1  Caroline Wozniacki has been drawn with Sunday's hero Francesca Schiavone.

Schiavone beat Svetlana Kuznetsova 16-14 in the deciding set, breaking the record of the longest women's match in the Open era.

The Dane or the Italian will face either Germany's Andrea Petkovic or China's Li Na, who will be playing the first match of the day in Rod Laver Arena. 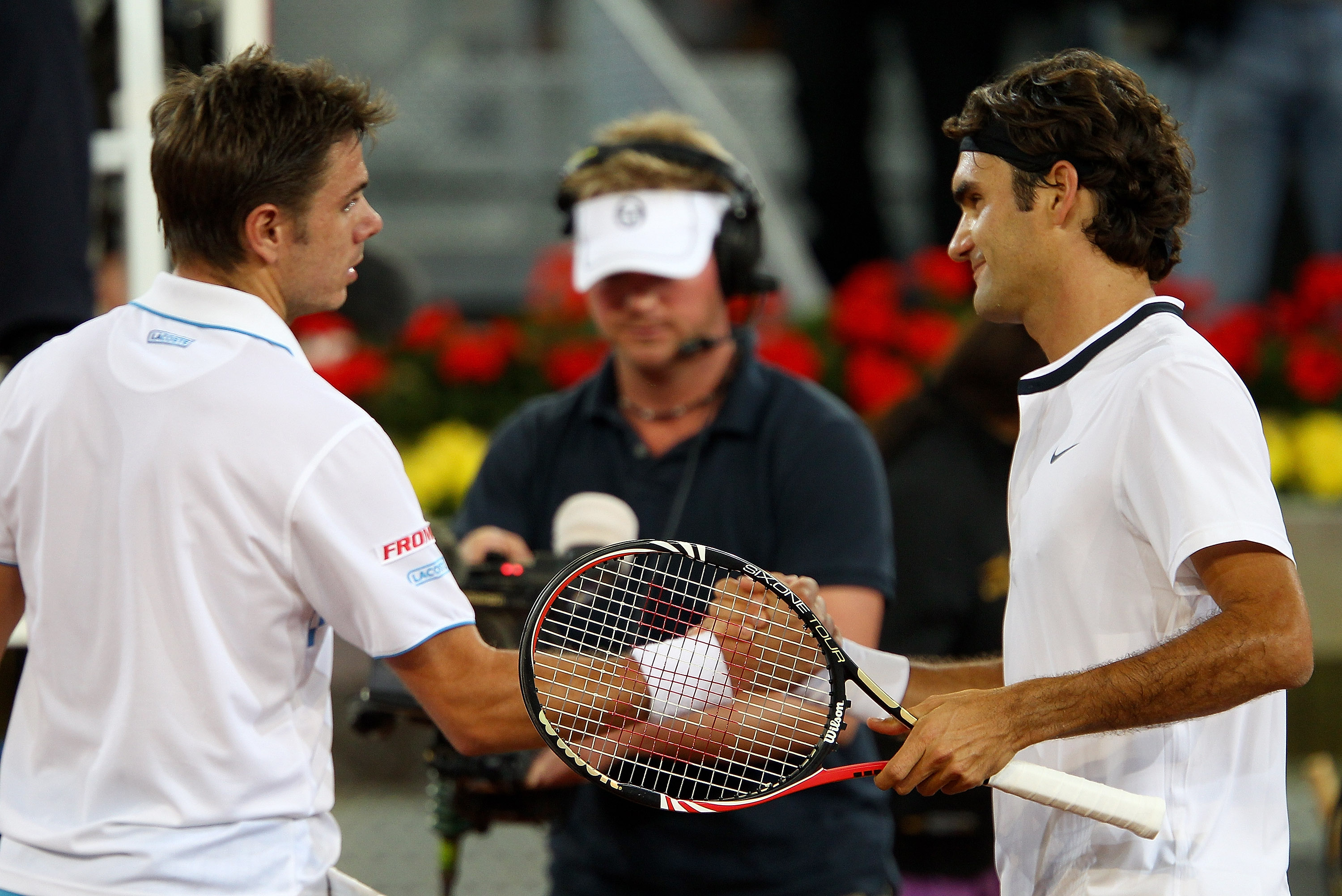 This is the first-ever meeting between two Swiss men in the quarterfinals of a Grand Slam. The previous time two Swiss met was in the French Open in 2010 when Federer defeated Wawrinka at Roland Garros in the round of 16.

Lundreng was Federer's coach from 2000-03 and was in the maestro's box for his first major triumph at Wimbledon in 2003.

The Swede and the former world No.9 joined forces last July after Wawrinka split from long-time coach Dimitri Zavialoff after his first-round loss at Wimbledon.

Head-to-head, Federer leads the series 6-1. Stan 's only victory was in 2009 on clay at Monte-Carlo.
But the understudy thinks he has the form to cause an upset today.

"I am playing my best tennis ever, so it's going to be different," Wawrinka said after his 4th-round victory over Andy Roddick.

"Everybody knows that Roger is the best player ever at the moment and we know that when he's playing his best tennis it's always tough to beat him."

Things are simple with Federer: If the 2nd seed can dictate the play early on with no gaps of concentration, then he will prevail easily. However, if the 19th seed could find a way to break the Grand Slam maestro's focus then there's the potential for a difficult night for Roger. 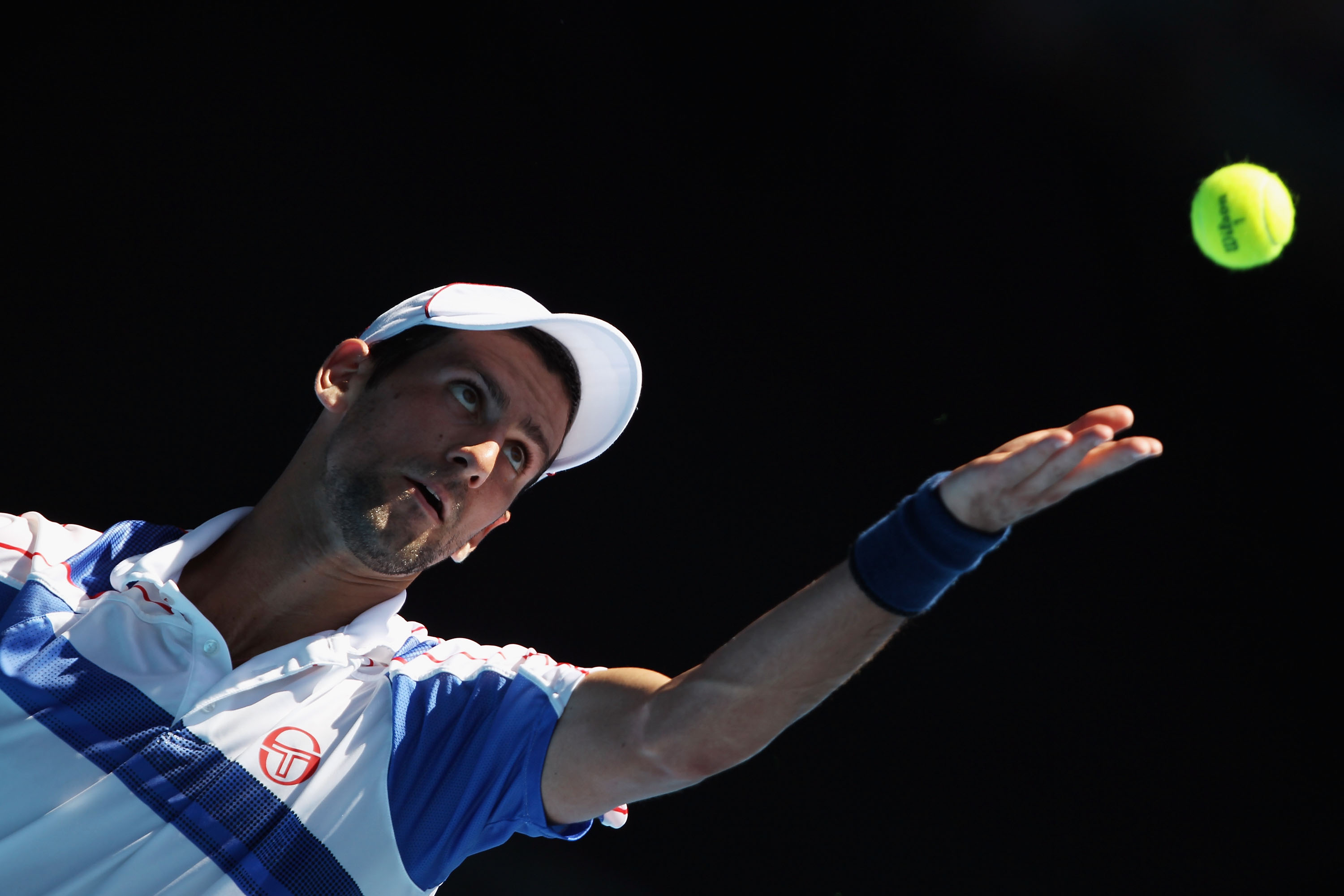 Another piece bad news for last year's Wimbledon runner-up: Djokovic has reached the quarterfinals or better in 14 of the last 16 Grand Slam events he has entered (including this one). This is his 25th- consecutive Grand Slam event.

The Serb will be seeking more than just a birth in the Australian Open semi-finals when he takes on Berdych.

Djokovic is also eyeing a bit of revenge after the 6th seed denied him a place in last year's Wimbledon final. Berdych defeated Djokovic 6-3, 7-6 (11-9),  6-3 at the All England Club for his only victory over the world No.3 in five career meetings.

In his previous match, Djokovic said he was intent on turning up the heat against Nicolas Almagro and he did just that, breezing past the Spaniard in less than two hours.

"Berdych loves playing on hard courts, big hitter. The match against Almagro was good," Djokovic said after defeating the Spaniard in the previous round.

"It's important to raise a level of performance before the quarter-finals."

"The matches are going to become more and more difficult, the opponents are higher ranked and the matches are tough and unpredictable," Djokovic said.

"But game-wise, I'm happy. I'm feeling good energy-wise. I didn't spend that much time on the court in the opening week. I look forward to the next challenge."

Berdych, who like Djokovic has dropped just one set en route to the final eight, said he would draw on his Wimbledon experience rather than dwell on his two previous losses to the Serb when he makes his quarterfinal debut at Melbourne Park.

"I just to have try to forget the last two meetings that we did together and try to think about the match we played in London," said the man from the Czech Republic. 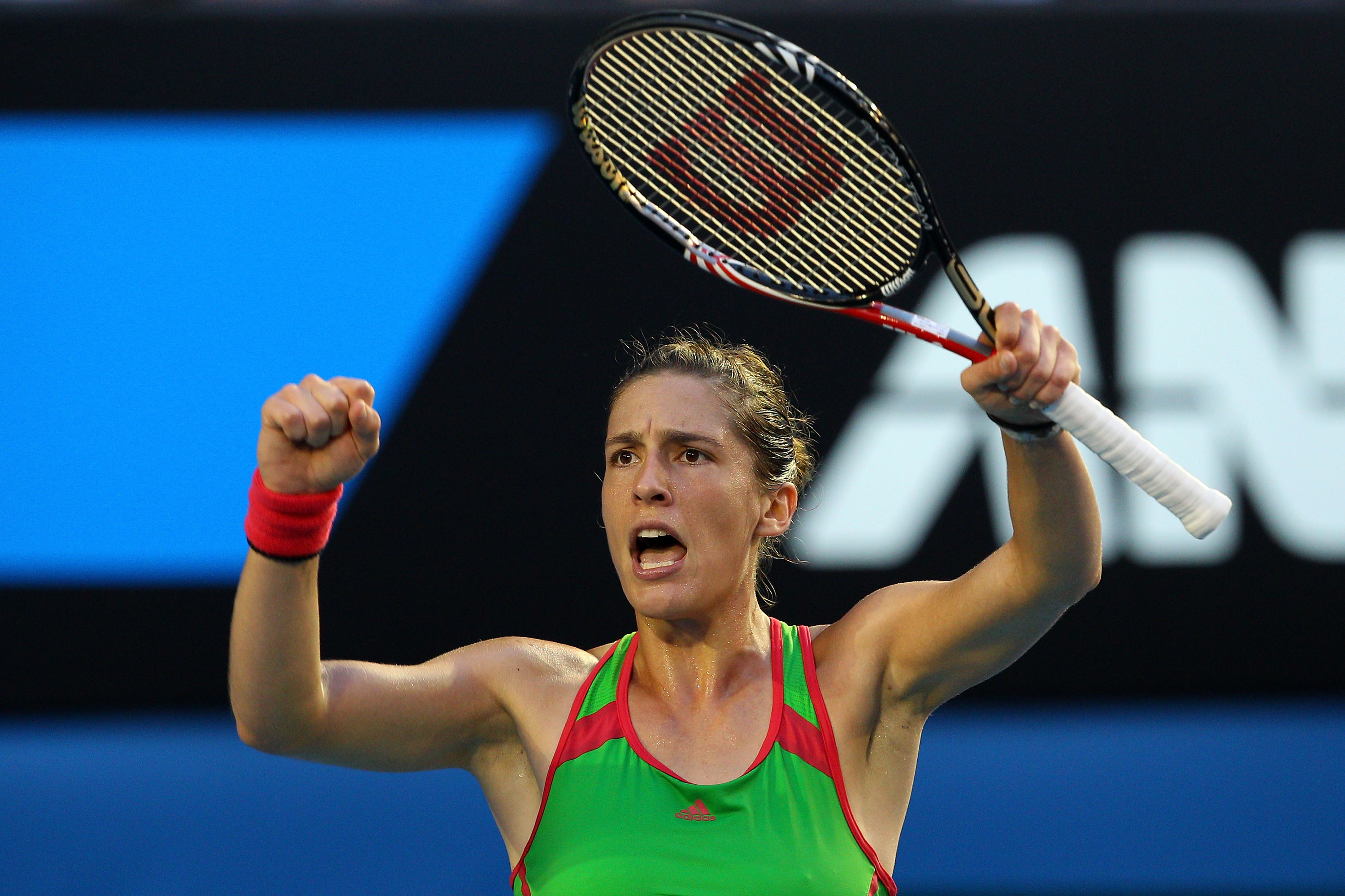 Li Na has dropped just 20 games in her four matches so far, the fewest of all players in the top half of the draw.

It should give her an edge over the young German.

Both players have never met before and a first meeting between top athletes should favor the more experienced.

Coming on top of her win in Sydney, it's obvious Na's husband Jiang Shan is delivering in his new role as coach; they seem to have a sense of humor which keeps the running smooth.

For Petkovic, the key will be to avoid a letdown after a heady few days.
She wasn't thrown when Venus retired from their fourth round match after one game, refocusing to show the world what she can do by dismissing Maria Sharapova in straight sets.

Like Li, the 23-year-old has a big game and is supremely fit, which has done wonders for her confidence.

If Petkovic prevails, she'll be the first German woman to reach the semis at Melbourne Park since Anke Huber in 1998. If Li wins, another Chinese record—back-to-back semis at the same Grand Slam—will be written.

No. 1 Caroline Wozniacki (DEN) Vs. No. 9 Francesca Schiavone (ITA) 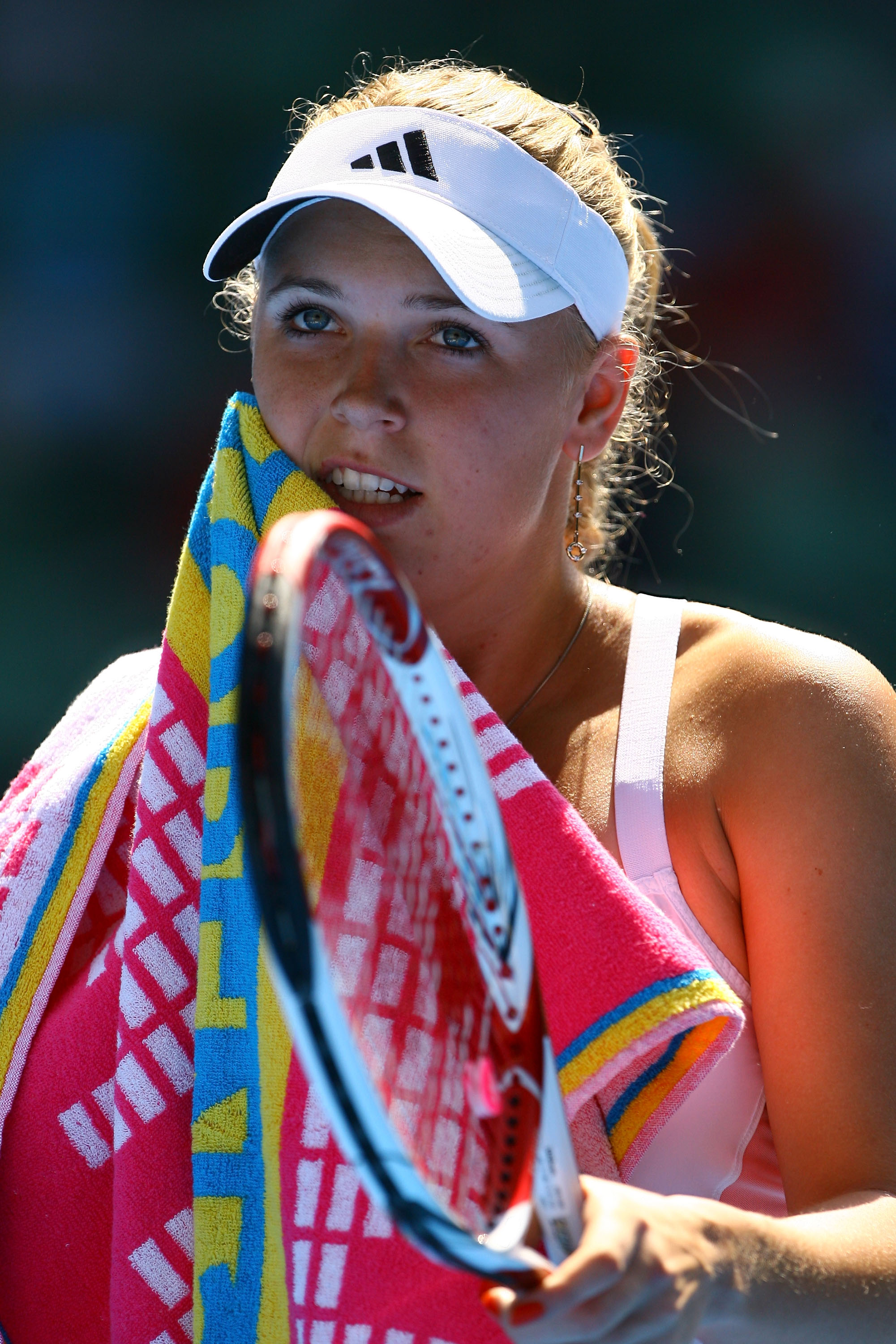 Francesca Schiavone has spent more than twice as long on the court than any of the other quarter-finalists in this half of the draw (11 hours 7 minutes) so the obvious question is, will she be sufficiently recovered?

Of course the issue came up in her press conference after the epic Kuznetsova match. It may be worth noting that at her last meeting against the decade-younger Wozniacki, the Italian grabbed the first set but faded fast after that.

In any case, it will be up to her to make the moves, and if she executes, she has a good shot at victory.

Meanwhile, the world No. 1 is also playing her first Australian Open quarter-final.
Wozniacki has had dominating wins thus far, which should provide the 20-year-old enough mental strength to seal the deal in straight sets.