The 10 Funniest Athlete Sketches of All Time 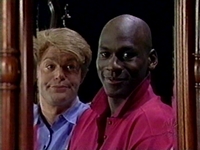 If you're on this site, you're a sports fan.  And as a sports fan, you love your favorite athletes.  And why wouldn't you?  They're good at a lot of things.  Being athletic.  Being rich and famous and successful.

But most sports fans know that one thing most athletes aren't actually very good at is being funny.  I mean, they're often unintentionally funny, like when they say things like "both teams played hard" and "we talkin' about practice".  But they're rarely doing it on purpose.

Occasionally, however, there are exceptions to this rule.  We know these exceptions exist, because there is video proof of them all around us.  Come, I'll show you ... 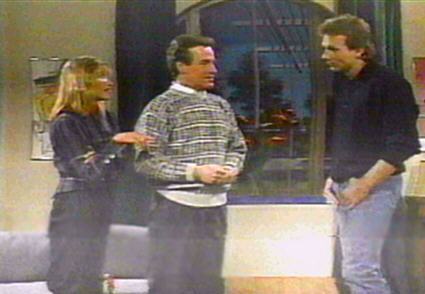 This gets bumped down to the bottom of the list as an honorable mention simply because I couldn't find an actual video clip of it anywhere.  I join in the pleas I've already heard from others to uncover this gem.

The clip comes from an episode of Saturday Night Live in 1987 when Joe Montana was the host.  In it, Montana plays a character named 'Sincere Guy Stu'.

The setup is that Phil Hartman and Jan Hooks' characters, Dan and Leslie, are on a date when Montana, as Hartman's roommate Stu, shows up unexpectedly.  Throughout the scene, each character's internal thoughts are recited out loud to the audience, so we know exactly what everyone is thinking.

Dan and Leslie's thoughts are the polar opposite of almost everything they're actually saying, but not Stu's.  He says exactly what he thinks, no exceptions.  Including at the very end of the scene, when Stu tells Dan and Leslie where he's going.  For those unfamiliar with this sketch, I'll let them read the transcript, so as not to spoil the punchline.

Michael Phelps was the hottest sports personality in the world after his astounding eight gold medal performance in the 2008 Beijing Olympics.  So it was natural that NBC wanted him to host the season premiere of Saturday Night Live.

In it, he details how he's able to stay in perfect shape for swimming, simply by eating 12,000 calories a day.  Sure, that diet actually does work for him, he's not even joking about that.  But that's because he's swimming laps morning, noon, and night, and needs that much for fuel.

But what would happen if you were just a regular dude and ate like him?  Thankfully, we have this handy infomercial to tell us ... that you'd almost certainly die.

The December 13th, 2009 episode of The Simpsons featured a story about Bart wishing that he had a brother.

In the episode, Bart dreams about different ways his life would be different if he weren't the only boy in the family.  It features cameo appearances from various famous brothers, including (yep, you guessed it) the Mannings.

The clip features Peyton, Eli, and even 'other' brother Cooper (the one who had his football career cut short by an injury while he was still in school) engaging in some male bonding over (what else?) tossing the football around.

The three have some real acting chops, and you can feel the sincere, caring brotherly love just emanating off the screen, can't you?

8) LeBron James Wants You to Read to Achieve

LeBron James may be wildly hated as a self-centered, egotistical traitor today, but there was a time not so long ago that he was far more universally beloved.

That time was the 2007 season premiere of SNL.  Bron Bron was fresh off of leading the Cavs to the NBA Finals, and was looking to broaden his appeal.  This show featured a number of funny sketches, including one with LeBron wearing spandex and sporting a jheri curl in a Solid Gold parody.

But my favorite was the Read to Achieve public service announcement.  Bill Hader stars as Mike Underballs, the director, and LeBron plays himself, simply trying to get through a quick PSA reading.  But Jason Sudeikis steals the show as Jeff, the bitter stagehand.

Jeff isn't intimidated by LeBron, and ends up challenging him to a game of one-on-one.  And he would've taken him, too, if it weren't for that cheap shot!

Charles Barkley became the first basketball player to ever host SNL twice when he made his return on January 9th, 2010, after first hosting 17 years earlier.

Of course, he's not exactly a player anymore, he's a commentator, and some of the sketches played on that fact.  But above all else, what is retired Sir Charles known for?  Why, having one of the worst golf swings anyone has ever seen, of course.

Thankfully, Barkley has never been someone who couldn't laugh at himself, and he certainly continues to do that here.  He doesn't seem to have made any improvement, even working with legendary swing coach Hank Haney.

6) Michael Jordan Gets a Daily Affirmation

There was a time when he was suffering from feelings of self doubt.  Of thinking that he was going to be uncovered as a fraud.  How could he possibly ever be good enough?

Thankfully, however, there was Stuart Smalley.

Jordan hosted SNL on September 28th, 1991, just after leading the Bulls to their first NBA title.  Among the classic scenes was a Superfans sketch with George Wendt, but my favorite was the episode of Daily Affirmation with Stuart Smalley.

Al Franken played life coach Stuart Smalley a number of times, but none was more memorable than this one featuring Jordan, or, I mean, Michael J. (We have to protect his anonymity, after all).

Thank goodness Smalley got through to him, and taught him that he was 'good enough, smart enough, and gosh darn it, people like me'.  Who knows where Jordan's career would've gone without the advice.

Who can forget the iconic image of Kerri Strug clinching a gold medal for the United States in the 1996 Olympics with her triumphant vault, landing on one leg? (Never mind that the US would've won gold anyway, even without that vault).

SNL sure couldn't, and they brought her in for a segment on Weekend Update for the season premiere on September 28th, 1996.

She showed up with her 'brother', 'Kippi' (Chris Kattan), who looked ... and talked ... just like her.  But the highlight of the skit is at the end, when Bela Karolyi (Mark McKinney) shows up.  He scoops Kerri up in his arms, and implores Kippi that he can do it when his foot falls asleep.

Thanks to this skit, I'll always remember that whenever anything bad happens, all I need to do is 'SHAKE IT OFF!'

This video is the most recent, and perhaps the most obscure, entry on this list.

If you're not from the San Francisco Bay Area, you're probably not familiar with it.  But trust me, if you haven't seen it before, you're in for a treat.

The infomercial promotes a unique holiday song collection recorded by members of the San Jose Sharks this past December as a present for their fans.  Who knew that hockey players had such pitch perfect tone?  Such rhythm?  Such timing?

Among the soon-to-be holiday classics included are 'Grandpa Got Run Over By A Zamboni', and 'Holly Jolly Fist Fight'.

Nothing will make you feel more warm and fuzzy inside than the soothing sounds of the Sharks A Capella Holiday Album.  Just uh, don't invite Joe Thornton to dance any time soon.  You might get hurt.

Ah yes, the granddaddy of them all.

No collection of wild and wacky videos featuring athletes would be complete without this gem, which was amazingly, not recorded as a joke.

The Chicago Bears (or, the Chicago Bears Shufflin' Crew) steamrolled through the NFL in 1985, finishing 15-1 and dominating the postseason in a way few teams ever have, before or since, shutting out both the Giants and the Rams, and destroying the Patriots in Super Bowl XX 46-10.

Prior to finishing their historic run, though, they recorded a music video, using a funky new form of music, rap, as a way to promote the team.  The Super Bowl Shuffle became an instant hit, actually charting as a single as high as number 41, and even being nominated for a Grammy.  The song also spawned numerous imitations from other teams in the 80's who wanted their own new school anthem, but none were ever as successful as the original.

To this day, Jim McMahon is probably better known for being the 'Punky QB' than for his exploits on the field.

Yeah, Peyton Manning was already on this list at number 9, but that wasn't even really him, it was just his voice, so he gets a pass.

Besides, he deserves another mention for his job hosting Saturday Night Live on March 24th, 2007.  Yes, he's ubiquitous in all forms of media it seems, but we don't get sick of him because he's one of the rare athletes who doesn't seem awkward or stiff in this environment, and he can be genuinely funny at times.

Especially when he's playing off his good guy image while showing you how not to treat kids in a hilarious United Way PSA sketch.

In it, he teaches kids all the basics, like how to get a tattoo, how to break into a car, and most importantly, how to go sit in the port-o-potty as a punishment when you can't catch the ball.

I mean really, he throws the ball, you catch it.  It's not that hard.

My favorite bit of comedy involving athletes will always be the Season 3 episode of The Simpsons entitled Homer at the Bat.

To many fans, including myself, it still ranks as one of the best Simpsons episodes ever.  The basic story is that the Springfield Nuclear Power Plant softball team, led by Homer, advances to the championship game, prior to which Mr. Burns decides to hire ringers to ensure his team's victory.

The episode features such classic situations as Ken Griffey Jr. overdosing on 'Brain Tonic' and declaring "It feels like there's a party in my mouth, and everyone's invited", as well as Mr. Burns pinch-hitting for Darryl Strawberry with Homer, and rationalizing his decision by saying that he's "playing the percentages" (as a left-handed pitcher is on the mound, and Strawberry bats left-handed, while Homer bats right-handed).

I'd really like to show the entire episode here, but I can't, so, just go watch the DVD or catch it in reruns or something.  For now, just enjoy Mr. Burns run-in with Don Mattingly's sideburns (a scene written, amazingly, prior to Mattingly's real-life hair run-in with George Steinbrenner).