2011 Offseason Hopes: How John Elway, Pat Bowlen Will Bring the Broncos Back 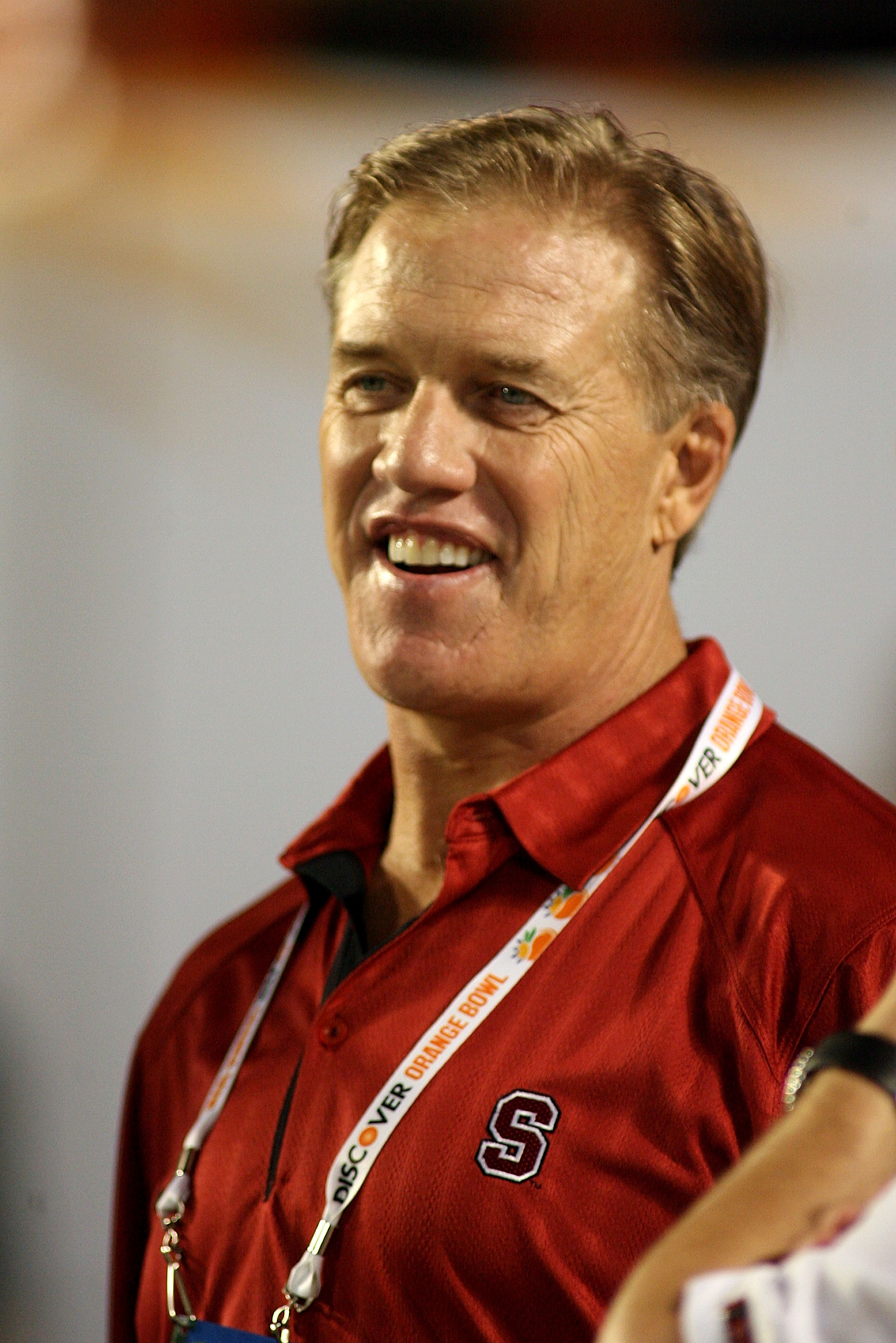 Wednesday is going to a big day for Bronco nation as the John Elway 2.0 era is ushered in . . . Let's hope he can conjure up another remarkable come-from-behind victory, this time from the front office. Here is a look at my hopes and predictions for what Elway does to reshape the organization during the off-season.

Pat Bowlen and Joe Ellis finally make the right decision and entrust their team to a veteran coach who has done it before.  They sign Jon Gruden to an incentive-laden and back-loaded 4 year contract to take the organization back to the playoffs.  He doesn't get the personnel overriding authority that Shanahan and McDaniels had, but 'Chucky' is fine with it because he has his franchise quarterback and is eager to beat up on Al Davis' Oakland Raiders. 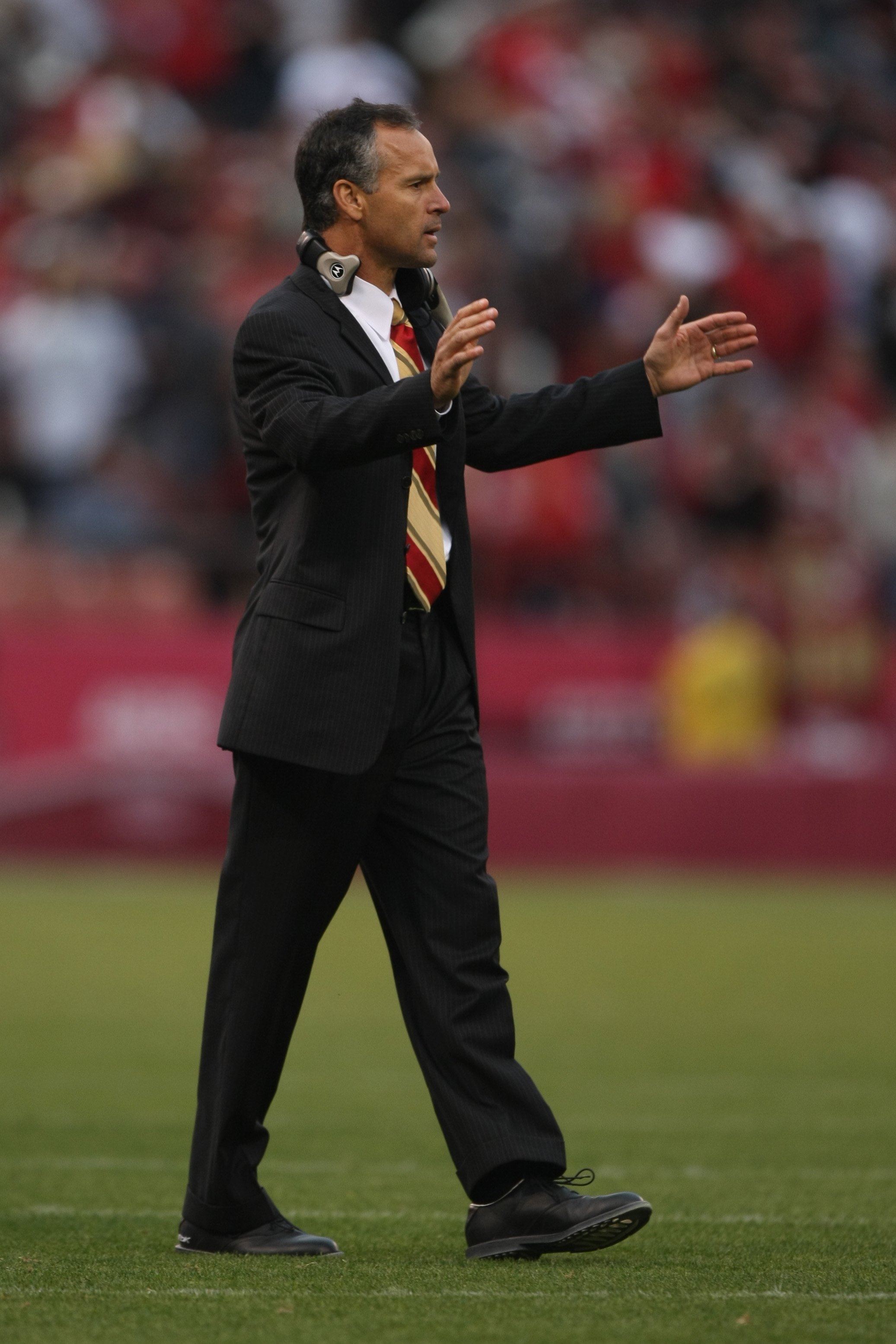 Gruden brings back Mike Nolan for his third tour of duty with the Broncos.  After the Dolphins floundered in the final leg of the 2010 season, Tony Sporano and his entire staff are dismissed and Nolan again is looking for a coordinator position.  If Mike Nolan isn't available, I would look at Marvin Lewis or Rob Ryan.... 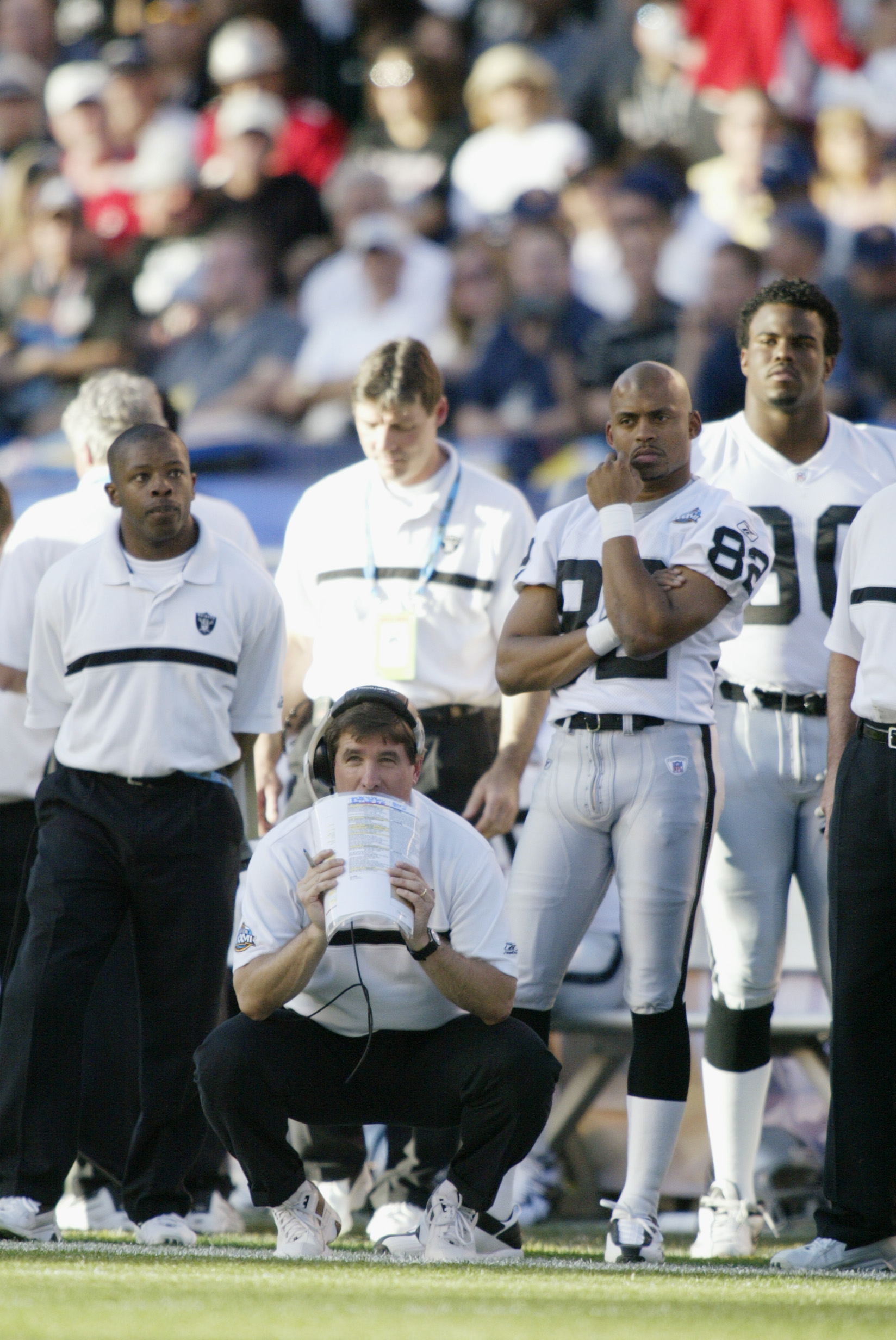 After hiring Jon Gruden as head coach, the Broncos bring in another former Raider coach (and friend of Gruden), Bill Callahan, to serve as offensive coordinator. While calling the plays for the Raiders, Callahan's offense was one of the best in the league.  He developed a complex offense system that requires a smart and committed quarterback, which would suit Tebow, a self-confessed 'football junkie.' After Gruden bolted for Tampa Bay, Callahan took over and was the last Raider head coach to have a winning season.  He leaves the New York Jets, where he is Assistant Head Coach, for a clear coaching position where he will be able to call the plays and develop a talented and fiercely intelligent quarterback.

Gary Kubiak would have been a perfect fit. He has all the qualities that make for a great coordinator, but something has been missing as a head coach.  Gary is one of the best possible coordinators for Tebow.  Don't forget that Jake Plumber had his best years under Kubiak's tutelage, and when Gary left Plumber plummeted to his worst season as a Bronco and ended up as his final year in the league. 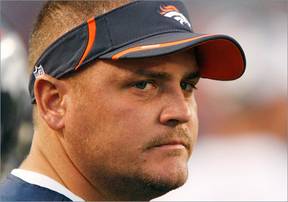 The GM position is officially given to the hardest working doormat in the NFL.  Brian Xanders is known for his diligent work and his creativity with crafting contracts, but is walking on thin ice because of his proximity to McDaniels' poor draft choices and trades.  Xanders has recently gone on the record to say that he didn't have say in many of McDaniels decisions.  Ellis and Bowlen choose to give him a proper upgrade in position to allow him to redeem the personnel gaffes that defined the McDaniels era.  Xanders takes the position and ends up drafting the best class in Denver history. Which leads me to the Broncos 2011 NFL Draft....

Either player is a top 5 stud who can play in the 4-3 or 3-4 and will be able to provide the type of disruptive presence on the 2011 Broncos defensive line to make them a completely different unit.  It doesn't matter if Andrew Luck chooses to enter the draft or stay at Stanford.  One of these two defensive forces will be available and the Broncos will be wise to choose either one.

To solidify the secondary and provide competition for David Bruton and Darcel McBath, the Broncos will choose one of these safety prospects.  Moore is know for his superior pass coverage skills and good hands (he led the nation with 11 interceptions in 2009), but needs work on his run defense.  Williams is a bit more well-rounded and is an exceptional tackler.

This pick will be dependent upon who they take with their first pick.  If they take Bowers then they take Powe, if they take Fairley they take Crick.

After the first round the Broncos will choose another defensive lineman to compliment their first round pick.  Crick is a dominating force for a Nebraska defense.  He filled into Suh's absence and put up some numbers that mirrored #2 overall pick last year, Gerald McCoy (9.5 sacks and 63 tackles with 16 tackled for a loss).  He is known to be a student of the game, so his enthusiasm could match Tebow's but on the defensive side of the ball.  He projects as a good fit for a defensive end in the 3-4 defense.

Jerrell Powe is a big and strong nose tackle prospect.  He is a mature 24 year old who isn't the brightest prospect (he has had lingering academic issues), but wonderlic scores don't ever project success for nose tackles.  He would be a big body and immediately help the run defense.

The Broncos take two of these three linebackers.  They haven't made a good pick at linebacker since DJ Williams.  Any of these guys will bring a new passion and youth to the middle of the defense.

Sheppard is my favorite of the bunch.  He is unquestionably the leader of the LSU defense and has the leadership intangibles of Brian Dawkins.  A coaching staff favorite, Sheppard led the Tigers in tackles with 108. He would be a great complement linebacker inside with DJ Williams.

Casey Mathews would be another great fit as an inside linebacker.  As Clay Mathews III younger brother, he clearly comes from a great football family.  Casey is a hard hitter and would give the defense some swagger.

Finally, Chris Gallippo is another product of USC's consistent linebacking core.  If he comes out early, the broncos should draft him in the middle rounds.

Several mock drafts have the Broncos taking a top flight corner back with their top pick.  I don't see it.  It doesn't matter who you have in the secondary if your team can't put pressure on the quarterback (thus they pick Bowers or Fairley).  However, they draft CU's best defensive player to provide depth and competition for an emerging young secondary (Cox, Thompson, Vaughan).

Finally, making the only pick on the offensive side of the ball, the Broncos pick a tight end for the future. Rudolph is well known as the best prospect in the draft and would stretch the field, but can block better than the last Denver tight end that was known for his receiving ability (Tony Scheffler).  In order to get Rudolph, the Broncos will probably need to use their first 2nd round pick even though he has a history of injuries.

If they choose to go defense with that pick they can take DJ Williams, another talented tight end later in the draft.  Williams is a better blocker than Rudolph, and has scored 10 touchdowns with 1800 yards receiving during his three years starting at Arkansas, so he would be a nice big target for Tebow in 2011.  Lance Kendricks from Wisconsin could also be a good fit.

The Broncos pony up and make sure that Champ Bailey finishes his career in Denver.  Bailey comes back because he loves the organization and is convinced by Gruden that the team isn't as far from the playoffs as many think.  Champ has said several times that he'd like to stay with the Broncos, so Elway does the right thing.  Additionally, Champ believes in Tim Tebow and wants to be on the team as Tim takes over the reigns of quarterback.  They also re-sign Ryan Harris, to make sure to protect Tebow's blind side.  Other than that the organization stays away from the expensive old veteran free agent market, in favor of giving their young players more time to play and develop. 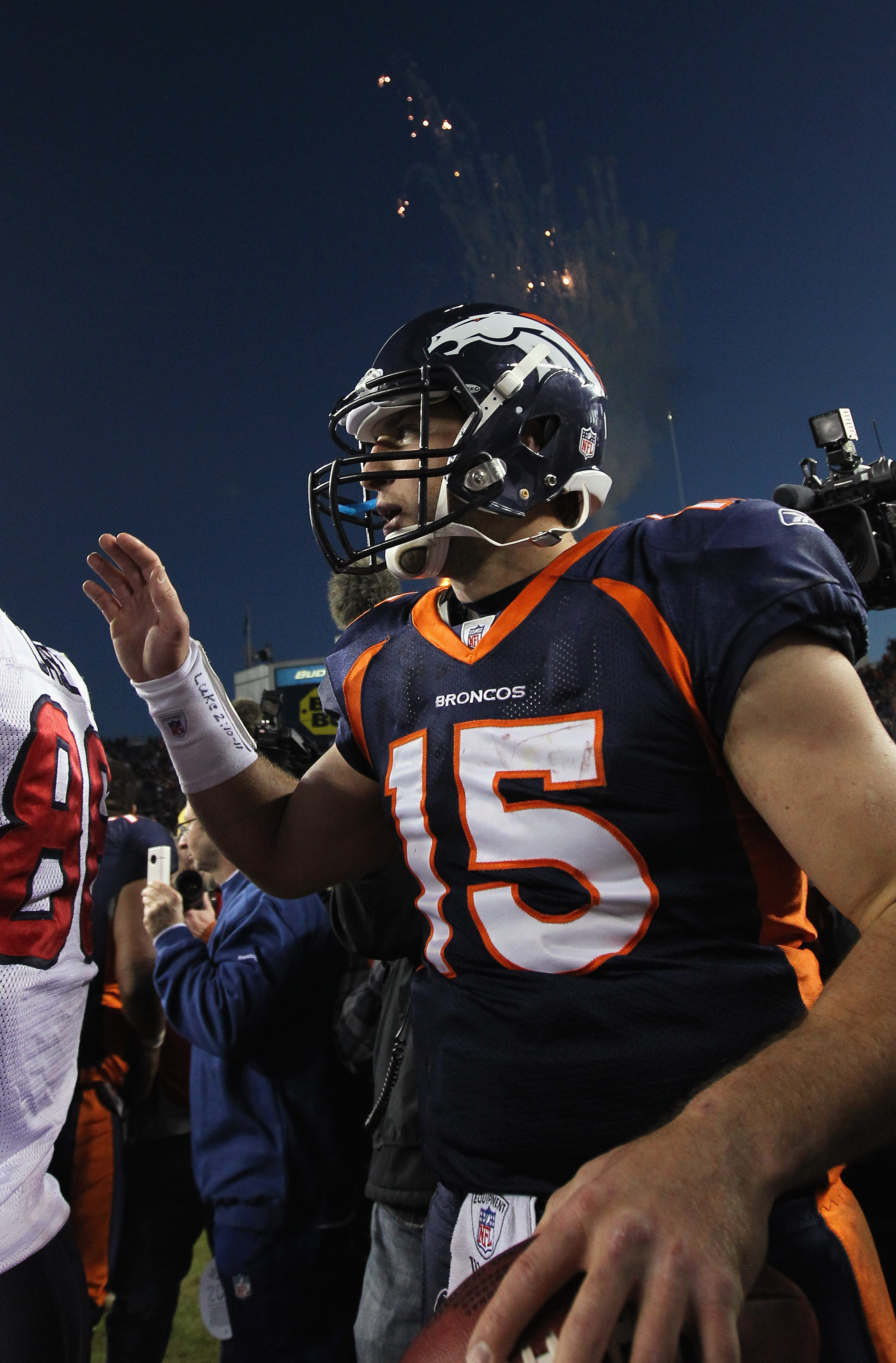 There's a formula for perfection in the NFL, and the Broncos are not exempt. Deft coaching choices, smart draft picks, further growth of a promising quarterback, and retaining a few key players will lead the Broncos not only to relevance but to glory.