Everything You Ever Wanted To Know about Moe Norman, Golf's Best Ball Striker 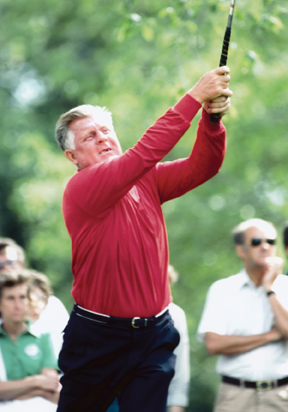 Murray Irwin Norman died in 2004. He was the greatest striker of the golf ball to ever play the game.

You never heard of him, right? Neither did I, so we'll let this settle in. Canadian golfer Moe Norman could hit the ball more accurately and better than Woods or Palmer or Snead, and he knew exactly where it was going every time he hit it.

You know how it's big stop-the-presses news when someone shoots a 59? Moe did it three times.

He had so many hole-in-holes it bored him. His vertical hole-in-one leap became less than Mikelson's. Moe Norman was said to be the "Rainman of Golf," slightly autistic, repeated his words often. One has to think maybe that's why his golf swing was so repetitious.

Seriously repetitious. The guy would hit 20 balls; all 20 would end up in a little circle you could cover with an apple crate.

So why hadn't you heard more about him?

He was extremely shy, for one. He didn't fit in with the golfing crowd. He dressed funny. And for other golfers to think you dress funny, you REALLY have to dress funny.

He was considered an "odd duck" which is a Canadian term distinguishing you from an "even duck."

He was very non-athletic looking. It might be one of the reasons he developed this strange swing, which now people are calling a "natural swing."

You'll see it on the videos. People are teaching his swing. I didn't know you could patent a swing, but there are folks teaching the Moe Norman method. I joined the Moe Norman Golf Academy to find out more about it.

There's also a company called Natural Golf Corporation out of Mount Prospect, Illinois which teaches the Moe Norman swing. Plus, they make special clubs so you can play the Moe Norman way. In 13 years, they've instructed over 200,000 golfers.

I'll try to make the slideshow entertaining and not dwell on the mechanics of golf. This will be more about honoring the humor and humanity of my new favorite odd duck—Moe Norman.

From Kitchener, Canada, a young bowling pin-setter gets invited to the Master's.

There's a lot of quirkiness in this character but lovable quirkiness..

The True Story of an Amazing Man

"Be your own best friend—have a good attitude"

"Golf isn't supposed to be work. It's to have fun."

Okay, good attitude. Doesn't fit me with my Master's of Self-Deprecation, but it might work for you.

A reporter asked Moe, after his drive had drifted about five feet into the rough, when was the last time he missed a fairway. Moe replies "About seven years ago."

There's a movie coming out about Moe's life. It stars Giovanni Ribisi as Moe. Perfect, right?

This next features a bartender telling the Moe Norman story. Be careful, the bartender has quite an accent.

An Interview with Moe Norman from 1963

That's the same year as the Kennedy assassination. So we have to ask, was there a conspiracy to keep Moe Norman from winning on the PGA?

Were conspirators hiding behind a grassy knoll whispering bad advice to throw Mr. Norman off his game?

Was there a triangulation of events designed to scuttle Canadians when they come in to compete in our tournaments?

There are tons of debate regarding Moe Norman's swing.

Some say, Moe included, that it takes more hand-eye coordination to do the Norman swing. Others say it's easier and more repetitive because you're not swiveling your hips and stressing your joints.

There are always two schools of thought for any activity. On their website, Natural Golf says this method is easier and simpler because you eliminate much of the hip and body rotation. Natural Golf emphasizes the palm grip, a wider stable stance, their trademarked Single-Plane setup and facing the ball at impact during the golf swing.

I promised not to dwell on swing mechanics, but there's no way to talk about Moe Norman without showing you his swing. Some call it pig ugly. Some say that's extremely denigrating...to a pig.

There's a chance if you learn the Moe Norman method your game will improve. However, don't count on the groupies flocking to you. Gals won't be running in your direction cause the ladies love the long ball.

This next video is a montage set to music of Moe's swing. Notice how he addresses the ball 9" behind the ball. There are possibly hundreds of videos analyzing and discussing Moe's swing.

Do you remember the line Moe said earlier "Golf should be fun. It is not a business." Well, he is wrong. While it might be fun, it's also a business. Especially Moe's swing. Moe's swing is big business.

Moe Norman Discussed by Guess Who, The Exec Director of Moe Norman

Earlier, I mentioned the Moe Norman Golf Academy I joined. Here's video by their executive director. And do you know who he likes...a lot? If you guessed Moe Norman, you get to see another video.

Can you imagine that? You've never heard of this guy, but he's immortal. His swing has been discussed and viewed over two million times on the internet.

And he's a shy guy. What if he were an extrovert?

He's in the Canadian Golf Hall of Fame. His bust is right there next to the Moosehead beer can. He was loved by many.

His name needs to be spread even more. Tell people that Silliman on Sports did a video story on him in Bleacher Report. Upload this story and send it to every golfer you know. No, check that, send this story to EVERYONE you know.

If you're on facebook, share it with all your facebook friends. I'm not trying to promote his academy or Natural Golf or any of the many golf entities spreading the good word of the short swing.

I'm trying to let everyone know about Murray Irwin Norman, a schlubby guy who left his mark on the world.

Whenever I can showcase a schlubby sports guy who done good, I will.