Boxing's 10 Most Disparaging Nicknames in History: Adding Insult to Injury 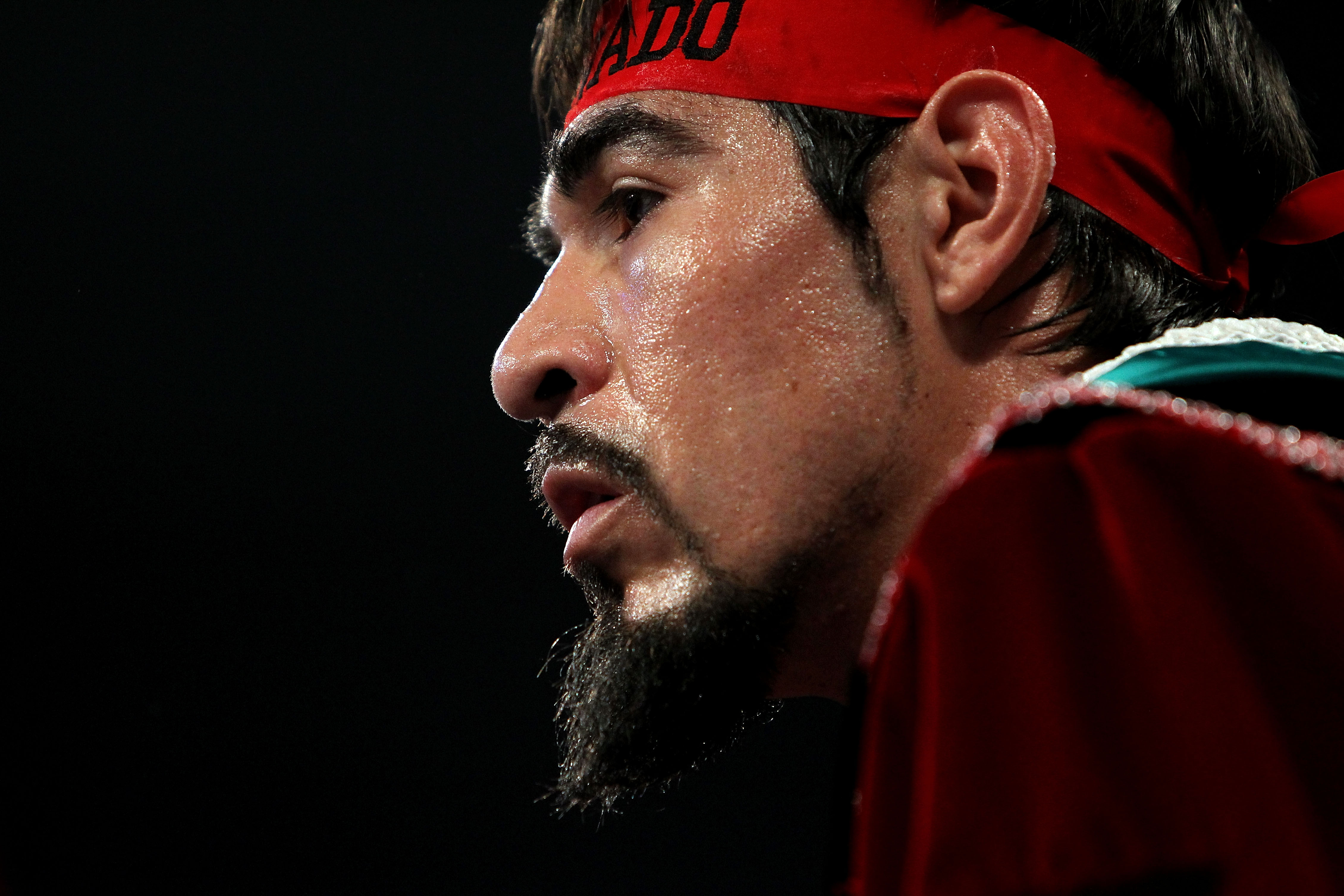 This is Part 2 of my series on the highlights and lowlights of boxing nicknames.

As I mentioned in my first article ("Top 10 Best and Worst 'Reused' Boxing Nicknames"), the sport of boxing is somewhat unique in that nearly all fighters have some sort of nickname, and several go through multiple nicknames in the course of their career.

Usually the nicknames help the fighter—they improve the boxer's marketability and tell the audience a thing or two about the person or their style of fighting.

Occasionally, however, nicknames have a more sinister motive. They are used to heckle or make fun of the fighter, and these disparaging nicknames sometimes catch on more than they should.

In this article, I take a look at the top 10 most disparaging nicknames in boxing history. 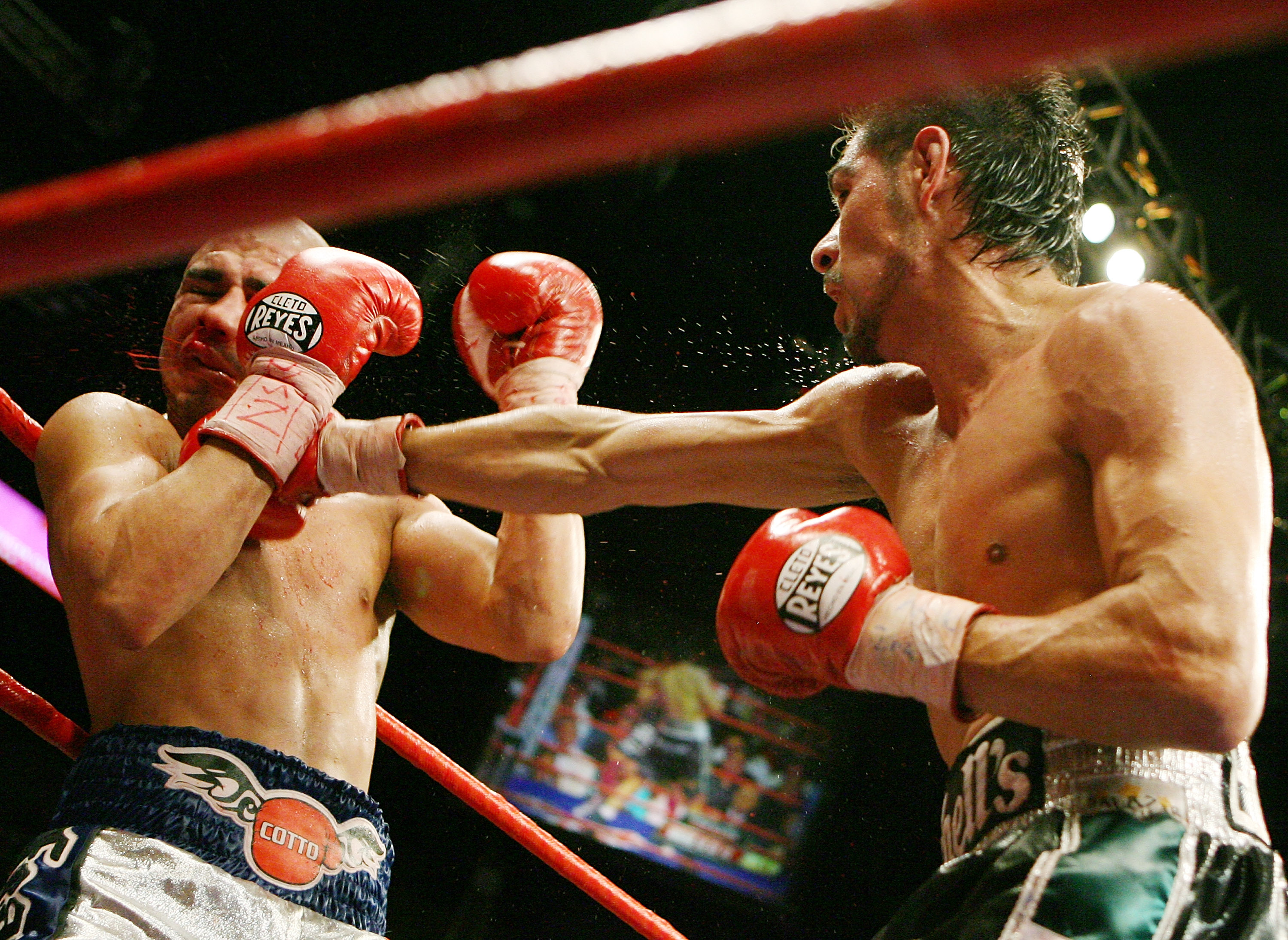 This is one of the few nicknames that will show up on the best and worst boxing nicknames lists, depending on the context.

Roberto Duran was feared as the "Hands of Stone," or "Los Manos de Piedra," during his long and successful career—so much so, in fact, that a four-time world champion (American Michael Carbajal) was honored to earn the nickname "Little Hands of Stone."

However, when a fighter is caught with illegal substances in their hand wraps, the nickname is often given to them derisively, which is the case with both Margarito and Resto. "Hands of Stone," in this case, is more a reminder of past transgressions than any sort of complimentary phrase. 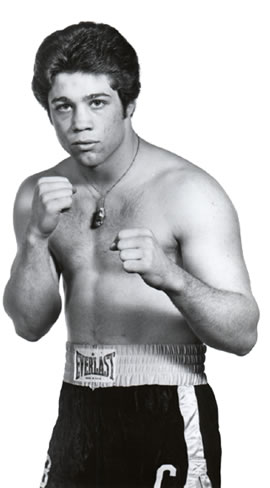 This was a difficult name to include on the list, because it wasn't really opposed by the fighter. However, its somewhat defamatory undertones land this nickname at No. 9.

For the younger fans among us: "Matinee idol" was a term used to describe male actors in the 1930s through 1970s who were adored, sometimes to the point of adulation, by their fans. It is similar to the term "teen idol" used to describe some music stars.

Usually, these stars were quite handsome and financially successful, but their appearance in matinee films (rather than the more relevant evening movies) didn't garner them much credibility among more serious movie fans.

Bobby Czyz was a former light heavyweight and cruiserweight world titleholder from New Jersey who fought from 1980 to 1998 and faced some of the top competitors of his day. He retired with a solid, respectable record of 44-8, with most of his losses coming in major fights against opponents like Evander Holyfield, Mustafa Hamsho, Virgil Hill and Charles Williams.

However, his inability to win in big-time fights, as well as his popularity, showiness and varying facial hair (he sported sideburns and mustaches at different times in his career), are probably what garnered him this nickname. Among his true fans, he was better known as "Chappie."

Czyz (pronounced "chess") was also impressive in other areas and belonged to the high IQ society MENSA, and in 1994 he began doing color commentary for Showtime. However, a series of drunk driving arrests resulted in him being released from his duties with the network around the turn of the century. 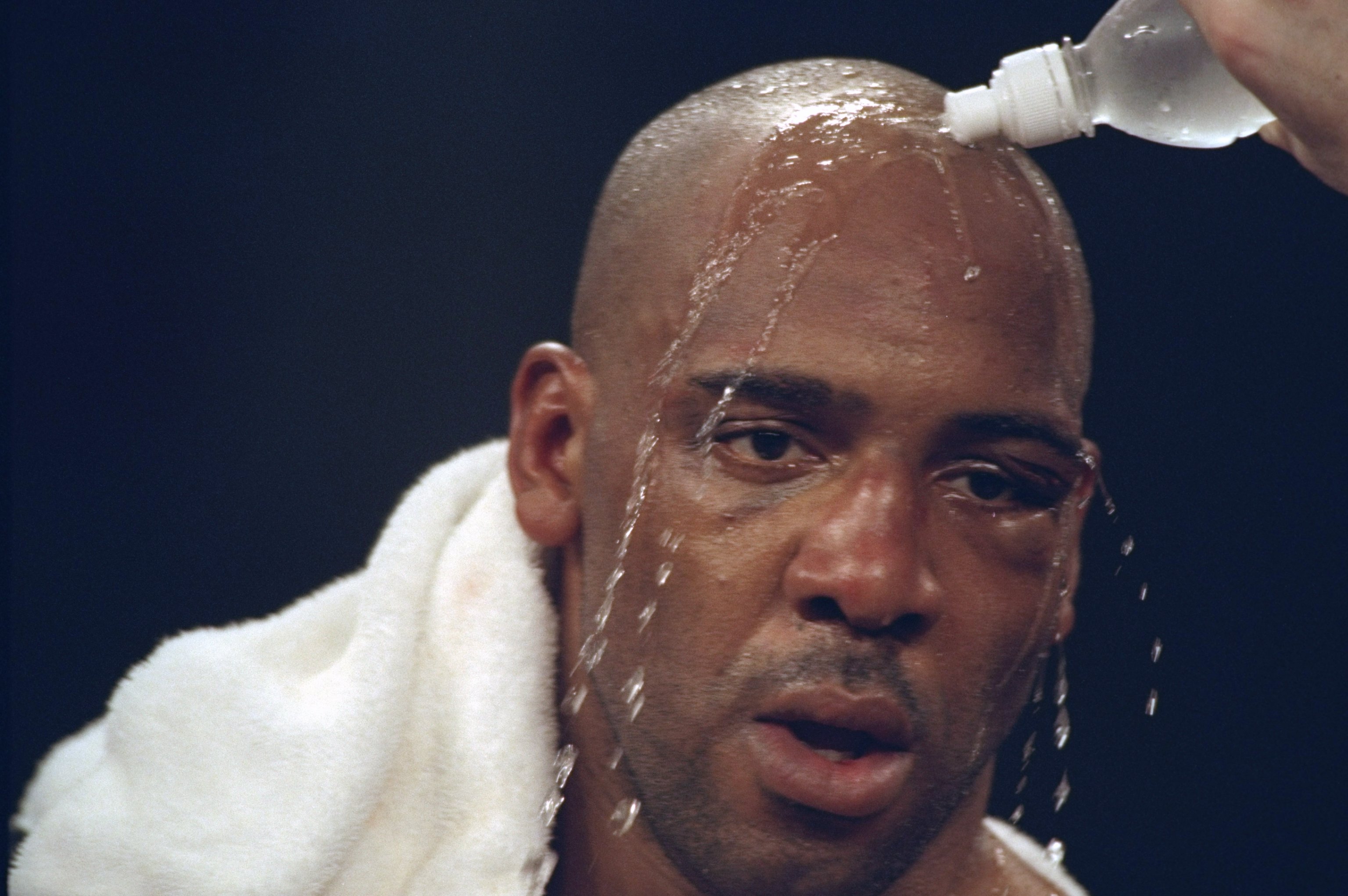 This is another unusual story, since the nickname was intentionally dumb and was hand-picked by the boxer's promoter in order to generate publicity and provoke sentiment toward the fighter.

The story gets even stranger, though, when you find out that the boxer actually decided to go along with it and tried to legally change his name to "Goofi."

His pro career didn't go poorly either, and he gained several minor titles, including reigns as the NABA and WBC NABO heavyweight titleholder. However, subsequent losses to Jameel McCline and Sultan Ibragimov essentially removed him from the list of viable contenders, and though he continues to box today, he has drifted into journeyman status.

Nonetheless, at the peak of his popularity, prior to his 2001 fight with McCline, his promoter, Rock Newman, decided to try out the "Goofi" nickname. It seems like the choice may have backfired. 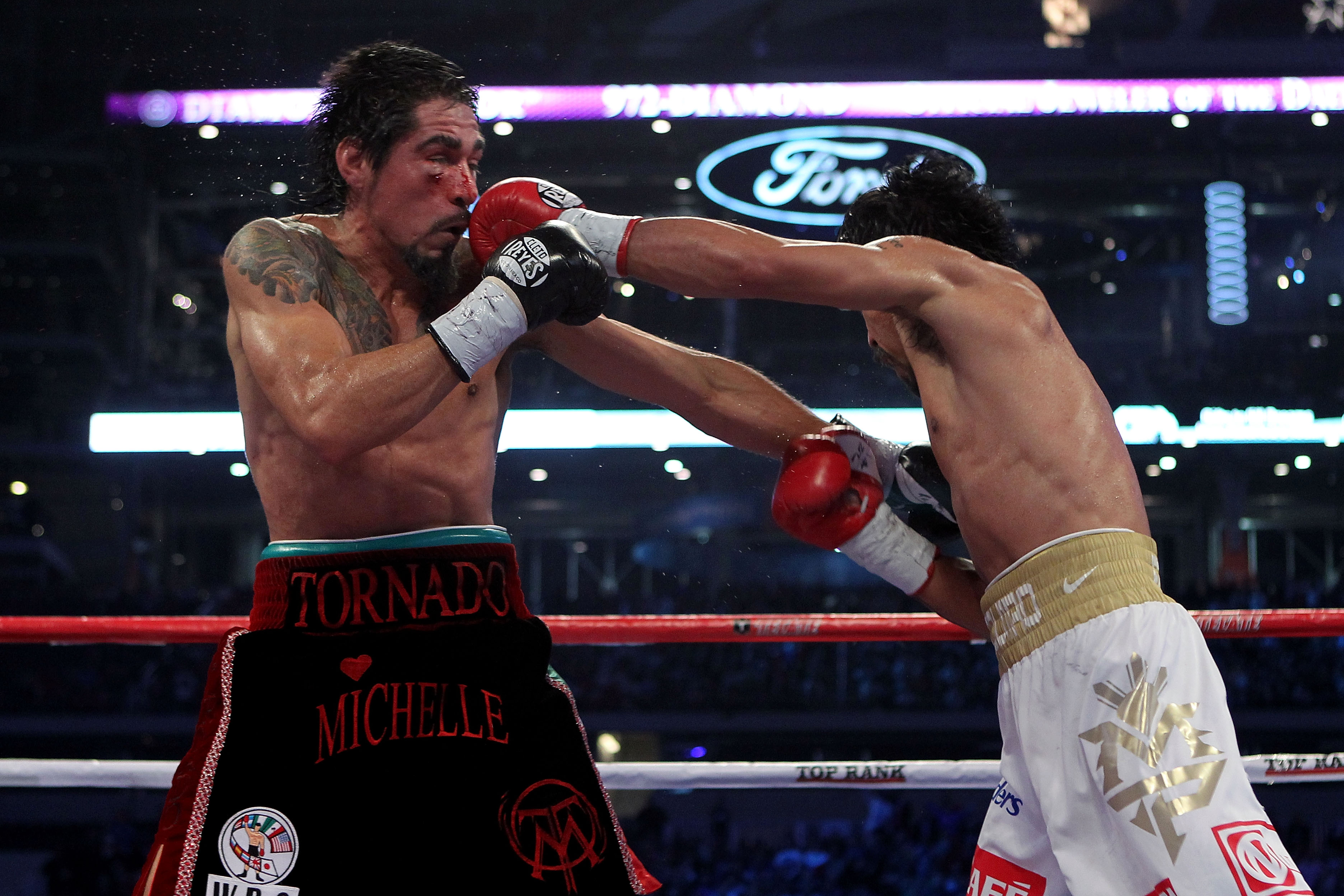 Another appearance by Margarito on the list. A nickname commonly used on boxing message boards and occasionally in articles, the reasoning behind this is clear.

Margarito prides himself (and rightly so) on being a part of a long line of tough, gritty fighters of Mexican lineage, but after he was caught with illegal substances in his hand wraps prior to a 2009 bout with "Sugar" Shane Mosley, disappointed boxing fans began looking for ways to poke fun at Margarito's dirty tactics.

"The Tijuana Tornado" became "El Cheato," a nickname that addresses his reputation as a cheater while also hinting at his Mexican heritage, and which conveniently rhymes with his last name.

Hopefully, with a few more big fights like the one he had in November with Manny Pacquiao, Margarito can shed his new nickname and go back to being respected as a tough, pressure-based brawler. 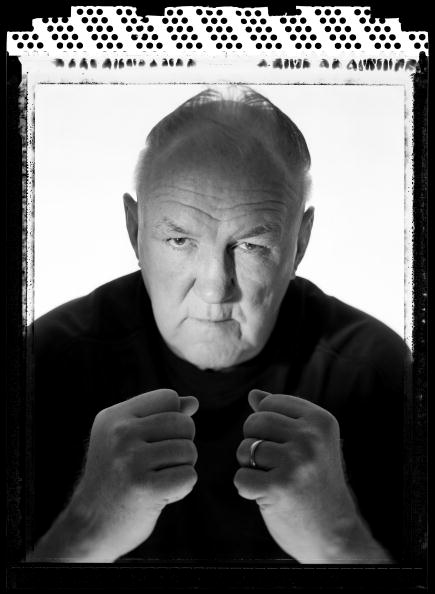 On March 24, 1975, Muhammad Ali stepped into the ring with Chuck Wepner, a relatively unknown contender from Bayonne, N.J.

Considering the fight happened during Ali's peak years and Wepner had lost to several fighters, including George Foreman (third-round KO) and Sonny Liston (10th-round KO), many people thought it would be a similar story when Wepner stepped in with Ali.

Clad in red, white and blue-striped socks, Wepner made history that night, in a few ways. First, he lasted into the 15th round with Ali and even knocked Ali down in the ninth round.

This was a gritty and unexpected performance and gained Wepner many admirers, most notably a young actor by the name of Sylvester Stallone, who became inspired to write the script for the film Rocky after watching Wepner's courageous performance and is even believed to have based the main character loosely on Wepner.

Wepner, around that time, gained the nickname "The Bayonne Brawler," in reference to his hometown and fighting style, but fans and media also began to call him "The Bayonne Bleeder," due to his penchant to cut easily against lower-quality opposition.

Chuck Wepner ended up having a serviceable boxing career and retired in 1978 with a record of 35-14. 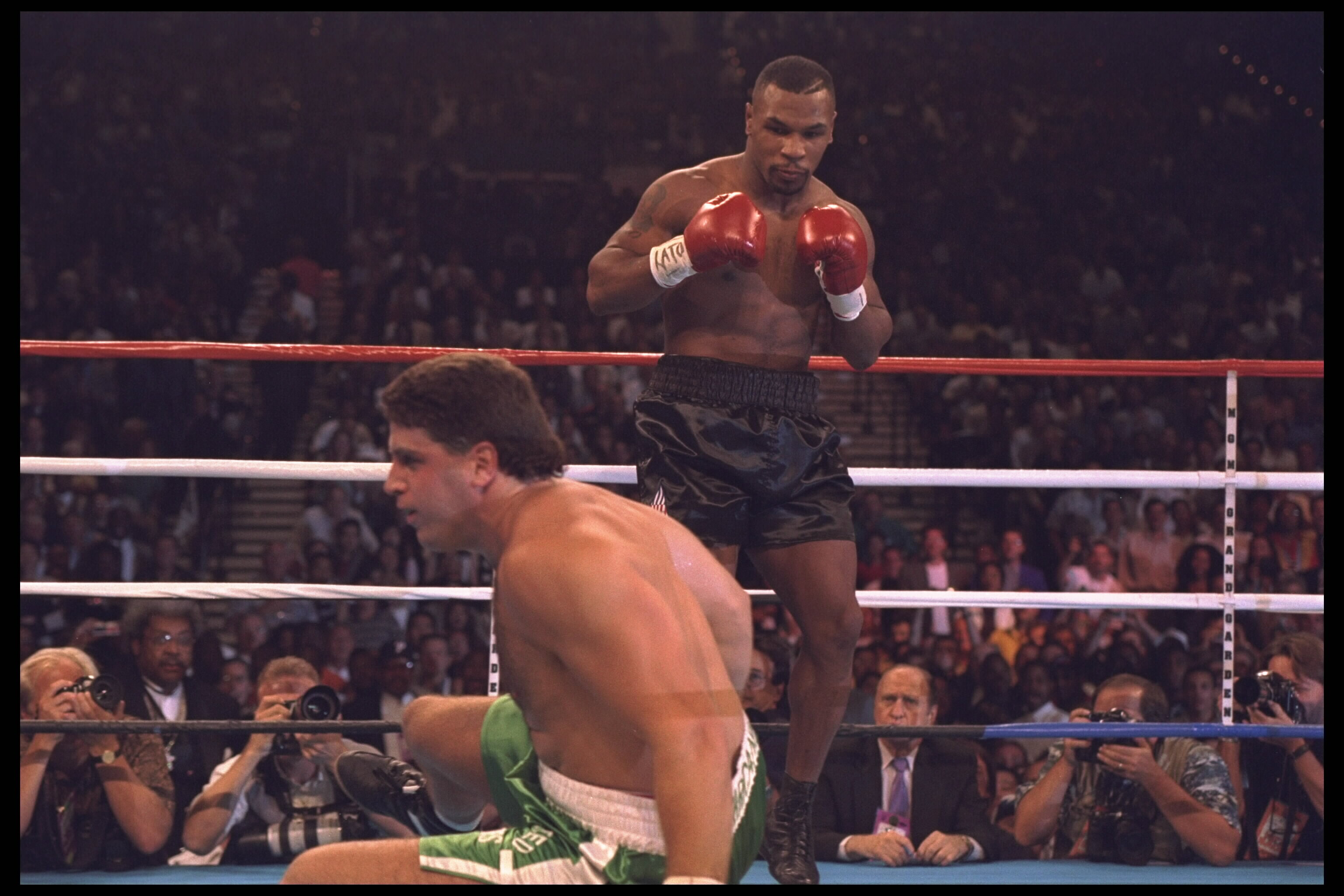 A "Tomato Can" is a nickname for an opponent of questionable skill who is lined up as an easy opponent  for a skilled fighter. The term is widely used in boxing and is so named because of these fighters' tendency to leak "tomato juice" (i.e. blood) in fights.

There are no fighters with the permanent nickname "Tomato Can," but some often cited examples are "Hurricane" Peter McNeeley—most famous for his first-round knockout loss to Mike Tyson—and Henry Cooper, a skilled boxer but a known "bleeder."

Occasionally, a "tomato can" will end up being a quality opponent, as was the case with Chuck Wepner when he went 15 rounds with Muhammad Ali, or Buster Douglas when he knocked out Mike Tyson in 1990. 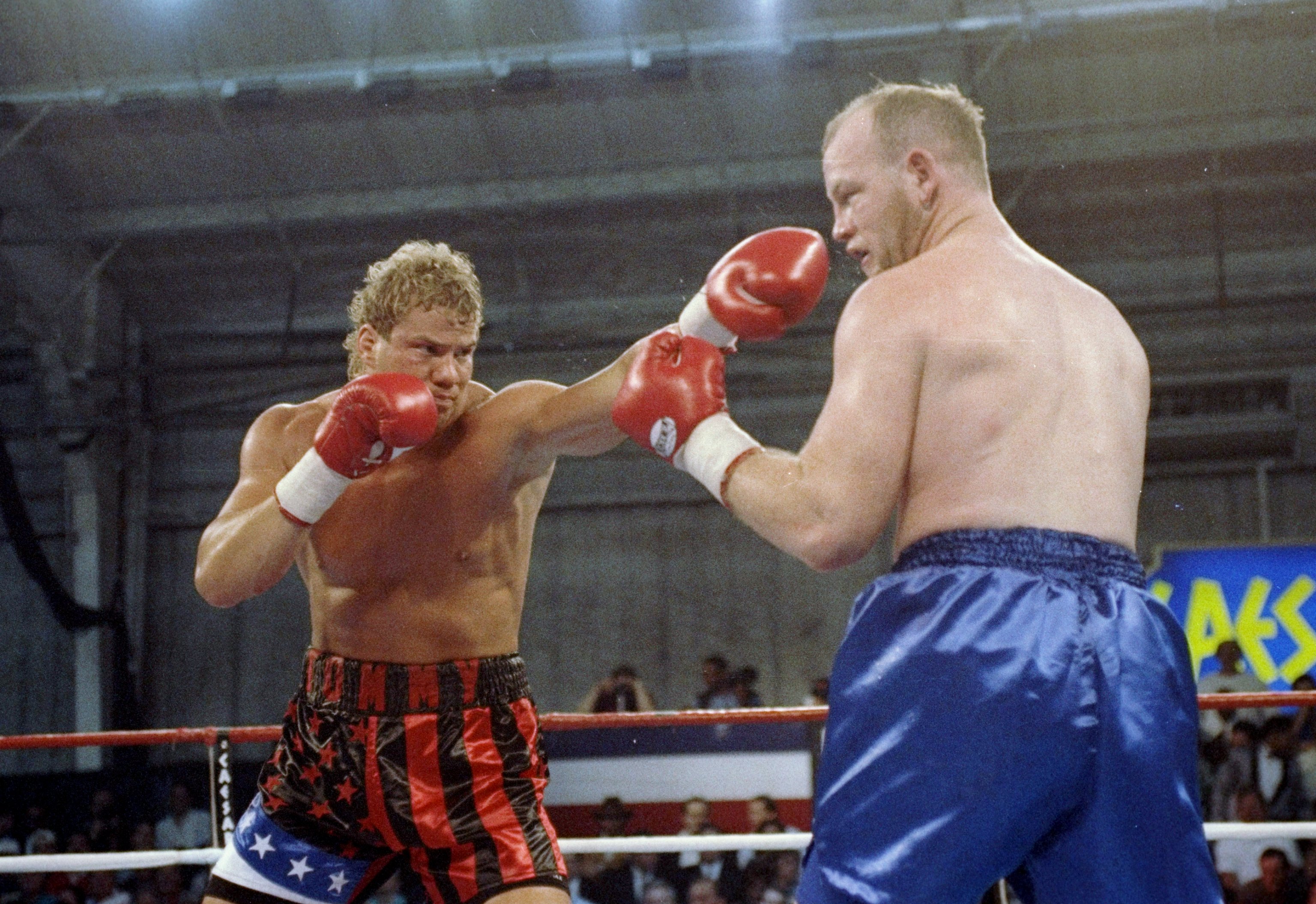 Jerry "Wimpy" Halstead (pictured, on the receiving side of a Tommy Morrison punch)

The origins of this nickname are hard to track down, and by many indications, it would be difficult to call Jerry Halstead wimpy. The Oklahoma heavyweight amassed a record of 84 wins (62 KOs) and 19 losses during a 17-year pro career and once held a very impressive 76-7 record.

Though records indicate that he never fought for a world title, he nonetheless had a serviceable career and fought against several big-name opponents, such as James "Buster" Douglas, Ray Mercer, Tommy Morrison and Wladimir Klitschko, as well as an Oklahoman guy who coincidentally happened to have the name "Michael Tyson."

Halstead may have earned his nickname due to his failure to get past major opponents and the fact that he retired on his stool after Round 2 in his bout against Mercer.

Whatever the case, it doesn't appear that the nickname "Wimpy" helped Halstead much in his boxing career, and he has unfortunately followed it up with a series of drunk driving arrests. Hopefully "Wimpy" Halstead can clean up his act and get a gutsier nickname. 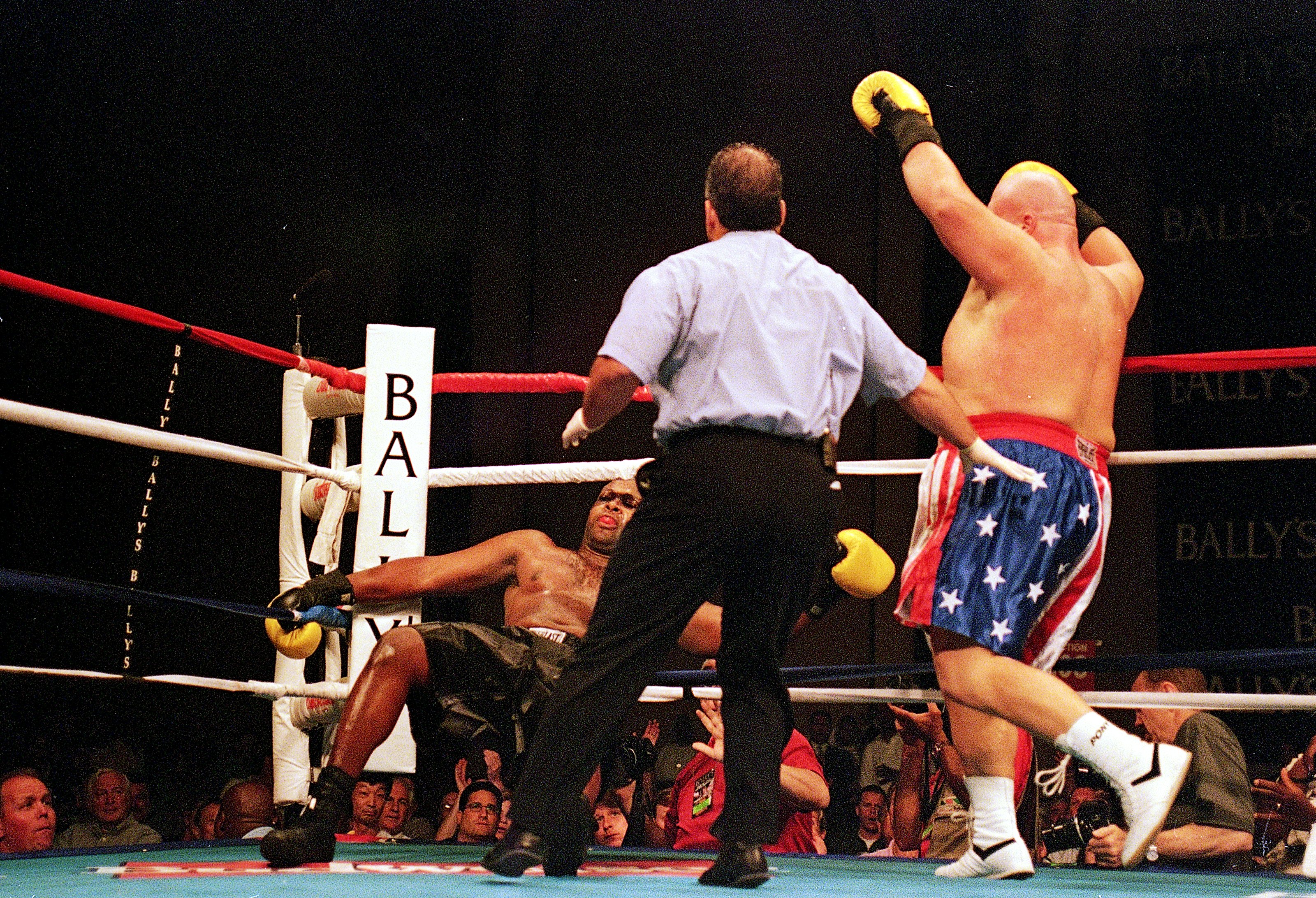 Eric Esch is probably the only fighter on this list who is probably better known by his nickname than his real name, and it's because Esch seemed to embrace it.

And why not? The nickname is probably the reason Esch is probably the most famous super heavyweight boxer in history and has probably made him hundreds of thousands, if not millions, in promotional money as a crossover boxing, kickboxing, MMA and professional wrestling star.

The reasoning behind the nickname is simple: Esch's round physique and shaved head give him the appearance of a "butter bean," which is the nickname for a tan-colored lima bean, often used in soups.

The fact that the boxer is now more famous (and shows up higher in search results) than the legume after which he was named is a clear testament to the marketing genius of Eric "Butterbean" Esch. 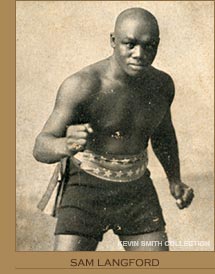 Unquestionably the saddest and most unfortunate nickname on the list, Sam Langford earned the notorious "Boston Tar Baby" nickname simply for being an excellent fighter in a time when African Americans were called all sorts of racist epithets.

The origin for the nickname is uncertain, but like many of the racially offensive nicknames of the time, it most likely came from an insensitive newspaper reporter.

The truth is that Langford wasn't even from Boston. He was Canadian, but fought in the U.S. and Mexico because of the higher quality of opposition.

As I mentioned in my profile of him at No. 6 in my article "Manny Pacquiao and the 20 Most Dominant Fighters of All Time," Langford was one of the most feared boxers ever.

Despite being a heavyweight who was only 5'6" and 185 pounds, Langford was so tough that Jack Dempsey famously said: "The hell I feared no man. There was one man I wouldn't fight because I knew he would flatten me. I was afraid of Sam Langford."

Dempsey wasn't the only one. Jack Johnson also famously dodged Langford for years, and Langford was never able to fight for the heavyweight title.

However, history has remembered Sam Langford favorably, and he is considered among the all-time greats by many sources.

One of the most fascinating boxers in the history of the sport, Bruce "The Mouse" Strauss was a boxer who was not only aware of, but decided to embrace, his somewhat dubious reputation.

A 5'8" middleweight from Oklahoma, Strauss' great notability comes more from his losses than his wins. Officially, he holds a record of 78-53, but he was also known to box under various aliases, most notably "Ruben Bardot," and it is possible he had upwards of 150 losses.

Both of those are impressive numbers, and he clearly had no problem poking fun at himself. In a 1990 set of Kayo boxing cards, he posed while sitting on the canvas, holding the ropes and wearing black makeup around one of his eyes.

He also boasted of being "the only boxer to be knocked out on every continent." If you exclude Antarctica, this fact is true.

His accomplishments did not go without notice. In 1996, a movie entitled The Mouse was released, featuring John Savage as the title character and also starring Rip Torn and cameos from several boxers, including Ray "Boom Boom" Mancini. Fittingly, the movie received mixed reviews.