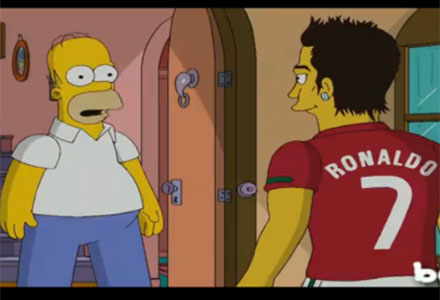 I've been thinking of writing this article for quite some time. I'm not exactly sure if it was a great idea or just a terrible one, if it will be well-received or heavily criticized. Still, there was only one way to find out: actually going through with the idea.

So that's what I did.

The following are twenty football players/managers who resemble pop culture characters, more specifically film and TV characters (cartoons included). I'm aware that some of the characters might be unknown to most, but I believe the majority of them will at least ring a bell.

Some resemblances are indeed pretty obvious, while others were admittedly a bit forced.

Some obvious and well-known ones (Rooney and Shrek, Hulk and The Incredible Hulk...) were left out because their inclusion was unnecessary.

Still, I hope you enjoy this rather unusual slideshow and provide feedback/suggestions or backlash, if that's the case. 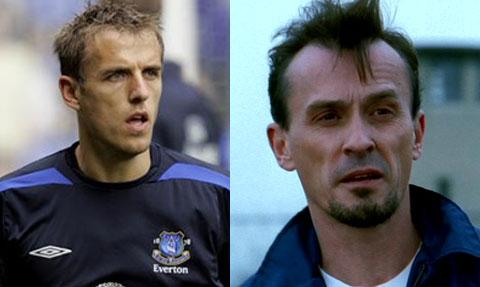 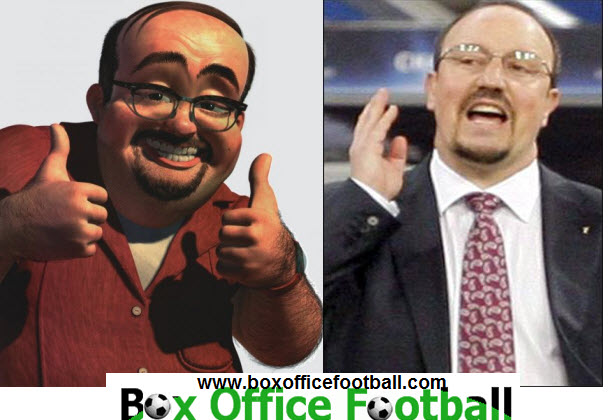 This one is very apparent. Looking at Rafael Benitez, it's difficult not to be reminded of this Toy Story 2 character.

Not only is the physical resemblance extraordinary, but Rafa also had his own collection of toys (useless players signed while at Liverpool—Alberto Aquilani anyone).

Sir Alex Ferguson: Gandalf (The Lord of the Rings)

Truth be told, the whole football world could be compared to characters from The Lord of the Rings, but that would eventually make the list too repetitive. Still, this one had to be included.

Sir Alex Ferguson is definitely the wizard in the football world. He knows exactly what to do and when, and he is the master of mind games. His trophy cabinet speaks for itself.

Supreme wisdom is what connects Alex Ferguson and Gandalf. 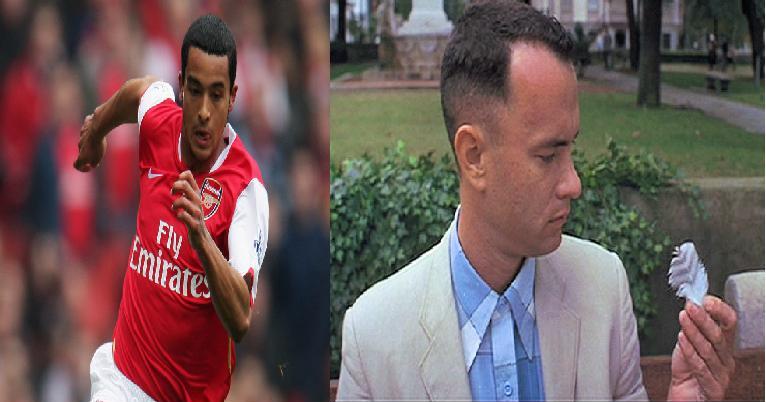 Many accuse Theo Walcott of "not having a football brain," but he sure can run faster than anyone else in the football world.

When thinking of "outrageously fast and brainless," one of the best films of all-time immediately comes to mind: 1994 Oscar-winner Forrest Gump.

Forrest posesses an IQ of 75 and shows incredible stupidity all throughout the movie, but running is definitely his forte. The line, "Run, Forrest, run," became a legendary movie quote. 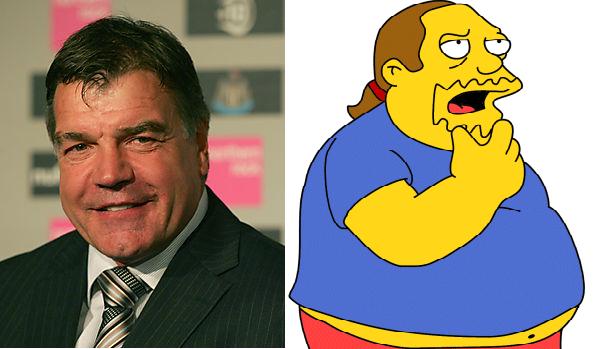 One wasted his entire life with comic books, the other wasted his career managing mediocre teams when he could easily have won everything with the likes of Inter Milan or Real Madrid (according to him). 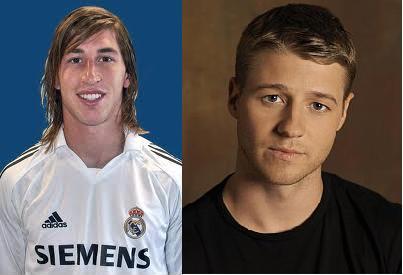 This might seem far-fetched, and rightfully so. How can Sergio Ramos resemble a character from The OC in any way? Well, he kind of does.

Ramos moved from Sevilla to European giants Real Madrid at the age of 19. Ryan Atwood moved from Chino (a very poor neighbourhood where he lived miserably) to Orange County (in the wealthy part of California) to live with a new family.

Both had problems with violence in the beginning of their "new lives." In fact, at only 24, Ramos has already broken the all-time red card record at Real Madrid! Both also calmed down eventually, despite Ramos' recent outburst at Camp Nou.

Finally, Ramos is known for racking up perhaps even more quality WAGs than his teammate Cristiano Ronaldo. Atwood is also pretty active on that department, so to say.

This is definitely not the most obvious comparison, but a possible one, as far as I'm concerned. 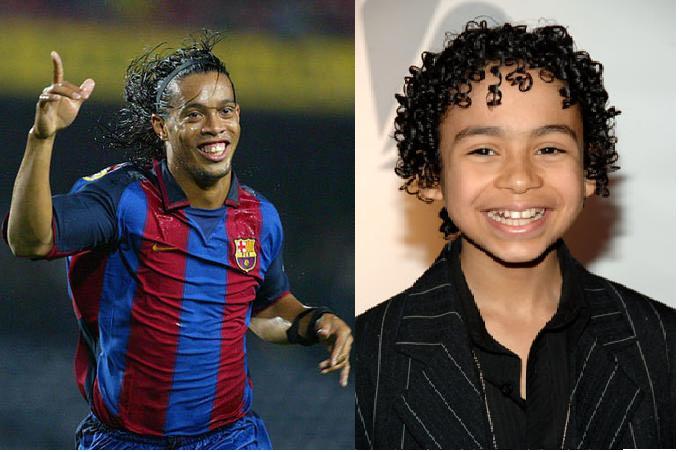 Micah's boyish smile is similar to that of Ronaldinho, during his golden years at Barcelona. While Micah is a genius, Ronaldinho used to being a genius with the ball on his feet.

While Heroes fans wished for Micah's return, when he stopped featuring regularly in the series, most football fans wish that Ronaldinho could return to his majestic best.

Another one with The Simpsons.

Arsène Wenger and Principal Skinner look freakishly alike. Not only in their appearance, but they are both strict disciplinarians in charge of a group of kids.

Both fail in their mission, though. While Principal Skinner can't discipline kids like Bart Simpson,  Wenger has been failing to deliver trophies since 2004, even if he has been pretty close at times.

That said, Wenger also possesses a characteristic from another character in The Simpsons: Nelson Muntz. Seriously, the French never laughs. Never! Just the occasional "ahah". 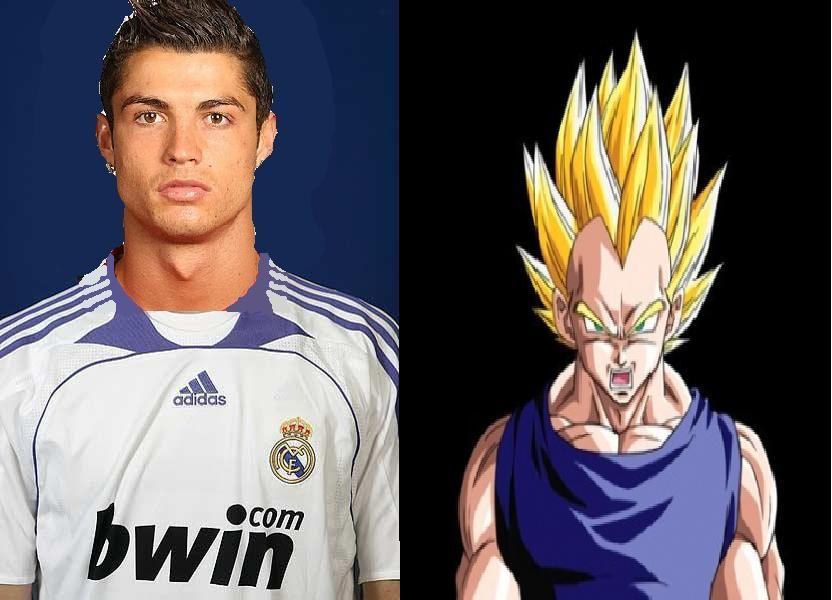 This comparison might not please some, namely those who grew up watching Dragon Ball. I mean, how can a Dragon Ball character be compared to Cristiano Ronaldo?

Well, Vegeta can. Greed, obsession with being the best/strongest, constant failure...sounds familiar? In the end though, Vegeta understands he can never be stronger than Goku, he overcomes the evil within him and becomes Goku's closest ally, in typical anime style.

Will Ronaldo come to terms with the fact that his dream of being the best football player of all-time will just never come true? 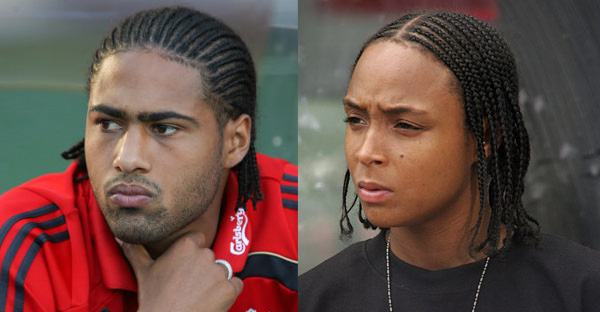 The face, the hair...it's impossible to deny Glen Johnson's resemblances with this female drug dealer and mass murderer from The Wire.

Stephen King described Snoop as, "Perhaps the most terrifying female villain to ever appear in a television series."

As for the Liverpool star, Johnson divides opinion in England, but many English fans share the very same fear whenever Johnson starts for the English National Team. 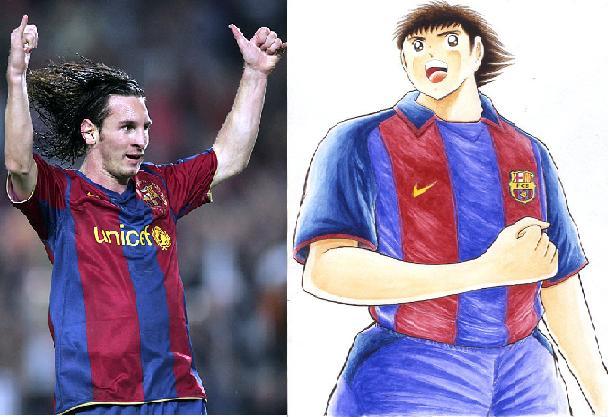 For the best player in the world, what better comparison than the best football anime of all-time?

Captain Tsubasa is basically the story of a 12-year-old kid, who was raised to be the best football player in the world. No matter how strong the challengers are, he always finds a way to beat them.

Coincidentially, in the end of the series, Tsubasa moves to FC Barcelona in his last step to become the world's best player.

Granted, Messi can only dream of doing the same things as Tsubasa. After all, it's a cartoon. 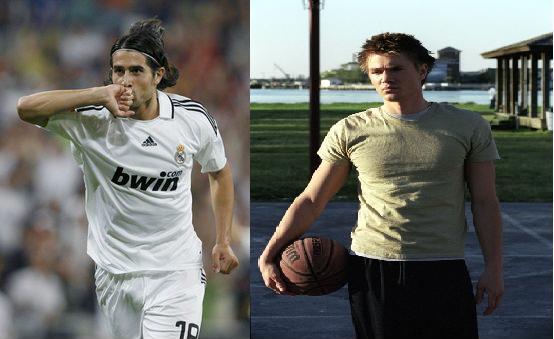 Their story is pretty much the same.

Ruben de la Red was a promising Real Madrid cantera product, but a serious heart condition forced him to stop playing for two years and eventually retire at 25-years-old.

Lucas Scott was a varsity basketball player in Tree Hill, with excellent prospects of making it to the NBA, but a serious heart condition has also forced him to give up the sport he loved. 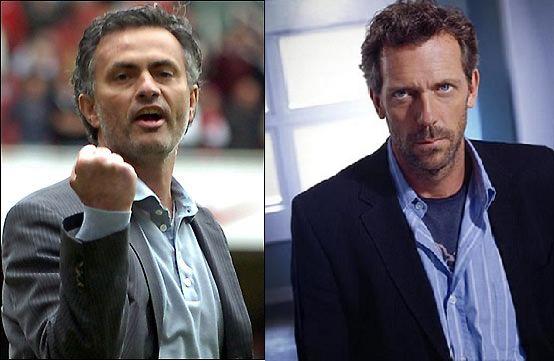 The one everyone loves to hate.

Both José Mourinho and Dr. Gregory House are incredibly arrogant and self-righteous.

They wouldn't win any popularity awards, but the quality they give in their respective fields is above any suspicion. José Mourinho keeps winning trophies to this very day, while Dr. House keeps getting each and every one of his diagnosis right.

They both believe that the end justifies the means, and they both disregard ethics more often that not, but their competence is unquestionable.

Peter Crouch and Abbey Clancy: Beauty and the Beast

This one requires no explanation.

Abbey Clancey will appear in every top WAG list, and how Peter Crouch managed to get her in the first place is a mystery to many. It's reminiscent of Disney's Beauty and The Beast. A fairytale, which the towering Englishman was almost ruined by having an affair...with a teenage prostitute.

Xavi Hernandez: Frodo Baggins (The Lord of the Rings) 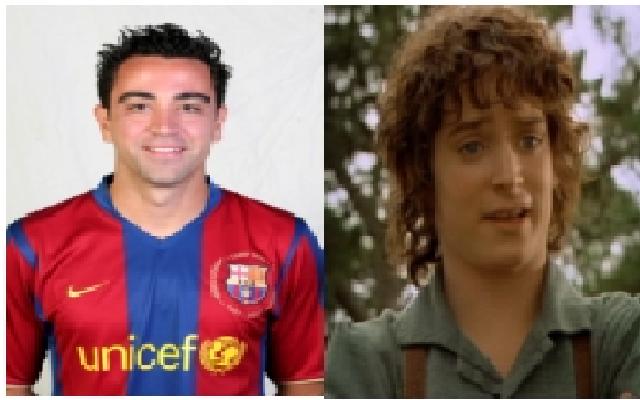 The Lord of the Rings, again.

Barcelona has been accused, by some rival fans and pundits, of resembling FC Hobbits. And rightfully so, as Barcelona probably has the smallest squad in Europe's top leagues.

But that's not necessarily a bad thing. Hobbits are beings of great worth and courage, and they did manage to accomplish their mission in the end.

If Barcelona are FC Hobbits, Xavi Hernandez must be Frodo.

It was Frodo's courage and leadership skills that led to the Ring to the fires of Mount Doom in the end, despite the lack of trust shown by some other members of the fellowship.

It is also Hernandez who, despite being underrated for most of his career, has been showing his worth by leading Barcelona to unprecedented success in the past few seasons.

Plus, there's some slight facial resemblances.

Manchester City: The Eye Of Sauron (The Lord of the Rings)

Manchester City have become "The Great Eye" of World Football.

They can "glance" anywhere and buy any big name player. All that's lacking from them is "The One Ring" (actual siverware) to gain credibility. 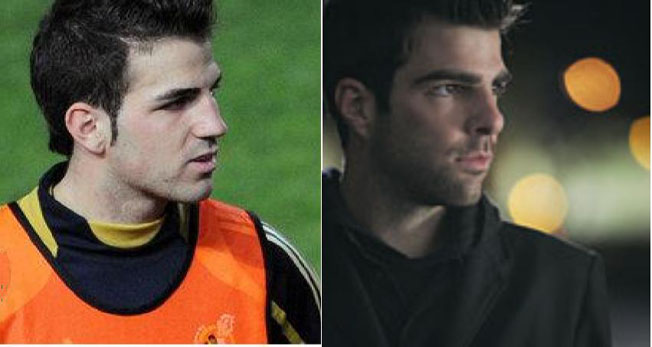 Who is who? The facial resemblances between the Arsenal star and the main villain from Heroes are scary.

Granted, Sylar intends to become the most powerful being on the planet and dominate it, while Cesc only wants to have a great career in football, but the physical resemblances are undeniable. 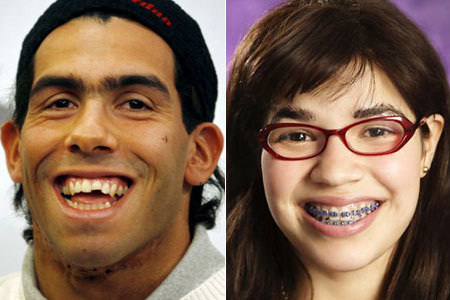 Again, the resemblances are only facial, but they're quite funny in this case. The similarities (see teeth) are extraordinary. 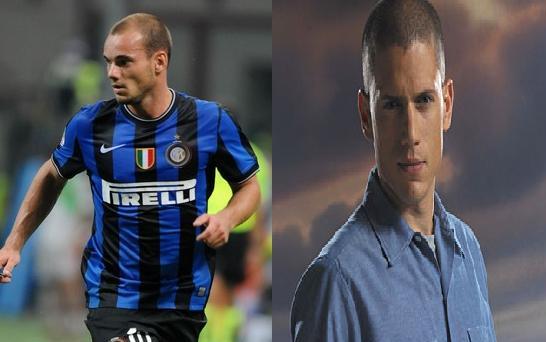 Again, the physical resemblances are undeniable.

Michael Scolfield was even more heroic though, by helping his innocent brother (and many others) escaping from a high-security prison in Prison Break. 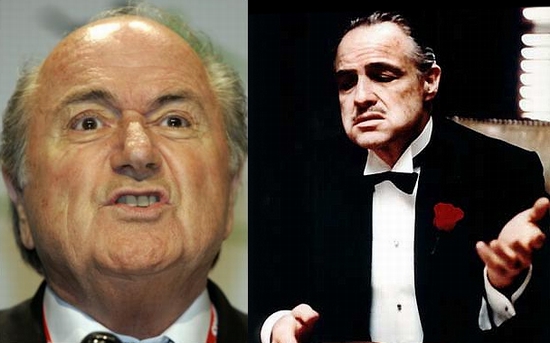 FIFA associated with the Mafia? No one could see this coming, I'm sure.

For some reason, a few select individuals believe that the big football organizations, namely FIFA, are corrupt. (Yes, I'm not kidding)

Sepp Blatter plays the role even better than Marlon Brando himself. Corruption in FIFA is no secret and too blatant to be ignored.

Will things get better after Blatter moves aside? Not likely. After all, Michael Corleone was even more evil than his father.