Oakland Raiders: Why They Can Run the Table and Get in the Playoffs 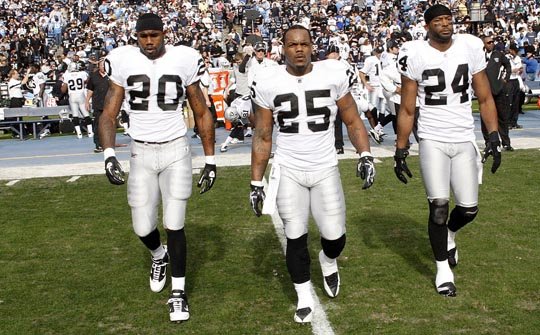 The Oakland Raiders just won their biggest game of the year against the San Diego Chargers. That puts them in second place in the AFC West along with the Chargers at 6-6.

The Kansas City Chiefs are two games up in first place in the AFC West with four games left. The mission is still possible for the Raiders to win the division because their schedule isn't too bad and they have a game left against the Chiefs.

The Chargers are in position to help out and beat the Chiefs this coming Sunday. Philip Rivers and company will be up for the task as they still have hope to win the AFC crown themselves.

If the Chargers beat the Chiefs this Sunday, the week 17 game between the Raiders and Chiefs will mean everything just like old times. A Raider win at that point will force a first place tie that goes to the Raiders because of their division record.

Turn the page to see why the Raiders can run the table including the Chiefs in week 17. 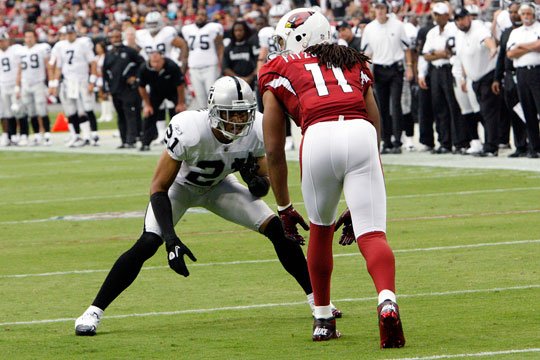 If the Raiders were any other team, the everyone would be saying that they're getting healthy at the right time. But only those that know Raiders know that's really the case and Nnamdi Asomugha is a big part of it.

So I now trust him to shut down the opponent's best receiver down the stretch.

This and the Raider pass rush will make it all the less possible to throw on them. 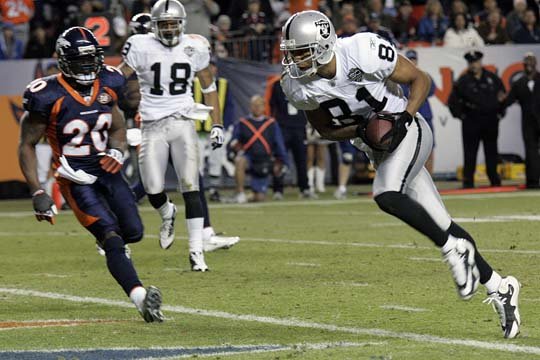 Chaz Shilens is the Raider's most consistent receiver the Raiders have on their roster. Unfortunately, he has been hurt all season so he could do nothing to help the Raider passing game.

The 6'4, 225 pound receiver has blazing speed just like the rest of the Raider receivers. But one thing Schilens has to set him apart from the rest is the ability to go over the middle and catch the ball in traffic.

He also consistently catches everything thrown near him no matter how tough the catch is. He even made Jamarcus Russell look like he was going to be okay as the Raider's franchise quarterback at the end of 2008.

Schilens will especially do wonders for Jason Campbell.

He will also open up things for another Raider that's getting healthy. 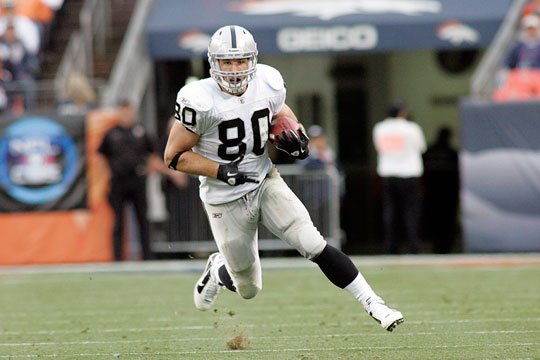 Zach Miller is the most consistent offensive weapon the Raiders have had since he was drafted in 2007. He has missed some time and been slowed down by plantar fasciitus but he is reportedly getting better every day.

Schilens back in the lineup will take double teams away from Miller on third down as he gets healthy. Third and seven will no longer seem like a mile for the Raiders with their possession receivers in play.

Look for Miller to return to form down the stretch. 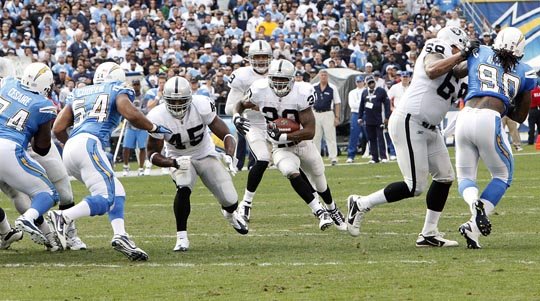 Since missing a couple of games with a pulled hamstring earlier this season, Darren McFadden has proven that he can take the pounding of an NFL running back. He has also taken his place among the elite running backs in the league and should go over the 1,000 yard mark soon.

What the Raiders do to get the ball in McFadden's hands down the stretch will determine the outcome of this season. He can be used in the running game and the passing game so there's no reason not to get him touches.

That's the kind of impact a former top 10 pick is supposed to have. 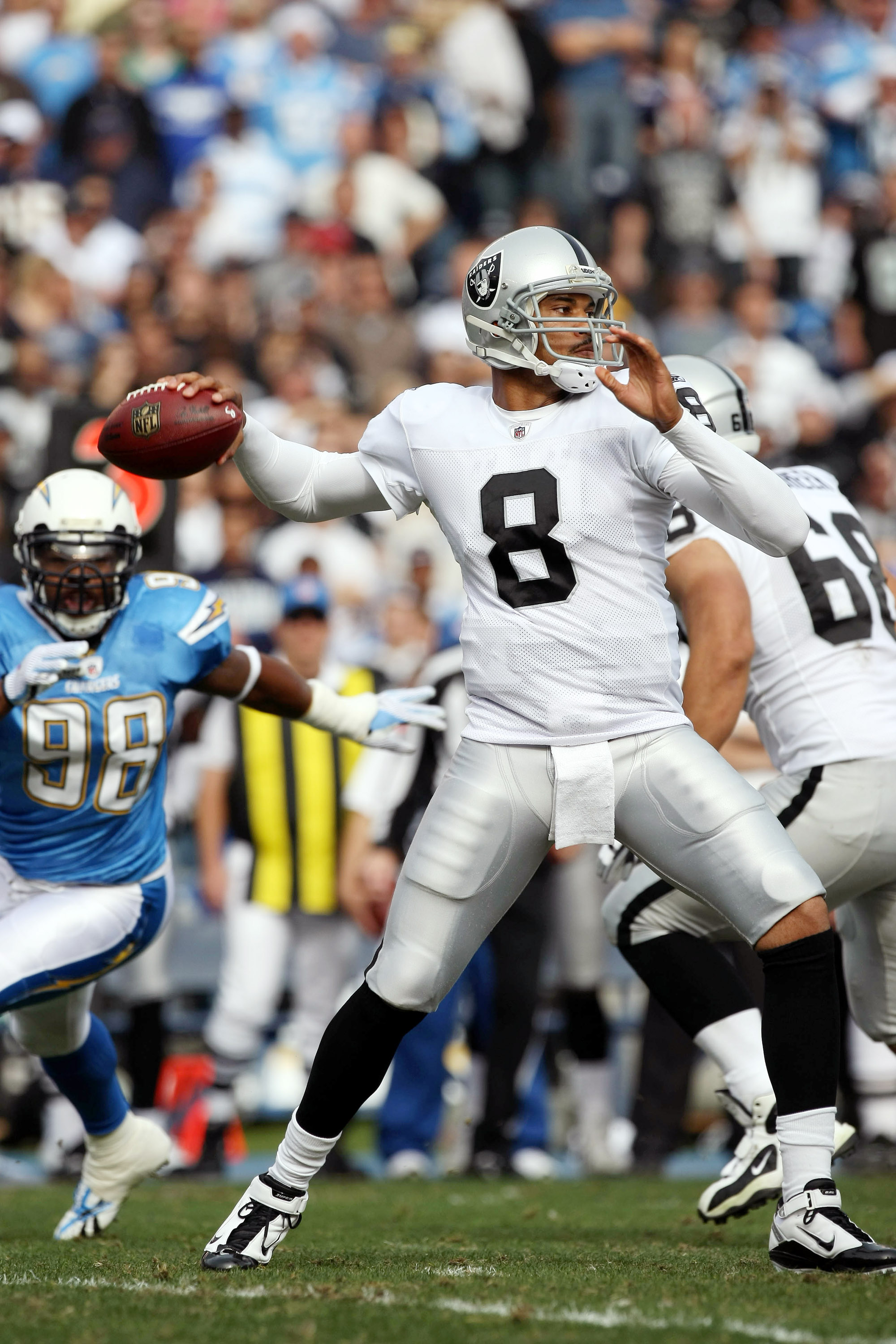 They say that competition within a team brings out the best football players.

Not at quarterback when the season has already started.

Jason Campbell plays his best football when he knows that he's the guy to lead the Raiders. He's 5-0 with an average quarterback rating of 109 in games that Bruce Gradkowski is definitely out with an injury.

Some could say, "He has to be tough and overcome that. That's what great players do"

Jim Brown is the best football player in the history of the game. When Brown spoke of his being selected by the Browns he said, "Paul must have known a little bit about me. When I went to Cleveland he told me that I was his man and I would then do the rest of the work."

Even a great player wants to know that he's the guy and doesn't have to look over his shoulder after any mistake. The result of Gradkowski's last injury is Campbell playing confidently and effectively in a win against the Chargers.

Campbell can now, "cut it loose" and be the Raider's quarterback.

Rolando McClain: Growing Into His Role 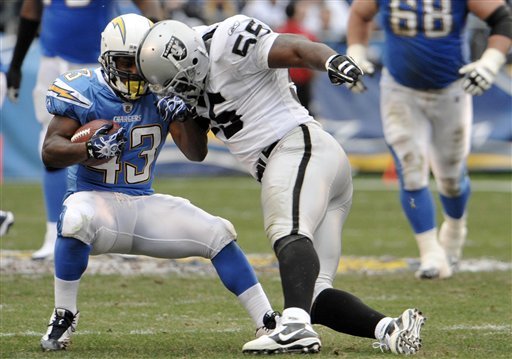 Rookie middle linebacker Rolando McClain is starting to become a play making middle linebacker. Now that he is used to the speed of the NFL game he is more instinctive and figures things out much quicker.

You can even tell that he has grown into his role as a leader of the Raider defense as he makes more plays. He is more the just a "director" as a middle linebacker as Deion Sanders would say.

McClain also leads by setting the tone in big games with his ferocious hits. The result of that on Sunday wasn't pretty on Sunday for Darren Sproles of the Chargers.

Sproles was knocked out of the game with a concussion.

The Raiders can use more plays like that down the stretch. (minus the concussions) 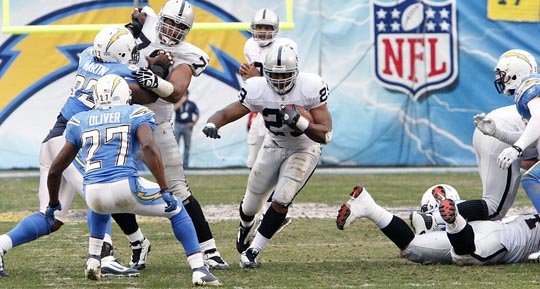 He started off the season with a broken hand and was forgotten a bit with McFadden's breakout season. But Michael Bush is a very necessary part of the running game with the Raiders.

He is money on short short yardage situations and near the goal line.

He can also kill the clock for you to end the game when you have the lead. But don't think for a second the Bush can't break one on you too.

Bush and McFadden together can really wear a defense down as they did the Chargers Sunday.

Mike Mitchell: Getting On The Field More 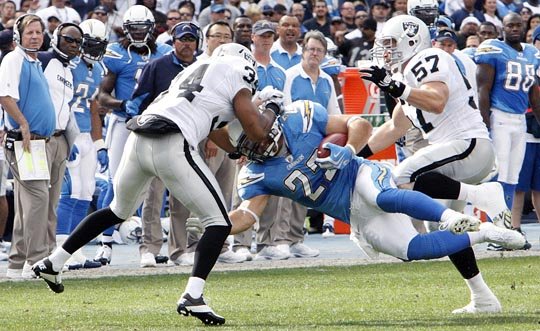 Mike Mitchell has played his way into more playing time in the Raider secondary. Injuries at the corner position have taken Michael Huff  out there on occasion and left Mitchell to play free safety.

He's even played some strong safety in place of the injured Tyvon Branch. Mitchell has made the most of his time with bone jarring hits and his improved coverage.

Those hits are where is value is as they create momentum for the Raiders. His hitting and tackling can also stop a big play from getting bigger as he represents the last line of defense.

Mitchell deserves to start as other plans can be made for Huff. 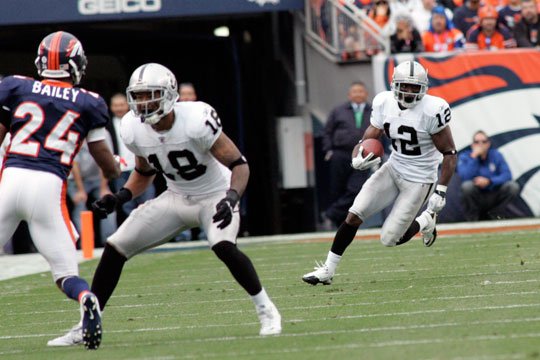 Jacoby Ford is another one of those world class sprinters on the Raider roster. He's also proving himself to be a big time weapon on the team.

Ford has three touchdowns in the last two games and has shown versatility aside from his return skills this year. Against the Chiefs, Ford showed himself to be a vertical threat that can adjust to the ball.

In the Miami game, Ford showed his ability to run after the catch with a 44-yard touchdown. Then last Sunday in San Diego, Ford showed himself to be a weapon in the red zone.

It will be exciting to see what Ford can do with Schilens, Murphy, and Miller. I do have to mention his two returns for touchdowns because those are the types of plays that change game.

He just makes this team better. 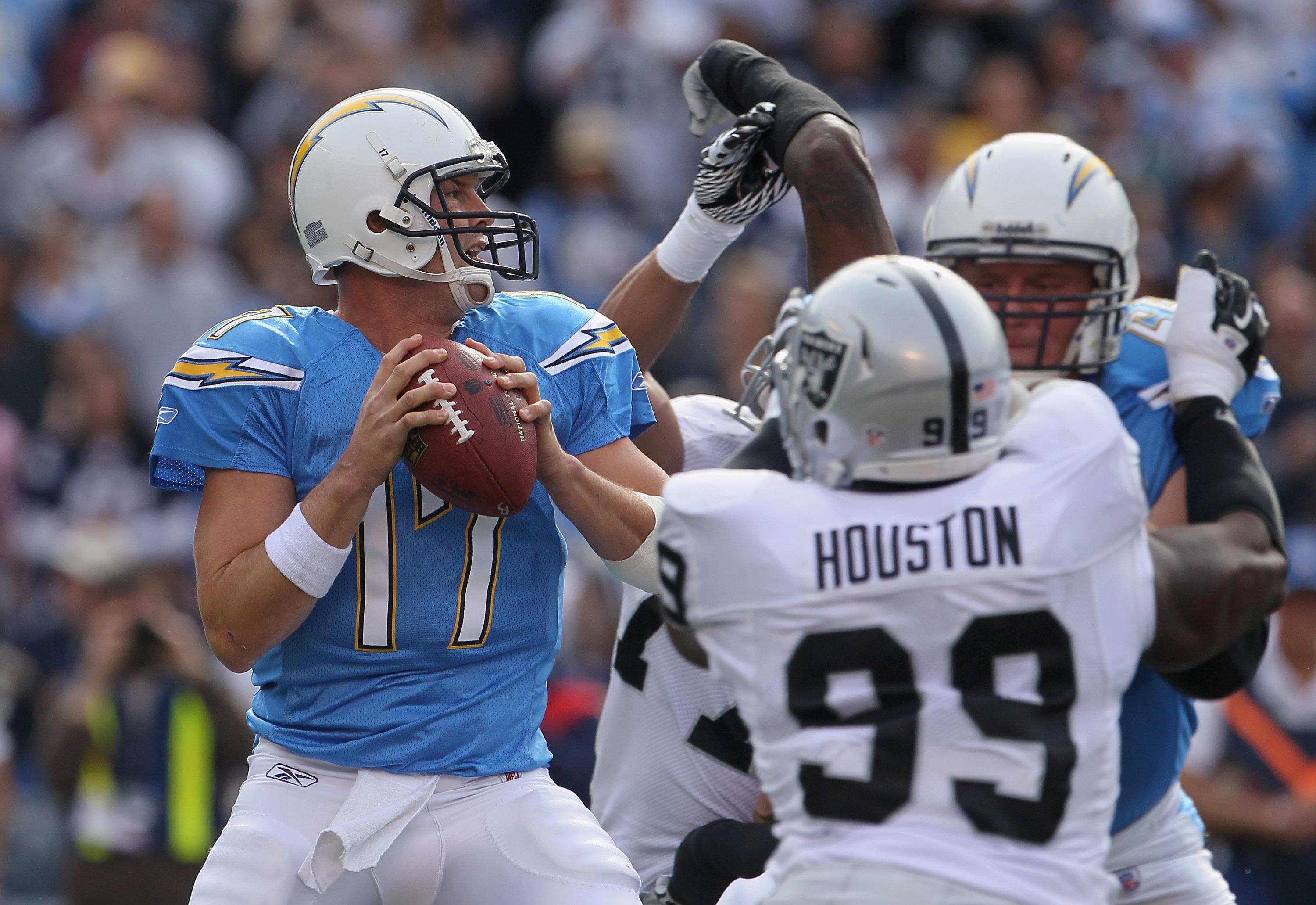 Lamarr Houston is really starting to get it at defensive end coming down the home stretch of the season. He showed last Sunday that he has it at defensive tackle as he was pressed into some duty there due to Richard Seymour not being 100 percent.

His sack and his tackle behind the line of scrimmage on third and short are the type of plays the Raiders need. Houston has played hard all year but is just now starting to wow Raider Nation.

They say that a rookie is no longer a rookie after week 10.

So that means he now has the experience to keep his play making ways up. 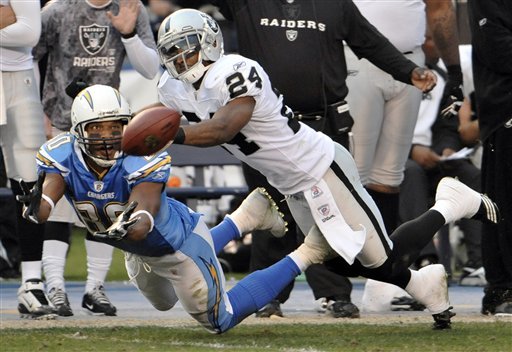 From the very beginning, I have always thought that Huff should be moved to corner. I questioned his ability to make plays and be physical enough to play safety.

While he's proven me wrong and improved immensely as a free safety, he has proven me right as a corner. Every since the injury to Chris Johnson, Huff has been pressed into more duty as a corner.

In that time, he has shown himself to be the second best corner on the team behind Asomugha. Opposing quarterbacks have had their way throwing at Stanford Routt and Johnson all year.

The move would get the best 11 on the Raider defense on the field. 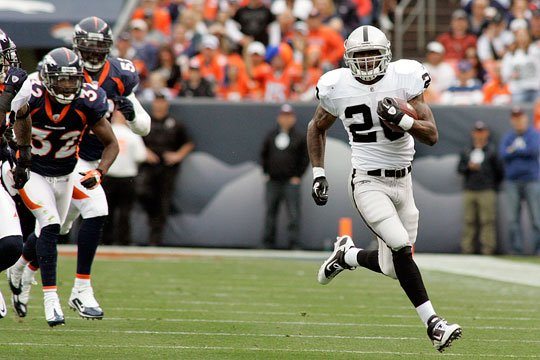 The big, physical teams on defense are the teams that the Raiders struggle mightily against. The Raiders don't have such a team on the schedule for the last four games of the season.

The Jaguars are physical on offense but not defense this year as they are No. 17 against the run.

The Broncos are No. 31 against the run.

The Colts are No.29 against the run.

The Chiefs are No. 12 against the run but Raiders did move the ball on the ground effectively against them.

This means that the Raiders will be able to be who they are for the last four games. The undersized Samson Satele and Cooper Carlisle shouldn't hurt the Raider running game against these teams.

That gives them a good chance to win them all. 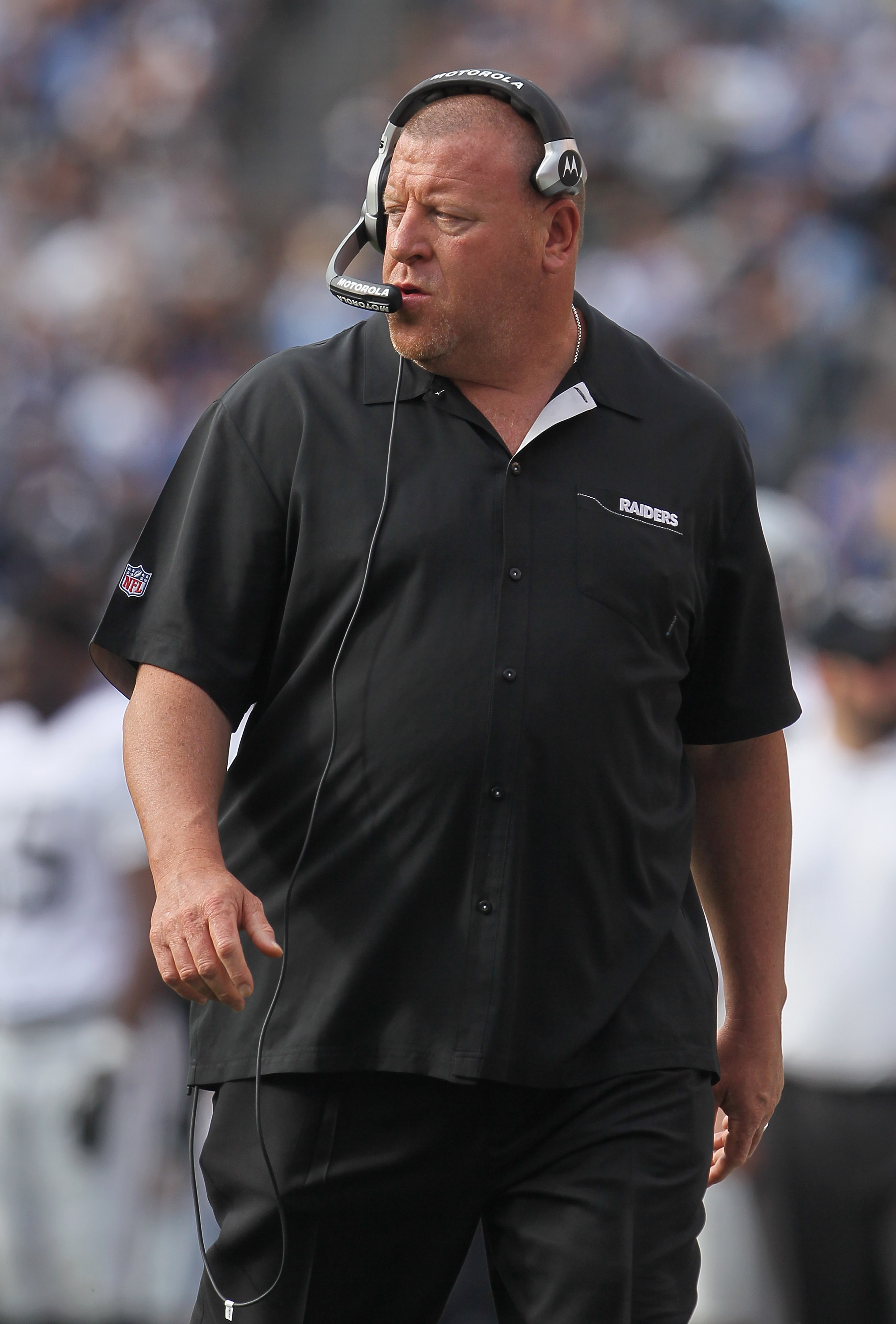 The Oakland Raiders have a better chance to make the playoffs than people think. They have some key players getting healthy and young ones emerging so it will be exciting to see what they will do with it.

I'm not making any predictions but this article is an illustration of just how good of a chance they have. If your average Raider fan was asked if they would take being in this position before the season, they would.

If the Raiders do falter and don't make the playoffs this year, it will give them the fuel to get there next year. Either way, this is another turning point in the rich history of Silver and Black football.

But it is still possible for the Raiders this year.

Hope is alive in Raider Nation.