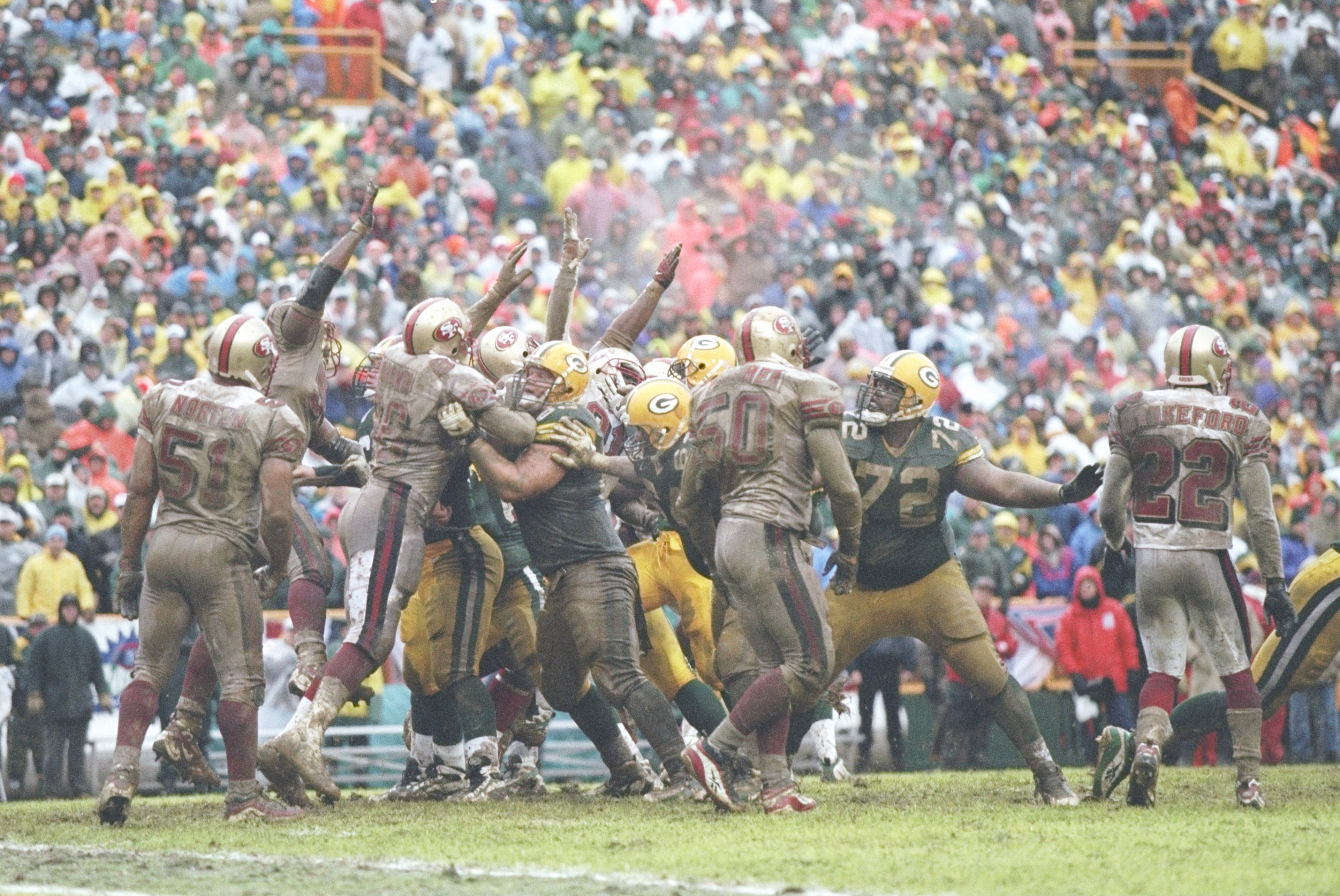 A handful of the Green Bay Packers most memorable moments have occurred against the San Francisco 49ers.  Every season, from 1995 to 1998, these two franchises met in the playoffs.  It’s within those years that I believe the five most memorable Packers/49ers games occurred. 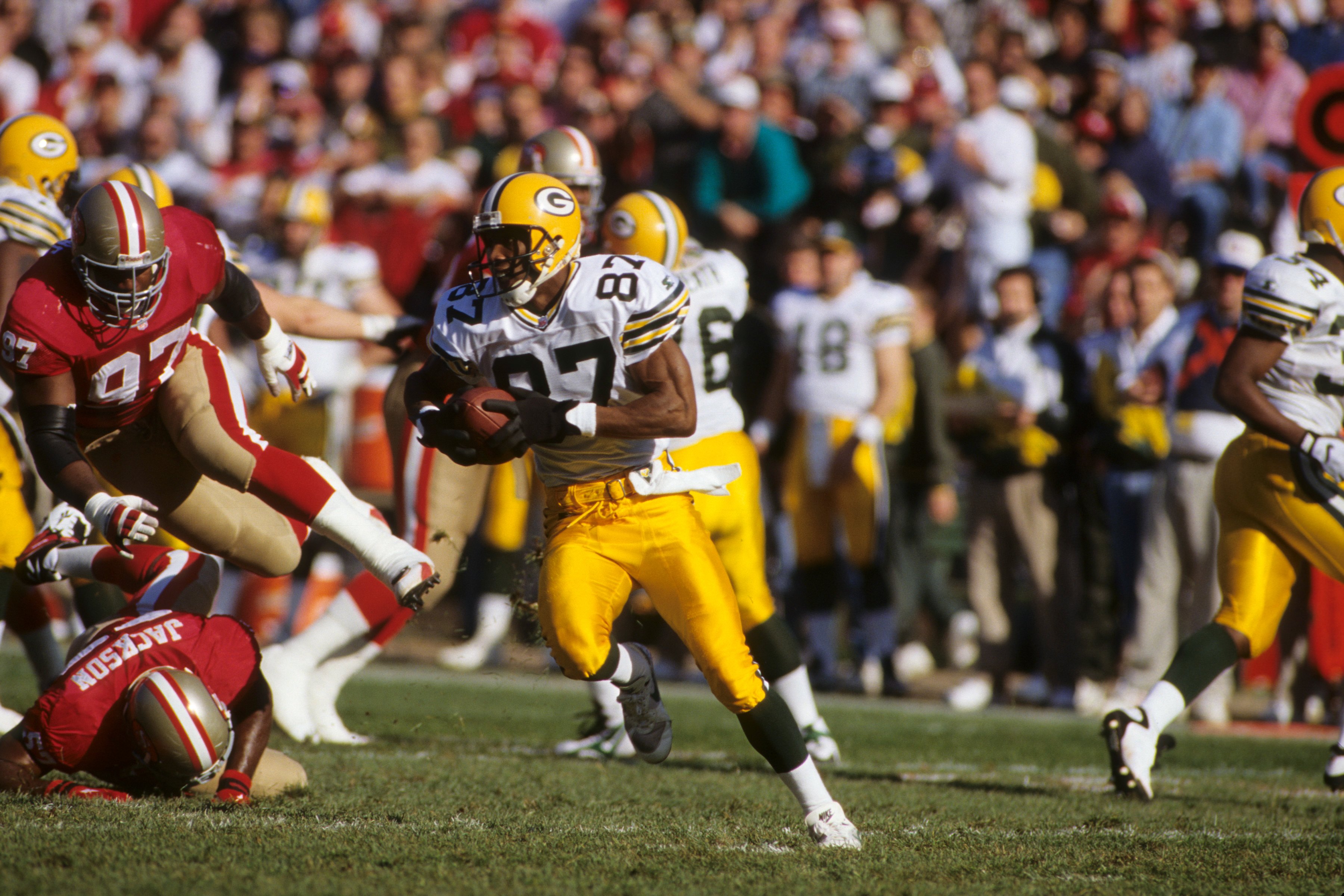 The 49ers had dreams of repeating as Super Bowl champions, but they clearly were not prepared to play the Packers.  The Packers took a 21-0 lead early in the game, and never let go.  The victory sent the Packers to the NFC Championship game, at the time their deepest trip into the playoffs since 1967.  The 49ers had more first downs, and yards than the Packers, but four turnovers proved costly.

Most forgotten stat in the game was that 49ers QB Steve Young tossed the ball 65 times, which is the NFL record for pass attempts in a playoff game. 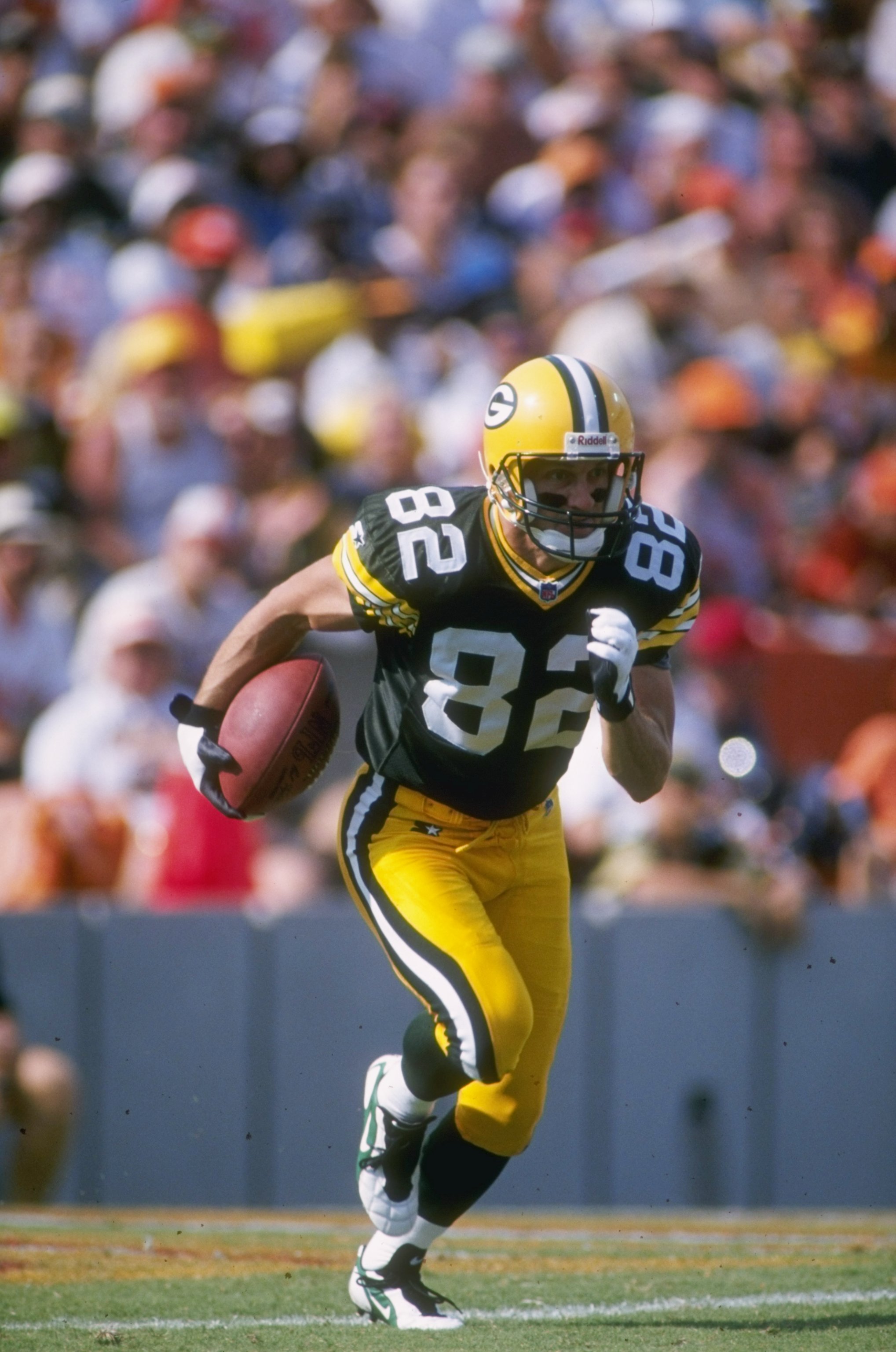 In one of the most anticipated games of the regular season, the 49ers (4-1) traveled to Lambeau Field to face the Packers (5-1) on Monday Night Football.  Under the guidance of Elvis Grbac, the 49ers went into halftime with a 17-6 lead.  However the Packers fought back, and a 31-yard field goal by Chris Jacke with a little over three minutes left in the game, tied everything up at 20.

In overtime, Chris Jacke hit his fifth field goal of the game from 53 yards out, and the Packers defeated the 49ers, 23-20.

You can't say it was the prettiest of wins by the Packers.  The only touchdown the Packers scored came off of a 59-yard touchdown reception by Don Beebe.  Going up for a pass, Beebe fell to the turf as he caught the ball.  Believing he was untouched, Beebe stood right up and ran the ball in for a touchdown.

Beebe clearly made the circus catch, but the replays showed that Beebe had been tapped by the 49ers Marquez Pope before getting off the turf.  The play should have been brought back, but instant replay didn't exist in the rules back then, and the touchdown stood.

A notable statistic from the game, was Brett Favre's team record 61 passes.  Don Beebe (pictured) caught 11 of those passes for 220 yards, for the most yards by a Packers receiver since 1957. 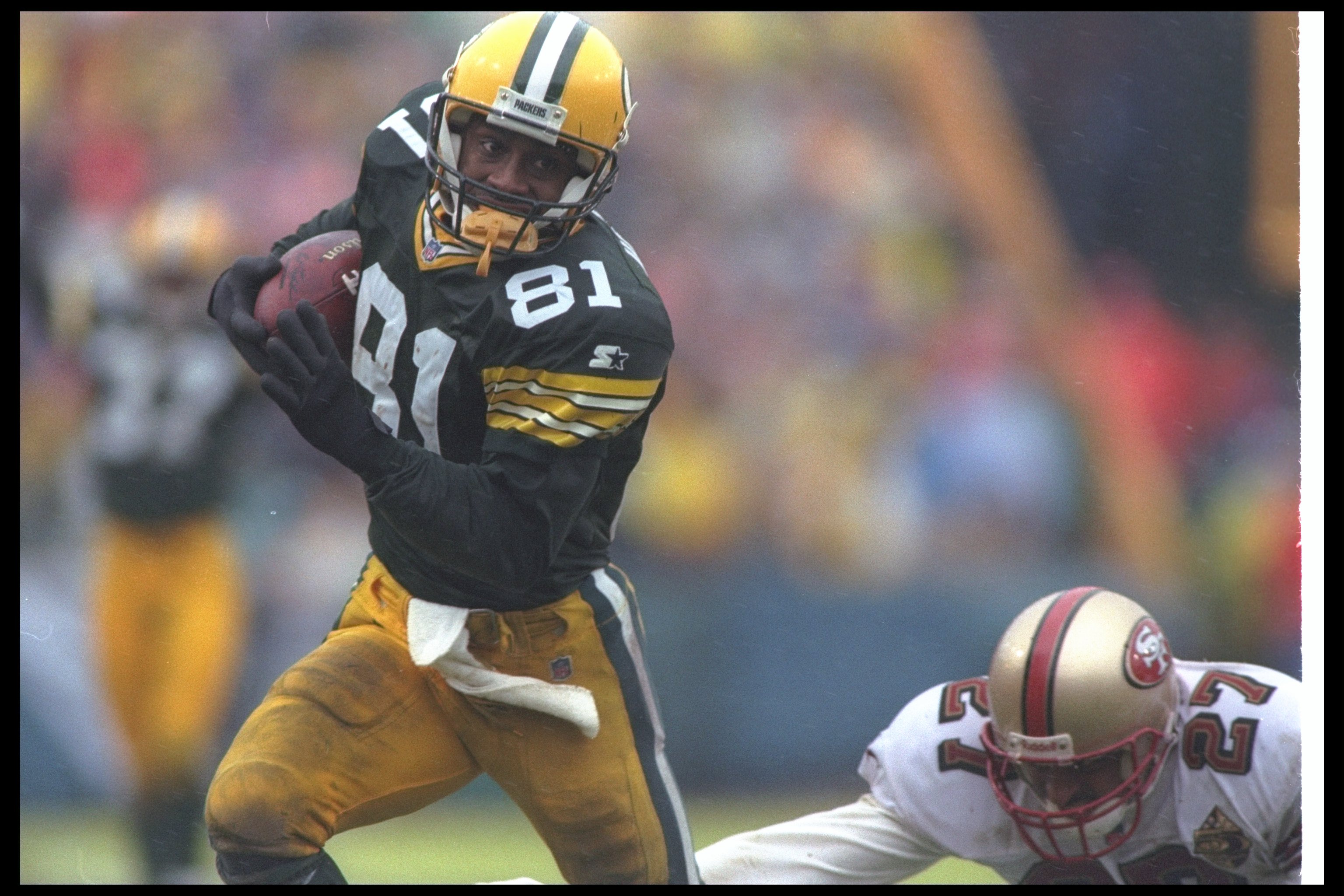 The Packers had only 210 total yards, but still managed to score 35 points.  This is because the 49ers had five turnovers, and were unable to stop Desmond Howard early on.  On the muddy turf of Lambeau Field, Howard returned the 49ers first punt for a touchdown, and later in the first quarter setup another Packers touchdown with a 46-yard punt return.

Brett Favre threw for only 76 yards, but when your defense and special teams is taking over the game, you don’t have to rely on your QB.  With the victory, the Packers were setup to host their first-ever NFC Championship game. 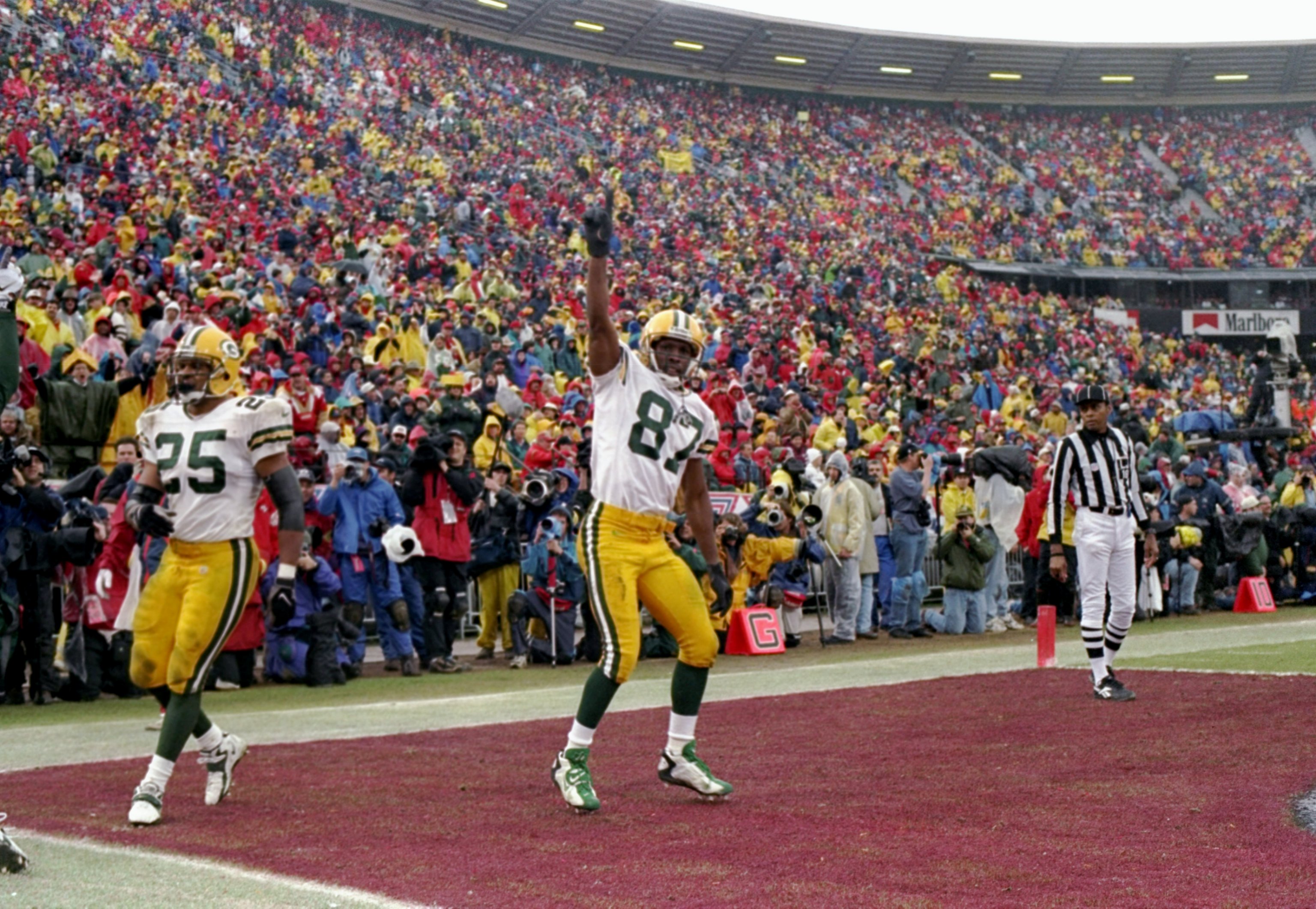 A soggy field in San Francisco limited offensive production, but the Packers were able to manage the conditions, and win their second consecutive NFC title.  The Packers gained 68 more total yards than the 49ers, and more importantly they didn’t turnover the ball.

Brett Favre threw for 222 yards, and one touchdown.  Dorsey Levens ran for 114 yards on 27 carries.  The game is simply memorable because of its significance.  The Packers victory sent them to the Super Bowl. 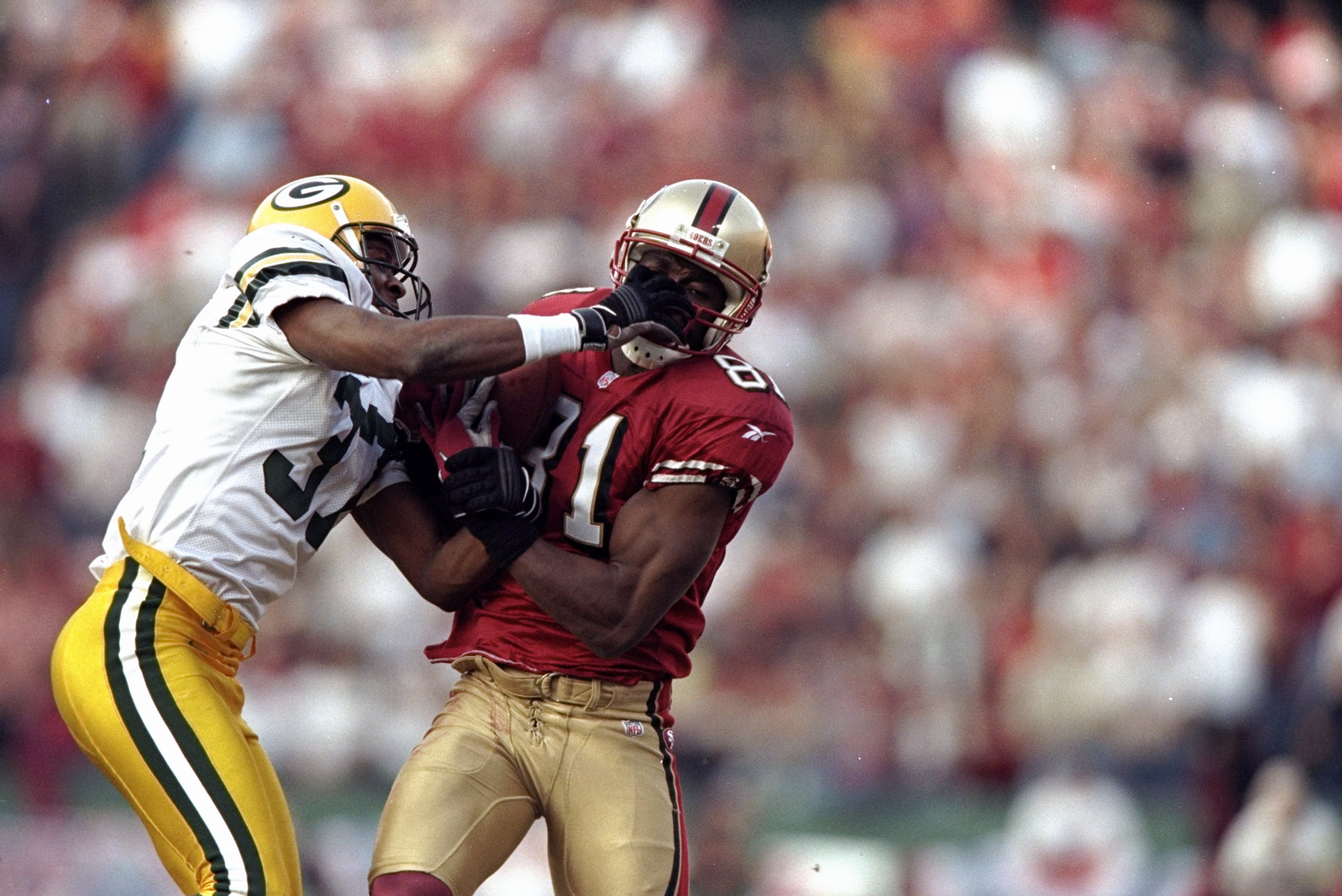 This game marked the end of an era in Green Bay.  A year after the game, Mike Holmgren was in Seattle, Reggie White was retired and for the first time since 1992, the Packers missed the playoffs.

Of course, the game will always be remembered for the play at the end.  That play was Steve Young’s last-second game-winning 25-yard touchdown pass to Terrell Owens, a pass Young somehow managed to thread between the Packers tight pass coverage.

Secondary to that play in importance, was a play that occurred earlier on the same drive.  At the tail-end of Jerry Rice’s first catch of the game, Rice lost control of the ball. The refs ruled that Rice was down before he fumbled the ball.   Replays showed otherwise, but without the benefit of instant replay, there was no way to reverse the ruling on the field.

Nonetheless, the Packers can’t say that one specific play was the reason why they lost the game. Uncharacteristically against the 49ers, the Packers lost the turnover battle, and they didn’t take advantage of opportunities.  Often forgotten is that Craig Newsome nearly snagged a game-sealing interception for the Packers, right before the 49ers game-winning touchdown.  A Packers victory just wasn’t in the cards.