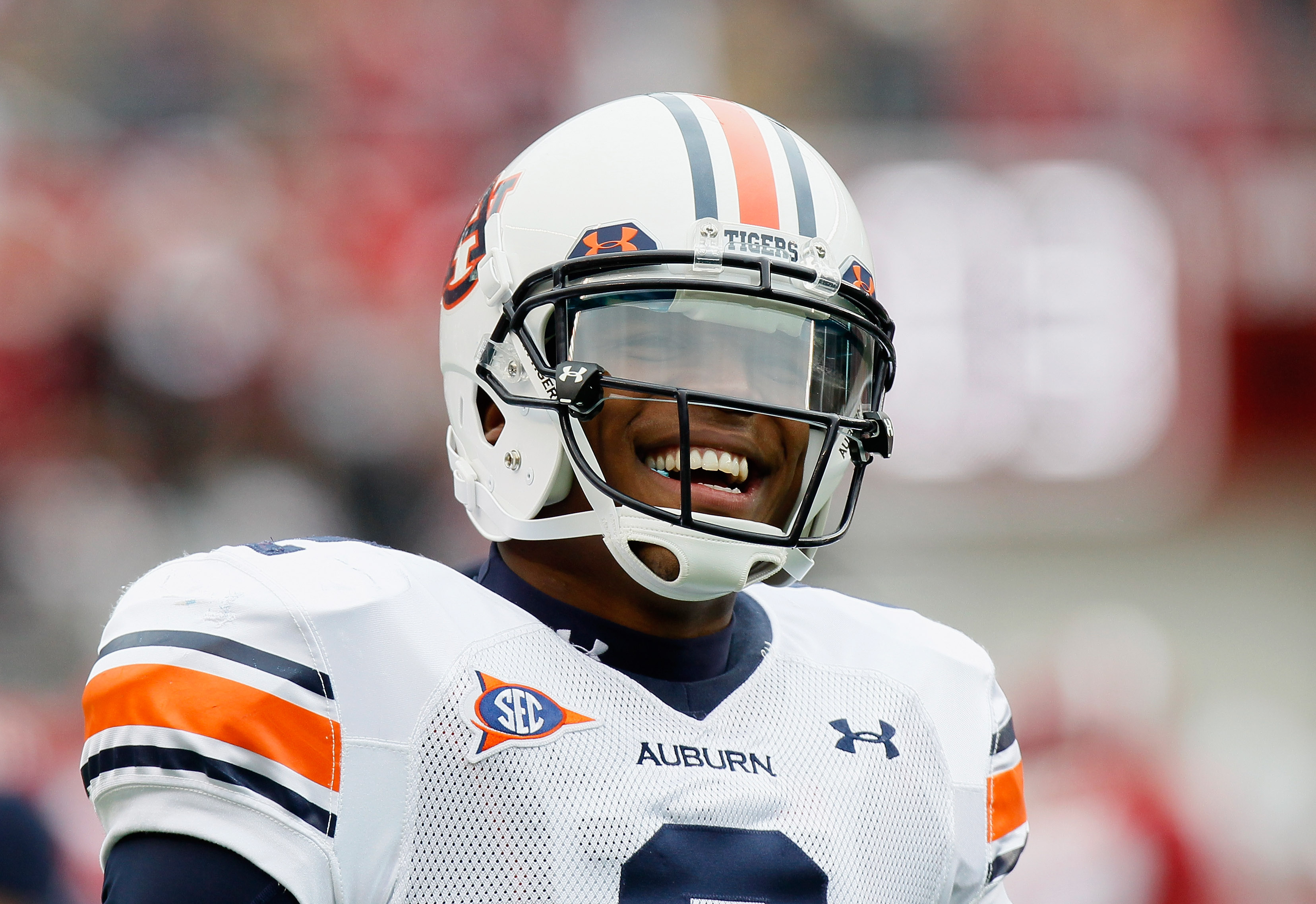 Cam Newton and the Auburn Tigers just pulled off one of the most stunning comebacks in college football history in today's Iron Bowl. On the road, no less.

So with absolutely no reservations, we can honestly say that Auburn's comeback should already be counted among the all time greats.

But of course, what are the other all time greats? 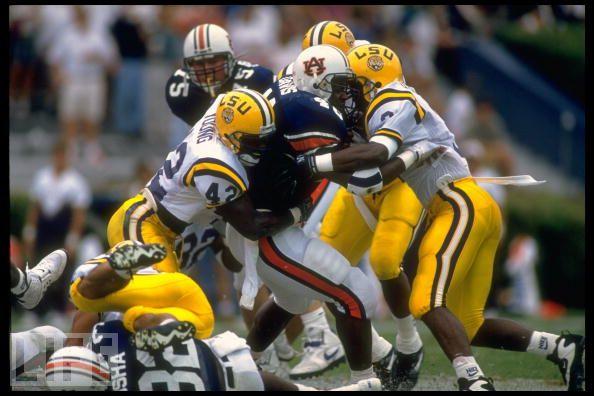 Auburn has another great comeback to its name in recent years, as they pulled off a good one against SEC rival LSU in 1994.

The Tigers (of Auburn, of course) trailed 23-9 entering the fourth quarter and were simply unable to move the ball on offense.

But LSU quarterback Jamie Howard helped them out. He threw five picks in the fourth quarter, three of which were returned for touchdowns, and Auburn won 30-26.

The legend is that Howard received death threats after the game. 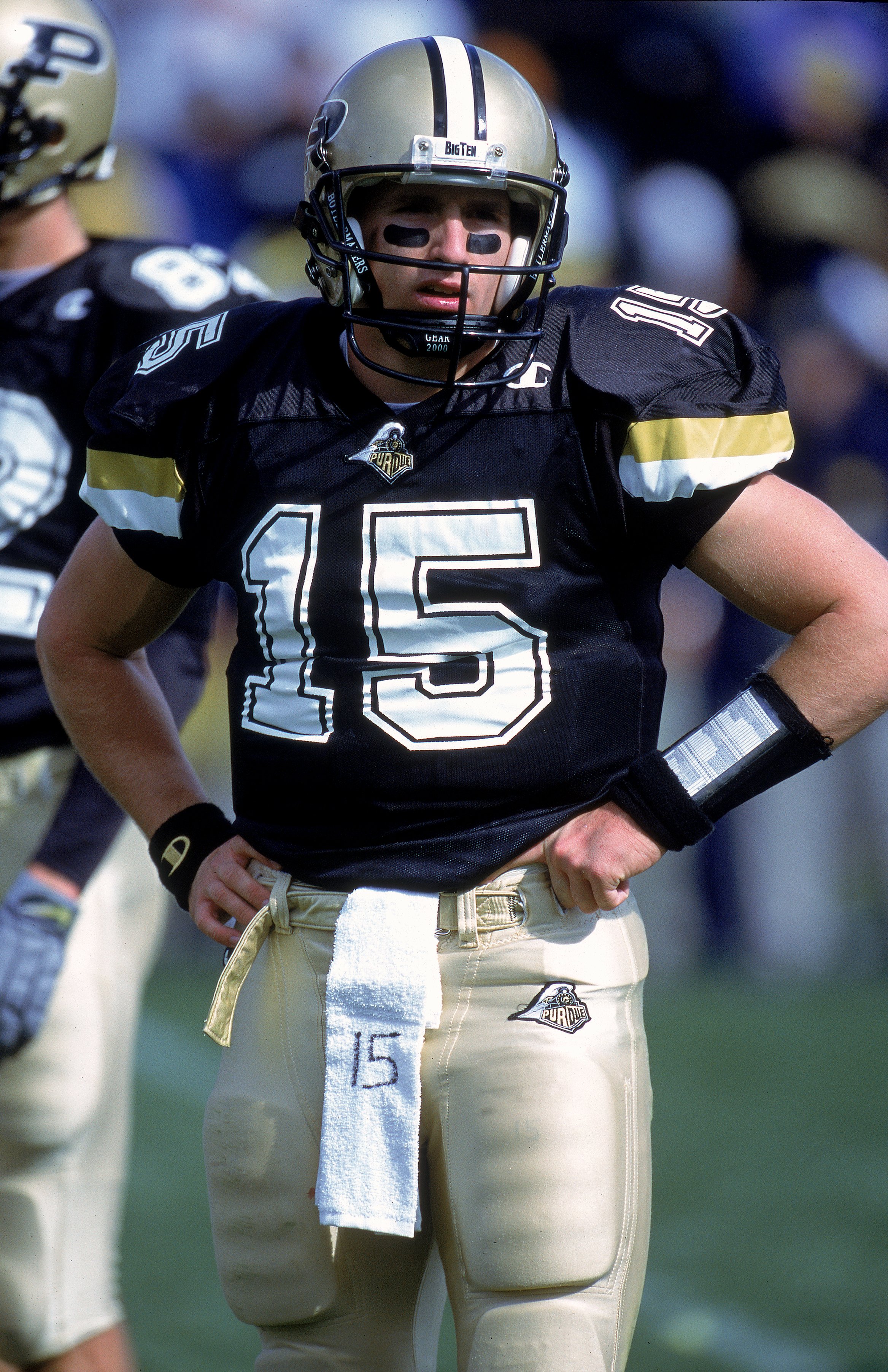 In the 2000 Outback Bowl, the Georgia Bulldogs trailed Drew Brees and the Purdue Boilermakers by a score of 25-0 midway through the second quarter.

The Bulldogs cut the score to 25-10 by halftime and then scored 15 unanswered points in the second half, tying the game on a touchdown pass to Randy McMichael.

The Bulldogs would get a field goal in overtime and would win the game 28-25.

It is one of the largest comebacks in bowl history. 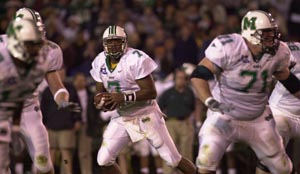 Marshall trailed East Carolina 38-8 at halftime in the 2001 GMAC Bowl but proceeded to pull off one of the biggest comebacks in bowl history.

Marshall's offense exploded for 43 second half points, forcing overtime with a 51-51 tie.

At the time, the 30-point deficit was the largest ever overcome in a bowl game. 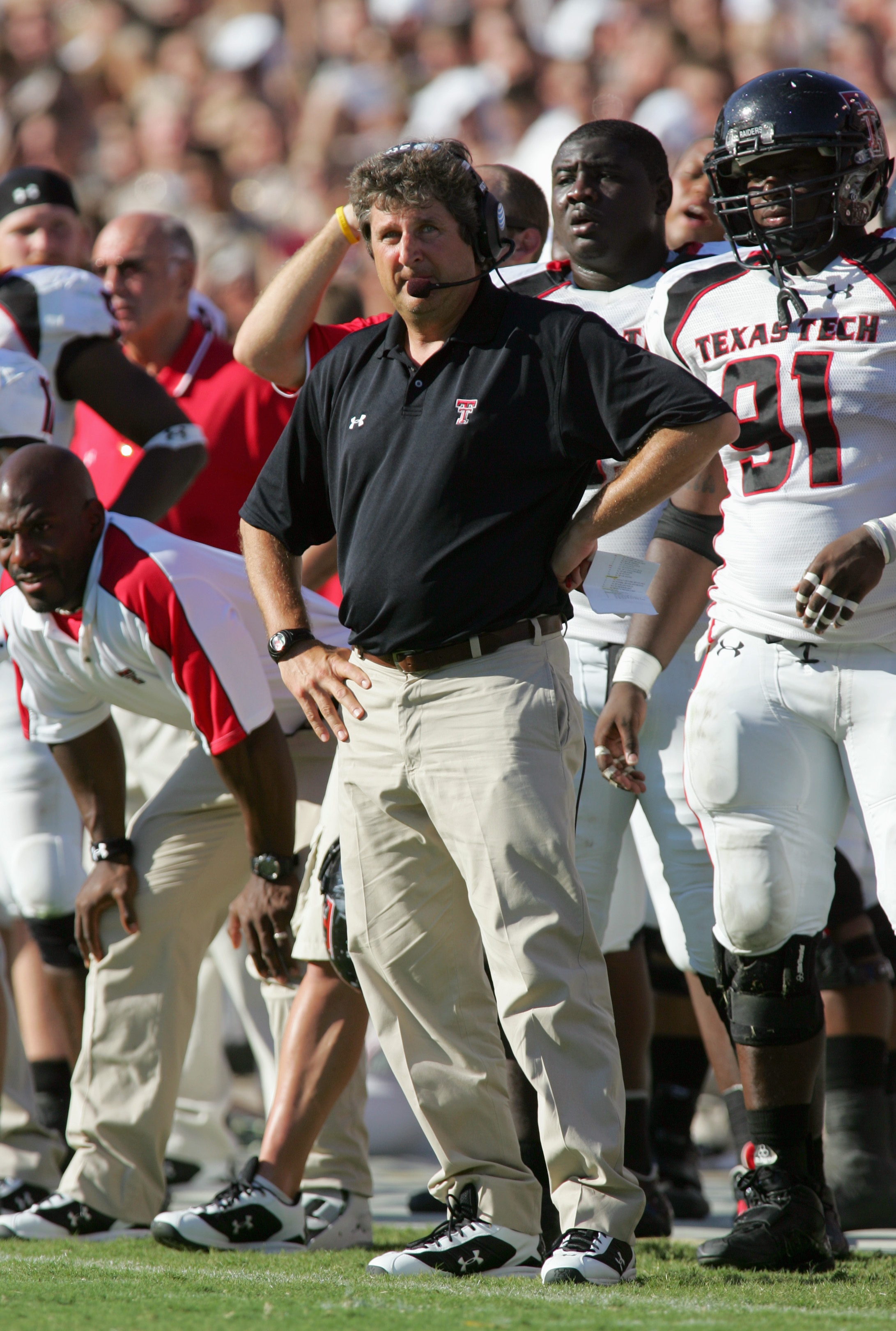 The Texas Tech Red Raiders met the Minnesota Golden Gophers in the 2006 Insight Bowl, and it ended up being quite the bowl game.

Texas Tech trailed 38-7 midway through the third quarter and then scored 31 unanswered points to force overtime.

In overtime, the Red Raiders held Minnesota to a field goal and then won the game on a touchdown run by Shannon Woods. They won 44-41.

It is the largest comeback ever in a bowl game. 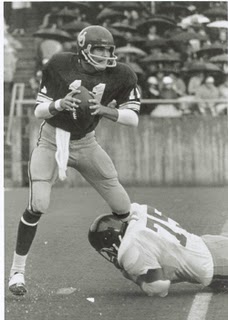 The 1970 matchup featuring the UCLA Bruins and Oregon Ducks ultimately ended with a furious comeback by the Ducks in the final minutes.

The Bruins led the game 40-21 with just over four minutes remaining, and the Ducks were forced to pull Dan Fouts in favor of Tom Blanchard. He threw a touchdown pass to make it 40-28 with four minutes to play.

UCLA put in its backups and promptly fumbled the ball back to the Ducks. They scored another touchdown to make it 40-35.

Oregon recovered the onside kick and had two minutes to complete the comeback. Fouts came back in the game and completed a touchdown pass on 3rd-and-14 to give the Ducks a 41-40 lead with 30 seconds to play. 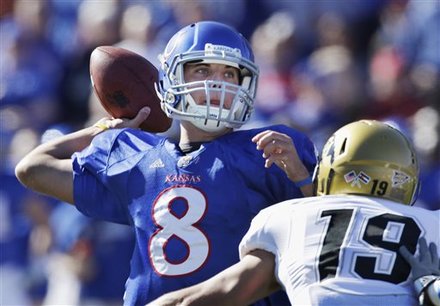 The Colorado Buffaloes went into Kansas and dominated the Jayhawks through the first three quarters, as well as the first play of the fourth quarter.

But the Jayhawks would proceed to score 35 unanswered points, thanks in large part to three rushing touchdowns by James Sims and won the game 52-45.

It is now the largest fourth quarter comeback in NCAA history. 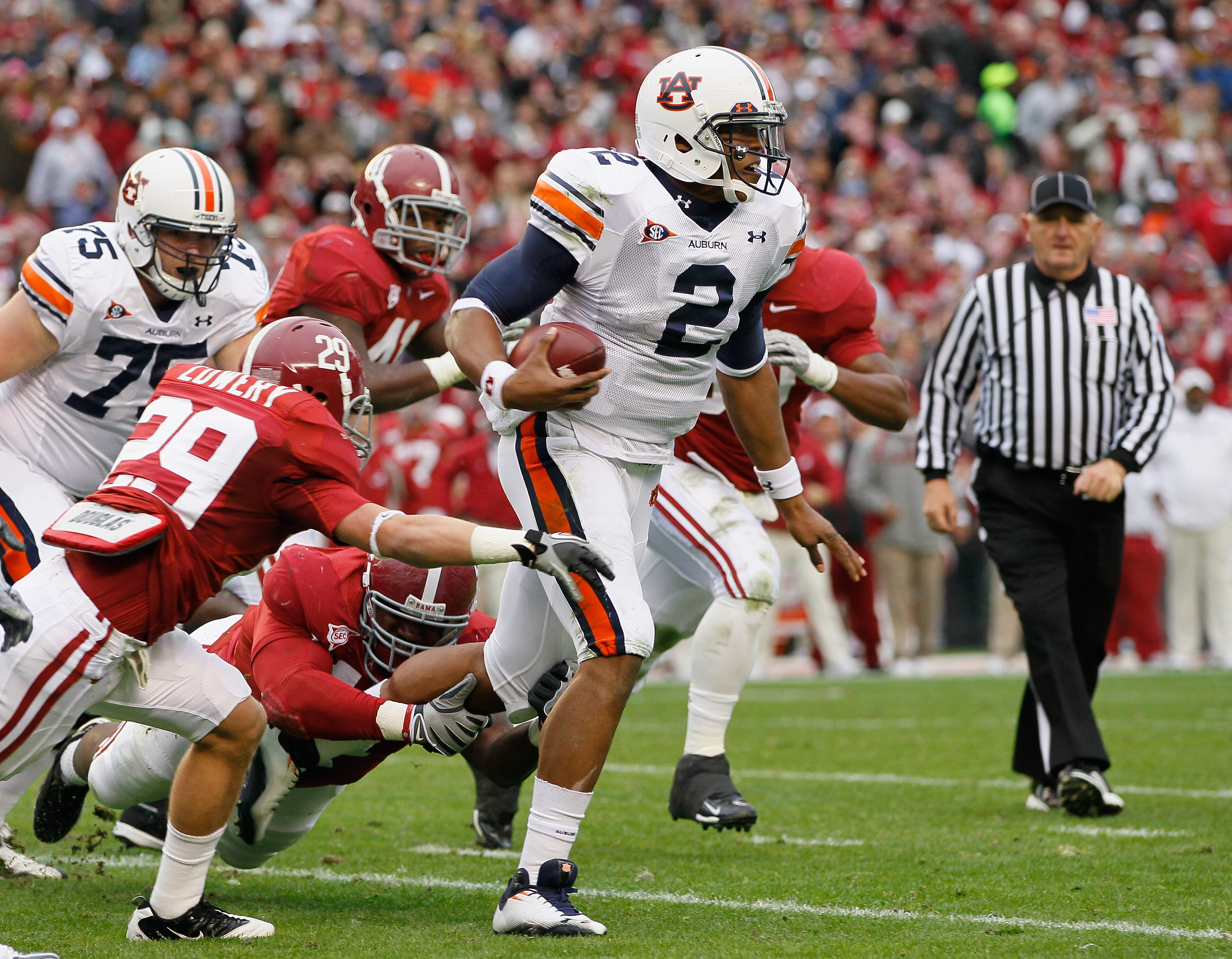 The Tide scored on their first three possessions, and Greg McElroy went 10-of-10 with two touchdowns in the first period.

They would also add a field goal early in the second quarter to make it 24-0.

And that's when the Tigers started to fight back. Cam Newton hit Emory Blake for a 36-yard touchdown in the second quarter and connected with Terrell Zachery on a 70-yard bomb in the opening moments of the third quarter. Newton would add a rushing touchdown of his own late in the third to make it 24-21.

After a Tide field goal made it 27-21, the Tigers took the lead for good early in the fourth when Newton hit Philip Lutzenkirchen for a seven-yard touchdown.

That made it 28-27, and the Auburn defense would hold out down the stretch. The comeback allowed the Tigers to finish the season a perfect 12-0, and they are now pretty much a lock for the BCS National Championship Game. 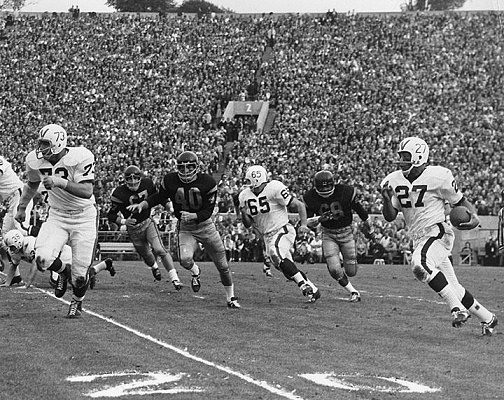 The 1963 Rose Bowl featured the best comeback ever by a team that still lost the game.

Wisconsin trailed USC 42-14 early in the fourth quarter and proceeded to score 23 points on the strength of three touchdowns and a safety.

Trailing just 42-37, the Badgers still had a chance to take the game with a minute left but were unable to recover an onside kick.

Nevertheless, it is still considered one of the great comeback efforts in college football history. 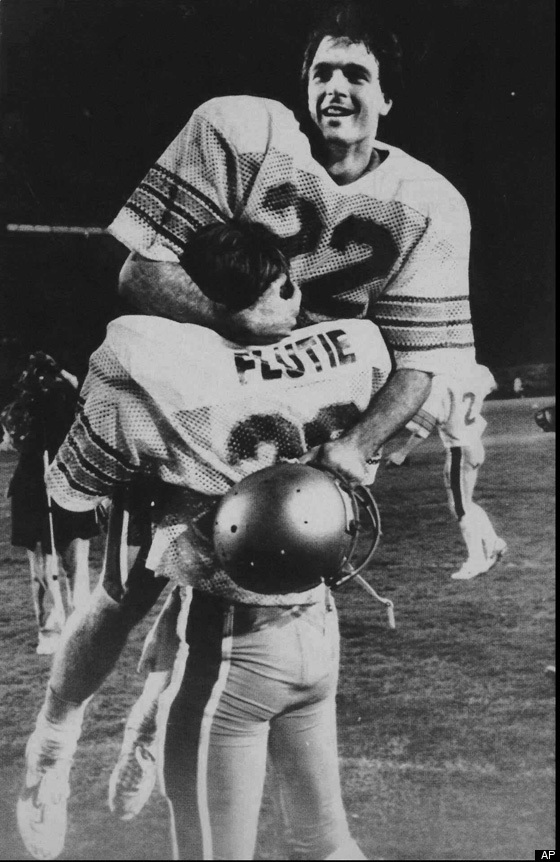 The 1984 game between the BC Eagles and the Miami Hurricanes did not see a big deficit crumble in the final minutes, but it is known for one of the most improbable game-winning plays in the history of sports.

With 28 seconds left in the game, BC trailed 45-41. Eventual Heisman winner Doug Flutie led his team from their own 20-yard line all the way to the Miami 48.

As time expired, Flutie rolled out to his right and launched a Hail Mary pass that was caught by Gerard Phelan for the game-winning score. 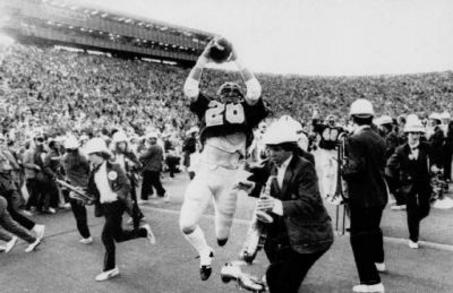 While the 1982 Big Game may not be the holder of the biggest comeback in terms of the deficit that was overcome, it does contain the single most amazing final play in college football history and maybe any sport.

Cal lead John Elway and the Stanford Cardinal 19-17 late in the fourth quarter, but Elway led his team down the field for the go-ahead field goal with four seconds left in the game.

No matter how controversial this finish may be, it's still amazing. 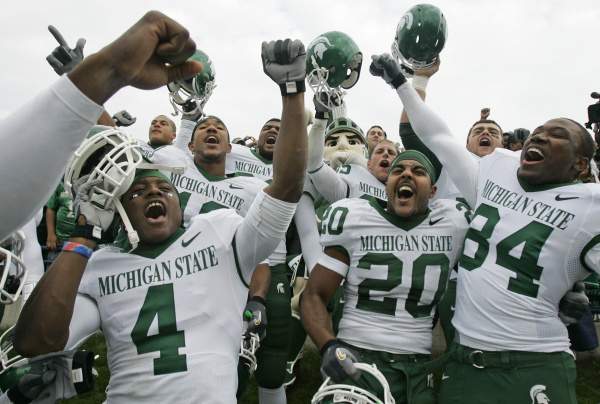 The Spartans trailed the Wildcats 38-3 with just over nine minutes left in the third quarter.

They would go on to score 38 unanswered points and would win 41-38.

Technically, it is the biggest comeback in NCAA history. 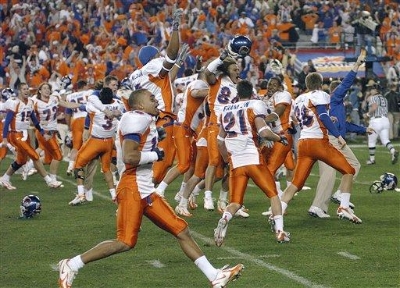 The 2007 Fiesta Bowl featured one of the wildest finishes in recent memory, with Boise State ultimately prevailing in their very first BCS bowl.

The Broncos had a 28-10 lead midway through the third quarter only to watch Adrian Peterson and the Sooners storm back to take a 35-28 lead with just over a minute left in the fourth quarter.

Boise, by all rights, should have been the victim of an improbable comeback. But instead, they pulled out one of their own.

With mere seconds remaining, Jared Zabransky and the Broncos successfully executed a hook-and-lateral that resulted in a 35-yard touchdown.

In overtime, they fell behind on an Adrian Peterson touchdown run but responded with one of their own. Then, in something out of a bad sports movie, Boise ran a Statue of Liberty play and were successful on the two-point conversion. 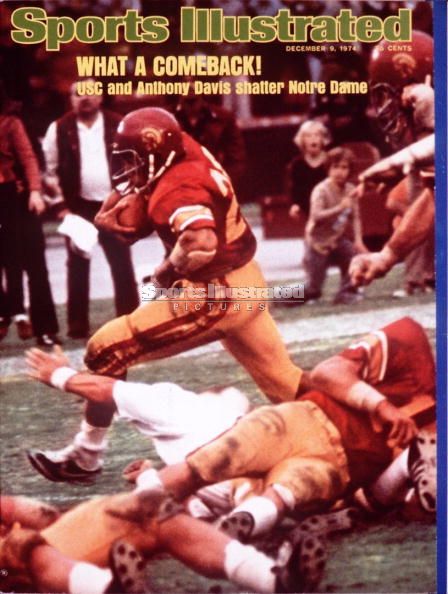 It is a game known simply as "The Comeback."

USC trailed Notre Dame 24-0 late in the first half (sound familiar), but Anthony Davis put the Trojans on the board when he got into the end zone with 10 seconds left in the half. The two-point conversion attempt failed, so the halftime score was 24-6.

Davis would take the opening kick of the second half 102 yards for a touchdown, and USC went on to score 35 points in the third quarter. 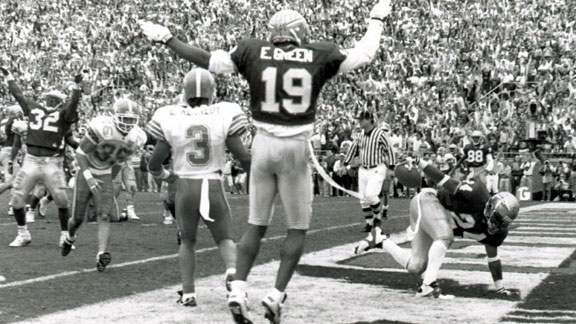 November 26, 1994. Both Florida and Florida State enter their annual matchup at Doak Campbell Stadium with 9-1 records, and both of them have a shot at the national championship.

The Gators start the fourth quarter with a 31-3 lead, and it obviously didn't look good for the Seminoles.

But they proceeded to score 28 unanswered points and ended the game with a 31-31 tie (there was no overtime back then).

The comeback tied the NCAA record for largest deficit overcome, and the Seminoles celebrated the tie while the Gators players walked off the field, defeated.

6. Maryland Vs. Miami, 1984: Frank Reich Leads The Comeback Over The Champs

In 1984, the Miami Hurricanes were the defending champions, and they were led by the great Bernie Kosar.

They hosted the Maryland Terrapins at the Orange Bowl in early November, and Kosar easily led his team to a 31-0 halftime lead.

Maryland quarterback Frank Reich, who had separated his shoulder earlier that season, came off the bench for Stan Gelbaugh in the second half. And with him on the field, the comeback began.

The Terps scored three touchdowns in the third quarter, and another early in the fourth. With the score now 34-28, Maryland took the lead for good when Reich hit Greg Hill on a 68 yard touchdown pass to take the lead. 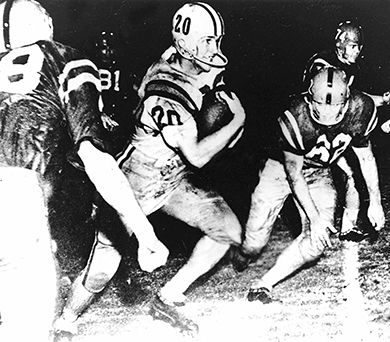 In the 1972 Magnolia Bowl, the annual matchup between LSU and Ole Miss, the Rebels had a 16-10 lead with four seconds to play.

But the Tigers had the ball on the Ole Miss 10-yard line and definitely had a chance to win the game.

LSU quarterback Bert Jones dropped back to pass, took his time and threw an incomplete pass. Amazingly, there was still a single second left on the home field clock.

Jones completed a touchdown pass to Brad Davis on the next play, and LSU won 17-16.

A few days later, a sign on the Louisiana state line read, "You are now entering Louisiana. Set your clocks back four seconds." 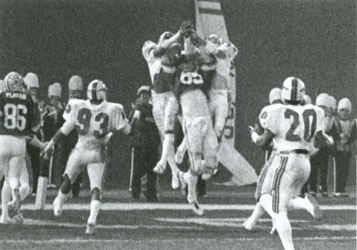 The third Holiday Bowl pitted the BYU Cougars against the Mustangs of SMU.

Behind quarterback Jim McMahon, the Cougars were keepers of the most explosive passing offense in the country. The Mustangs, on the other hand, were anchored by the "Pony Express," star running backs Craig James and Eric Dickerson.

With four minutes left in the game, the Mustangs had a 45-25 lead, and many BYU fans started heading for the exits. But McMahon screamed at them to stay, and then threw a touchdown pass in BYU's next drive.

They recovered an onside kick and scored again to make it 45-39. They forced SMU to punt on their final drive, and Bill Schoepflin blocked the punt, giving the Cougars the ball at the 41 yard line with 13 seconds left.

After two incomplete passes, McMahon fired a Hail Mary into the end zone, which was caught by tight end Clay Brown. The extra point gave the Cougars a 46-45 victory. 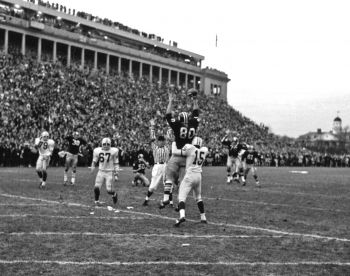 They easily pulled out to a 22-0 lead and had the game well in hand with a 29-13 lead late in the fourth quarter.

The game was recently recounted in a documentary called "Harvard Beats Yale 29-29."

By the way, among the players one that Harvard team was none other than Tommy Lee Jones. 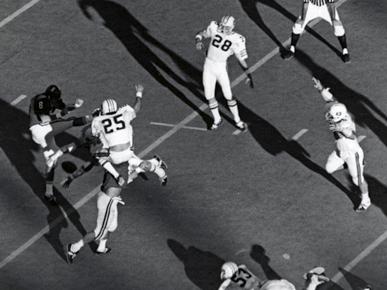 Yes, I'd say that Auburn has this whole comeback thing down.

If you think today's comeback was miraculous, it doesn't quite hold a candle to the comeback that the Tigers pulled off against Alabama in the 1972 Iron Bowl.

The Tide had a 16-0 lead with 10 minutes left in the game. After Auburn managed a field goal to cut the lead to 16-3, the wheels fell off for Alabama.

On Alabama's next possession after the field goal, the Tide's Greg Gantt's punt was blocked by Bill Newton and returned by David Langner 25 yards for the score. That made it 16-10.

Alabama's next possession? Exact same thing. Newton blocked it, and Langner ran it in. It was 17-16 Auburn, and that was your ballgame. 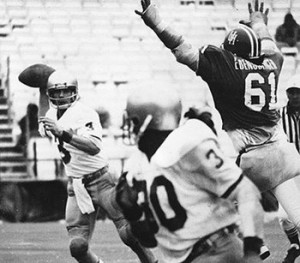 The 1979 Cotton Bowl may have been the first indication of what kind of greatness was going to come off the arm of Joe Montana.

After jumping out to a 12-0 first quarter lead, the Irish watched the Cougars score 34 unanswered points in the second and third quarter and entered the fourth quarter trailing 34-12.

Montana actually had to leave the game due to hypothermia and didn't return to action until there was 7:37 left in the game.

He led the Irish to a 23-point comeback, completing the game-winning pass to Kris Haines as time expired. The extra point was good, and the Irish won 35-34.

"The Comeback Kid" was born.