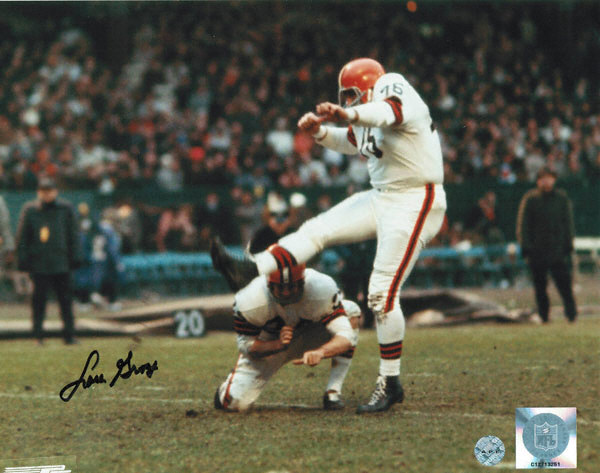 As late as the 1960's, placekickers were almost an afterthought in the NFL.

For most teams, the kicker was not a full-time position. Teams used players who were either athletic or strong to handle the kicking duties.

Often times, an offensive tackle (e.g. Lou Groza of the Cleveland Browns, pictured above), a backup quarterback (e.g. George Blanda of the Raiders) or even sometimes a star running back (e.g. Paul Hornung of the Packers) also served double duty as the kicker.

In other words, the team received placekicking for free.

Compare this to today, where every team has a placekicker. All of who are fairly well-paid to play maybe 12 plays a game if you consider extra points, field goals and kickoffs.

This past February, the Raiders' Al Davis made Sebastian Janikowski the highest-paid placekicker of all time with a four-year, $16-million dollar contract. Including $9 million in guaranteed money.

With all of that in mind, I thought it might be interesting to play a little placekicker Trivial Pursuit and see just who has been what in the world of NFL kicking.

What Kicker Holds the Record for Most Consecutive Extra Points Made? 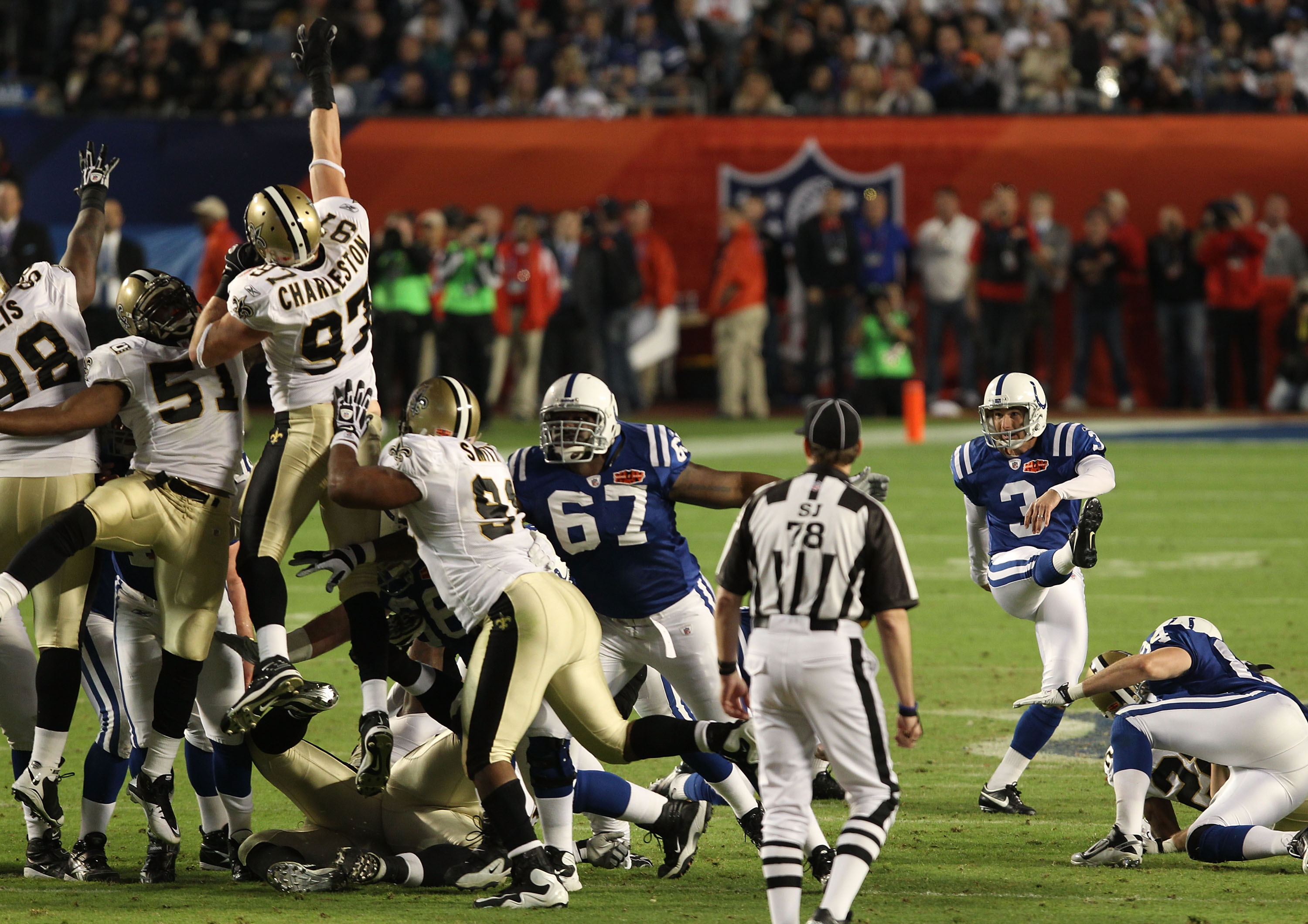 From Louisiana Tech University in Ruston, La., Matt Stover was drafted by the New York Giants with the 329th selection in the 1990 NFL draft.

He couldn't unseat incumbent kicker Matt Bahr, but won the kicking job from the Cleveland Browns in 1991.

What 2 Kickers Hold the Record for Longest Field Goal Made?

I was a 12-year-old boy sitting in the end zone of old Tulane stadium that day and saw this almost miraculous kick. Some of the things that made this kick more amazing are:

The record has also been officially equaled once, by Jason Elam of the Denver Broncos on Oct. 25, 1998, against the Jacksonville Jaguars.

The Only Kicker to be Named NFL MVP Is...? 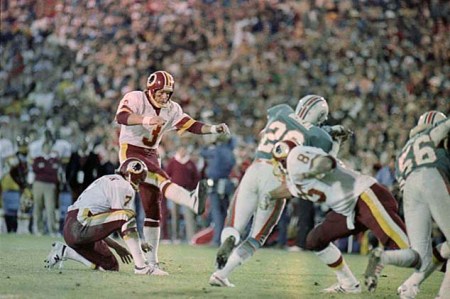 Many say that this was done as form of protest. Some say it was done to poke a finger in the eye of Raider owner Al Davis.

He is the only placekicker to win the award.

In the Washington Redskins' 27-17 victory in Super Bowl XVII over the Miami Dolphins, Moseley kicked two field goals and was successful on all three of his extra-point attempts. During the following season, he led the NFL in scoring with 161 points.

Moseley was the very last full-time, straight-legged kicker. He also holds the record for the most consecutive games with a field goal—38—between 1999 and 2001.

Speaking of the Last Straight-Legged Kicker, The 1st Soccer-Style Kicker Was.. 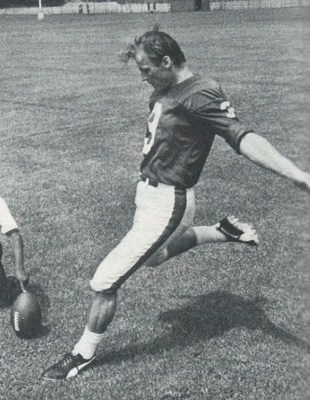 Prior to Gogolak, placekickers approached the ball straight on, with the toe making first contact with the ball. Upon graduation in 1964, he was signed by the American Football League's Buffalo Bills.

Gogolak holds the following records for the New York Giants:

What Kicker Holds the Most NFL Records and What Are They? 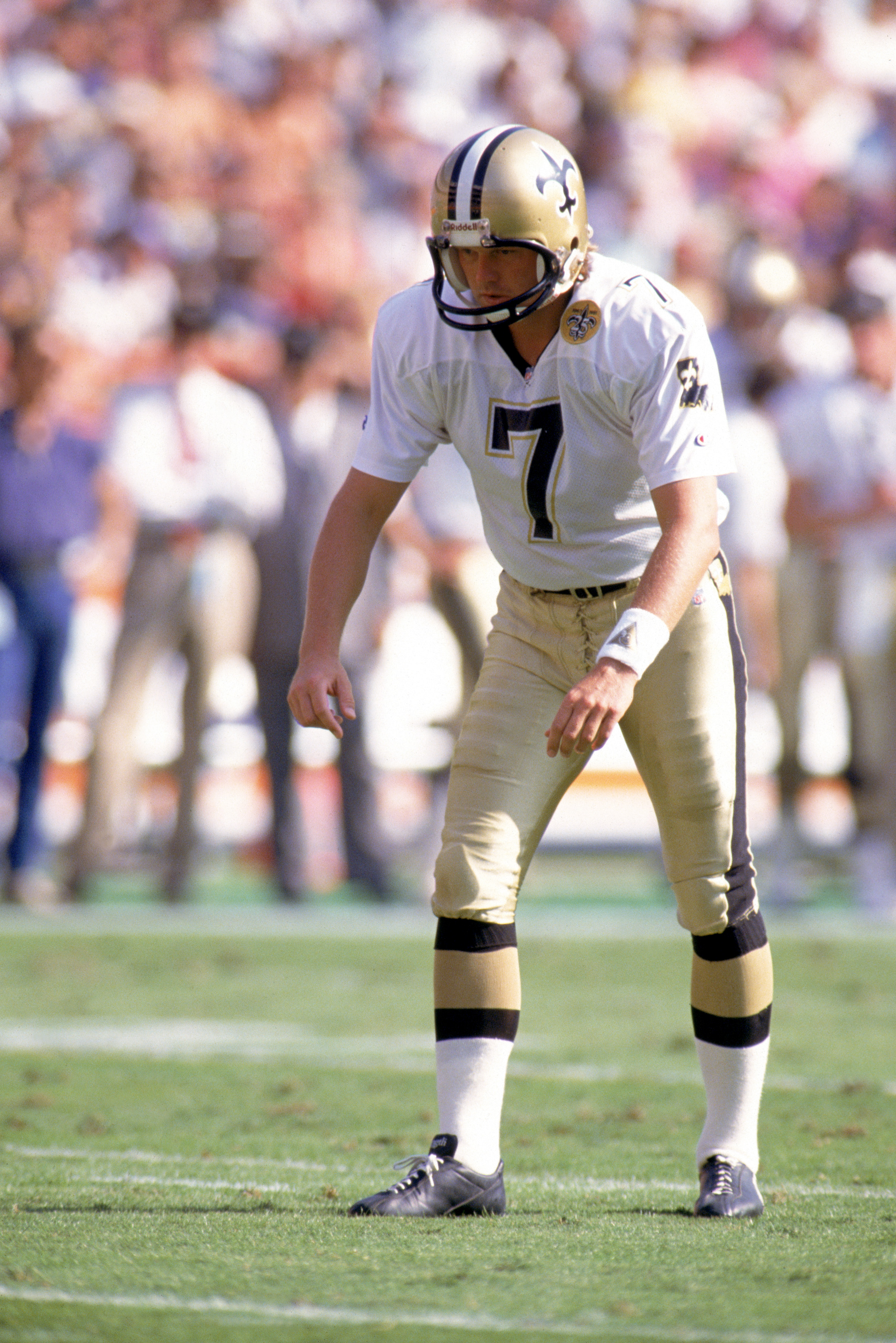 Born in Copenhagen, Denmark, Morten Anderson began his athletic career as a gymnast and a long jumper.

He barely missed becoming a member of the Danish junior national soccer team.

He visited the United States in 1977 as an exchange student. He first kicked an American football on a whim at Ben Davis High School in Indianapolis.

He was so impressive in his one season of high school football that he was given a scholarship to Michigan State University.

Drafted by the Saints in 1982, his NFL career got off to a shaky start. On his first NFL kickoff to start, Andersen twisted his ankle and missed eight weeks of the season.

Despite the early setback, he soon emerged as one of the strongest and most reliable placekickers in the NFL.

In his career with the Saints, Andersen was named to six Pro Bowls, kicked 302 field goals and scored 1,318 points. Andersen's proficiency with field-goal kicking earned him the nickname "Mr. Automatic."

Following the 1994 season, he was released by the Saints for salary-cap purposes and because his accuracy had started to decline.

He went on to kick for the Atlanta Falcons, the New York Giants and the Kansas City Chiefs. The list of records that Andersen holds is almost mind-boggling:

Who is the Only Full-Time Kicker in the NFL Hall of Fame? 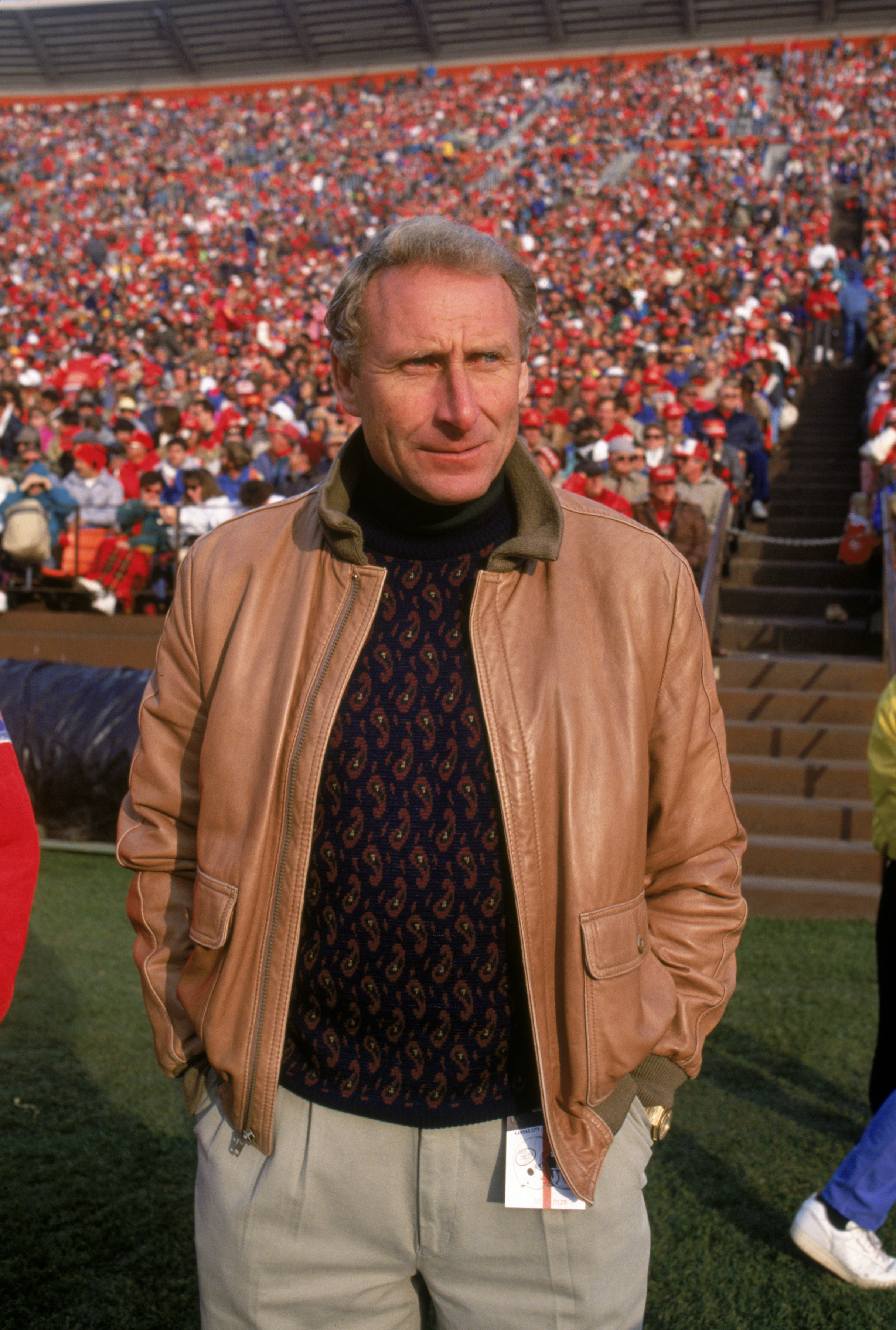 Jan Stenerud knew little of the American version of football until he came to the States on a skiing scholarship to Montana State University.

On his way to Bozeman in the fall of 1963, Jan stopped in Buffalo, N.Y., to visit his sister, Berit. While in Buffalo, he was introduced to American football by Berit's then-boyfriend, sportswriter Larry Felser.

Jan and his sister joined Felser for an AFL game between the Bills and, coincidentally, the Kansas City Chiefs. Jan was puzzled by the game (which ended in a 27-27 tie), unable to understand why the players "kept jumping on top of each other."

Of course, all of this would soon make sense.

Chiefs coach Hank Stram, who also kicked on the collegiate level at Purdue, was instrumental in developing the Stenerud's talent. In November of 1966, Stram decided that he would take a look at Stenerud in action, when Montana State played in Tulsa.

After seeing just one of Stenerud's kickoffs, Stram knew he had something special.

"He kicked the ball, and it sailed over the end zone and seven rows deep into the stands," Stram said. "That's all I needed to see."

In his final college season at Montana State (1966), Stenerud broke the NCAA record for most points by a kicker in a season (82). The Chiefs signed Stenerud following his All-American 1966 season and gave him a signing bonus of $80,000, a car of his choice and two first-class airline tickets from Bozeman to Oslo.

When asked what type of car he chose, Jan responded, "There weren't many Mercedes available in the U.S. back then, so I went for the (Oldsmobile) Toronado. It was a solid, front-wheel-drive car."

The bonus alone was more than he could have hoped to make as a ski jumper.

In the decade leading up to Stenerud's rookie year, professional kickers converted just 52 percent of their field goal attempts. In Stenerud's first four professional seasons, he was 108 for 153—a 71-percent success rate.

What Kicker Set the Record with 18 Consecutive Years with 1 Team? 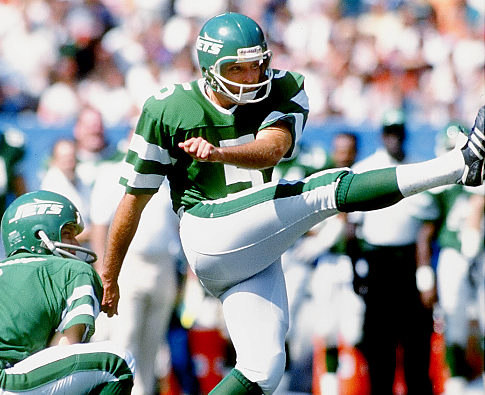 In the current era, missing three or four kicks can get a kicker canned.

It is tough to imagine a player staying on with a team for 18 consecutive seasons. Yet, that is just what Jets kicker Pat Leahy did from 1974 to 1991.

He is the team's all-time leading scorer, with 1,470 points, and scored 100 points or more seven different times over the course of his career. He currently ranks 17th on the list of highest NFL career scoring leaders.

He went to Saint Louis University and played on three of the school's national championship soccer teams.

Who is the Most Recent Kicker to Qualify for 100% Kicking Accuracy in a Season? 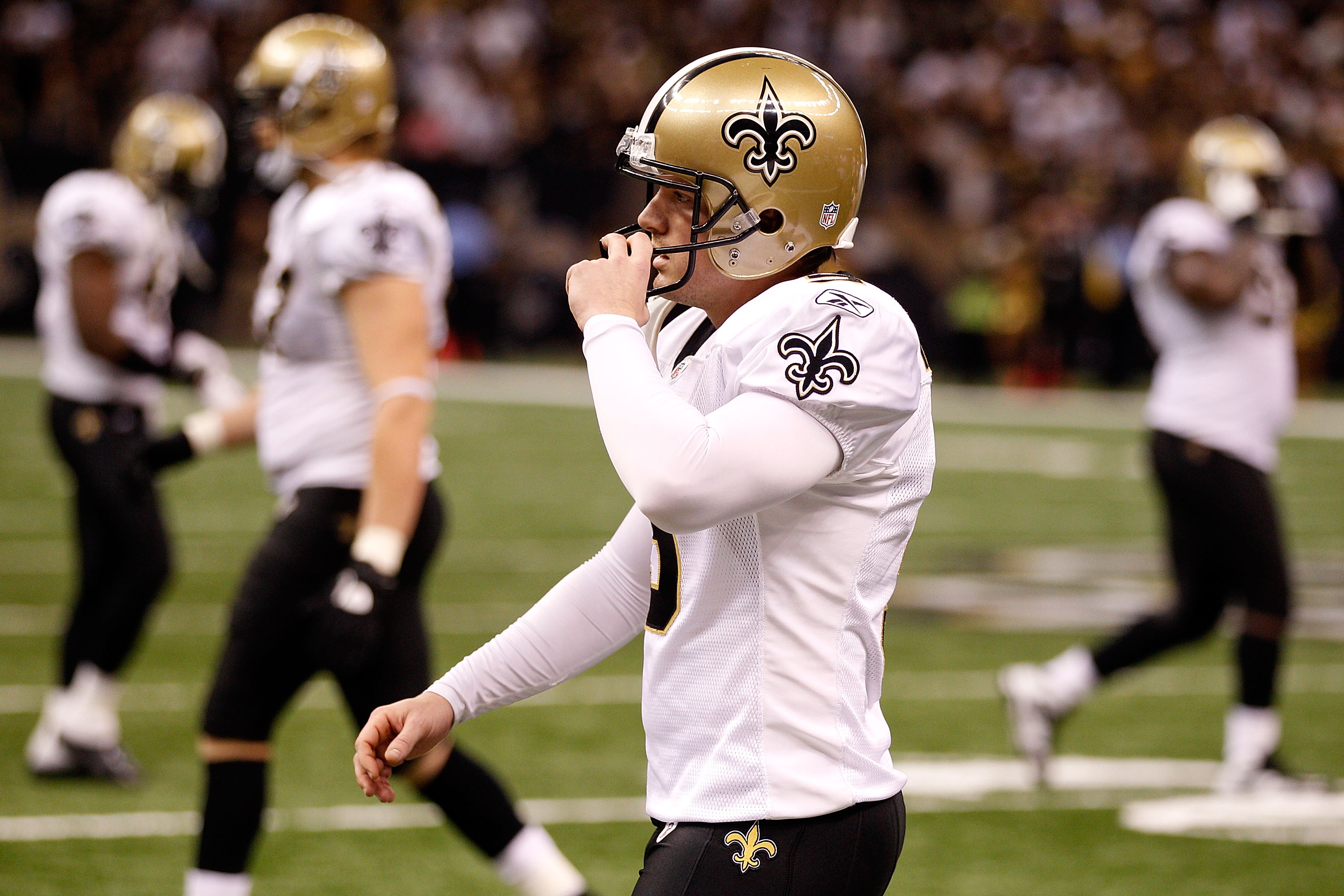 Five kickers have qualified for the proverbial "Mr. Perfect" award for NFL kickers.

The NFL requires a minimum of 10 field-goal attempts to be considered. All but one has had a dome stadium as a home field.

The most recent addition to this list is New Orleans Saints kicker Garrett Hartley, who was a perfect 13-13 for field goals in the 2008 season.

Others who have qualified are:

Who Holds the Record for Most Missed Field Goals in a Season? 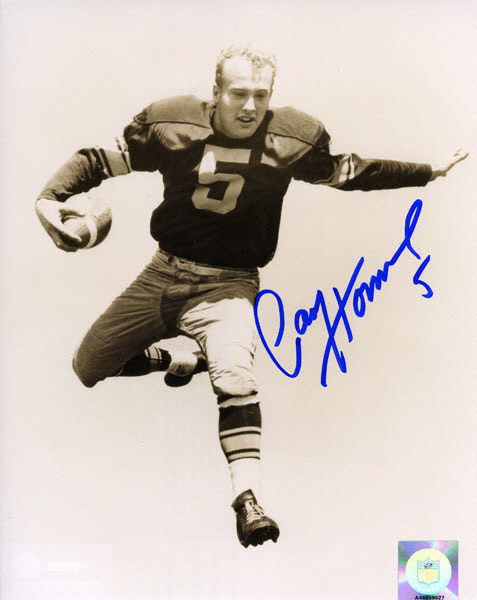 Perhaps the reason for the NFL considering full-time kickers was the season that NFL Hall of Famer (not as a kicker!!) Paul Hornung had in 1964.

In the following offseason, coach Vince Lombardi acquired Don Chandler from the New York Giants. Chandler took over the punting and placekicking duties, and helped the Packers to wins in the first two Super Bowls.

Not surprisingly, there are few pictures available of Hornung in the act of kicking the ball!!

Who Has the Most Extra Points in NFL History? 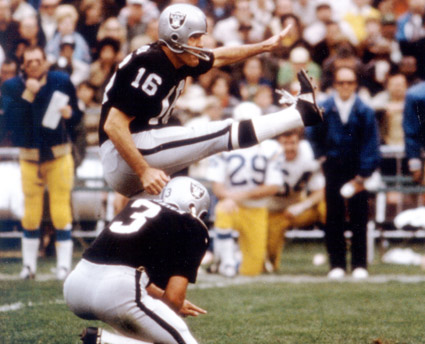 George Blanda passed on to his eternal reward this September, 10 days after his 83rd birthday.

No story about NFL kickers would be complete without some mention of the Grand Old Man of professional football.

He was initially drafted in 1949 by George Halas and the Chicago Bears. He played not only kicker, but quarterback and linebacker.

Blanda "retired" after the 1958 season, as he had been relegated to a role as full-time kicker that he did not like,

In 1960, upon the formation of the American Football League, Blanda signed with the Houston Oilers as both a quarterback and kicker.

He was derided by the sports media as an "NFL Reject." But he went on to lead the Oilers to the first two league titles in AFL history, and he was the All-AFL quarterback and won AFL Player of the Year honors in 1961.

Blanda went on to finish his career with the Raiders, playing with Oakland from 1967 to 1975. He is perhaps most famous for what he accomplished in a five-game run in 1971 at the age of 43.

Against the Steelers, Blanda threw for three touchdowns in relief of an injured Daryle Lamonica. One week later, his 48-yard field goal with three seconds remaining salvaged a 17–17 tie with the Kansas City Chiefs.

On Nov. 8, Blanda once again came off the bench to throw for a touchdown pass to tie the Cleveland Browns with 1:34 remaining, then kicked a 53-yard field goal with 0:03 left for the 23–20 win. Immediately after the winning field goal, Raiders radio announcer Bill King excitedly declared, "George Blanda has just been elected King of the World!

In the team's next game, Blanda replaced Lamonica in the fourth quarter and connected with Fred Biletnikoff on a touchdown pass with 2:28 left in the game to defeat the Denver Broncos, 24–19. The streak concluded one week later, when Blanda's 16-yard field goal in the closing seconds defeated the San Diego Chargers, 20–17.

What Kicker Played with 4 Different Teams in 1 Season? 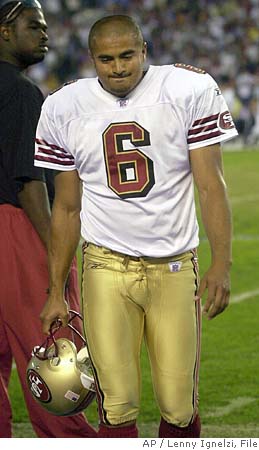 This is a question and a player out of obscurity.

Jose Cortez has had an extensive journeyman NFL career. He signed as an undrafted free agent with the Cleveland Browns for the 1999 NFL season.

After being cut by the Browns, signed and cut by the San Diego Chargers, he made the practice squad of the New York Giants and appeared in one game for them.

Cortez was then allocated to NFL Europe, where he played for the Amsterdam Admirals. Upon returning to the Giants, he was released, re-signed with the Chargers and was re-released.

After being released by the Chargers again, he joined the Los Angeles Xtreme of the brand-new XFL. Cortez, along with quarterback Tommy Maddox, led the Xtreme to a 7-3 record and the XFL title; Cortez also led the league in scoring with 20 field goals.

Cortez earned Most Valuable Player honors in the championship game, kicking four field goals. Cortez's success in the XFL earned him a starting spot with the San Francisco 49ers, who signed Cortez before the 2001 NFL season.

He played in every game for the Niners, before being released following the season. He signed with the Washington Redskins just after the start of the 2002 season.

He played the remainder of the season for Washington. He spent the next two years with the Minnesota Vikings. After being cut by Minnesota, he briefly kicked for the Detroit Fury of the Arena Football League before returning to NFL action.

In 2005, he became the ultimate fill-in for injured kickers. He substituted for Billy Cundiff (Dallas), David Akers (Philadelphia), and Joe Nedney (San Francisco), and was used primarily on kickoffs for the Colts while Mike Vanderjagt handled PATs and field goals.