Deron Williams' Crossover Dribble and the Art of "Breaking Ankles" 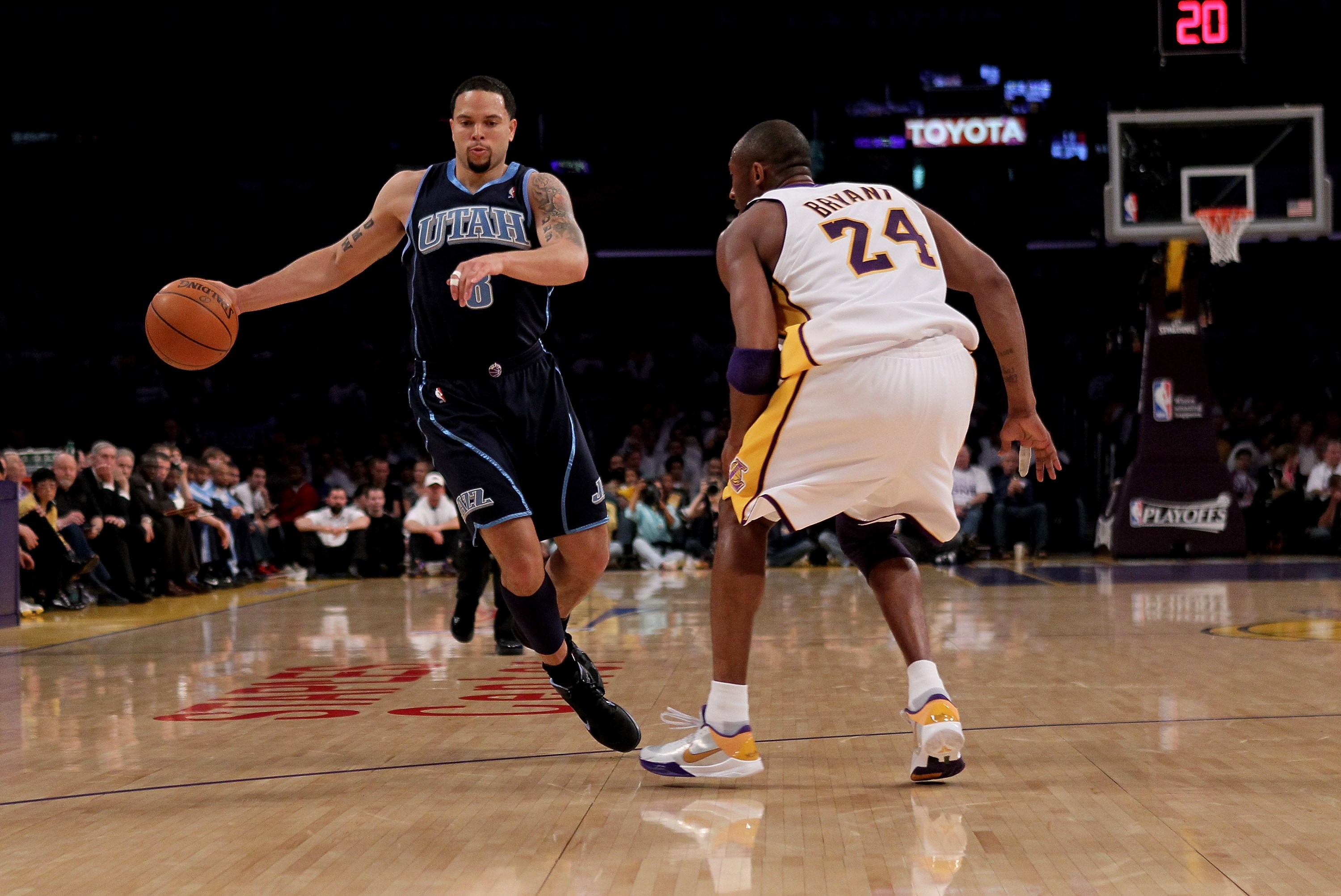 Deron Williams has one of the most prolific crossover dribble moves in the league.Stephen Dunn/Getty Images

Utah Jazz All-star guard Deron Williams has used the crossover dribble to embarrass opposing players.  Sometimes, Williams' move is so prolific, it makes the other player just shake his head and wonder how he's going to look getting crossed-over on SportsCenter highlights that night.

The person given the most credit for revolutionizing this move has to be Tim Hardaway, formerly of Run TMC and the Golden State Warriors. Tim Hardaway had such a killer crossover, that he developed the nickname "Mr. Crossover."

Many players have taken this one move and have used it to take their game to another level, but the fact of the matter is; the crossover dribble isn't easy to perfect.

There have been a few variations to the move, and everyone remembers when the great Michael "Air" Jordan used it to "shake off" a Utah Jazz player in an NBA Championship Game back in the 90s. But even the great Jordan's crossover wasn't as smooth as the players that made this list.

A lot of people also remember when Allen Iverson used it to "clown" Jordan at the top of the key during a game in Philadelphia when Iverson first got into the league. Iverson used it to "clown" so many people and break so many ankles, that haters started to say he was committing a violation by "carrying the ball."  But even if he did "carry it" sometimes, it was still an incredible move that nobody could stop.

It was at this time that the crossover dribble started to really gain momentum as the "And1" Mixed Tapes started to gain popularity. Steve Francis was one of the NBA players along with Iverson considered to have enough "street credits" to play that "free style" playground sort of Harlem Globetrotter type of basketball.

Iverson took what Tim Hardaway started, and then passed the torch to Deron Williams and Chris Paul.  Now that we have introduced what may be the most non-defensible and prolific offensive move in all of basketball, let's take a look at some of the players who have taken it to another level.

When you see the player's name, click on it and a video-mix of his best crossover dribble moves will be played. 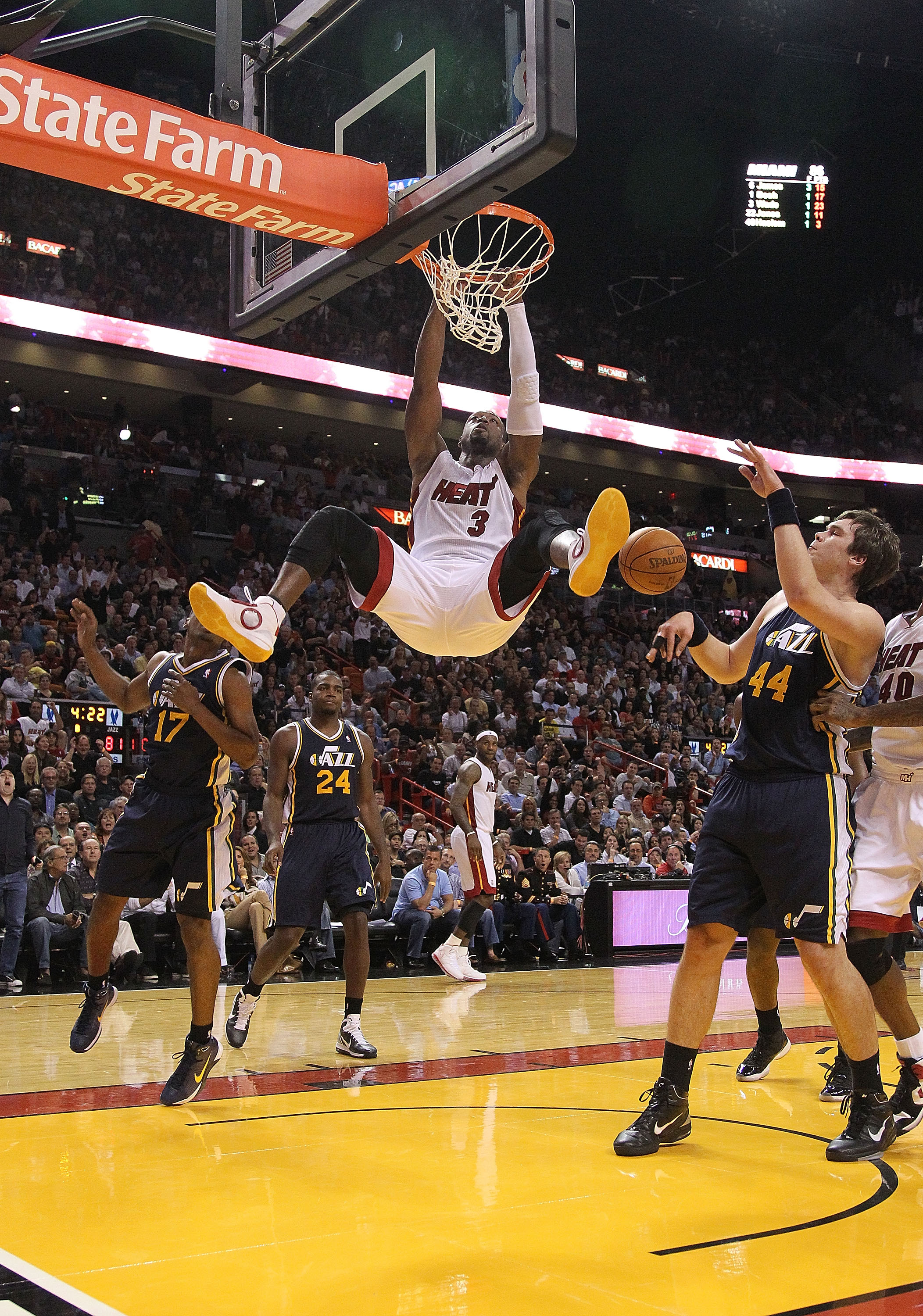 Wade's crossover is so prolific because he is one of the best "finishers" in the league.Mike Ehrmann/Getty Images

The Miami Heat's Dwayne Wade is No. 2 on my list of players that use the crossover dribble to break ankles and litterally make a player "just quit" during the play.  Bone orthopedic specialists in the Miami area have to love Dwayne Wade because he sends them a lot of business.

Even the best players "limp-in" to see the Doctor after getting their ankles broken by Dwayne Wade, and usually end-up walking on crutches.

When the crossover dribble is used effectively by great players like D-Wade and Deron Williams, there isn't a defensive player on this planet who can stop it.

If you really look at the way the move is implemented very closely, it will always work in a sport like basketball because the average defensive player is going to react "defensively" to the offensive player's first move.

And once Dwayne Wade or Deron Williams sees their opponent's legs get crossed-up or see them out of position, they'll cross them over, causing the opponent to fall to the ground because his ankles can't stand the quick reaction to the crossover dribble.

Player's moms have even been known to laugh at someone getting crossover and even say "he made that guy fall down...how did he do that?"

Great players like Wade and Williams know that when they can get their opponent to "rock-back" on his heels and get off-balanced, like Dick Vitale would say, "Its Crossover City Baby!" But everyone knows that a crossover dribble is not effective unless the one who is performing it can "finish" by scoring the basket.

This is exactly how players like Wade and Williams have perfected this move.  Its because they "finish" by scoring a basket once they see their opponent lying on the ground with his ankles broken. 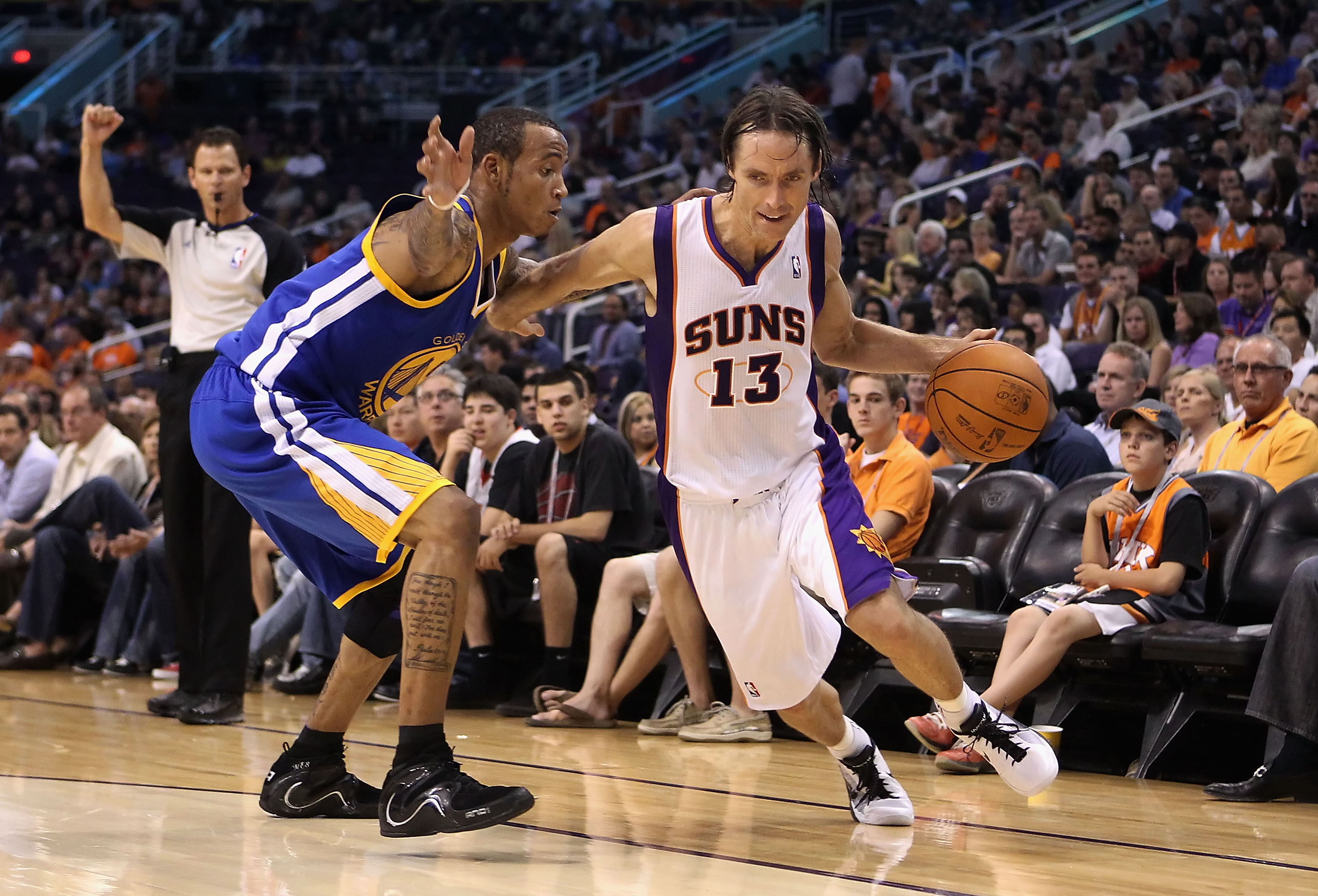 Its too late, Nash has already crossed him over.Christian Petersen/Getty Images

The Great Steve Nash is still breaking ankles to this day.  NBA players now have to acknowledge that Nash has sort of a deceptive first step.  And usually when people think he is not going to do it, that's when he breaks out his killer crossover and leaves them standing in their tracks.

Anyone who has seen Steve Nash break ankles and embarrass opposing players, knows that he uses superb foot-working skills derived from playing soccer to get to a certain position on the floor.  This allows him to crossover with the dribble and get to the basket with ease.  Watch him work his jelly. 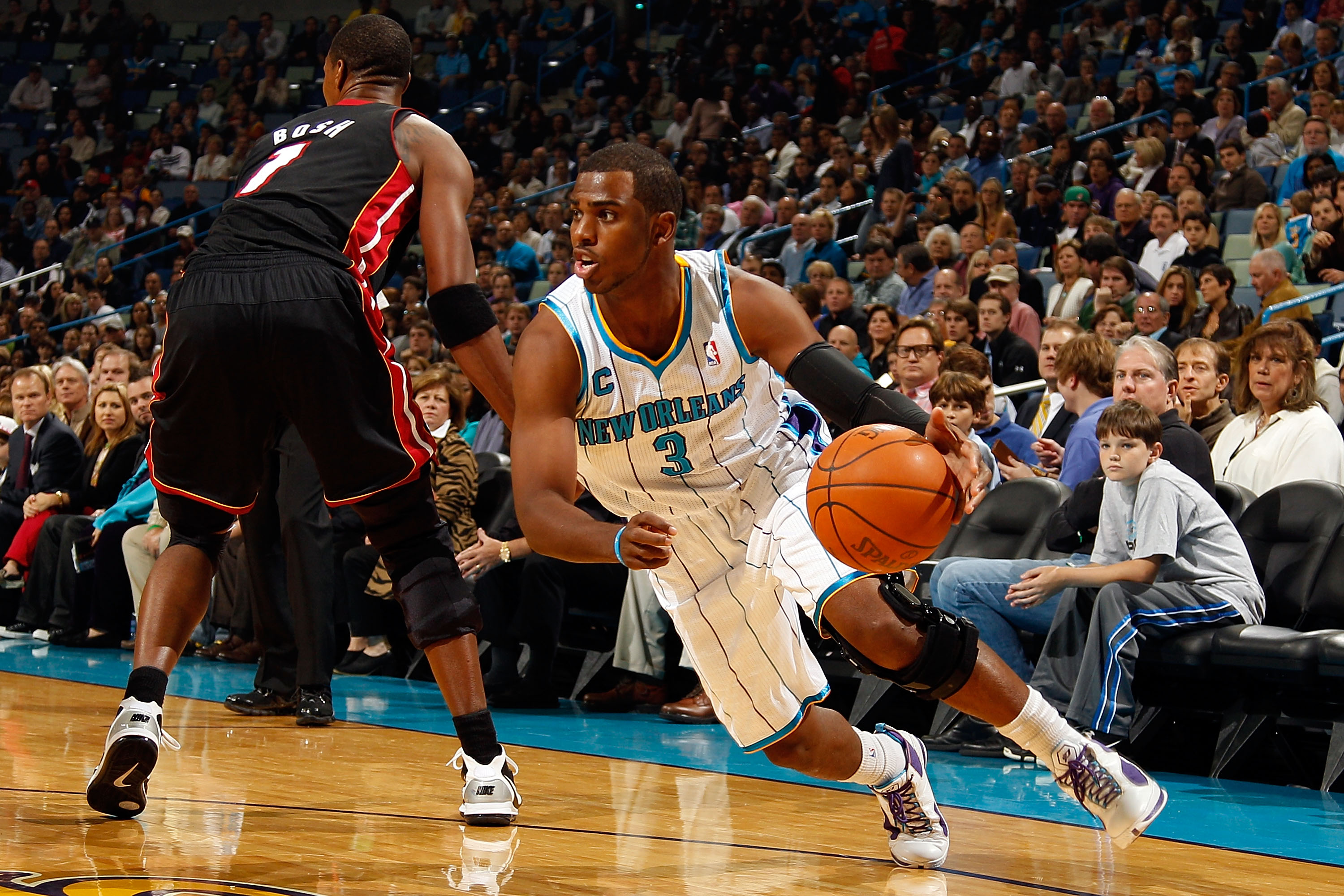 Chris Paul could be No. 1 on my list, but he has some great players in front of him, so this doesn't take away from his exceptional ability to perform the crossover dribble move.

Paul is arguably one of the best ball-handling guards in the league bar none.  Paul was the first one that I ever saw do the wrap-around dribble at mid-court on a break right before he unleashes another spectacular move, that will usually embarrass even the greatest defenders.

When players like Chris Paul, Steve Nash, Dwayne Wade and Deron Williams do the crossover dribble, they leave coaches and opposing players scratching their heads saying "there is no way to stop that."

Kobe Bryant's Crossover Dribble Rivals That Of a True Point-Guard: Its That Good 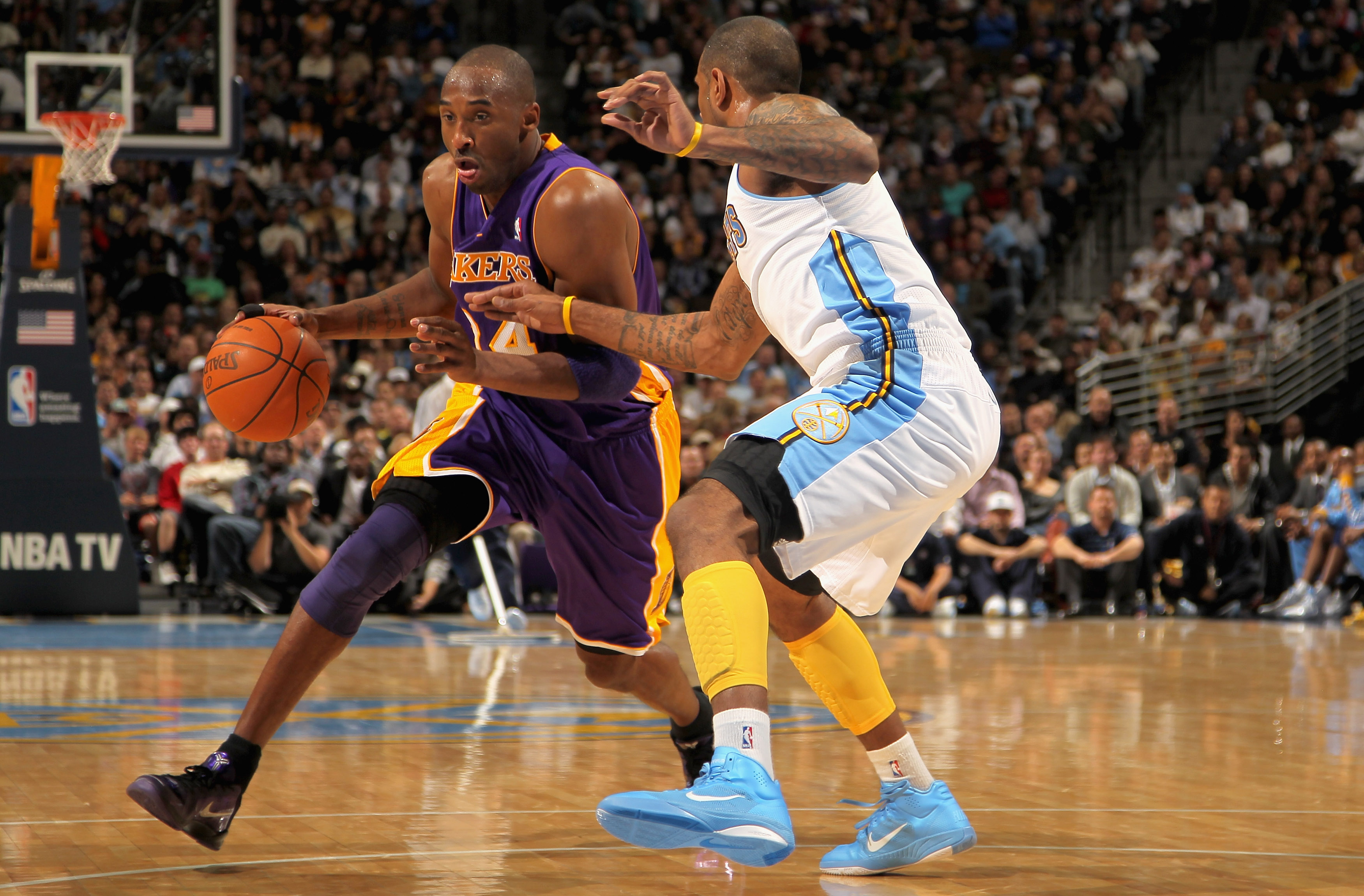 Uh oh, Kobe is about to stop and take this guy to "crossover" school.Doug Pensinger/Getty Images

I often run out of superlatives when trying to describe the great Kobe Bryant's crossover dribble and how he basically assassinates every opponent, but for the sake of this countdown, I am going to try. Kobe Bryant is simply the world's greatest at what he does.

The only reason I have Kobe Bryant at No. 5 on my list is because he does so many other intangibles and those other guards before him on the list are just totally sick with their crossover moves.

But Bryant at 6-foot 6-inches tall, handles the ball with point-guard like skills.  He can dribble effectively with both hands, right or left, and has no weaknesses.

Bleacher Report readers do you hear me?  THIS MAN HAS NO WEAKNESSES ON THE BASKETBALL COURT!

In fact, Kobe has so many moves that he sometimes doesn't remember to use the crossover even though he knows that it is unstoppable.  Imagine having better moves in your arsenal than the crossover? You would then be on the same level as Kobe Bryant.

Watch how he rocks his opponent to sleep and them kills him with the crossover dribble.

Derrick Roses Crossover Is So Sick 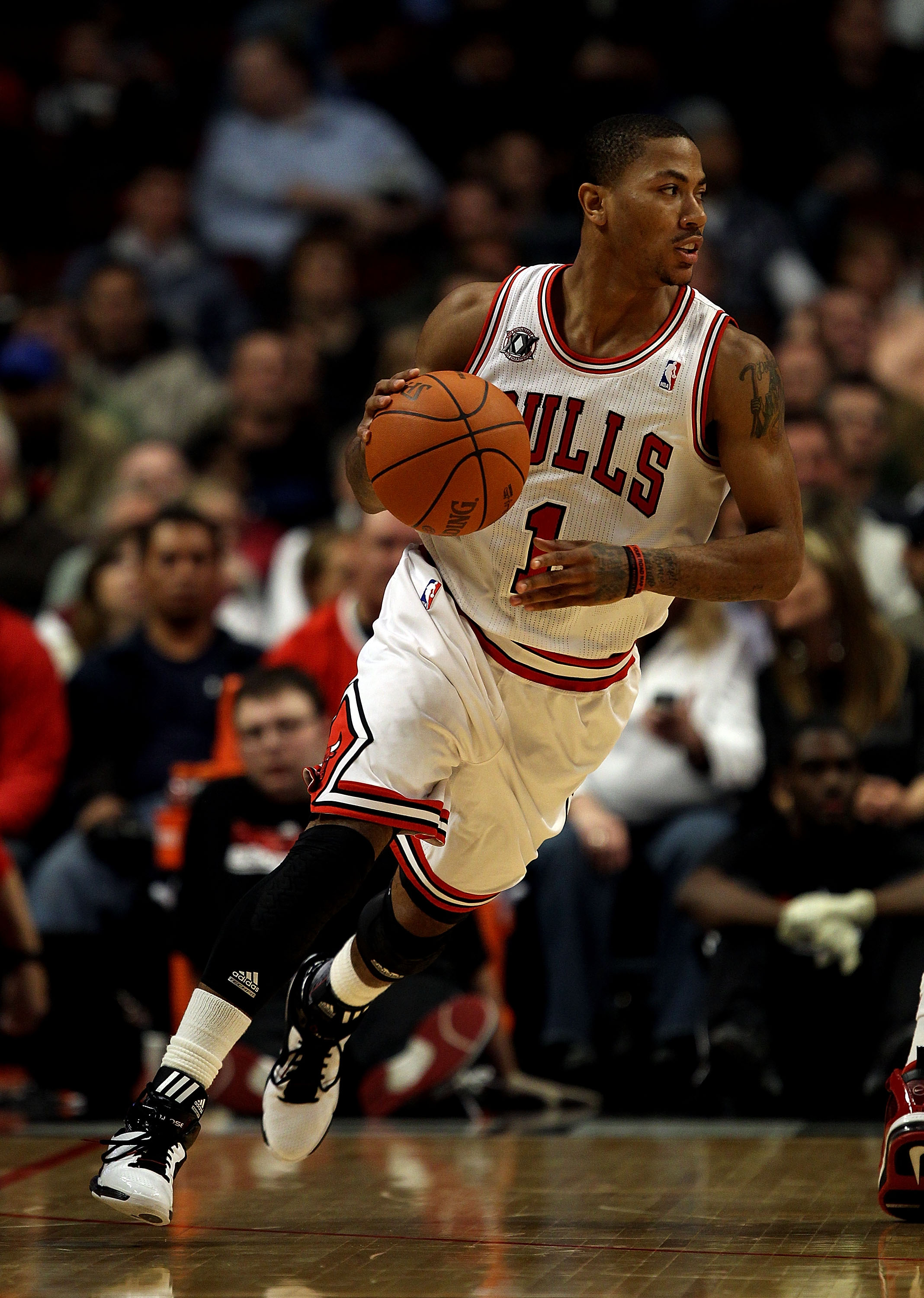 Chicago's Derrick Rose has superior dribbling skills and often uses a killer crossover dribble to render his opponents defenseless.  Rose is a do-it-all jumper who can explode to the rim from either leg, and will usually finish with extreme force.

When the subject of vertical leaping is mentioned, no one can keep Derrick Rose out of the conversation and this is one of the things that makes his crossover dribble move so lethal.

Check out the video of him breaking Andre Miller's ankles. This is the essence of the crossover dribble making it one of the most "prolific" moves in all of basketball. Sorry Andre, "it happens to the best of us man."

Russell "Cat" Westbrook Combines The Crossover With Slashing and Leaping 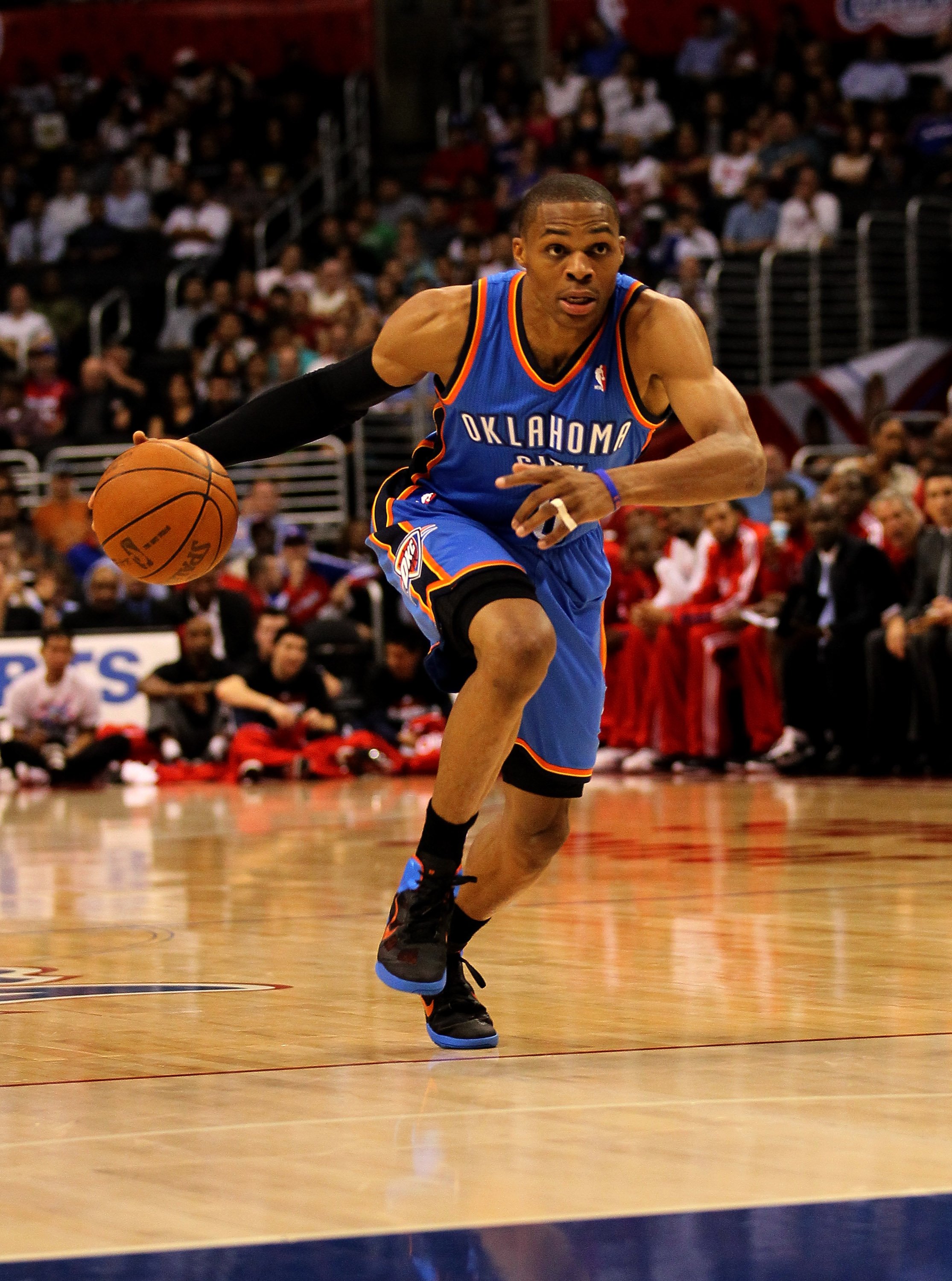 The Oklahoma City Thunder's Russell Westbrook some of the best slashing skills in the league.  When "Cat" Westbrook has his crossover working, he is virtually unstoppable because he also has excellent leaping ability like Derrick Rose.

Westbrook will start-out one way, stop, and then cross his opponent over, going in another totally different direction, often leaving his opponent virtually helpless.  He is among the best finishers in the league and usually finishes with a fierce slam dunk.

I would like to reiterate an important point here.  The crossover dribble does not work if the player can't finish the shot.  Great finishers like Westbrook, Rose, Bryant and Wade have an advantage over their opponents because of their excellent ball-handling skills and great leaping ability, but when they add a killer crossover dribble to the mix, this makes them virtually "unstoppable." 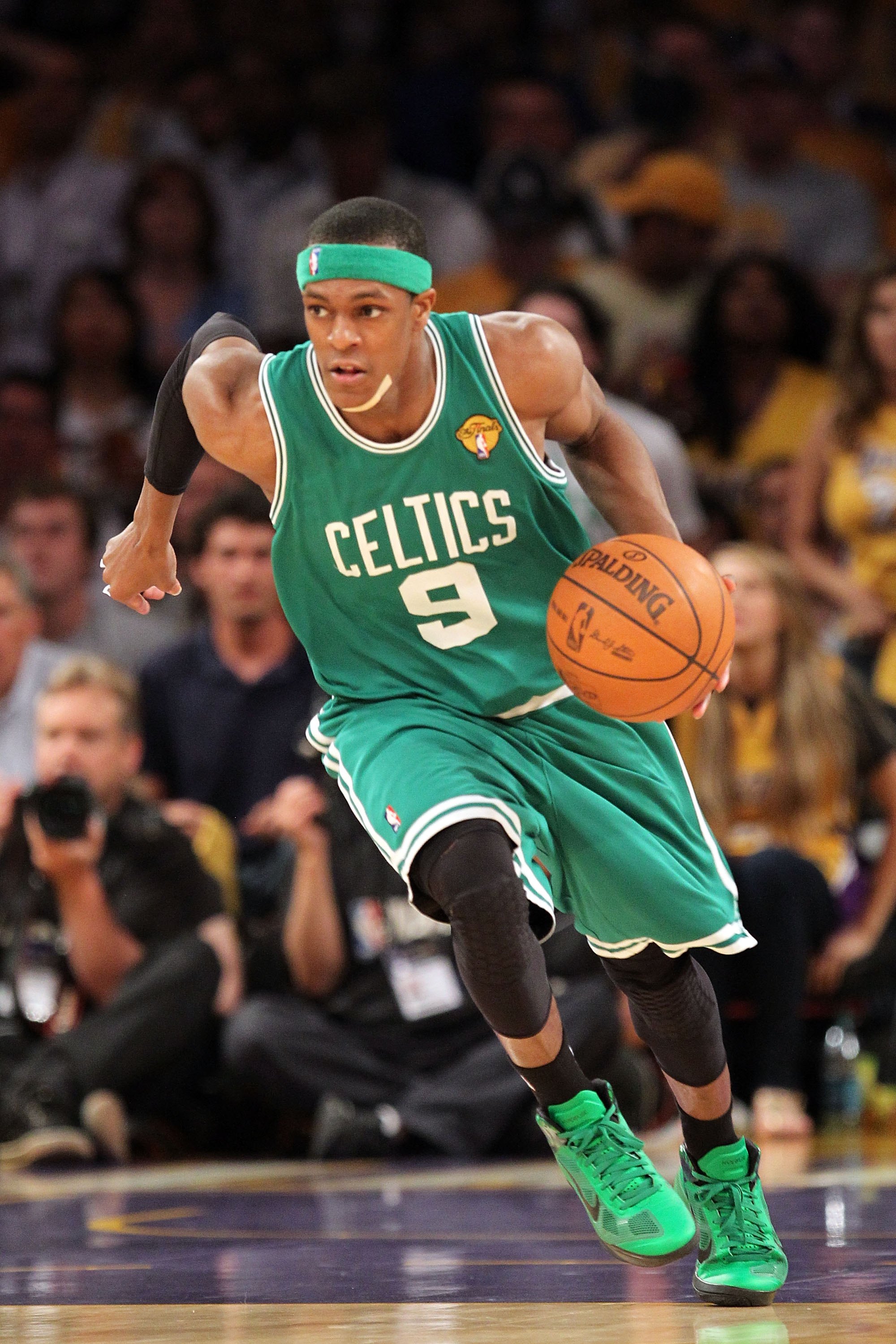 Rajon Rondo has an arsenal of dribble moves including the crossover.Ronald Martinez/Getty Images

The Boston Celtics Guard Rajon Rondo makes the list with an uncanny and unorthodox crossover dribble that has been known to break ankles and leave opponents in amazement. Rondo flies under the radar of Coach Doc Rivers and plays like an old "gunslinger" with the unique passes and the unorthodox moves that he makes to the basket.

Rajon Rondo is cat-quick like Russell Westbrook and brings a sort of unorthodox playing style to the game that nobody can quite figure-out yet. Click on his name above to see one of his best crossover moves.

Carmelo Anthony Is Probably The Tallest Player With The Best Handles 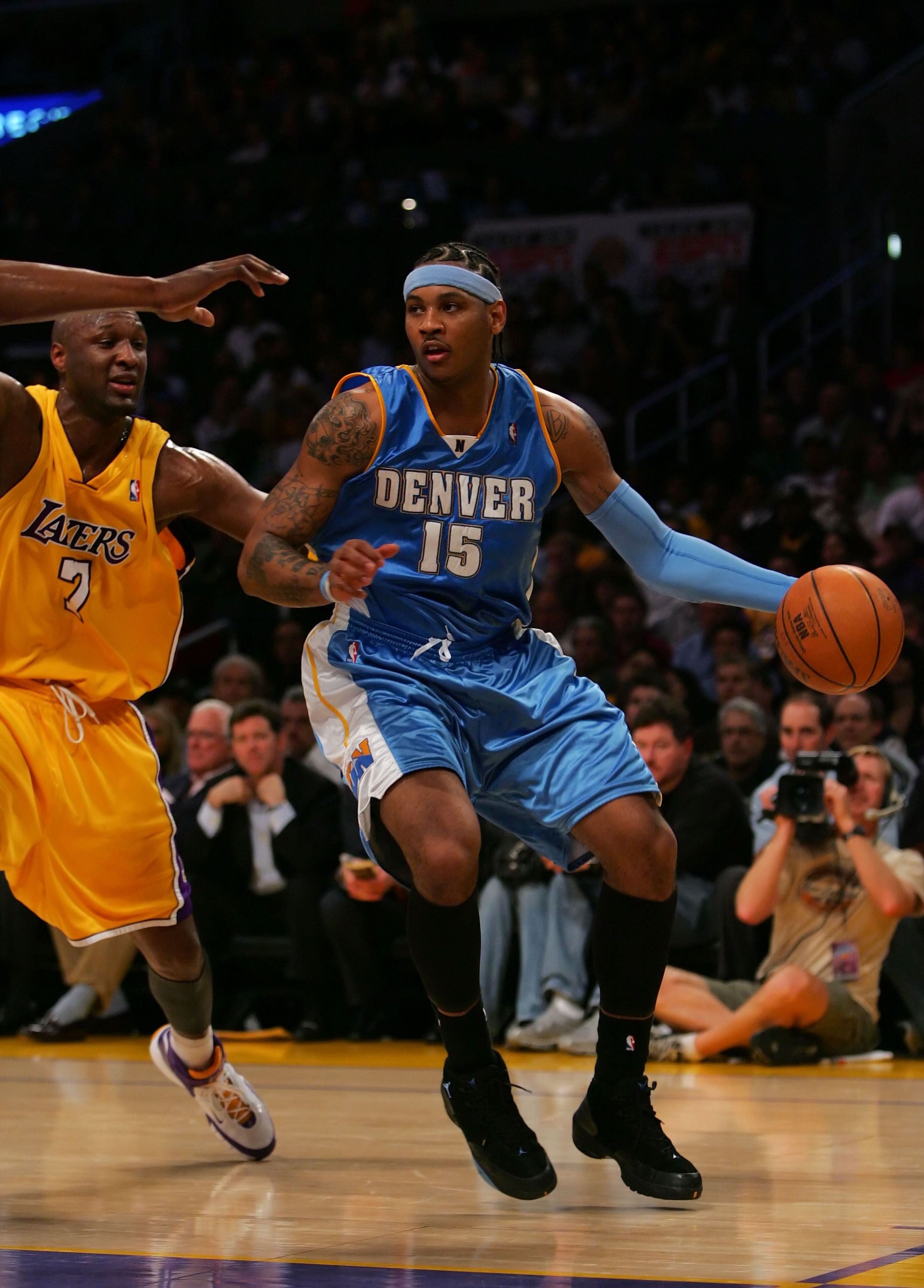 The Denver Nuggets Carmelo Anthony makes the list because he is probably one of the best ball-handling forwards in the game.  Melo has exclusive skills and is in the same category with Kobe Bryant for being the "prototypical" basketball player that most coaches would like to start a team with.

Carmelo Anthony can shoot and handle the ball like a point guard, and at 6-8, has physical attributes that make him unstoppable anywhere on the court.  Melo often uses the crossover but really doesn't have to when he is guarded by players his own size.

Click on the link above and checkout the video of Carmelo Anthony crossing-over Vince Carter and literally breaking his ankles. This is what the crossover dribble can do for anyone who knows how to use it properly. 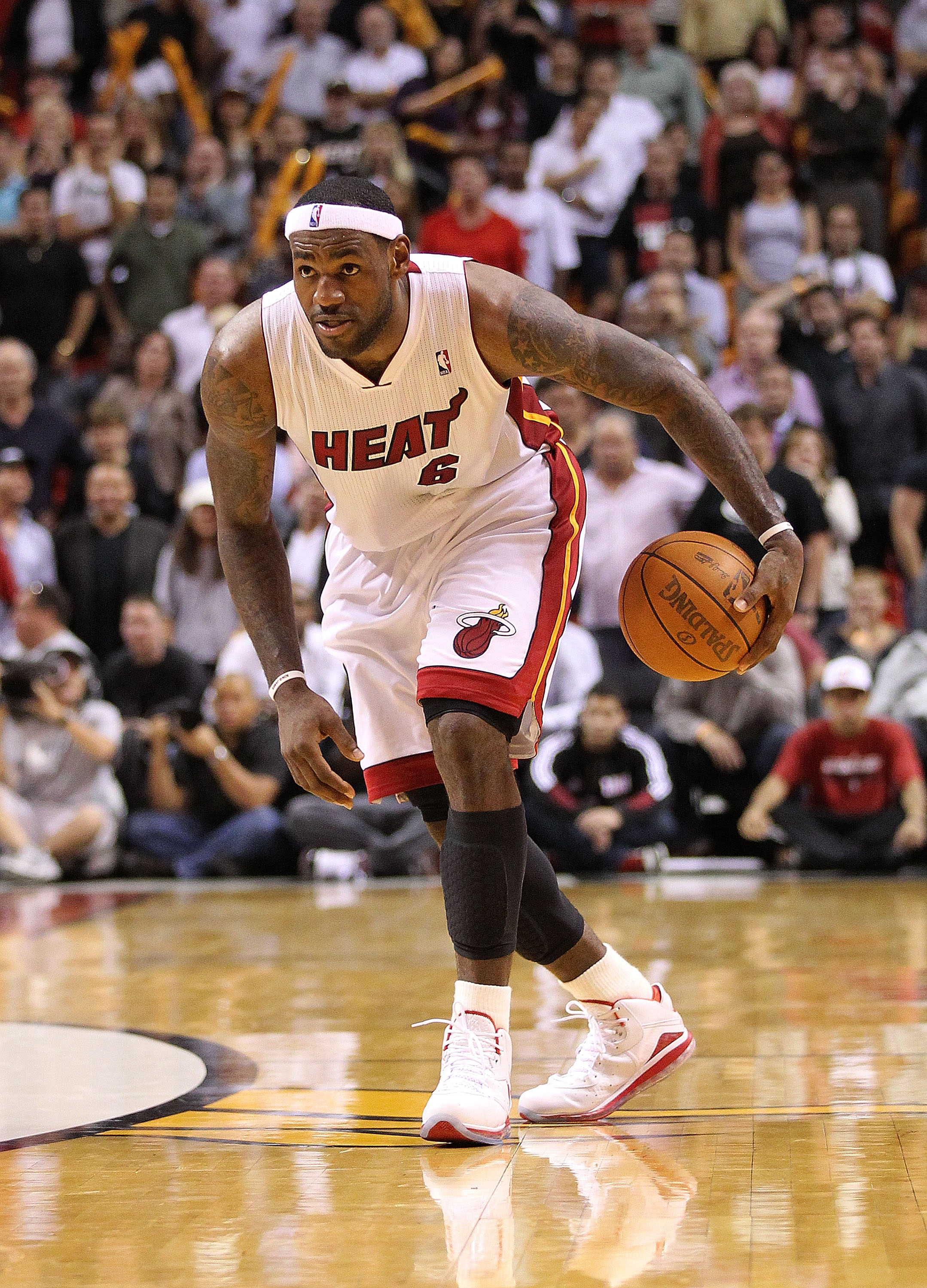 There as no way that I could leave LeBron James off of this list. The fact of the matter is;  LeBron James is just a basketball player that can do it all.  James has been playing a lot of point-guard lately, and he has been known to have the crossover dribble in his arsenal of offensive weapons.

At 6-8, and with better ball-handling skills than most true point-guards, James is a man among boys when he gets a full head of steam heading toward the basket. James has been called a upgrade over the great Magic Johnson with even greater athletic ability.

He uses the crossover to get to the rim on occasions when he is not totally dominating his opponents with his brute strength and the sheer ability to just jump over and go around people.

It is virtually impossible to list the top 10 best crossover dribblers of all-time because there are so many.  This is why I am using this slide to showcase "some" of the best ever.

Click on LeBron James at the top to see some of the best to ever do this move including: