Miami Dolphins: Taking a Look at Who May Replace Injured QB Chad Pennington 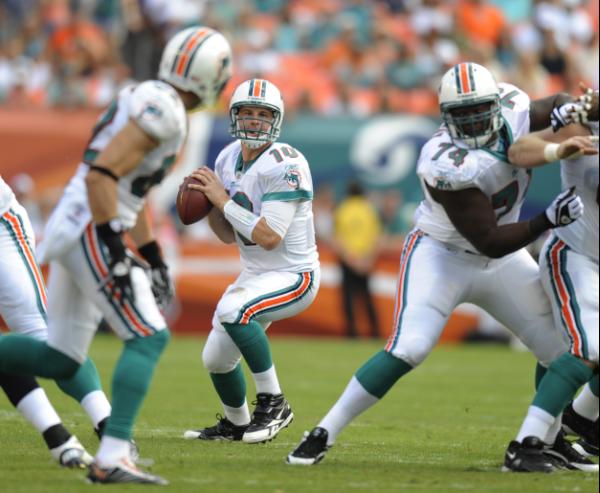 Limping off the sidelines has become a theme of Week 10.  Outstretched arms of training personnel have been used to full effect, while the x-ray room in several team facilities has been as busy as a New York subway.

With a win in hand a small ounce of confidence running through the Dolphins historic veins, Miami's 29-17 victory over the Tennessee Titans on Sunday afternoon was spoiled slightly, by two key injuries to the quarterback position.

First Chad Pennington, then Chad Henne.  That was the scenario that each Dolphins fan witnessed throughout the games four quarters, as both of Miami's favored quarterbacks were escorted off the field almost instantaneously.

And what happened exactly?

In Chad Pennington's case, it was the usual scenario of his troublesome right shoulder.  After lasting only two plays, No.10 exited toward the sidelines, and looked to be in a spot of bother from there on out.

As for Chad Henne, the former starting quarterback managed to play a major part in the Dolphins win throwing for 240 yards and 1 touchdown.  Unfortunately though, a knee injury sustained in the third quarter on an incomplete pass ended Henne's day, and realistically his chance at the starting role.

So where to now for head coach Tony Sparano?

Already people are debating, discussing and arguing who the Dolphins should select.  Therefore, lets jump on the bandwagon to, and take a look at who Miami may choose to go with for the immediate future. 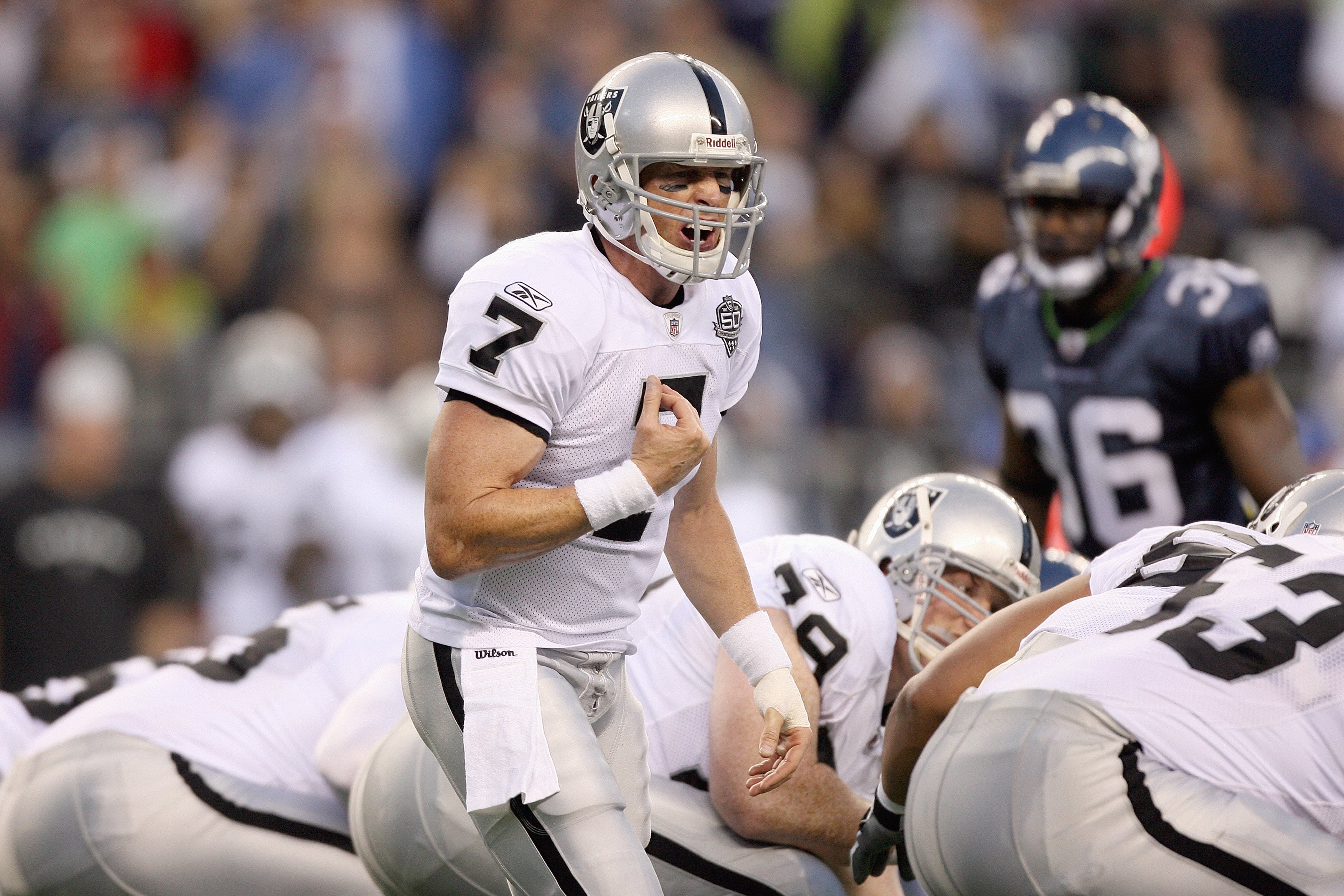 From the NFL to the UFL, former Philadelphia Eagles quarterback Jeff Garcia is used to remodeling his life, after changing teams nine times in his near seventeen year career as professional quarterback.

When both Chad Pennington and Chad Henne went down in Sunday's game against Tennessee, Jeff Garcia was one of the first names that people thought of as a possible replacement. Not only is Garcia a very capable passer, he also has a bundle of experience to his name something that Chad Pennington looked to bring to the Dolphins prior to this unfortunate event.

But for all of the experience that Jeff Garcia does have, many folks feel that the now Omaha Nighthawk is growing a little long in the tooth.  As I mentioned, a seventeen year career doesn't exactly match Brett Favre's efforts, but it is a lengthy time under center - a factor that the Dolphins must take into account when looking over Garcia's record.

Also on the topic of age, is Jeff Garcia's recent injury.  For those of you who don't follow the UFL, Jeff Garcia is once again struggling with a calf injury, a factor that has followed the former Eagle for much of his late career.

This is an option for the Dolphins to consider, but at the end of the day it is one that will require a lot of effort.  Convincing the Omaha Nighthawks to release Garcia is one thing, but also convincing head coach Steve Spagnuolo to roll the dice on a risky quarterback is another.

It's an option to keep in mind, but not one to hold your breath on. 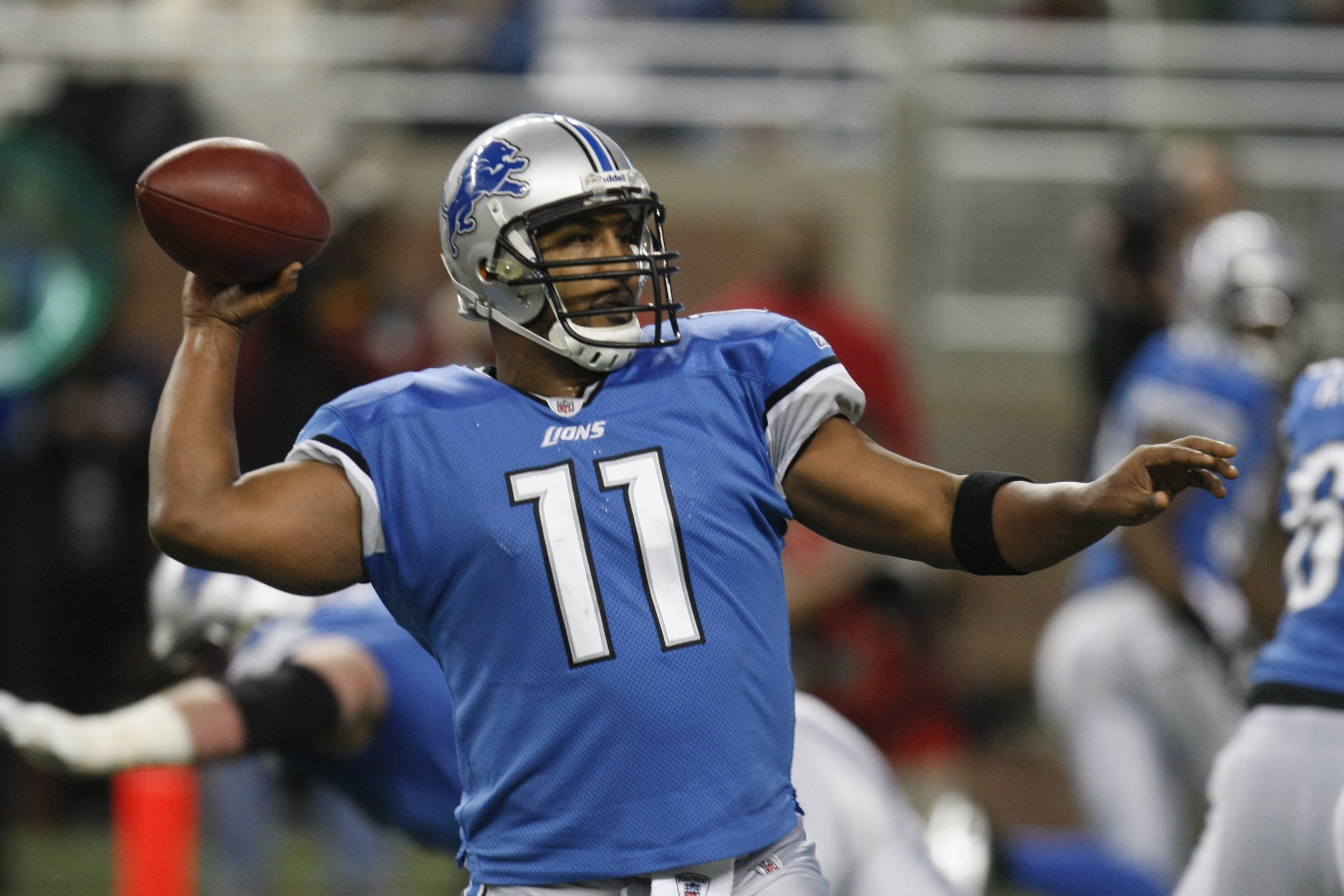 Sticking with the theme of the UFL, the name Daunte Culpepper has also jumped out from the woodwork, as NFL fans remember Culpepper's efforts with the Detroit Lions over a season ago.

In 2009, Daunte Culpepper was far from stellar during his time under Jim Schwartz.  After playing a major role in what was deemed as one of the Lions "Biggest defeats in history", Daunte Culpepper was benched against the Baltimore Ravens, and replaced with back up Drew Stanton midway through the game.

So why would the Miami Dolphins take a big time risk in signing Daunte Culpepper?

Luckily for all Dolphins fans, there is no realistic reason for even thinking twice about Culpepper's skills.  Right now the former Lion seems happy with his UFL team the Sacramento Mountain Lions, and if Detroit were willing to bring in a player from a separate league entirely, its arguable to say that Jeff Garcia would be the better option.

Don't get me wrong here, Daunte Culpepper brings some minor points to the table.  At times he can be a decent quarterback, and perhaps with the right receivers around him, Culpepper could produce some wins over time.

Still, his track record in the NFL isn't great, and the Dolphins don't need to bite off more than they can chew in this situation. 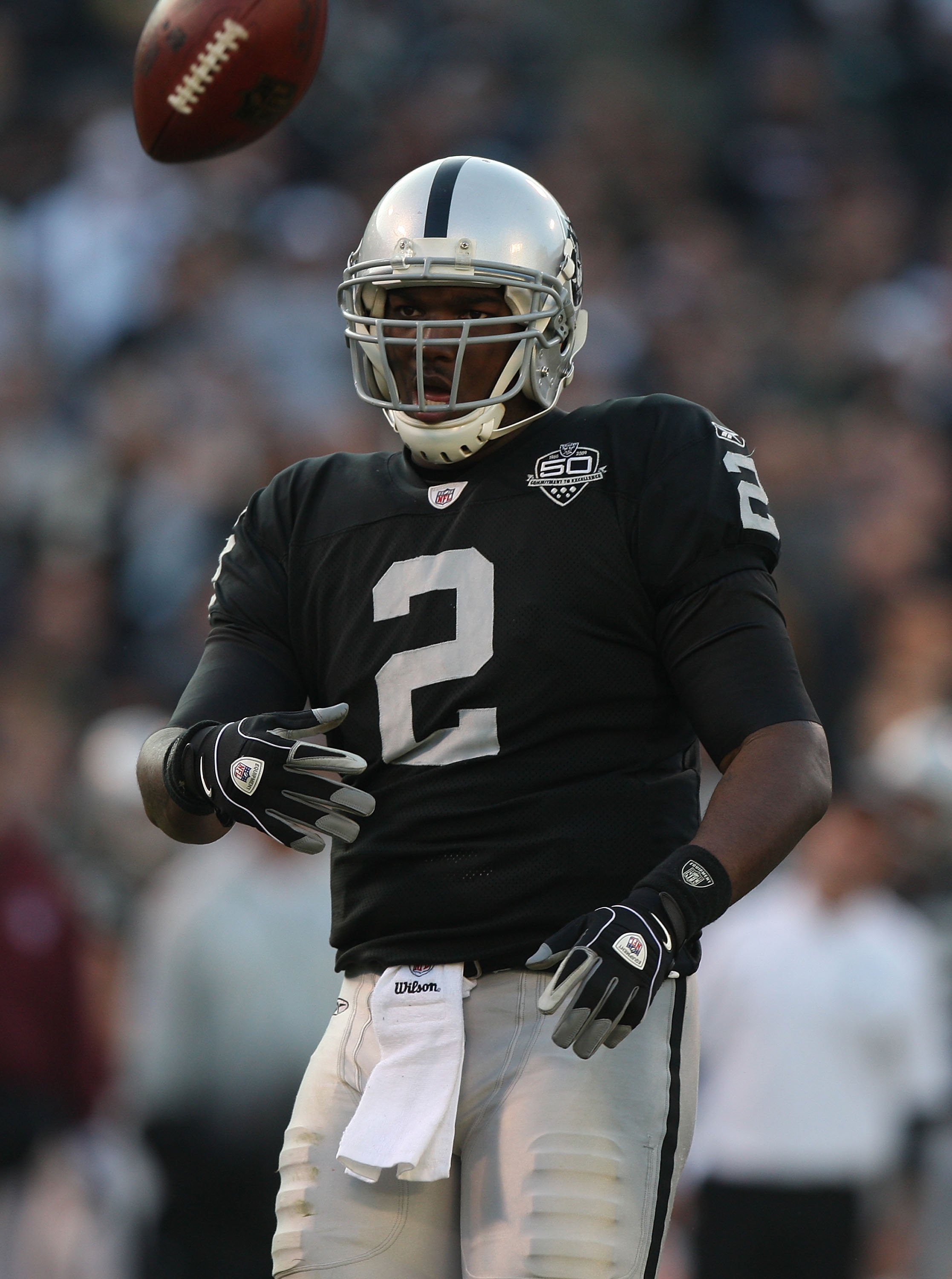 The more realistic option?  It sure does seem that way.

Yes, believe it or not the Miami Dolphins are actually considering signing JaMarcus Russell from the free agency pool, after the Oakland Raiders cut No.2 earlier this year, due to inconsistencies on and off the playing field.

What JaMarcus Russell brings to the playing field is simple.  A deep arm and an ability to possibly boost a team to a win over a big name opponent, if all things go right during the course of a game.

I guess looking at these statistics, JaMarcus Russell hasn't done himself any favors.  However, at the same time the Miami Dolphins seem to be convinced that Russell is one of the main contenders for the starting role, as the team plans to talk to him later on this week.

If you're a hater of Russell (and there are many out there), chances are you hate even the thought of this possibility.  Still, the fact remains the same, Jamarcus Russell is a young quarterback, and the Dolphins are looking to be the first team to give him a second chance at kicking his career off on the right foot.

We'll keep an eye on how this story progresses, and chances are Tyler Thigpen will give JaMarcus Russell a run for his money.  In the mean time, try and stay positive about what Russell has to offer, I know this is easier said than done though. 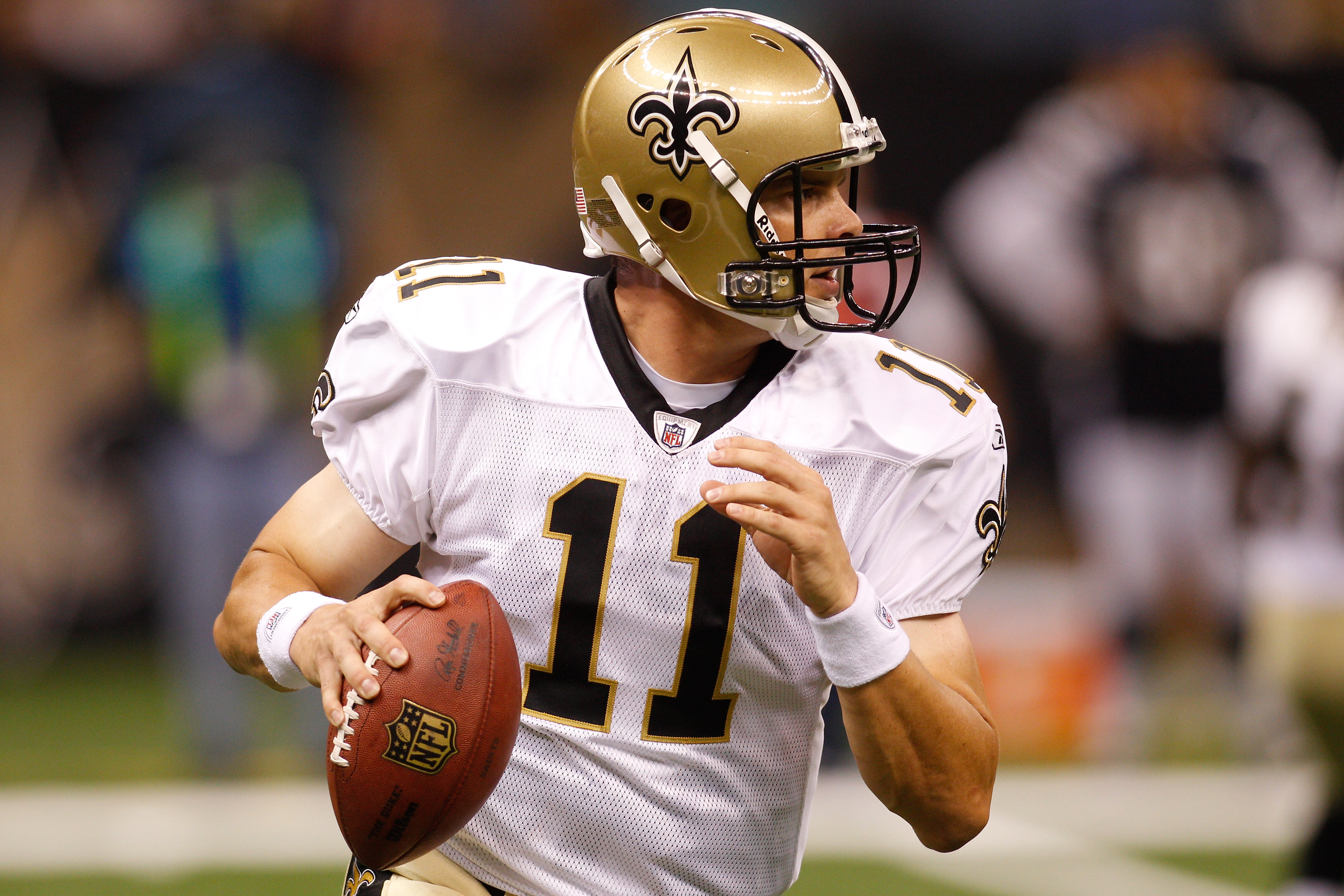 Another free agent cracks this list, as former New Orleans Saints back up quarterback Patrick Ramsey has been placed in the "possibility" pile for the Miami Dolphins right now.

If you rewind to the Jacksonville Jaguars situation several weeks ago, when David Garrard went down with an injury, head coach Jack Del Rio showed no hesitation to get in contact with Patrick Ramsey and sign the free agent.

So what is stopping the Dolphins from doing the very same?

The main positive to come from Patrick Ramsey's acquaintances is the fact that he has come from a good home.  No, he hasn't been in the starting role for quite some time, but the fact that he is a product of Sean Payton says a lot for any team considering him.

Chances are that the Jaguars won't let Ramsey go just yet, after all Jacksonville's season is still very much alive.  But if the Dolphins are serious on him, they may offer up some kind of check for Ramsey's ability. 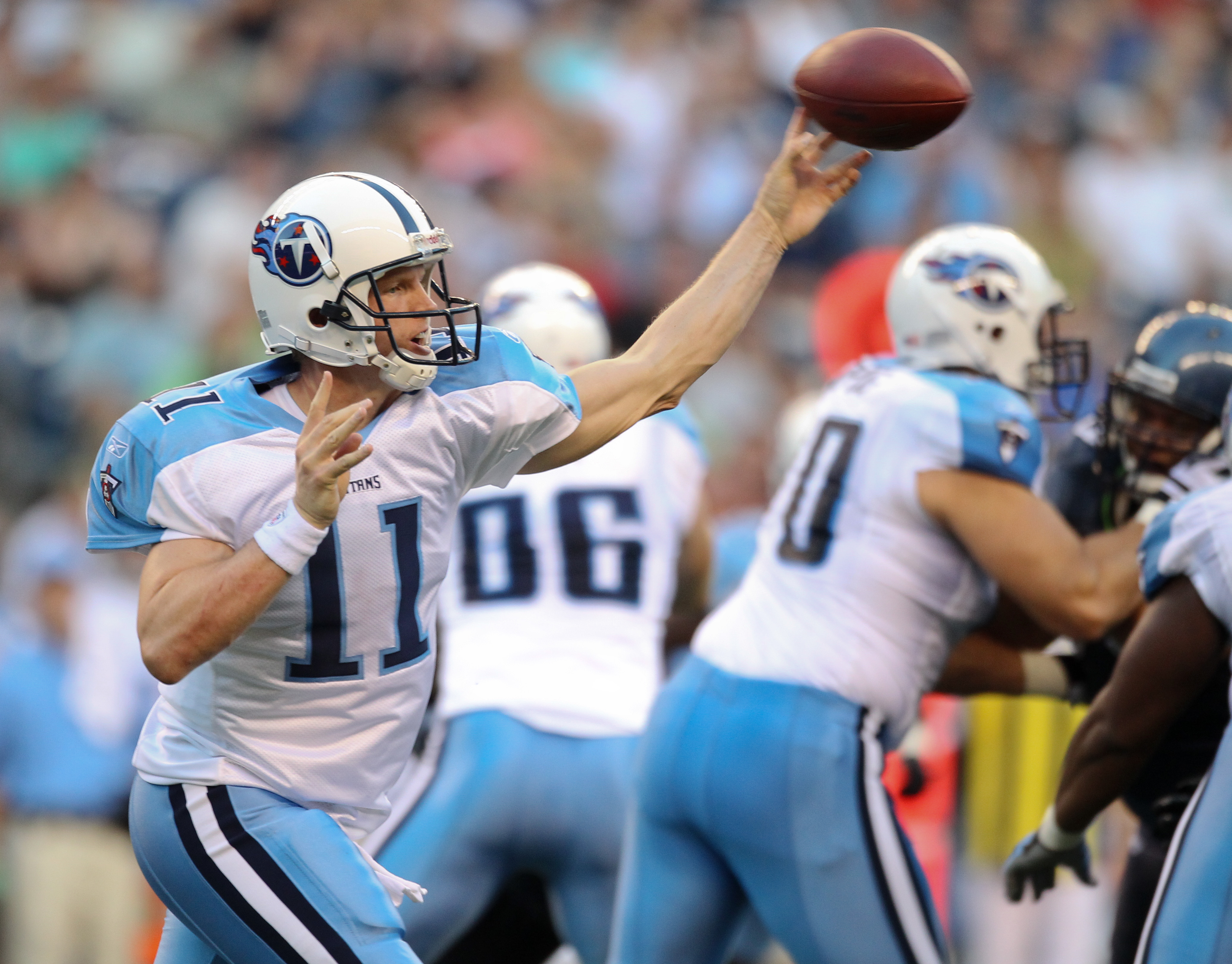 Released by the Tennessee Titans and now sitting on the free agency list, controversial quarterback Chris Simms is once again another potential option for the Miami Dolphins.

For all that could be said about Chris Simms, his eight years of experience in the NFL act as a mild bonus ahead of his marijuana allegations.  What is more impressive though, is the fact that Chris Simms does have 3,117 yards and 12 touchdowns to his name, something that can't be said for all players on this list.

On the unfortunate side for Chris Simms though, the Dolphins haven't shown much consideration toward his advances.  Maybe the criticism has shied Tony Sparano away, or perhaps the fact that no one has snapped Chris Simms up from free agency doesn't act as a very promising sign.

Either way, Simms is still a possibility, and even though he hasn't had much experience lately under center, he could be a quick pick option for the Dolphins if all else falls through. 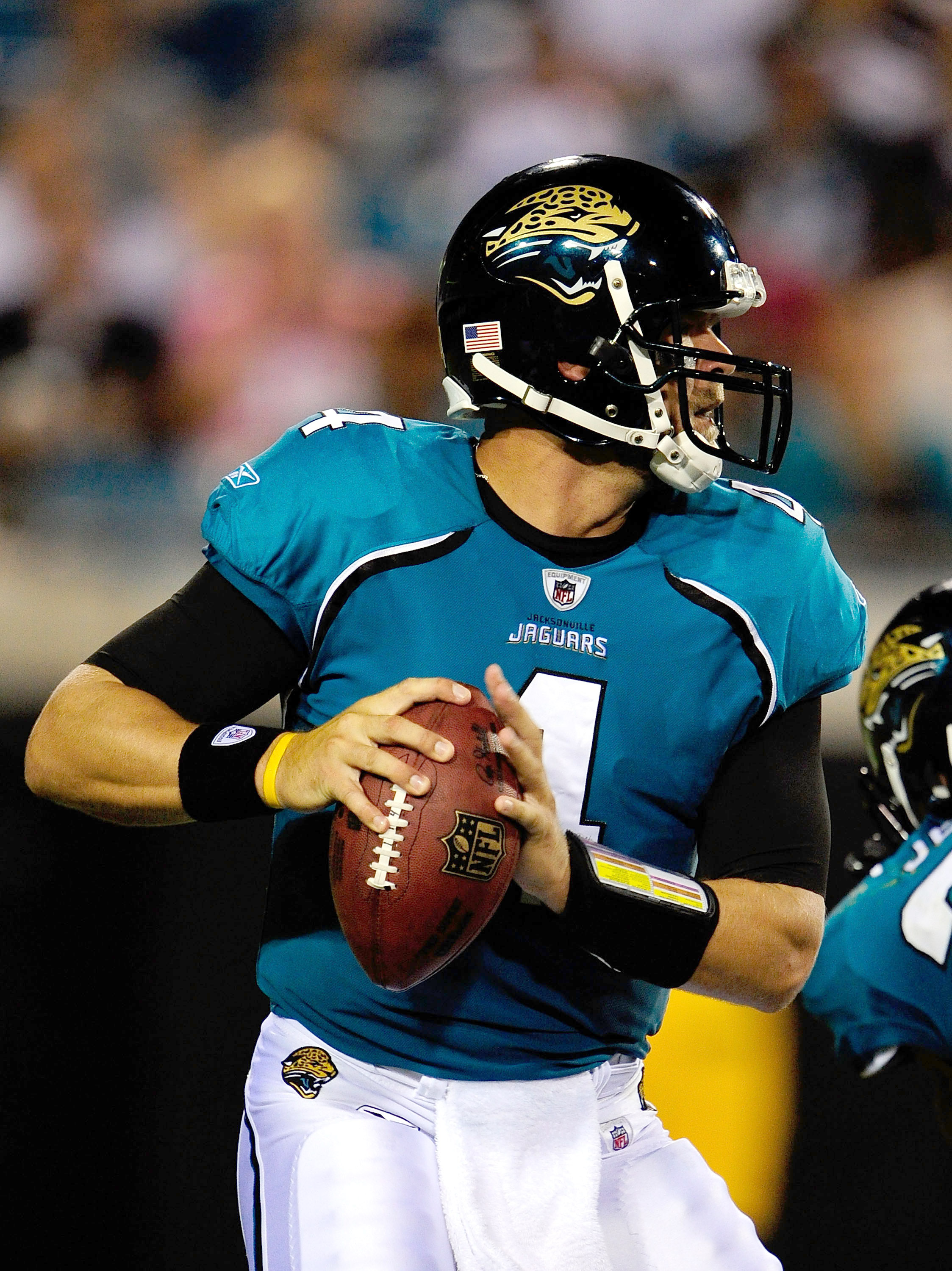 Jacksonville Jaguars quarterback Todd Bouman won't be the easiest player to snag for the Dolphins, but if Miami are successful in gaining No.4, he will certainly be ready to produce at the drop of a hat.

By looking at Todd Bouman's statistics, his resume isn't overly impressive.  The number 2 pops up a lot, and after throwing for 222 yards, 2 touchdowns and 2 interceptions on the year, Bouman hasn't made the most of his opportunities in Jacksonville.

That isn't to say however, that he can't redeem himself by signing with the Dolphins.

But what are the chances of this happening?

Quite frankly, they aren't that high.  The Jaguars are the type of team who are comfortable right now, and head coach Jack Del Rio is quite happy to leave Todd Bouman in the back up spot, especially if David Garrard falls for the second time this season.

Maybe like Patrick Ramsey, a pay check or two could convince the Jaguars one way or another.  While there are so many other options on the board though, Bouman isn't a priority just yet. 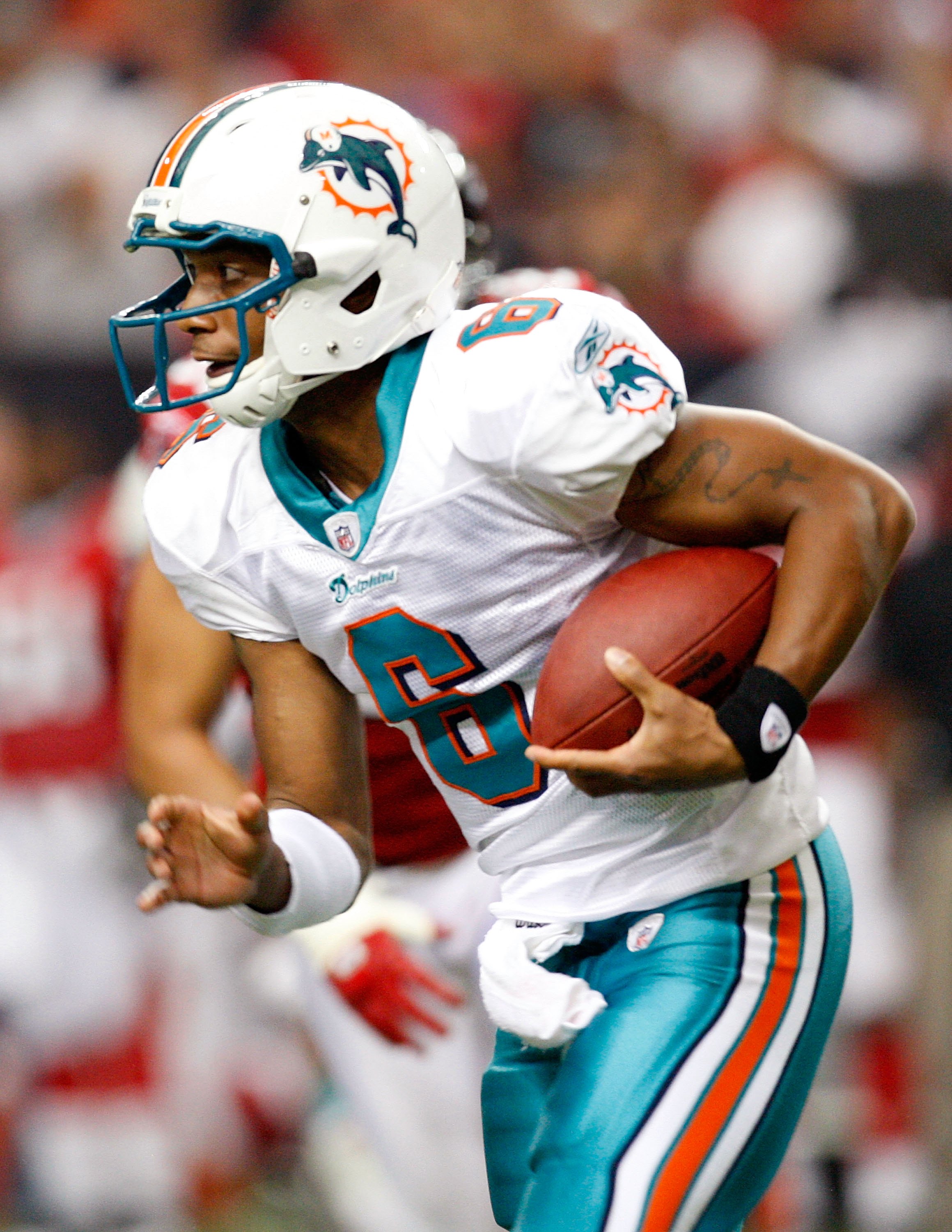 If JaMarcus Russell is a distinct possibility, then surely former Miami Dolphins quarterback Pat White offers up some positive points of his own.

Just like Jeff Garcia and Daunte Culpepper, convincing Pat White to leave his love of baseball, and more importantly the Kansas City Royals, may be a tough task for the Dolphins to undergo.  What may convince Pat White to come back down South though, is a guaranteed starting role, that White so often seeked during his original time with the Dolphins.

The main appeal surrounding Pat White is fairly straight forward.  Not only does No.6 have a decent throwing arm, his prolific speed also compliments  his abilities, even though there are few highlights available to further validate this point.

But unlike Jeff Garcia and Daunte Culpepper, Pat White has gone to a completely different sport entirely, and doesn't appear to be looking back.

It's questionable to say, but perhaps Pat White's 2009 head clash with Ike Taylor that left him unconscious, doesn't leave him with loving memories of the NFL or professional football in general.

Maybe if Pat White can put all of this aside though, he will come back.  The MLB season is down and out until March, and seeing as though White is still only young, the possibilities are endless if he returns to the NFL. 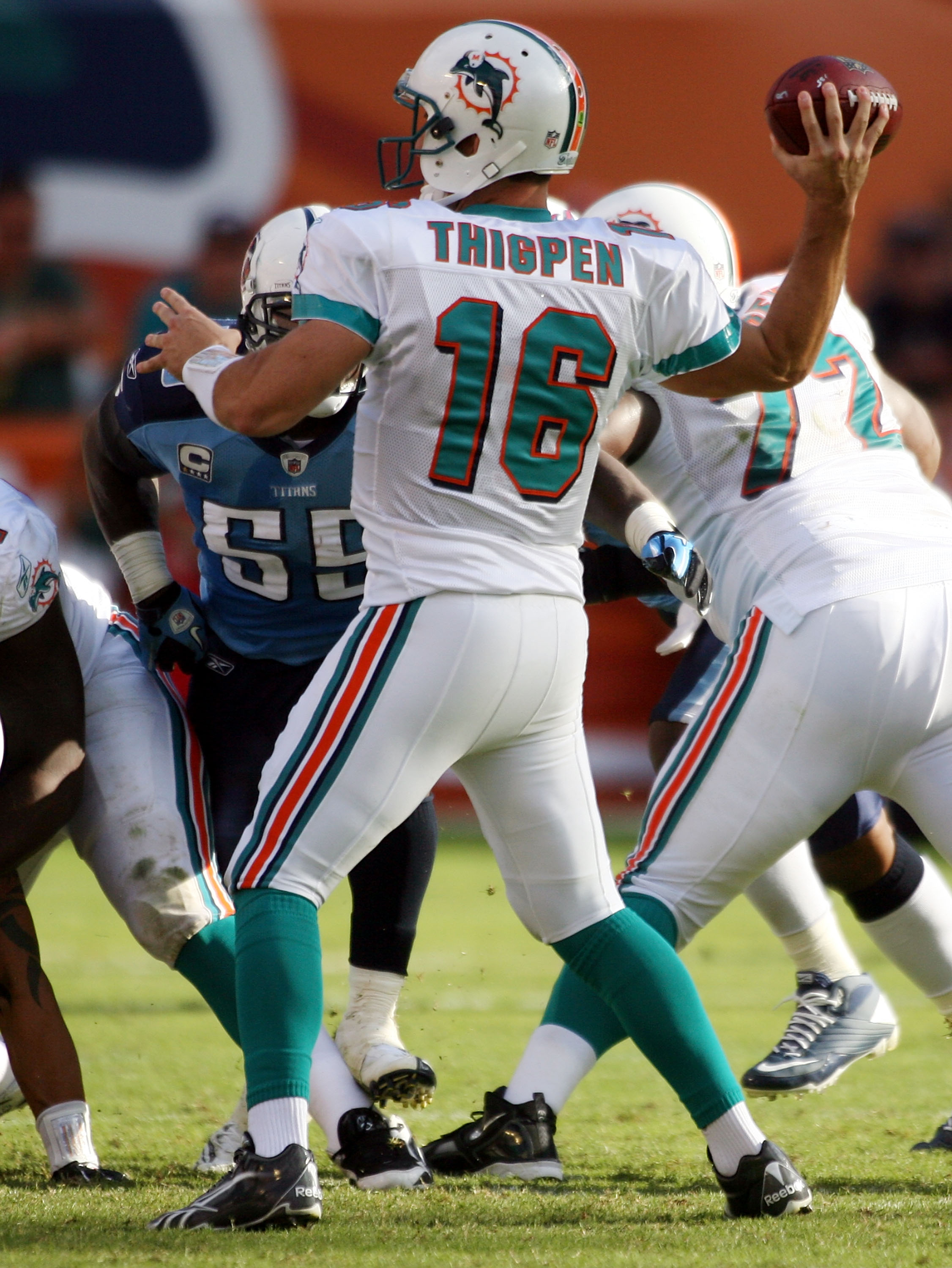 When Chad Pennington and Chad Henne went down on Sunday with injuries , No.16 Tyler Thigpen stepped in, and dare I say it, the third string player did a decent job of securing the win for the Dolphins late in the forth quarter.

On the day against Tennessee, Thigpen threw for 64 yards and 1 touchdown during the forth, and managed to maintain composure after being thrown into a sticky situation, just after the half time mark.

To add the icing on the cake for Tyler Thigpen's case, the one thing that Thigpen has going for him is team chemistry.  Given that Thigpen rarely ever sees the field, he at least knows the Dolphins roster on a friendly basis, unlike Jeff Garcia, Daunte Culpepper and JaMarcus Russell.

Yes, Tyler Thigpen's skills are questionable, and it's tough to determine a whole lot out of one measly forth quarter performance.  However, Thigpen is the closest option for the Dolphins, and quite possibly the most sensible at the end of the day.

One last factor to keep in mind for Tyler Thigpen is his 2008 season.  At the time No.16 was with the Kansas City Chiefs, but through the thick of this whole situation, Thigpen's 2,608 yards and 18 touchdowns with a very struggling team seem to go unnoticed.

Should Tyler Thigpen get back to these statistics, or show this kind of form, he may eventually win the starting role in Miami.  For now though, he is the best option for the Dolphins heading toward Week 11, against the Chicago Bears.