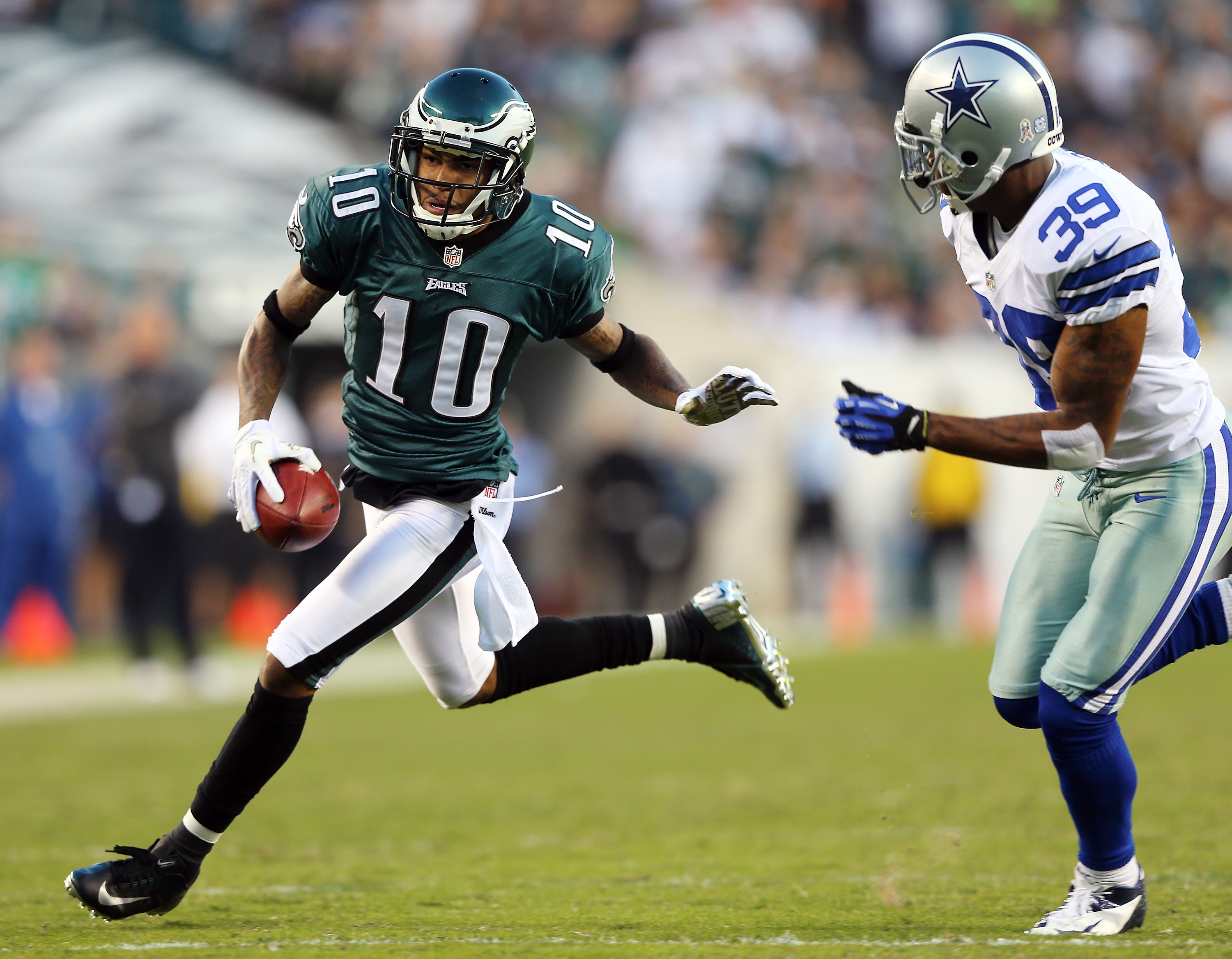 Premature celebrations in sports provide incredible theater for fans while making utter fools out of their heroes.

No matter the sport, it's impossible not to laugh at athletes who begin to carry on, only to realize they don't actually have anything to celebrate.

And no matter how many times we see it happen, it never gets old.

Sometimes it's just more fun to be cocky than conscious.

Here's a look at 25 of the most hysterical and ill-conceived premature celebrations in sports.

Let's start out in hilarious fashion.

Goalkeeper Khalid Askari made a decent diving stop on a penalty kick, then sauntered over to the side of the net while the ball kept spinning.

He didn't realize it right away, but the ball had managed to spin all the way into the net.

No. 24: Too Premature and Much Too Long

If anything, this celebration took too long to materialize.

The end result was an uncontested goal by the opposing team.

Not funny, and not very smart either.

No. 23: Vincent Jackson Spins It Forward 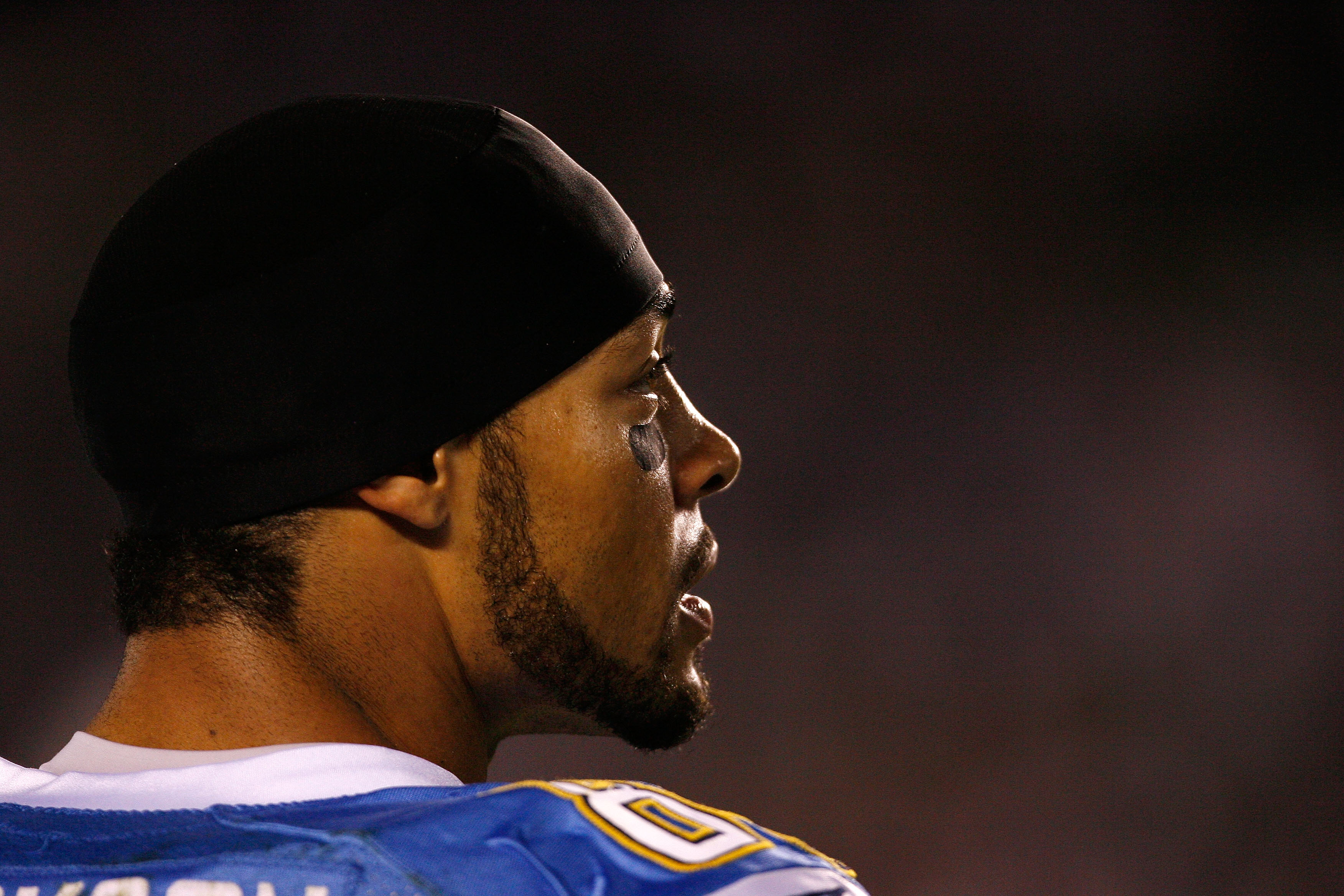 I can't find any quality video for this, but Chargers receiver Vincent Jackson had everyone spinning when he spun the ball after making a catch against the Raiders in 2006.

Jackson caught a pass on fourth-and-two to give San Diego a first down. But he went to the ground without being touched and spun the ball forward.

Then the chaos ensued.

The Raiders jumped on the ball, believing they had recovered a fumble. Eventually, the Chargers were penalized for an illegal forward pass but allowed to keep possession.

The Chargers would go on to score later in the drive, helping get their star receiver off the hook.

No. 22: Bill Gramatica Blows Out His Knee

Why was Bill Gramatica so happy?

Bill, not to be confused with fellow kicker (and irritant) brother Martin, kicked this meaningless field goal against the Giants and leaped into the air.

He came down with a torn ACL.

No. 21: Jake Locker Draws a Penalty at the Wrong Time

The merits of this play actually being deserving of a penalty can certainly be debated.

After running in a touchdown with two seconds remaining, Locker flipped the ball high into the air and was mobbed by his teammates.

His natural act of emotion didn't appear to be overly excessive.

Regardless, Jake Locker's act of celebration drew a 15-yard penalty that led to a long extra point try by the Huskies, with a chance to tie No. 15 BYU at home.

The kick was blocked, giving Washington a heartbreaking loss. 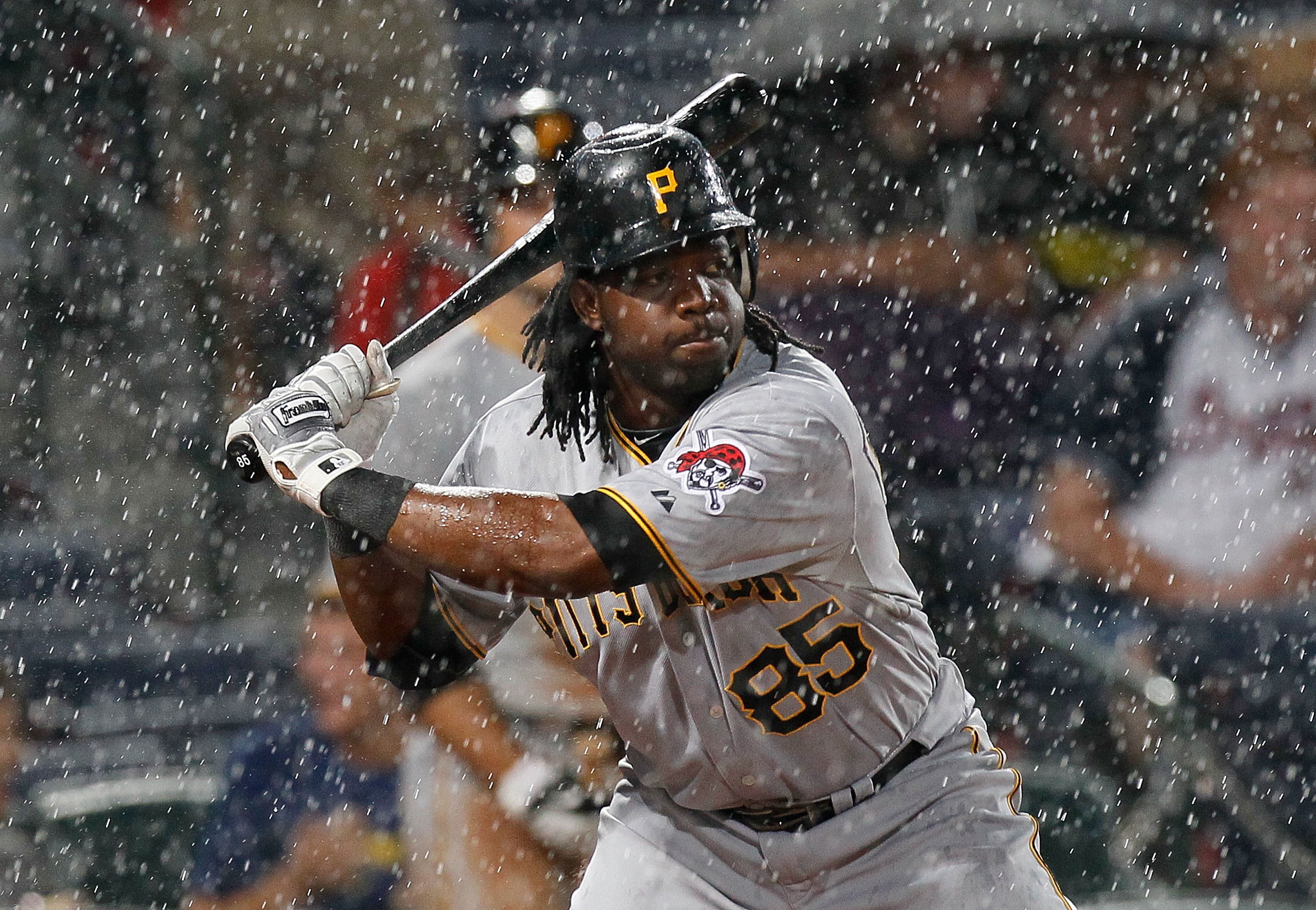 Lastings Milledge thought he had belted a home run against the Cubs.

So did the Pirates announcers and whoever operates the fireworks at PNC Park.

Instead, he had merely hit a long fly ball off the left-field wall.

It might be surprising to some that Alfonso Soriano noticed the ball stayed in the park.

You can watch the video here.

No. 19: Usain Bolt Celebrates in Style

Usain Bolt's famous 9.69 time in the 100 meters could have been even faster had he not broke into a celebration before he crossed the finish line.

The World's Fastest Man joined David Letterman to discuss his antics in Beijing.

Imagine what he could have done had he been able to contain himself for a few more seconds.

Note: The clip of the race itself appears at the beginning of this video.

No. 18: Chad Johnson Gets Away With One for Oregon State

After hauling in a short pass in the 2000 Fiesta Bowl, Johnson turned up field and headed for the end zone, only to drop the ball at the two-yard line.

It wasn't a big deal, because none of the officials noticed his mistake.

That certainly wasn't the last celebration that didn't work out well for Ochocinco.

Note: The clip appears at the 15-second mark of this video.

No. 17: Marathon Runner Forgets to Watch Her Back

It was a hot day in Chicago in 2007 and Romania's Adriana Pirtea had a considerable lead in the women's marathon field.

Thinking she had no reason to worry, she slowed up and started giving high-fives to the crowd.

Ethiopia's Berhane Adere ran right by her, and Pirtea didn't have enough left in the tank to catch back up.

This video is pretty incredible, to say the least.

No. 16: Patrick Stefan Gets Ahead of Himself

Patrick Stefan had a chance to ice the game for Dallas against Edmonton, coasting towards the open net in the closing seconds.

He didn't and the Oilers promptly gave up the game-tying goal with two seconds remaining.

The announcer said it best:

"Patrick Stefan, you should be ashamed of yourself."

No. 15: Tom Benson Needs to Get His Eyes Checked

It was a magical 2009 season for the Saints, filled with great finishes and capped off by a Super Bowl title.

And for Saints' owner Tom Benson, it was magical enough to celebrate missed field goals.

He must not have had a great angle on this play.

No. 14: Mark Martin Goes to Victory Lane a Little Early

With the final laps of Goody's 250 being raced under caution, all Mark Martin had to do was hope he didn't run out of gas or blow a tire.

Oh, and he also had to stay on the track.

Instead, Martin headed to the pits in preparation for the victory celebration, thinking the race was already over.

It didn't quite work out that way.

No. 13: Lindsey Jacobellis Overdoes It a Bit

Jacobellis was coasting to the Gold in snowboard cross in the 2006 Olympic Games.

All she had to do was stay on her feet.

Instead, she crashed near the finish and had to settle for the Silver.

That certainly wasn't the only time she gave away the lead.

Thanks to an abundance of timeouts, premature celebrations are a bit more unusual in basketball.

Unusual, but not unprecedented.

Virginia Tech had all but beaten Xavier, but the Hokies froze after scoring the go-ahead layup in the closing seconds.

Meanwhile, Xavier inbounded the ball and Jackson had an easy look at a half-court shot.

NOTE: The clip appears at the 1:50 mark of this video.

No. 11: Arizona Floods the Field

Arizona needed an upset in the worst way. Its fans were ready to rush the field in Tucson with Oregon on the ropes.

But as the Ducks moved into scoring position, the fans continued to creep ever-closer to the field of play.

NOTE: The madness begins around the 7:50 mark of the video.

Sadly, YouTube wasn't around in 1957 to document one of the most hilarious premature celebrations sports has ever known.

With a slim lead approaching the finish at the Kentucky Derby, jockey Bill Shoemaker stood up on his mount, Gallant Man, thinking he had already crossed the finish line.

His mistake opened the door for Iron Leige.

Here's a nice profile of the legendary jockey, including his brain cramp on that fateful day.

Note: Shoemaker explains his mistake beginning at around the three-minute mark of this video. 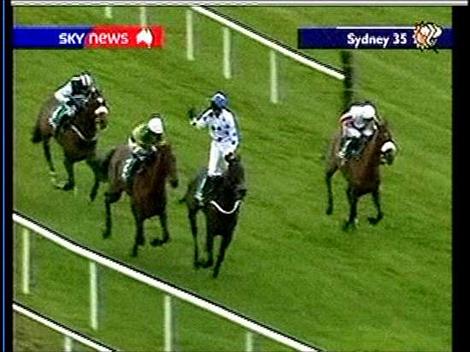 Jockey Roger Loughran had a little issue during a race in Ireland a couple years back.

Thinking the race was over, Loughran stood up and began swinging his whip in the air.

The problem is, there were three lengths left before he crossed the finish.

You can watch the video here.

What a disaster, indeed.

No. 8: Keep Your Balance

No idea where exactly this race took place, but this unfortunate fellow believed he had things all wrapped up.

Despite the rainy conditions, he raised his hands in the air and promptly fell on his face.

At least he had the heart to continue.

No. 7: DeSean Jackson Comes Up Empty

DeSean Jackson's history of botched celebrations extends all the way back to his high school days.

During the U.S. Army All-Star game, Jackson was heading to the end zone when he decided to do a cartwheel.

His flip fell a little bit short of the goal line and left the ball lying on the turf.

Don't worry, there's more from DeSean right around the corner.

Dwayne Rudd got way too excited when he thought his Browns had outlasted the Chiefs in a wild game.

He not only stopped watching the ball, but he threw his helmet in celebration.

Meanwhile, a Chiefs tackle was rumbling down the field in the other direction as the officials were throwing flags.

Rudd was hit with a personal foul, giving the Chiefs another down even though time had expired.

This is one of the craziest finishes you will ever see.

In fact, it doesn't even look real.

After Cibona canned a three-pointer to take the lead, the celebration began despite time remaining on the clock.

Almost nobody noticed when Partizan buried a half-court shot to beat Cibona in shocking fashion.

NOTE: The insanity begins around the 3:15 mark of this video.

Replays quickly showed he had, in fact, dropped the ball before crossing the goal line.

Leon Lett's Super Bowl blunder was absolutely incredible, mainly because everybody in the world saw Don Beebe giving pursuit as Lett trotted towards the end zone.

Needless to say, Lett has never lived that play down.

Here's a nice look at that play and Leon's other fateful mistake.

"The Play" has been on top of just about every single countdown every since it unfolded on that afternoon in 1982.

For a change, let's bump it down a notch.

"The band is out on the field, he's gonna go into the end zone!"

It's just not a good idea to rush the field until the game is over.

No. 1: The Bluegrass Miracle

Jared Lorenzen and Kentucky had managed to take a lead on LSU with just 11 seconds remaining and appeared headed for victory.

Embattled Wildcats head coach Guy Morriss got a Gatorade bath and the fans crept closer towards the field.

But the Tigers saved their best for last.

Marcus Randall launched a Hail Mary downfield, and after being deflected in at least two different directions, the ball ended up in the hands of star receiver Devery Henderson.