San Diego Chargers: 10 Roster Moves That Should Be Made During the Bye 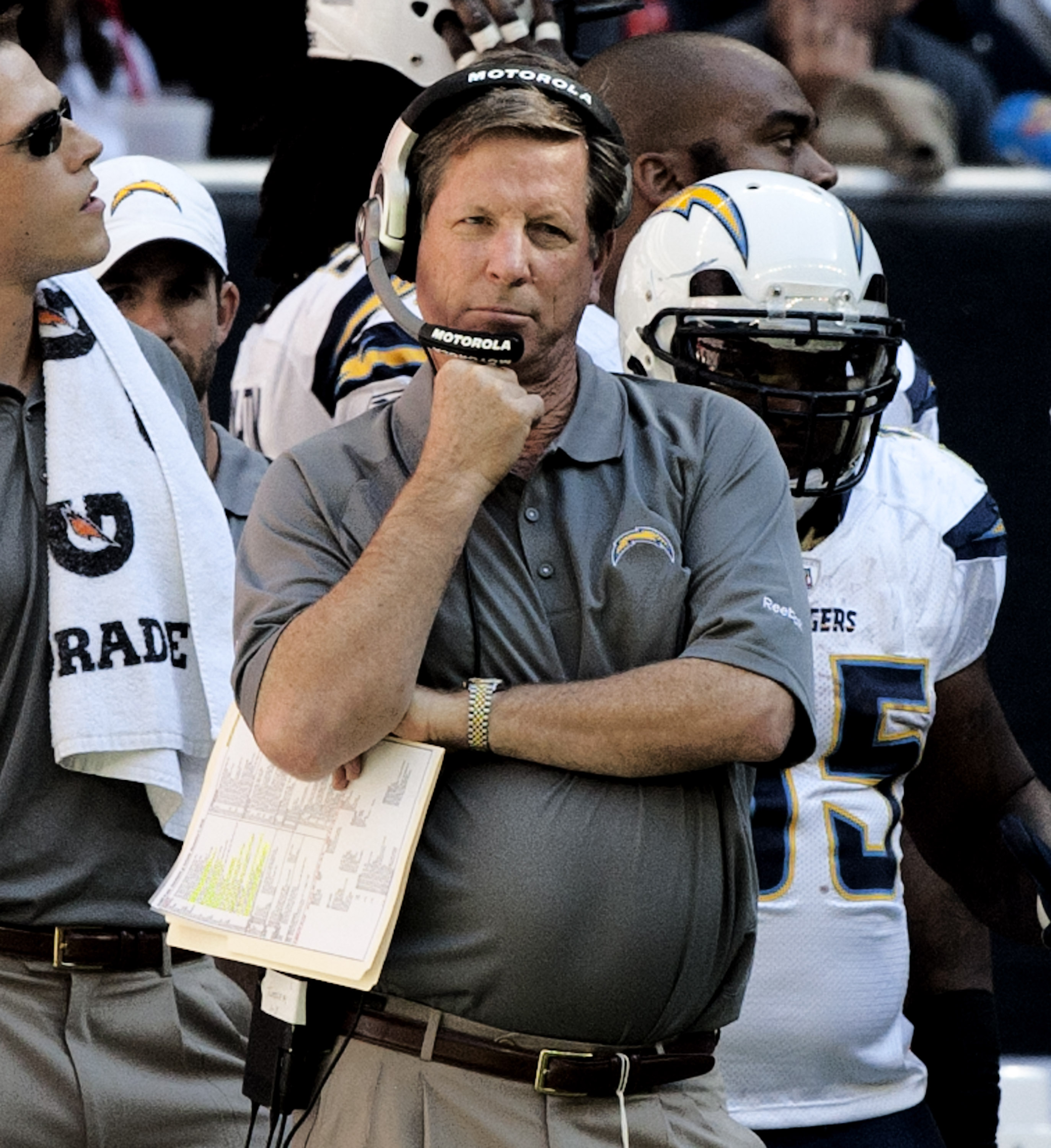 After nine weeks of NFL play, the San Diego Chargers have finally reached their bye week, and it could not come at a better time.

While the Chargers were starting to surge with two straight victories, they are banged up and still committing basic mental mistakes that need to be fixed.

Some of those fixes have to be coached out (an advantage of the extra time afforded to them by the bye week). Some of them, however, have to be solved through roster moves.

With that in mind, let's take a look at 10 roster moves that the San Diego Chargers should make in order to benefit them down the stretch this season, as well as in future seasons. 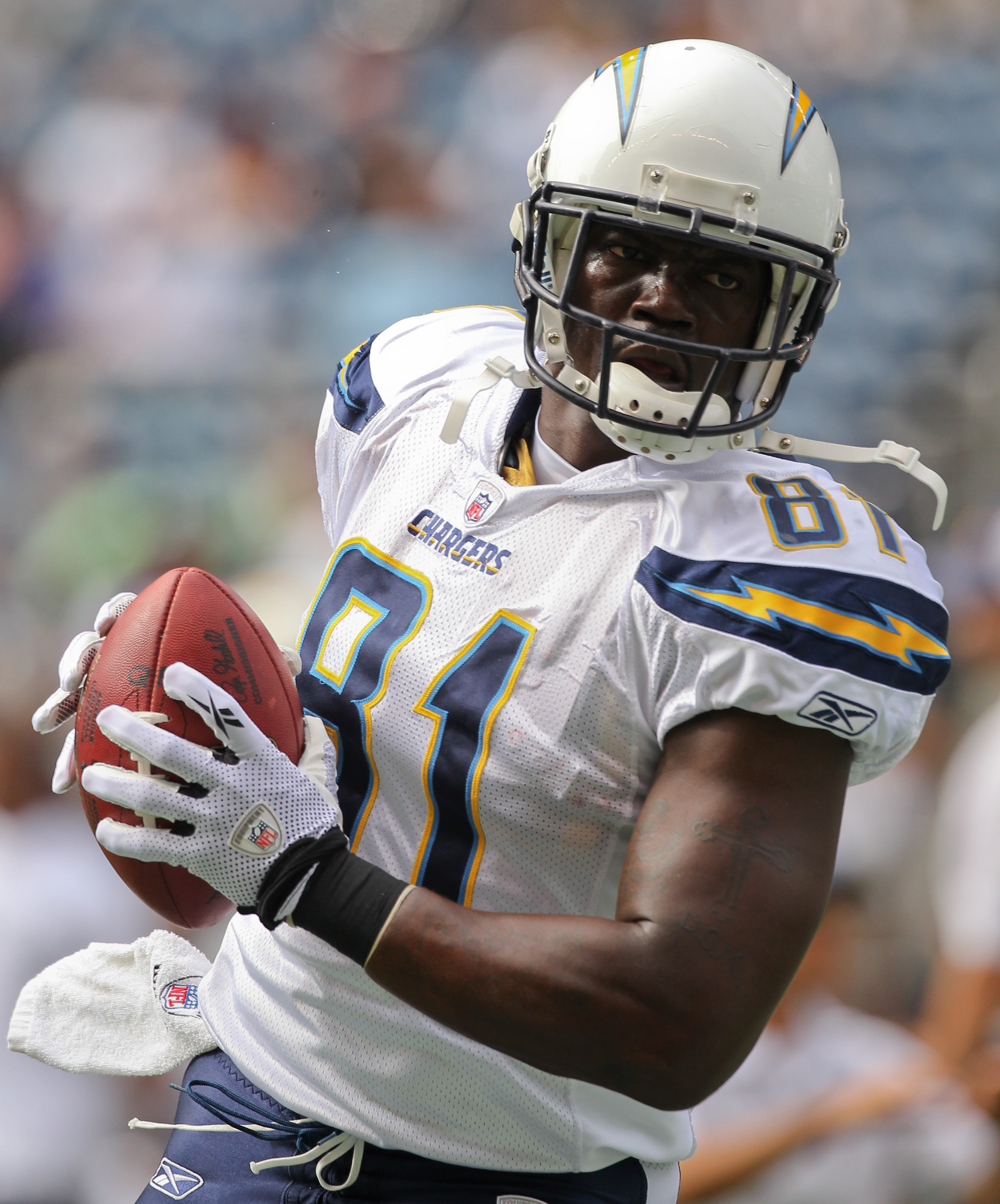 At this point, there is no reason why Randy McMichael should be cut. He has been an excellent help rotating in and playing alongside Antonio Gates, and he adds another receiving threat to the Chargers offensive arsenal.

However, he has had some major special teams gaffes, including a clear busted coverage on one of the Chargers blocked punts.

It appeared as though he was supposed to run bump-and-run coverage against his man on a kind of max coverage punt scheme, but he barely touched the defender, and thus gave up the block.

Replacing McMichael on the special teams unit wouldn't be hard. There are plenty of offensive linemen who could fill in, or the Chargers' third-string tight end Kris Wilson (who is a more polished blocker) could take over on that side. 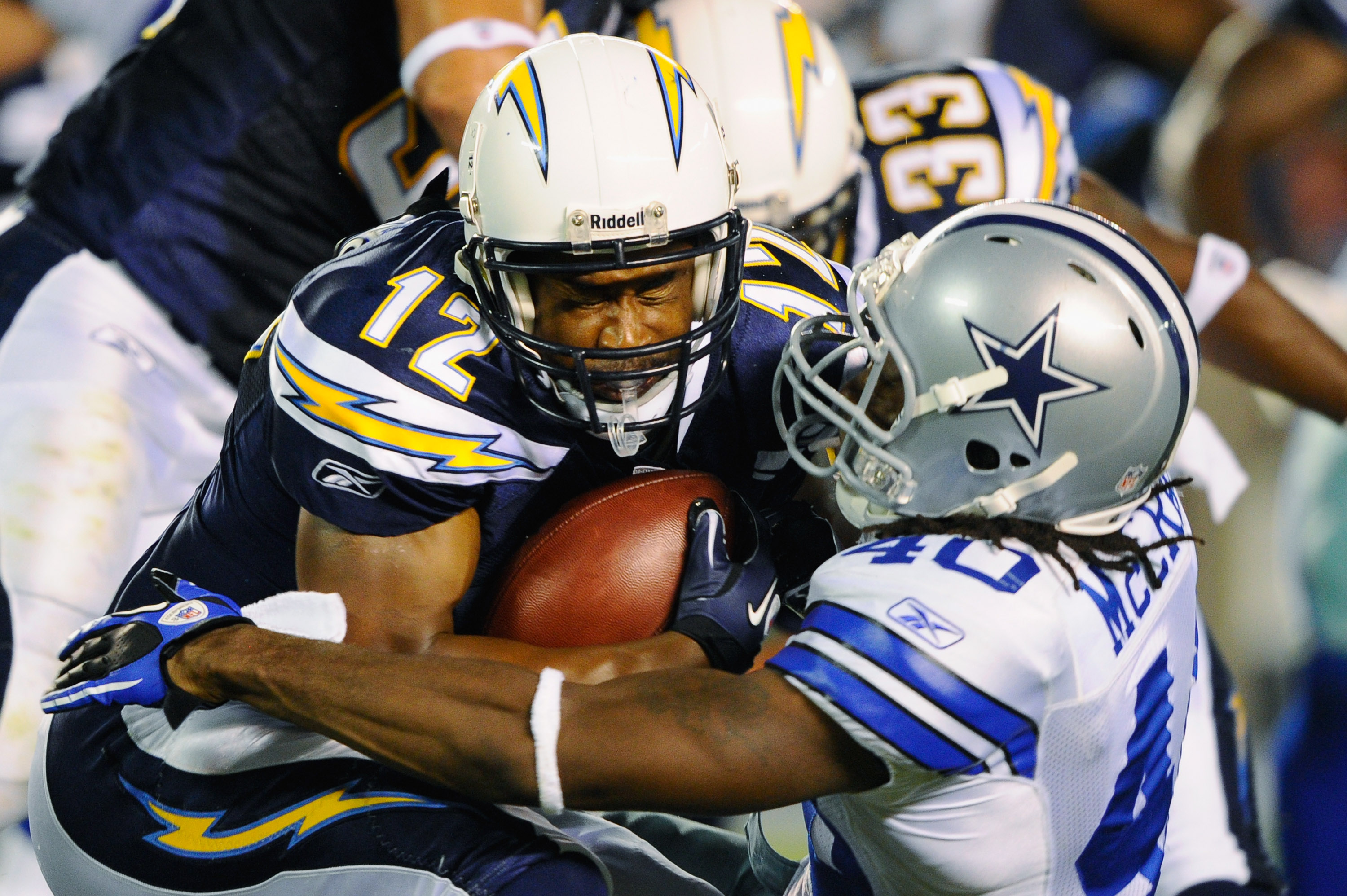 This is nothing personal against Gary Banks, but the Chargers need to prioritize which receivers they want to keep as players continue to return from injury. Once the bye is over, Malcom Floyd and Legedu Naanee should be back on the field, and Vincent Jackson will return to action one week later.

That leaves the Chargers with an extremely talented but crowded receiving corps. San Diego just simply doesn't have the room to retain Banks. 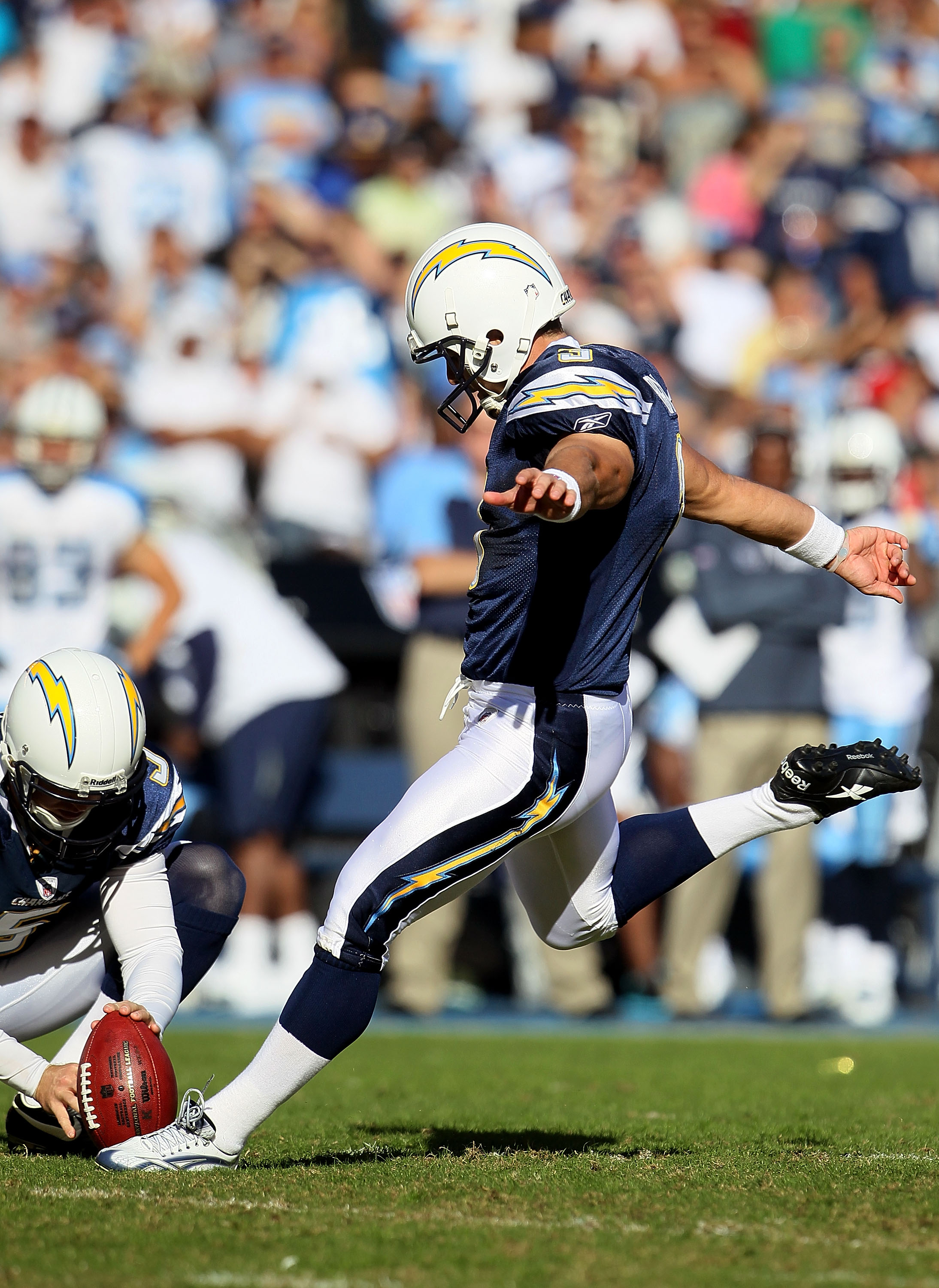 Again, it's nothing personal, but Nate Kaeding should be returning to action after the bye, and the Chargers simply do not have the roster space to afford holding onto a second kicker. 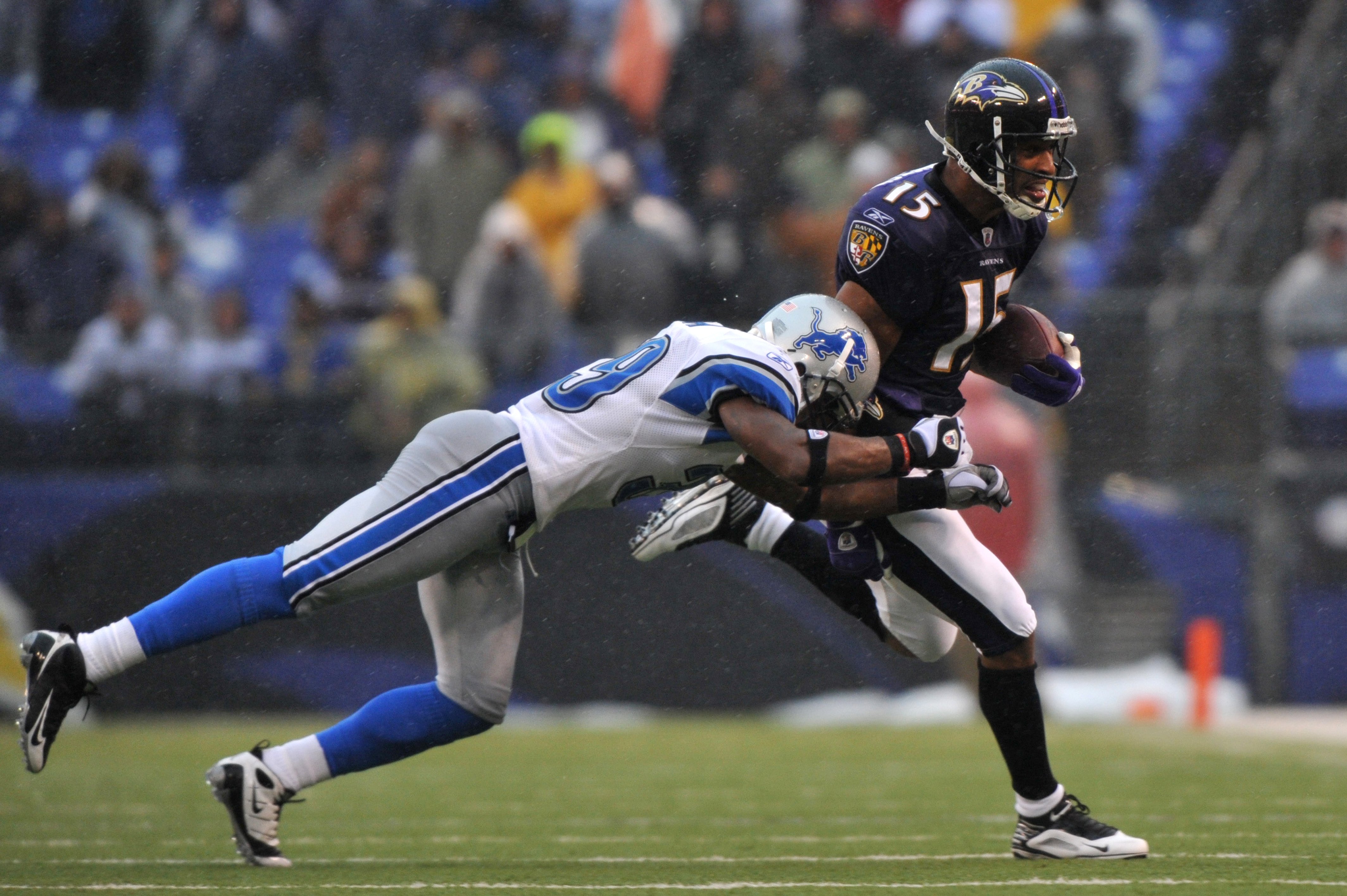 I hate to keep hitting the same beat, so I promise this will be the last 'cut this person' slide.

Essentially the same reasoning applies here as applied for Gary Banks. Washington was signed for depth, and with many receivers returning to the lineup, Washington is now obsolete. 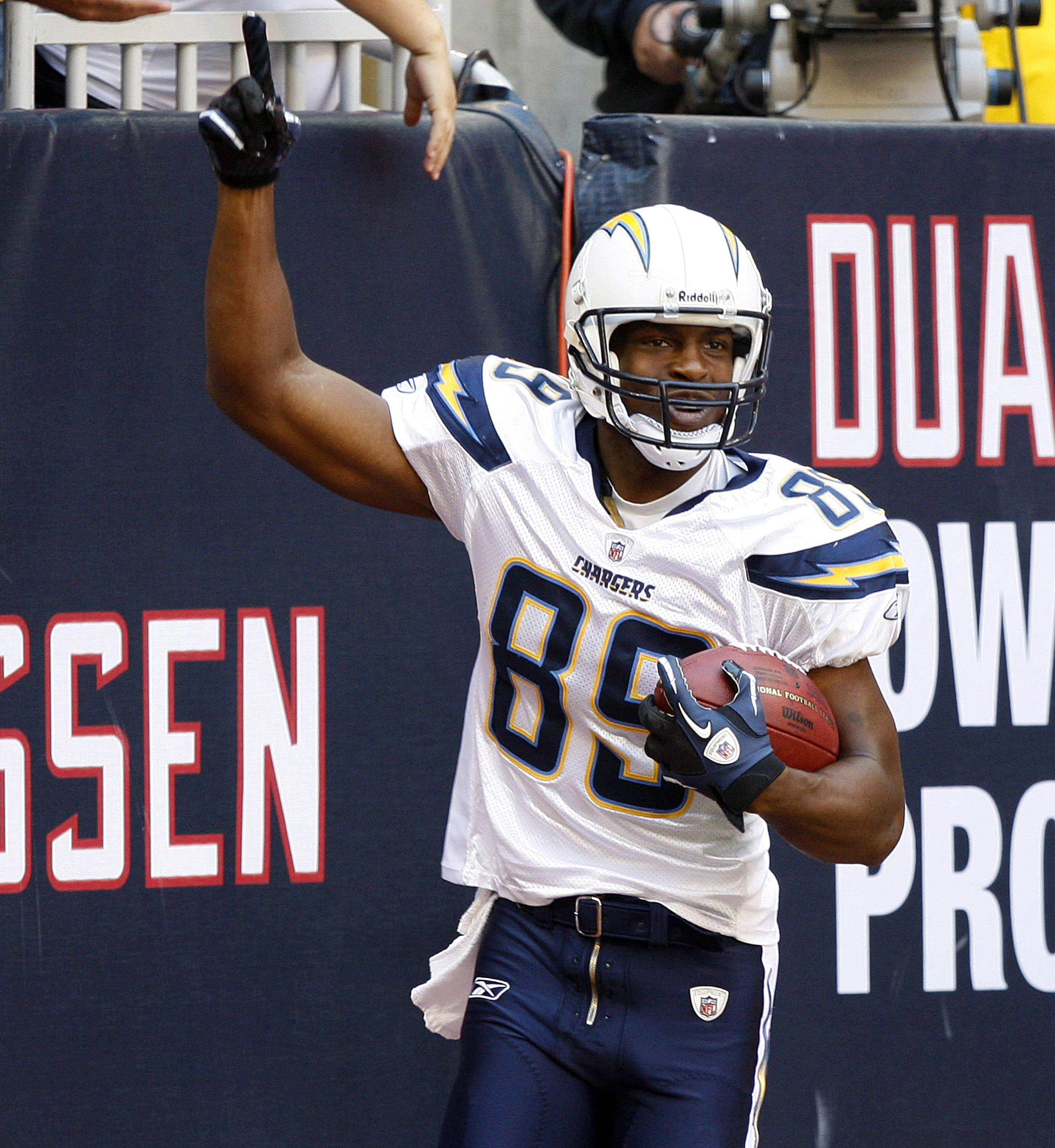 I doubt that any of you read my articles often enough to remember what I put out in the preseason, but there were several times in August and September when I was trying to advocate hard for getting Seyi Ajirotutu on the active roster.

Just look at his performance against the Texans. He had two touchdowns, both of which were just as much about his moves as it was about Philip Rivers.

I see no reason why the Chargers shouldn't sign him to at least a two or three-year deal. This kid is something special, and to relegate him to the practice squad could mean losing him to another team hunting for young talent. 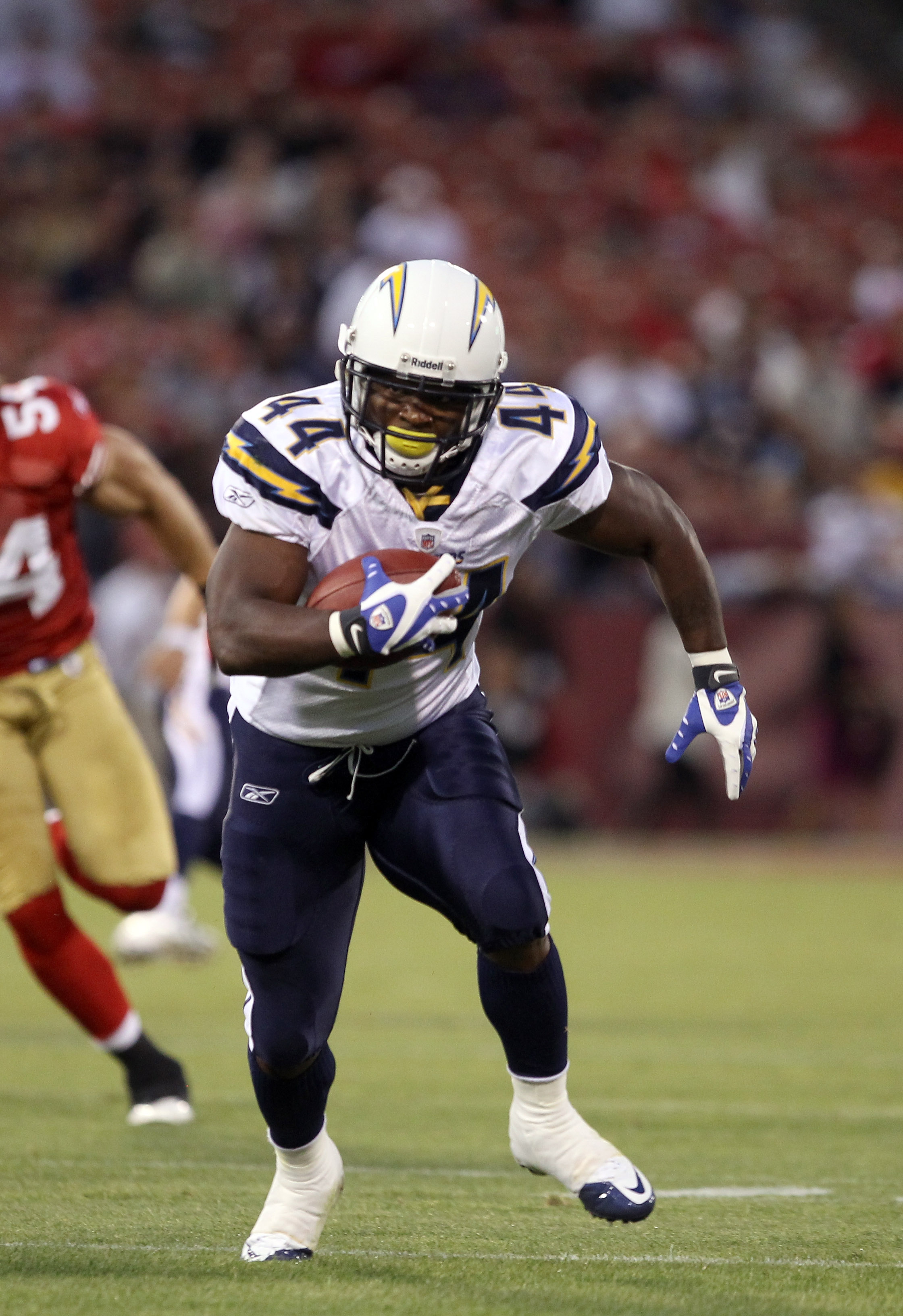 Curtis Brinkley and Seyi Ajirotutu were (and are) in the same boat for me: they are both highly undervalued players who deserve spots on the active roster.

While Ajirotutu has apparently earned that privilege, Brinkley continues to sit and wait for his opportunity to make an impact for the Chargers.

Brinkley is a very talented scat back. He is very fast, very quick, but also deceptively strong, much like Darren Sproles. However, the difference between the two seems to be production. While Darren Sproles has fizzled somewhat this year, all signs point towards Curtis Brinkley being the guy who can take over for Sproles.

Whether the roster spot has to come at the expense of Darren Sproles or not, Brinkley deserves a shot. 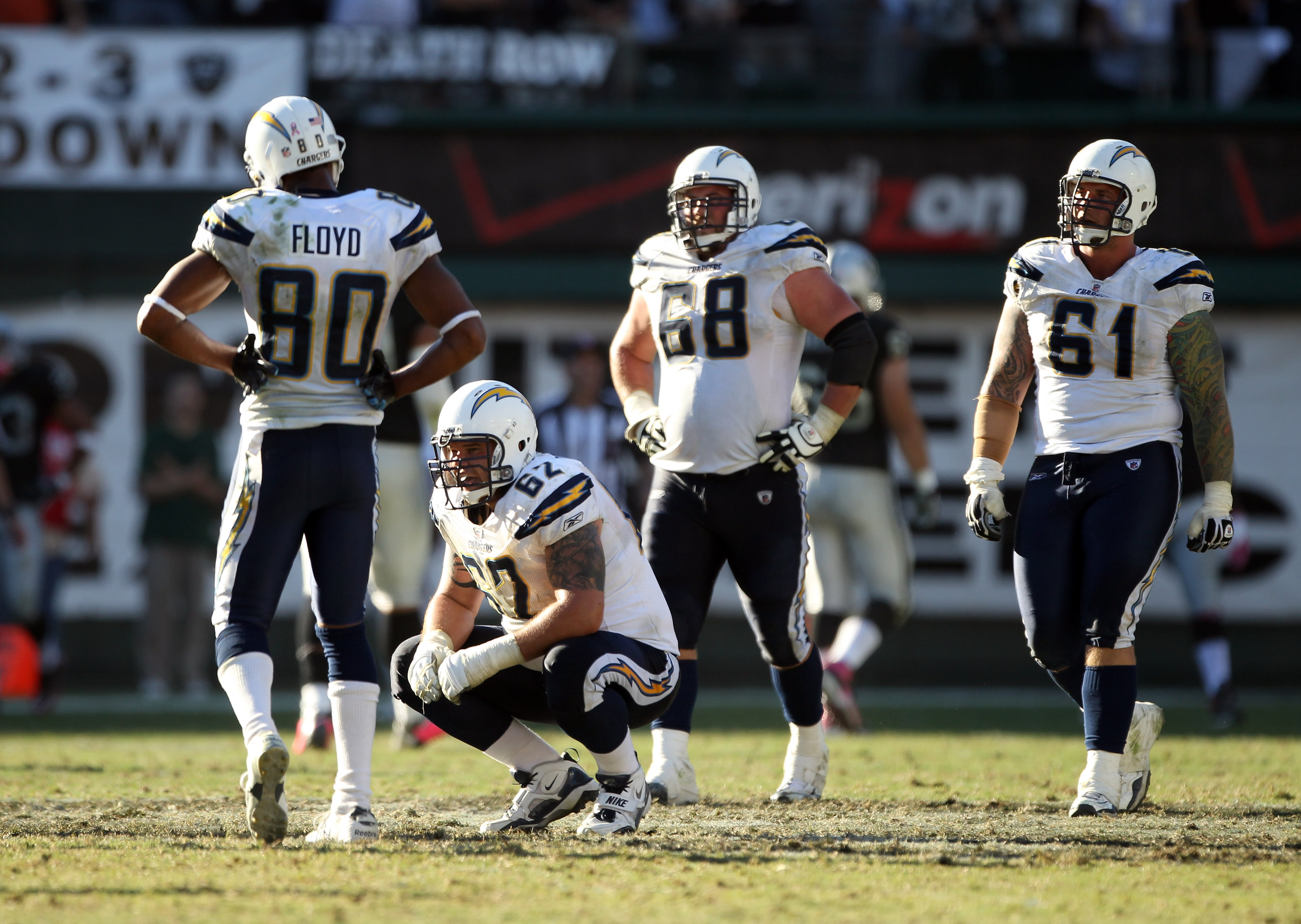 Clary has done a decent job so far this year. However, he continues to make big mistakes and give up bad penalties every game. While consistency is fine, the Chargers have a very good tackle sitting on the bench who deserves a shot.

Dombrowski played very well last year in place of Clary, and he deserves a shot at the starting role. The extra practice time afforded to the Chargers over the bye should partially be used to create a competition between these two, with the winner obviously earning the starting spot next week against Denver.

Use Antwan Applewhite and Brandon Lang on a Rotational Basis 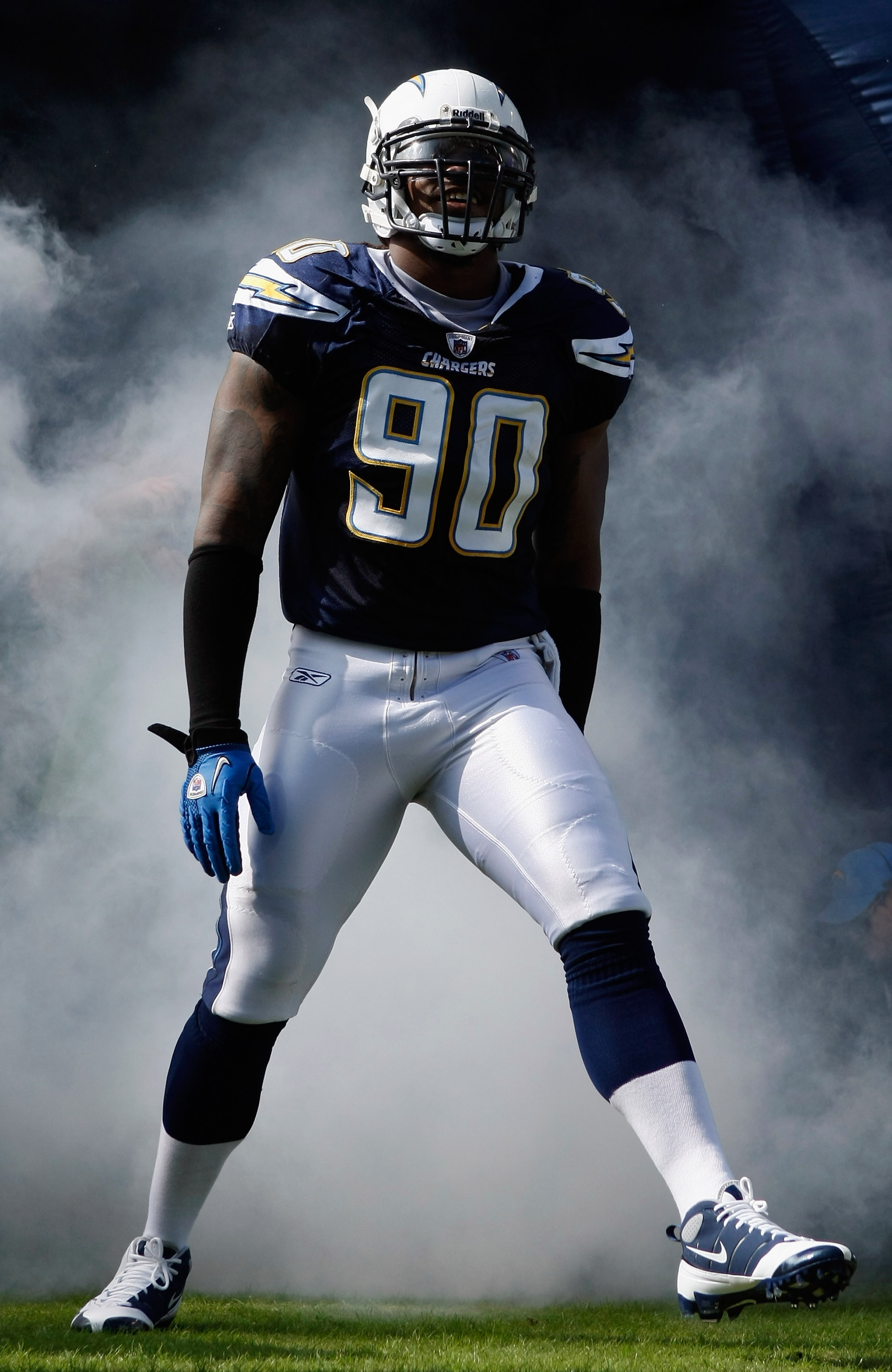 Don't get me wrong here, I really like Antwan Applewhite.

That having been said, sometimes it becomes clear that he needs a breather, but the lack of linebacker depth that the Chargers have means that he more or less has to stay in.

Larry English should be returning to the lineup sometime soon, but, in the mean time, it seems like it would be in the best interest of the Chargers to give Brandon Lang a shot at playing in the linebacker rotation.

I also realize that Antwan Barnes has been getting some work on the outside, but to me it seems like he would be better suited as an inside linebacker depth player while Brandon Siler continues to sit out with an injury. 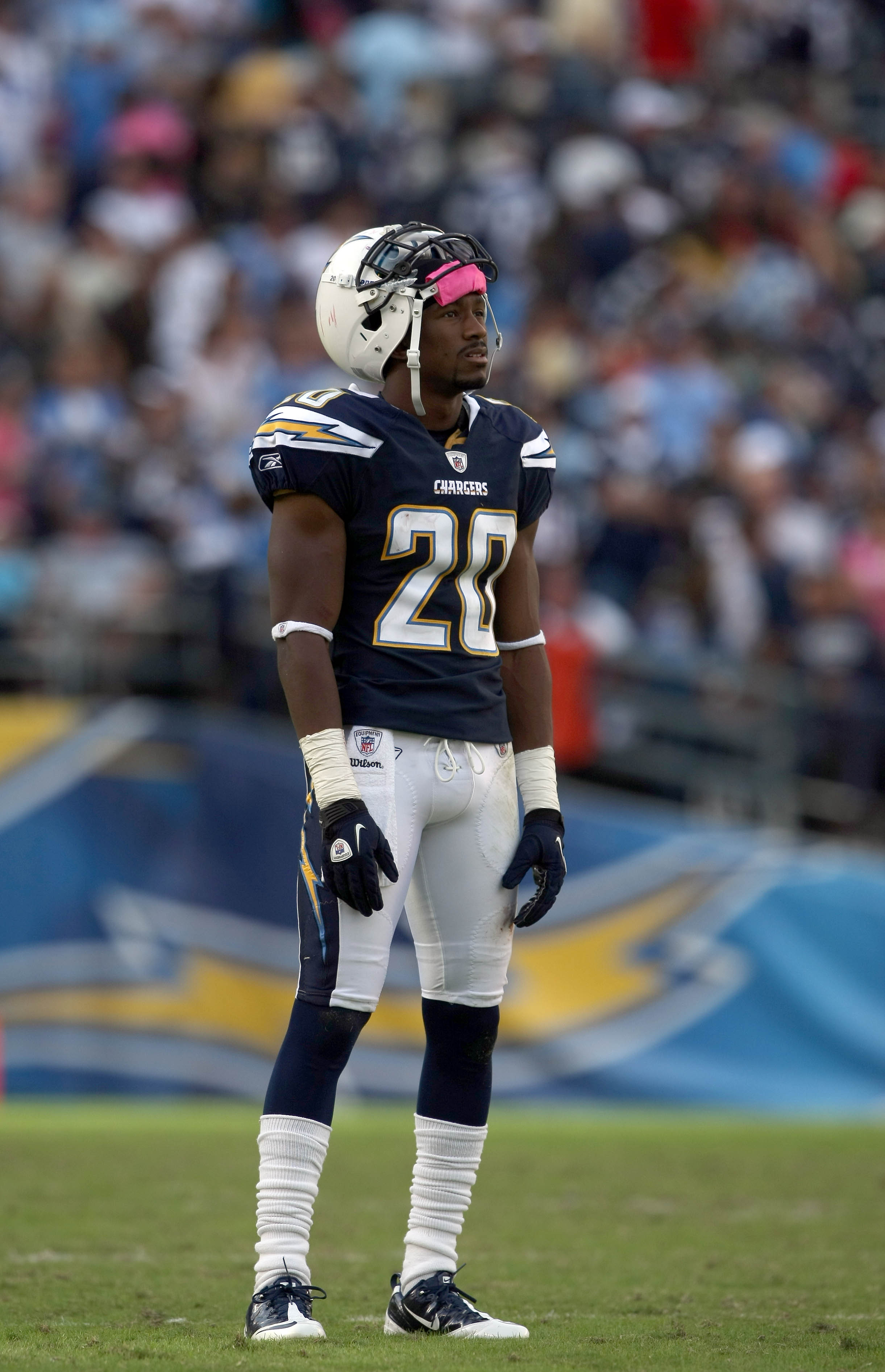 This isn't strictly a roster move, but stick with me here.

Antoine Cason has been a spotty player so far this year. Some games he is on top of things, and some games he just isn't.

He has given up a lot of big plays recently, and it might be time to start considering laying down a challenge for his roster spot.

If Cason can step up and show the coaching staff that he deserves to start, he has nothing to worry about. However, if that isn't the case, the Chargers need to give serious looks to Donald Strickland and Dante Hughes.

While Strickland is certainly a better nickel corner than on outside corner, he has made some great plays playing against wide receivers and thus deserves a shot.

Dante Hughes, on the other hand, is still developing, but there is no reason why he shouldn't get a shot as well. 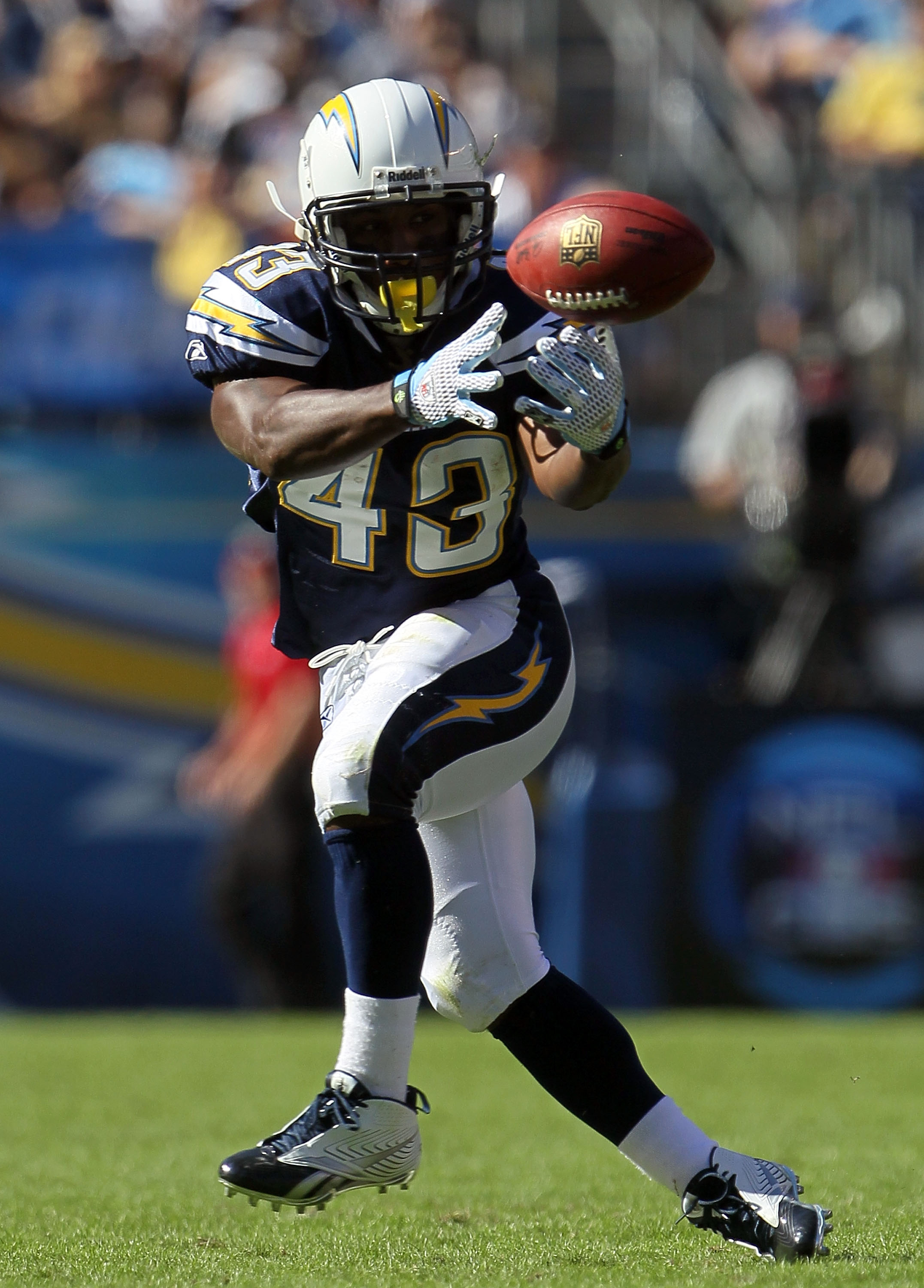 Remember when I said I would stop making slides about cutting players?

Sproles has been severely underperforming this year, and is certainly not earning the franchise tag money that he is being paid. The Chargers have found a rhythm with other running backs like Mike Tolbert, and have options on the practice squad (i.e. Curtis Brinkley) who could replace him.

At this point, the Chargers can no longer trade him, and the fact hat he isn't making great contributions to the team only means that he is taking up a roster spot that could be used for, say, a special teamer or a return man.