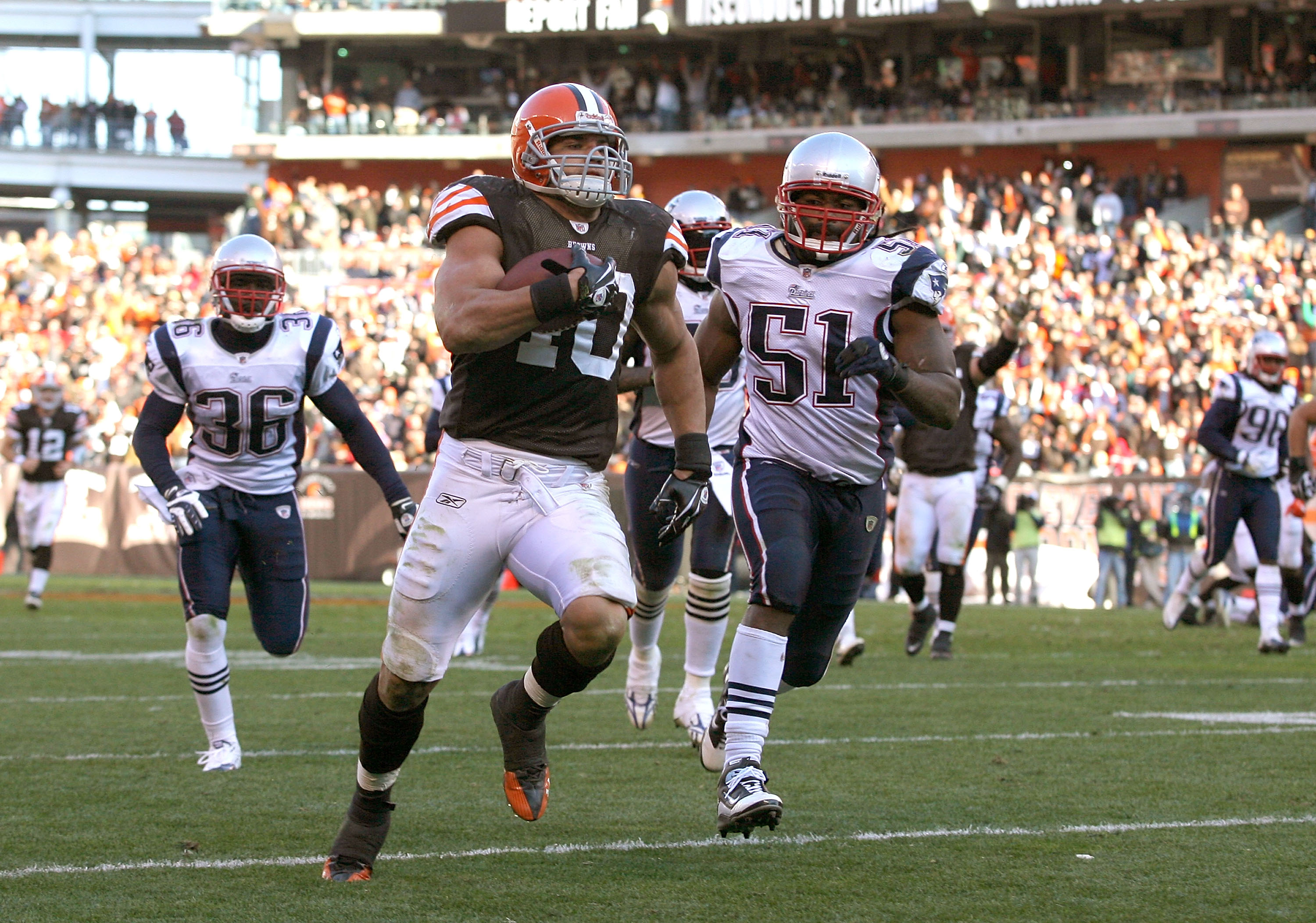 We've got another parity filled week in the NFL.  The Patriots got dumped by the lowly Browns.  The Lions all but gave away a game to the New York Jets.  The Vikings pull off the dramatic comeback and hold off their season's death rattle for at least another week.

The best record in the league right now is 6-2.  No team has emerged as being absolutely dominant, and everyone appears capable of dropping a few more games.  Let's take a look at some possible upsets this week. 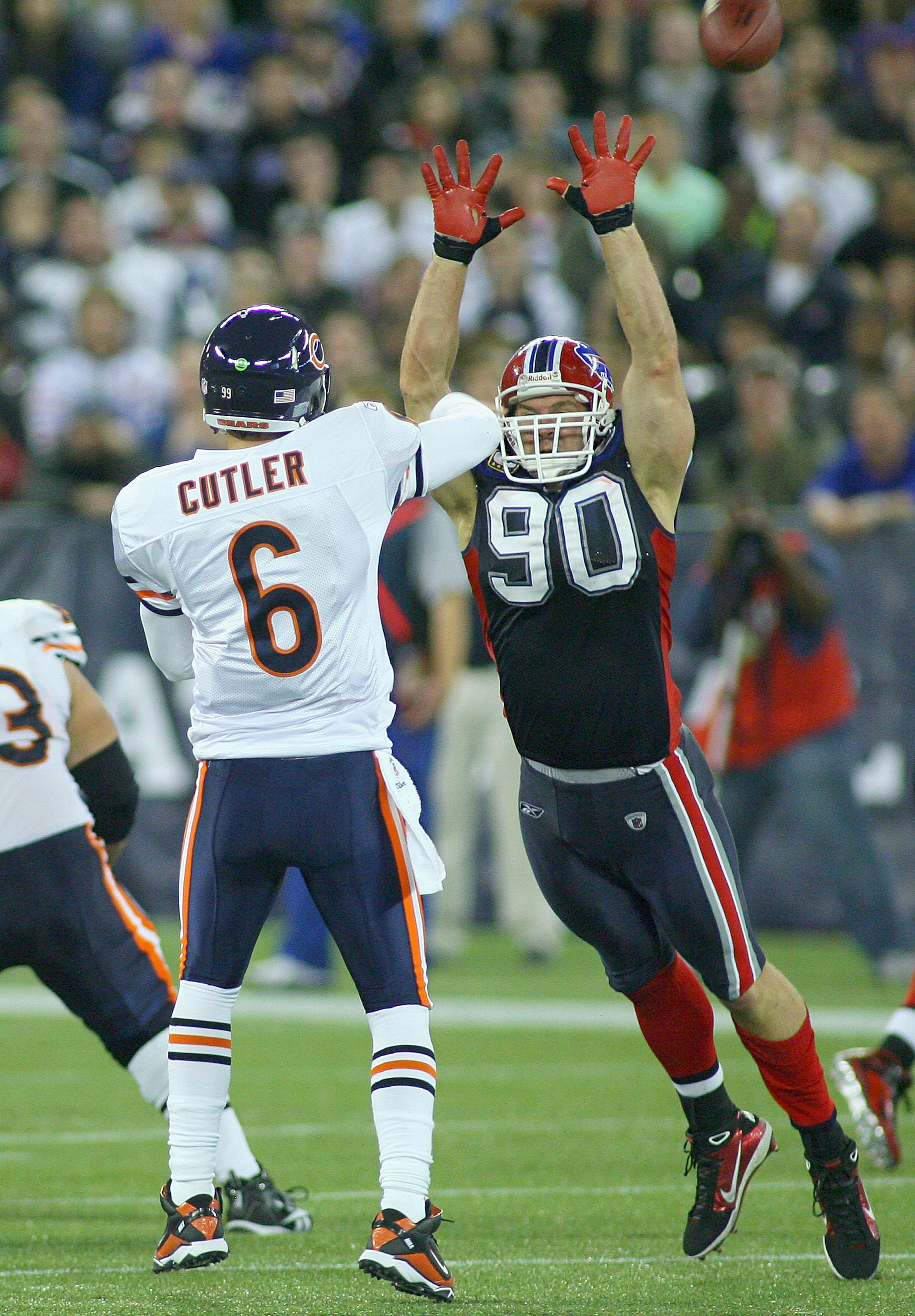 Minnesota saved it's season (potentially) last Sunday with a dramatic comeback victory over the Cardinals.  It's clear, however, that Childress has lost control of the offensive guys after several weeks of publicly lambasting Favre in press conferences (even though he said it was a joke) and a dispute with Percy Harvin.  These guys are playing for themselves, or maybe for Brett.

A comeback like that, however, can help a team rally.  I think the late game heroics against the Cardinals will jumpstart this team, and help them reel off a couple of wins, and that starts with the Bears.

Chicago is coming off a come from behind victory as well.  Cutler threw a fourth quarter TD pass to seal the game for the Bears in Toronto.  Despite the victory, the Bears didn't look particularly sharp, but did manage to protect Cutler.

Why The Vikings Will Win 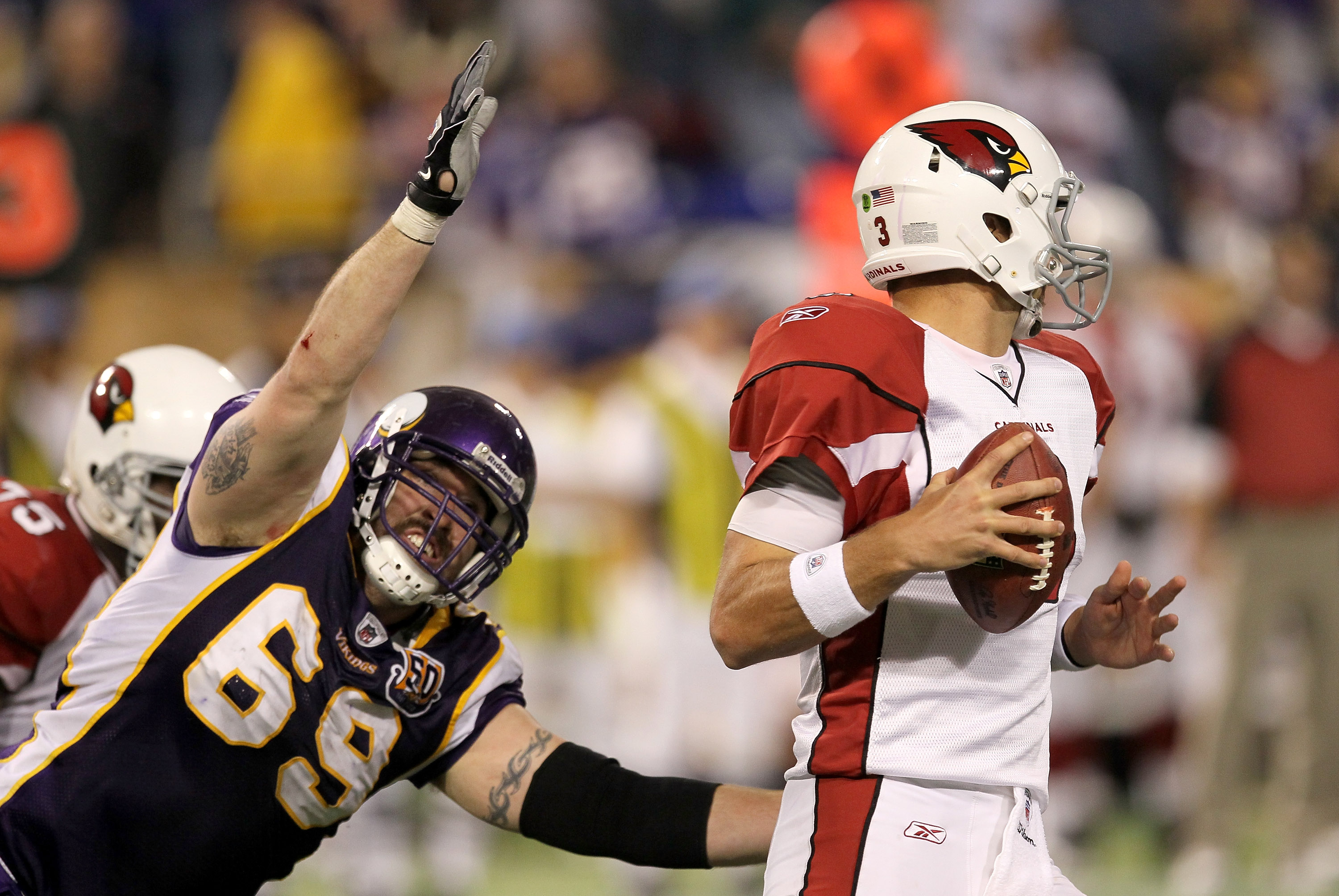 Though the Vikings record is disappointing, deep down they are a pretty solid team.  They have solid receiving options, and one of the best running backs in the league.  Despite Favre's tendency to throw the costly interception, he is still a pretty elite quarterback and is capable of leading a team back late in games.

The Bears on the other hand are a team who are not nearly as good as their record indicates.  They've only beaten one team with a winning record, and are only 2-2 at home.  They have given up a league leading 32 sacks.

While the Vikings pass rush has been relatively dormant this season, look for Jared Allen and Co. to get on track this week against a bad offensive line.  If that happens, Cutler will be throwing for all kinds of platforms, where he is more likely to make mistakes.

On offense, the Vikings found some rythm at the end of last week, and will look to carry that over.  Now the Bears do match up pretty well with the Vikings offense.  The Bears strength is their run defense, but they are decent against the pass.  That said, I think the Vikings are onto something after their late comeback, and will beat an overmatched Bears team. 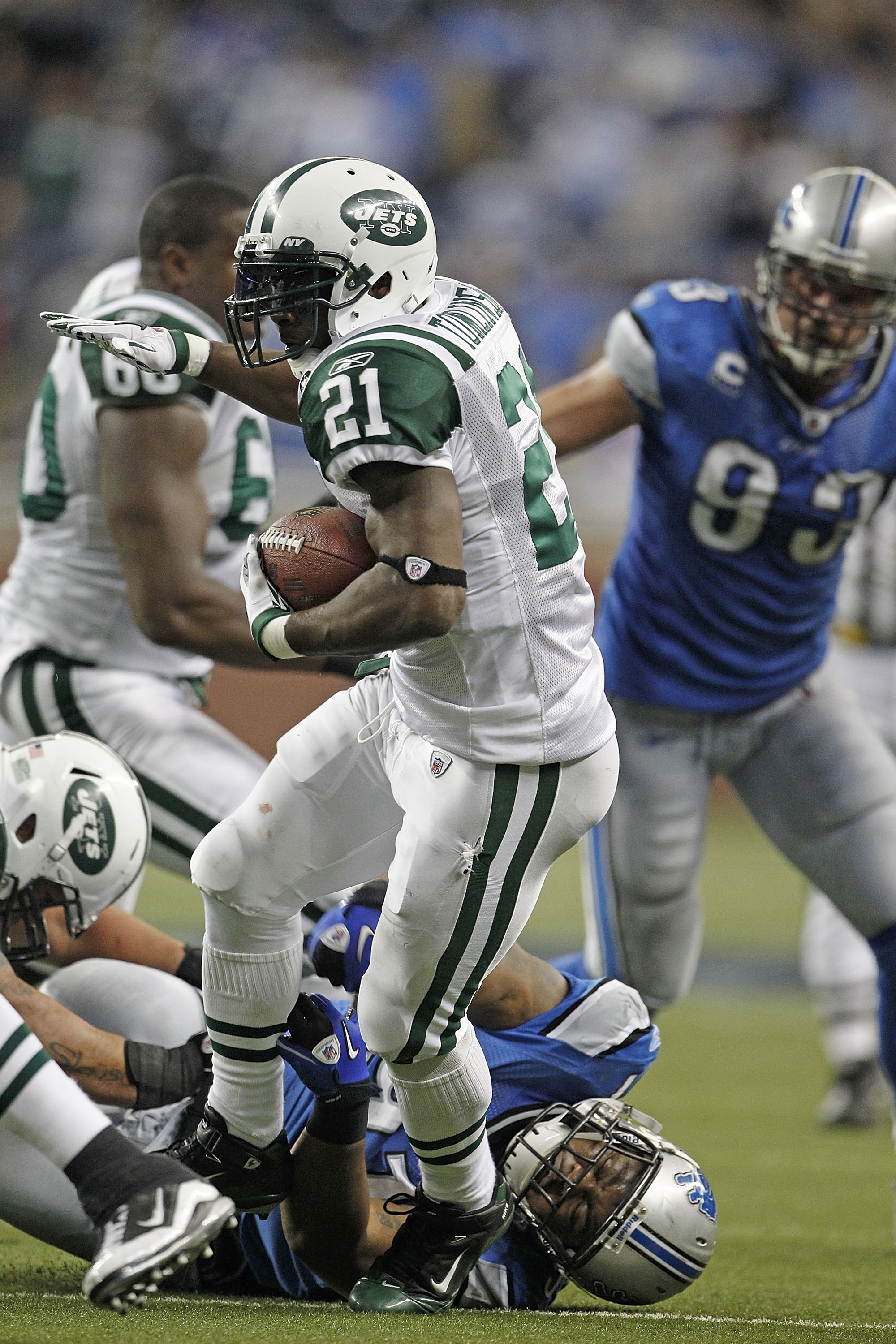 The Jets pulled off an improbable comeback Sunday against the Lions, thanks in part to the fact that kicker Jason Hanson is a big baby.  Had he managed to kick one measly extra point, rather than sitting out, the Lions win the game in regulation.

All ranting aside, Mark Sanchez had one of his best games as a pro and came through in the clutch.  The Jets took away Calvin Johnson and made other players try and beat them.  This week they will look to contain Peyton Hillis who is having a break out year.

Peyton Hillis and rookie QB Colt McCoy jumpstarted this offense Sunday en route to a 34-14 dismantling of the Patriots.

The Browns have won their last two games, both over solid Saints and Patriots teams.  The defense has elevated their level of play, forcing turnovers and getting stops.  While the Jets pride themselves on running the ball and physicality, the Browns are built primarily on those same principles.  This should be a physical matchup.

Why The Browns Will Win 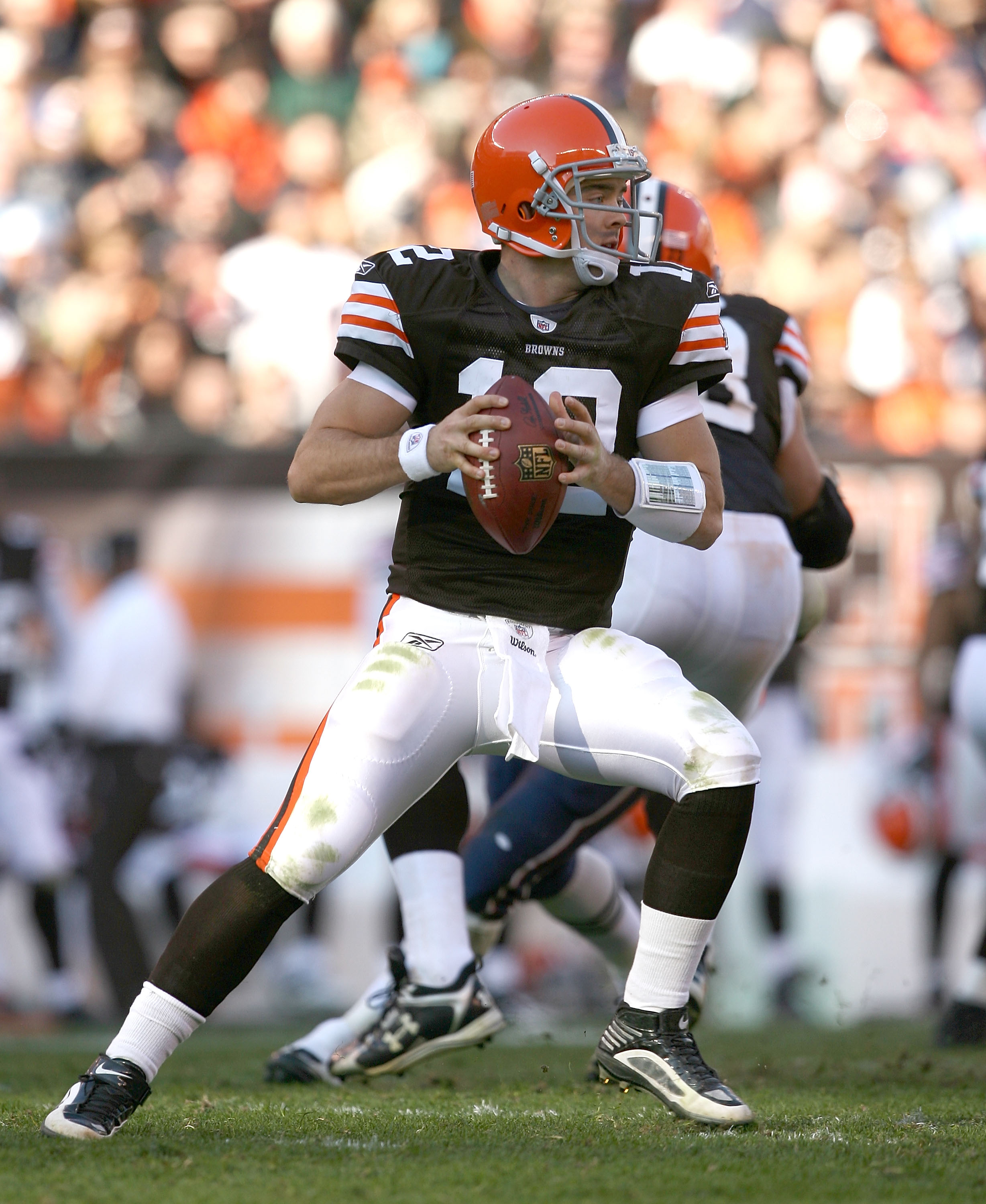 Cleveland has had two straight big wins, and is a hot team right now.  They've beaten some of the best teams in both the NFC and AFC.  Colt McCoy, in his three games as a starter, has been efficient if not spectacular.

The Jets, on the other hand, are coming off of two straight lackluster performances.  The win in Detroit masks the fact that they needed a fourth quarter comeback, and a missed extra point, to even get to overtime.  The week before they were shutout by the Packers.

While the Jets will look to blitz McCoy and load the box to stop Hillis, I think both young players will have some success.  They're confidence can only be growing after a couple of victories and the Browns look like a dangerous team.

Expect a low scoring, grind-it-out affair, that the Browns will win. 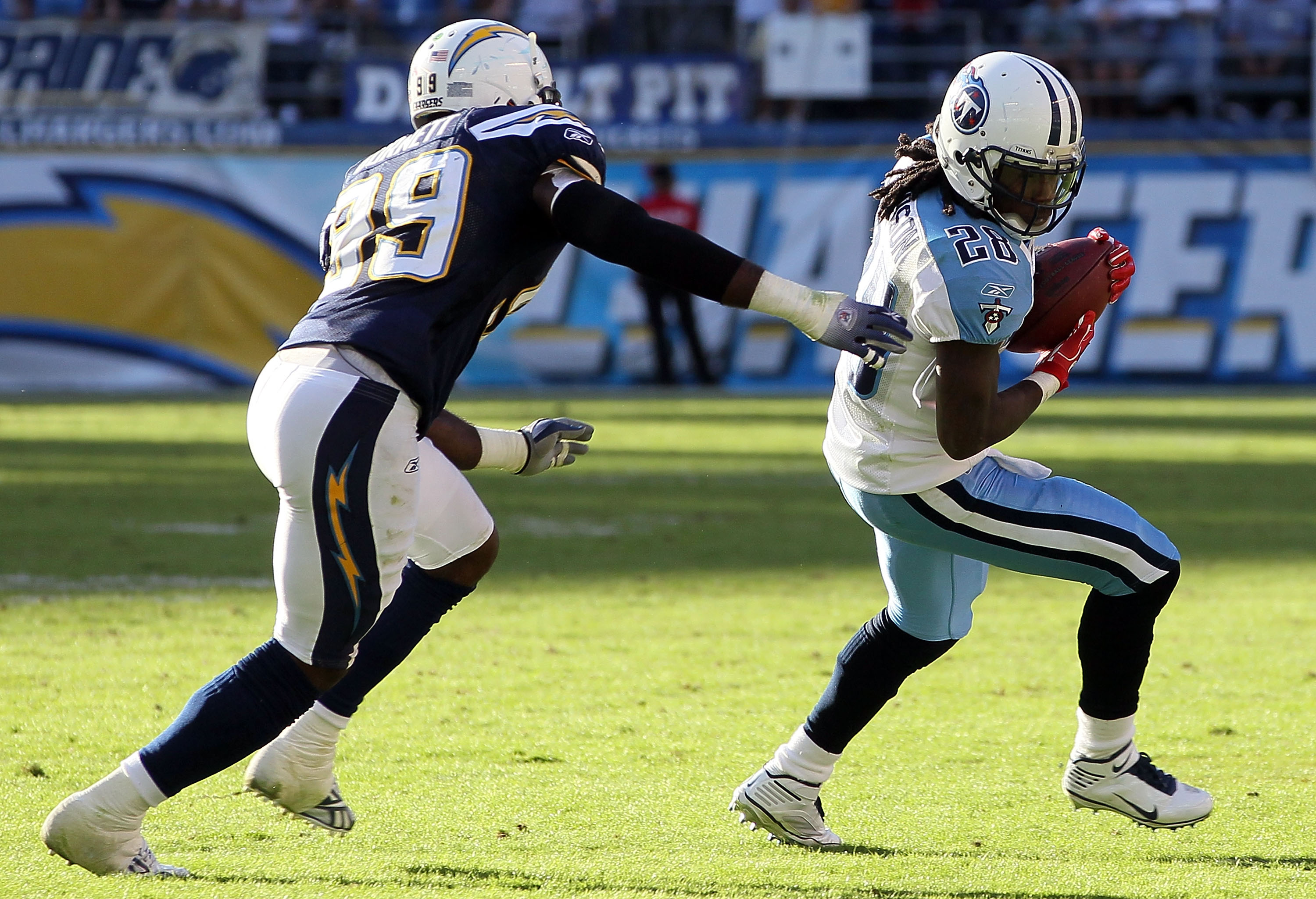 The 5-3 Titans are coming off of a bye week and have added Randy Moss to the roster.  While they haven't exactly been dominant, the offense has been efficient and Kenny Britt has emerged as a star.  Moss should "take the top off" of opposing defenses and give Chris Johnson a little more room to run.

On the defensive side of the ball, the Titans relatively anonymous defensive line has been getting the job done. They have recorded 26 sacks in their first eight games.

Miami has largely been a disappointment this season.  They have lost a couple of close games, however their schedule is brutal.  They've lost to arguably the four best teams in the AFC, the Jets, Ravens, Pats, and Steelers.

Henne has been relatively solid, but you'd like to see Brandon Marshall get more involved in the scoring act.

In the wake of spit-gate, you'd expect the Miami defense to be fired up, and eager to contain Chris Johnson.

Why Miami Will Win 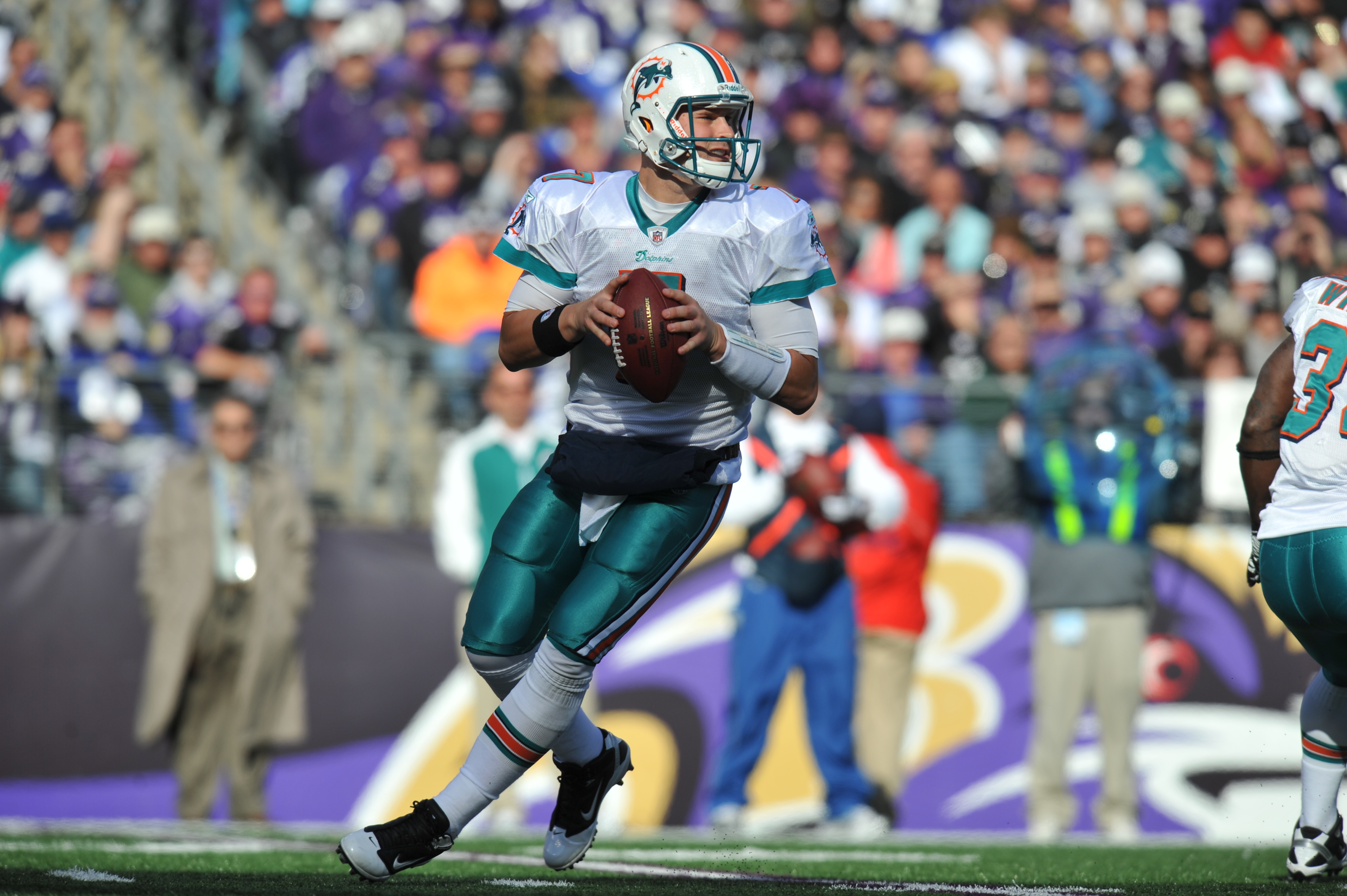 The Dolphins have lost to the four best teams in the AFC, but thankfully the Titans aren't quite as good as those teams.

The Moss acquisition does make the Titans more difficult to defend, however, you'd expect the Dolphins to be decent against defending Moss, since they've already faced off against him once this season.  In that game they held Moss without a catch.

Defending Chris Johnson and Kenny Britt won't be easy either, however, Johnson hasn't been as dynamic as last season, and the Dolphins defense is relatively solid.

Look for the Dolphins to find success moving the ball through the air.  They do a nice job protecting the quarterback, and if Henne has time, he should be able to find receivers down field.  The Titans have struggled against the pass, ranking 23rd.

I think the Dolphins will be able to move the ball through the air and should be pretty good at shutting down the Titans' vertical passing game. 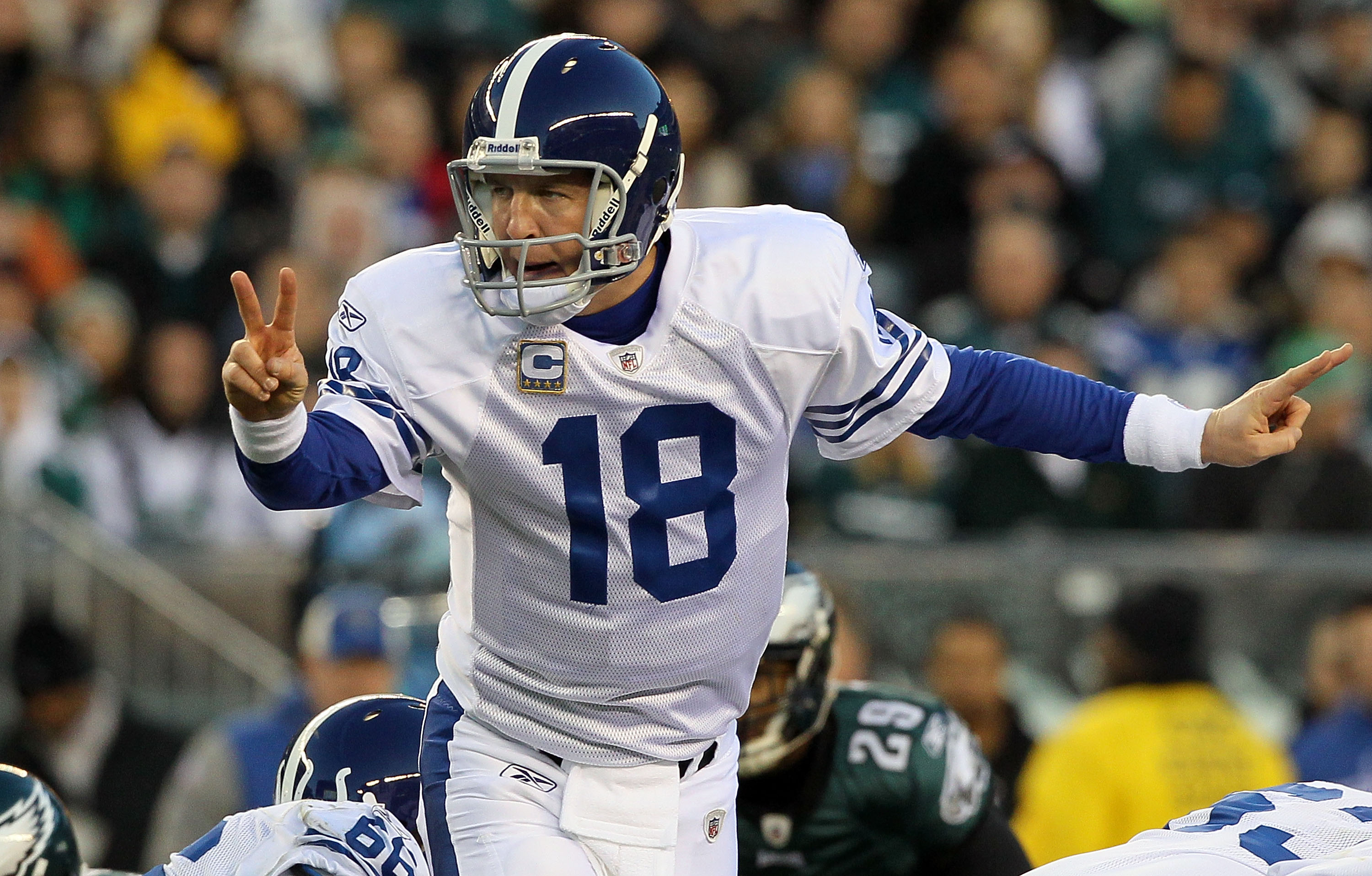 The Bengals flashed some of their potential Monday night against the Steelers.  Ultimately, however, the big hole they dug early in the game cost them a victory.

T.O. is enjoying a career resurgence in Cincy and is the Bengals most productive player.  Last seasons Bengals team won ball games thanks to its running attack, but Benson has been inconsistent this year and has not put up the same numbers as last season.

Slow starts have really cost this team, especially against the Steelers and Falcons.  If the Bengals can overcome that, they still have a shot to salvage some of their season.  Right now, though, Marvin Lewis has to be on the hot seat.

The Colts are an incredilby banged up team right now.  Austin Collie will be out, Addai looks like he will still be out, and Clark is done for the season.  Despite the losses, Manning has still put up big numbers, but the offense hasn't looked quite as efficient as in years past.

On defense, the Colts do a pretty nice job against the pass, but struggle against the rush.  They are undersized and much better at getting to the quarterback than stuffing a rushing attack.  They will be happy to be facing a quarterback with less mobility than Michal Vick, who gashed them in passing situations with his legs.

Why Cincinnati Will Win 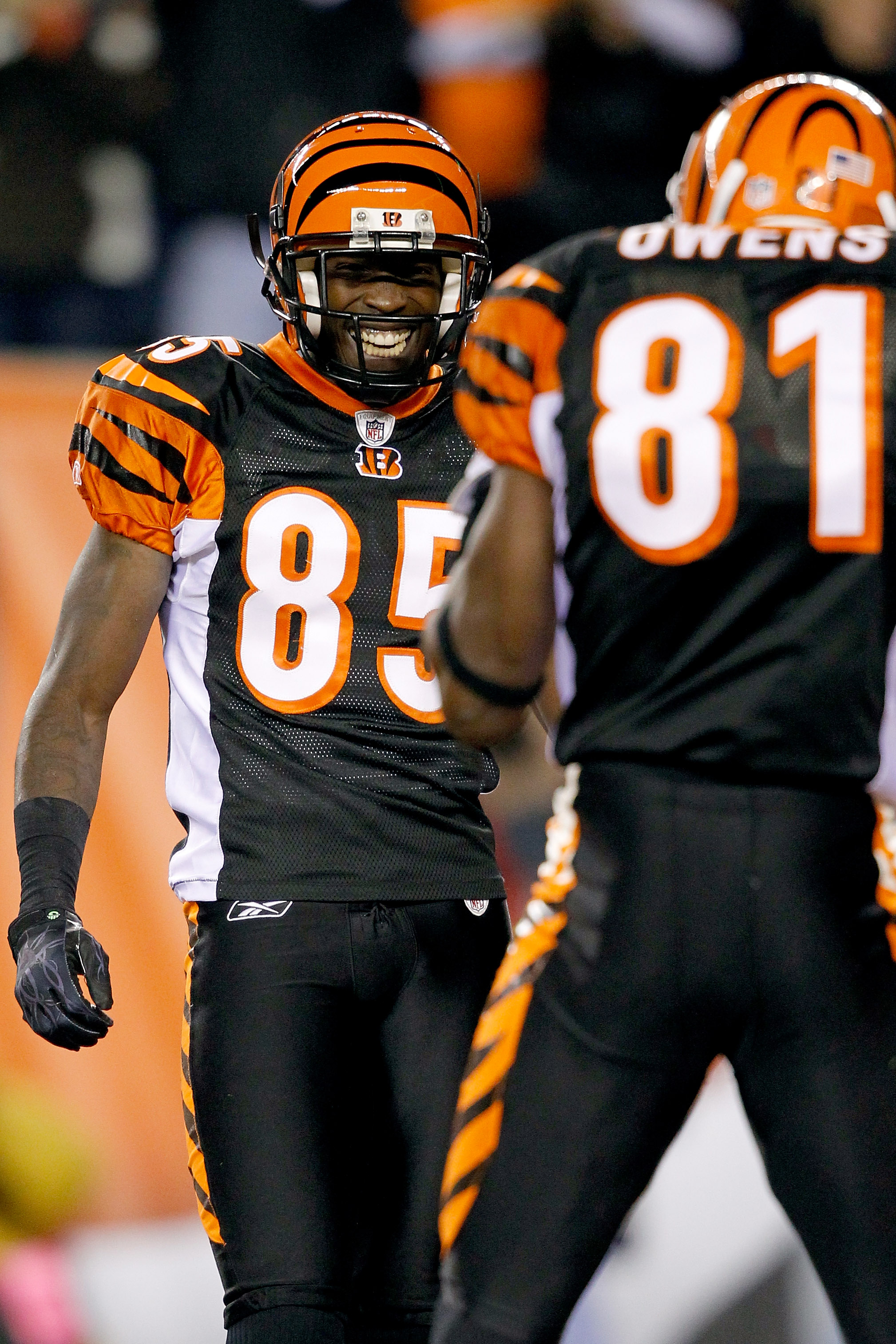 the Bengals showed what they were capable of in the closing stretches of the Monday game, and will look to carry some of that late-game rythm over to Week 10.

Terrell Owens, Chad Ochocinco, Jermaine Gresham, and Jordan Shipley will be too much for the Colts secondary to handle, and I expect Palmer to have a big day passing the ball.  This passing, however, will come later in the game as the Bengals should look to pound the rock with Cedric Benson early. This worked against the Steelers and should work against the Colts.

On defense, the Bengals need to be aggressive against Manning.  He doesn't have the benefit of a strong running back and is missing some key targets.  If the Bengals can do a good job disguising their blitzes, they could fluster the usual unflappable Manning.

I think the Colts injuries will hamstring them in this game and the Bengals will spread the ball around on offense. 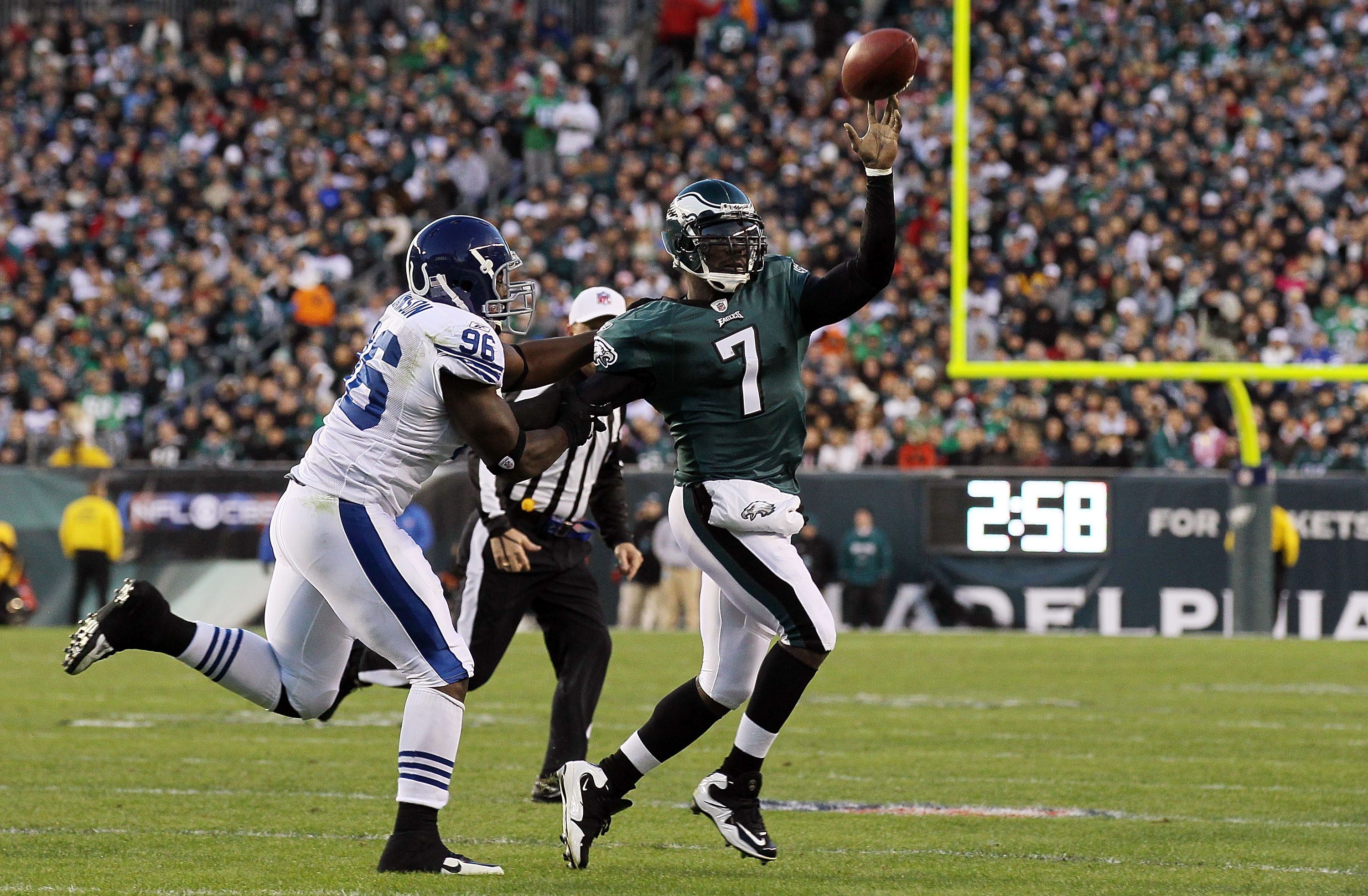 The Eagles are coming off a big home win against the Colts.  Vick is back and its clear that Andy Reid made the right decision for the team.  Vick is the better quarterback right now, and does give the Eagles the better chance of winning. His ability to escape the rush and pickup first downs is key for this offense.

Defensively, the Eagles have been solid, but not great.  Last week they did a nice job disguising their defense and forcing Manning into mistakes.  This should be a little bit easier against the Redskins.

The Redskins are coming off a bye and some controversy.  The McNabb benching story has yet to calm down or really be resolved.  He can do a lot to quiet the storm by beating his old team again, and pushing the Redskins to 3-0 in the division.

On defense the Redskins face a stiff challenge.  They are bad against the pass, but have done a pretty good job rushing the passer.  This week, that will be more important than ever.  Orakpo and other outside rushers must not come too far up field and give Vick lanes to run down hill.

Why Washington Will Win 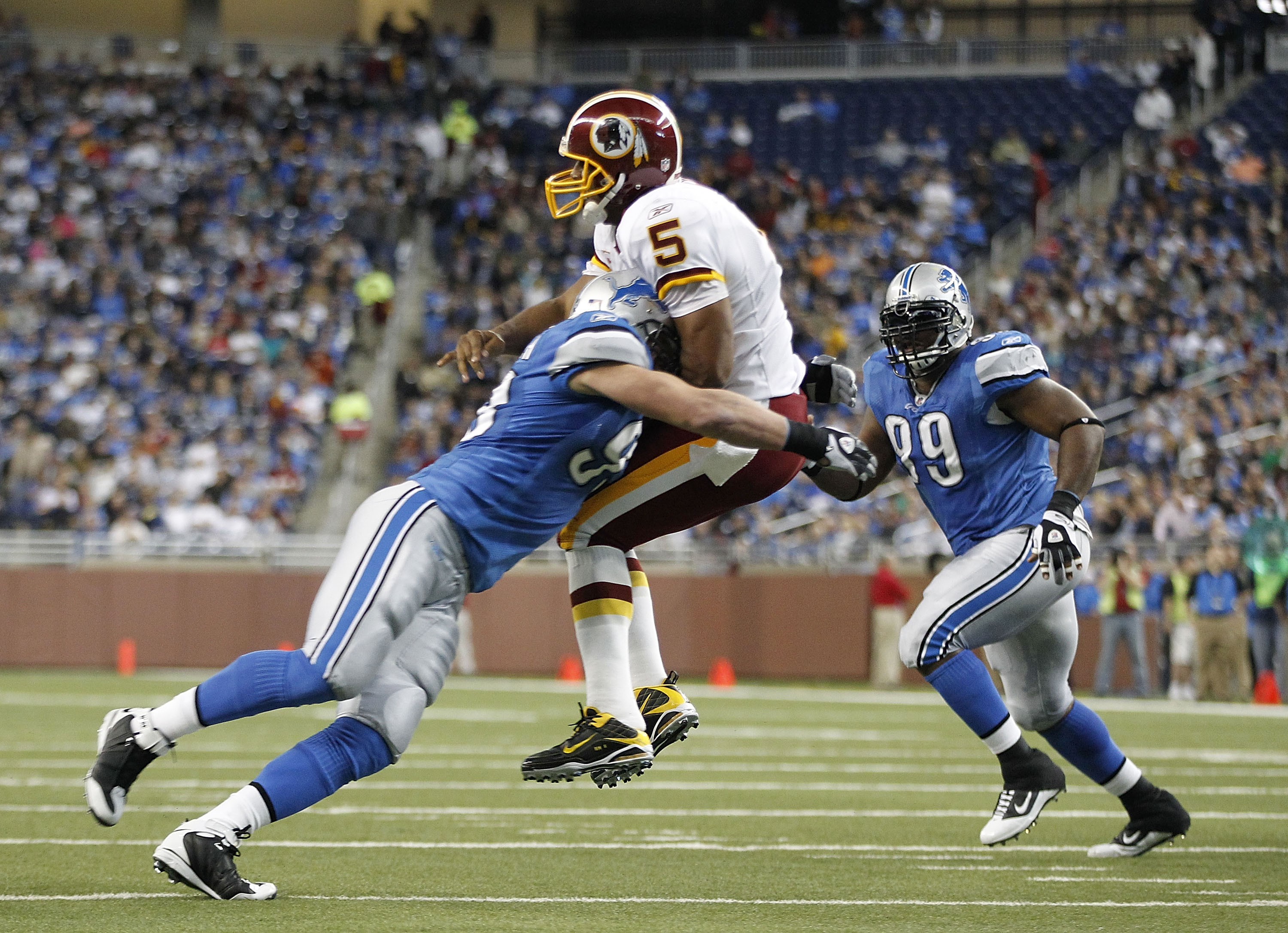 Playing at home, after a week off, I like the Redskins.

Admittedly this is a stiff challenge and the Eagles present some matchup problems.  Defending Vick is difficult, and he has built some nice chemistry with his receivers.  That said, I think a strong interior pass rush with Haynesworth, rather than having defenders come flying up field, is the best way to keep Vick in the pocket.  He has improved as a pocket passer, but he is still not elite.

On offense, the possible return of Clinton Portis is important.  He is a great pass blocker and a better runner than Ryan Torrain.  McNabb has been sacked far too many times and Portis can do a lot to stop this.  Look for Cooley to have a big game.  The Eagles have struggled against opposing tight ends, even the Colts backup Jacob Tamme.  Cooley and McNabb should be able to exploit those matchups.

The home field advantage, McNabb's extra incentive to play well, and the return of Portis should springboard this team to a victory over the Eagles.