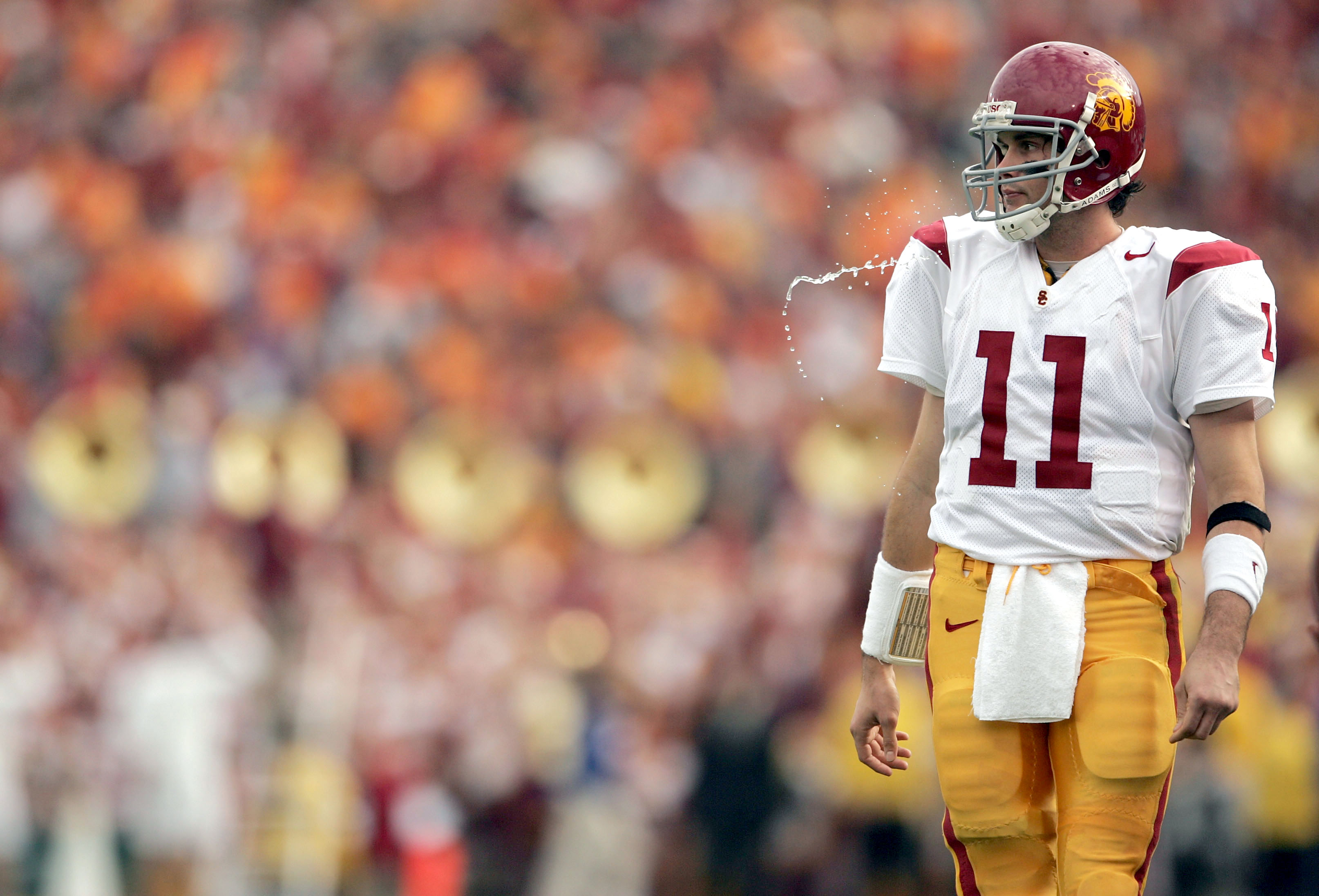 Many schools have laid claim to the title over the years, from Miami to Michigan, west coast to east coast and everywhere in between.

But who's the real king of producing quarterbacks? And not just at the college level either. Pro success is arguably just as important in the equation.

Does recent success weigh heavier than dominance in the distant past? Should quantity or quality be measured? We all argue about it. 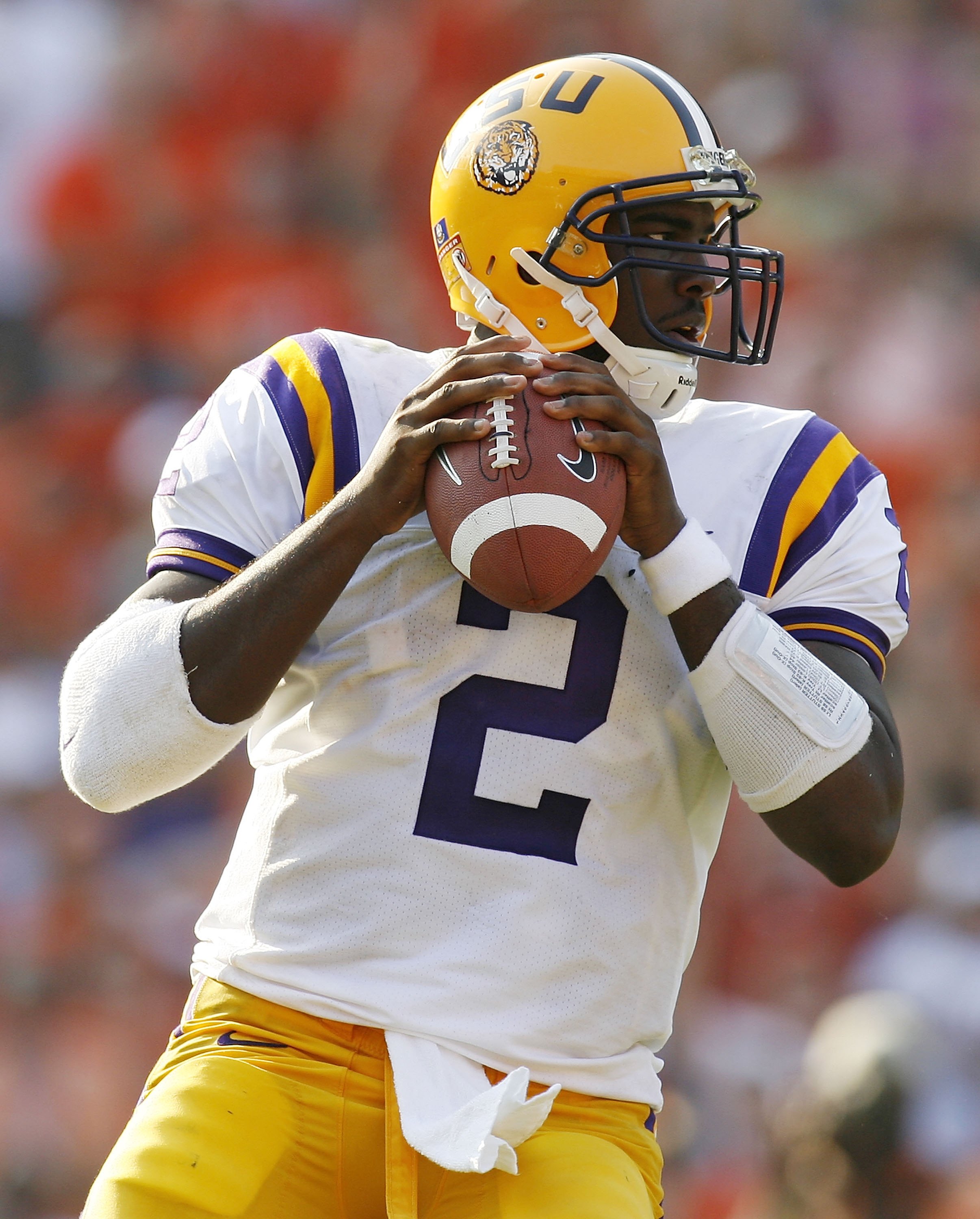 LSU isn't known as a particularly strong quarterback school. But the Tigers round out our top 25 because of an underrated group of passers headlined by passers like David Woodley, Tommy Hodson, Warren Rabb, M.C. Reynolds, Bert Jones and, of course, Y.A. Tittle.

But arguably the most prominent passer in the last 50 years of school history is JaMarcus Russell. While he's considered one of the biggest draft busts in NFL history, Russell's college accomplishments were good enough to win the Sugar Bowl and for him to be selected with the No. 1 overall pick in the 2007 NFL Draft. 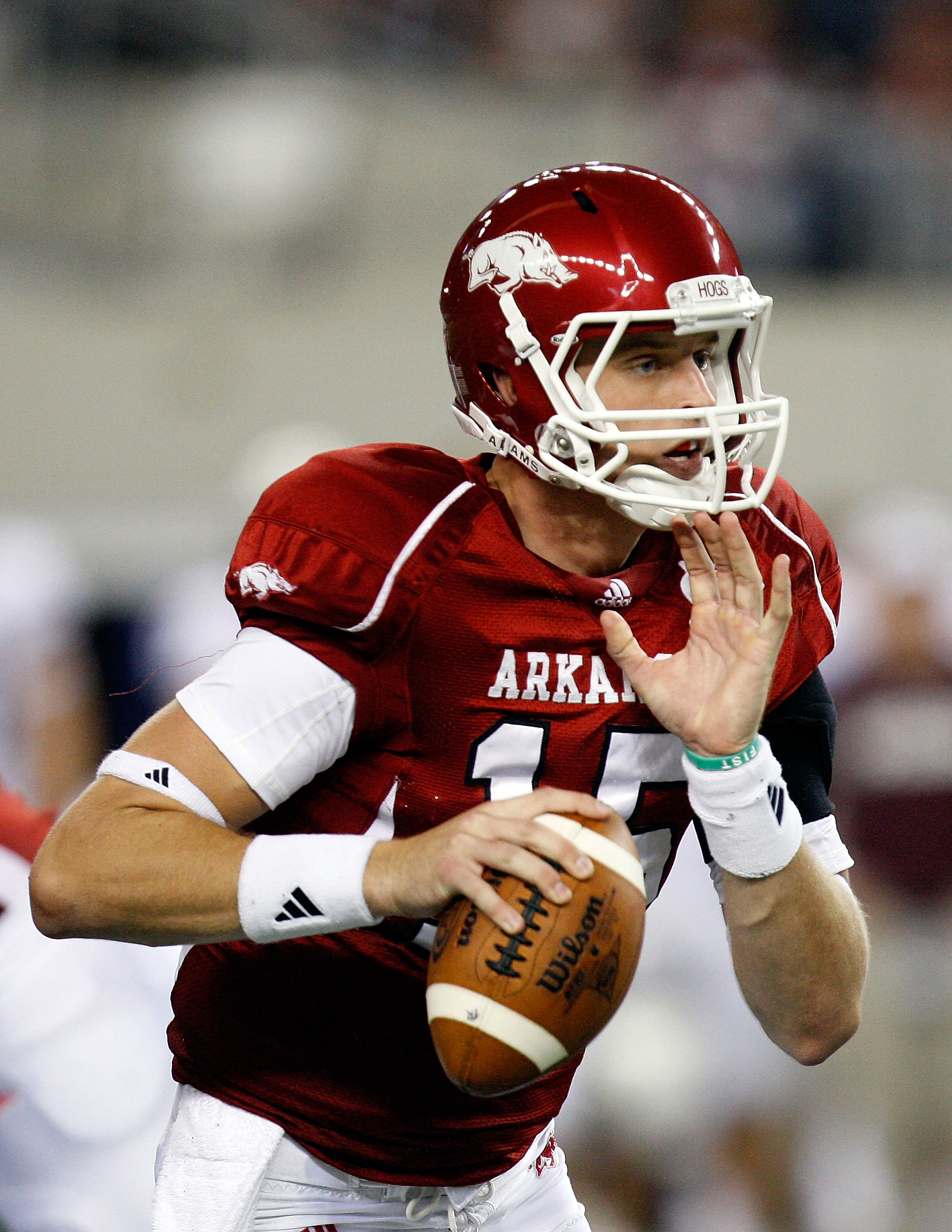 Start watching some Arkansas football and you might begin to get the inclination that Bobby Petrino is building a new Quarterback U in Fayetteville. You don't need to look any further than Ryan Mallett to see why.

While the Razorbacks haven't had success turning quarterbacks into NFL stars, the school has proven capable of producing success at the college level with guys like Ronnie Lee South, Scott Bull and Kevin Scanlon. 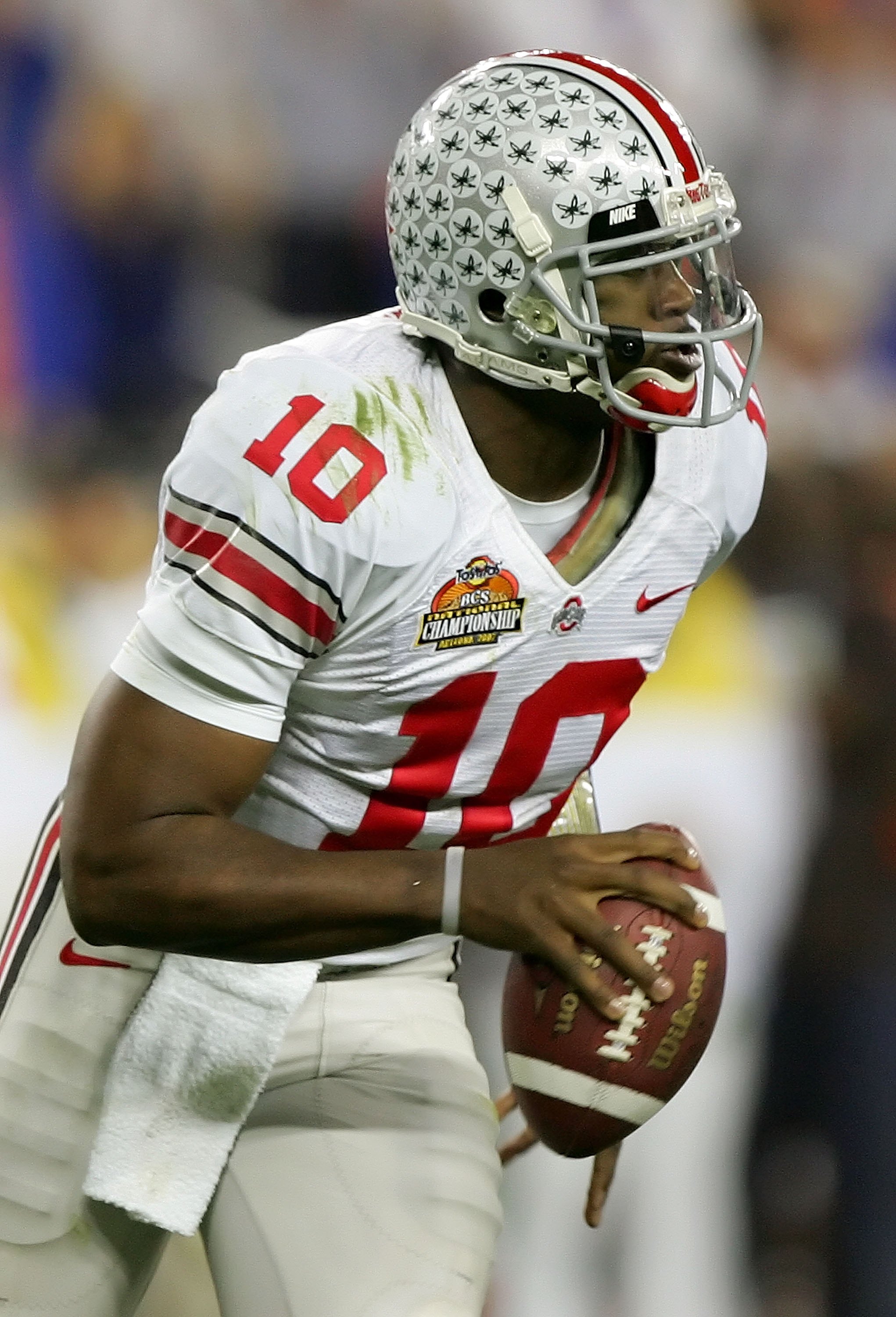 Ohio State had not had a quarterback win a national honor before Troy Smith took home the Heisman in 2006, but he's one of many Buckeye's quarterbacks that have gone on to the NFL.

From a group that includes Mike Tomczak, Kent Graham, Art Schlichter, Kex Kern, Tom Tupa and Tom Matte, Smith is without a doubt the most accomplished college quarterback. 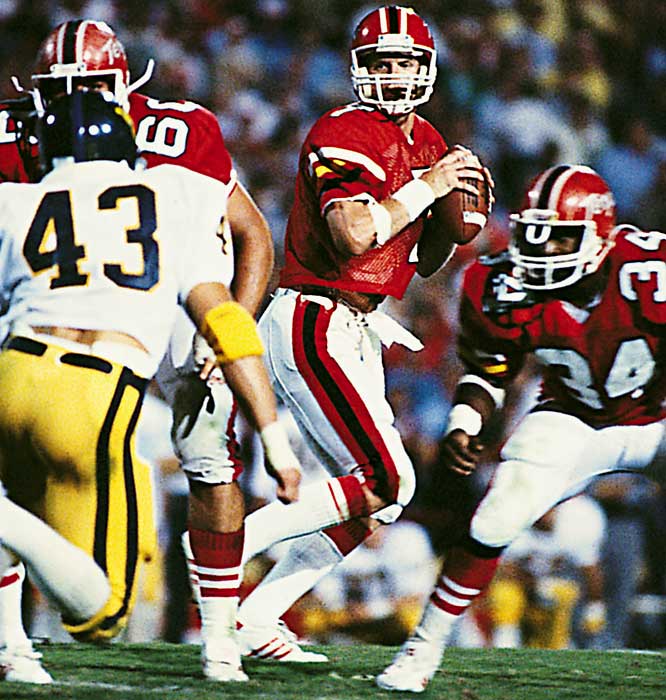 Maryland has seen a drop-off in recent years, but the Terrapins can definitely lay claim to a great group of quarterbacks over the years.

It begins and ends with Boomer Esiason, who set 17 school records at Maryland and who was the NFL's 1988 MVP among many other honors. Add in names like Dick Shiner, Stan Gelbaugh, Frank Reich, Scott Zolak and King Corcoran, and the history of quarterback success runs deep for the Terps. 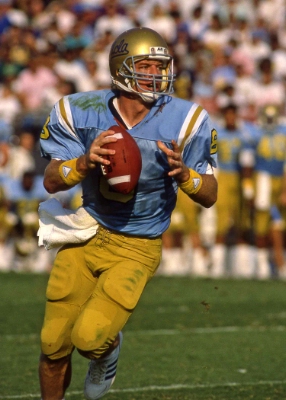 UCLA, like several others on the list, has hit a bit of a rough spot in recent years, with a ton of instability at the quarterback position since Drew Olson in 2005.

But the Bruins have their stars as well, with NFL Hall of Famers like Troy Aikman, Heisman winners like Gary Beban, current UCLA head coach Rick Neuheisel and quite a few others as well. 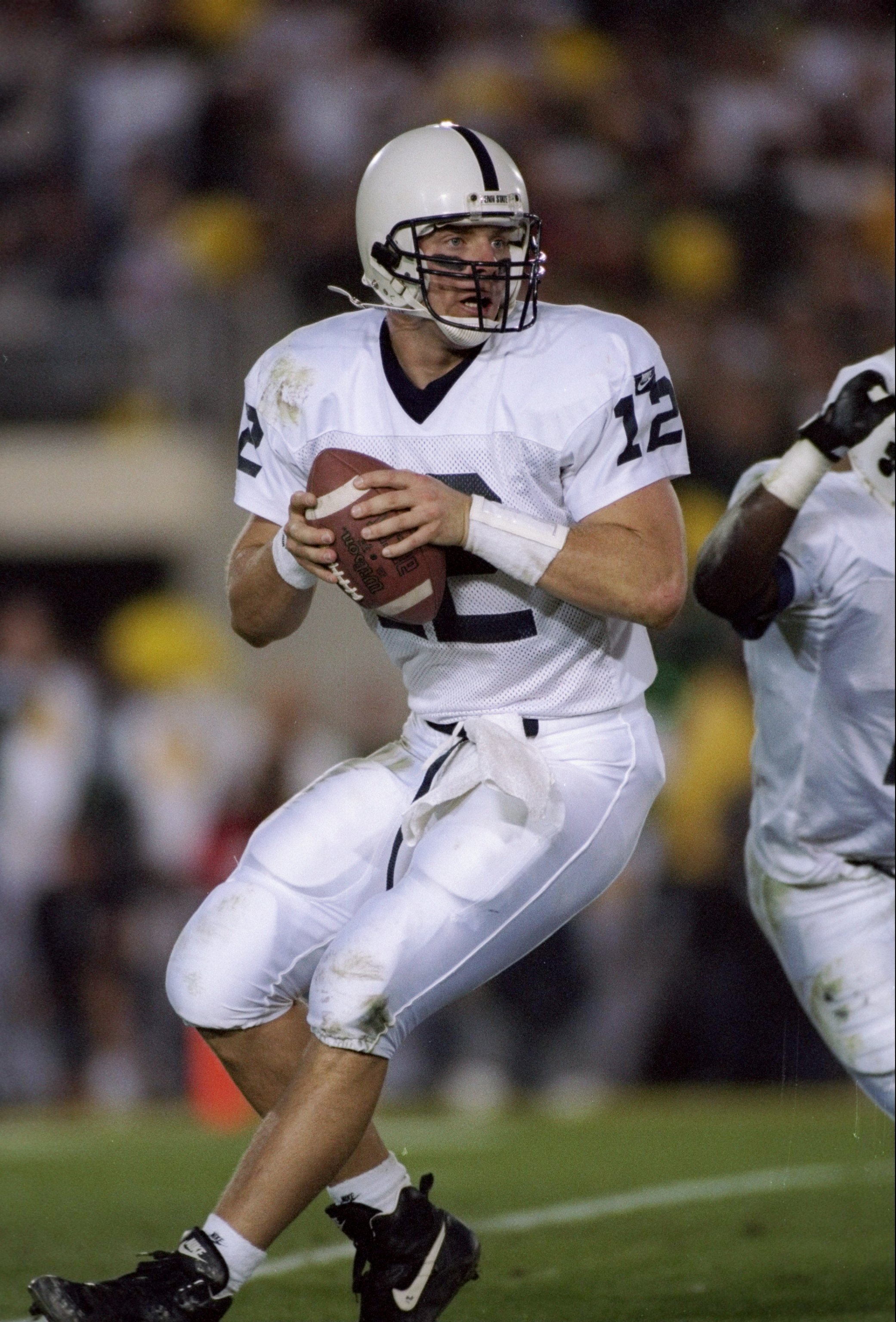 Penn State might be better known as Linebacker U, and with good reason. But the Nittany Lions have a few quarterbacks that spark another debate. 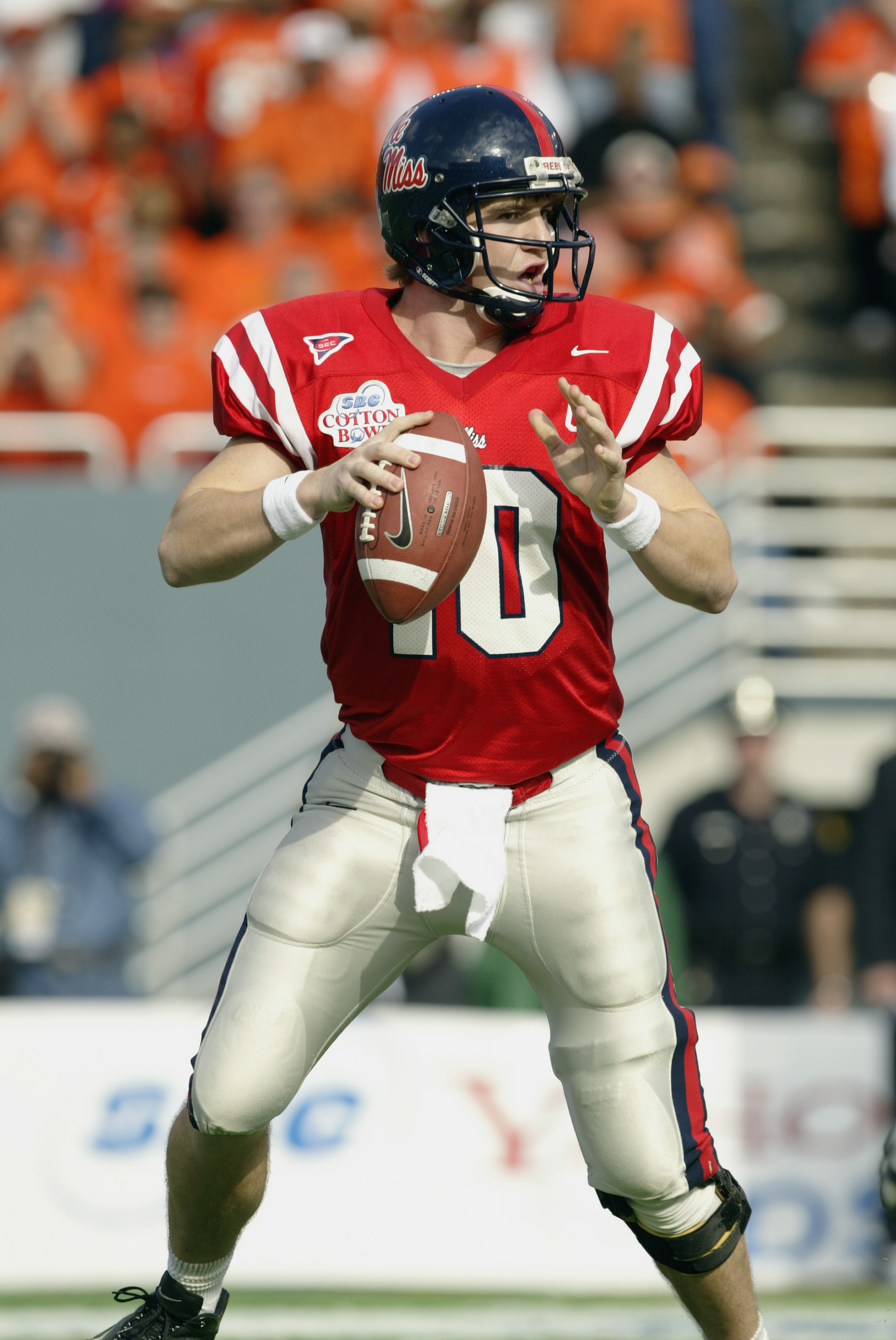 Ole Miss is most famously known for its father-son duo at quarterback—Archie Manning and Eli Manning. Both had great college careers. Based on the way Eli is playing now, he might just go down as a better passer than his father.

But it's not just about the Mannings for the Rebels, with over a dozen other quarterbacks who've played in the NFL, including John Fourcade, Norris Weese, Glynn Griffing and Ray Brown. 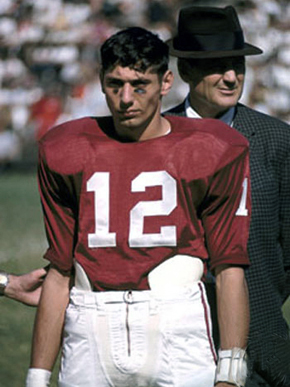 Alabama doesn't have the numbers that other schools do, but the Crimson Tide have a group of legends to chose from if you want to talk about quarterbacks.

Bart Starr, Joe Namath and Ken Stabler speak for themselves. But Alabama has also bred Jay Barker, Steve Sloan, Scott Hunter, Richard Todd and, most recently, Greg McElroy—who's better than the credit he is given. 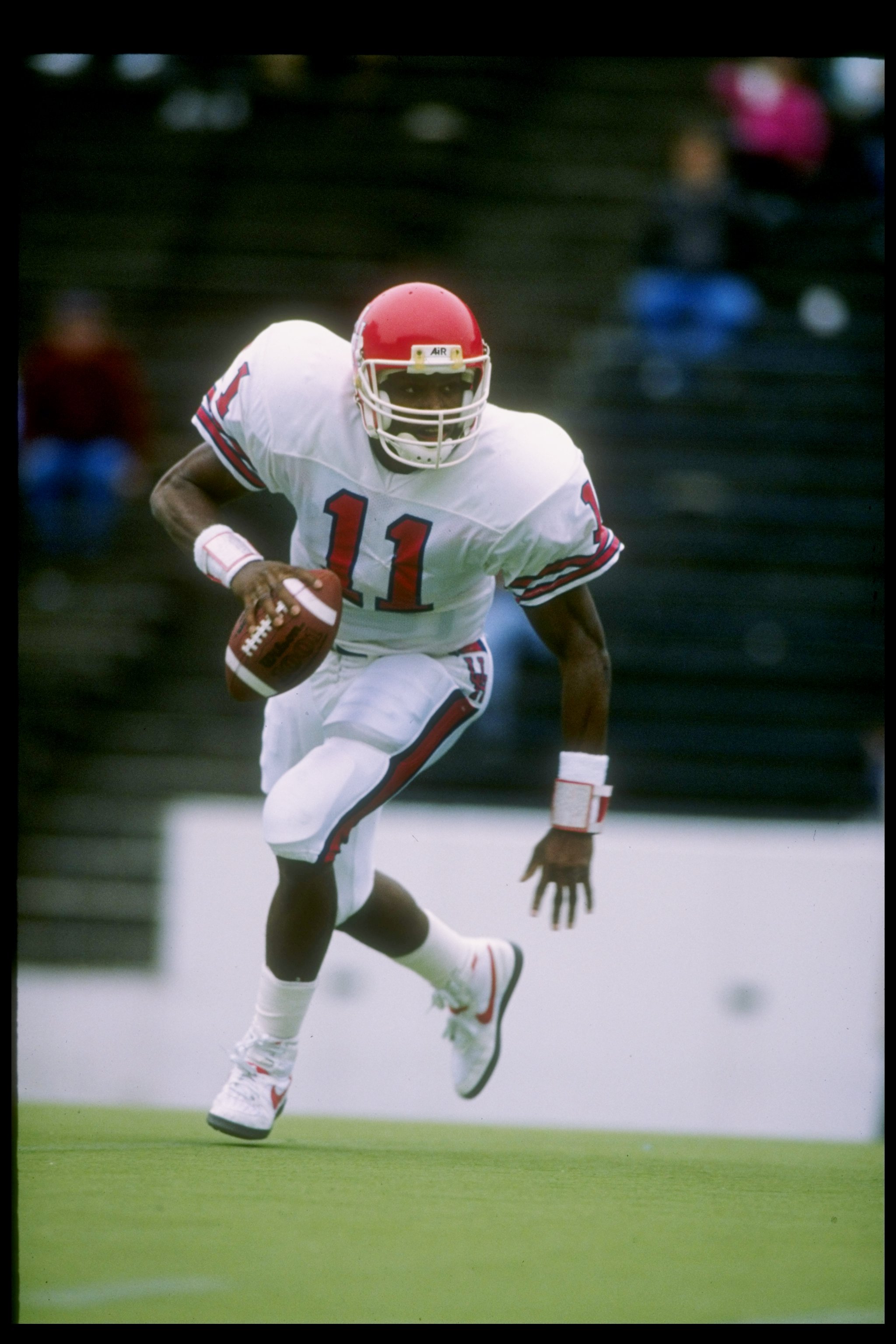 Houston is definitely an underrated quarterback school that doesn't get nearly the credit it deserves. Most fans see it as a home of inflated statistics against a weak schedule.

But don't forget that Andre Ware won the Heisman playing for the Cougars. Or how about Kevin Kolb and Case Keenum? Keenum was on his way to the record books before he tore his ACL this season. There are quite a few others you could bring into the discussion as well if you still aren't satisfied. 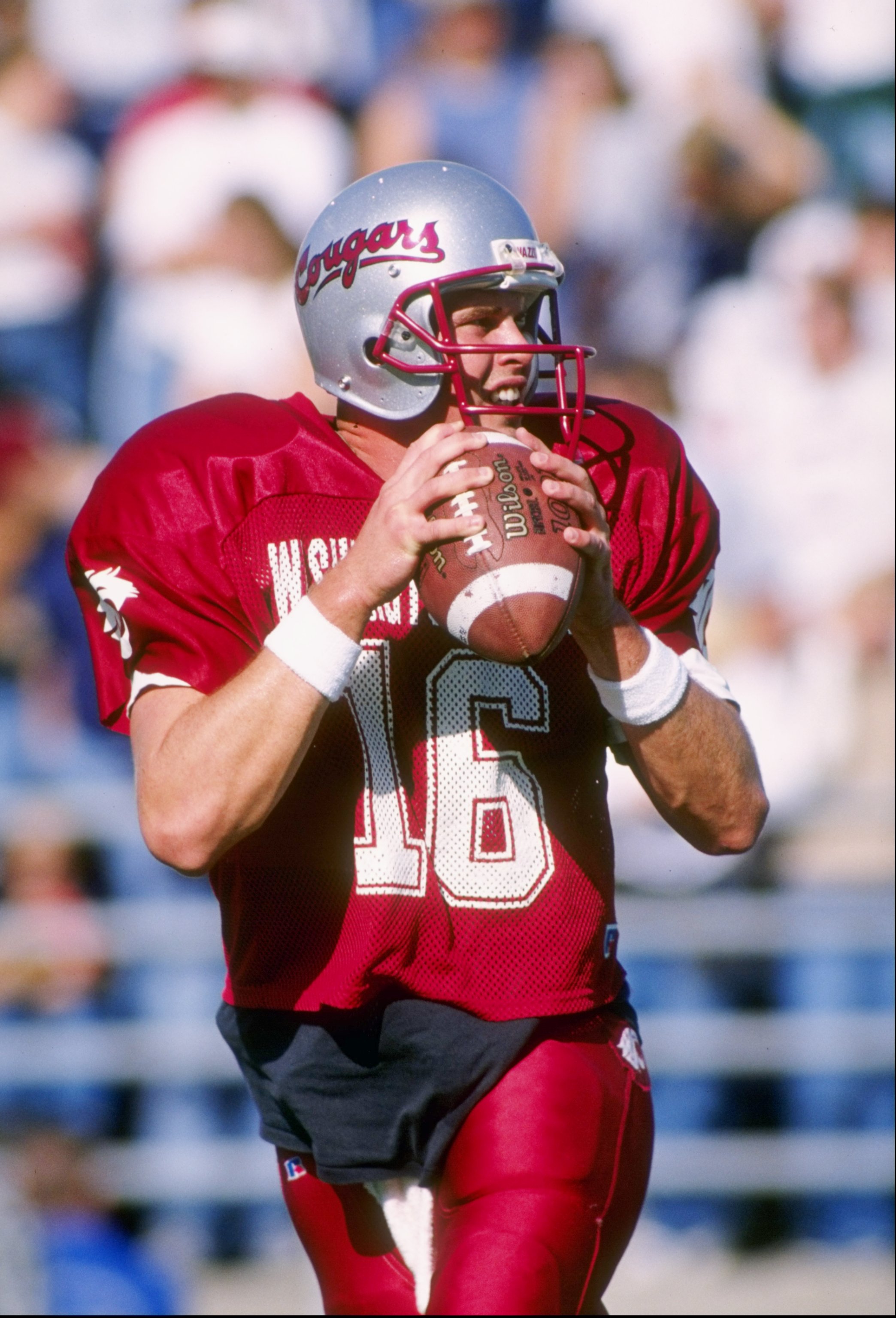 Washington State quarterbacks might best be remembered for Ryan Leaf. Until JaMarcus Russell, Leaf was probably the biggest draft bust in NFL history, but he's only one of a dozen Cougars that have gone on to the NFL.

He isn't the only to flop as a first-round pick either. That honor is shared by Jack Thompson and Timm Rosenbach. Of course, Washington State also lays claim to a pair of quarterbacks who led NFL teams to the Super Bowl—Drew Bledsoe and Mark Rypien. 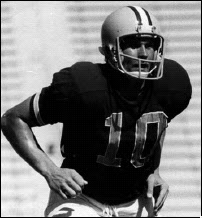 Cal has had it's share of greats, but if you had to pick one, it would be a battle between Steve Bartkowski and Aaron Rodgers. Both were exceptional in college and between them have produced a handful of Pro Bowls. 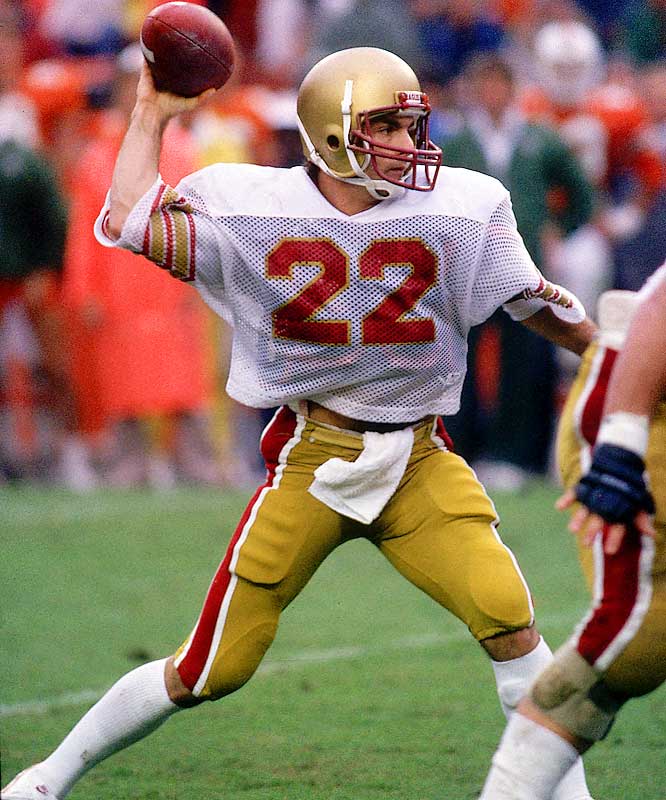 It's actually tough to list Boston College at this point in the list, as you could make quite a good argument the Eagles are more prominent in the discussion.

Of course, there's Doug Flutie at the top of the list for BC. But there's also Matt Hasselbeck, Jack Concannon, Butch Songin, Don Allard, Mike Kruczek, Gary Marangi and, most recently, Matt Ryan. 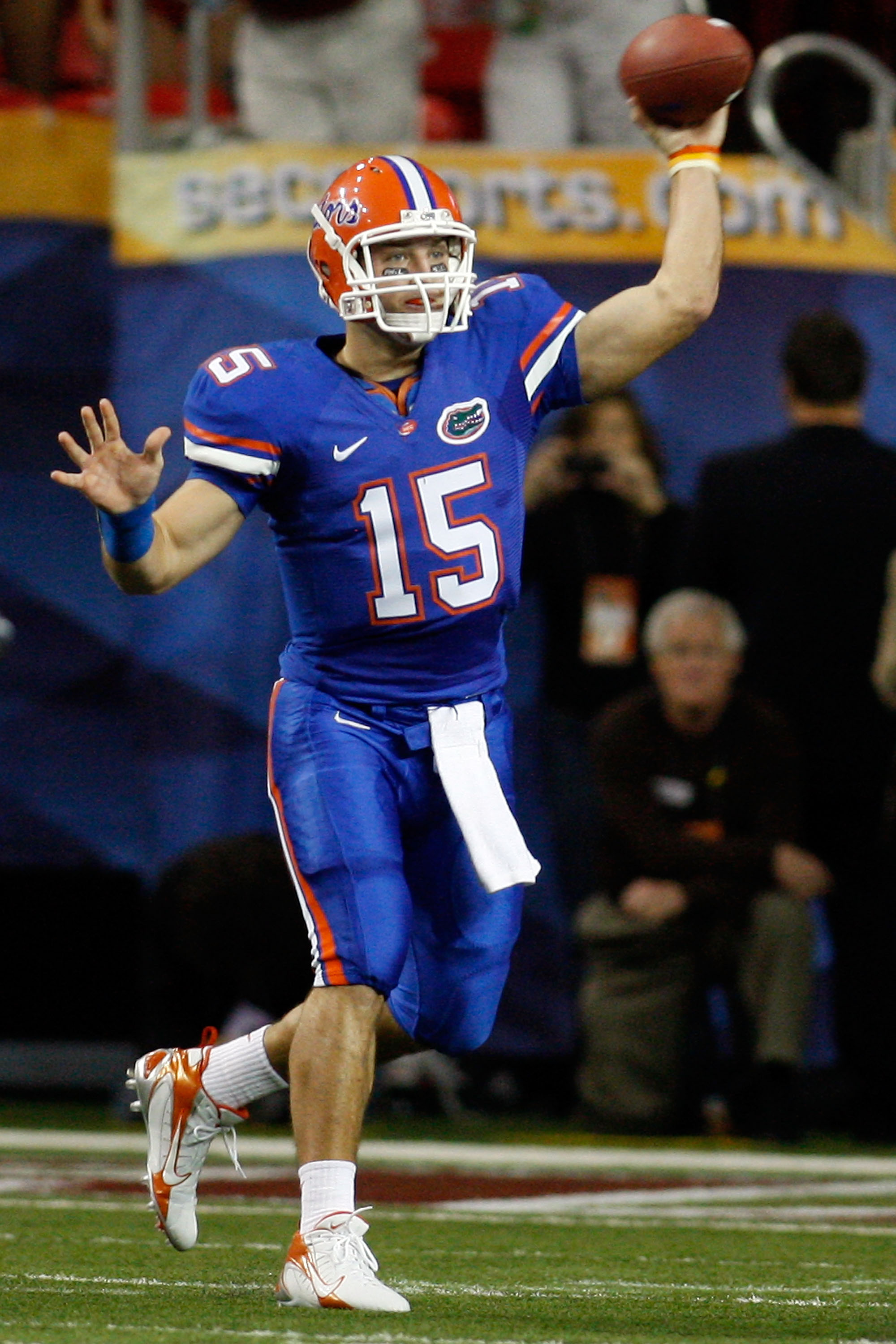 Florida has produced more star quarterbacks in the last 20 years than most schools have produced in the last 80—though none have had success in the NFL. That has given the Gators' passers a reputation as system guys.

But at the college level, with Heisman winners like Tim Tebow and Danny Wuerffel and a cast that includes Rex Grossman, John Reaves, Kerwin Bell, Chris Leak, Jesse Palmer and Doug Johnson, there's no denying the Gators belong in the Quarterback U discussion. 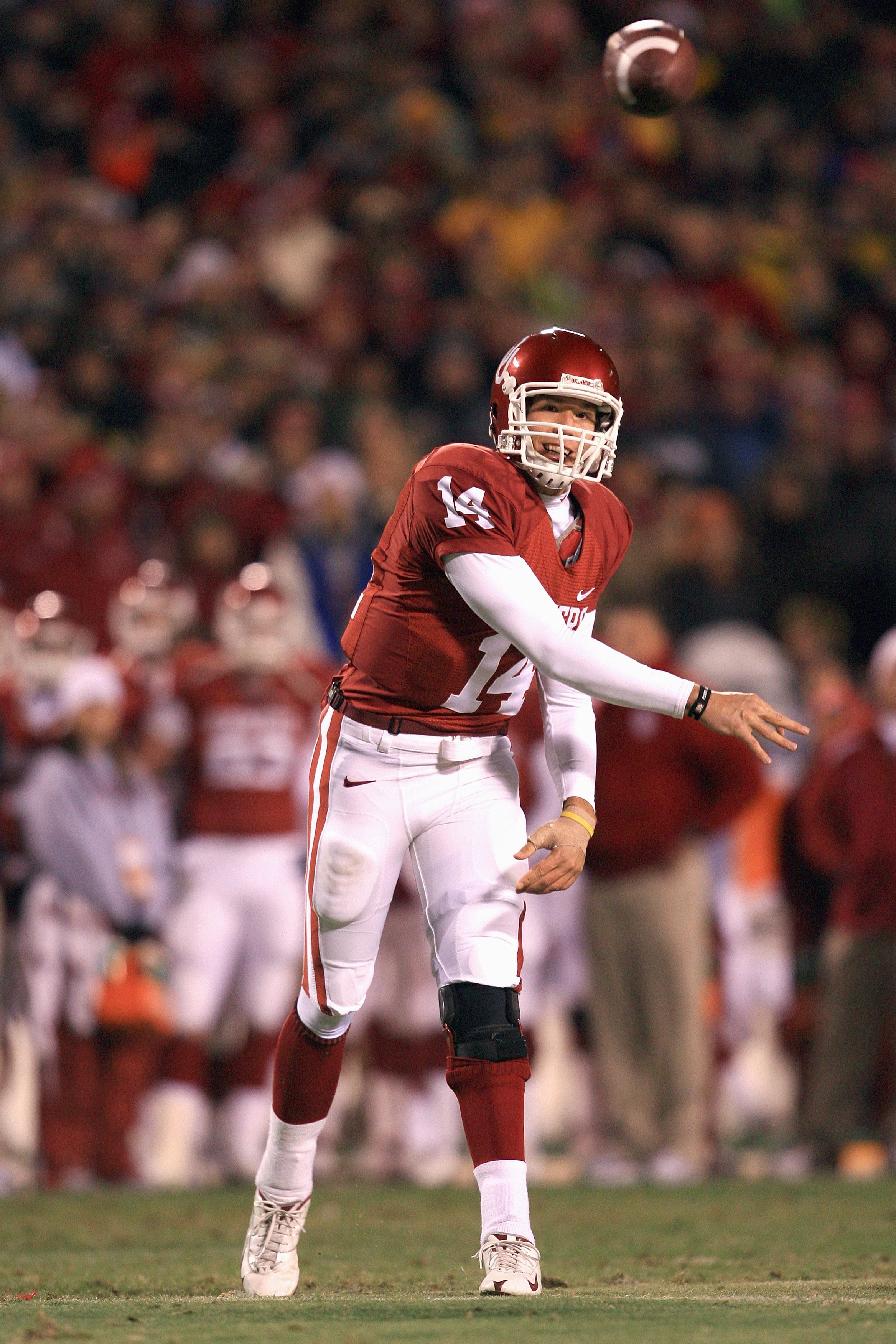 Sam Bradford should be fresh in everyone's mind if you're talking Oklahoma quarterbacks. But he's part of a long lineage of successful passers for the Sooners—though he might be the first to really breakthrough in the pros.

But that's not to say that great college quarterbacks like Jason White, Josh Heupel, Jamelle Holieway, J.C. Watts, Jack Mildren, Charles Thompson and Cale Gundy among others shouldn't be recognized as well. 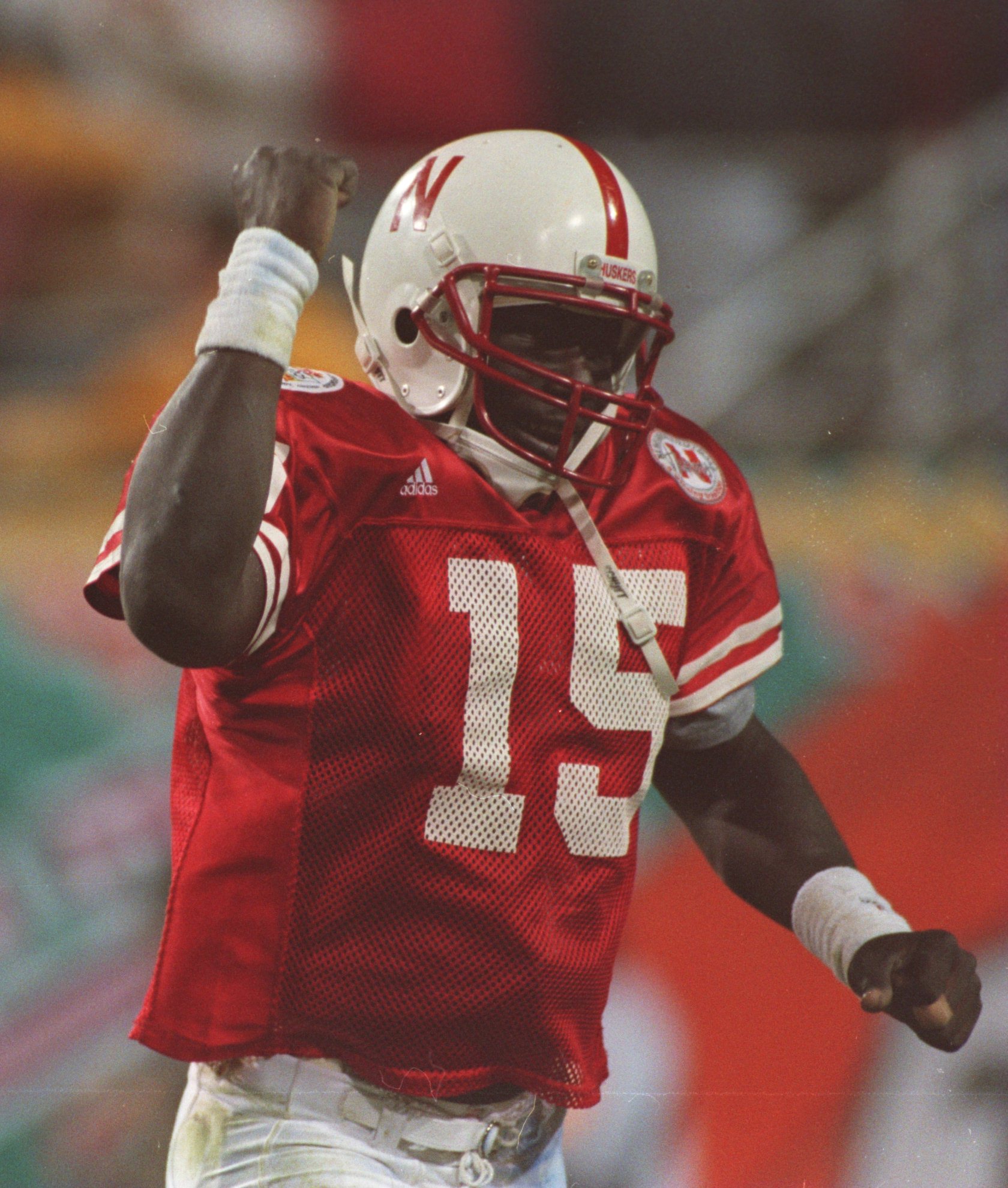 It's shocking that Frazier never won the Heisman, considering he's the best of a long history of a dual-threat quarterbacks. Give Taylor Martinez a couple more years under center and he may be mentioned among them. 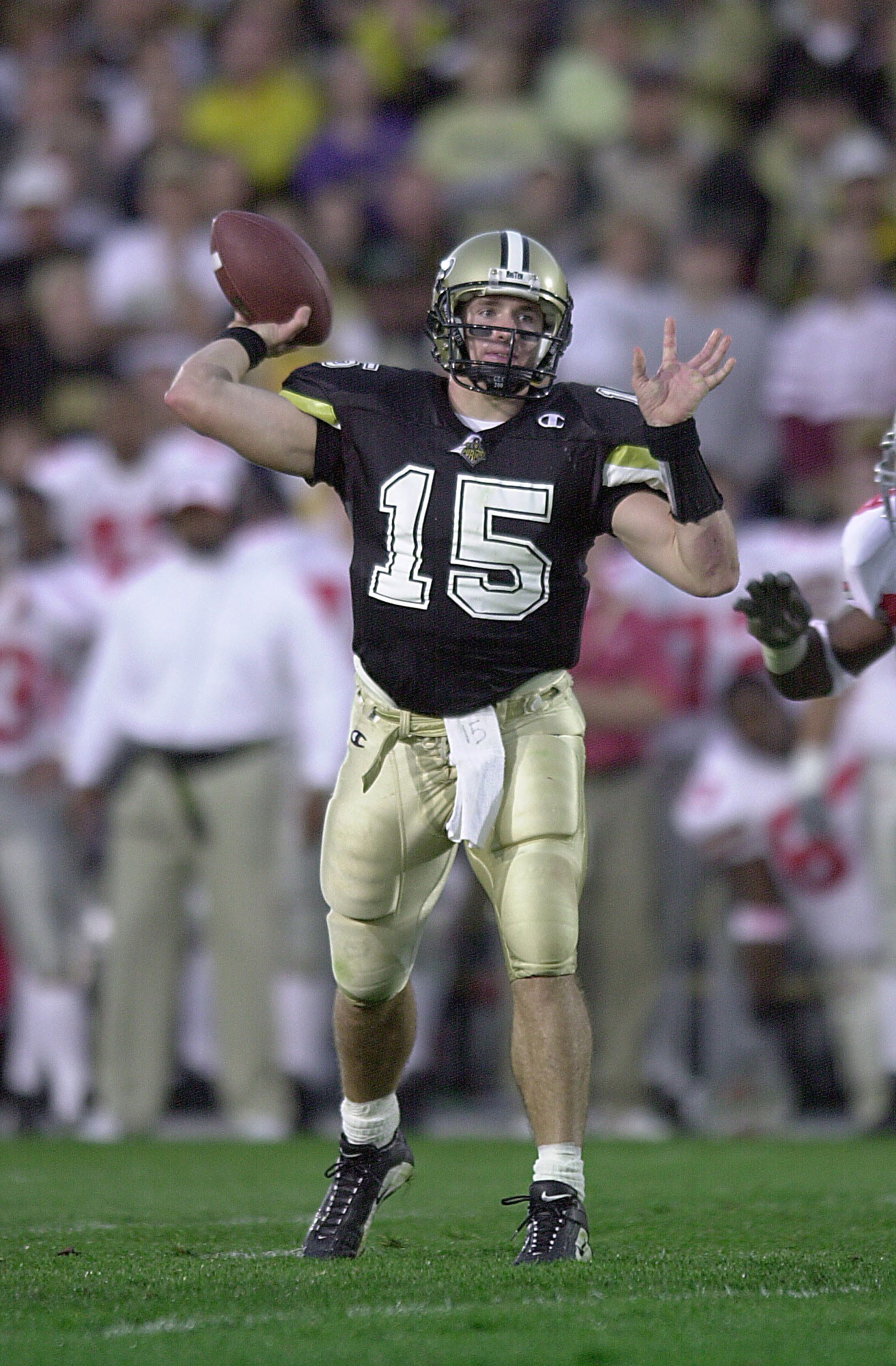 While Purude has done decently at quarterback in recent years, the Boilermakers produced some stellar passers in the past, with Drew Brees and Bob Griese headlining the bunch.

Griese is already an NFL Hall of Famer, and Brees might well be joining him once his days are done. Purdue also has Len Dawson, Jim Everett, Mark Vitali, Scott Campbell, Mike Phipps and Kyle Orton, as well as a handful of others, who make it hard to keep the Boilermakers out of the top 10. 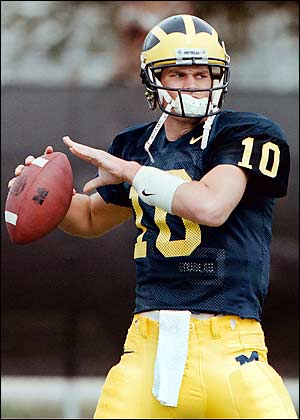 Michigan, like a few others, is fairly new to the discussion, with the great Wolverines at the position all coming in the last 20 years.

From Elvis Grabac in 1989 to Chad Henne in 2008, every Michigan starting quarterback for 19 years made it onto an NFL roster. Of course the greatest of those quarterbacks, future NFL Hall of Famer Tom Brady, wasn't selected until the sixth round of the 2000 draft. We all know how that turned out. 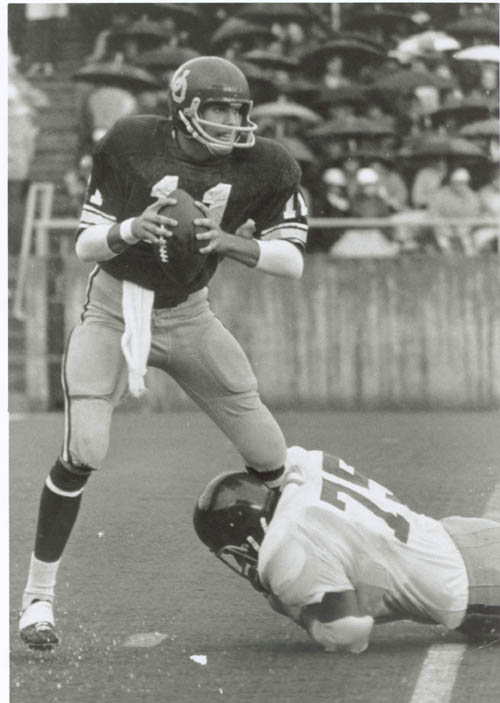 For anyone who's watching Darren Thomas and the Ducks offensive explosion this season, it's really a testament to the school's history of success on that end of the field—particularly at the quarterback position. 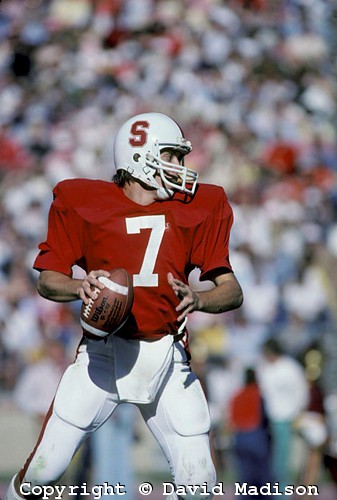 Andrew Luck is a great addition to the tradition of excellent quarterbacking at Stanford. But while the Cardinal have produced more quarterbacks to make NFL rosters than any other school in the country, the drop-off from top-tier quarterbacks like John Elway and Jim Plunkett is pretty severe.

Of course there's Luck, who has a great chance of being the No. 1 overall pick in the 2011 NFL Draft. But quarterbacks like Trent Edwards, Steve Stenstrom, Guy Benjamin, Todd Husak, John Payne and Turk Schonert aren't quite at the level as the top five schools on the list. 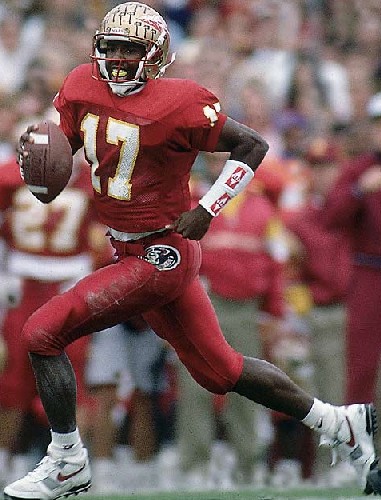 While FSU has had two quarterbacks win the Heisman—Charlie Ward and Chris Weinke—Ward owns the argument for who is the best passer in school history.

One of the most dynamic college players in the second half of the 20th century, Ward bypassed the NFL for the NBA, making Brad Johnson the most successful pro quarterback in school history. But Weinke cannot be overlooked in the slightest. His college resume is probably the most impressive of the bunch. 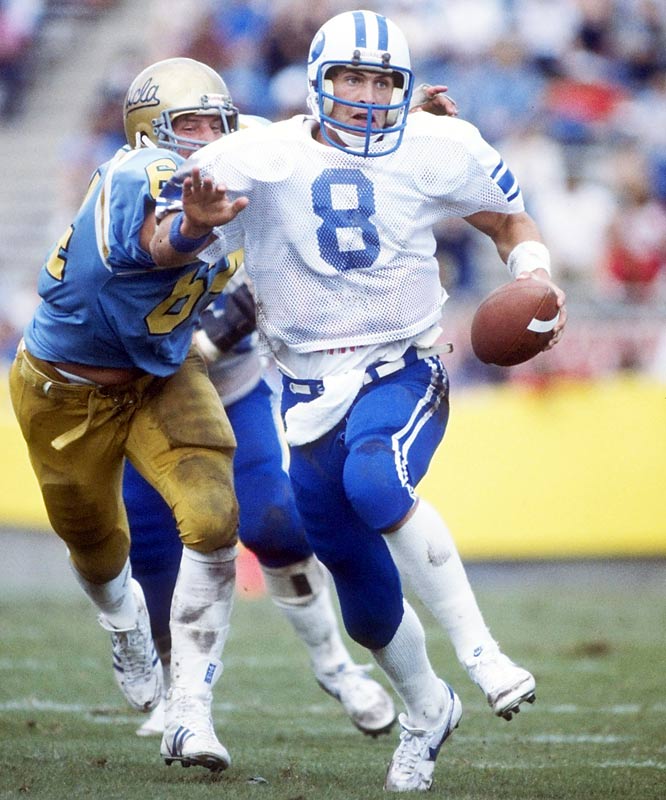 BYU was probably the best quarterback school in the country in the 1970s and 1980s. The All-Americans that came out of this quarterback factory are some of the best to have ever played the game. 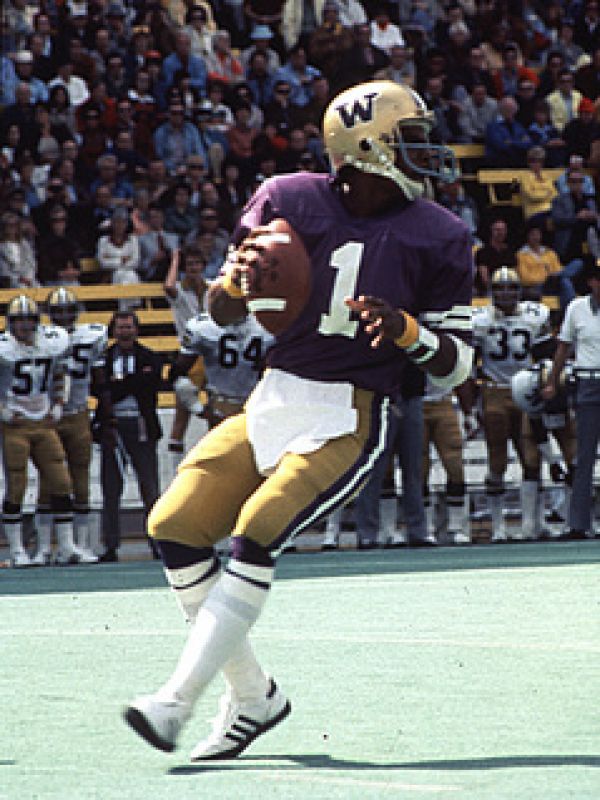 You can't talk about Washington football without mentioning Warren Moon, the greatest player in school history. But he's merely the headliner of a long list of excellent quarterbacks.

Jake Locker is the latest of the Huskies' star passers, joined by the likes of Mark Brunell, Chris Chandler, Marques Tuiasosopo, Brock Huard, Damon Huard, Billy Joe Hobert and Sonny Sixkiller—all of whom are entrenched as legends in Washington football history. 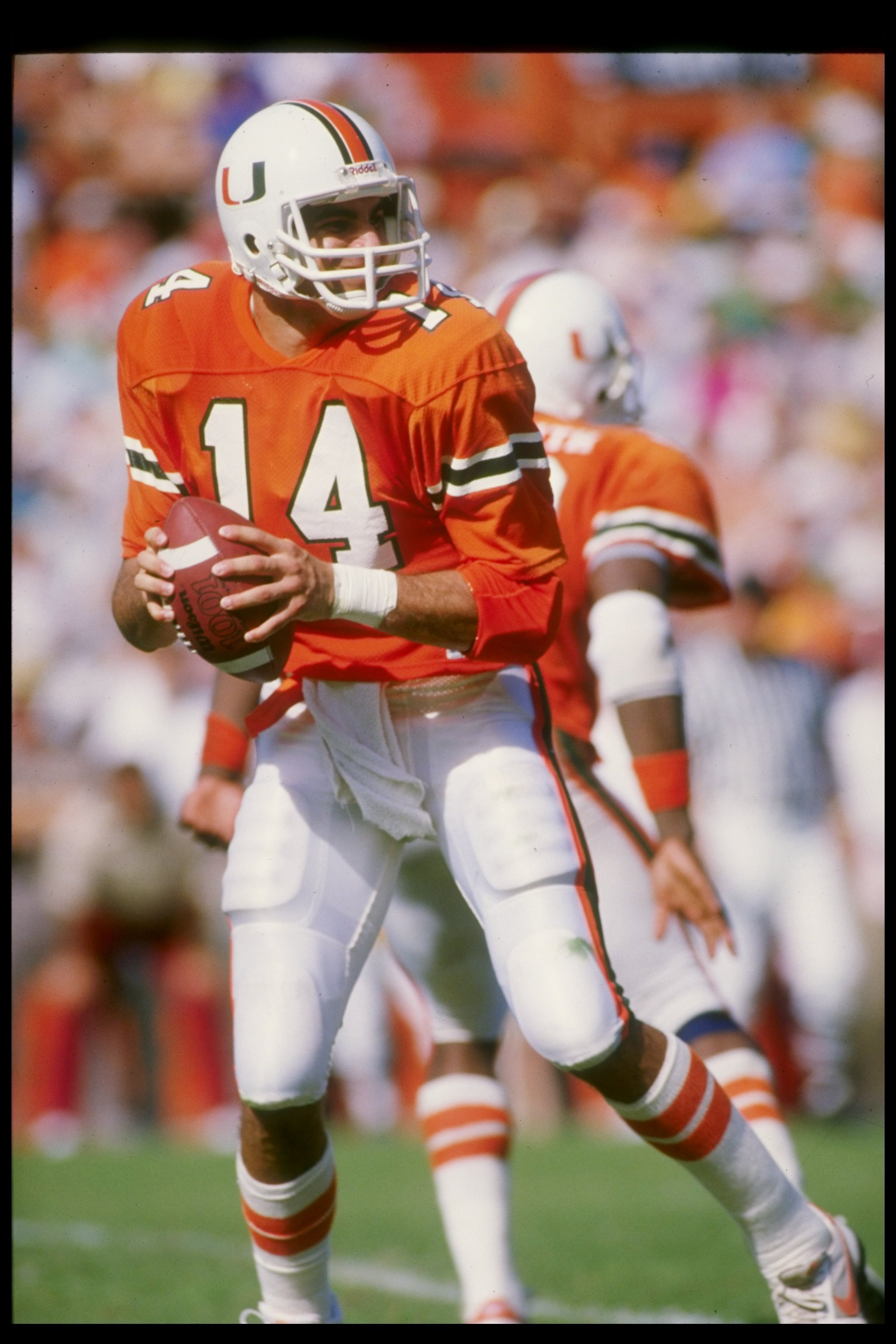 It's a close call between Miami and Notre Dame for the second spot. But we give the Irish a slight edge based on how long they've been doing it for, as well as the greater pro success of their quarterbacks.

Long known as the true Quarterback U, Miami pumped them out with the best of them in the 1980s and 1990s, beginning with Jim Kelly, going through Heisman winners Gino Torretta and Vinny Testaverde, great leaders like Bernie Kosar and Ken Dorsey and even underrated guys like Brock Berlin. 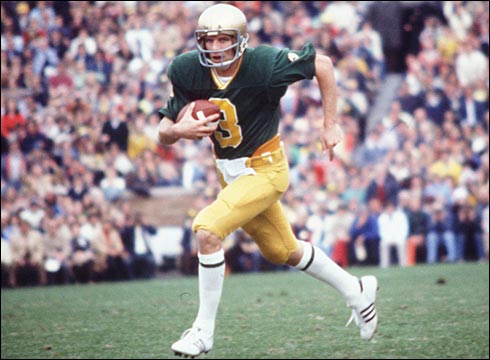 Of all Notre Dame quarterbacks, there might not be anyone you'd rather start a list with than Joe Montana— arguably the greatest quarterback in NFL history.

He and Joe Theismann both went on from great careers in South Bend to win multiple Super Bowls. Steve Beuerlein had a long pro career, Terry Hanraty, Rick Mirer, Brady Quinn, and Jimmy Clausen were all high draft picks, and there are quite a few others who have reached the pinnacle of the college game. 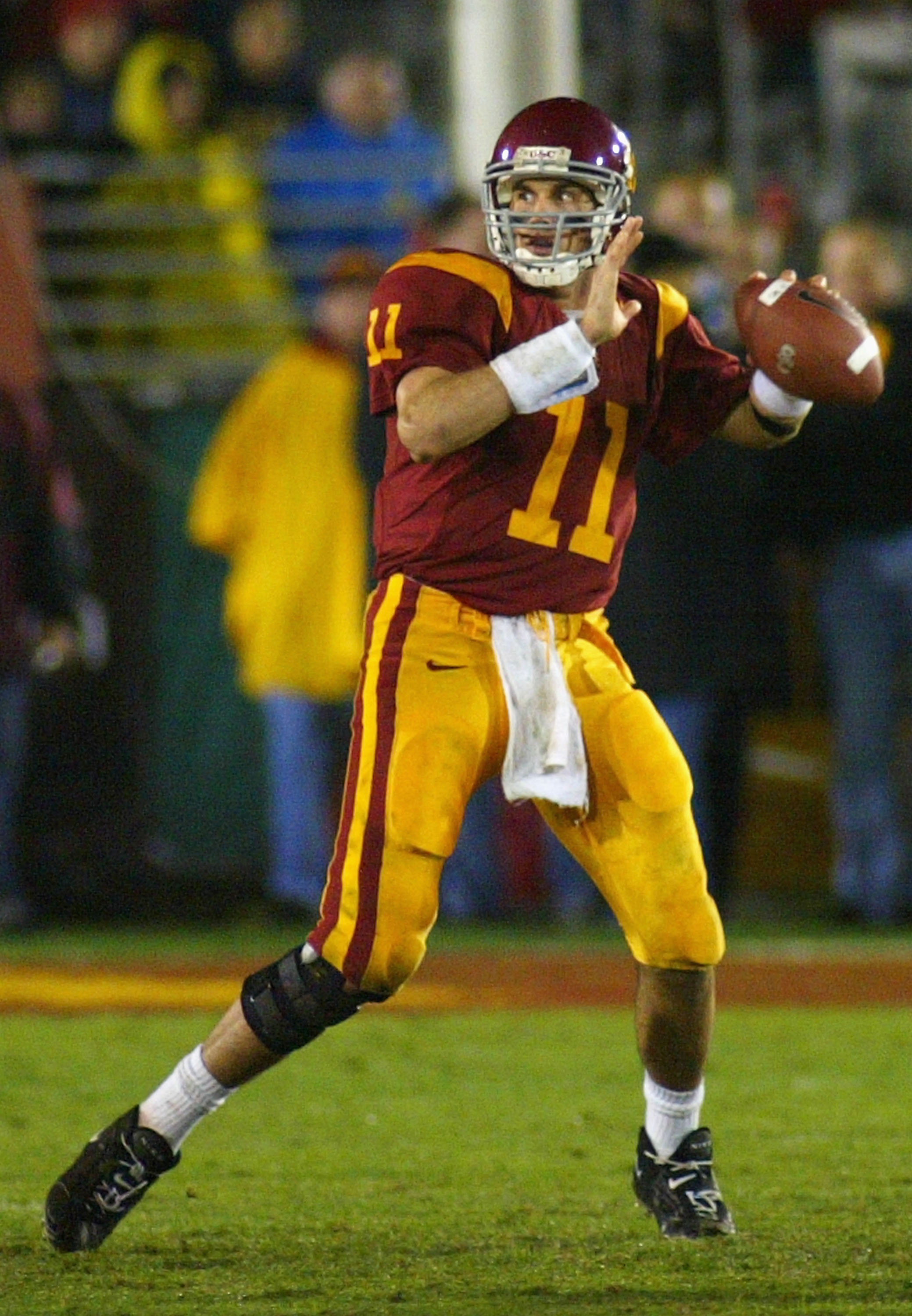 For the No. 1 school on our list, you might expect a long list of greats stretching back decades. But for USC, the excellence in the 21st century has been so great that there's really no denying the Trojans this one.

It began with Carson Palmer, who won the Heisman and a national championship. He was followed by Matt Leinart, who did the same thing. The pair are two of the greatest college quarterbacks of all time, but they aren't alone. There's Mark Sanchez, Paul McDonald, Rob Johnson, Rodney Peete and a few more quarterbacks to back up the argument if you still need convincing.