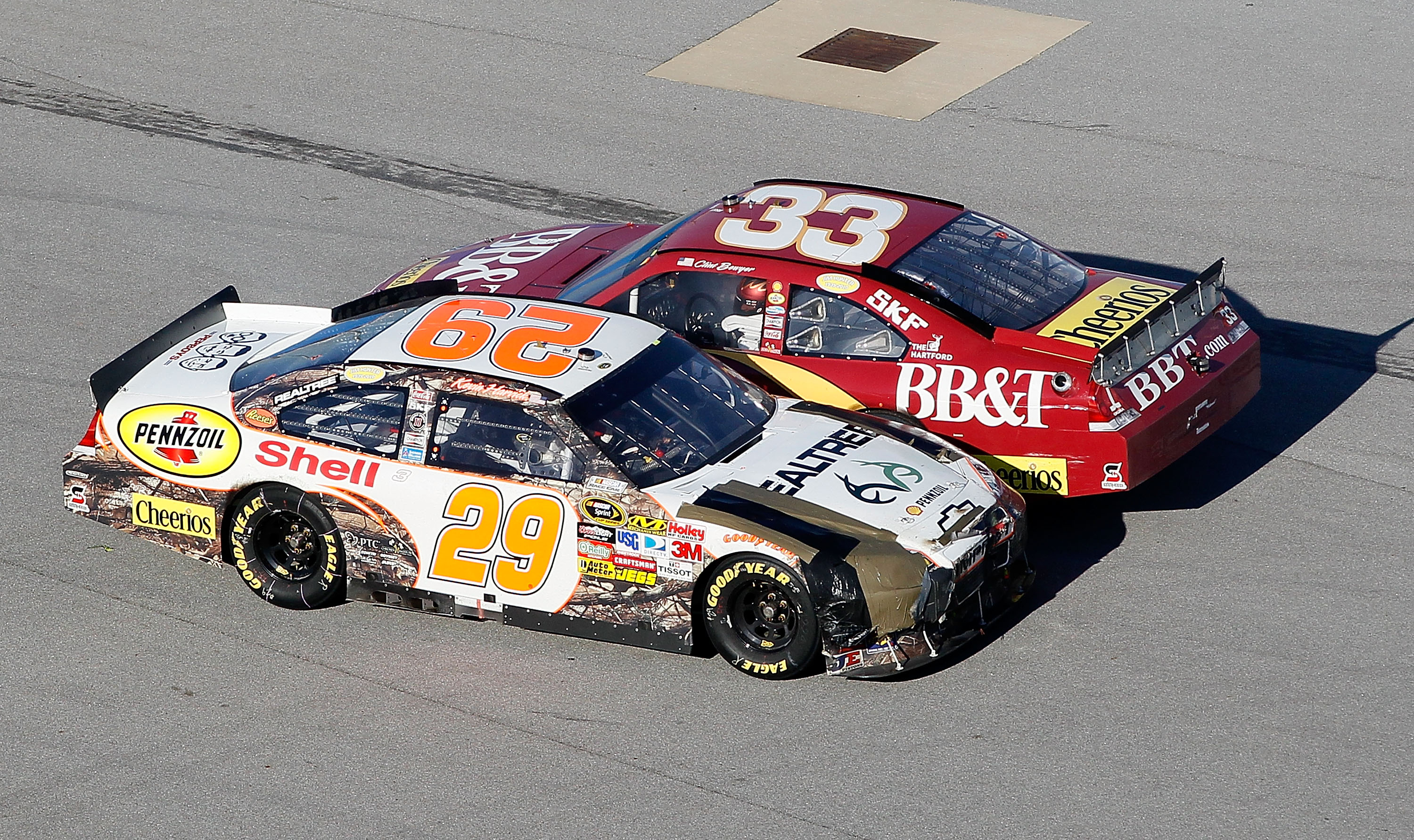 Talladega Superspeedway carries a reputation as the wild card of the Chase for the Sprint Cup, a 2.66-mile high-banked oval on which tight restrictor-plate racing causes havoc for competitors. In particular, all racers fear the big one—a 20-plus car wreck that can (and usually will) end the Chase hopes of a handful of drivers.

This time around, it didn't happen.

Yes, there was a big one, but none of the affected drivers were in the title hunt. In fact, the top three drivers—separated by 62 points combined before the event—left the Alabama track considerably closer to one another in the title hunt, with only three runs to go. Kevin Harvick, third in points, led the brigade with a second place finish. Jimmie Johnson wound up seventh, and Denny Hamlin was listed ninth.

Enough of the general recap. Let's go to the slideshow: 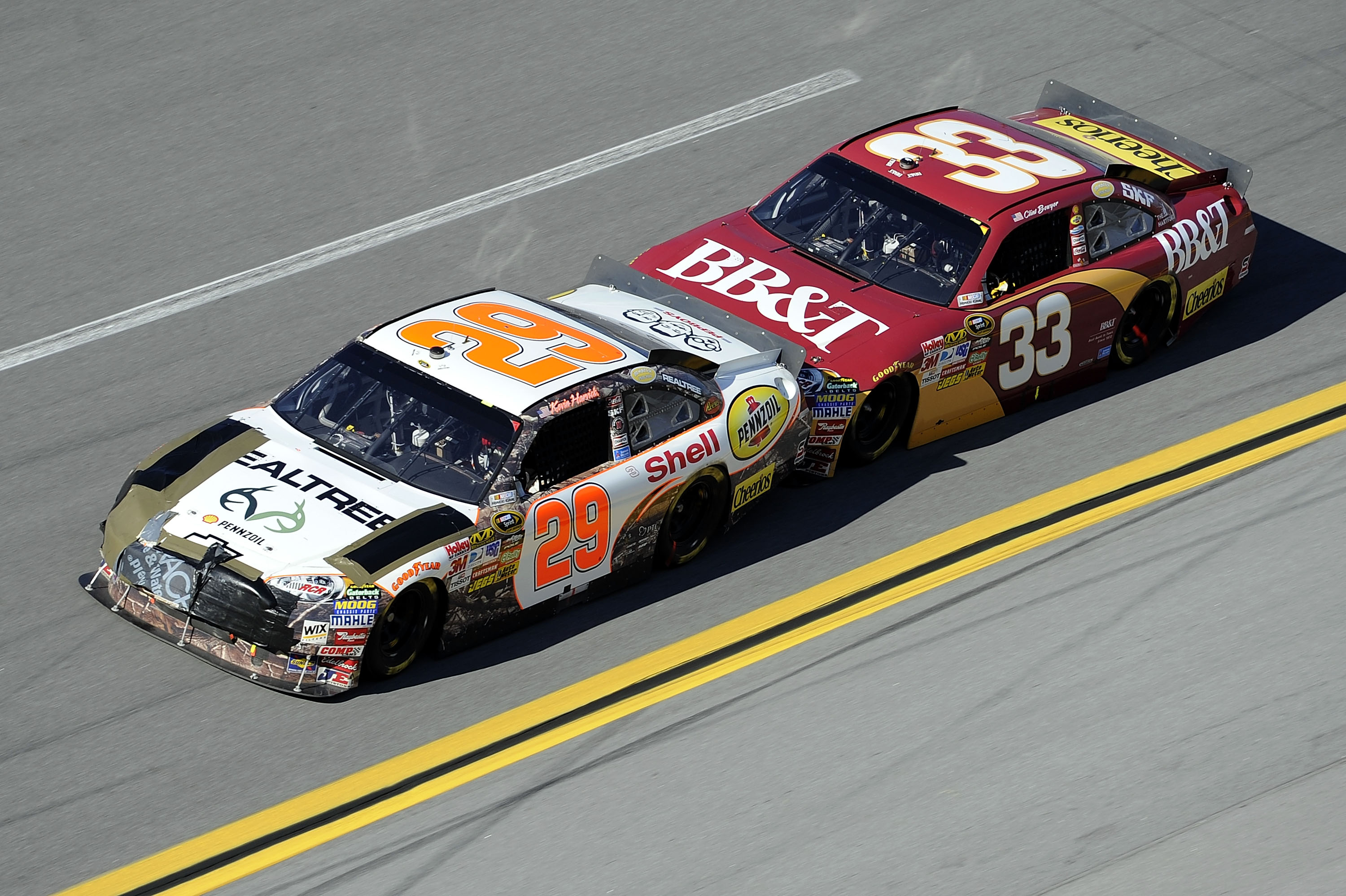 Why does Happy leapfrog both Jimmie Johnson and Denny Hamlin in this week's power rankings?

Simply put, to do what Harvick did—recover from a late wreck with Marcos Ambrose and finish second despite major aerodynamic issues on what is widely known as an aero track—is incredible. He didn't stay out of trouble, but he did manage to recover from it in the way that a championship-caliber driver would. Now, he enters the final three races of the season under 40 points out of the lead, although he would hold the lead by a wide margin in the pre-Chase format.

Texas has yielded Harvick a decent 12.9 average finish, making the 1.5-mile tri-oval the seventh-best track in his Cup career. Also, past Phoenix starts have yielded two wins. But best of all, if Harvick can keep the pressure on to the season finale at Homestead, he stands a good shot at winning. It's his best track, with an 8.4 average finish in nine starts. Only championship non-factor Carl Edwards possesses a better average finish there.

Most of us will view it as a steal if Harvick wins the title, but it could very easily happen. 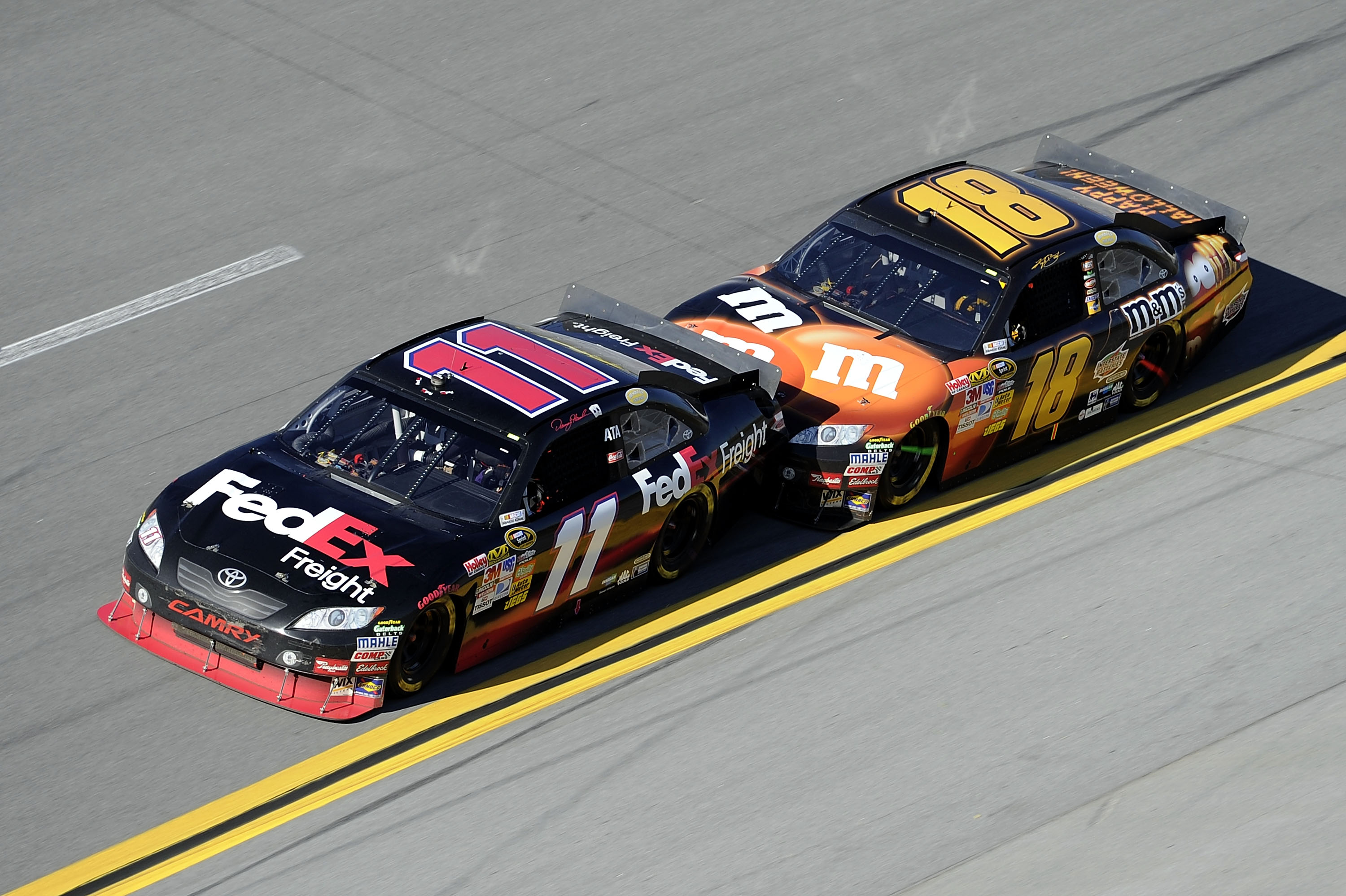 Denny didn't leapfrog Jimmie Johnson in the standings, but he was almost there.

Originally, the race results listed Hamlin seventh and Johnson eighth, before a correction swapped their finishing positions (and later bumped Hamlin down yet another spot).

Had the results stood as originally posted, Hamlin would have cut Johnson's points lead from a slim six to an even slimmer two—meaning Hamlin would take the points lead by simply beating Johnson at Texas, no matter where they finished. Instead, he'll head into that race 14-points back.

Still, the weekend could have been much worse, especially after Hamlin lost the lead pack—and later the lead lap—and had to rely on the lucky-dog pass to get back up front. Crisis averted. Fourteen points is a manageable deficit. 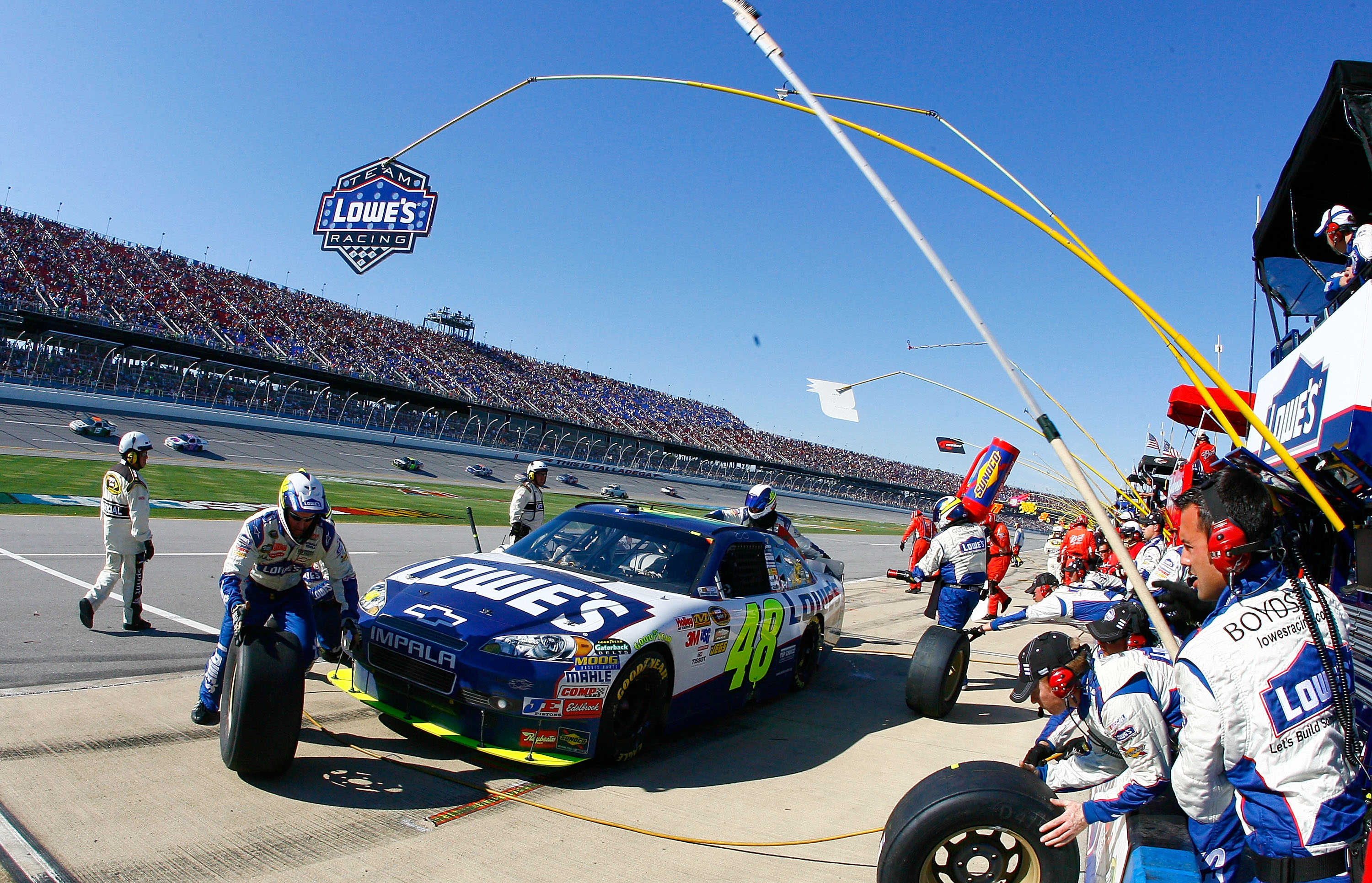 I'm going to eat my words for ranking Johnson third, for sure. But we've learned over the past few weeks that he is, indeed, vulnerable. That, or I'm going to eat them for coining the No. 48 team "Death and Taxes."

Only a scoring correction kept next week's event from being a high-pressure head-to-head matchup with Denny Hamlin, with the points lead going to whoever finished ahead of the other. His lead is still a fragile 14 points heading into these final three races.

Johnson and crew chief Chad Knaus never said that five in a row would be easy. Perhaps we cynics should have listened. 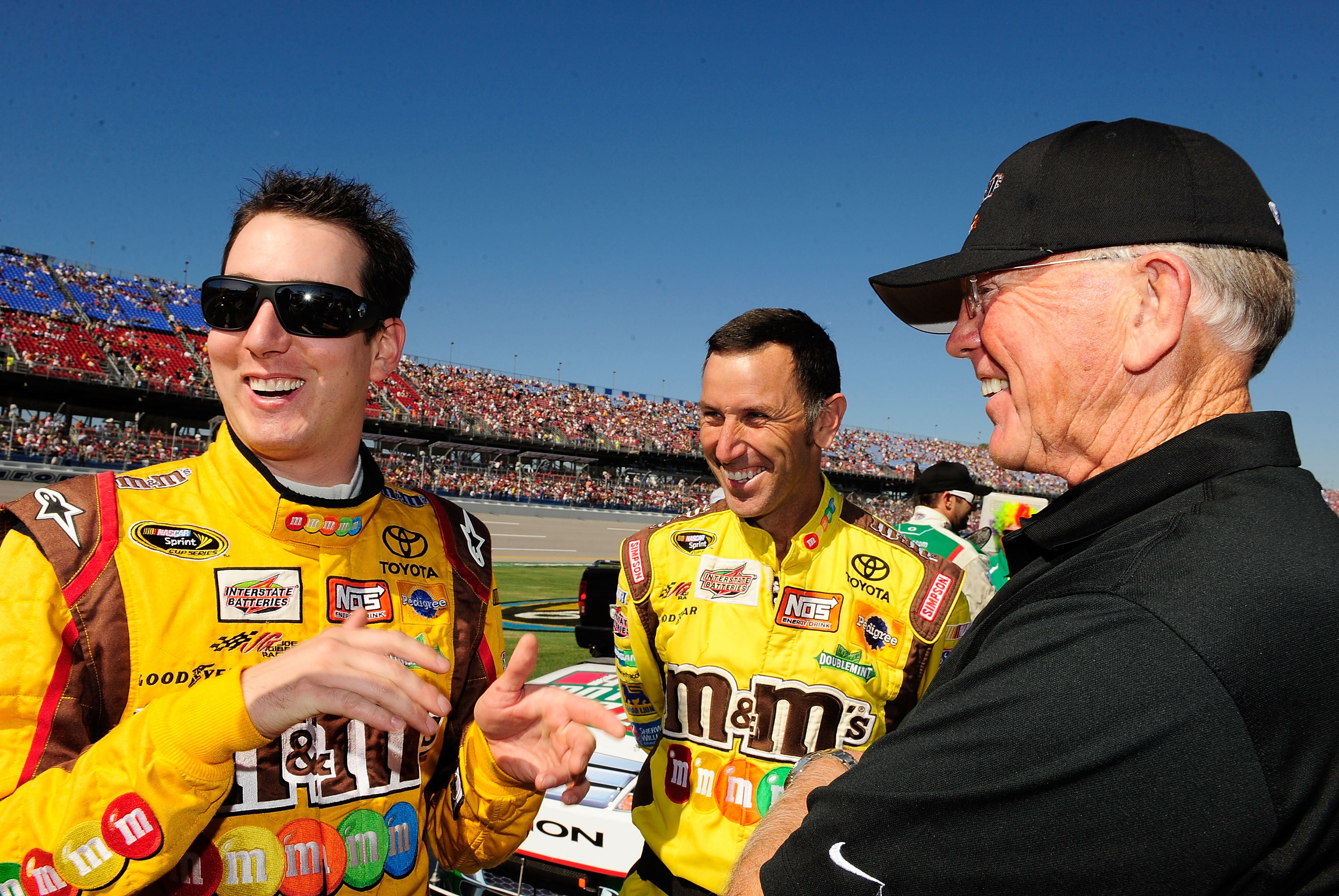 A 25th-place finish after a 32nd-place start, but that's Talladega for you. Busch worked well with teammate Denny Hamlin in the late going, putting a car that had struggled all day back up front. He also won the Camping World Truck Series event at the track, with a last-second pass of Aric Almirola.

But the necessary wreck that would have had to happen to the three championship contenders ahead of him did not happen. Nor did Rowdy win the prize event of the weekend, as he would have needed to. As such, his championship hopes are all but gone.

Same goes for the rest of these guys. 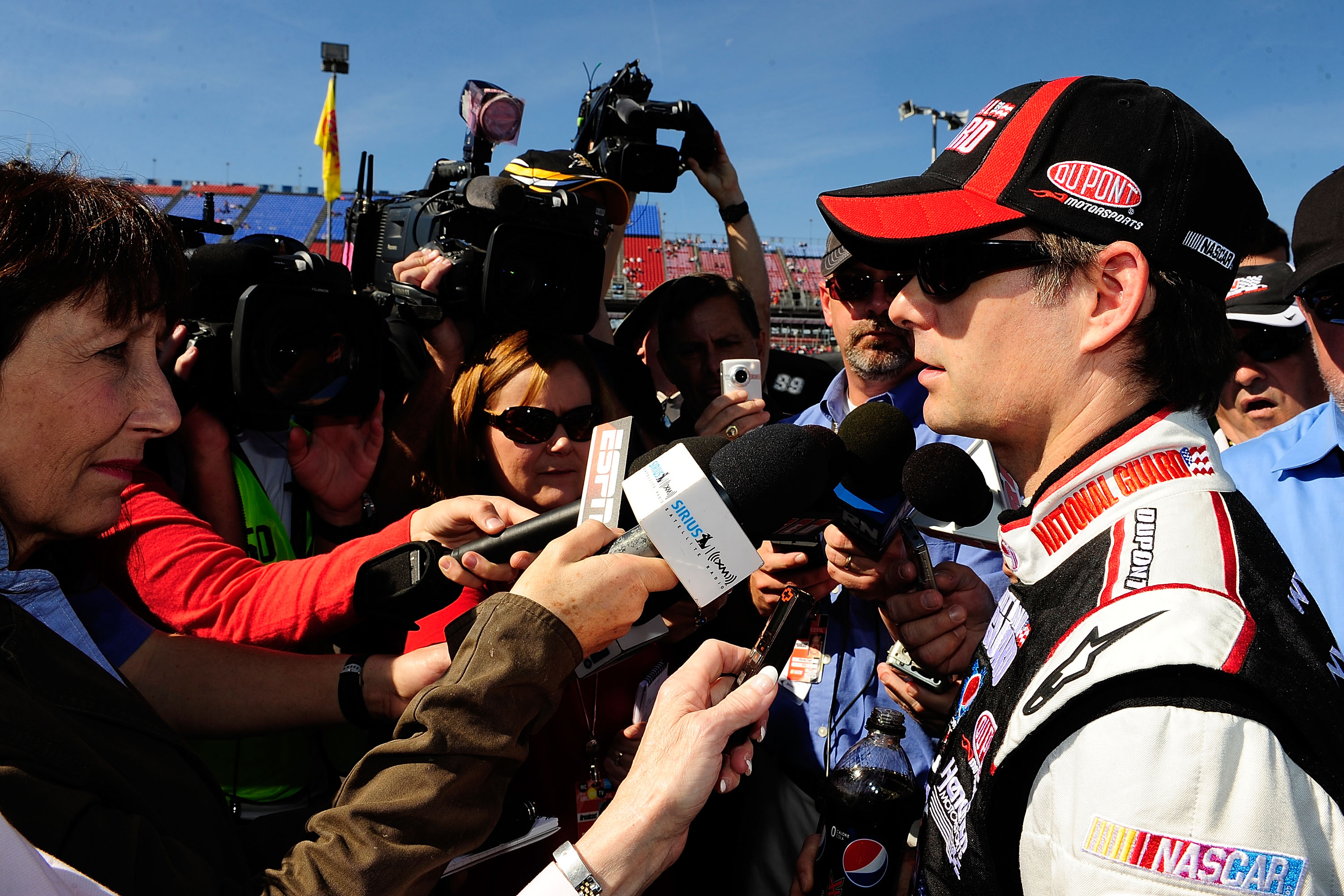 Gordon finished a solid eighth at Talladega despite nearly losing his engine in the race's closing laps. He also climbed to fourth in points with the finish. But bigger news from the weekend was the announcement of a new sponsorship deal for the No. 24 car for the next few years.

The AARP Foundation and Hendrick Motorsports have teamed up to establish the Drive to End Hunger, which will back Gordon for the majority of next season's Sprint Cup events. The deal is the first of its kind in NASCAR—a major charitable initiative ponying up to back a race team for more than just a one-off event or a handful of runs. 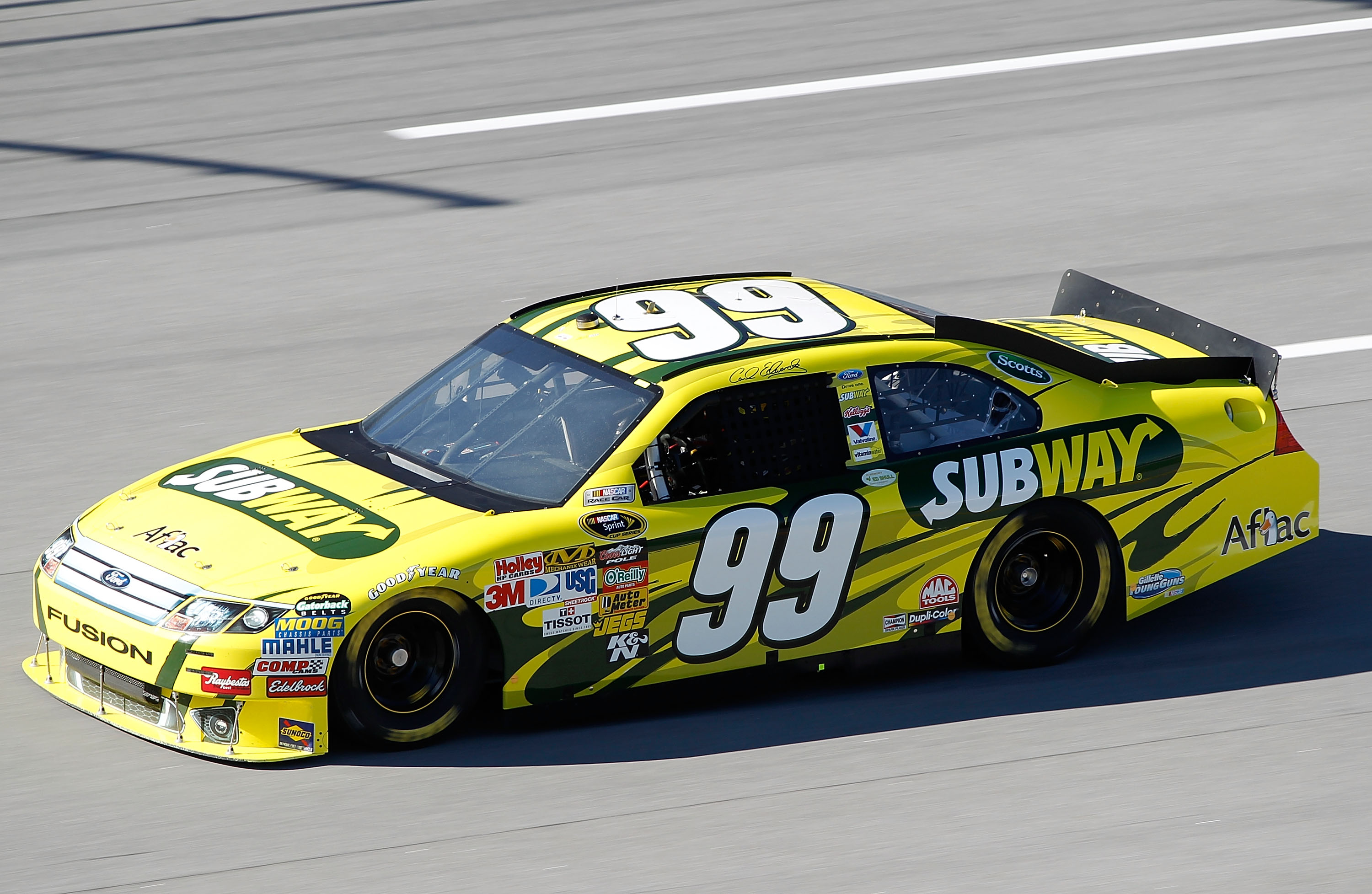 Edwards finished 17th at Talladega after a 23rd place start. His Sprint Cup winless-streak now extends through 69 races, dating back to Homestead in 2008.

Edwards is also second in the Nationwide standings, 485 points back of leader (and the man who once sent him airborne at Talladega) Brad Keselowski. 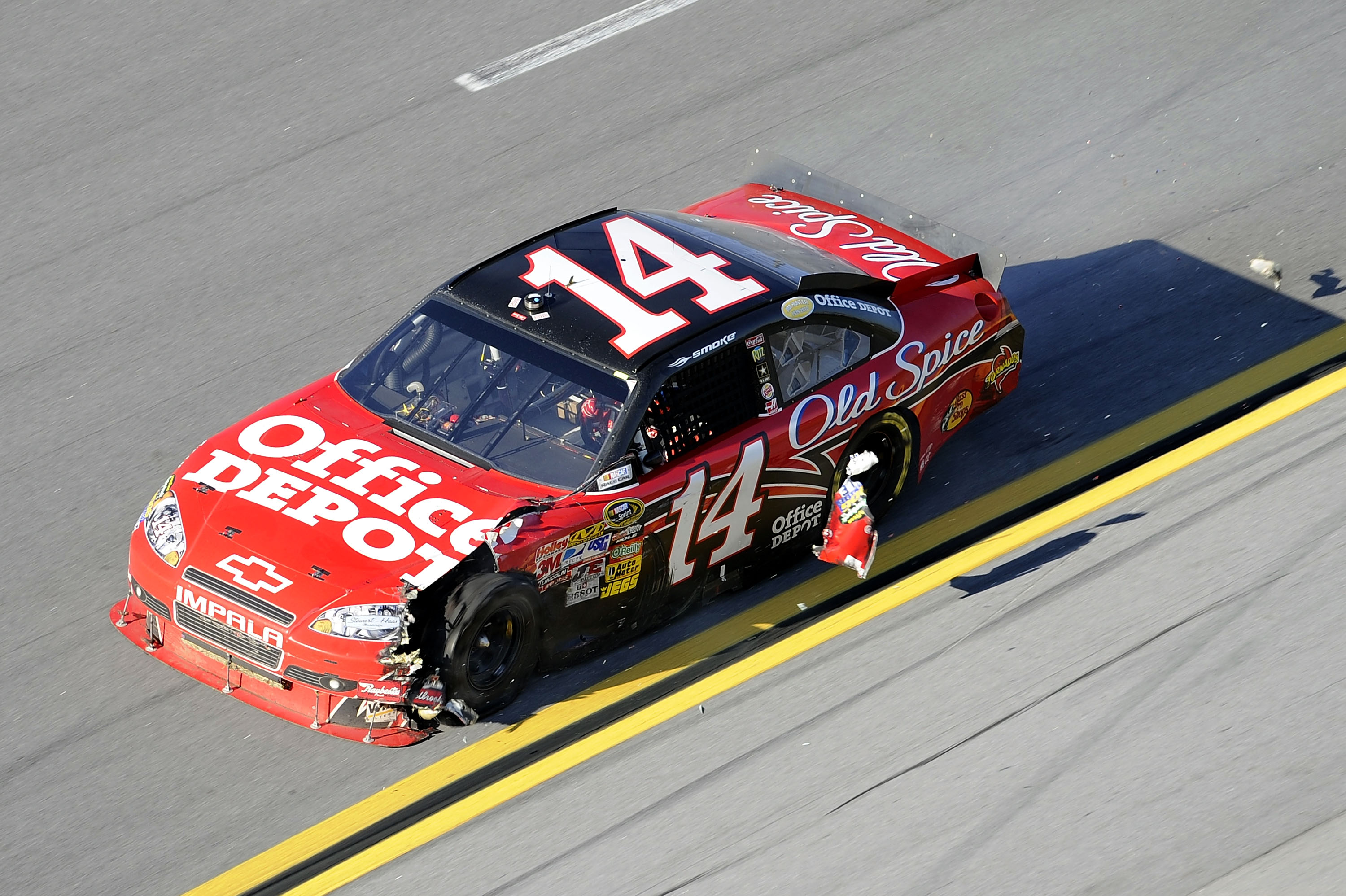 If you're looking for statistics though, Smoke placed 31st in the race, the last driver listed on the lead lap. He remains seventh in points, as he was last week. But he only has seven points on his closest predator, Matt Kenseth. 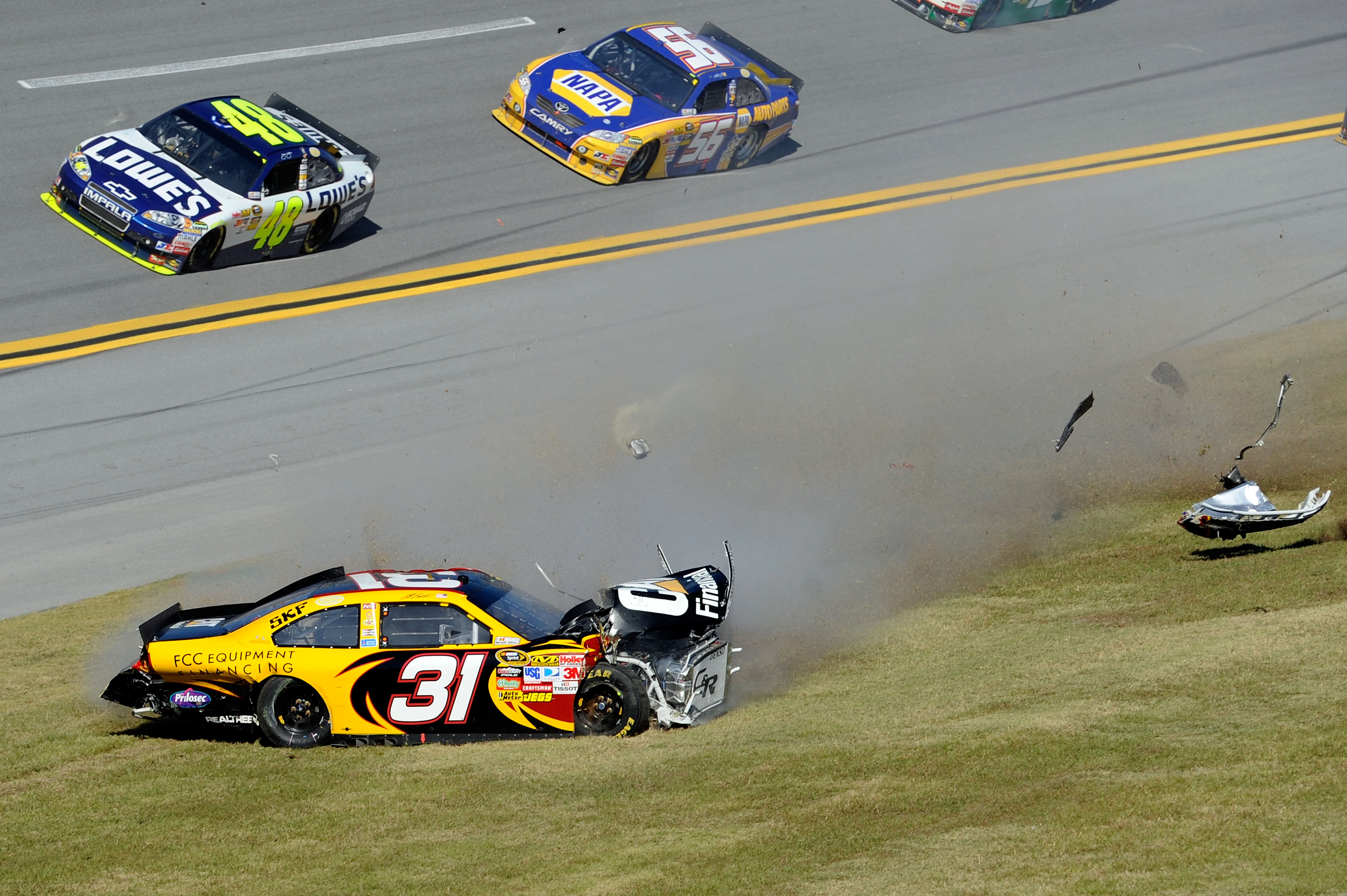 Once again, Burton possessed a great car only to have bad luck stand in the way of a solid run. This time, the cause was a bad bump from Dale Earnhardt Jr., who had previously been working well with Burton.

The No. 31 team now sits only 15 points ahead of last place in the Chase and hangs onto 10th in points—the final table spot at the end-of-season awards banquet—by only nine. Things are getting tight back there. But Burton and his RCR teammates have proven themselves formidable thus far in the Chase, and even with bad luck, they should be able to rebound. 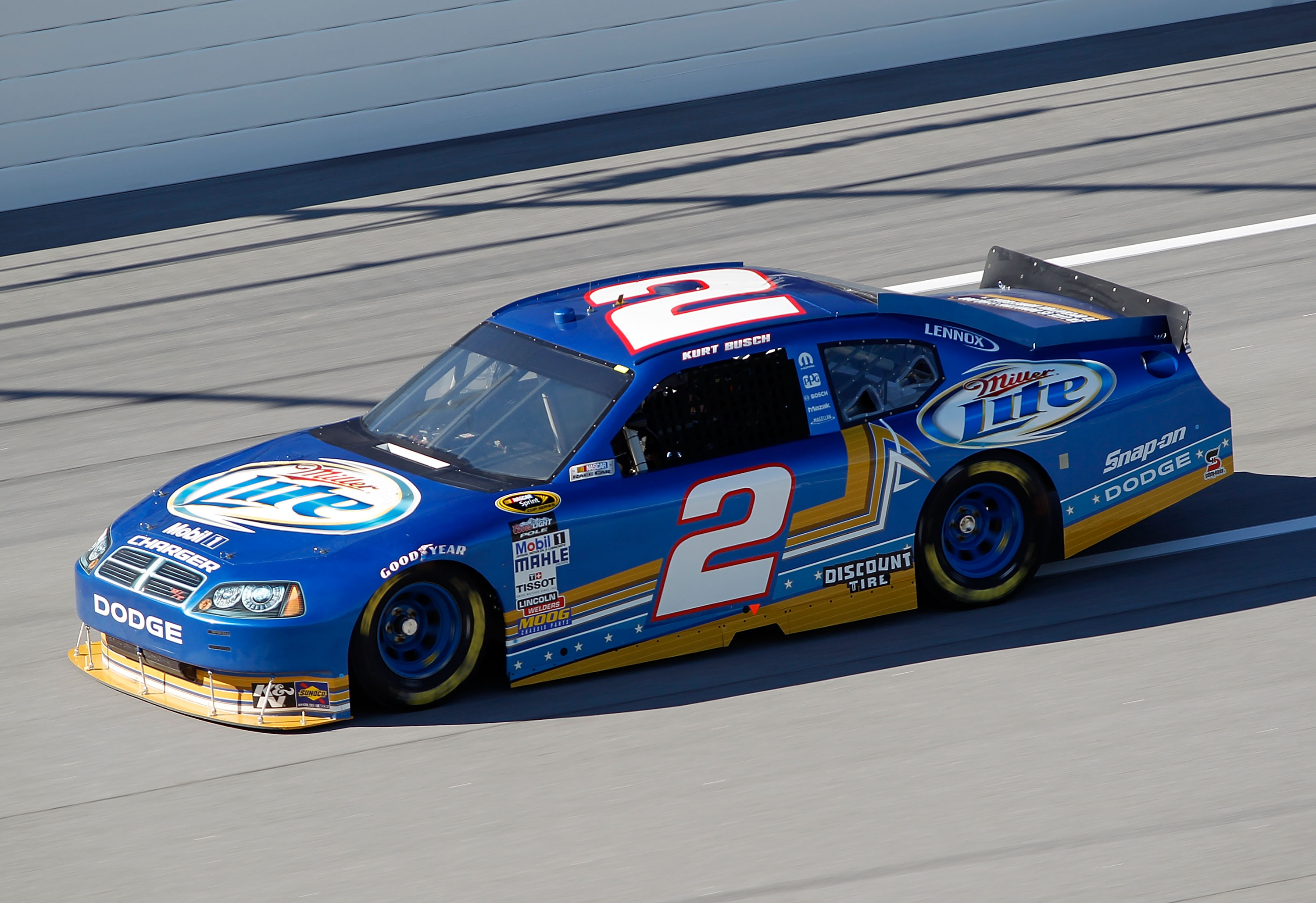 My personal pick for the weekend, Busch was anything but his normal restrictor-plate self in the final plate race of the season.

A third-place start turned into a 30th -finish—not exactly the kind of run anybody expected from the 2004 champion. Busch now sits 350 back of the lead, ninth in points. 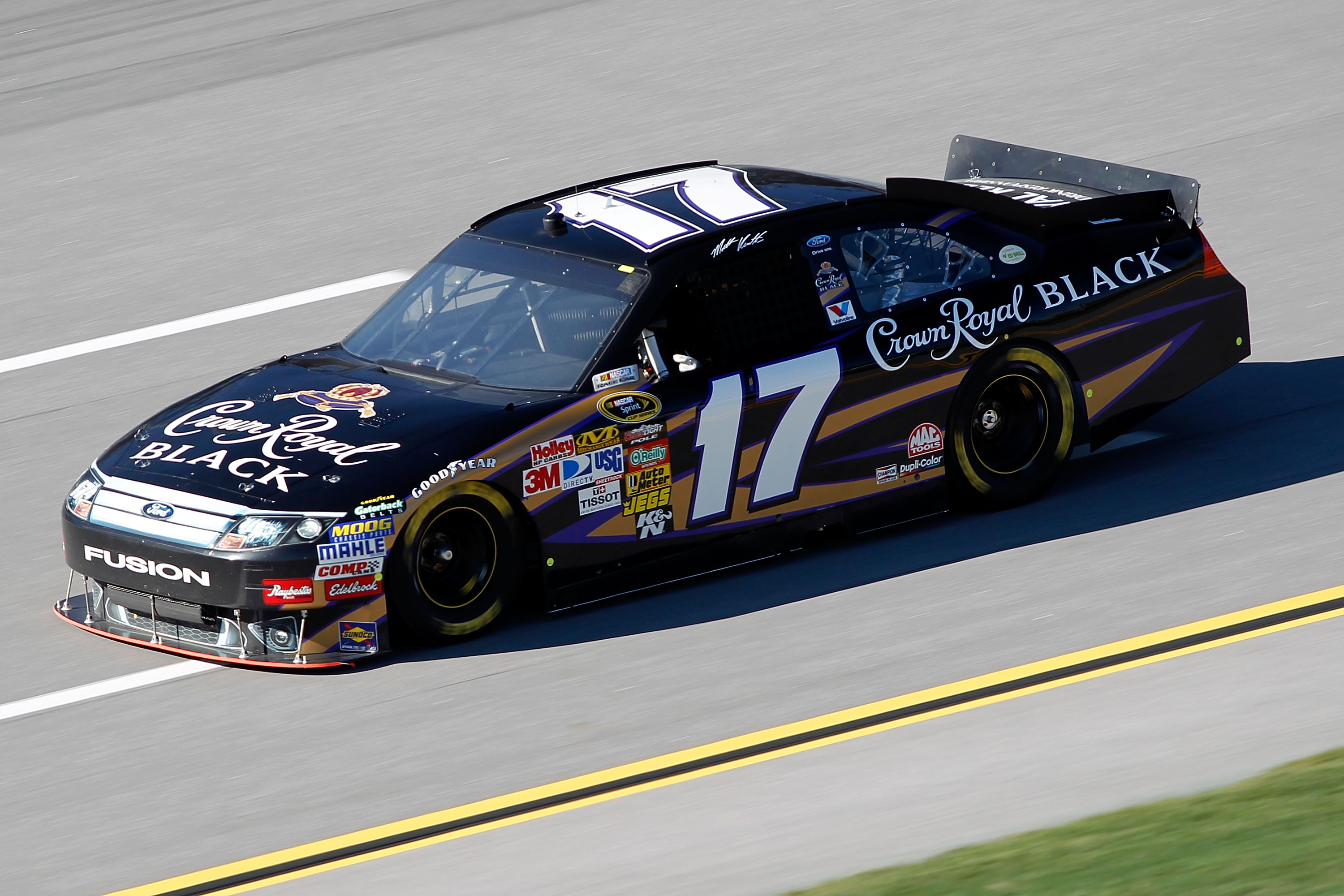 With a 16th-place run, Kenseth now sits eighth in points, seven back of Tony Stewart for seventh. Kenseth was not once a title contender since slipping into the Chase, but at least he's doing his part to hold onto a seat at the end-of-season awards banquet. 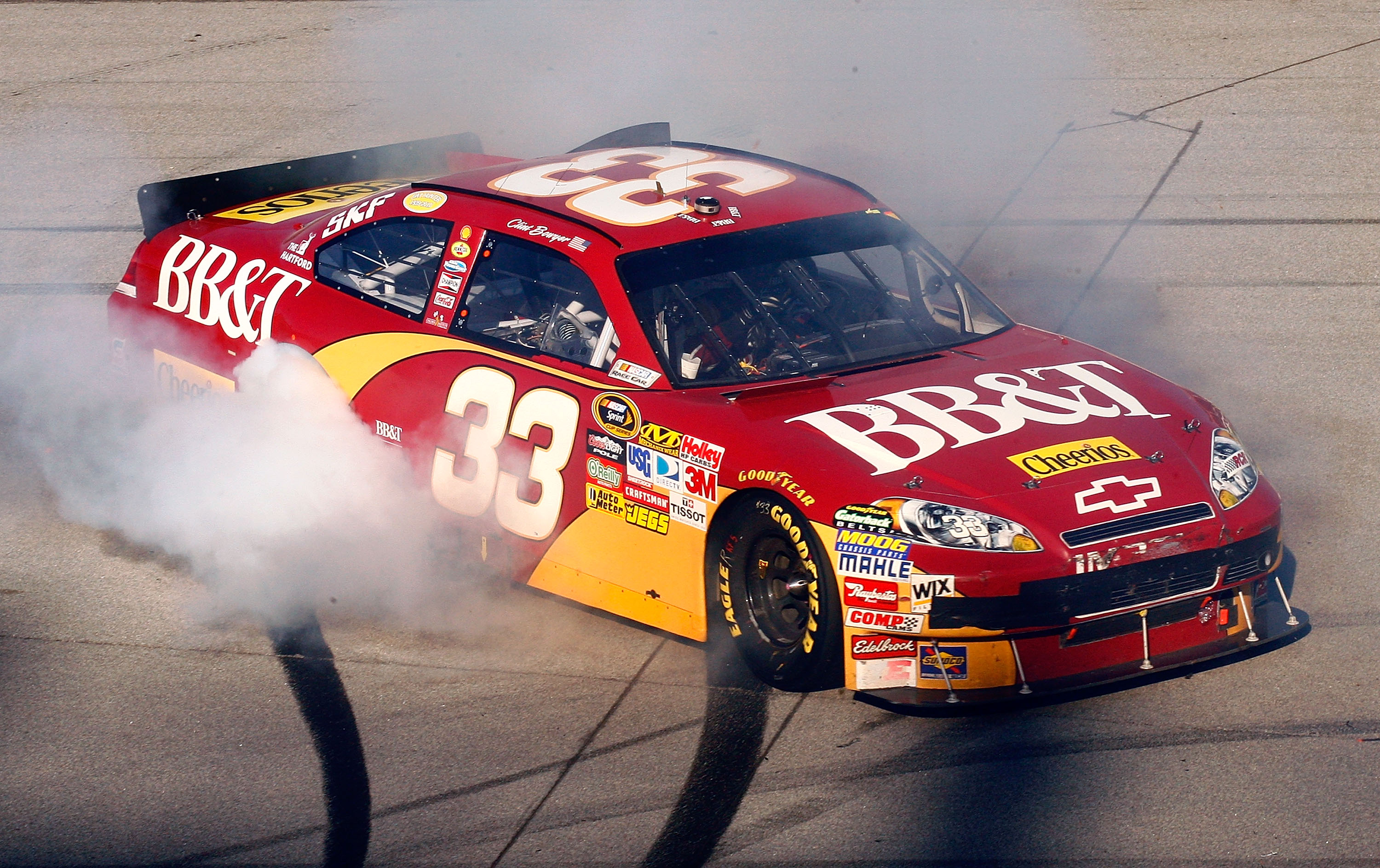 Finally, Bowyer moves up in the power rankings! The win, his second of the Chase, brings him within six points of 11th-place Greg Biffle in the standings and within 15 of a spot at the championship banquet.

Nice job selling NASCAR on the win by starting the burnouts before they gave him the win. That was a nice (and convincing) touch. 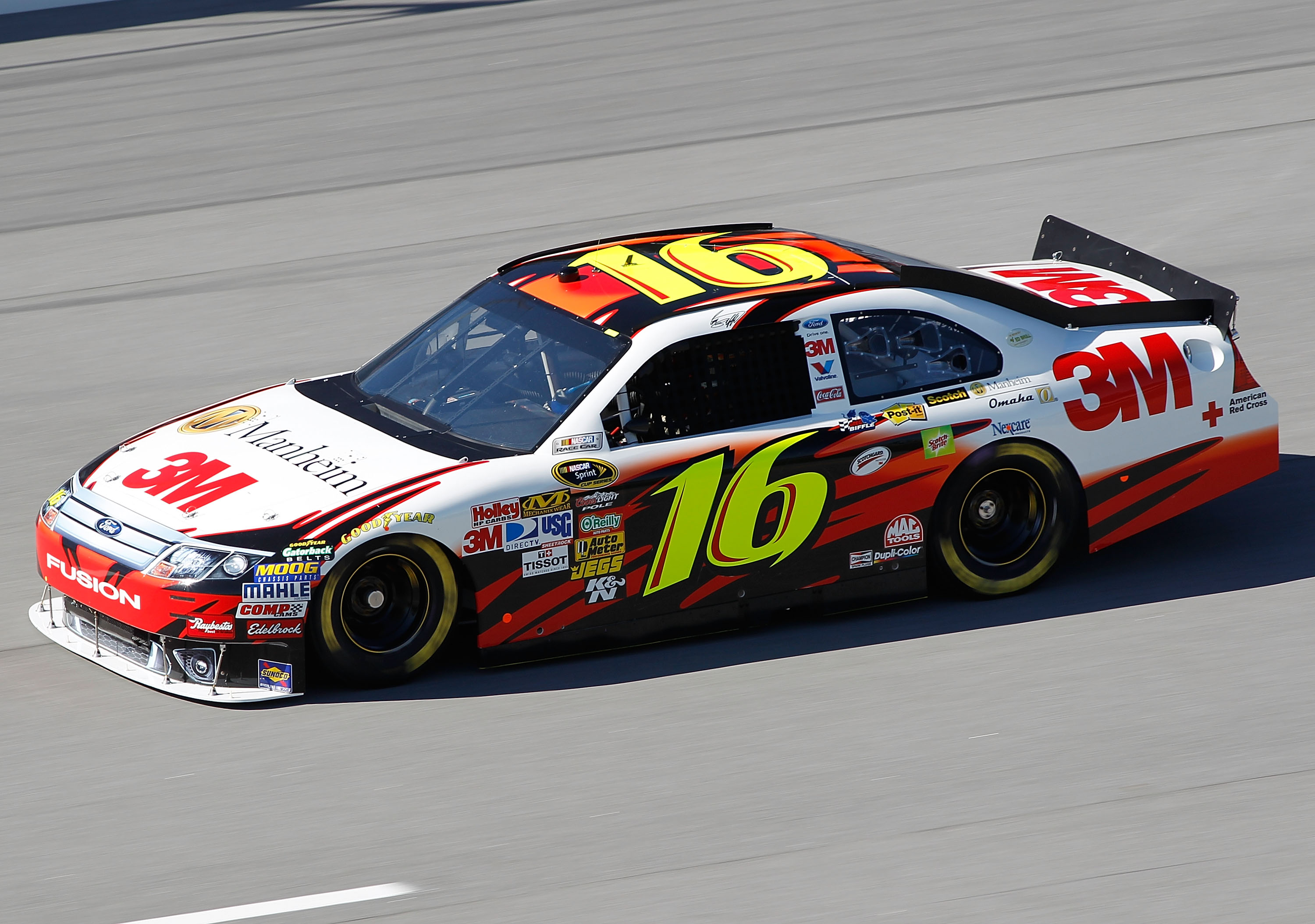 Remember how I kept saying that I forgot Jeff Burton was even in the Chase about a month or so ago? Well, now I keep forgetting Biffle's in it. So much for that win, huh? (I guarantee you that half of you are wondering what win I'm even referring to. I'm not going to tell you because that is my point exactly.)

That's all for this week. Have a good one everybody, and enjoy the Texas race!