It's been a great week for some good ol' Jayhawk bashing.

First we run across the amusing fact that kU displays a Big 12 North Co-Champs trophy in their football complex.  That post generated a lively discussion thanks to some very enthusiastic and very defensive beakers fans who contributed greatly to the over-20 comments we received.

Then there was the wonderful "kU Real Men of Genius" submission from Mizzourah reader Mary, and finally, another solid "Hot Chicks with k.u.chebags" post from Sleazy.  A fine week for the boys in red and blue.

Fortunately, the fun doesn't end there.

First, one of Bill Self's blue chip recruits, Markieff Morris, was charged with shooting a 47-year-old woman with a BB gun from the window of his dorm room at Jayhawk Towers.

I'm going to resist questioning the character of a person that would shoot an innocent bystander with any sort of gun and ask the more obvious question: What kind of kid brings a BB gun to college in the first place?  You're going to college, not the first day of fifth grade.  Maybe Self actually recruited Ralphie Parker from "A Christmas Story." 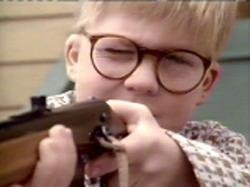 And no, we're still not done.  We also have this report that three kU B-ballers, including guard Sherron Collins, were missing from the beakers' first practice of the year.  Markieff and his twin brother Marcus were out because they have yet to gain eligibility, but Self said Collins was missing because he "is not in good enough shape to practice."

Isn't the whole point of preseason practices so you can get into shape?  So Collins is in too bad of shape to even begin getting back into shape?  I've never heard of that until now.

What could this guy possibly look like?  I understand after winning a National Championship you're going to tend to live it up a little, but come on Sherron.  Pull yourself together, or you're gonna end up looking like this guy: