Oakland Raiders: Special Teams And Michael Huff Step Up To Get It Done 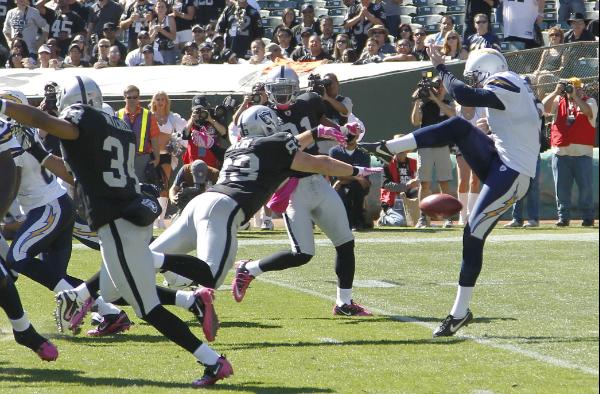 Brandon Myers gets the second punt block of the day for the Raiders.

Six and a half years of misery came to an end Sunday afternoon in Oakland California as the Oakland Raiders rode great special teams play to a 35-27 victory over their division rival, the San Diego Chargers.

Philip Rivers and the Chargers' passing attack went virtually unchecked, San Diego out gained the Raiders 506 to 279, and created many worrisome moments for Raider Nation.

Despite an injury to starting quarterback Bruce Gradkowski and surrendering an early lead, Tom Cable kept his team motivated and focused, and a few unlikely heroes emerged for the Silver and Black.

A few players that were playing below their potential stepped up and helped lead the Raiders to victory.

This slide show will highlight only some of those that led the Raiders to victory. 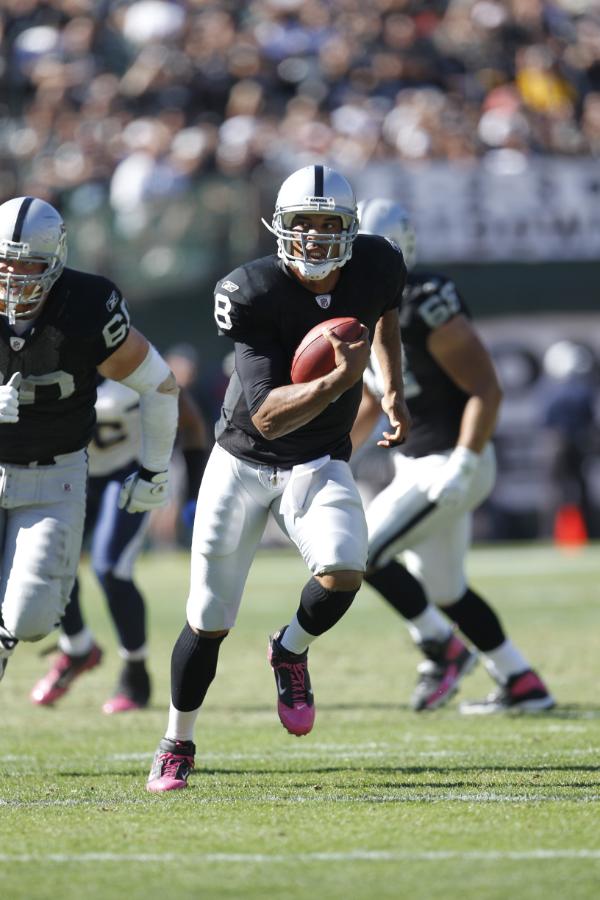 Jason Campbell came off the bench and played well.

When Gradkowski went down with a shoulder injury early in the game, Jason Campbell came off the bench and went 13-18 for 159 yards and one touchdown.

Not Pro-Bowl numbers, but good enough to sustain offense and win the game.

Depending upon the severity of the injury to Gradkowski, Campbell may see more time under center for the Raiders.

Did Campbell do enough to win the job back for good? Who knows?

All I have to say is—Quarterback controversy anyone? 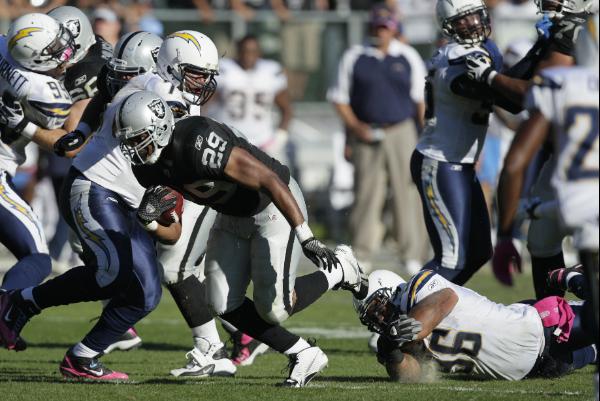 Michael Bush had a great day in place of Darren McFadden.

Returning from a thumb injury, Michael Bush did more than simply "hold down the fort" in Darren McFadden's absence, he played very well.

26 carries for 104 yards, one touchdown, and three catches for 31 yards is more than a solid day against a pretty tough Chargers defense.

If both of the Raider running backs can get healthy—at the same time—Oakland will have themselves an awesome one-two punch in the backfield. 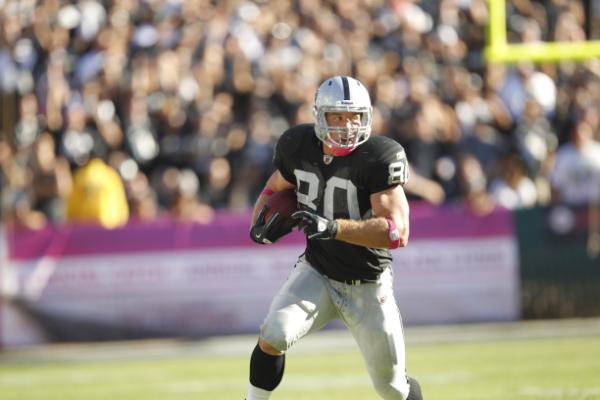 Zach Miller may be the best tight end in the NFL that no one knows about.

Sterling Sharpe made a comment about Zach Miller on his NFL Network show, "Playbook."

To paraphrase: "Zach Miller may be the best NFL tight end that you've never heard of. In fact, he could be the best tight end on the field Sunday when the Raiders play the Chargers."

I don't know if Miller is better than Antonio Gates, but he's definitely in the conversation of five best tight ends in the AFC.

Miller was once again the Raiders' leading receiver with six catches, 62 yards and the Raiders' only passing touchdown on the day.

Whether he's the best in the league or not, Miller is arguably the best offensive weapon the Raiders have. 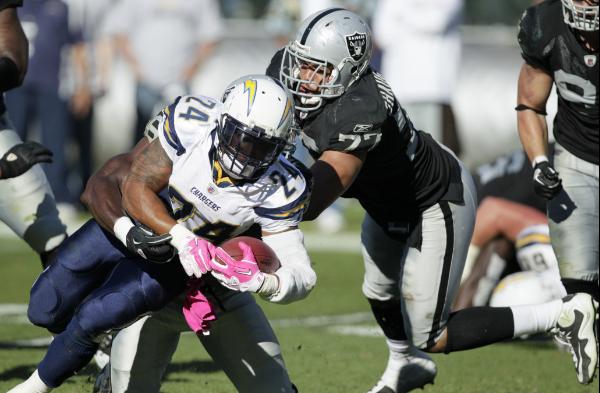 Matt Shaughnessy took his chance at more playing time and did the most with it.

He did not disappoint.

Three tackles, three assists, one sack, and a forced fumble are solid numbers for a defensive end—especially one that is listed second on the depth chart.

Those of you that read my work consistently know that I have been very high on this guy since mid-season last year.

If Shaughnessy keeps playing like he did on Sunday, perhaps the coaching staff will feel the same way I do about him and get him in the game more often. 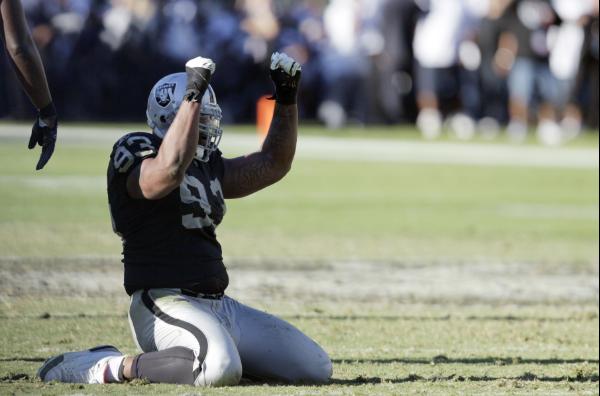 Tommy Kelly and the whole defensive front did a great job on Sunday.

The Chargers had a total of 25 rushing attempts for just 77 yards. (Not including Philip Rivers' one scramble for 14 yards.)

That's an average of only 3.08 yards per carry.

I don't know if it was due to players being moved around to cover for injuries, or the Raiders just got sick of being put down for their lack-luster run defense.

Whatever it is, I'm sure Raider Nation will take it. 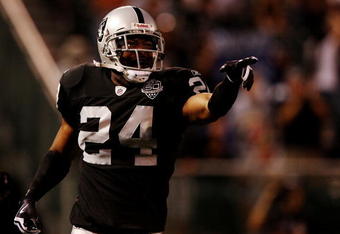 Michael Huff had a great game against the Chargers.

A total of nine tackles and two assisted tackles is a pretty decent day for any defender.

When you add the sack and forced fumble that iced the game, you get a game changing performance from a player that has been much maligned among fans. (Including this writer.)

That one, game winning play should take some of the heat off of Michael Huff—for a week or two at least.

If he can keep this play up, it should alleviate the heat altogether. 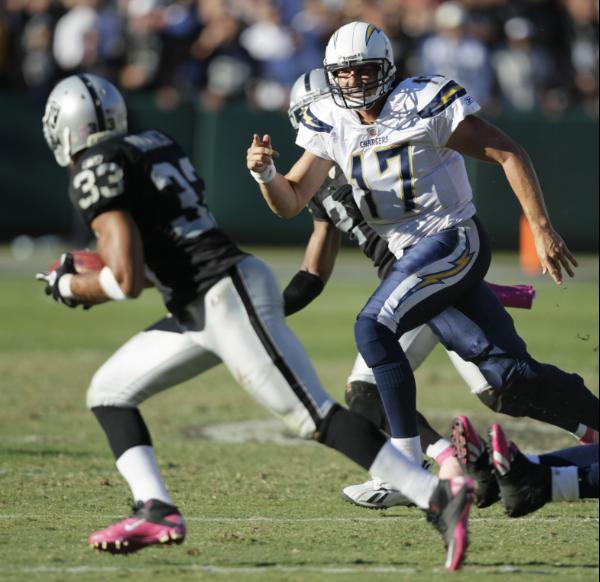 Tyvon Branch was in the right place, at the right time.

I'm not giving Tyvon Branch a pass on his less-than-spectacular coverage skills, I'm only stating that he had a huge day for the Raiders on Sunday.

The fact is, no one has stopped Rivers and the Charger passing attack in more than two seasons. The Raiders secondary was no exception.

The two tackles and one assist by Branch aren't anything to get excited about, but the the 64 yard fumble return to clinch the game is.

That's what can happen when a player is "always around the ball." 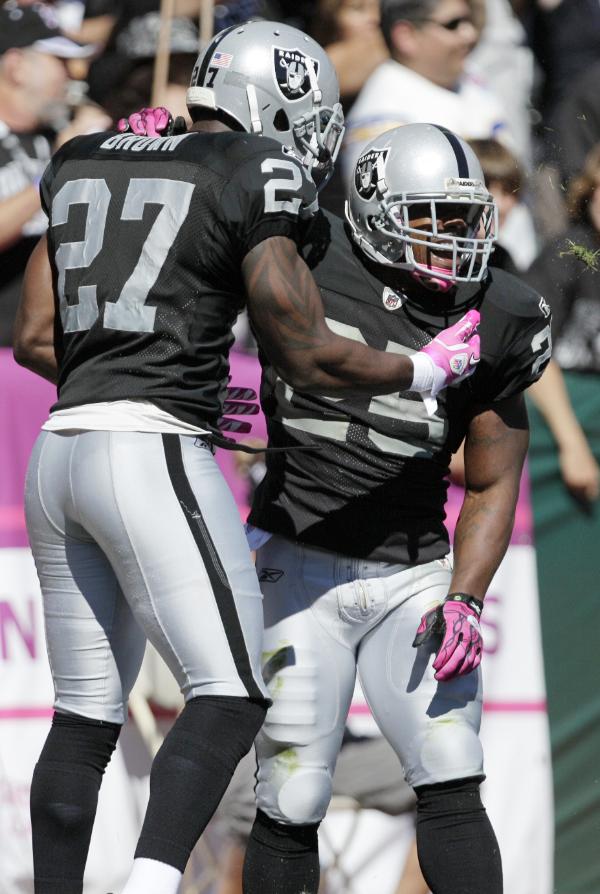 Two blocked punts in one game. How often does that happen?

Brandon Myers and Rock Cartwright each got a blocked punt. One went out of the endzone for a safety, and the other was recovered by Hiram Eugene for a touchdown.

Both were enormous for the Raiders.

Sebastian Janikowski didn't miss anything. Hopefully his problems are cured for good.

Shane Lechler was simply himself. He had four punts and averaged 47.8 yards per punt. Not overly great for Lechler, but better than most punters in the league. He kept the Raiders in positive field position all day.

The coverage teams did a nice job as well. Darren Sproles had only 33 total return yards on four punt returns and two kick returns. This is a drastic improvement for the Raiders' coverage squad.

Nick Miller touched the ball just once all day, but he made that one touch count. Miller took a Scifres punt back 46 yards and completely flipped the field position for the Raider offense.

The special teams in general seem to have turned a corner. Raider Nation will only know if it's permanent if the solid special teams play continues in the coming weeks. 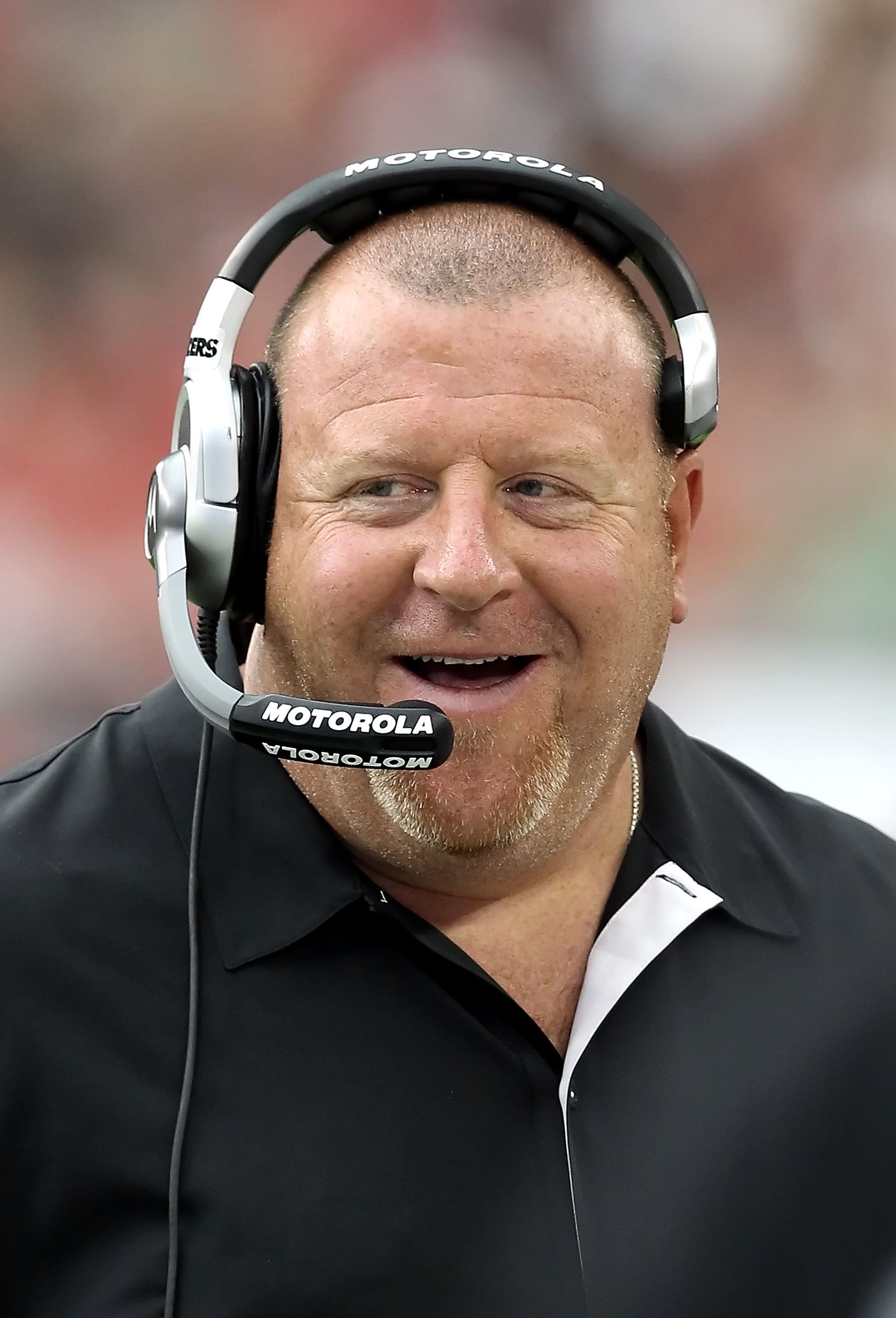 Tom Cable proved to this writer that he has what it takes to win in the NFL.Christian Petersen/Getty Images

Amid all the negative press, criticism, and many in Raider Nation calling for his job, Tom Cable ended six and a half seasons of Raider futility against the Chargers.

The offense was sputtering, Bruce "The Spark" Gradkowski got hurt, the Chargers took the lead, and things looked dismal for the Raiders.

Tom Cable did not allow the team to get down, lose focus, or give up. He kept them motivated, and believing they could win—and they did.

Mike Mitchell spoke to how Cable wouldn't allow the team quit in a post game interview.

Not every coach can do that. Norv Turner, the coach they beat Sunday, couldn't do it for the Raiders, but no one is calling for his job.

Will it be enough to silence Cable's critics? This is Raider Nation, so—probably not.

No coach since Jon Gruden has been able to do this for the Raiders, and Cable deserves some recognition and credit for the victory on Sunday. 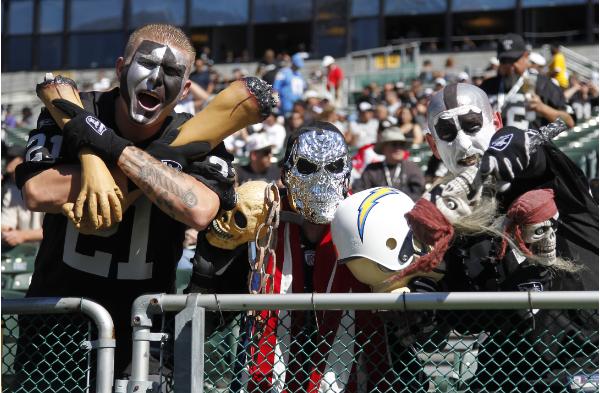 The Black Hole was rowdy as ever on Sunday!

The Raiders' win over the Chargers was a team effort in the truest sense.

The offense scored 19, the special teams accounted for nine, and  the defense chipped in with seven of their own. That's team football at it's finest.

The usually excellent secondary didn't look that great, but honestly, Rivers and the Chargers make a lot of good secondaries look bad.

That said, the run defense, special teams, and offense rose to the occasion and picked up the slack for their teammates.

The difference between winning and losing is whether or not your teammates step up and have your back. On Sunday, the secondary got beat, but the rest of the team stepped up and got it done.

What do you say Raider Nation? Who did I forget? Who doesn't deserve to be in this article? Let me hear you in the comments.