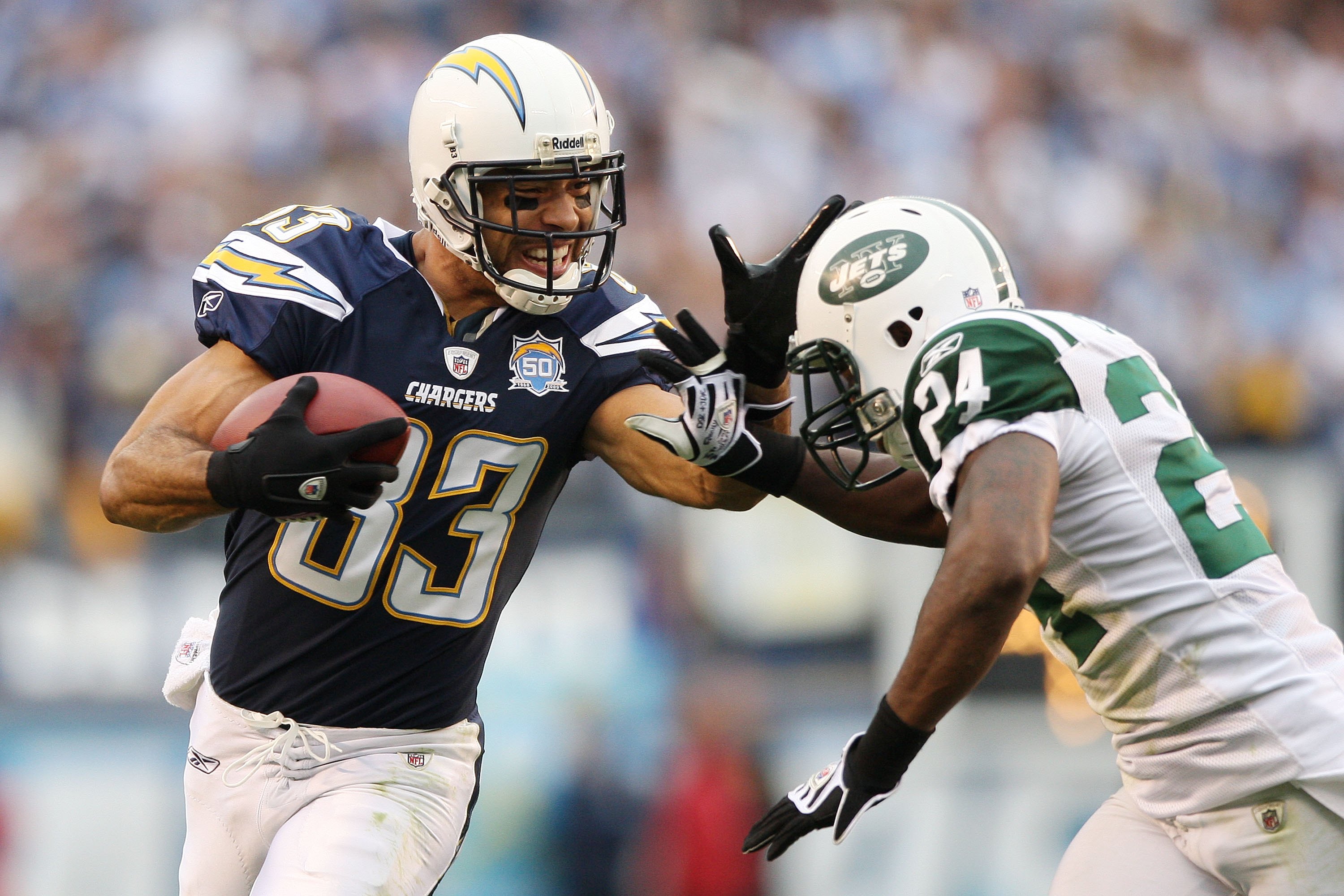 The Patriots may look to the Chargers' Vincent Jackson, or former Patriot Deion Branch, to fill the void at wide receiver left by Randy Moss.Donald Miralle/Getty Images

With Randy Moss officially a member of the Minnesota Vikings, the Patriots will look to replace the Hall of Fame wide receiver in the next coming weeks.

While the Patriots have in-house options in Julian Edleman and Brandon Tate, they both have little experience playing the wide receiver position in the NFL.

Instead of staying within the organization, the Patriots have made preliminary phone calls around the league, including to the San Diego Chargers, discussing possible scenarios for bringing in Vincent Jackson.

According to a report from ESPN.com this morning, Tom Brady has contacted former Patriot Deion Branch about the possibility of him returning to New England and sources from both teams have confirmed that the two sides have been discussing a deal involving the veteran wideout.

Whether the Pats make a deal or not, it would be nearly impossible for the Patriots to find production that would match what Randy Moss could bring to the table at this juncture.

Considering that New England won three Super Bowl titles with the likes of Branch, Troy Brown, and David Patten heading their receiving core, we can afford Brady and Belichick some benefit of the doubt in this case.

With that being said, here are five wide receivers that may step into Moss' shoes in the New England offense. 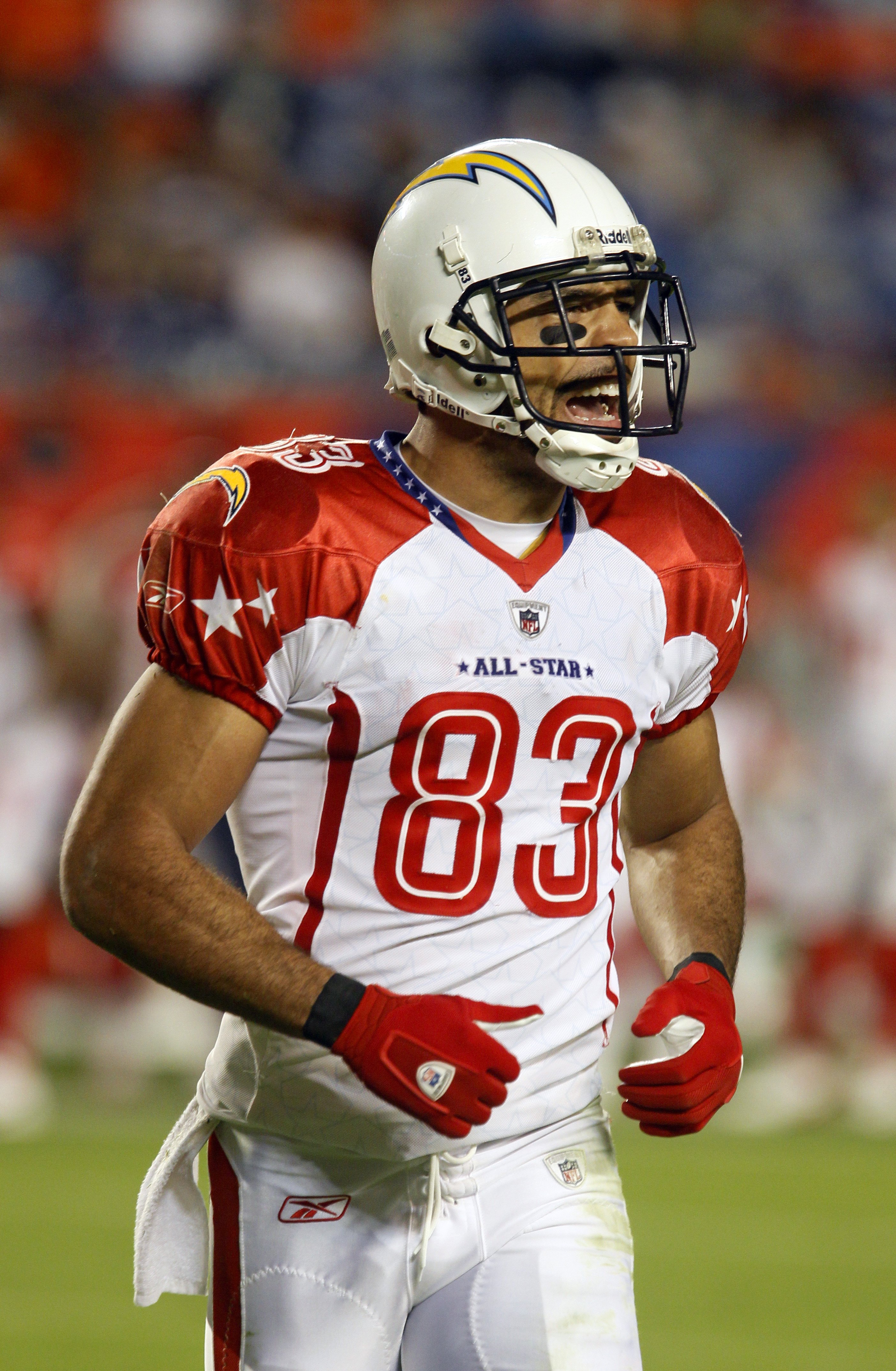 Despite an eight-game suspension, Jackson would be able to become an instant downfield threat in the New England offense.Scott Halleran/Getty Images

As the Patriots continue to look into the possibility of bringing in a new face at wide receiver, Vincent Jackson's name continues to pop up around the league.

In 2009, Jackson developed into one of the NFL's premier receivers, making his mark in the vertical passing game with the San Diego Chargers. After catching 68 balls for 1,167 yards last season, V-Jax, along with left tackle Marcus McNeill, gave away the beginning of his 2010 season, because of a contract dispute with the Chargers.

While they would only be getting Jackson for ten games if they did end up acquiring him, Tom Brady and the Patriot offense would be be getting a 27-year-old version of Randy Moss Light.

Standing just over 6'5", Jackson has the ability to jump and catch balls over smaller defensive backs aroudn the league. Despite his imposing figure, the 6-year man out of Northern Colorado consistently beats defenses down the field with his deceptive speed, aided by his long strides.

With San Diego allegedly looking for a first and second-round pick in any trade that keeps Jackson in the AFC, the Patriots have the draft picks to make a deal happen.

The question is are they willing to part with them to deal with a headache like Jackson, because wasn't that the same reason why they dropped Randy? 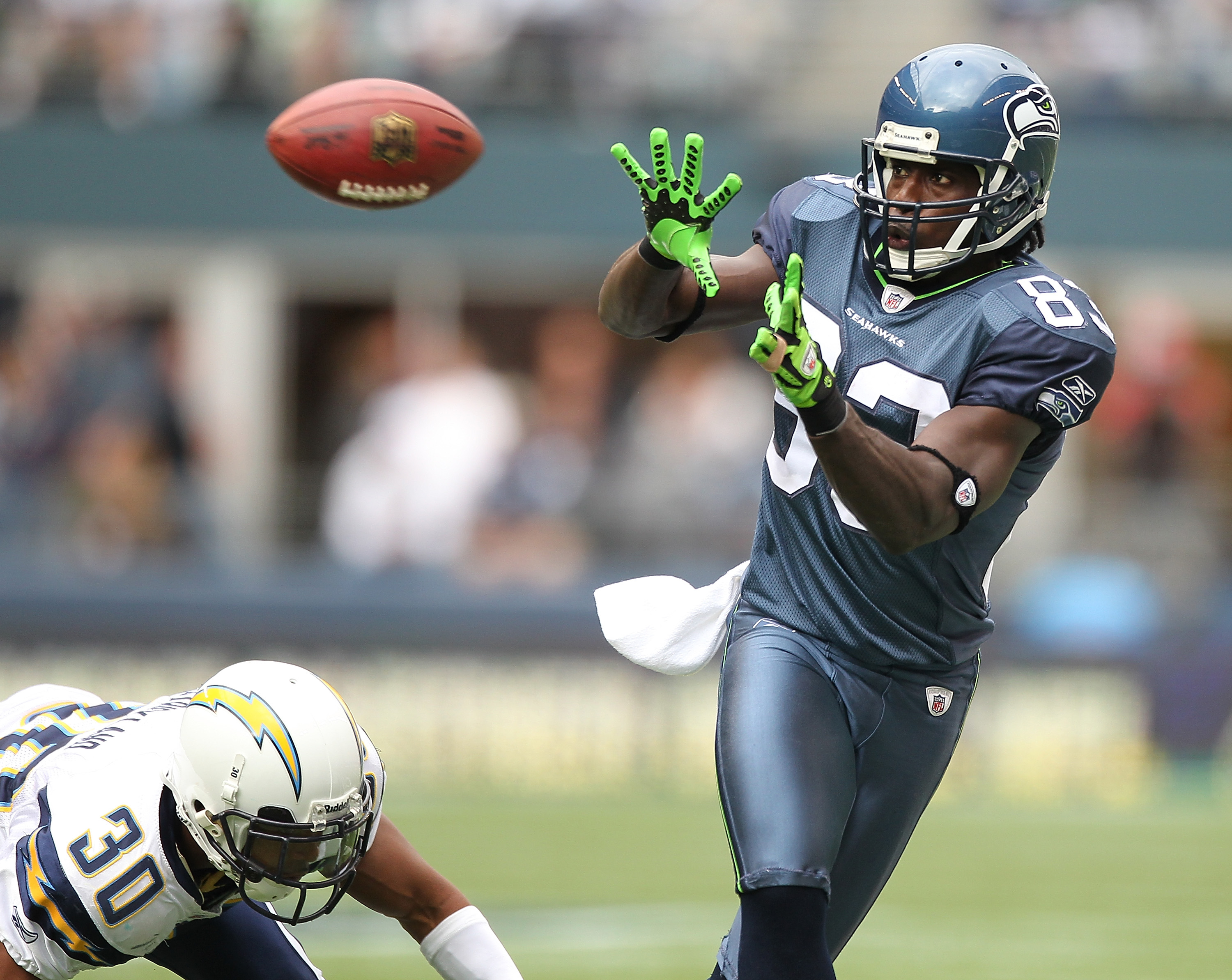 After being traded to Seattle for a first-round pick in 2005, New England may look to Branch as a viable replacement to Randy Moss.Otto Greule Jr/Getty Images

The MVP of Super Bowl XXXIX may finally have his long-awaited homecoming in front of the New England faithful.

Traded in the offseason following the Pats' most Super Bowl victory in '05, Branch never received a proper send-off, nor did he even get to see Gillette Stadium, after receiving the highest-honor in the Super Bowl.

Despite his diminutive size, Branch could help the Patriots develop a mid-range passing game, as he specializes in getting open in the middle of the field. Blessed with great initial burst, the nine-year veteran works best out of the slot, creating mismatches all over the field because of his quickness and prowess in the open field.

Branch could probably had for a late-round pick, probably a fifth or sixth-rounder, as the Seahawks seem intent on dealing him at soe point this season.

Even though he has been bested by injuries since coming to Seattle, Branch is finally healthy and may get another opportunity to compete for a Super Bowl with the New England Patriots this season. 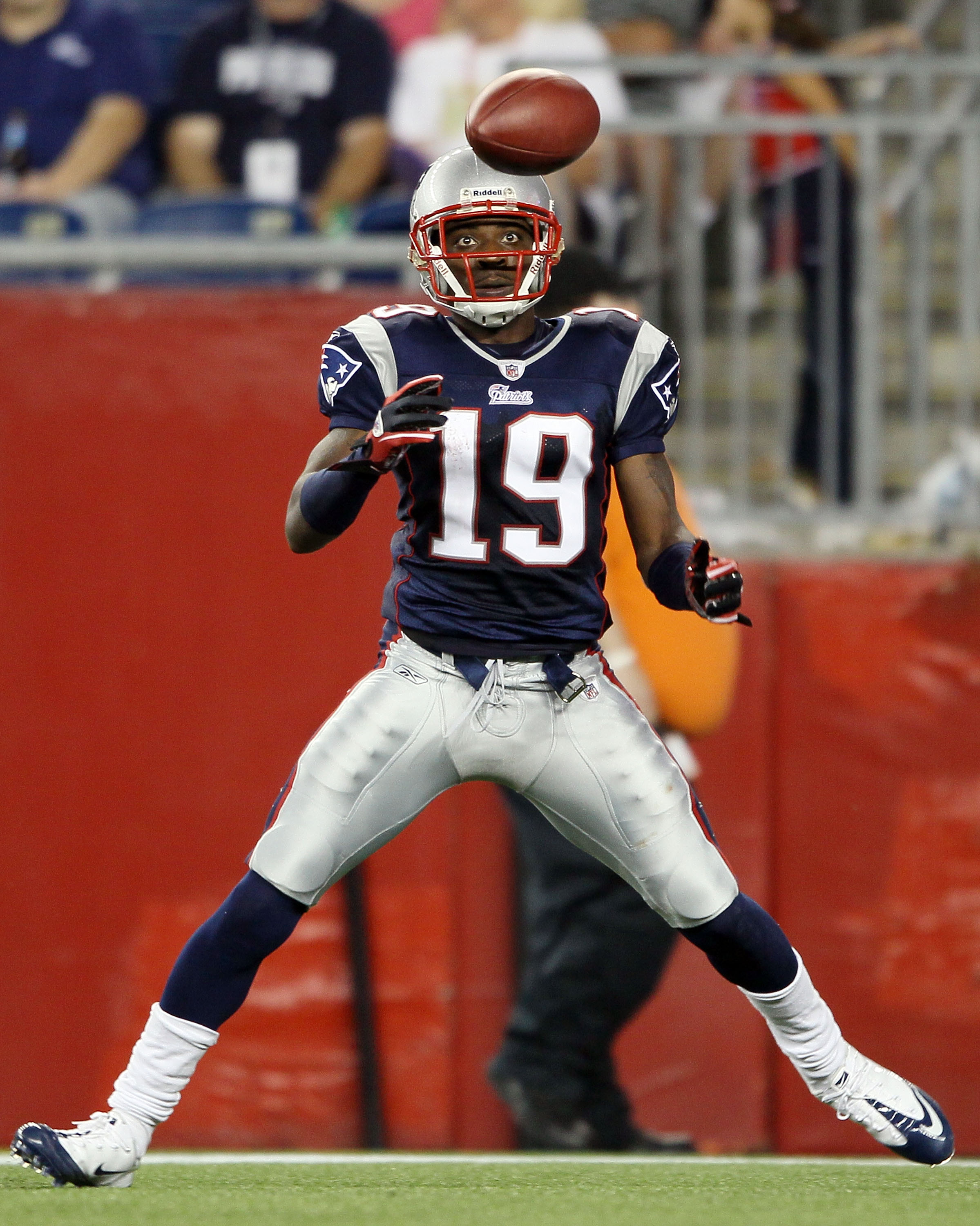 With 11 catches to his name, Brandon Tate will hope the explosiveness he has displayed on kick return will translate to the wide receiver position.Elsa/Getty Images

In his second year out of North Carlina, Brandon Tate will be looked upon, at least in the short-term, to replace Randy Moss in the Patriots' offense.

Standing at 6'1", Tate has the explosiveness needed to become a downfield threat at the receiver spot, as evidenced by his two kick return touchdowns already this year. With 11 catches and 135 yards on the year, the young wideout has had limited experience so far and he will be thrust into a starting role as the Pats take on the Baltimore Ravens this week.

If Tate can translate his skills in the return game to his offensive repertoire, Tom Brady may not miss Moss' presence in the vertical passing game as much as we thought. 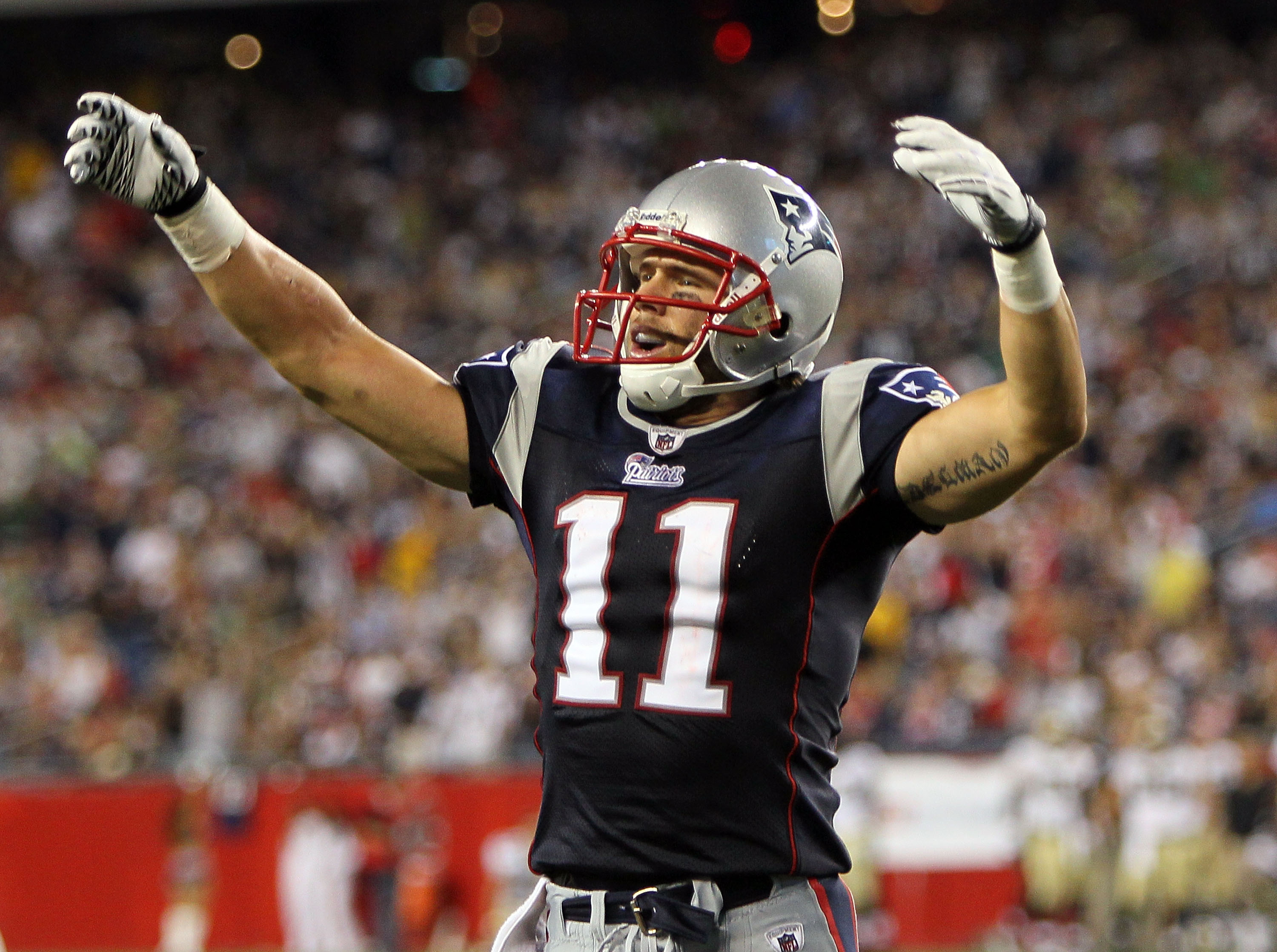 Seen as a porr man's Wes Welker, Edelman will need to take on a bigger role in the Patriots' offense with Moss gone.Jim Rogash/Getty Images

One year after replacing Wes Welker in the New England offense, Edelman is now faced with the challenge following an NFL legend at the other receiver position.

Without great downfield speed, the second-year man from Kent State uses his strong hands and focus to catch passes in traffic and in the middle of the field. After a slow start to the year  (he only has four receptions in three games), Edelman will need to play a bigger role at the receiver spot in the New England offense.

Teamed with Welker, the duo will look to punish defenses in the underneath zones, hopefully opening up the big play down the field for... 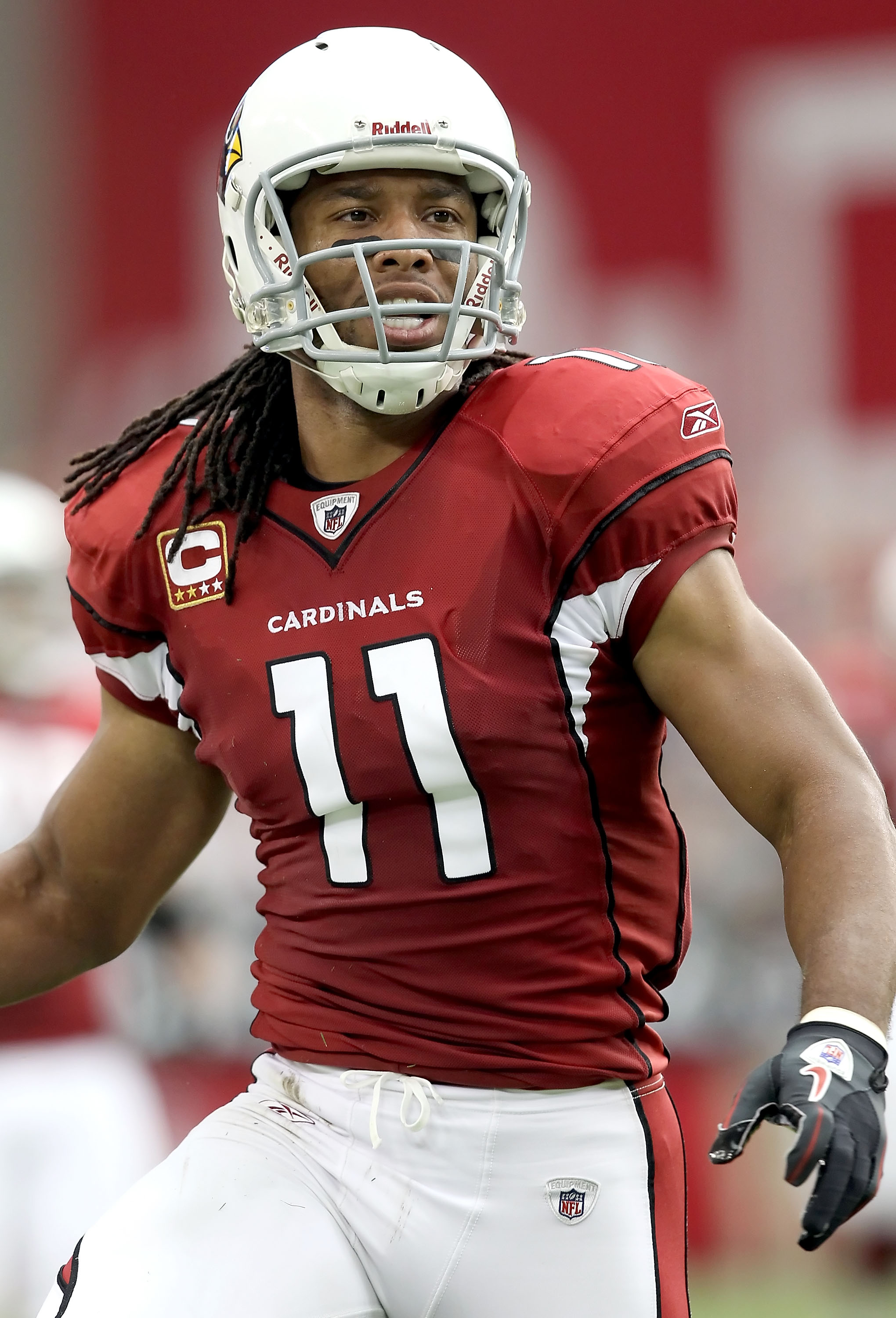 Stuck in a floundering offense, Fitzgerald may look at other possible destinations to play competitive football around the league.Christian Petersen/Getty Images

In the third year of a four-year, $40 million deal, the Arizona wide receiver has been plagued by inconsistent quarterback play through the first four weeks of this season.

Always a stand-up guy witht he media, it's hard to see a player with Fitzgerald's attitude demanding a trade. The problem is, no matter how nice he wants to be, the Cardinals are not going to be good anytime soon.

Despite putting up 19 catches for 208 yards, Fitzgerald has not been able to have a patented breakout performance yet, and who knows if it will this season with rookie Max Hall throwing him the ball over the next 12 games.

With the Cards caught in a rebuilding year(s), the draft pick-laden Patriots could at least make the phone call to HC Ken Whisenhunt regarding the status of Fitzgerald.

While the Pittsburgh alum wallows in double coverage, he could be catching passes in single coverage, from Tom Brady,, freed up by the underrneath abuse that Wes Welker puts opposing defnses through.