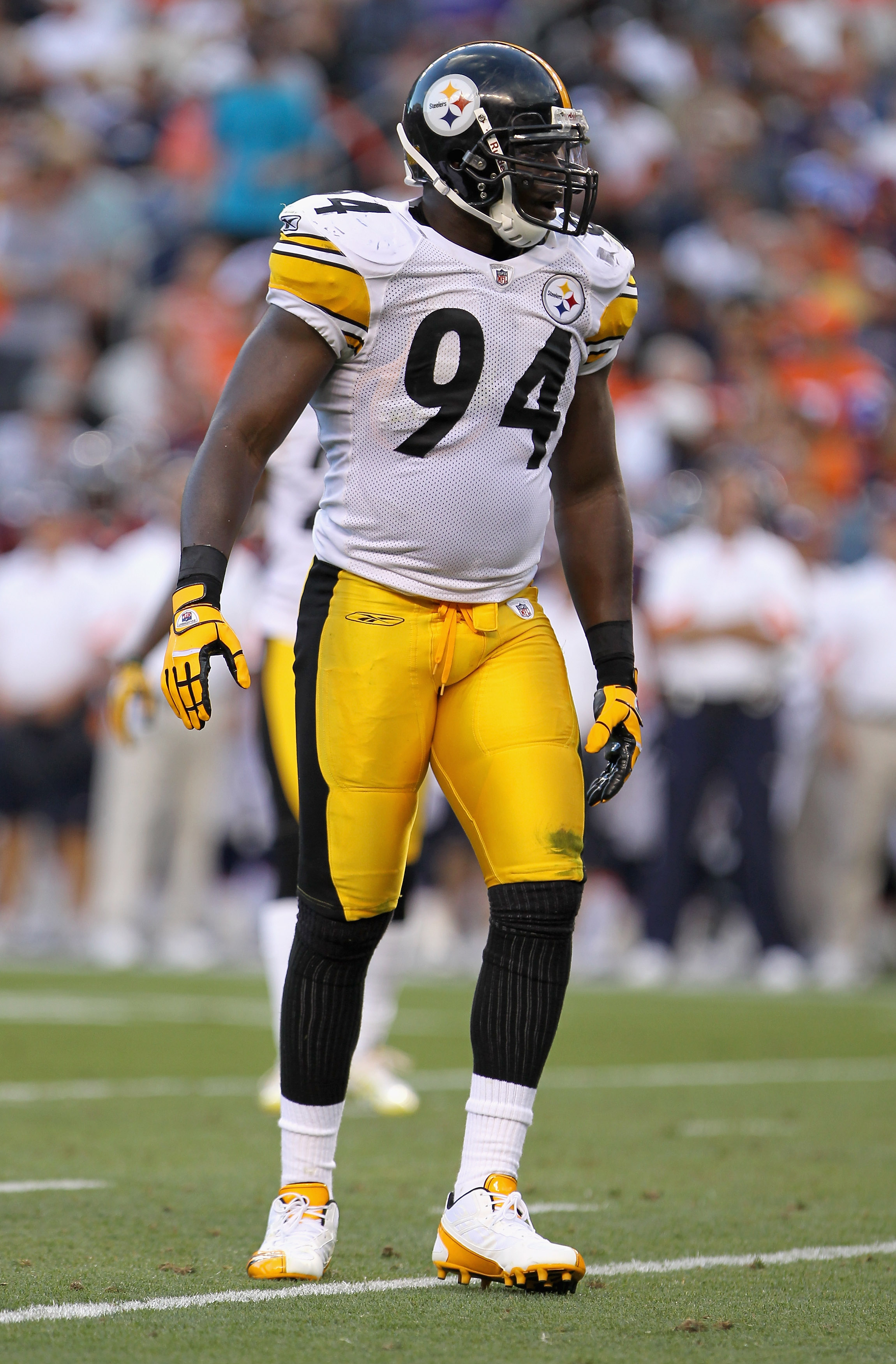 The Pittsburgh Steelers have produced great line backer after great line backer. I was reading an article I found on the front page of the Steeler section here on Bleacher Report, naming the top five LB's in the history of the franchise.

Needless to say, I believe the writer was more than a little off of his selections. (You can read them right here.)

That writer had only named five, but I find it very hard to limit the list to only five with the possibility that are out there.

There are SO many great players that have played the LB position for the Steelers, that limiting the list to 10, almost seems unfair.

These are the great players that ALMOST made the list, but not quite.

Andy Russell, (as much slack I am going to take for this, it is how I feel) Russell was one of the few players that was on the Steelers PRIOR to the hiring of Chuck Noll. His performance did not become elite until the Steel Curtain was formed around him.

I know that may not be fair, but it is why he is not on this list.

James Harrison. Defensive MVP, scored the longest play in the history of the Super Bowl. It was hard to not add him, but he took so long to develop into the player that he is, people forget the years he was on the bench.

Chad Brown. Personal feeling about Chad Brown is possibly what kept me from adding him to the list. The way he left the Steelers to join the Seahawks, made me so mad, I actually enjoyed watching him not be successful there. He did redeme himself in a way, by coming back home, but it is what it is. 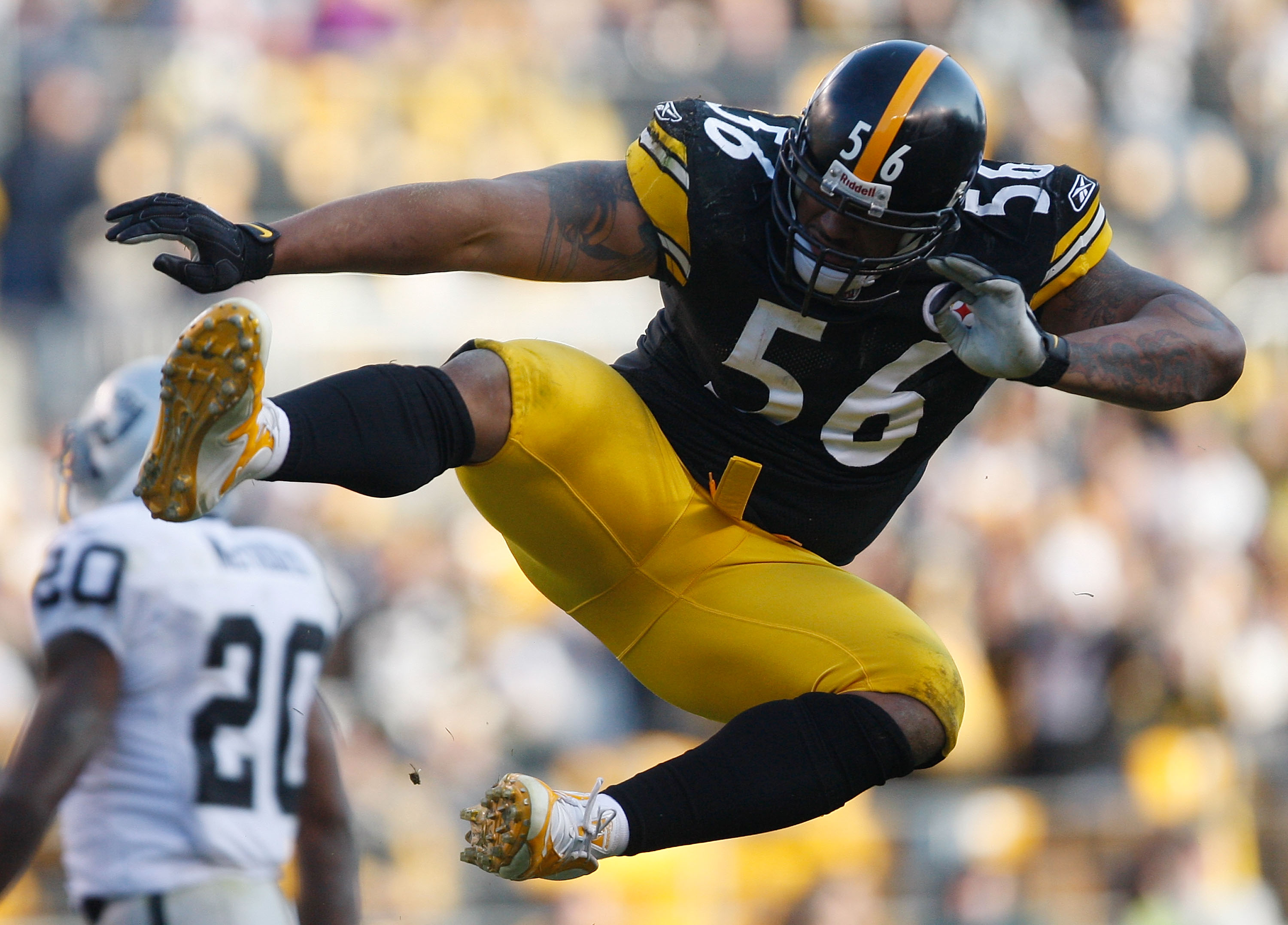 Some people may say that I am crazy for having a player as young as LaMarr Woodley on this list, but Woodley, in his young career has already set records for the Steelers, that none of the people higher on this list have come close to accomplishing.

Woodley has recorded at least two sacks in every post season game he has played in. He has teamed with James Harrison to hold the record for most sacks in a season for the Steelers by team mates (which is a great accomplishment when you think of the LB's that have played on the Steelers).

He is a force on the defense, and has to be accounted for on every play.

Starting OLB for the Steelers.  Currently playing in the final year of his rookie contract.  Should be the Steelers top off season priority to be resigned after this season.

Though Kirkland did not have the most amazing numbers for the Steelers, his ability to cover Backs out of the back field was nothing less than amazing.

Kirkland now coordinates minority recruitment in admissions for Clemson University. He was inducted into the South Carolina Athletic Hall of Fame in 2008. Kirkland also educates student-athletes across the country on the college recruiting process as an Educational Speaker for the National Collegiate Scouting Association. 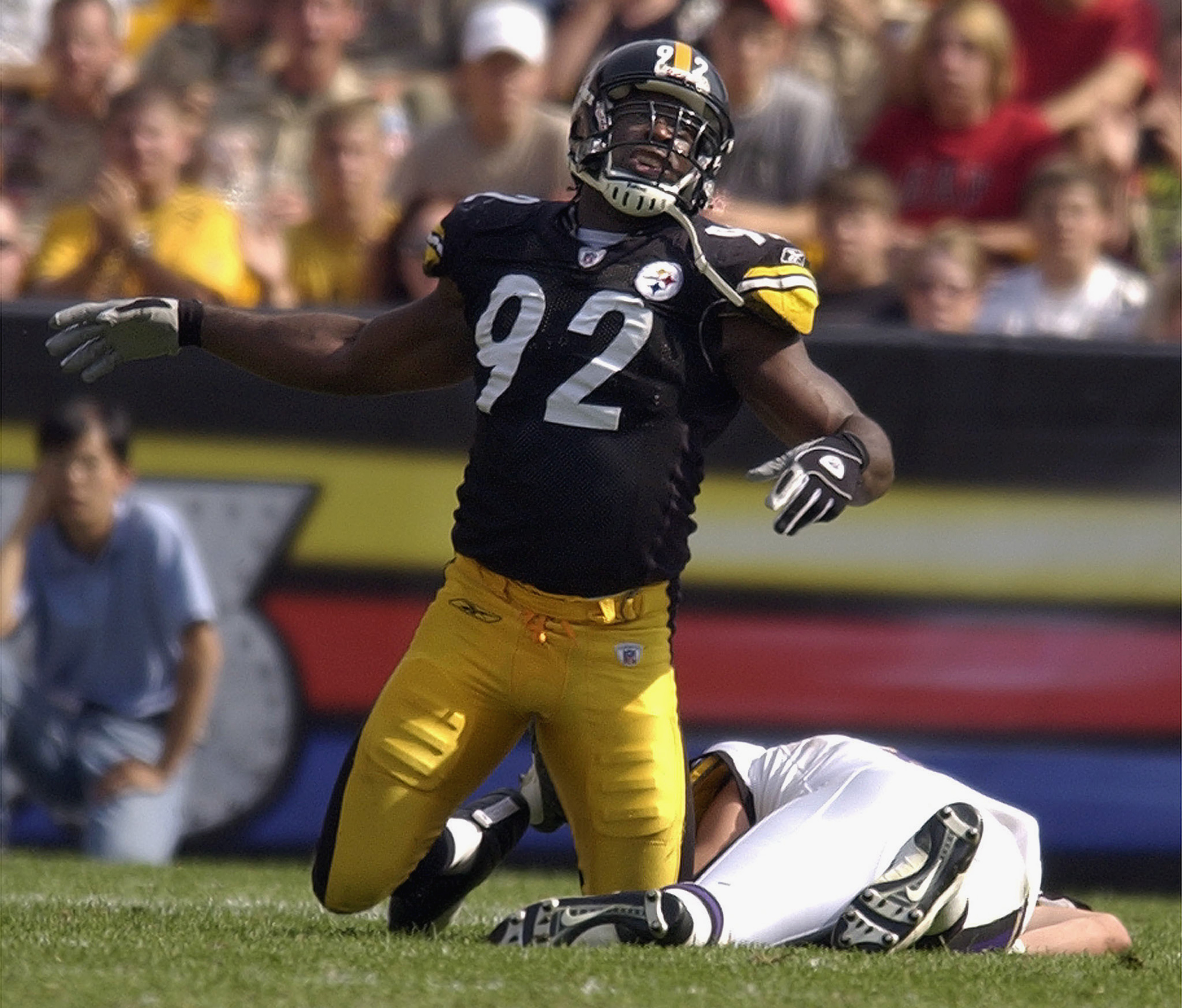 Jason Gildon (who is 3 days younger then me), joined the Steelers in the third round of the 1994 NFL Draft. At one point, Gildon was the All time leader in Sacks for the Steelers.

He was not the type of player that made a lot of noise off the field, but when he was on it, was one of the best in the history of the Steelers.

No information could be found about what Jason Gildon is currently doing. 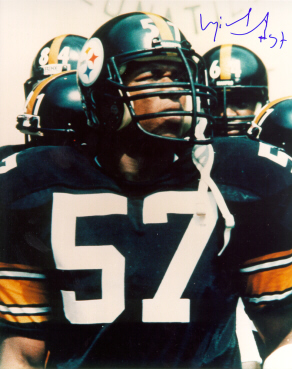 Mike Merriweather was a member of the Steelers during their "Dark Ages" of the 80's. He was the best player on a team that was not, by Steelers standards, a great team.

He was a member of the All Decade team of the 1980's, and did the best he could when the Steelers were not the best that they were.

Merriweather is a financial planner and insurance broker for New York Life, Afflac, and Hartford Mass-Mutual. 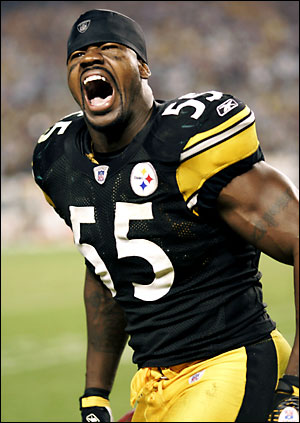 Joey Porter was known for his actions on and off the field. He loves to talk trash, and always backs it up. He wears his emotions on his sleeve, and lays it all on the line when ever he plays.

Porter was released when Mike Tomlin took over the Steelers, probably because of his loyalty towards Bill Cowher, and the coaching staff from Super Bowl XL.

Joey Porter joined the Miami Dolphins after being released from the Steelers. This past off season, Porter reunited with Coach Whizenhut and Russ Grimm with the Arizona Cardinals. 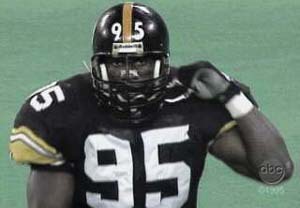 The last Steelers jersey that I owned was Greg Lloyds, #95. He will always be one of my favorites, because he had the same attitude and demeanor that Jack Lambert had.  I am going to hit you, I am going to hurt you, and there is NOTHING you can do about it.

Though Lloyd does not have the greatest numbers in the history of the Steelers, there are no numbers for fear and intimidation. If there were, Lloyd would already be in the Hall of Fame.

1994 AFC Defensive Player of the Year

Greg Lloyd is an assistant coach with the Tampa Bay Buccaneers. 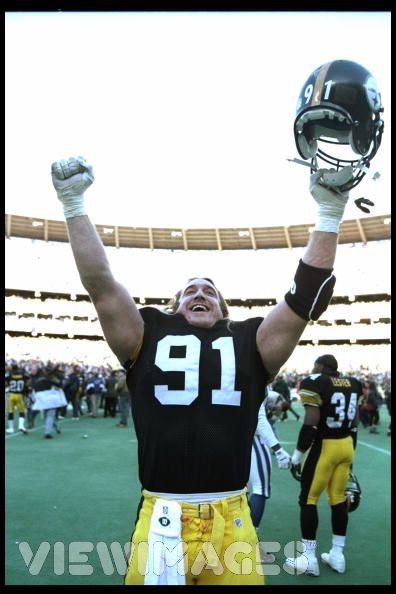 Kevin Greene was one of the first free agent signing for the Pittsburgh Steelers, after Free Agency began in 1993, from the St. Louis Rams.

Green was known as a sack master, and teamed with Greg Lloyd, were a fierce duo for the Steelers in the early 1990's.

Greene was a character, and even joined the ranks of Pro Wrestling after his career ended.

1996 Defensive Player of the Year

Kevin Greene is a Line Backers coach with the Green Bay Packers, helping them convert from the 4-3 to the 3-4 defense. 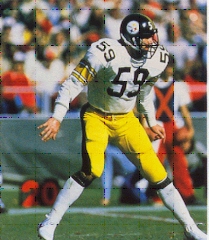 Jack Ham was an un-heralded member of the Steel Curtain. He was more like a silent assassin than someone that did a lot of trash talking.

Though Ham gets a lot less credit than teammate Jack Lambert, Ham had quite a bit to do with the success of the 70's Steelers.

Ham lives with his wife in Sewickley Heights, Pennsylvania. 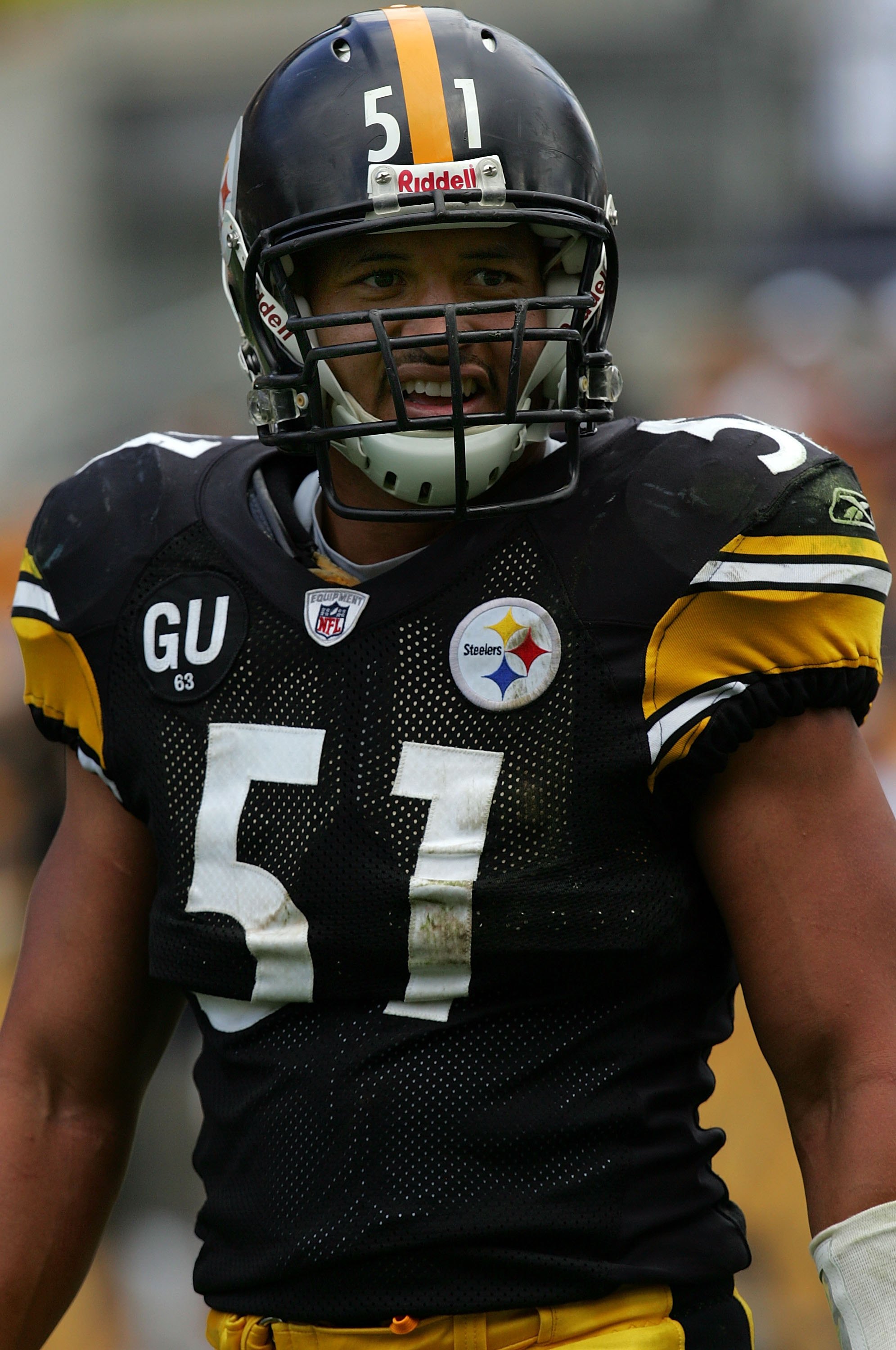 As a first round pick of the New York Jets in 1997, James Farrior never became the first round talent that the Jets had hoped for, allowing him to leave when his rookie contract expired.

Farrior DID live up to the first round selection after he signed with the Steelers in 2002, and has become one of the latest in the long line of Steelers Super Stars at the position.

Farrior has led the Steelers in tackles in almost every season since joining the team, and has been the leader of the defense that has not been ranked outside of the top 10 since he joined the team.

Farrior is still that team Captain of the Steelers. 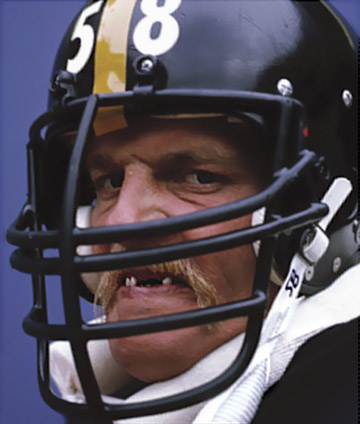 Could ANYONE else be at the top of this list? I am just honored that I was able to actually watch Jack Lambert play during my life time. If you ask my 21 year old son, who the best LB ever for the Steelers was, he will say Jack Lambert. And he never got to see him play.

Lambert was a one of a kind. His mean, nasty streak was the attitude of the Steel Curtain of the 70's. He took NOTHING from NO ONE, and enjoyed punishing opposing players.

I, for one, am glad that Lambert does not play in the NFL today, because the game is just too "Sissy" for a player like Lambert.

1974 Defensive Rookie of the Year

1976 Defensive Player of the Year

Jack Lambert is married with four children, living about 40 miles north of the old Three Rivers Stadium.  Lambert is a youth coach, and a Park Ranger.

Those In the Future. 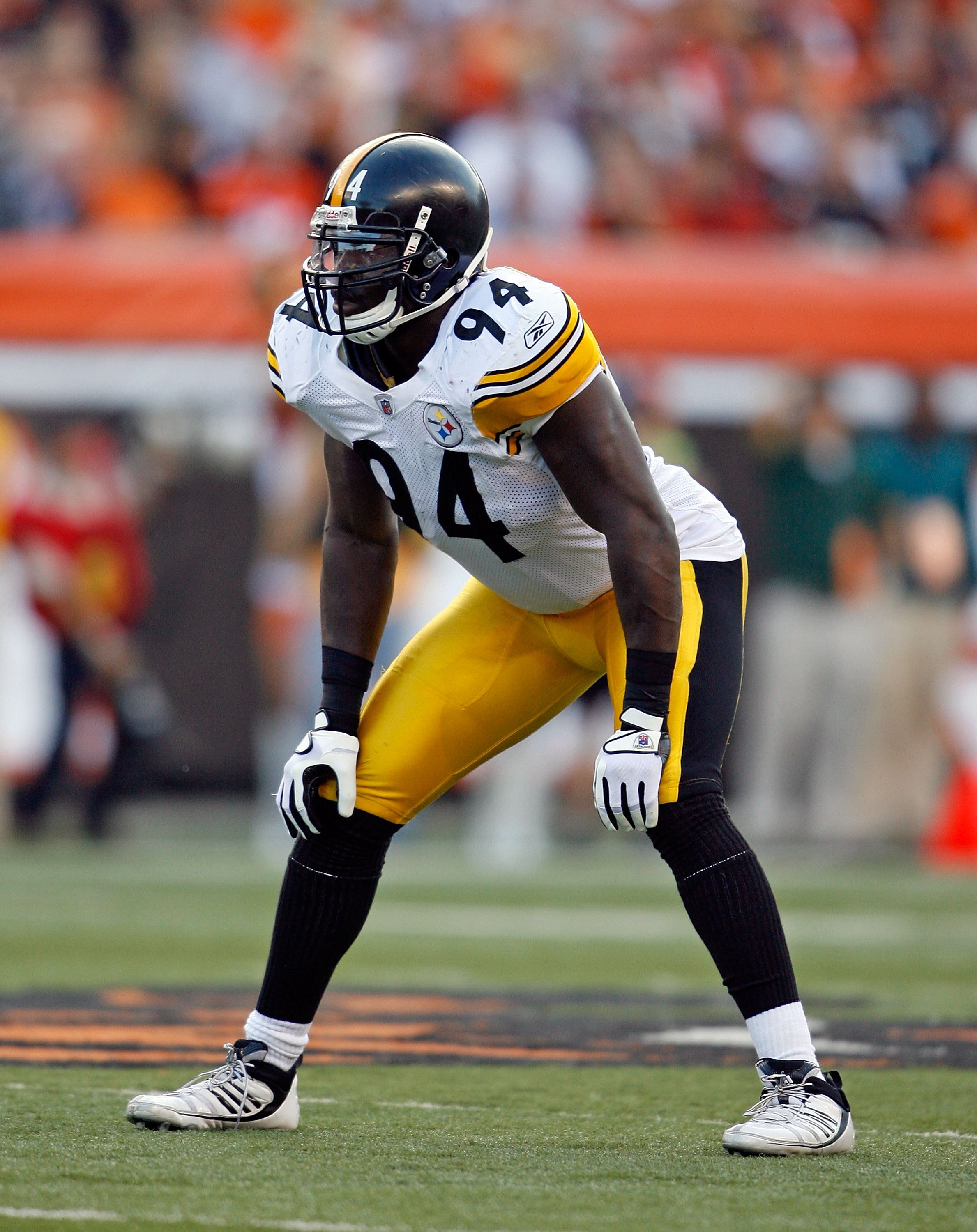 Currently on the Steelers, there are a few candidates that COULD on day push people off this list. I feel like I owe it to the current Steelers to say those players that I believe one day COULD make this list.

Lawrence Timmons. Timmons joined the Steelers one round prior to Woodley. As an OLB, Woodley made an impact earlier, while Timmons had to adjust to a new position, ILB. Timmons has finally turned the corner, and is becoming the leader of the Steelers.

Timmons is still very young, and has many great years of football (baring injury) left in him. He could push his way HIGH up this list.

Stevenson Sylvester. Though he has only played Special Teams, he has shown an eye for the ball. Sylvester has a LONG way to go before even being able to be thought about a list like this, but I see a lot of a Joey Porter/Greg Lloyd in him, and I think he can become elite. 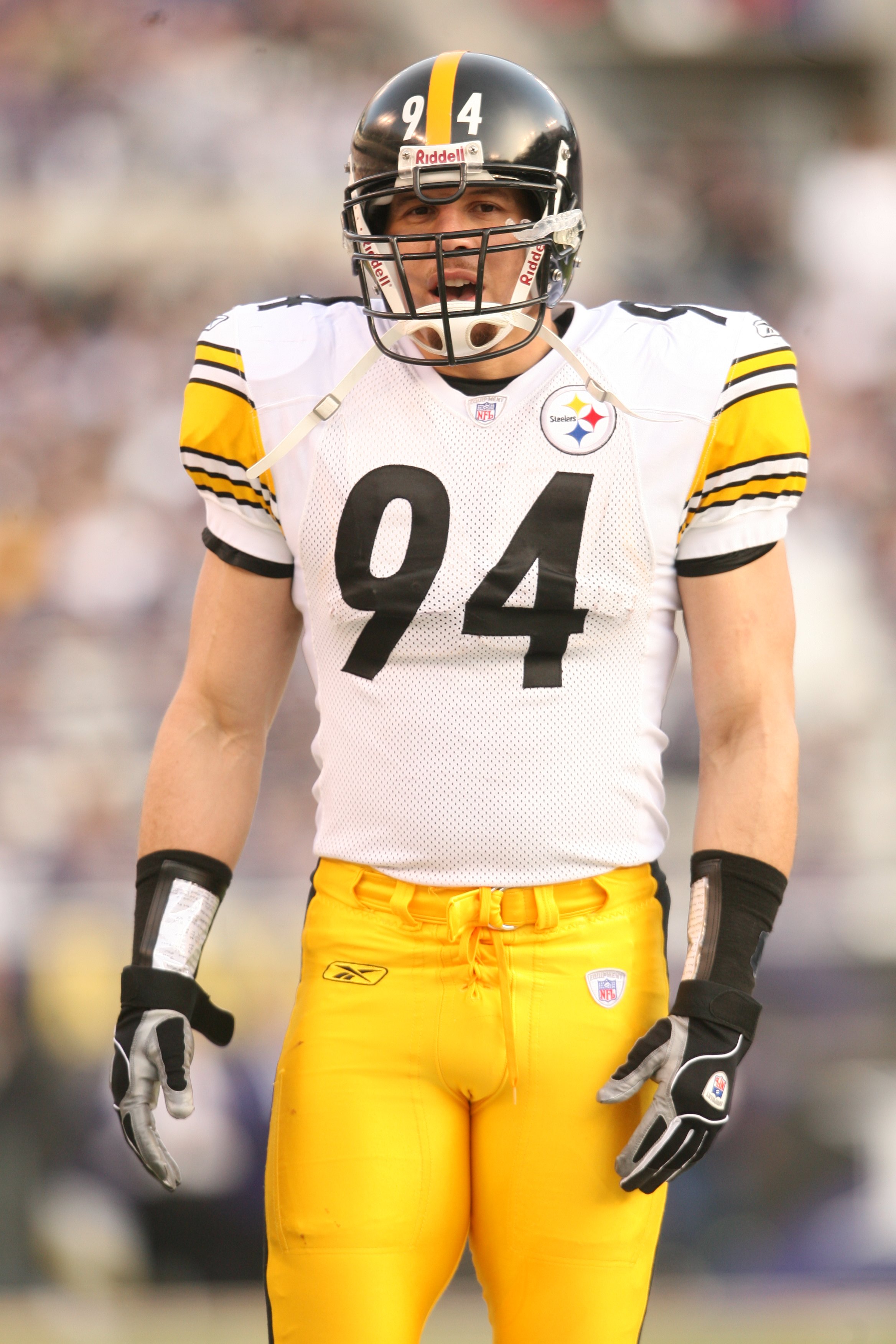 I know that a lot of people will disagree with me, and really that is OK.  Most teams would not even be able to make a list of 10, while Steelers fans can make a list of 50.

That being said, please feel free to disagree with me, and leave your opinions in a comment below (or, write your own article if you would like!  Just link it here, so everyone else can check it out.)

Thanks for taking the time to read mine.