Bobby Cox: 5 Things Atlanta Braves Fans Will Miss Most About Their HOF Manager 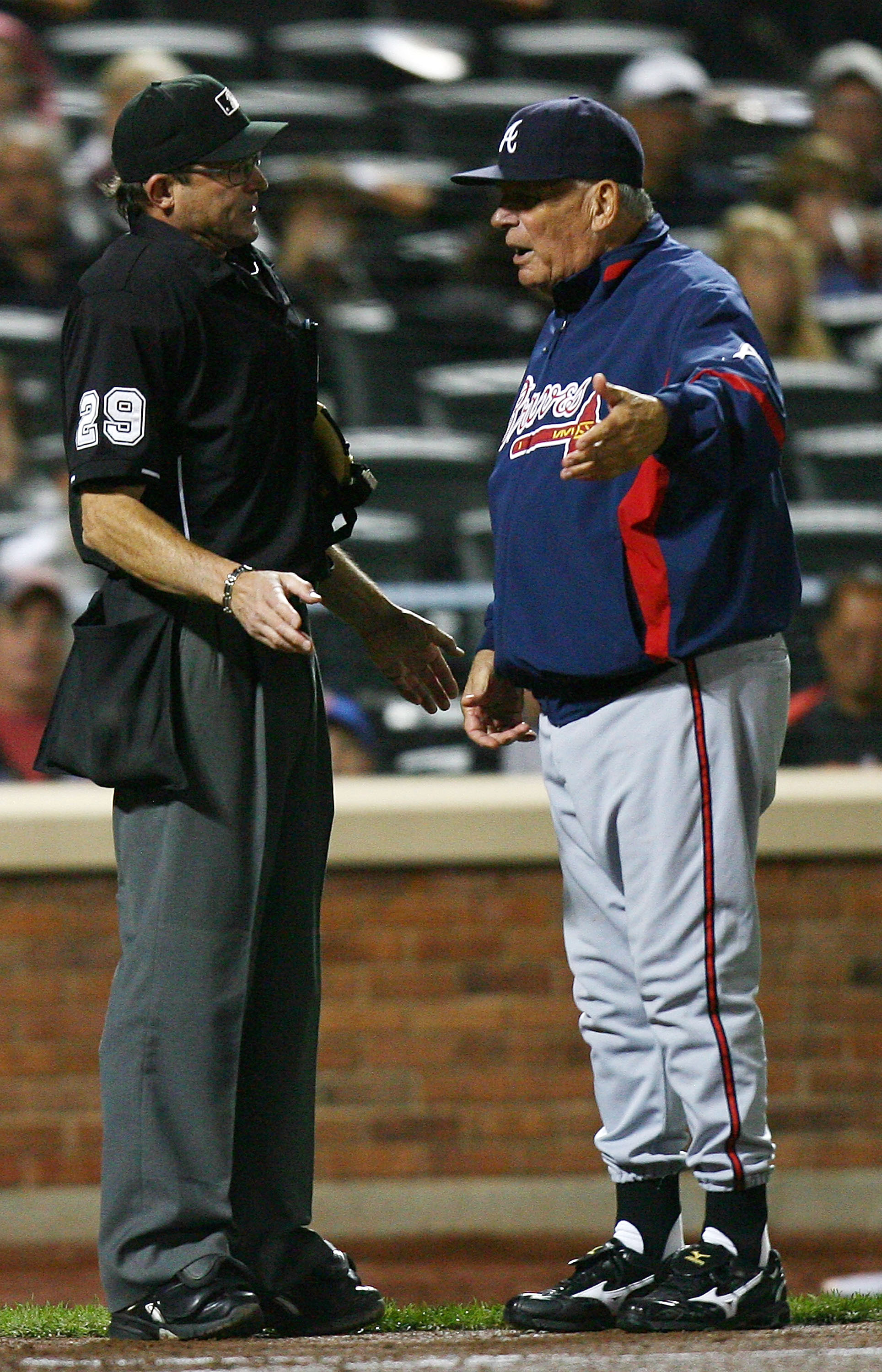 With only four games remaining in the 2010 campaign, venerable manager Bobby Cox is making his last push for the postseason.

We all know that...and knew (or hoped) that this would be the case from the first side-sessions down at the Disney Wild World of Sports Complex in Orlando.

But, the fact that Cox is in his final stretch brandishing a cap with a fancy "A" is starting to feel "real," if you will.

After all, if the Braves manage to lose grasp of their current Wild Card advantage in the season's final series, No. 6 is gone for good.

Regardless of how you will be soaking in that looming reality (hopefully that "gone for good" stuff hits us, as Braves fans, some time after Game "something" in the World Series as Cox is hoisted onto his team's shoulders in victory), be it with jubilation, anguish, or something in between, there are some things that we are all going to miss about the man who led the Atlanta Braves through their greatest run in franchise history (Boston and Milwaukee included). 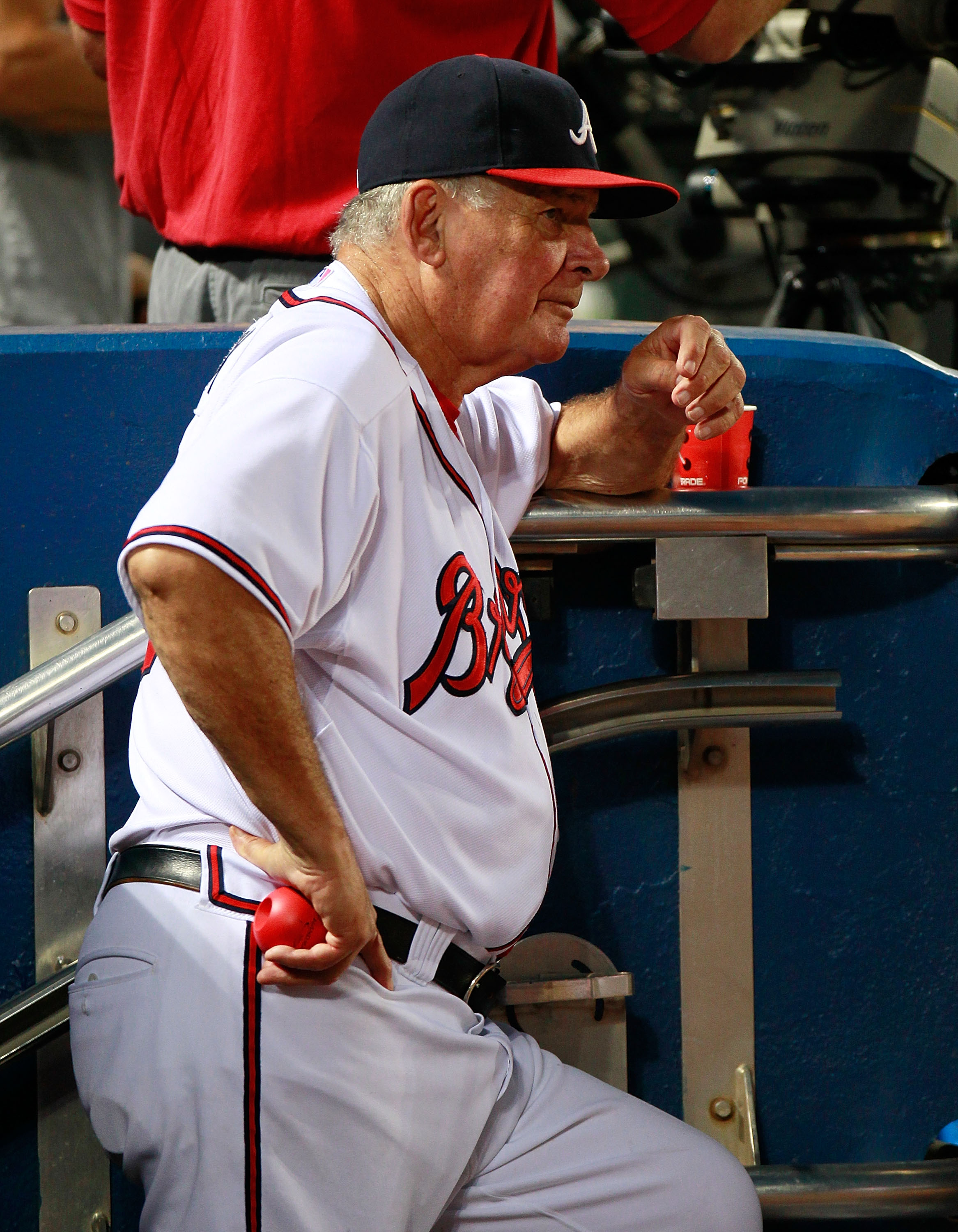 If you have had the pleasure (or displeasure, if Chip Caray has been on-air) of listening to broadcasts from any one of SportSouth, FS South, or Peachtree TV over the past couple of years, you know what I'm talking about here.

With a little mic set up by the 2500-win manager's perch on the left side (from behind) of the Braves' dugout, Braves fans have been graced with rah-rah reminiscent of little league games.

Well...the last one there has only happened about twice...but the tone and energy that oozes out of the veteran skipper is unrivaled by any other manager in the game.

And the dead air will always remind us of the world's most famous grumpy old man (Jack Nicholson notwithstanding).

No. 4 Seeing The Same Relievers Every Night 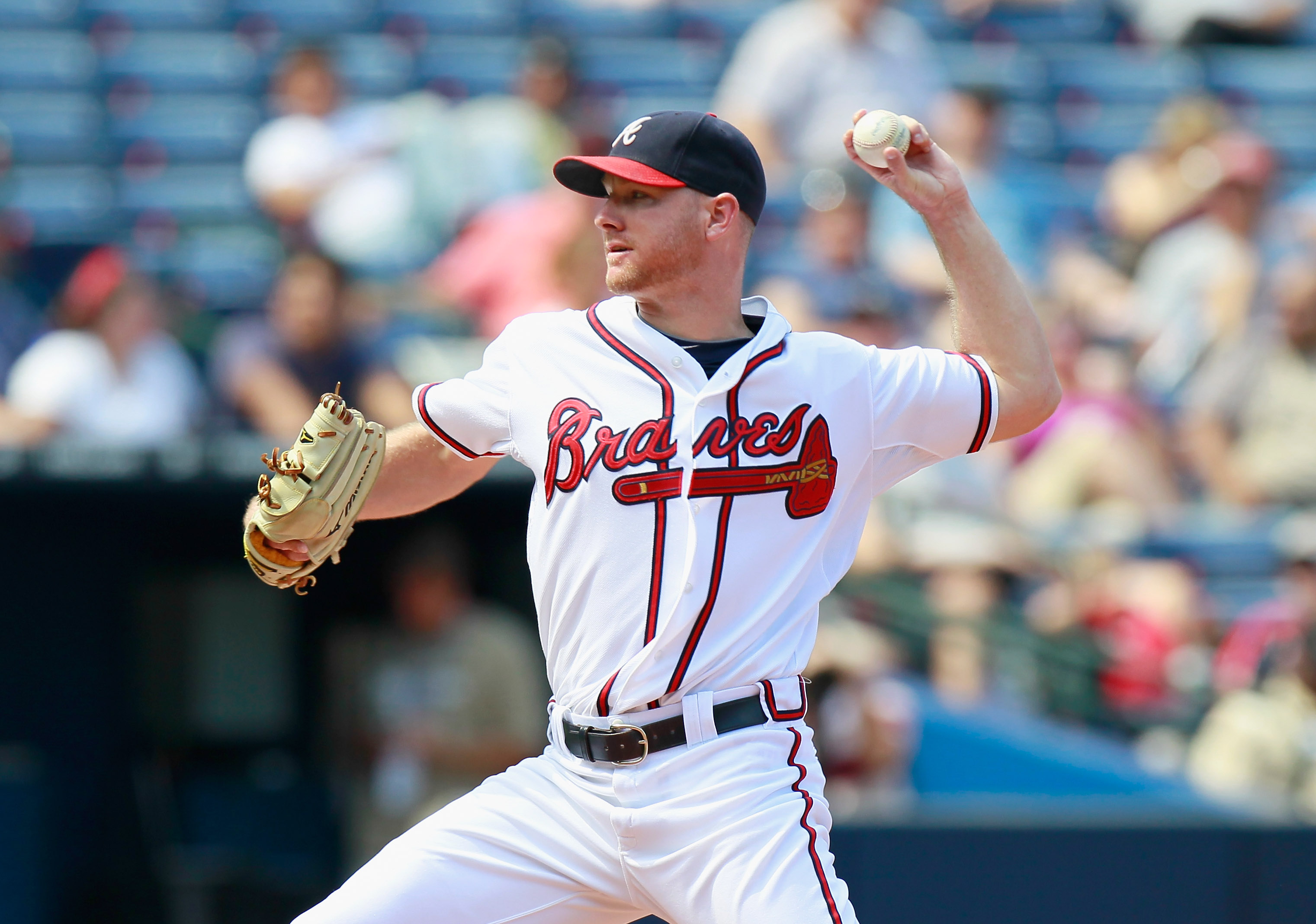 But we all know about Cox's tendency to pick three to four guys out in the 'pen and ride them until their arms fall off.

In years past, we've seen Mike Gonzalez, Mike Remlinger, Kerry Ligtenburg, Rafael Soriano, and others ridden like pack mules over the course of a season.

Granted, all of these guys have been effective (so this isn't a jab, or anything)--but this is something Cox's successor (*cough* Fredi Gonzalez *cough*) will not be able to execute so perfectly (or head-"scratchingly"). 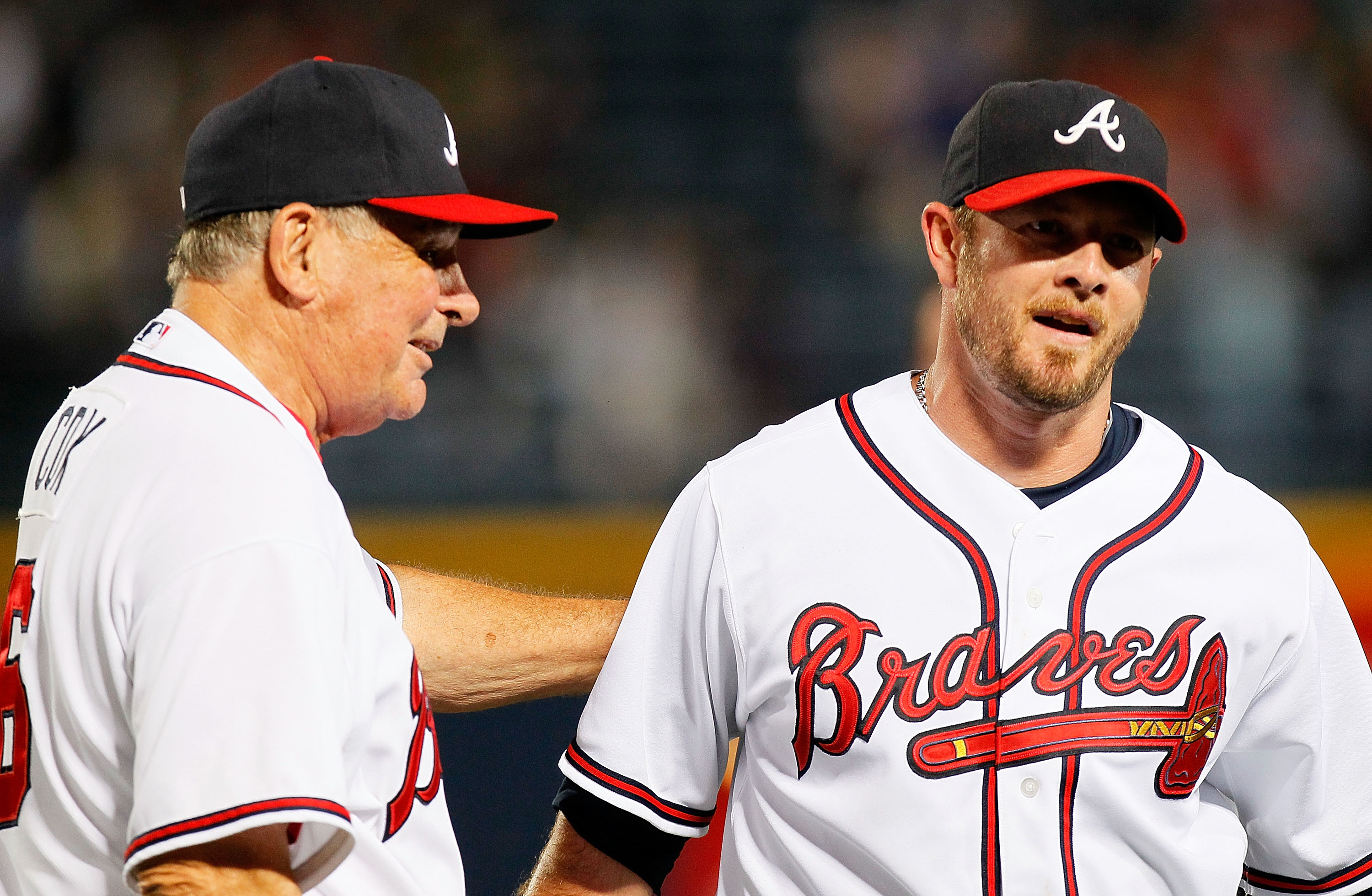 When the Braves made their mad dash at free agency this offseason and at the trading deadline back in July, there was one line heard over and over again from the dudes they signed: "I'm thrilled to play for Bobby Cox in his final season."

Billy Wagner, Takashi Saito, Derrek Lee, Troy Glaus, Eric Hinske, Kyle Farnsworth, Rick Ankiel, Alex Gonzalez...name someone the Braves acquired sometime in the last 13-14 months and, in one way or another, they said that.

The universal respect felt for the Braves' beer-gutted manager is astonishing...and when the Braves go a-courting this offseason, "6" won't be in their arsenal of "woos." 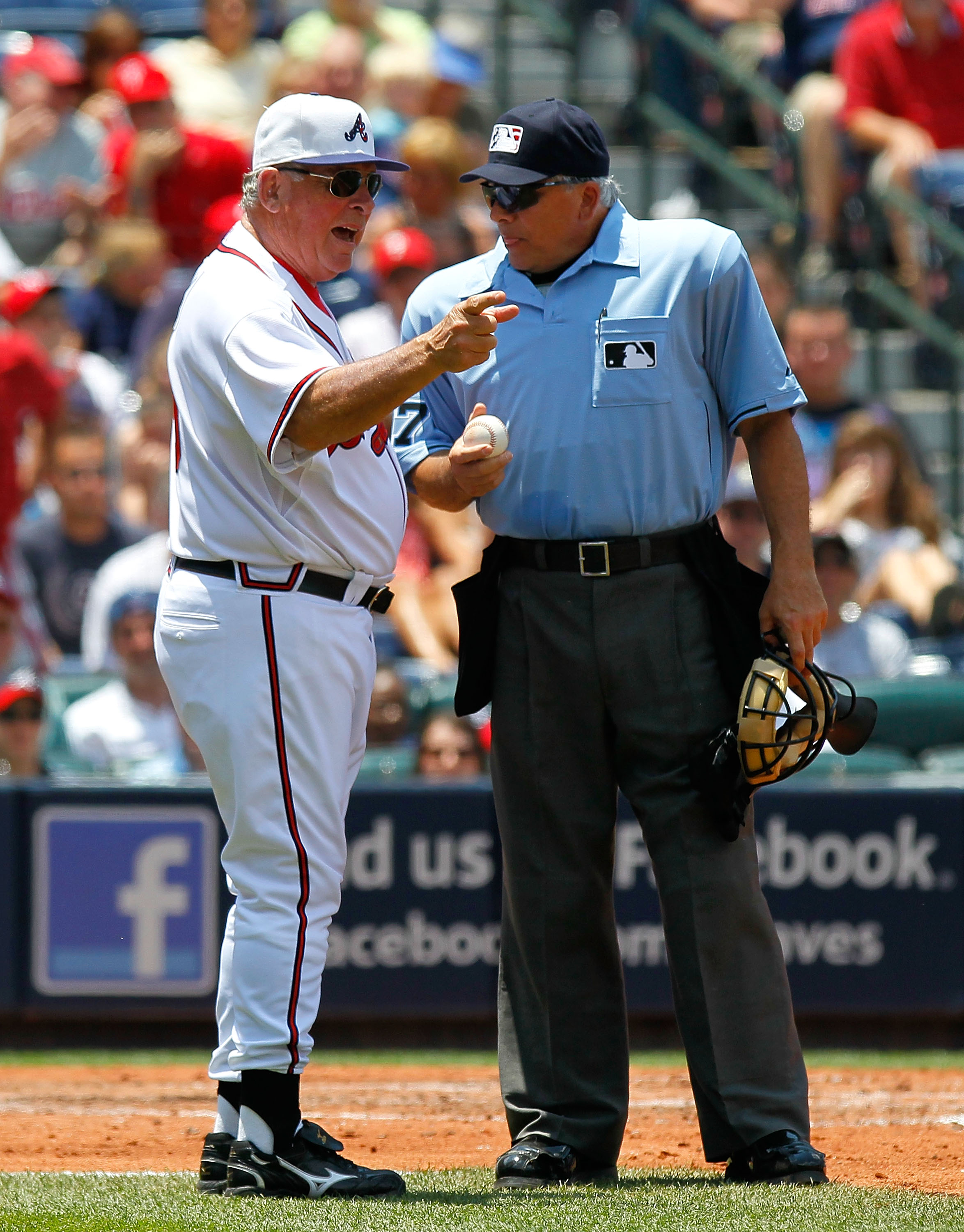 You don't get to 2500+ career wins being a wet blanket that mopes around in the tunnel with sealed lips.

If you do that, you get fired pretty quickly...that is, after your team collapses around you and rebels.

No, what you have to do is stand up for and behind your players.

That's how you get 158 ejections and the respect we touched on in No. 3.

By riding ups and downs, hot streaks and slumps, and putting up with the occasional mental lapse, Bobby Cox has been able to get the best out of the men he's been charged with handling for parts of 30 seasons.

While this isn't necessarily a tangible thing to ogle at, professionalism on the field most certainly is.

While that (hopefully) won't change under the next manager's helm, the aura of the "pro's pro" nature of the Braves' on-field actions (more on that in a second) created by Cox's "rule" will be missing (that's not to say that it will be a field full of Yunel Escobars...oooo...that was a cheapshot and I regret that...). 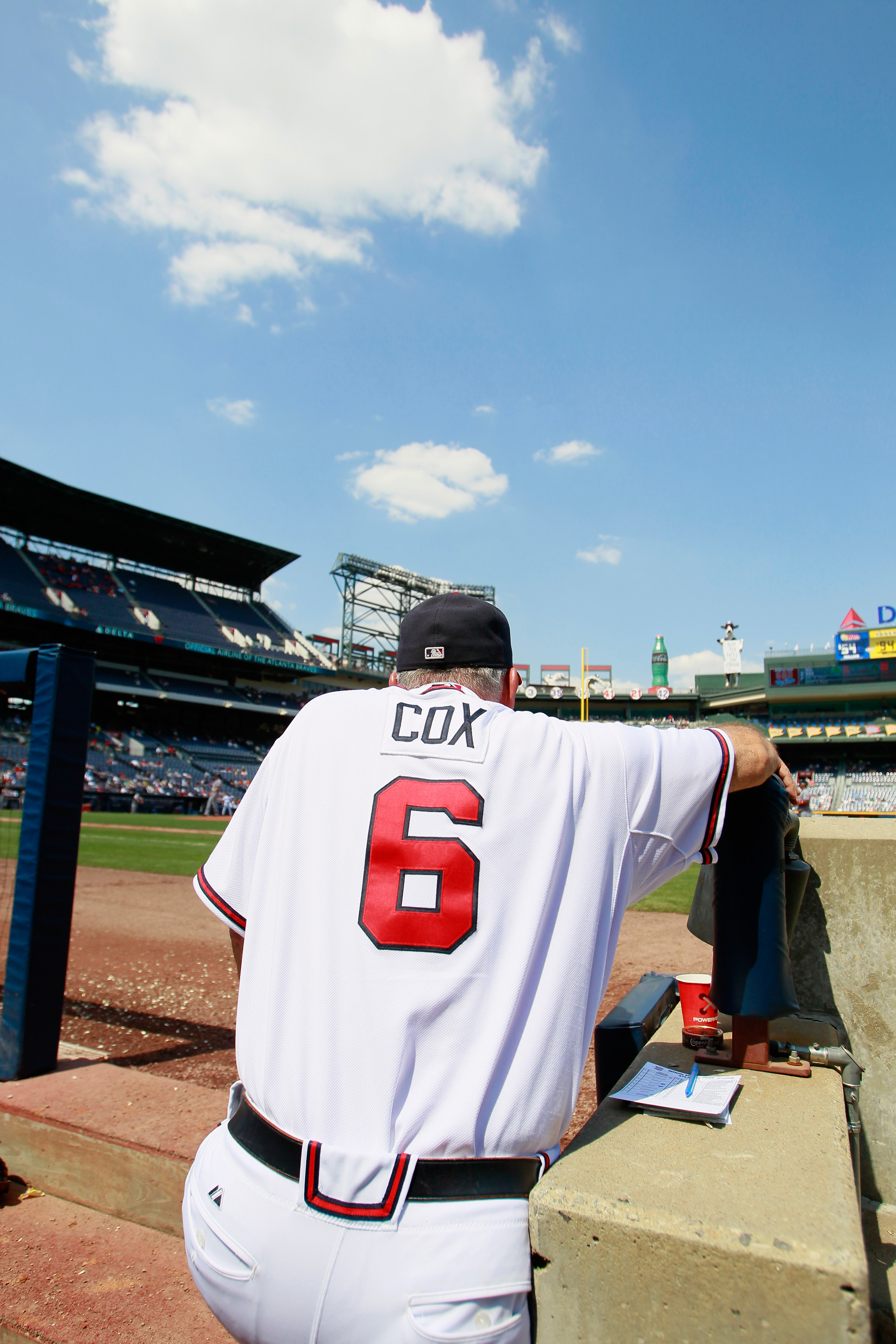 This is a kind of bland and generic "all of the above" slide--but it's true.

If you roll the things we briefly discussed into a package, it'd be a priceless memento for the game of baseball.

From his passion for the game, to his sometimes-unorthodox decision-making in-game, to the veracity with which he has torn into umpires antagonizing his players (I'm looking at you, Bill Hohn), Bobby Cox embodies everything the "baseball lifer" should be.

As he departs, many Braves fans are going to be kissing the next skipper's feet (which probably won't be donning cleats as Cox does now) because "wacky ol' Bobby" is gone.

But even those folks have to concede this one fact: despite seeming shortcomings at times, Bobby Cox has been a pleasure to watch and absorb on a night-in and night-out basis.

The closest thing to him is...well...there isn't quite any one (MAYBE Jim Leyland) that mixes flamboyancy, vigor, and knowledge the way No. 6 so expertly does.