Carmelo Anthony: Why He'll Never Win a Title No Matter Where He Goes 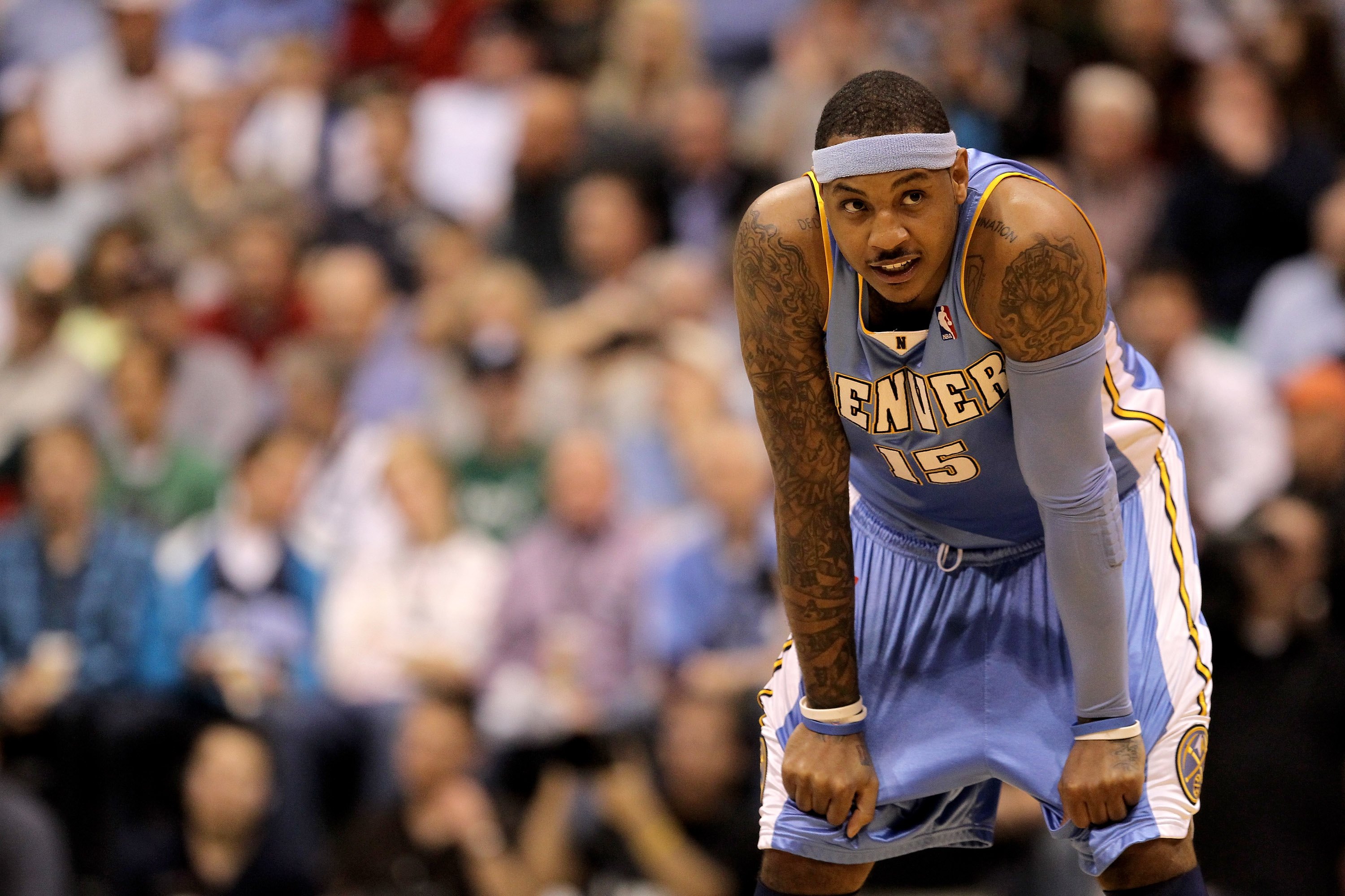 Carmelo Anthony could be headed to the Nets in short order, according to a Yahoo! Sports report.

The trade to the Nets would reportedly involve four teams and include Anthony and Derrick Favors, the third-overall pick of the 2010 NBA Draft.

No matter where he ends up, Anthony will need to play out of his mind to capture what has proven to be an elusive NBA Championship.

The odds are stacked against him ever reaching the pinnacle of team success at the NBA level.

Here’s a look at 10 reasons why Carmelo Anthony will never win a championship in his career, regardless of where he takes his sizable talents.

No. 10: Unproven in Big Games and In the Clutch at the NBA Level 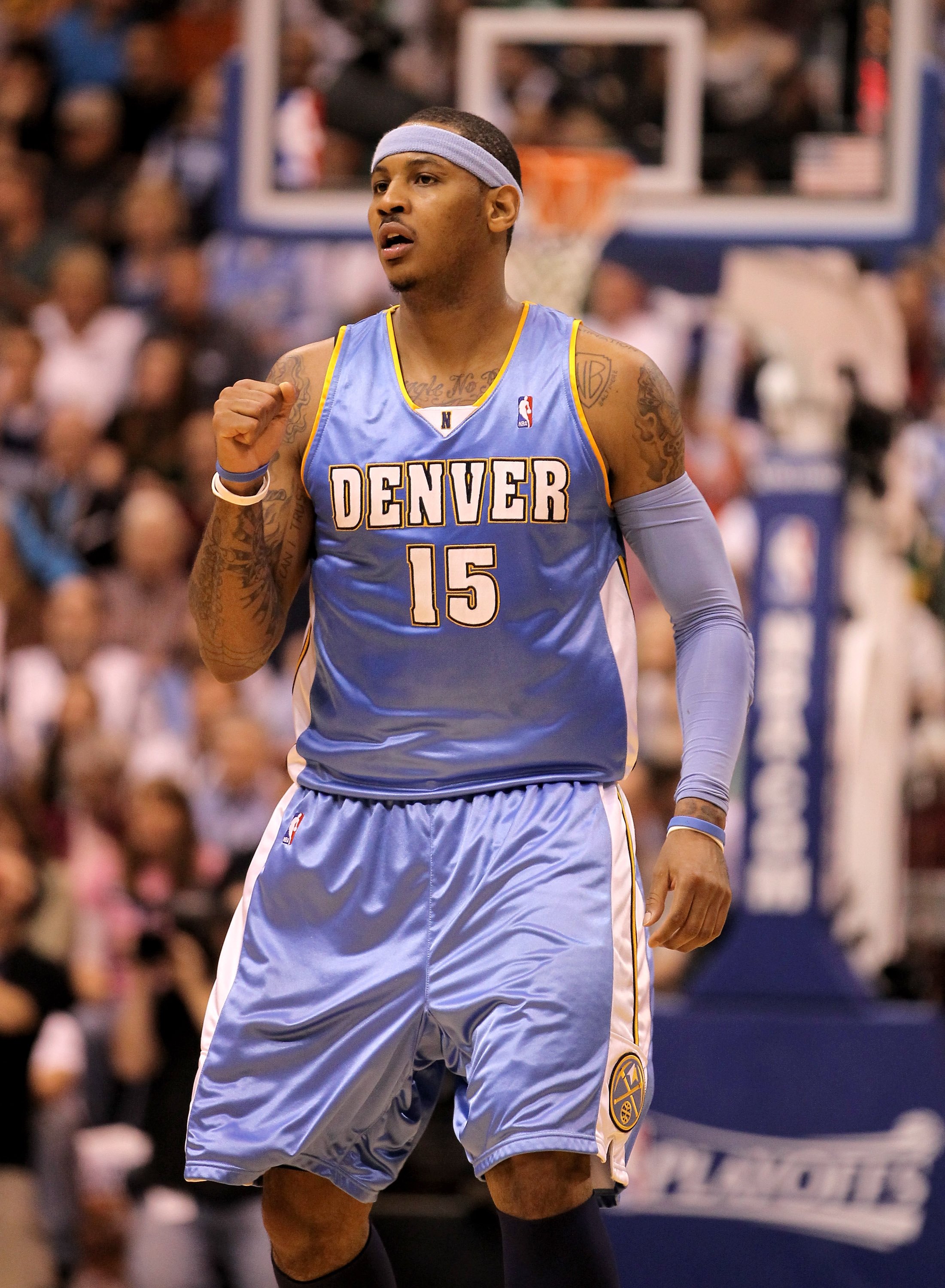 Carmelo ensured himself a place in the annals of college basketball history by his performance in the Final Four as a freshman.

Melo elevated his game to an even higher level on the biggest stage, scoring a freshman-record 33 points against Texas before posting a double-double in the National Championship game against Kansas.

The historic success in college has yet to translate into performances on the biggest stages in the NBA, primarily because his teams have had minimal success in the postseason.

Until Carmelo gets more chances to show what he can do in clutch games at the NBA, the jury is still out on whether he will underachieve like LeBron James or rise to the occasion like Michael Jordan.

No. 9: Never Been the Undisputed Team Leader 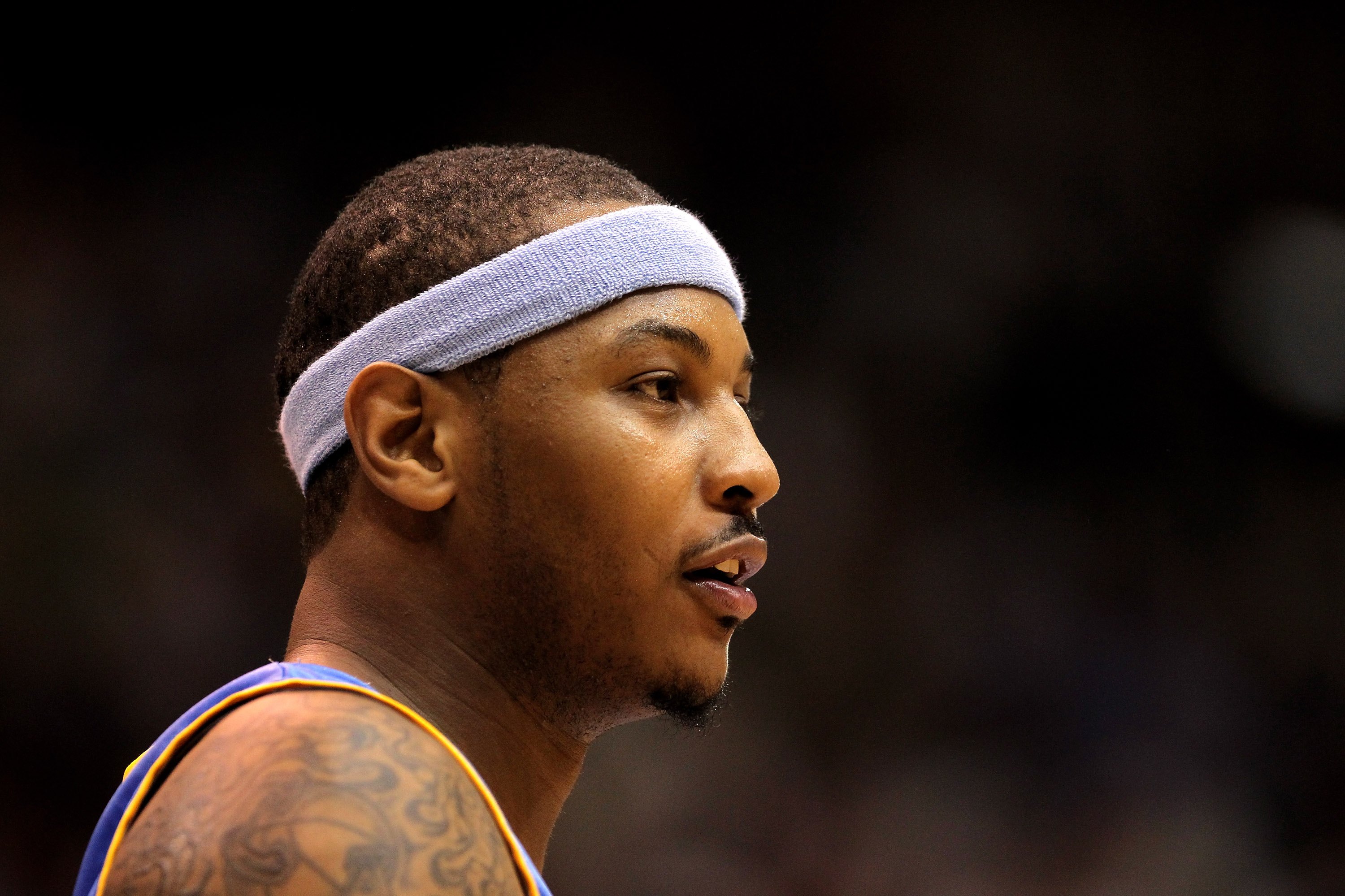 Even when he led Syracuse in virtually every statistical category as a freshman, Carmelo wasn’t a true team leader.

In the NBA, his leadership and maturity have been questioned on numerous occasions.

The arrival of Chauncey Billups and the constant prodding of George Karl helped Anthony finally began to showcase some maturity last season.

The talent to be a so-called alpha-dog is there, but the mentality to lead and have others follow might not be. 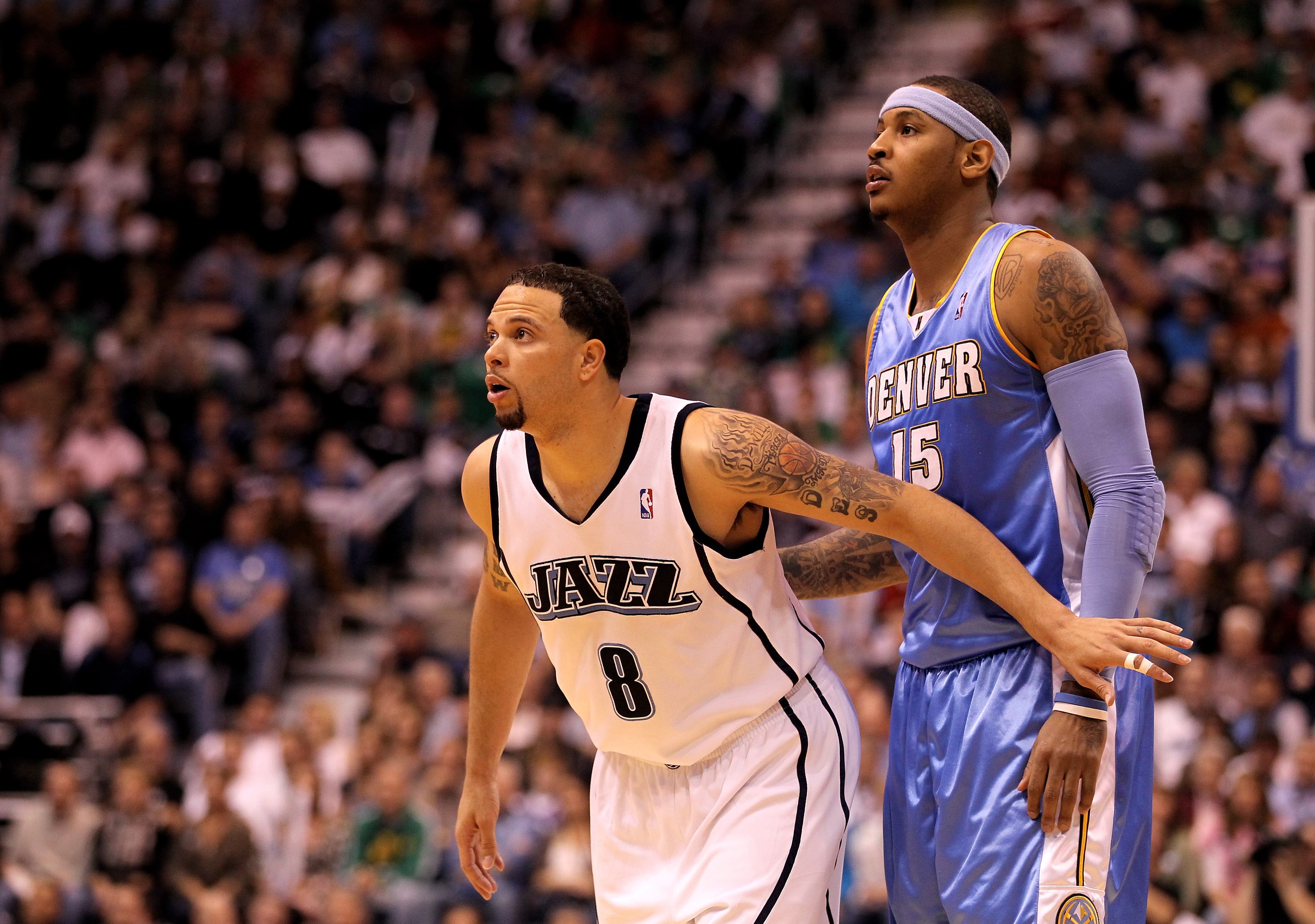 The popular opinion is that Carmelo wants out of Denver because he never thinks he will be able to win there.

The Nuggets are entering somewhat of a transitional face with Josh Kroenke taking over the ownership duties.

Despite signing free agent Al Harrington to a fairly lucrative deal in the offseason, there have been indications that the team might want to start rebuilding after this season, if not sooner.

In this case, change wouldn’t be such a good thing. 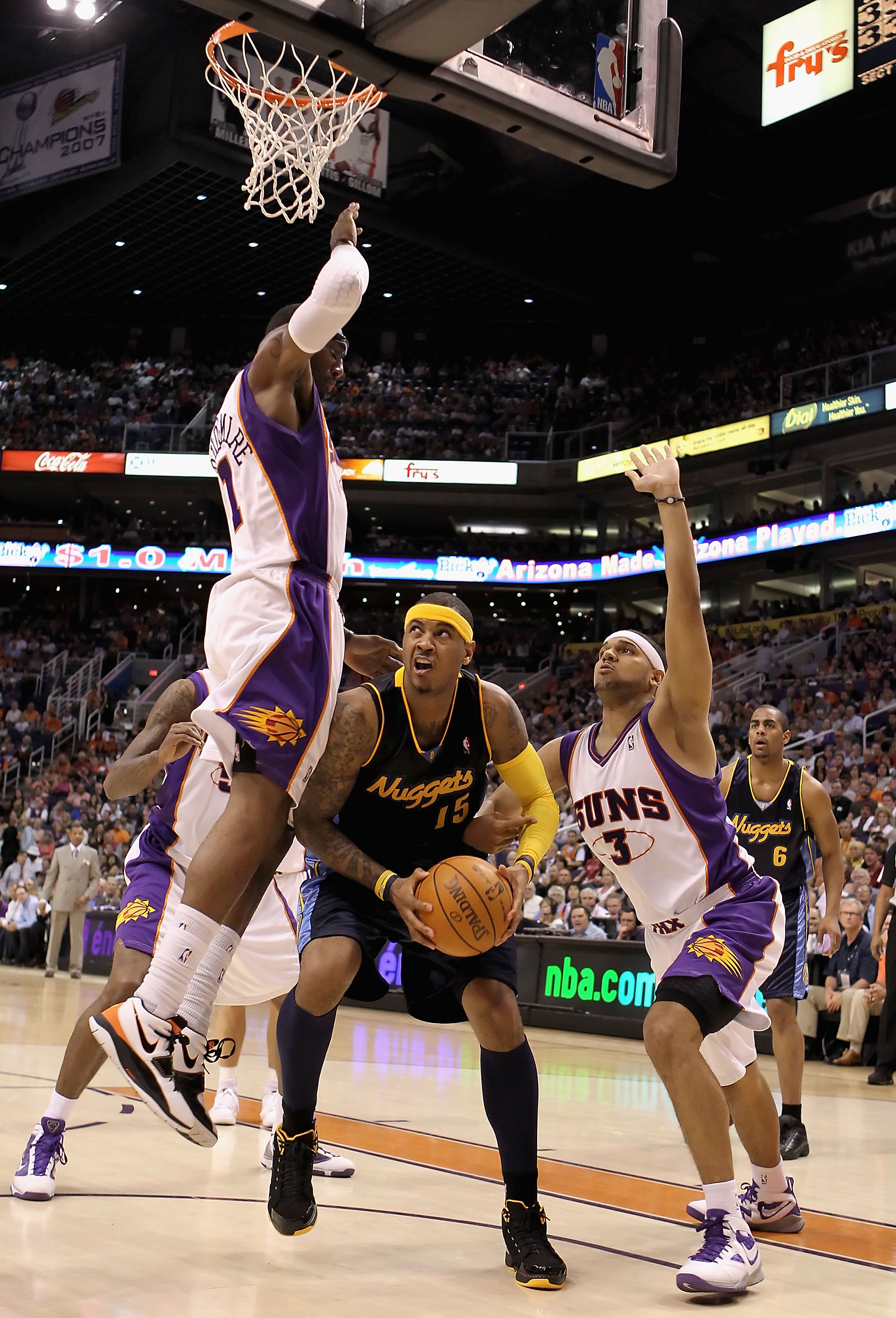 New York has long been the sexiest destination for Carmelo and lovely wife La La.

If the Knicks were somehow able to pull him from the grasp of the cross-town Nets, one of the most potent offenses in the NBA would be delighting fans in the Garden.

But would they be winning?

The prospect of Amar’e Stoudemire needing to play extensively at center, where he would need to do two things he isn’t particularly fond of; rebound and defend. That alone should be enough to make Knicks’ fans wary of what was to come.

Without a true center and an upgrade at the point, a Knicks’ team featuring Carmelo wouldn’t have much of a chance to reach the NBA Finals. 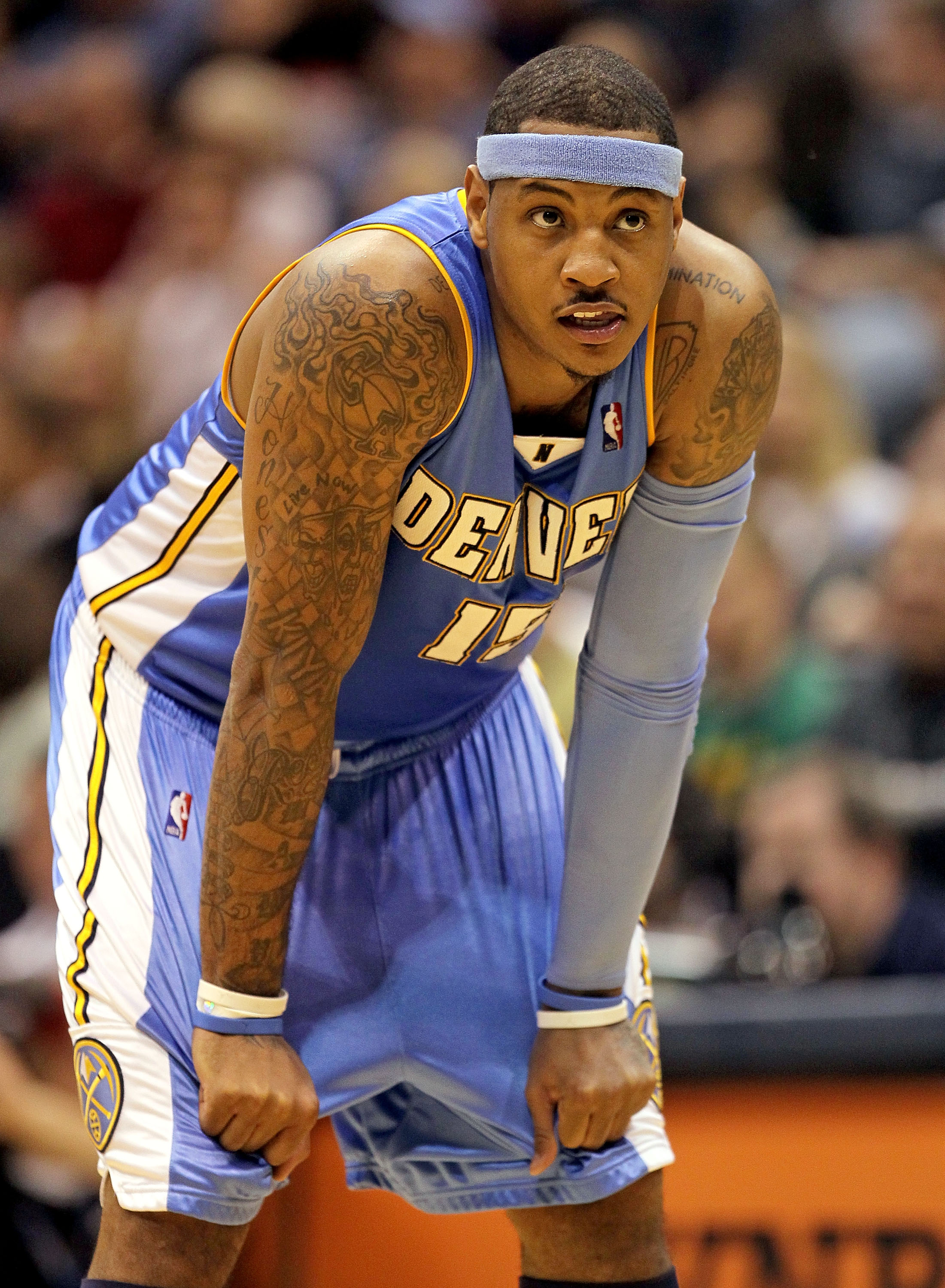 Despite his rumored strong desire to play in the Windy City, Carmelo isn’t likely to end up on the Bulls.

If he did, it would likely be at the expense of losing Joakim Noah as a teammate.

Noah’s rebounding and defense gives the Bulls a big edge against many opponents, and adding Anthony to the mix would make Chicago an absolutely lethal squad.

The problem is that will never happen.

The Nuggets want Noah in a deal for ‘Melo, and the Bulls have balked at moving their pivot man in the soft negotiations that have taken place.

That means Anthony would come and Noah would go, leaving a huge void in the middle and making Chicago nothing more than 50-win team destined for playoff failure. 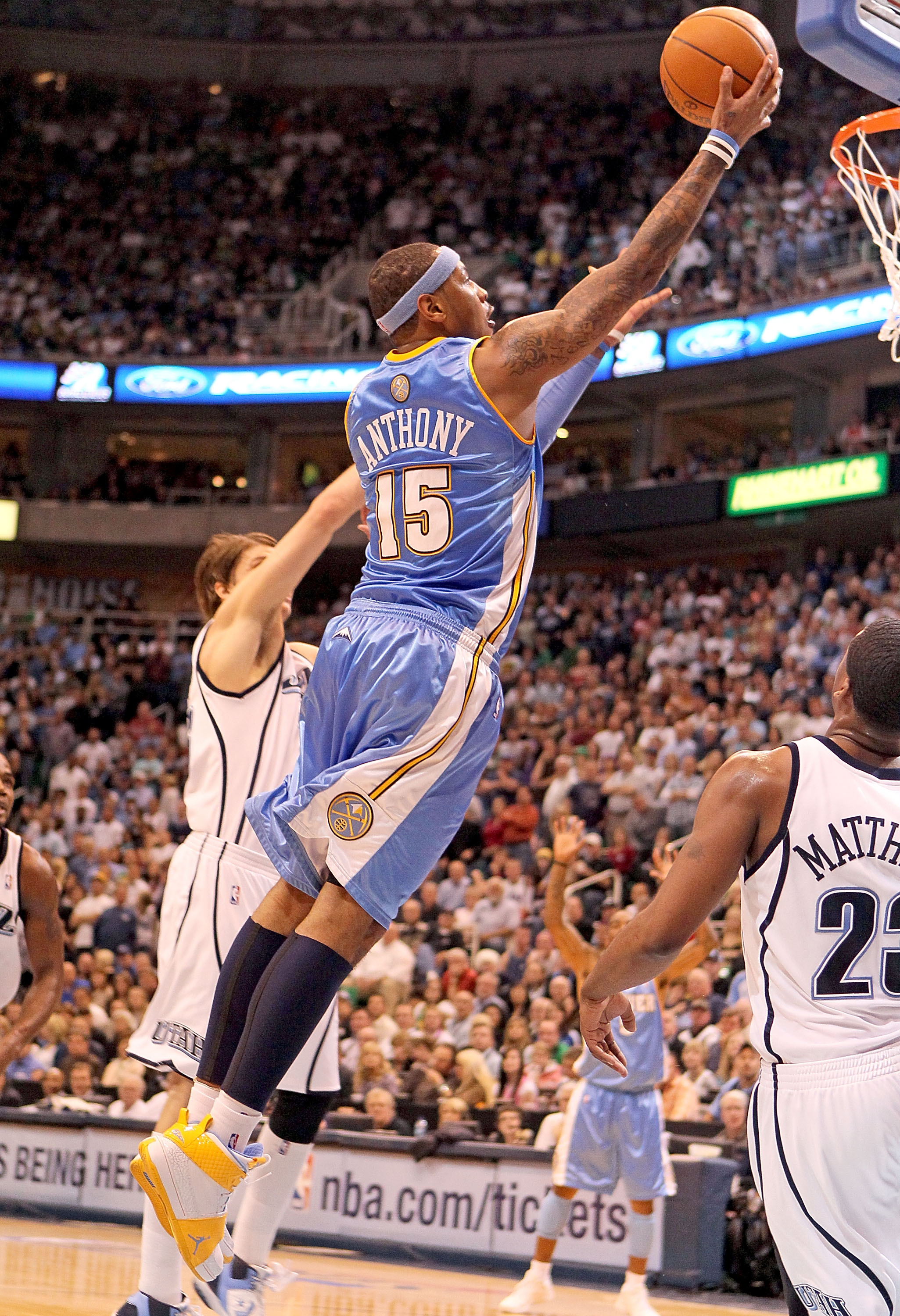 In all likelihood, Carmelo Anthony is heading east.

His fate and the fate of the soon-to-be Brooklyn Nets would be difficult to predict, making it unlikely to expect championship-caliber success.

Already with Devin Harris and Brook Lopez in place, the team appears to have a nice core ready to compete against the beasts of the East.

The injury history of Harris would be troubling, and aside from Lopez, New Jersey would have few defensive-oriented players on the roster.

Keep in mind that acquiring Anthony will likely cost the Nets power forward Derrick Favors, and also possibly ultra-tanned sharp-shooter Troy Murphy, currently projected to be the team’s starter at the four spot. 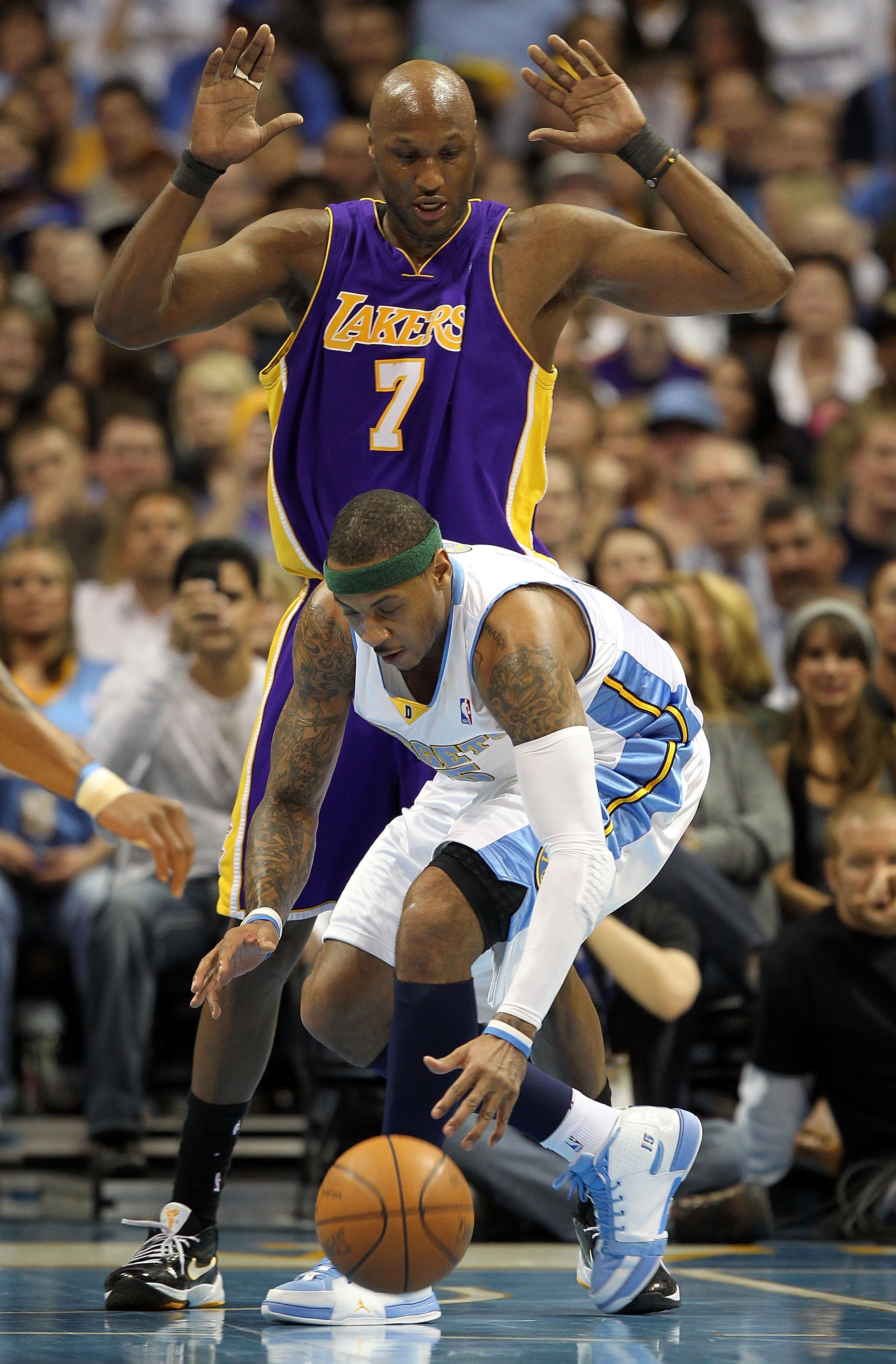 Carmelo’s attention and effort on the defensive end has improved, thanks primarily to his Olympic Team experience.

But are his defensive skills really good enough to help one of his potential teams take it to the next level?

Given the defensive issues of the Bulls (without Noah), Nets, Nuggets and Knicks, Anthony would likely be asked to step up his defense even further.

There’s no evidence he would be capable of rising to the task.

No. 3: Not a Great All-Around Player 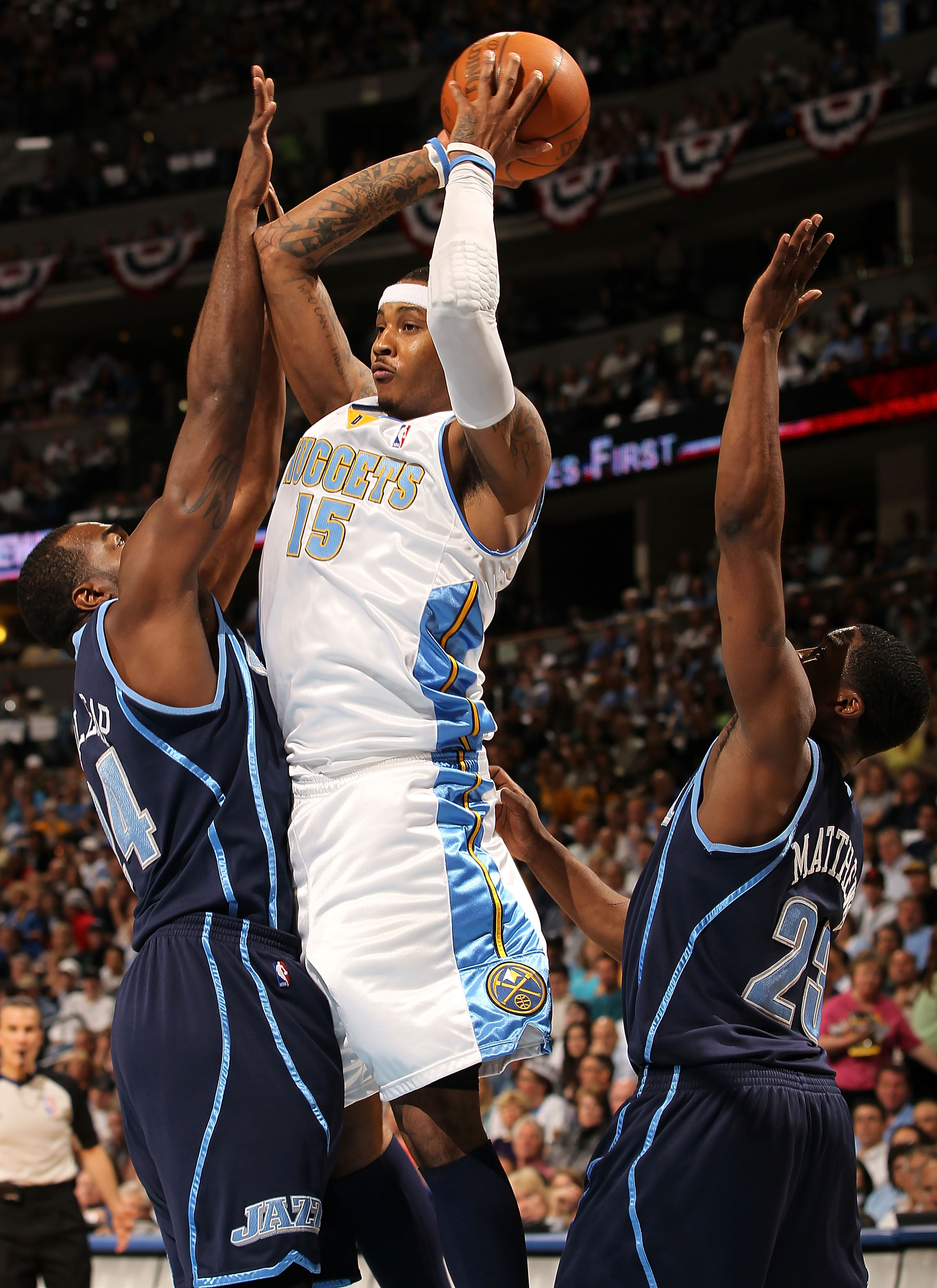 Although Carmelo’s all-around numbers improve drastically in the playoffs, he has never been a particularly well-rounded ball player.

His size, length and athleticism should enable him to average more than 6.2 rebounds per game for his career.

Despite routinely facing double-teams and controlling the ball, he averaged just 3.1 assists per game last season.

The true mark of an alpha-dog on a championship team is the ability to make average players around him better.

Carmelo Anthony has yet to show he is capable of that.

No. 2: Simply a Pure Scorer 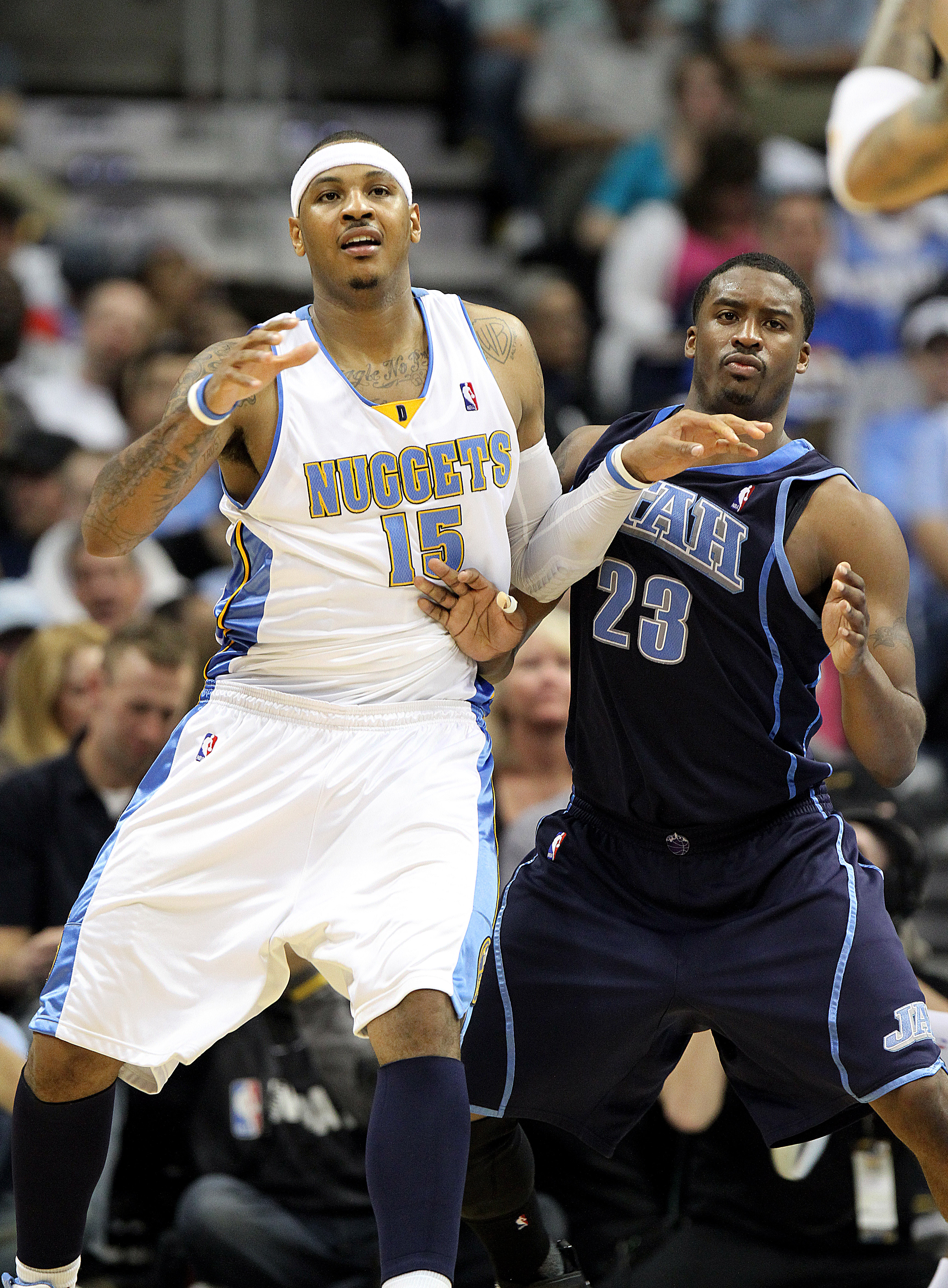 Carmelo is a great scorer and a fairly efficient scorer. The point simply can’t be argued.

But can he do what others have done and expand his game?

Michael Jordan is the most obvious example of a dynamic scorer who learned to pass the ball, play defense and contribute in more subtle ways.

Anthony doesn’t have Jordan’s handle or incredible athletic ability, but his size and considerable skills should enable him to do more.

Now it’s time for him to show it…

No. 1: There Is No Perfect Situation For Carmelo 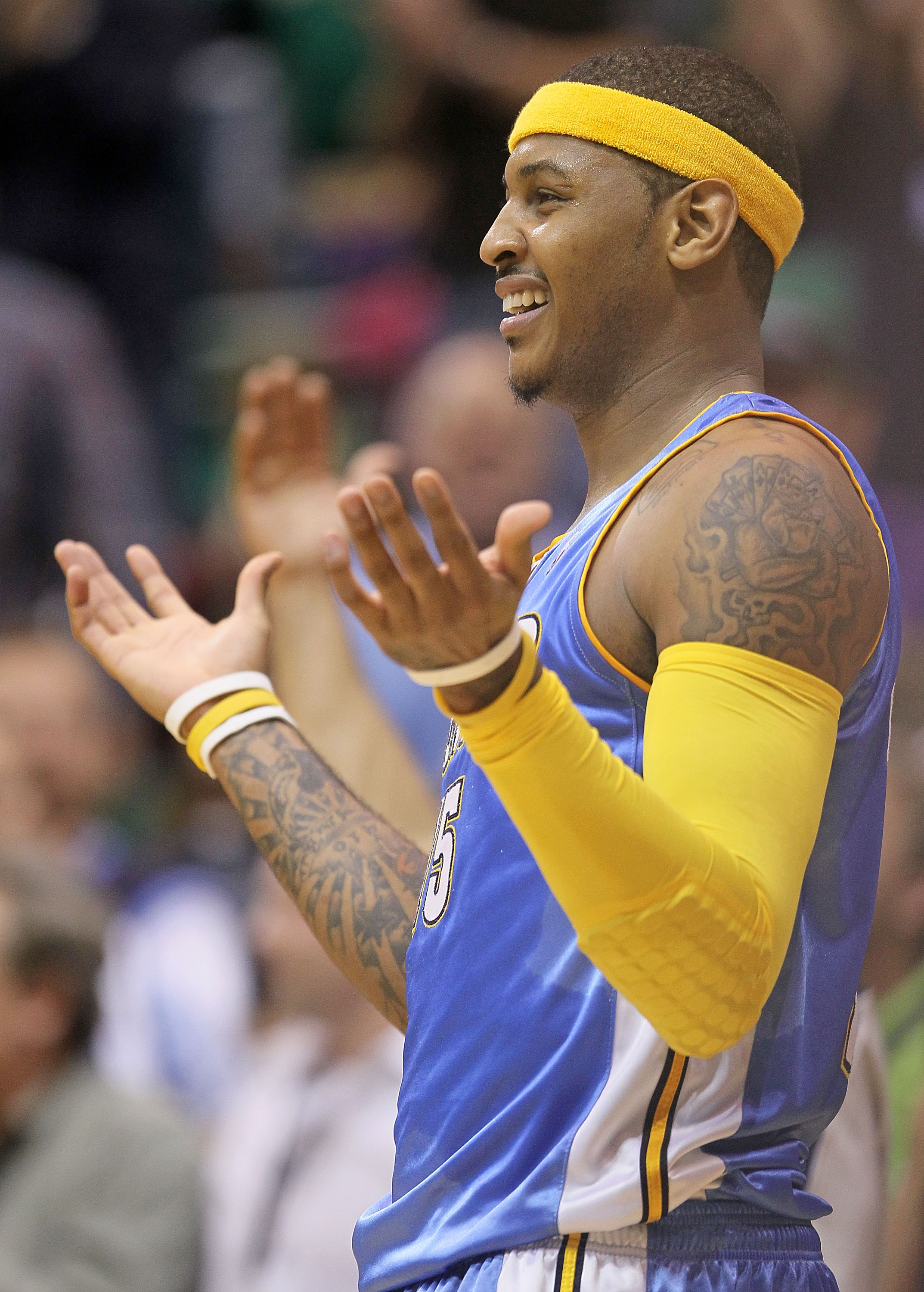 LeBron’s decision may have been controversial and painful for NBA fans in Northeast Ohio and beyond, but it clearly put him in a better position to win a title.

Carmelo’s fate will be decided without the luxury of walking into a team poised for historic success.

The Nets, Knicks, and Bulls all have been questions that must be answered. Staying is barely even a possibility at this point with the Nuggets looking to save money and start over.

Wherever Carmelo goes, he won’t be in a situation that gets him much closer to an NBA Title.

Most importantly, his new team will have little chance to compete with the triumvirate in South Beach.

Carmelo Anthony appears destined to go down in the annals of NBA history as one of the best players to never win a championship.