When an athlete tries out for a college football team, he has at least some hope, as slim as it might be, of making the team.

At USC, where a walk-on is pitted against a select group of the nation’s finest high school players who are on scholarship, he had better have a lot of hope as well as a high degree of talent.

Ben Malcolmson had no hope at all of making the team back in 2006 when he walked onto to Howard Jones Field to try out for the Trojans. In fact, he was certain that he would not make it.

Malcolmson grew up in Dallas, where he ran cross country and track in high school. He hadn’t played football since the fifth grade.

He came to USC because of the academics and to experience living in a new place. Up until his senior year, he had not taken part in any collegiate sports.

Instead, he covered sports for the college newspaper, The Daily Trojan. During the first semester of his senior year, he became the newspaper’s sports editor and was a familiar figure hanging around Heritage Hall, home of USC’s Athletic Department.

It was his nose for news that suddenly changed his life.

"I saw an ad for football tryouts," Malcolmson explains, "and I thought that would be a cool story to write about. I thought the best way to do that was to actually go through a tryout instead of just writing about it. I had no intention of making the team. I hadn’t played football since the fifth grade, so that idea didn't even cross my mind."

Malcolmson figured he would go through this unique experience and share it with his readers. That was the full extent of his purpose in trying out. "Little did I know that I would get a call saying that I made the team," Malcolmson confesses.

Once he got the inspiration, you would think that he would get serious and immediately hit the weight room, start running 40-yard dashes and practice cone drills. But that was the case.

"I knew that it would be physically exhausting, so I wanted to get in some shape," he admits. "So, I ran a couple miles a day for a few weeks, but nothing too serious."

When he finally got to the tryouts, however, he was surprised to discover that things were more than just physically exhausting.

"I think that everything was new to me—all the football stuff—like running 40-yard dashes. I never ran a 40-yard dash before. That was new, and doing all the agility drills like running around cones and backpedaling, that was hard for me because I had never done it before."

So, there he was in the middle of more than 30 walk-ons with all the coaches looking on.

"I specifically remember Coach Carroll making some comment and Coach Norton the linebackers coach making a comment. They were all going, ‘Oh, it’s the newspaper guy.’ They all knew me from the school newspaper."

But the surprises didn’t end when the tryouts were over.

"They were going to post a list (of those who made the team) two days later," Malcolmson recalled. "I was going to go in right when it was posted just to get a reaction from all the other people that tried out and made the team. I wanted to see how those guys were. I wasn’t going to go check it to see if I had made it."

That would be the last thing he would want to do since he had no hope of making the team in the first place.

"I actually got a phone call from a friend who was walking by Heritage Hall a few minutes before I was going to go in. She asked if I had tried out for the team. I said, ‘Yeah, but it was just for a story.’ Then she said, ‘Well, you made it.’ I thought she was joking. So, I just laughed it off. She was like, ’No, I’m serious; you made it.’ And then it just hit me like a ton of bricks."

How did he feel at that very moment?

"It just takes your breath away. You just go into shock. It was insane. I couldn’t breathe. So, I ran over because I wanted to check it for myself, and there it was. But then again I thought it was a joke from Coach Carroll because I had known him for a few years from covering the team. (I thought) maybe he’s just pulling a prank on me."

Pete Carroll is known for his many pranks, but this was no laughing matter. At least, Malcolmson didn’t think so.

"So I went up and talked to him," Malcolmson explains. The thrill he gets recalling that moment even two years later hasn’t diminished. "He said, ‘No, I’m serious. I want you on the team. You’re quick and you’ve got good hands. ‘That was when I was like, ‘Wow, this is real.’ So, that’s a no-brainer. It’s not like you’re going to turn down that offer."

But once the excitement wore off, the hard work began.

"Practices, that was such a challenge. Obviously the physical side of it is hard with all the drills. And I never played football, so I didn’t really know what to expect. It’s like the first time when you were on a roller-coaster. You were scared out of your mind because you didn’t know what it was going to feel like.

"Before that first practice, I’m just psyching myself out. How’s it going to feel like if I get hit by an All-American linebacker? But once that first hit comes, just like when you’re on a roller coaster, you’re going, ‘Okay, that wasn’t too bad. So, that’s football.’ Then you feel like you’ve made it. You got hit. It’s sort of like an initiation."

But that wasn’t the hardest part.

"Even harder than the physical side of it and getting hit and then obviously it’s demanding conditioning wise and strength-wise, but much harder than all of that is the mental side of it.

"Where are you going to play? You’ve got to be so focused all the time when you’re out there because the play is twenty seconds long. Then you have to go back and run another play and you have to know exactly where to line up and where to go. How you’re going to work with the guy next to you."

How did Malcolmson manage to deal with the mental challenge?

"When you’re not on the field or you’re not in meetings, you ‘re sitting there studying the playbook, trying to learn it. It’s such a challenge, especially for someone who didn’t have that background in football."

So, that’s the hard part. What about the good part?

"(During practices) I was on the scout team playing wide receiver and helping our defense week in and week out. It was pretty cool though because that year (2006) we had Dwayne Jarrett and Steve Smith as our top receivers.

"Those are two all-Americans right there. Just to be on the same squad as those guys was pretty cool. They just had so much knowledge of the game. Getting to learn from them, that was awesome."

Does a walk-on really hope he can get into a game or is it just wishful thinking?

"When you’re going through it and you put that uniform on and you walk out the tunnel on a Saturday at the Coliseum, that is the highest of all highs right there. You think nothing can be better than all of this.

"Obviously it’d be cool to get in a game, but you’re just so grateful to put on that cardinal-and-gold jersey and to represent the Trojans, even as a walk-on and you don’t get to play.

But Malcolmson did get into a game.

"It was the last play of the game. It was a quarterback kneel. It wasn’t like I caught the winning touchdown pass or anything like that. But it’s still an official play. And it goes down that I got that one play in the scorebook."

How did he feel after that?

"Getting into a game, that just added that little something extra. I mean it wasn’t little at all, it was huge, getting called in and playing that one play against Notre Dame. That was just a storybook ending."

But once a walk-on graduates, is there life after football?

"After I finished playing, I was looking for a job. I came to Coach Carroll. And it was really being at the right place at the right time because he was looking to start a new website for himself and for the football team called USCRipsIt.com.

"I didn’t even ask him about a job or anything. He just said, ‘You know what? You’d be the perfect person to run this site.’

"It was just an ideal situation for me. I had just finished up my degree and being able to stay connected with the team and on campus, that was perfect."

So, Malcolmson took up Pete Carroll’s offer and started USCRipsit.com from the ground up.

"It’s been really cool," he admits, "because we have so much room to run with this, and we’re going into uncharted territory in terms of providing fans a look at the Trojans. No sports team has done something like this, where it’s so behind the scenes and so connected with the team and just minute-by-minute, too."

I can personally attest to that. This past Sunday, USC held a rare 7:30 p.m. practice that ended well after 10 p.m. By the time I got home and cranked up the computer, some time after 11 p.m., USCripsIt.com was the only Trojan site to have a report on that evening’s practice.

"The fans have really taken to it," says Malcolmson. "They really enjoy the access that it provides and the personality it has. It really adds a lot to the whole experience of being a fan, and it’s been really cool being in charge of that."

Another important aspect of USCRipsIt.com is the coverage that it provides for Pete Carroll’s work with inner-city youth through an organization he created called A Better L.A.

"One of the main goals of the site is to get A Better L.A. out there more," Malcolmson explains. "Anything that we sell (on USCRipsIt.com) the proceeds go towards A Better L.A. So, it’s been really cool being able to make an impact in terms of getting the word out about A Better L.A. and also as a fund-raiser for A Better L.A."

Although his days as a football player at USC were short-lived, Ben Malcolmson enjoyed every minute, and he continues to enjoy his on-going connection with the team and his involvement with the work Pete Carroll is doing both on and off the field.

So, if you haven’t had a chance to check out the site as well as its complimentary site, www.PeteCarroll.com, what are you waiting for?

It’s another first for the USC Trojans and another storybook ending for Ben Malcolmson. 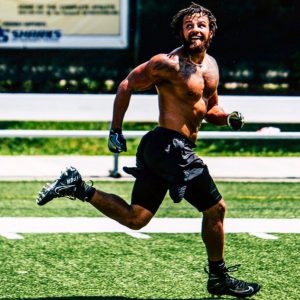