Mascot Fight: The Worst Behaved Mascots of All Time 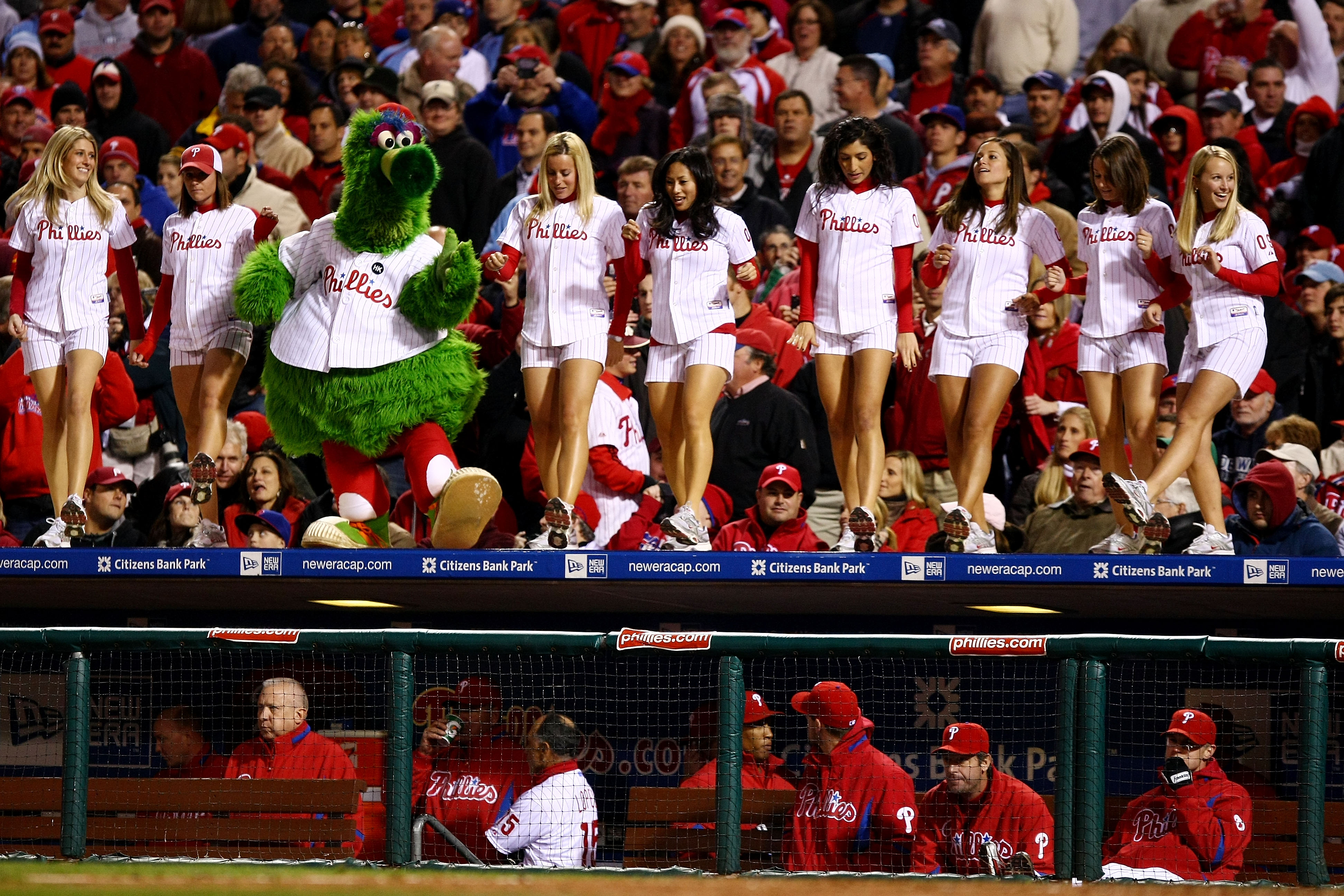 It's not just teams that get into heated battles on the field or court.

Their mascots, cloaked in costume to entertain fans, sometimes find themselves in hot water.

Some get arrested for crowd surfing. Others start brawls with players or the other mascot. The unfortunate few receive a 15-yard unsportsmanlike penalty from referees.

No matter the sport, mascots have been known to get frisky.

Here are 15 of the worst-behaved mascots of all time.

No misbehavior from a mascot in this scenario.

In 2003, Pittsburgh Pirate Randall Simon took his frustration out during the Milwaukee Brewers human sausage race.

Simon was arrested and fined $432 for swinging a bat at the woman in costume, knocking her to the ground.

As part of the NL Central cellar team, things must've finally snapped for the first baseman.

The Oregon Duck and Utah's Swoop

How traumatic would it be to see a mascot without a head?

Well, that's exactly what happened during a first-round March Madness game in 2003.

In a halftime scuffle between the Oregon Duck and Utah's Swoop, Swoop accidentally ripped off the duck's head.

After the pair was sent to a room beneath the stands to make peace, they came back to center court hugging, which prompted a standing ovation.

A few years ago, the pants-less duck rolled up his sleeves once more and beat up Houston's Cougar.

Who knew that Disney characters could be so violent?

It's not just the fans in Philadelphia who cause trouble.

For a few seasons, the Phillie Phanatic caused a ruckus when he used a Tommy Lasorda doll as a punching bag on top of the Los Angeles Dodgers dugout.

In 1988, Lasorda finally snapped and the pair exchanged punches, with the mascot almost losing his head in the altercation.

On another occasion, the Phanatic hugged a fan so hard that he suffered back injuries and was awarded $2.5 million.

To that tune, Phillie has become the most sued mascot over time.

Not all Rockys become champion boxers.

During a running feud of several years, the Denver Nuggets mascot, Rocky the Mountain Lion, challenged Charles Barkley to a boxing match, only to get KO'd in the face in 1995.

At Barkley's final NBA game, Rocky was flown out to see the then-Houston Rocket. Barkley offered a friendly handshake before sneaking one final punch.

Off the court, Ken Solomon was arrested in 2001 for first-degree trespassing and harassment resulting from domestic violence.

In a heated battle between Western Athletic Conference (WAC) rivals, the Utah State and New Mexico State mascots got in on the action toward the end of a semifinal game last year.

During a timeout with seven seconds left, Big Blue the Bull of Utah State confronted Pistol Pete Cowboy by ripping off his fake mustache.

Not having any of it, the cowboy chased the bull to halfcourt, jumped on his back, and tried unsuccessfully to pull him to the floor.

Pistol Pete started to choke Big Blue before heading back to his end of the court. 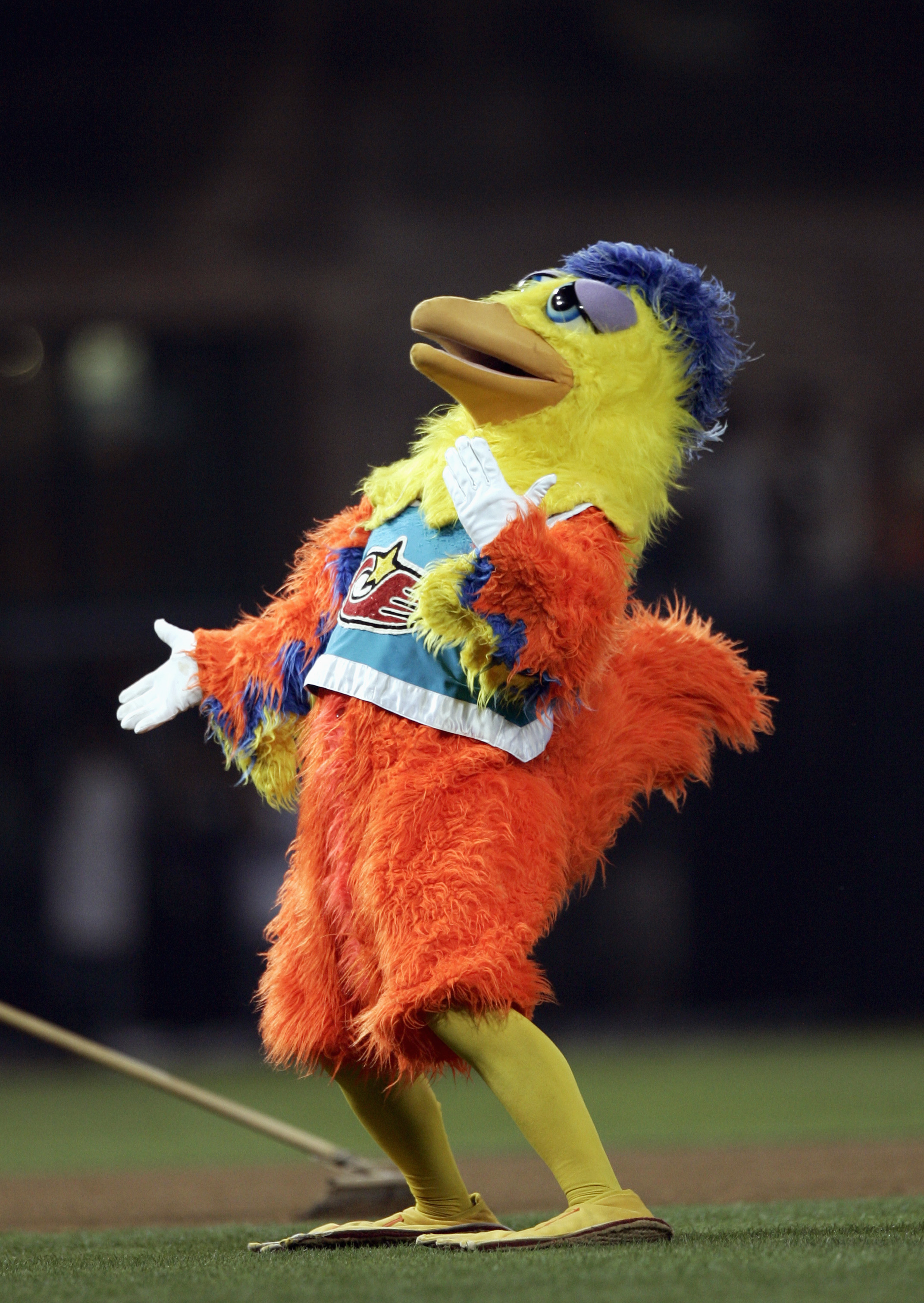 It's hard to believe the San Diego Chicken found someone who wasn't a fan of poultry.

In 1991, he was sued by a Chicago Bulls cheerleader after he danced with her and rolled with her on the floor. If that wasn't bad enough, the chicken needed to dish $317,000 in damages.

No word on whether the cheerleader preferred beef. 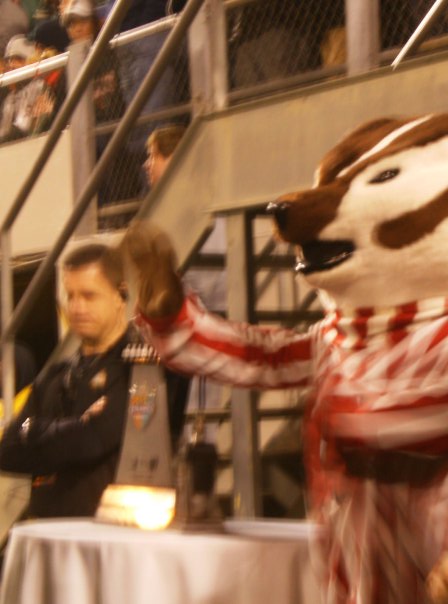 No matter the attire—whether it be school colors or a mascot costume—they just want to have fun at sporting events.

Wisconsin's Bucky the Badger was no exception in 1996 when he was arrested and issued a $141.50 ticket for crowd surfing in the student section.

The booking officer had to put up with his shenanigans. When asked for his name, the student answered with "Badger. B-A-D-G..."

Following the incident, he sported a black-and-white striped turtleneck.

If that's not enough, Bucky began a premature celebration with the Champs Sports Bowl trophy last year despite around six minutes left on the clock.

Though the Miami Hurricanes' comeback fell short on fourth down after a late touchdown and recovered onside kick, the badger lucked out.

Isn't it appropriate that once the cameras started rolling, a brawl broke out?

During an ESPN-televised timeout in 1995, the Stanford Tree and California's Oski got involved in a wrestling match.

Oski taunted the Stanford student section and the tree attacked. Police had to separate the pair, but no charges were filed.

What other mascot can say it landed on "Jerry Springer" because of a love triangle?

For Benny the Bull, that was just the beginning.

In 2008, Benny was courageous enough to shoot at both Kevin Garnett and James Posey from behind with a t-shirt cannon toward the end of a Chicago Bulls/Boston Celtics game.

Benny stood a safe distance away while Garnett had to be restrained by the officiating crew.

That same year, Benny accidentally hyperextended a man's arm and ruptured his bicep muscle on a high five. The oral surgeon had to miss four months of work.

Two years prior, Benny punched a police officer after running away on foot at a festival. He had been stopped for riding a mini-motorcycle without a permit.

Don't mess with the little schools, especially during a 45-10 blowout.

James Madison's Duke Dog kicked Coastal Carolina's Chanticleer in the rear as he was walking away. The Chanticleer then delivered an impressive hit.

Interesting enough, the police officer didn't step in until the Chanticleer did his damage. When Duke retaliated, he was arrested.

The Wildcat and Razorback

Evidently these mascots didn't get the memo that they were cheering on a college basketball game.

In 1994, Arizona's Wilbur Wildcat tackled Arkansas' Razorback from behind during a Final Four game.

While Wilbur blew out his knee in the process, he missed the remainder of a 91-82 defeat that eliminated Arizona. 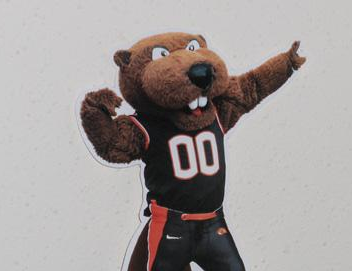 Talk about messing with the wrong people.

In 1995, Benny Beaver of Oregon State was slugged by California offensive tackle Tarik Glenn on his way to the locker room when the mascot tapped him on the shoulder with an inflatable hammer. 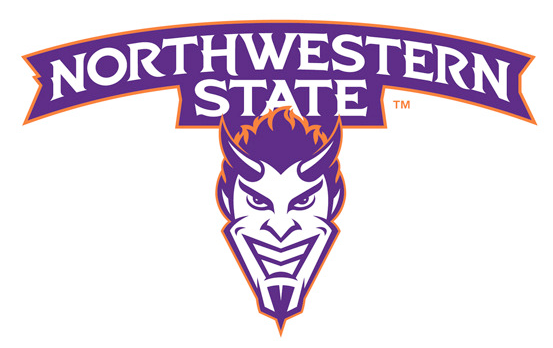 What better time to start a fight than during a homecoming game with alumni and parents in the stands?

In 1992, a fight broke out between Northeast Louisiana and Northwestern State.

Northwestern State's Vic the Demon landed a series of haymakers, or a type of punch in street fighting, after Chief Brave Spirit ripped off his mascot head.

Alas, the origin of MMA fighting!

Who said that canines were man's best friends?

In 1996, Uga, Georgia's iconic bulldog, tried to get a bite of Auburn wide receiver Robert Baker when he ran out of bounds.

Three years ago, a security dog bit an Auburn defensive back toward the back of the end zone following an incomplete pass.

The Tigers seem to be dogs' team of choice. 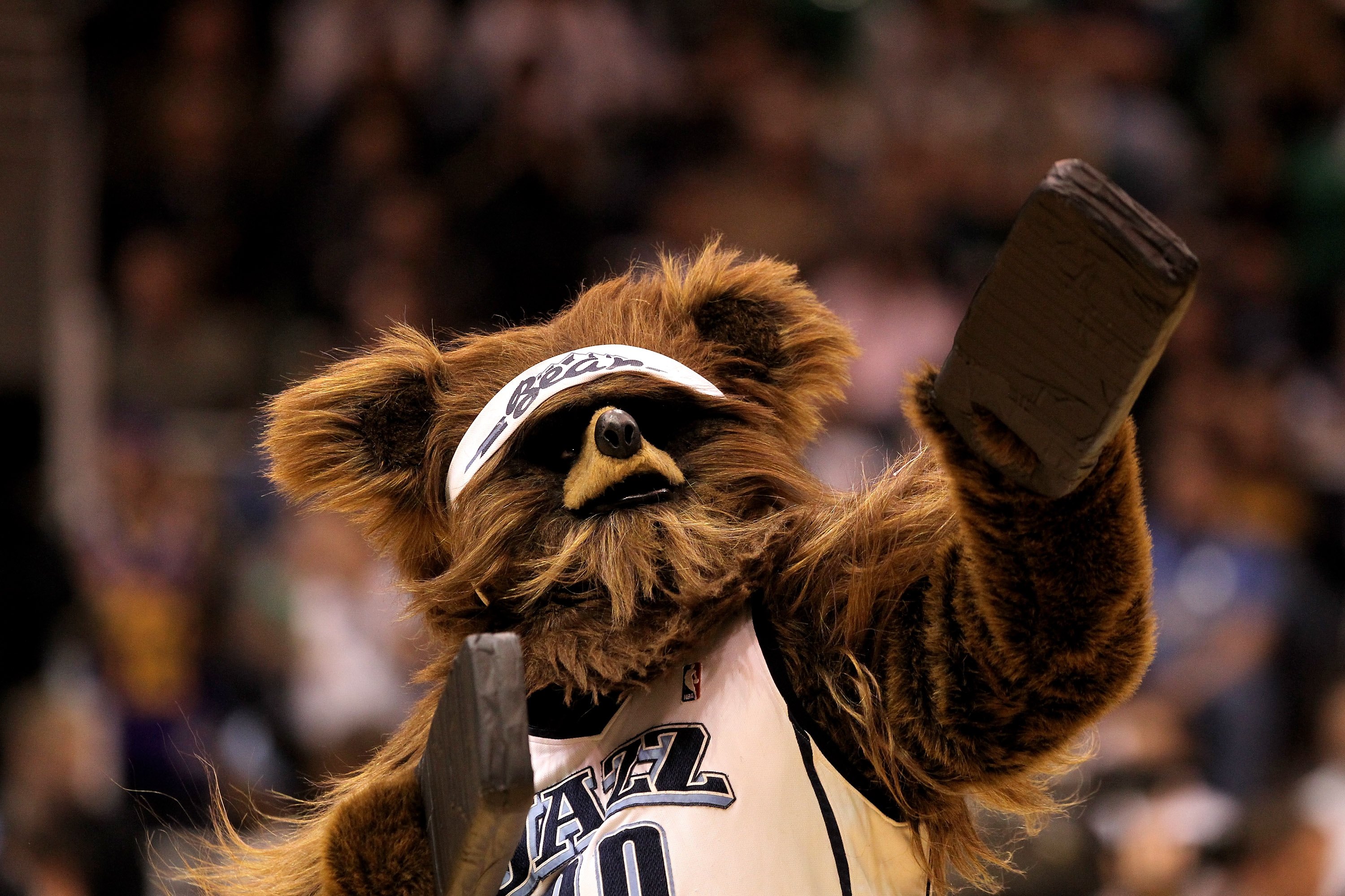 As a member of the Los Angeles Lakers, Jazz mascot Bear answered a fake call during a timeout that played over the loudspeakers.

The caller imitated Malone and complained about his time in L.A., but finished by saying things could be worse. "I could be Ko..."

The incident occurred around the time Kobe Bryant was suspected of rape and reportedly threatened the Mailman for hitting on his wife. 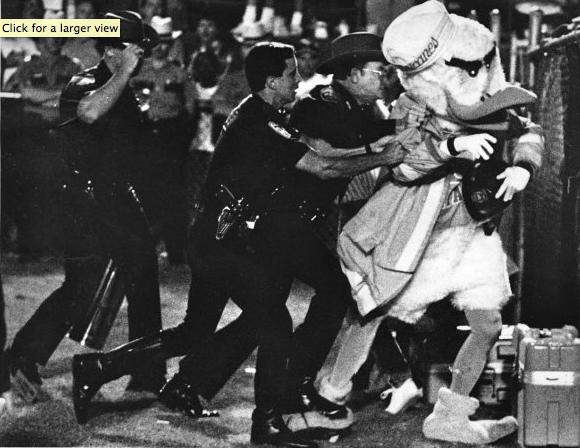 As bad as the University of Miami football team behaved in the 1980s, Sebastian the Ibis took care of business on the sidelines.

In 1989 against the rival Florida State Seminoles, Sebastian led the team onto the field with a fire extinguisher and firefighter costume.

Five police officers stopped him from dousing Chief Osceola's flaming spear at midfield. He was slammed into a wall and sent to jail.

Sebastian struck again at the 2001 Sugar Bowl against the rival Florida Gators when he ran onto the field and taunted the bench following a Hurricanes touchdown.