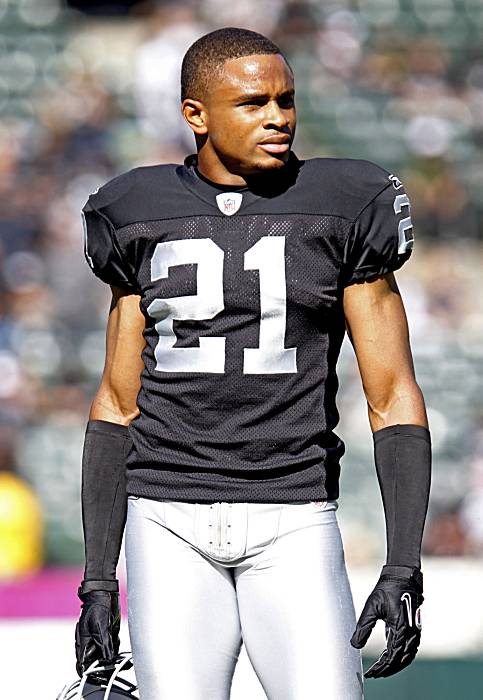 The NFL still hasn't reached a collective bargaining agreement, yet the Oakland Raiders have been active in resigning Richard Seymour. There are other Raiders that are in line to get new contracts as well, such as Nnamdi Asomugha, who is waiting to test the market.

The CBA is still uncertain, so things can change at any given moment. But as of right now, there is some inside information on who will stay, who will go, who is coming, and who is not.

The following is the direction the Raiders are looking to take with their personnel as of now.

Turn the page to see how it looks. 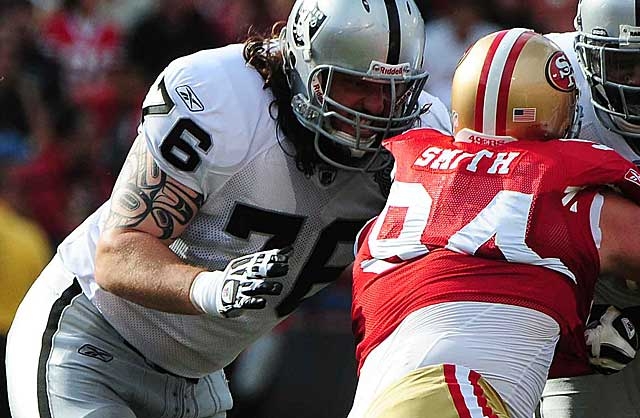 He became a decent guard for the last three years, but the man has been paid as a franchise left tackle. No matter how you cut it, he's a bust because that pick in the first round set the franchise back a few years.

Gallery has also spoken up about his displeasure over former Raider head coach Tom Cable's firing. This is a situation that really won't be difficult to resolve.

Gallery is reported to have an interest in following Cable and his zone scheme to Seattle. According to an inside source, Davis isn't going to try very hard to keep Gallery in Raider Nation.

That's okay, as he was proven replaceable in 2011. 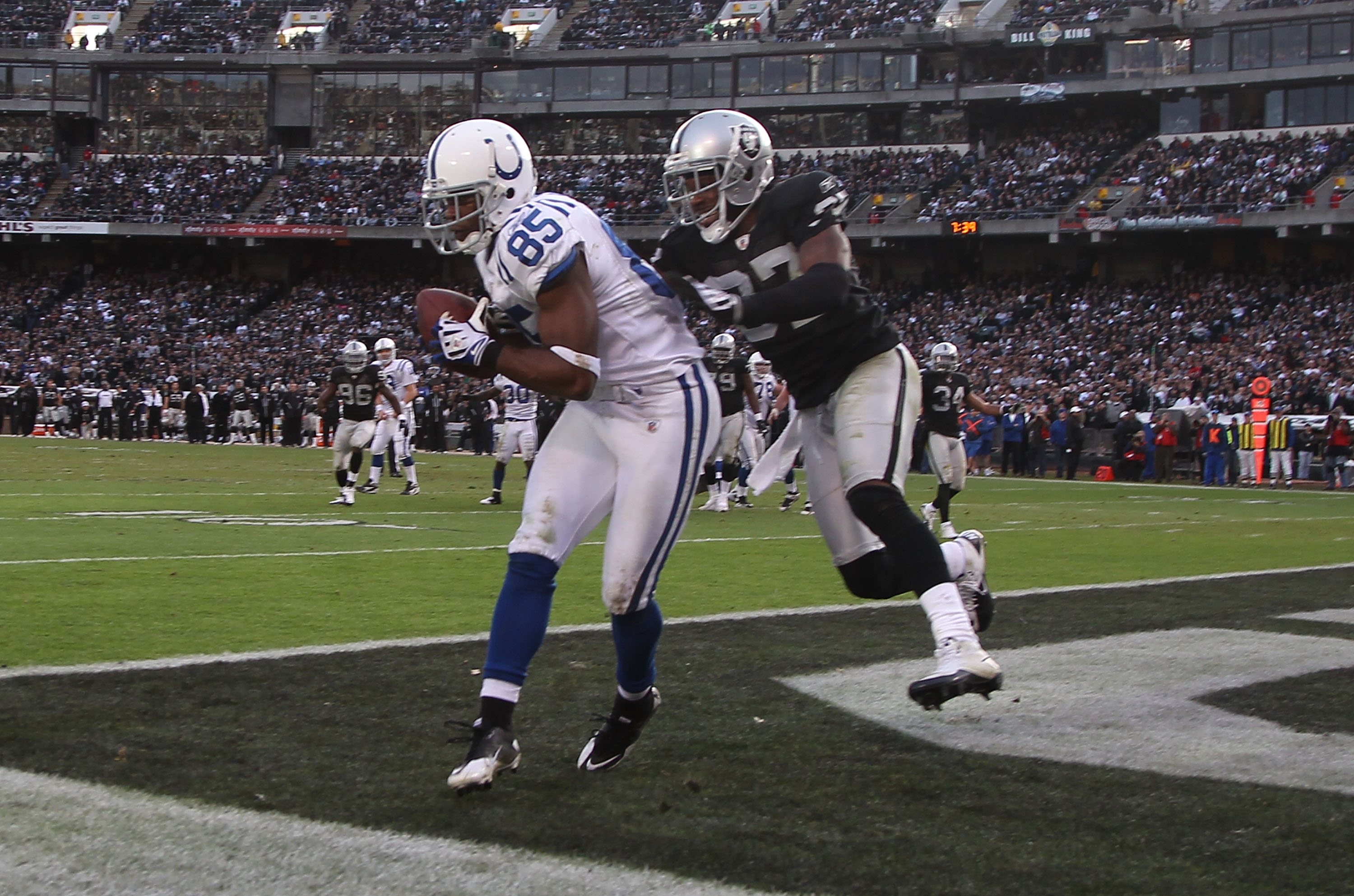 Chris Johnson has done next to nothing to show that he deserves what he's getting paid these days. It looks like that's another "my bad" on the part of Davis.

According to the same source, Johnson is going to be cut by the Raiders with the possibility of resigning him cheaper. Perhaps Davis' intention is to see what young corners Jeremy Ware and Walter McFadden can do.

Johnson's salary is a bit much for a man the gets beat for so many touchdowns. 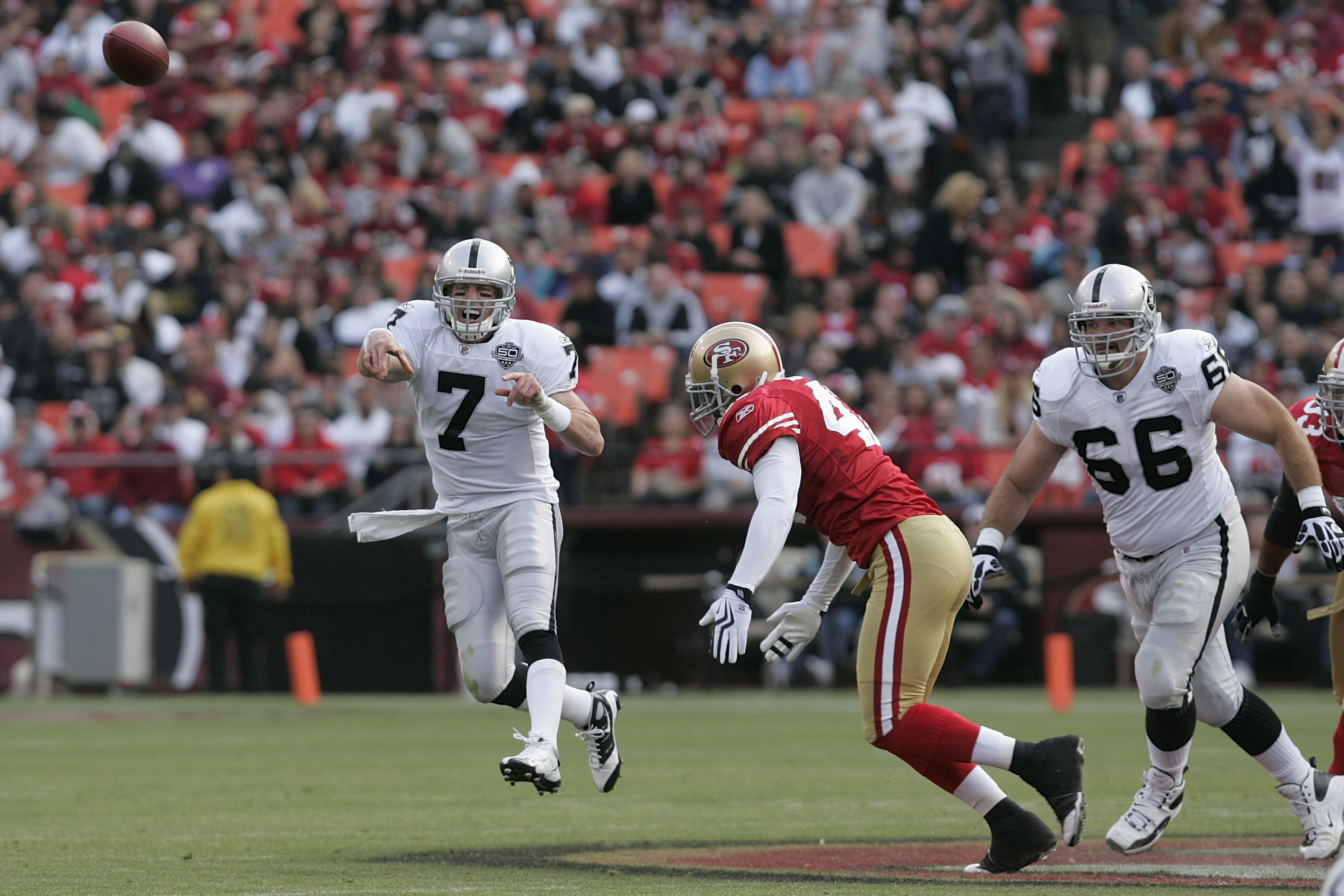 Cooper Carlisle was once a serviceable player for the Silver and Black. But he has since lost his last legs and can't get any movement on the line of scrimmage.

Jackson is looking to build a "bully" in Oakland.

It doesn't take an inside source to tell us Carlisle doesn't fit. 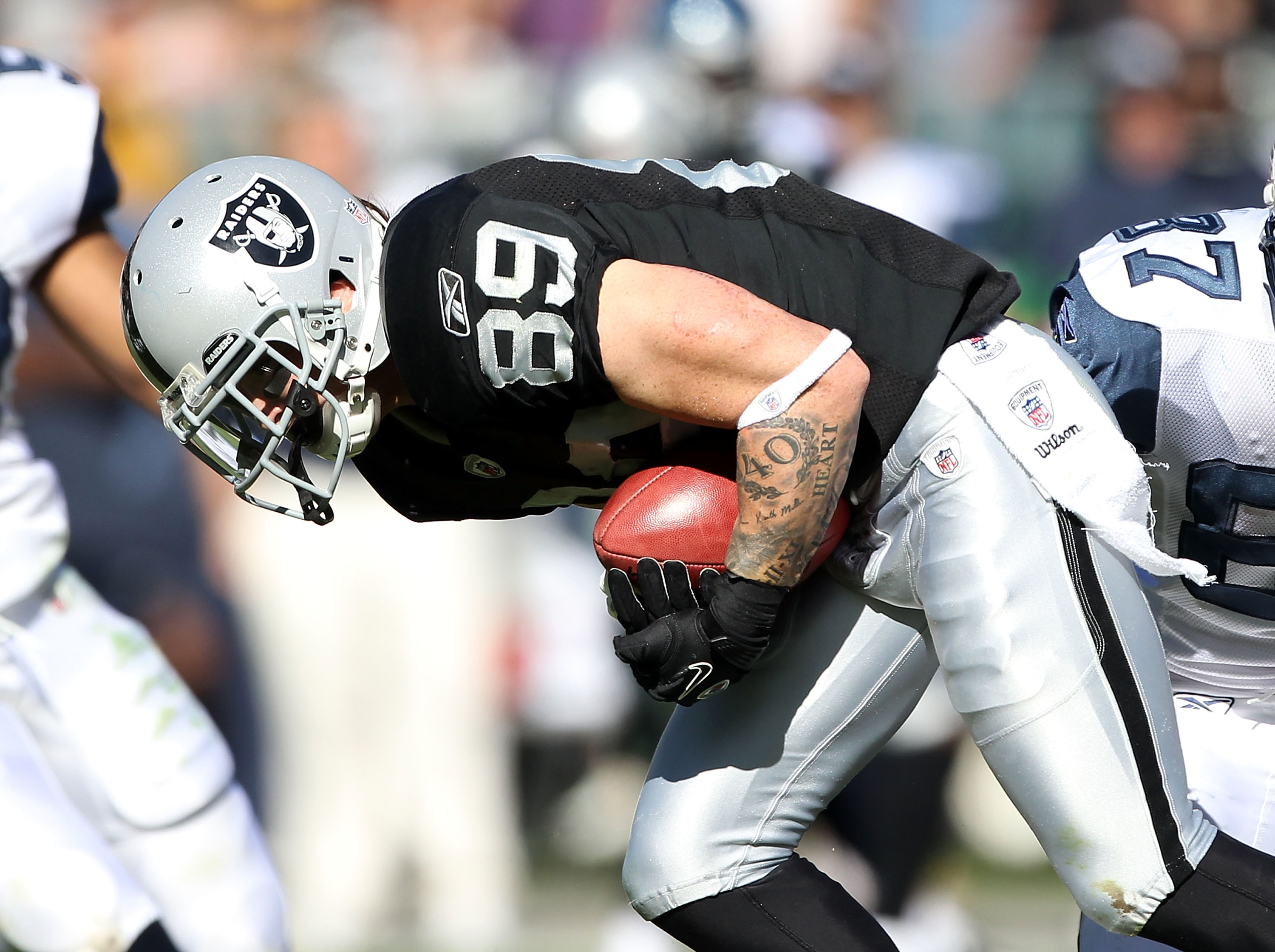 As of now, Davis isn't looking to bring Nick Miller back.

We can't really call that a surprise.

The Raiders had another not so good year of returning punts and that falls on Miller's shoulders. Davis is looking in the draft for a young man that can get the Raiders out of the bottom of the league in punt returns.

Deion Sanders, on NFL Network always says, "They only show special teams plays if it's a big play or a boo boo." The few times I saw Miller on NFL Network highlights, he was usually shown making a boo boo.

If only he knew when to fair catch and hold on to the football. 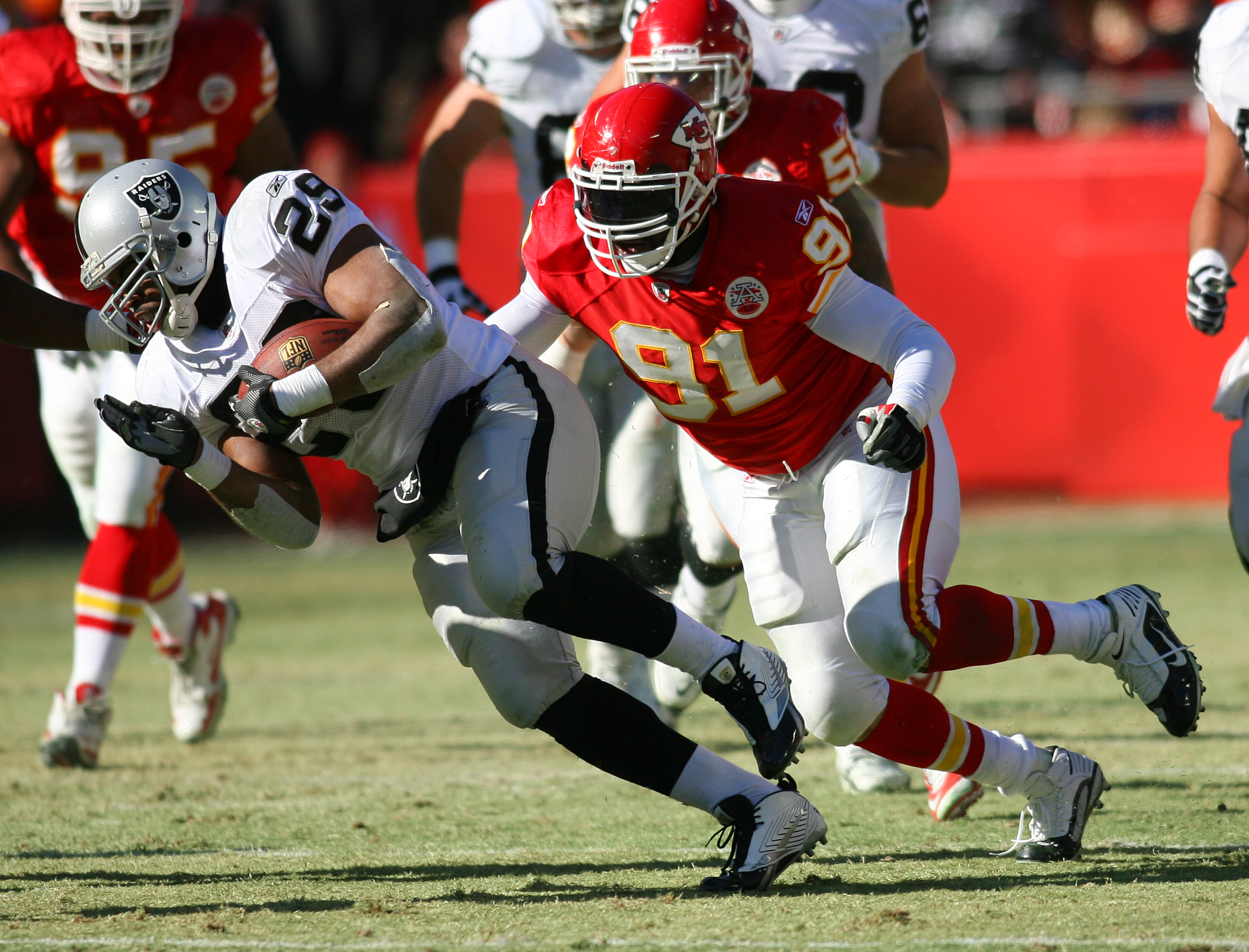 I originally thought that Michael Bush's DUI cost him enough in free agency for the Raiders to be able to keep him. But my source has said that Davis is unlikely to try and persuade Bush to stay in Raider Nation.

This is because the organization doesn't like his laziness.

They are fed up with Bush coming to camp out of shape and showing no work ethic. It's also frustrating to the staff to see Bush suddenly have to come out of the game while running the ball well.

I wonder if Davis has thought about LaRon McClain becoming a free agent and complaining about his lack of carries in Baltimore. My source has no knowledge of that situation, but McClain would make some good thunder to McFadden's lightning.

He's also the cousin of the Raider's starting middle linebacker. 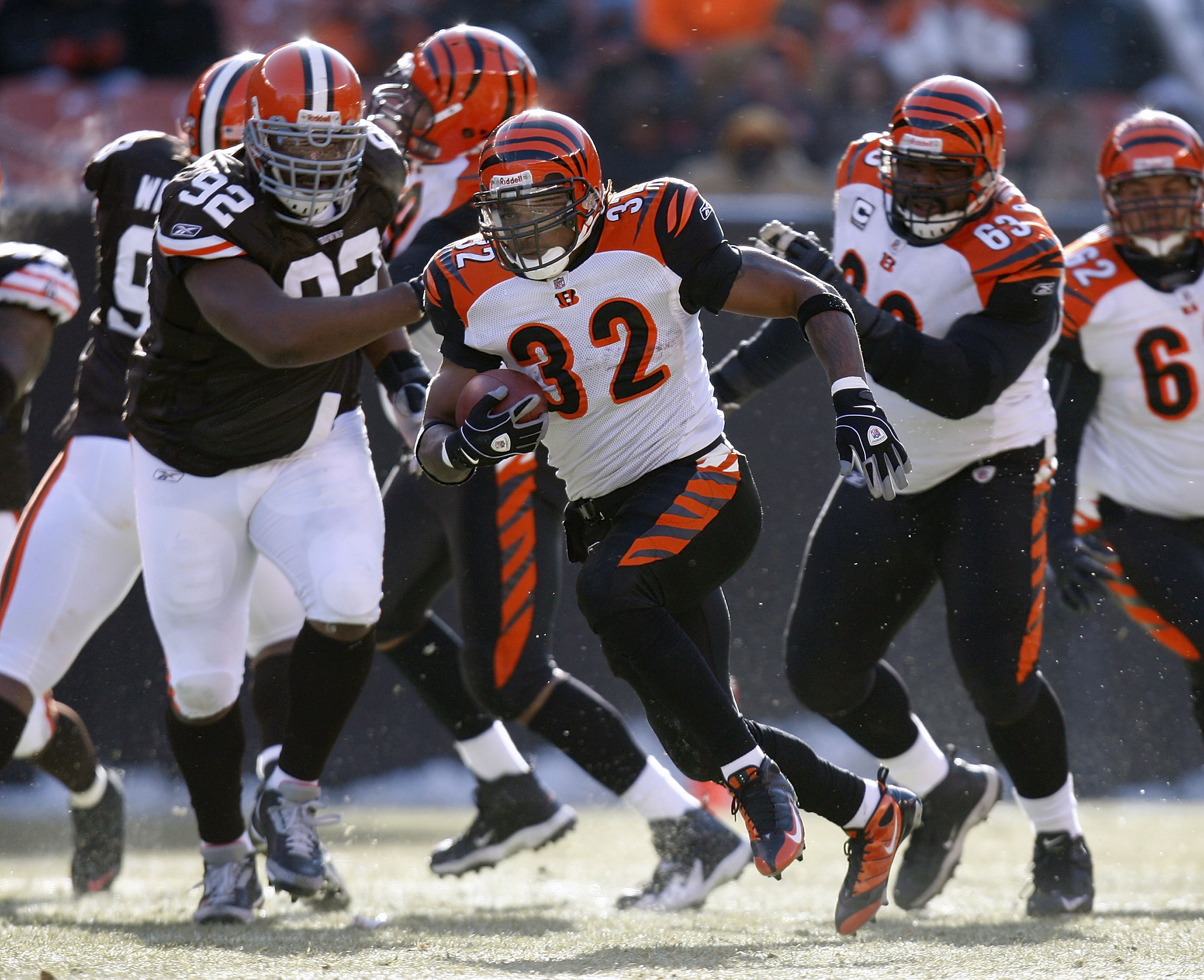 He has recently visited Buffalo since being released almost a couple of weeks ago. According to my inside source, Davis has some interest in the big fella to boost the Raider's run defense.

The move would lead Richard Seymour back to defensive end with Houston on the other end. Tommy Kelly would be paired with Rogers to man the interior defensive line for the Raiders.

The Raiders would hardly need linebackers to stop the run with this defensive line.

But the dollars have to make sense for this to work out. 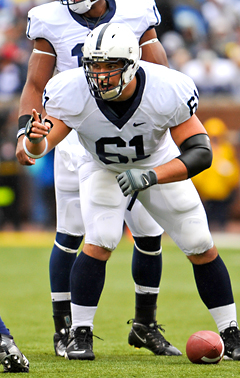 The Raiders need a center and Stefen Wisniewski is a good one coming out of this year's draft. The Raiders have hired his uncle and Raider legend Steve Wisniewski to help coach the offensive line.

My source has indicated that Davis has every intention of grabbing Wisniewski if it's at all possible. I'm sure Davis will make whatever maneuver necessary to get him in the second round.

Goodelle needs to send out a memo to the NFL owners that it's just better for the league if Wisniewski plays with the Raiders.

It sure would be better for the Raiders. 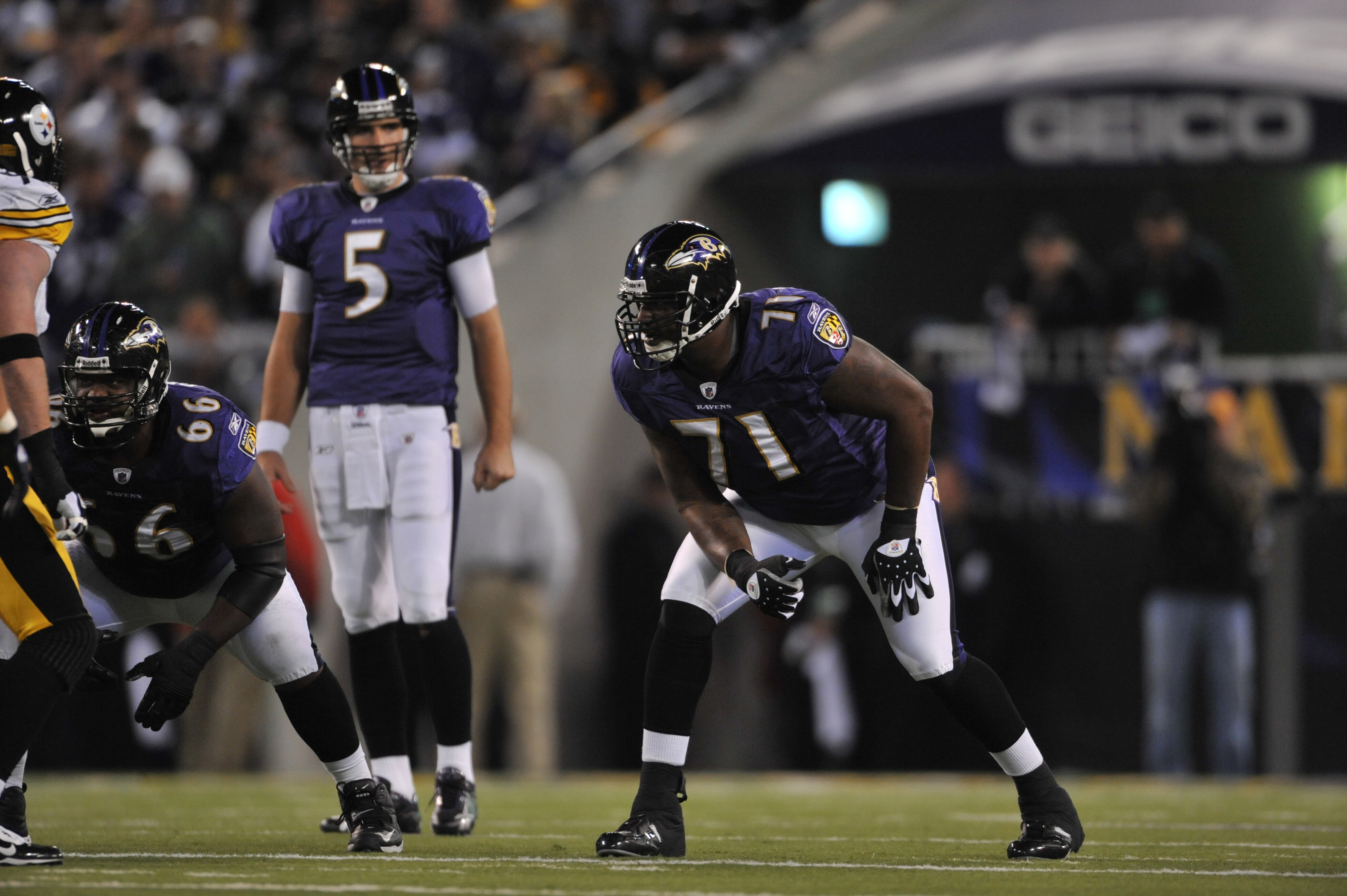 According to the source, Jared Gaither will not be coming to Raider Nation for 2011.

The Raider organization is in love with Jared Veldheer, and it really doesn't look like Baltimore is going to let Gaither out of town anyway.

I have been clamouring for Gaither for almost a year now and it just doesn't look like it will happen. As mentioned before, the organization blames their left tackle woes on the coaches more than the player.

Is this move a vote of confidence for Veldheer or knowledge that Gaither won't be let out of town?

Well there is a new offensive line coach. 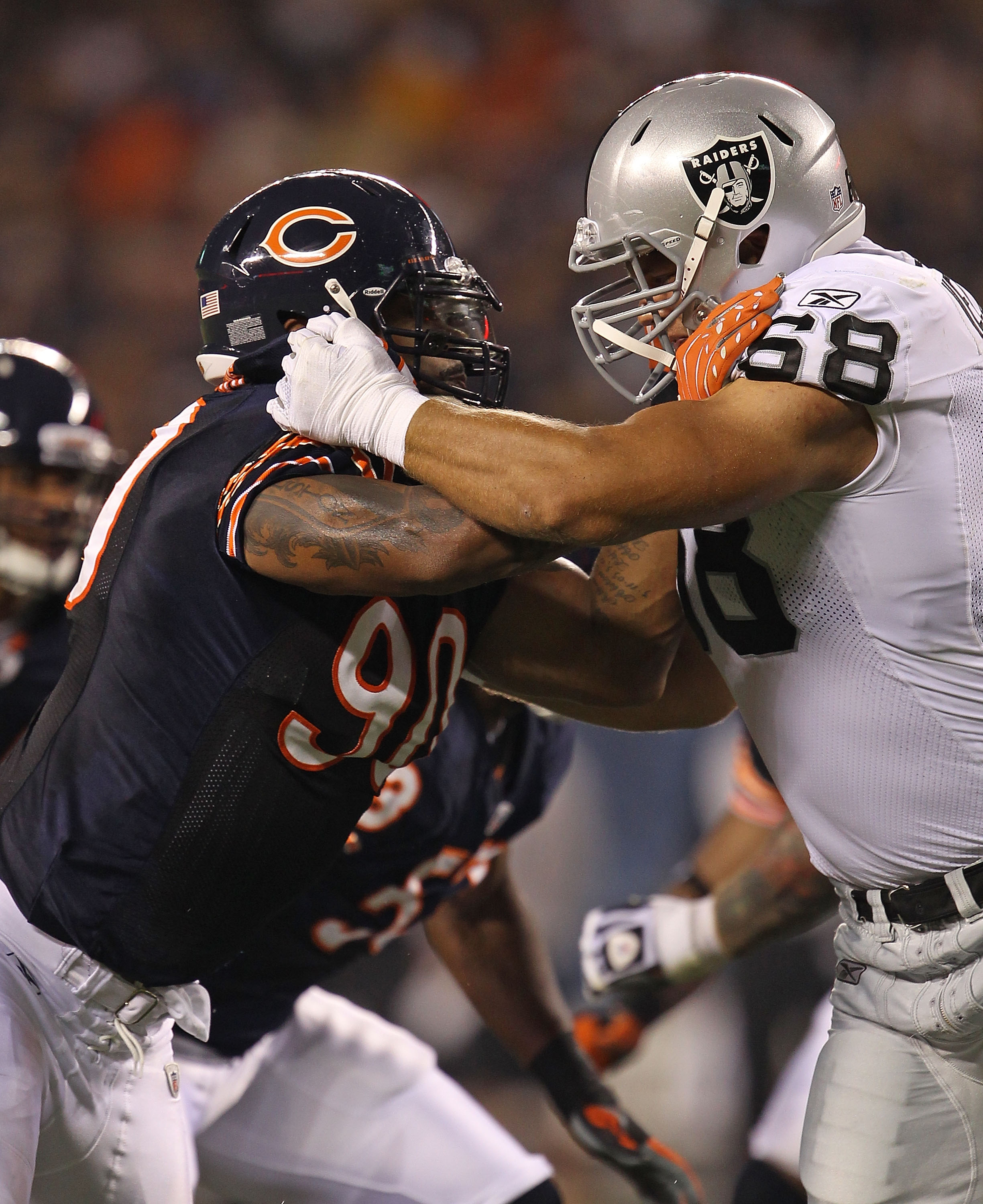 When I say Veldheer is staying put, I mean he is staying at left tackle. I don't know quite why but Davis and the organization love this kid and think he's the next great thing.

He really didn't play any better than Not So Super Mario Henderson did in 2009, but they attribute it to adjusting to the speed of the game. According to my inside source, they also attribute it to the coaching of Cable, as the organization believes Cable was worse as an offensive line coach than he was a head coach.

Right now, strength coach Brad Roll has Veldheer on the mother of all work out programs to get ready for 2011. Then there's the hiring of offensive line coach Bob Wylie to develop Veldheer's skill.

I thought Veldheer should switch positions but the organization wants him where he is. 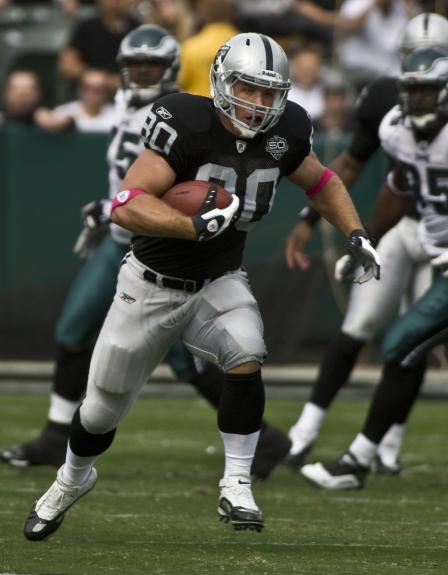 This one is as obvious as they come.

Seymour was signed to that huge contract recently and the Raiders can't put the tag on Nnamdi Asomugha anymore. This leaves Zach Miller as the man that fits the tag better than anyone at this time.

According to my source, the plan is to try to sign Miller long term, but Davis has the tag as a back up plan. I believe all of Raider Nation wishes for the announcement of a long term deal being reached.

But at least they won't lose the Pro Bowl tight end this year. 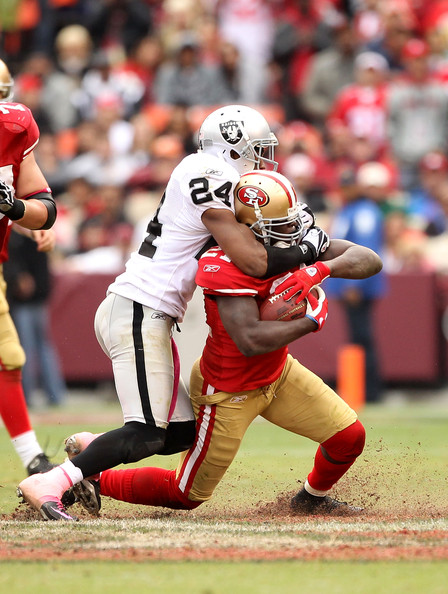 Michael Huff's tackling improved down the stretch of the 2010 season!

So it looks like he will be staying according to my inside source.

I believe this to be a good move due to his range, cover skills, and ball skills. I also don't believe that his first few years were his fault has he was foolishly moved into the box  as a strong safety.

But Huff broke through this and and showed signs that he can become a ball hawking, all over the place safety. He had 94 tackles, 4 sacks, three interceptions, and did a good job in man coverage in 2010.

Rod Woodson's arrival should also help as Huff is starting to get it. 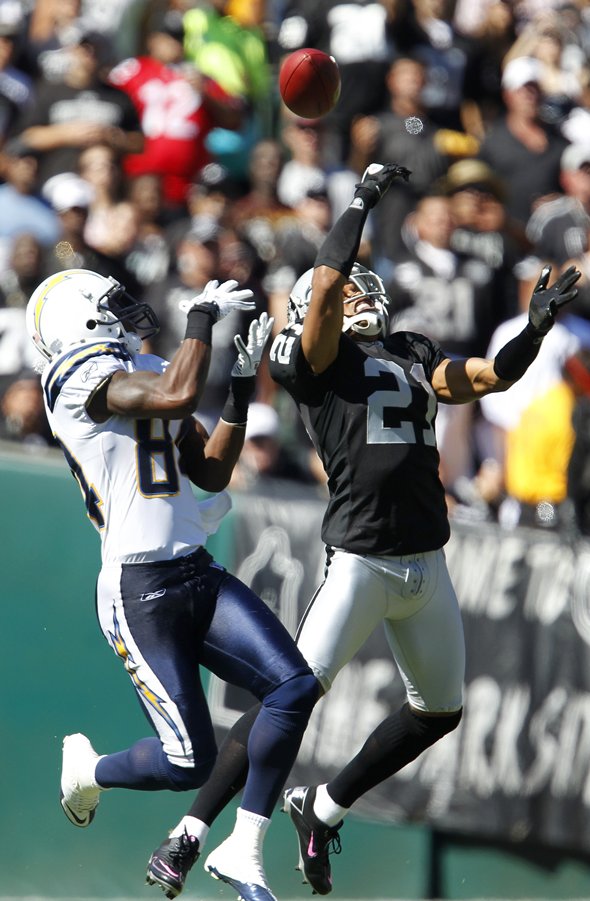 Davis does plan to make Nnamdi Asomugha the highest paid corner in the NFL. You never do know about a case like this because there are some good teams around the league who could benefit from a shut down corner.

Champ Bailey is headed back to Denver, so there is a wee bit more urgency to sign Asomugha. Davis loves his corners and probably still kicks himself over letting Charles Woodson go, so he won't let Asomugha go so easy.

According to my source, the organization feels good about this one as Asomugha has expressed his excitement about the direction of the team.

I remain cautiously optimistic about this one because it is up to Asomugha, and minds get changed when the right pitch and money is thrown. 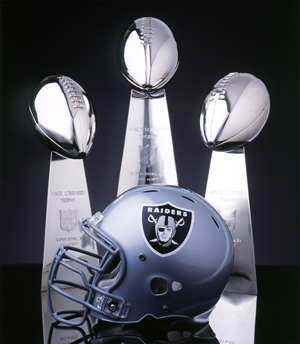 This article is speculation, as that's about all that can be done at this time because nothing is certain in the NFL right now. But I do have an inside source that has been right about everything to this point, so I went with him on this one.

But who knows how many times Davis has changed his mind to this point or how many more times he will change his mind. There are a few of these moves that I actually hope I'm wrong about as I have my wish list.

Right now is a crucial time for the Oakland Raiders.

They are but one more good offseason away from being a contender.

Is this one it?