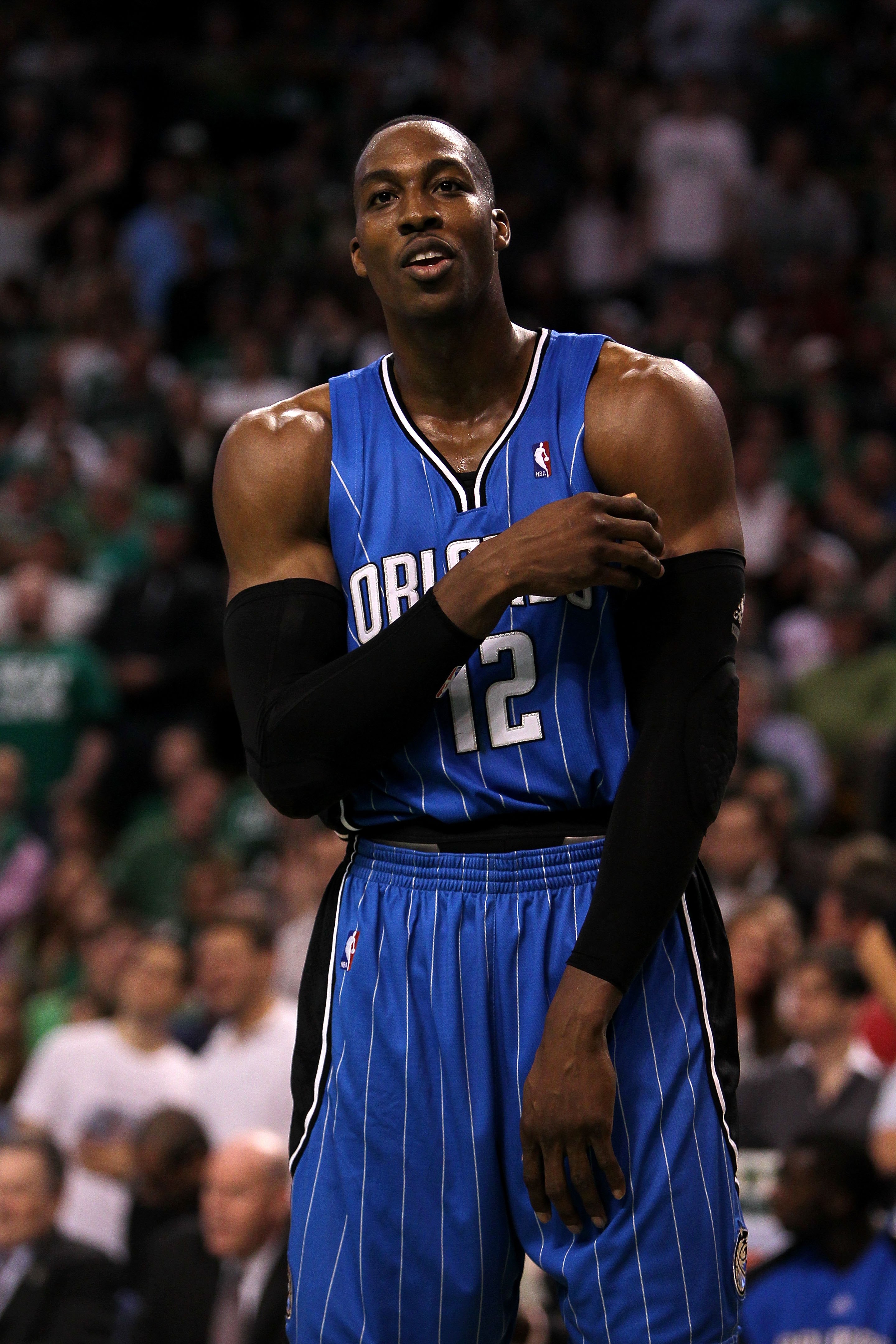 Defense. A lot of today's basketball youth overlook great defensive play; they all want to be an offensive juggernaut.

What history has shown us is that great defensive play usually leads to a deep postseason run. Teams like the San Antonio Spurs or the Boston Celtics have been to countless NBA Finals, and most of their appearances were powered by great defensive play.

The following list contains 10 of the NBA's best current defenders, as well as an honorable mention. 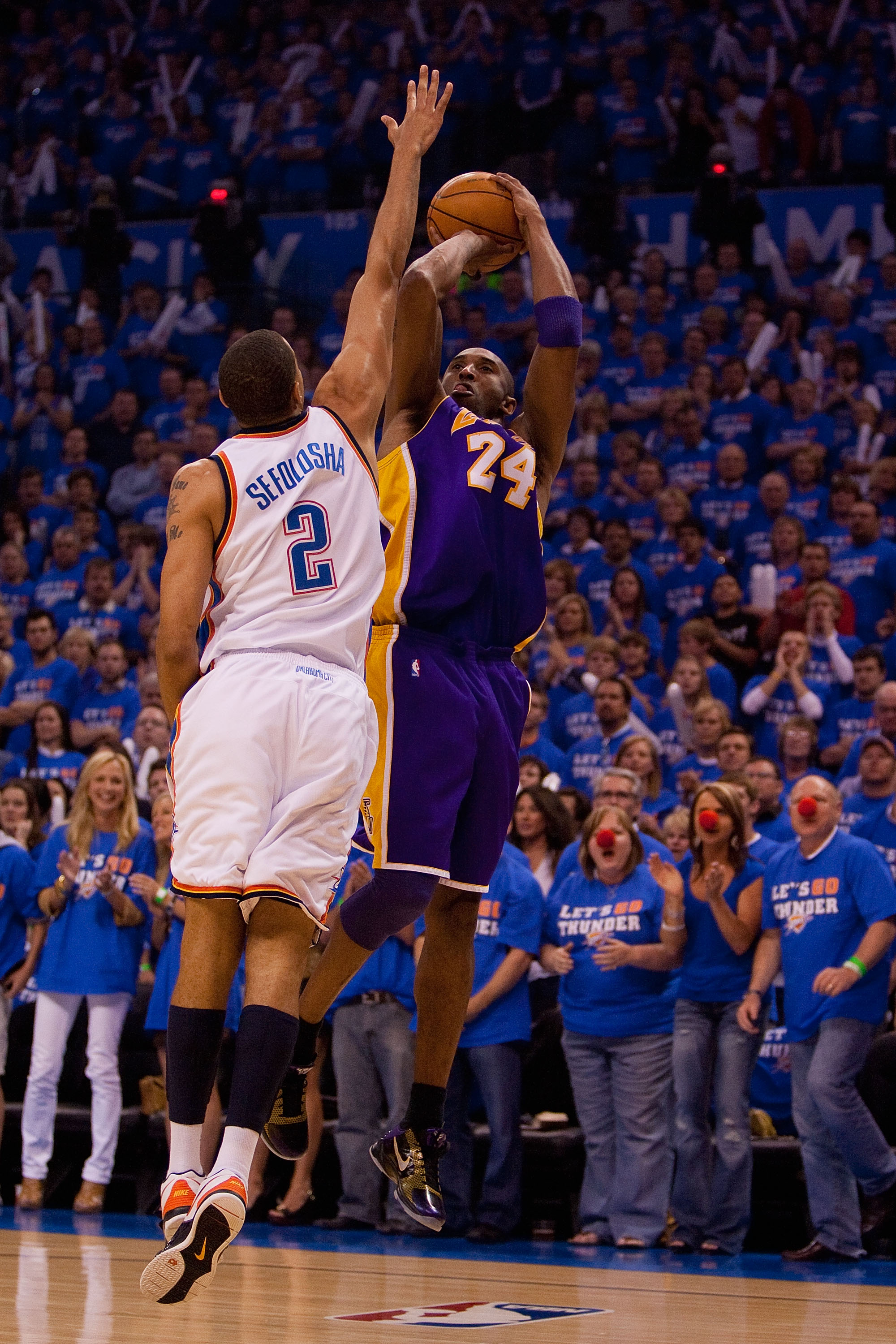 Stats never reflect the whole story. Such is the case with Thabo Sefolosha. The best defender on the young Thunder team, he played excellently against the Lakers in the first round of the playoffs, effectively containing Kobe Bryant for long periods at a time.

Sefolosha doesn't quite get the due he deserves; most of the credit goes to Kevin Durant or Russell Westbrook, but the Thunder would not have made playoffs with Sefolosha and his lock down defense, especially against the elite scorers. Durant certainly can't cover those guys, which is why Sefolosha is so important for Oklahoma City. 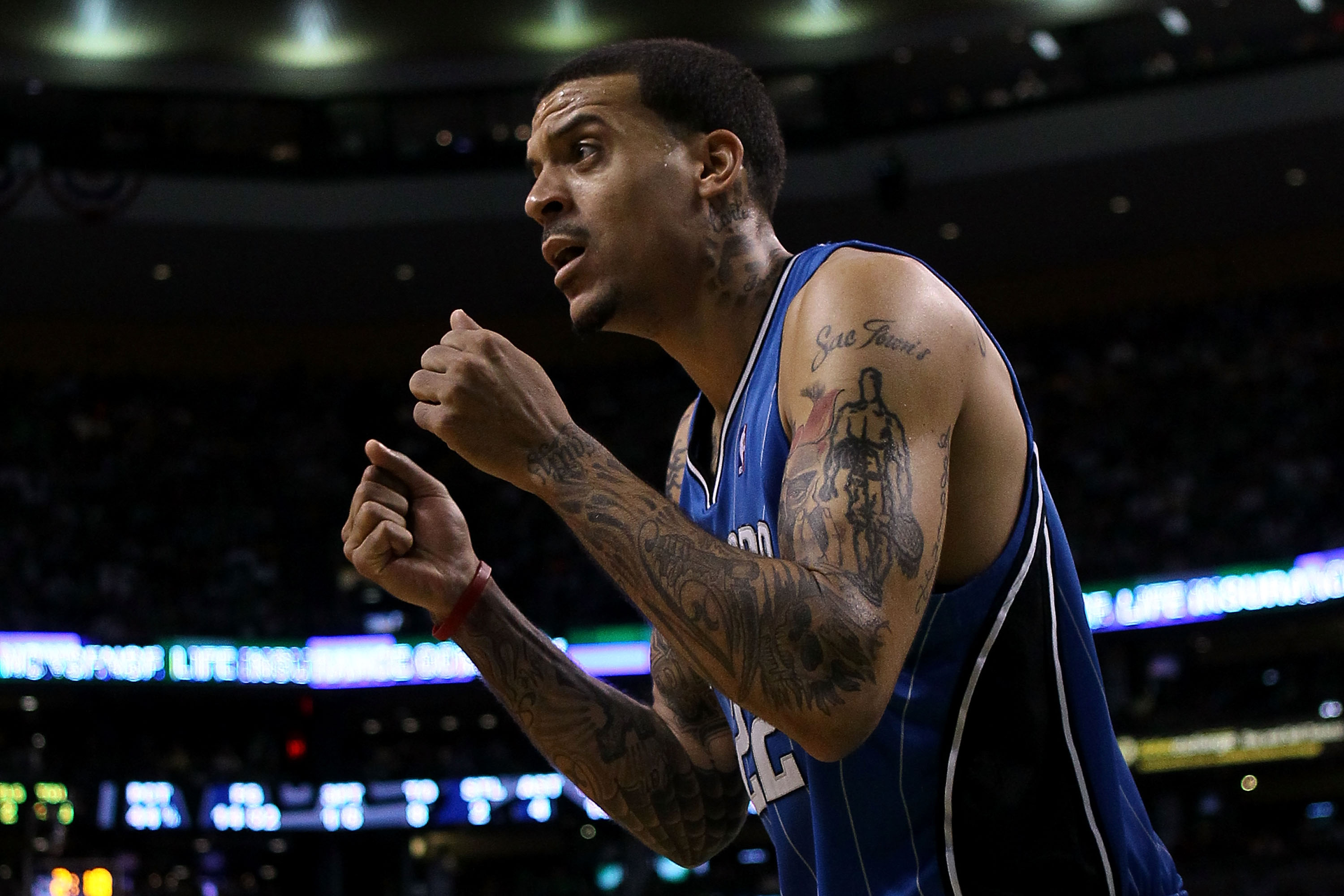 Matt Barnes is often overlooked as a lock down defender. Great defenders, like Barnes, are emotional and very prideful. Barnes' career up until this point has been based on defensive mastery.

While he is rather undisciplined at times, he certainly can stand his ground defensively. He showed that much when he kept Gerald Wallace to 17 PPG in the playoffs on 40% shooting, and when put on Stephen Jackson, Barnes kept him to under 36% shooting.

He is prone to getting burned sometimes when he gambles, and he has a tougher time stopping heavier opponents with good outside shooting, like Paul Pierce. Even so, he's a defensive mastermind and has improved throughout the years. 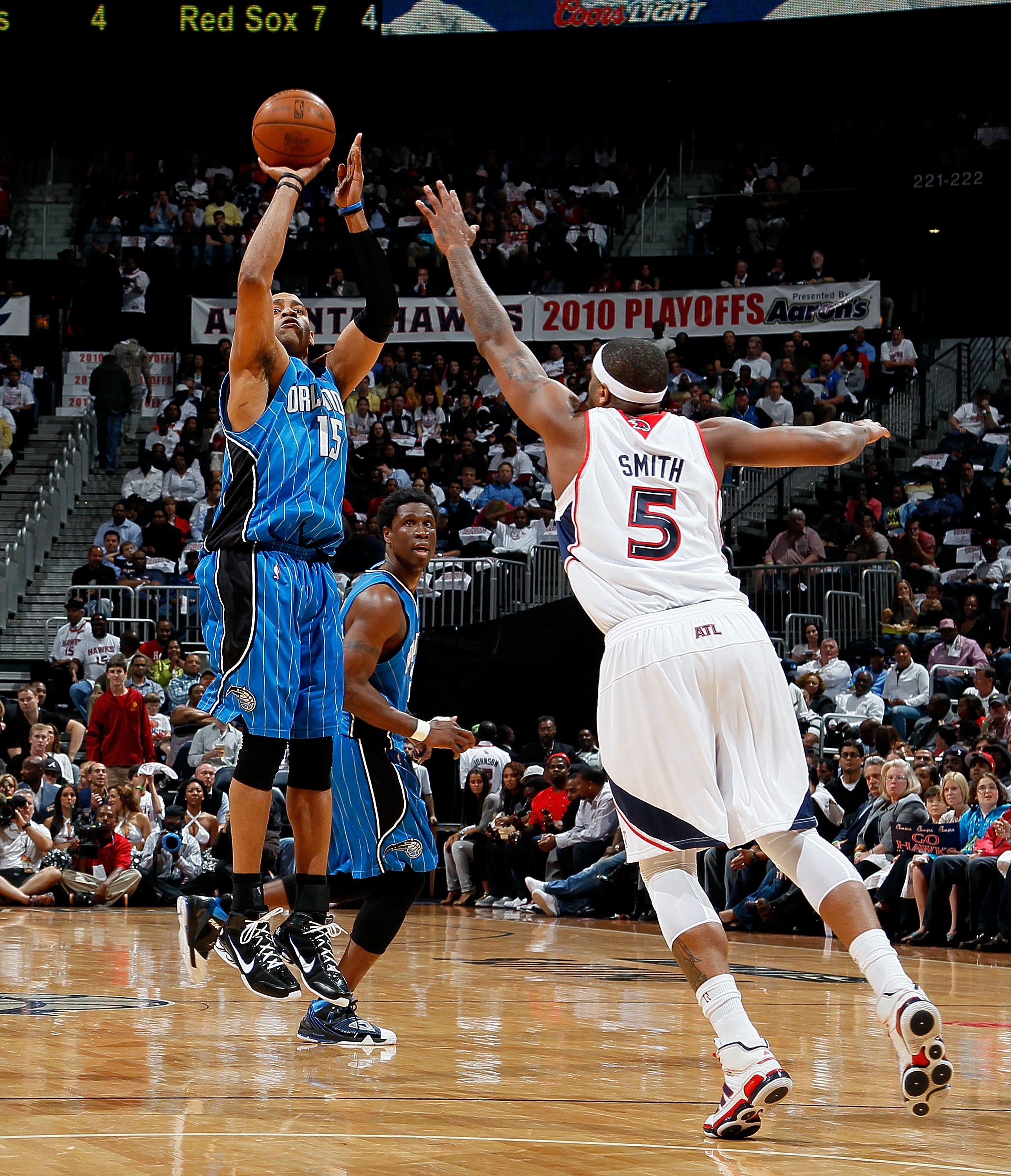 Josh Smith is a wildly athletic player, good offensively and even better defensively.

Smith is, admittedly, only a decent man-to-man defender, but boy can he block shots! He blocked 2.1 shots a game, as well as pulling in around nine rebounds a game, six of those being defensive rebounds.

He's showed what he can do at the NBA level, and the Hawks would have lost a few more games without his shot blocking. He corrects the mistakes that guys like Joe Johnson and Jamal Crawford make on the defensive end. 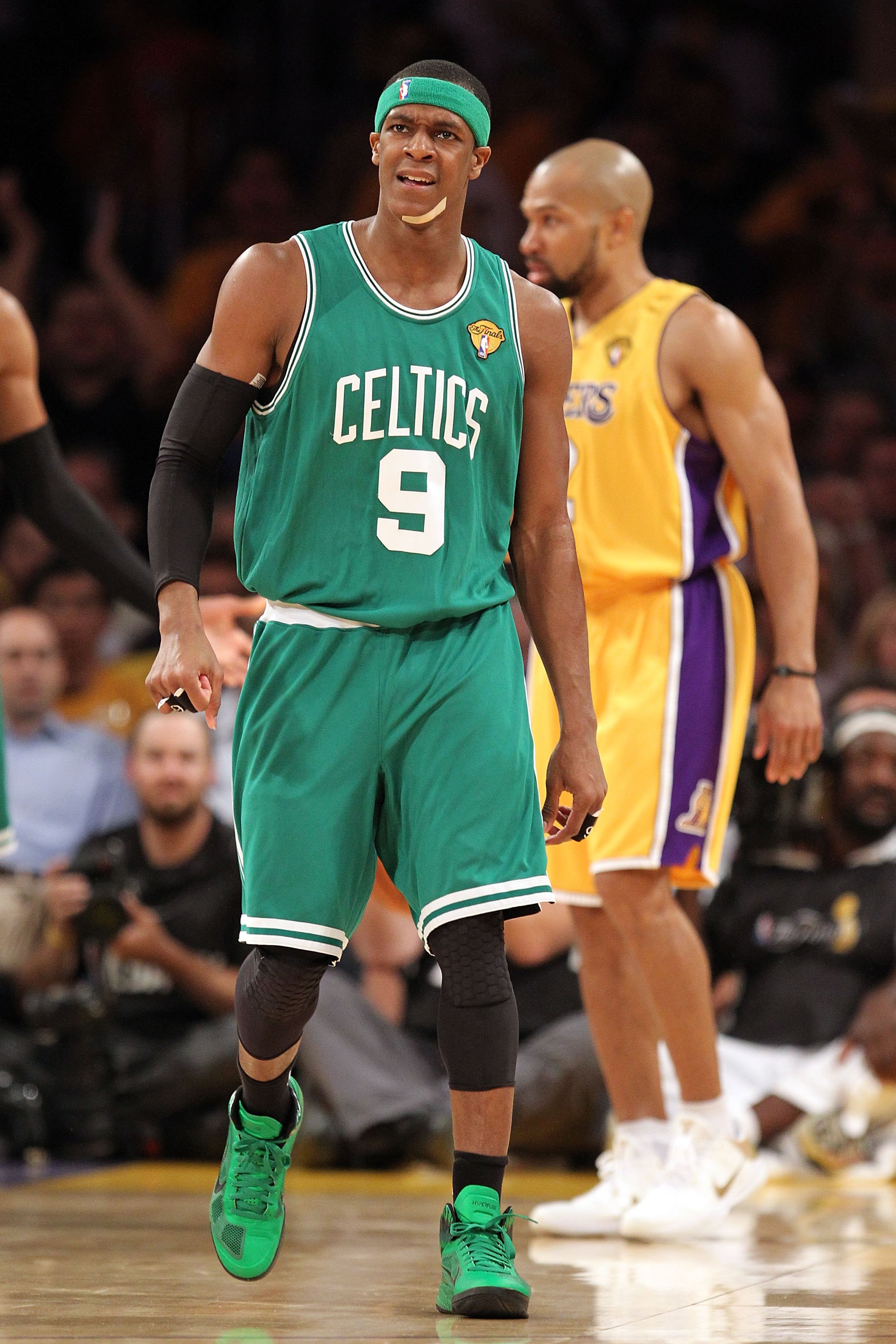 The fearless point guard of the Boston Celtics initially started his career off of his defensive play, since he was an atrocious offensive player in his earlier years. Now, he's a much more all-around player and even better on the defensive end.

He very well could be the fastest player in the NBA, and he probably is the best defensive point guard in the league. Rondo certainly can stay in front of his man. It's his defensive play that helps keep Kevin Garnett's knees intact, since his man isn't penetrating that often and forcing Garnett to try to block his shot. Rondo also does a great job of getting into the passing lanes for steals.

The Celtics definitely wouldn't be the defensive juggernauts they are today without him, and he's only getting better. 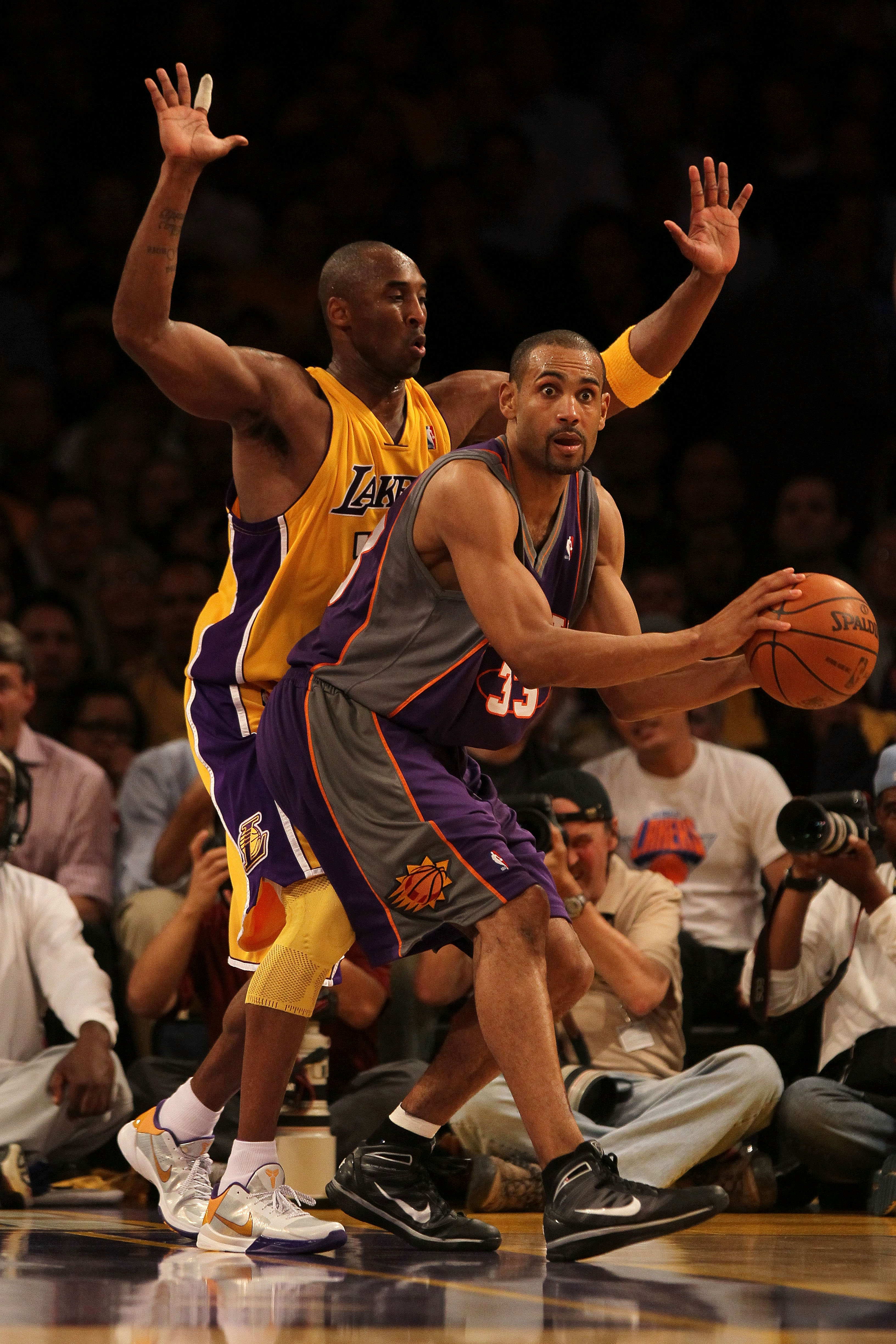 Kobe Bryant has been a premier defender in the league for well over 10 years. That's because of all the hard work he puts in to becoming better each and every day.

Bryant has been on 10 All-Defensive Teams (eight First teams, two Second teams) and is always smart in his defensive approach.

Bryant is capable of locking down his man whenever the Lakers need it the most. The reason Bryant isn't ranked higher is because he tends to play Free Safety on the defensive side. Sometimes, it can be a good thing, leading to steals, and fast breaks. Other times, he's guarding a guy like Ray Allen or Paul Pierce. And we all know what happens when they shoot wide open. 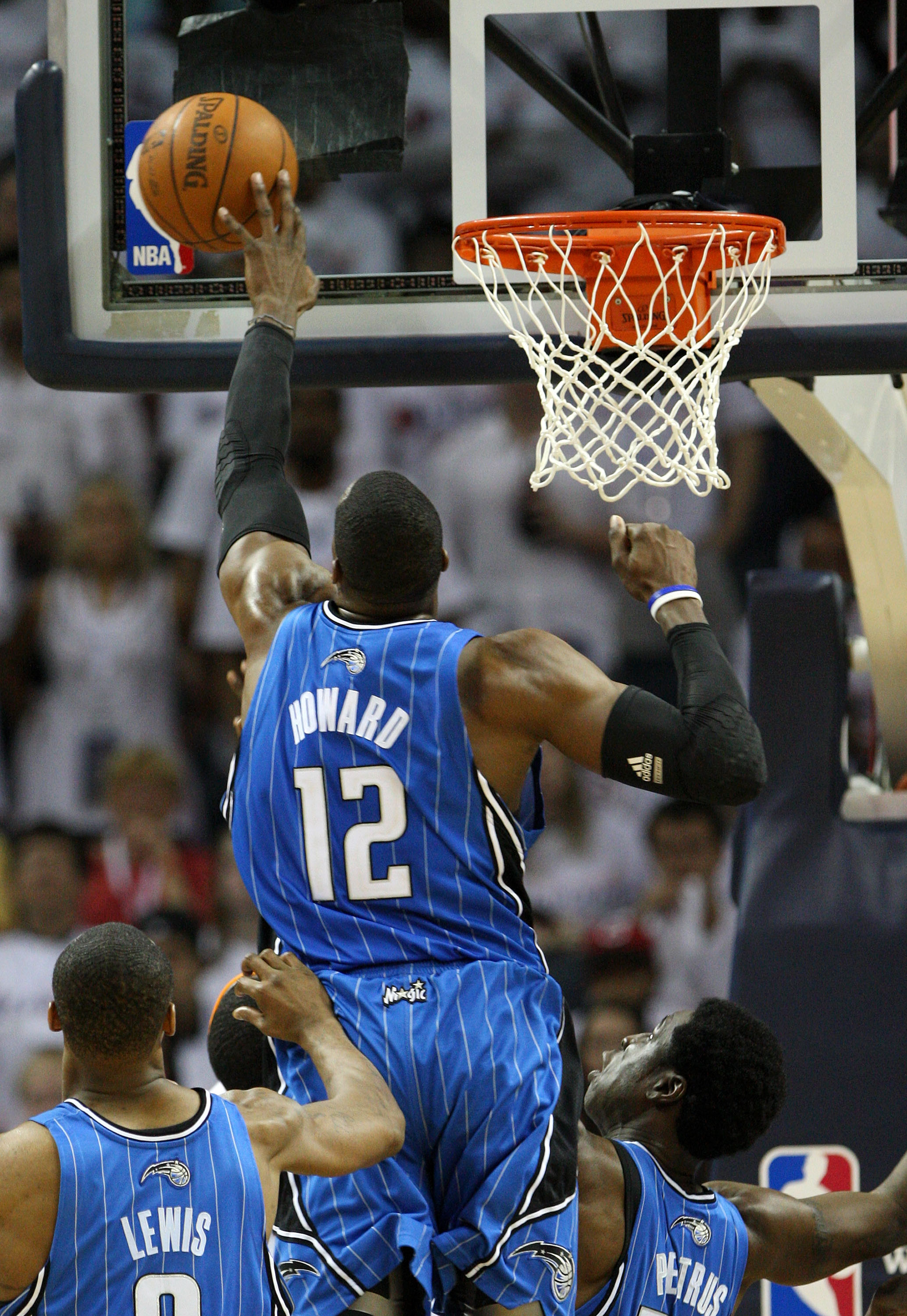 D-12 is a defensive machine! Though his offense is rather rough around the edges, thank goodness for his defensive game!

His man-to-man is average and only because he likes to hunt down blocks, so he'll sag off his man sometimes. This scheme does usually lead to a block though. He has led the league in blocks for the past two years, as well as defensive rebounds, and has won the Defensive Player of the Year award two years straight.

The Magic would be nothing without him on the defensive end. He cleans up a lot of mistakes that his perimeter defenders commit, and he's a rebounding machine. The only reason that he's not ranked higher is because, although he doesn't get burned too often, the players he sags off of are really nothing special. Most of them are average or below average, with a few exceptions. 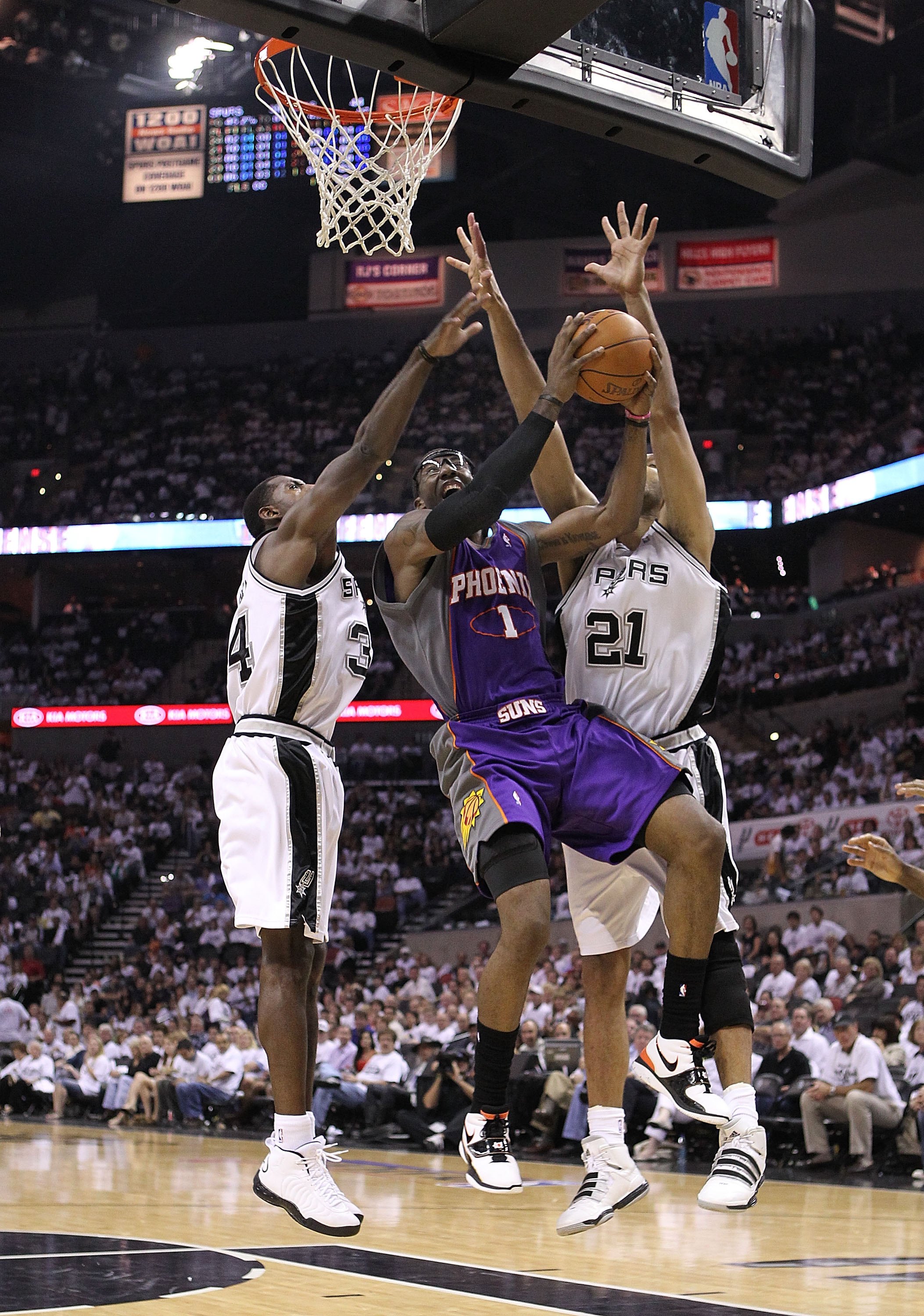 The Big Fundamental has been the anchor to the Spurs' defense for the past 12 years. And rightfully so, he's a defensive guru.

He's the opposite of Dwight Howard; he plays great man-to-man defense and only swats occasional shots. In my opinion, Duncan's style is better, especially for the Spurs, considering they have better man-to-man defenders on the outside than the Magic.

Duncan is most certainly a future Hall of Famer, and even at this stage of his career, he's still a good-to-great defending big man. 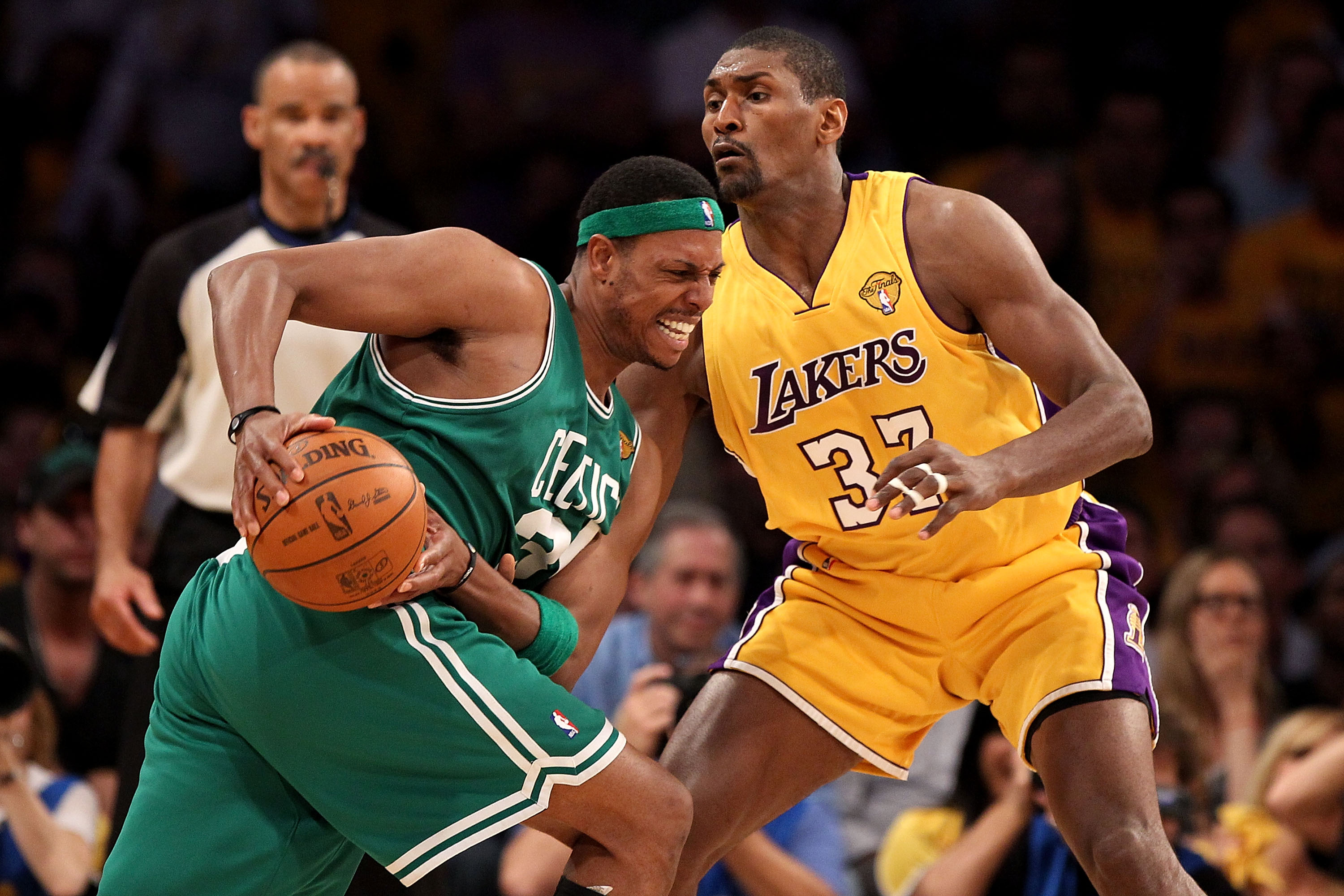 Ron Artest would have been No. 1 around three years ago. While he may have lost some lateral quickness, he has gained some muscle, and a little more brains in his approach.

Artest can harass nearly anybody in the league, and he can stay in their faces and get into their minds. He's that good.

Nowadays though, quicker opponents can blow by him easier than before, but slower, more methodical opponents will get stopped by Artest.

Just look at Paul Pierce; Artest kept him to under 37% shooting for the whole NBA Finals. Ron Ron also keep Durant to well below his shooting average, nearly 40%, and six points under his regular season scoring.

Artest has shown that he is this decade's Dennis Rodman, minus the rebounding. 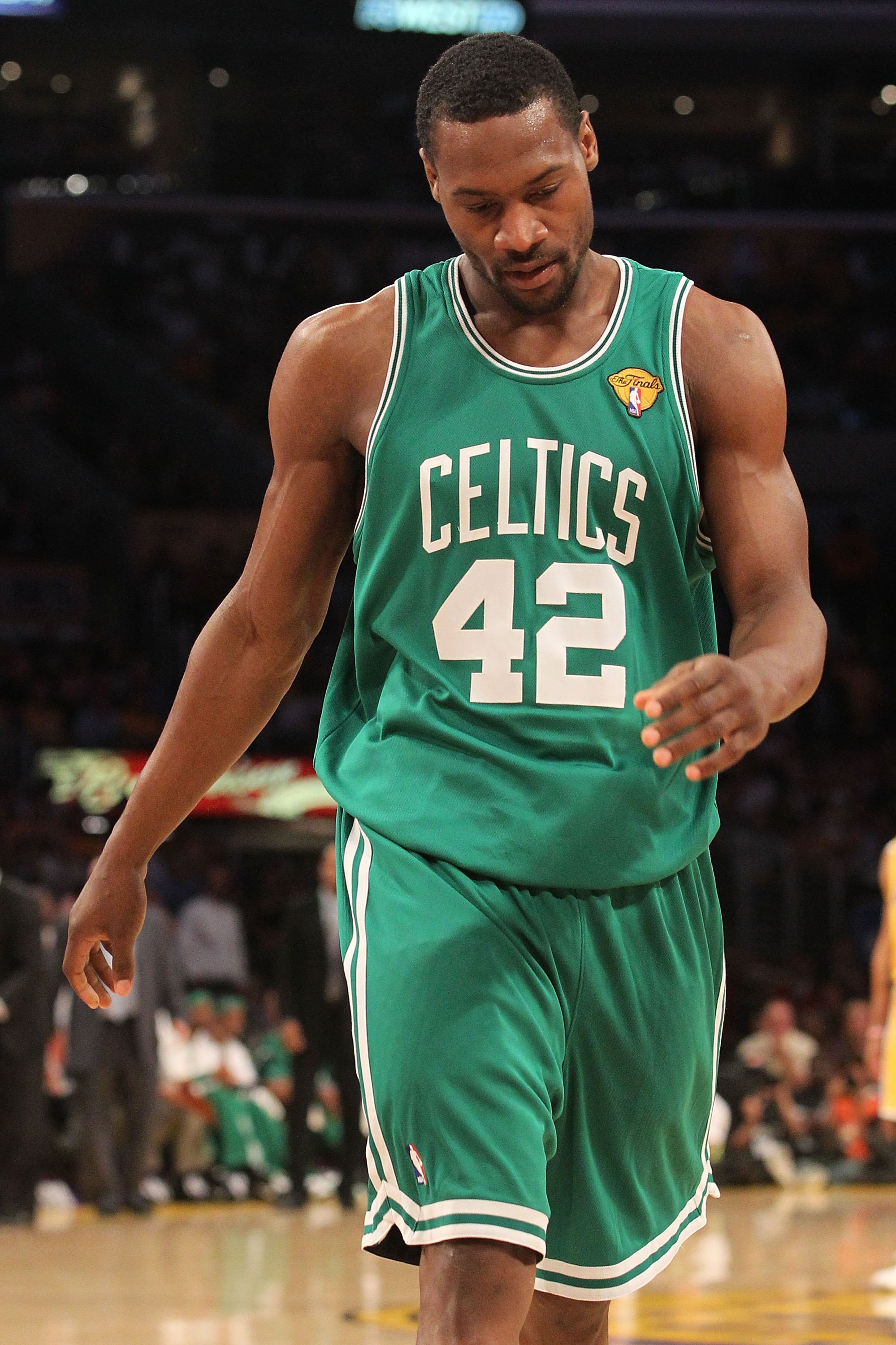 Tony Allen has been absolutely essential for the Boston Celtics and with great reason: this guy can flat out defend!

Be it blocking shots, thanks in part to his great athleticism, or just sticking with his man, there are few who can guard better than him.

He might have had the toughest job in the NBA during the playoffs; these are the guys he had to stop or contain: Dwyane Wade, LeBron James, Vince Carter, and Kobe Bryant. That's three of the best players and one that's certainly no slouch on offense.

While he's not perfect, he executed his job fairly well. He only had a few mistakes against those four, the worst coming by James and Bryant. But he still managed to shut down James in the decisive Game 5. He managed to keep Bryant in check for most of the Finals, and he completely shut down Vince Carter.

The Celtics wouldn't be the same team without him 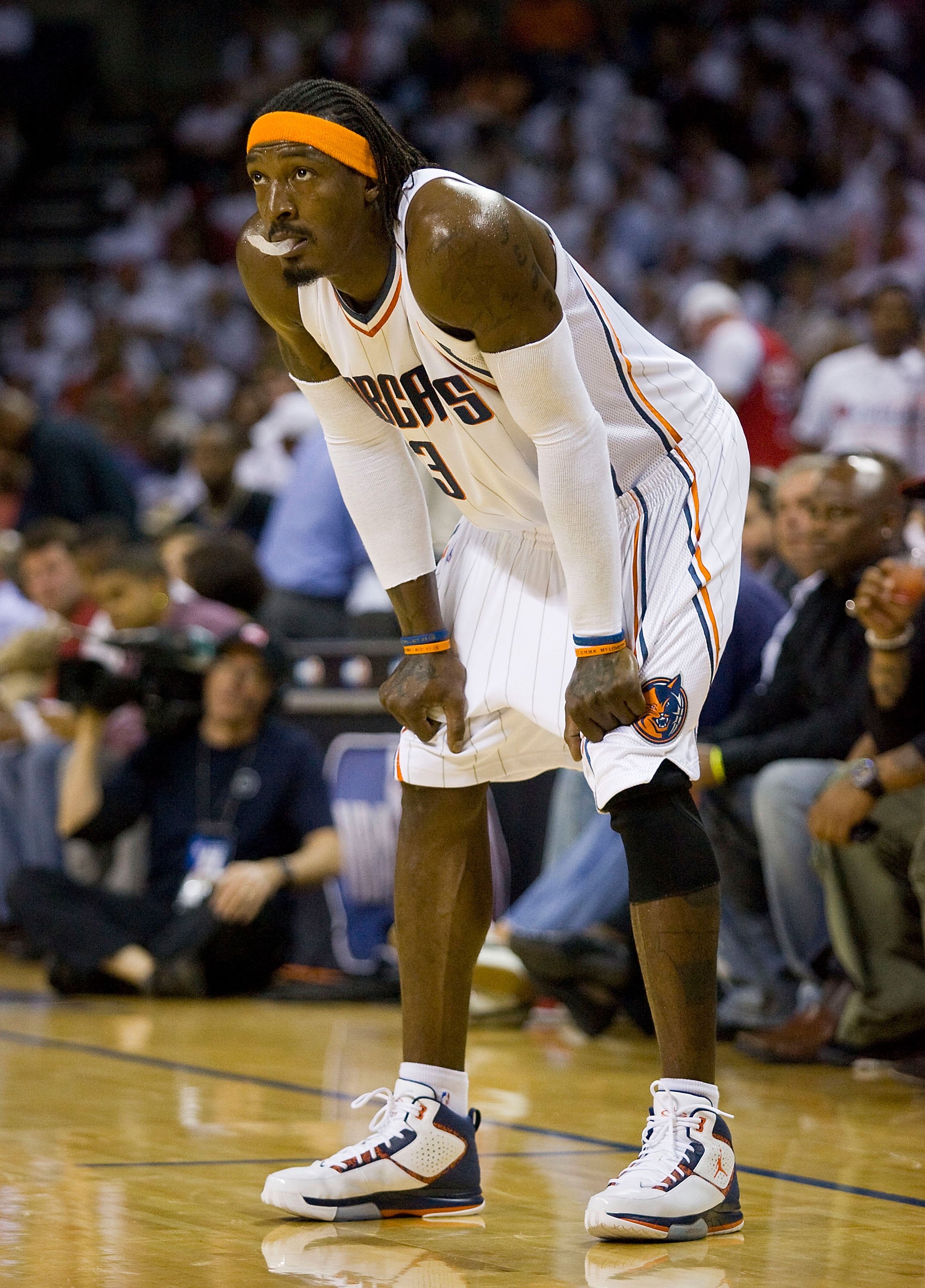 Gerald Wallace has to be the most underrated player in the NBA right now.

Most people don't really know about him because he plays in Charlotte, but this guy can play.

He is currently the Bobcat's best perimeter defender, and under Larry Brown, has improved vastly in that aspect.

He's very athletic and can prove problematic for the opposition's best scorer, mainly because you can't blow by him, and you can't muscle him down.

He has averaged over a block for his whole career. He has the ability to harass anybody on the defensive end, and, most surprising of all, he can rebound like a center. Last year, he averaged exactly 10.0 rebounds at the Small Forward position (8.1 of those were defensive rebounds).

Wallace certainly can defend with the best of them; the Bobcats have to be counting their blessings for having him. 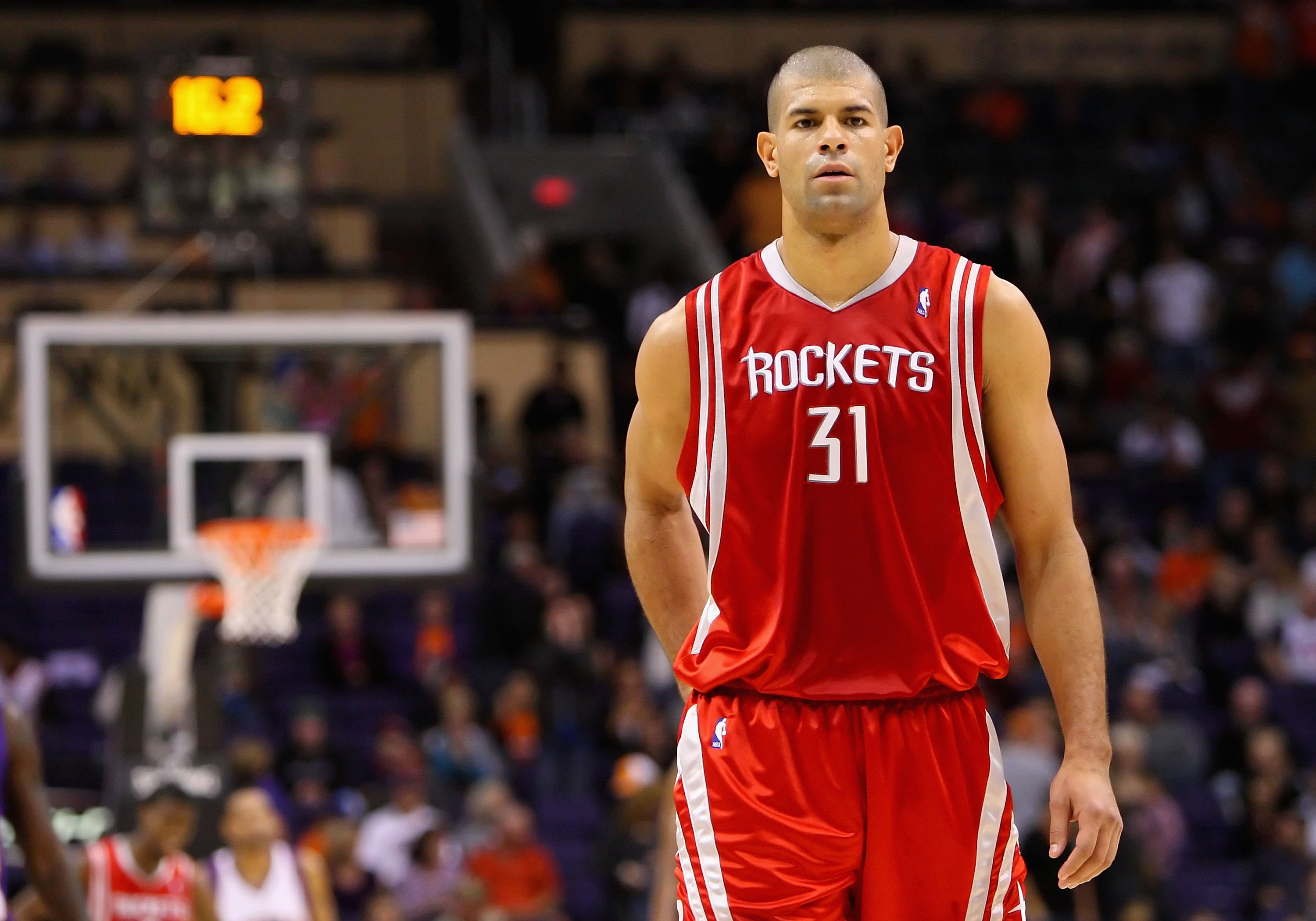 Shane Battier is often overlooked when talking about great defensive players. But the truth is, he's is the NBA's best man-to-man defender, and the way he does it is "the right way" of doing it.

Battier is probably the smartest player in the NBA right now. He's big, yet quick, he can stay with anybody, and he can cover them better than anybody else. Just ask guys like Kobe Bryant, LeBron James, and Dwyane Wade. When they come to Houston, they almost never shoot more than 35% with Battier on them.

He knows all of the star's favorite moves; he has said that he studies a ton of film before going up against the other teams best scorers. He knows Kobe Bryant's pump fakes and post moves as well as Dwyane Wade's cross over. Why? Because he is constantly studying film.

He's another one of those cases where stats certainly don't tell the whole story. He has never led or been close to the top in steals, blocks, or defensive rebounds, but he has always been one of the top, if not the best, man-to-man defender. That's what separates him from guys like Chris Paul or LeBron James. Paul is suspect in man-to-man, and he gambles a lot. James is above average in man-to-man, and he sags off his man too much to get blocks. Battier, on the other hand, is easily the best man-to-man defender in the NBA, as well as the smartest player in the NBA. 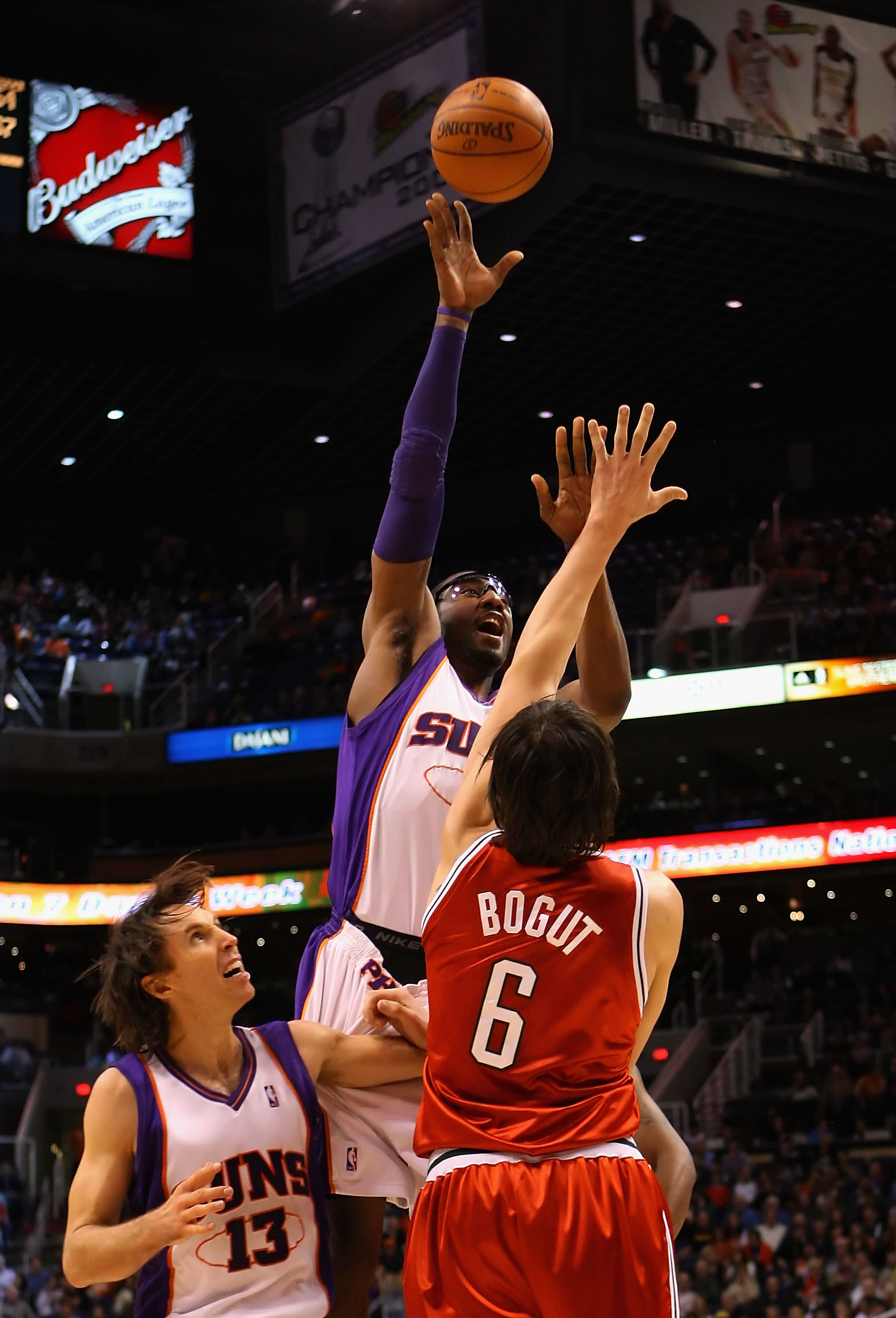 Who do you think got left out? Who shouldn't be on the list? Feel free to leave your comments in the comment section below.