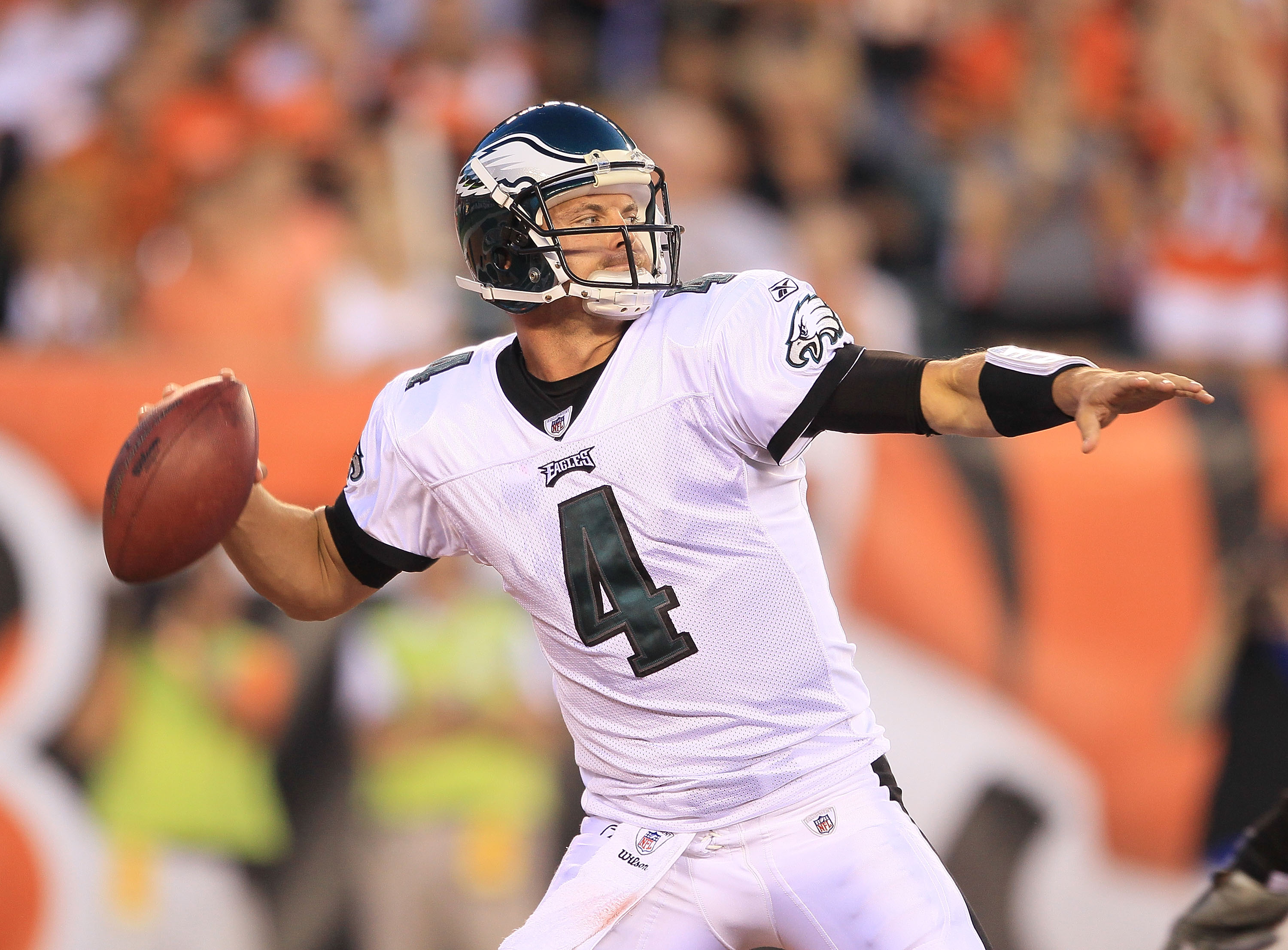 Philadelphia Eagles vs. Kansas City Chiefs is set for Friday night at Arrowhead Stadium, and it will be the third preseason tilt for the 2010 Birds.

Usually, Week Three of the preseason is the one where the starters receive the most reps, sometimes playing all the way through the third quarter. That’s good news for Kevin Kolb, who has looked good on the whole so far and will now be matched against a defense he torched for 327 yards and a pair of touchdowns in Week Three of the 2009 season.

It’s also good news for a handful of players who will either have the chance to show they belong on the first team deserve a lot of PT from their backup positions. The Birds use a lot of rotational players, especially on defense, so the Chiefs game will give the coaching staff their “best” look at how those rotations might work out in the regular season.

These five guys in particular would really benefit if they can make an impact on Friday night—and could clear up a lot of question marks by doing so. 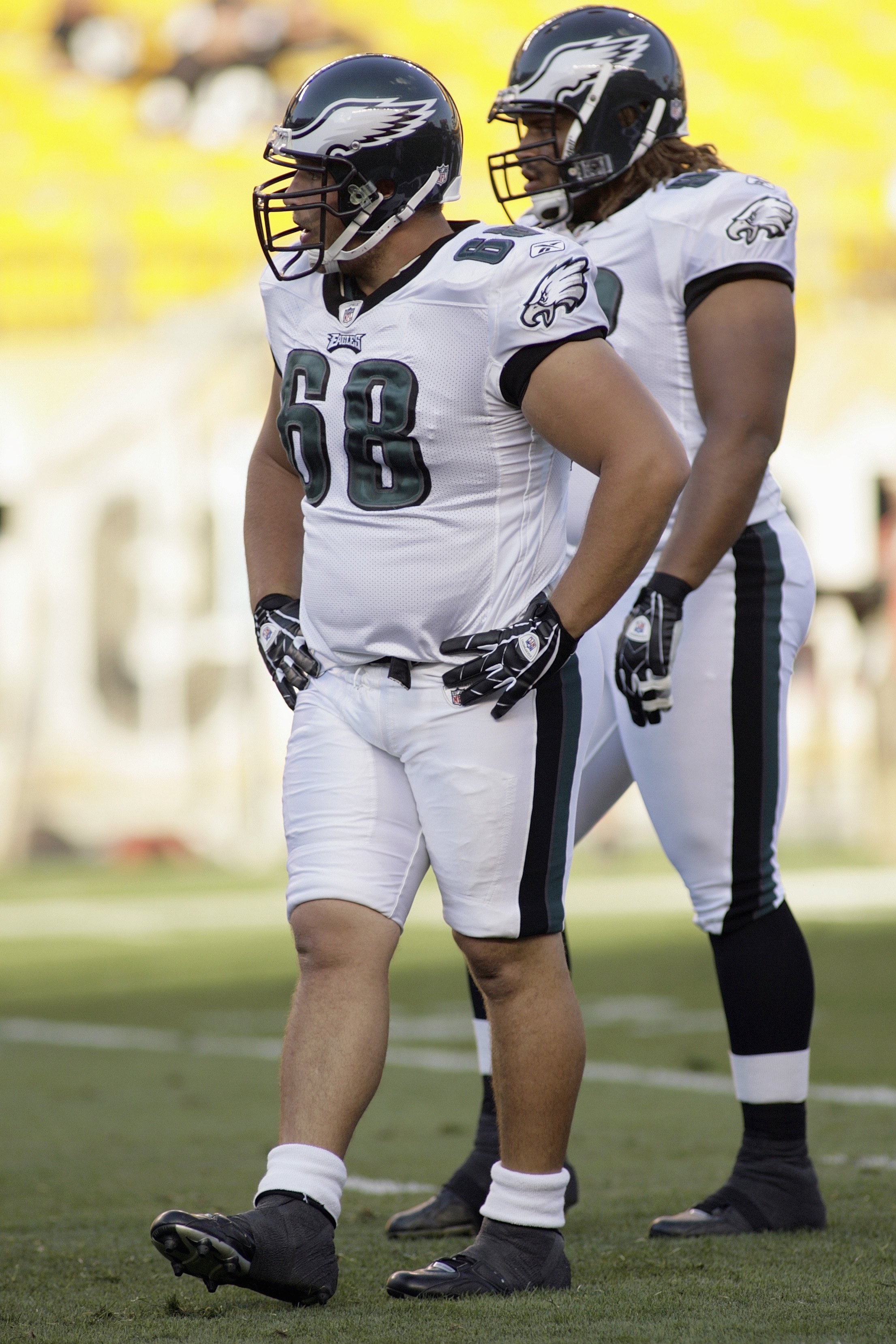 With Nick Cole hobbled most of the preseason by a knee injury, McGlynn has taken a good chunk of the first-team reps at center—and has looked really good doing so.

The true test of his development, however, is seeing if he can handle a task that Cole and injured starter Jamaal Jackson have had no trouble with in recent years: playing every snap and doing so at a high level.

If McGlynn can pass that test, he’ll solidify a lot of things.

One, obviously, is his first-team status, but a big secondary benefit is that he’ll solidify the whole line. Cole is best suited to be a jack-of-all-trades, and he thrives in that role. Having him as the “sixth man” would push the starters at both guard spots (and McGlynn) to continually perform.

McGlynn winning the job would also likely spell the end of AQ Shipley.

Jamaal Jackson should be back at some point this year, but even if he isn’t, the Birds feeling comfortable with McGlynn as his fill-in (and Cole as his backup) means that Shipley, a true center, is unnecessary. He’d likely be kept around as a camp body until his roster spot is needed, but barring injury, his chances of making the team would be zero. 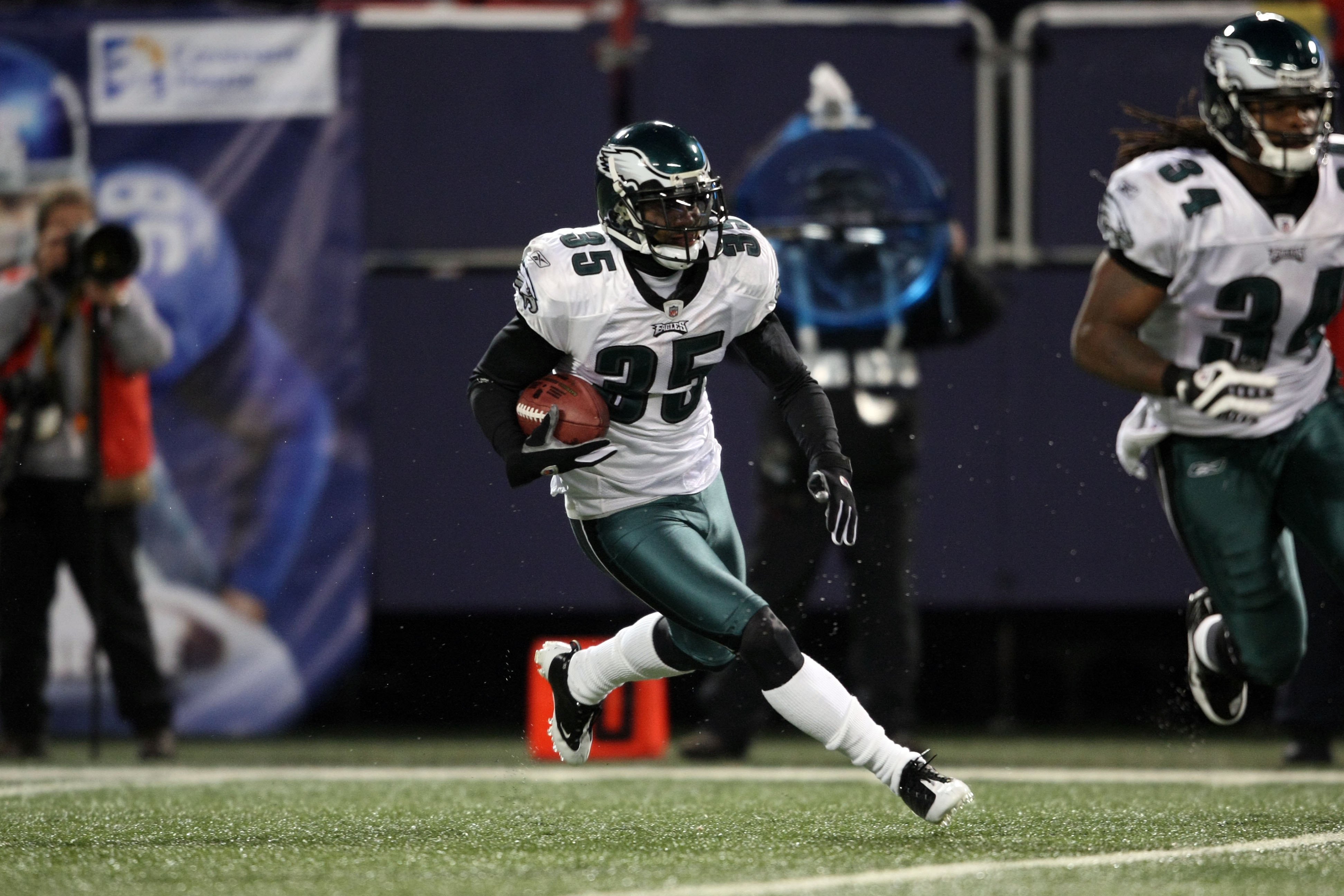 Friday night will be Macho Harris’ his first chance to take the field—with most of his reps coming at his natural cornerback position, not the free safety spot be began the 2009 season as the starter at.

The second-year man has been slowed by injury this preseason, and his health is paramount because his status affects two parts of the Eagles’ plans.

Most importantly, it affects the defensive backfield and the roster decisions in that group. The Eagles are likely keep nine DBs. The starting four (Asante Samuel, Ellis Hobbs, Quintin Mikell, and Nate Allen) are set, as are nickel corner Joselio Hanson and third safety Quintin Demps. Special teams ace Dimitri Patterson has played very well in the preseason as well, so he’s all but sewn up the fourth corner gig.

Harris is likely to stick because of his ability as a kick returner, but his actual position could determine the battle for the “final” slot between rookie corner Trevard Lindley and seventh-round safety Kurt Coleman—both of whom the Eagles like and have seen a lot of good play from so far.

If Macho performs well enough on the corner for the team to feel comfortable with him there, they may opt to keep Coleman as the fourth safety and send Lindley to the practice squad. If he doesn’t, it may be Coleman who gets the boot, Lindley who gets the fifth corner spot, and Harris who gets shuttled back and forth between secondary positions as needed.

It’s weird how the play of others can often sabotage your own status, but that’s sports.

On the other side is the aforementioned return game, where Harris is listed third on the depth chart at kick returner behind Hobbs and Demps.

Many expect Hobbs to lose that top spot simply because he’s now starting at cornerback, so if Harris and Demps can hold the spot down, it will minimize (or even eliminate) the need for guys like J.J. Arrington and Chad Hall. 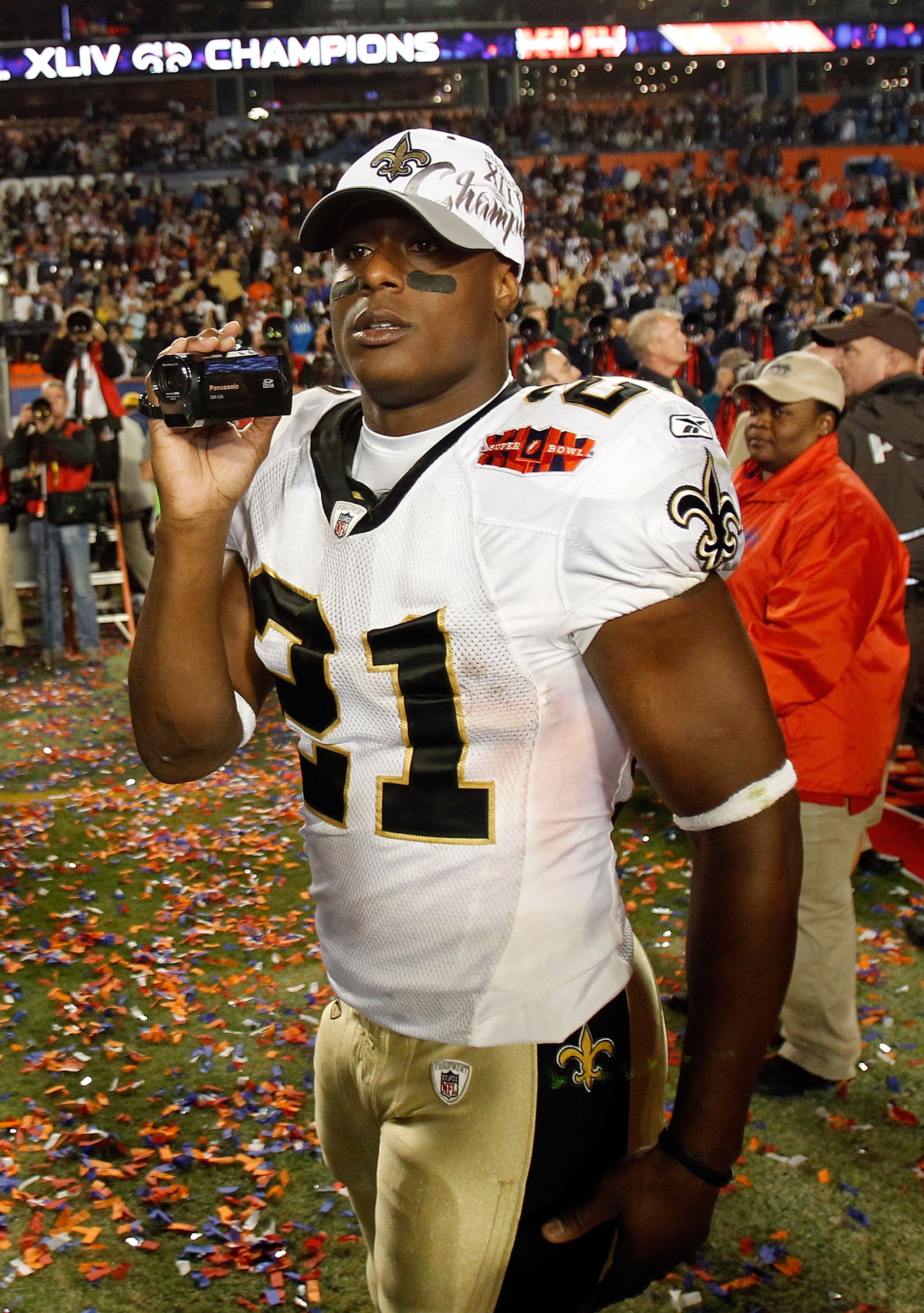 Three players (and maybe four if you count Charles Scott) fighting for the final running back spot on the roster. Eldra Buckley is the heavy favorite in the clubhouse, but if Bell is not 100 percent healthy, Martell Mallett or J.J. Arrington could find their way onto the team.

Bell is set to be the tough inside rusher the Eagles lacked last year—the “thunder” to LeSean McCoy’s lightning, so to speak. The problem is that he hasn’t seen any action yet this year due to injury, giving others a chance to shine.

The former Saint is back now, however, and has reportedly looked great in practice. If he translates that success into a game situation (and doesn’t get hurt in the process), he’ll officially lock down the spot most still think is his.

If not, Birds fans could be looking at Buckley as the No. 2 guy, and Martell Mallett would likely go from CFL Rookie of the Year to NFL reserve. 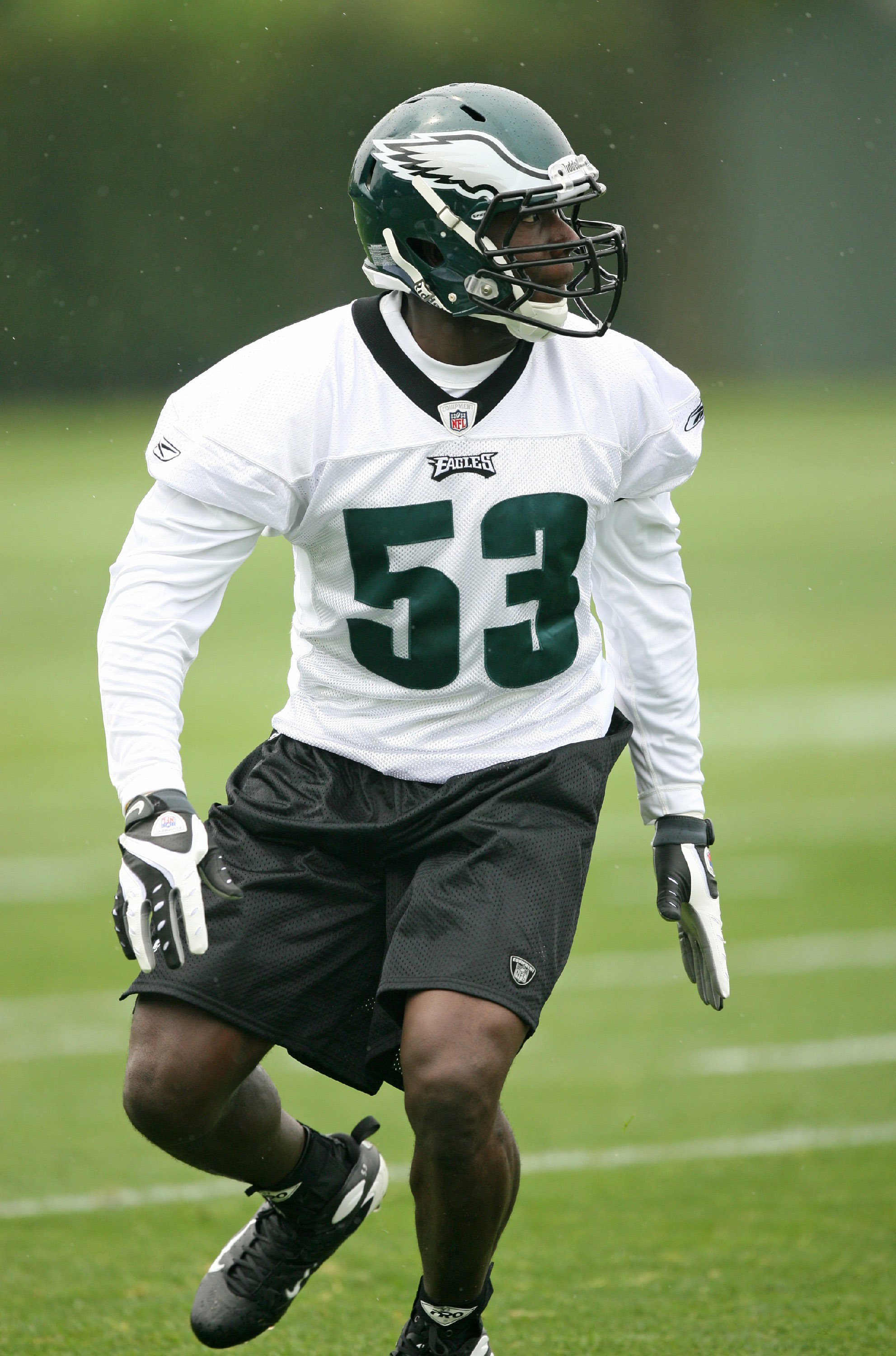 In the span of about 12 months, Fokou has gone from rookie surprise to starting SAM to fifth on the ledger.

The latest Eagles depth chart has Akeem Jordan as the starting SAM, and Omar Gaither’s versatility makes him the “fourth man” on that unit.

Even though the Birds have been known to keep seven backers, Fokou still has a lot of work to do.

The brass likes him a lot, and he has some good upside; he rushes the quarterback a bit, is good on special teams, and already knows the system.

The problem, though, is that he’s the least versatile of the remaining bunch.

He’s a true SAM, so guys like Keenan Clayton and Jamar Chaney (who can likely play either side) have him there. Tracy White is a special teams ace and also knows the system, and Simoni Lawrence is learning quickly despite limited reps.

Fokou struggled at times last year as the starting SAM, and from all accounts hasn’t terribly improved in more than one of the areas he’s lacking in.

So far, the Eagles have been rotating linebackers like crazy depending on the situation, so Fokou will likely see a lot of time on Friday night. If he plays well, he should solidify his spot on the team.

If he doesn’t, he may just become the next draft pick who follows a meteoric rise with a quick, hard fall.

There’s not much that needs to be said other than this: as of right now, Brandon Graham is running reps with the first-team defense in practice.

That doesn’t mean he’s the starting LDE just yet. But it does mean he’s close.

Juqua Parker, who is still a better run defender, is penciled in there. But if Graham can look dominant against Kansas City in whatever action he gets, that performance will go a long way towards him officially supplanting the incumbent.

Parker will still be an important part of the line rotation—but if Graham goes crackers, it’ll be more of “Parker spelling Graham” than the other way around.