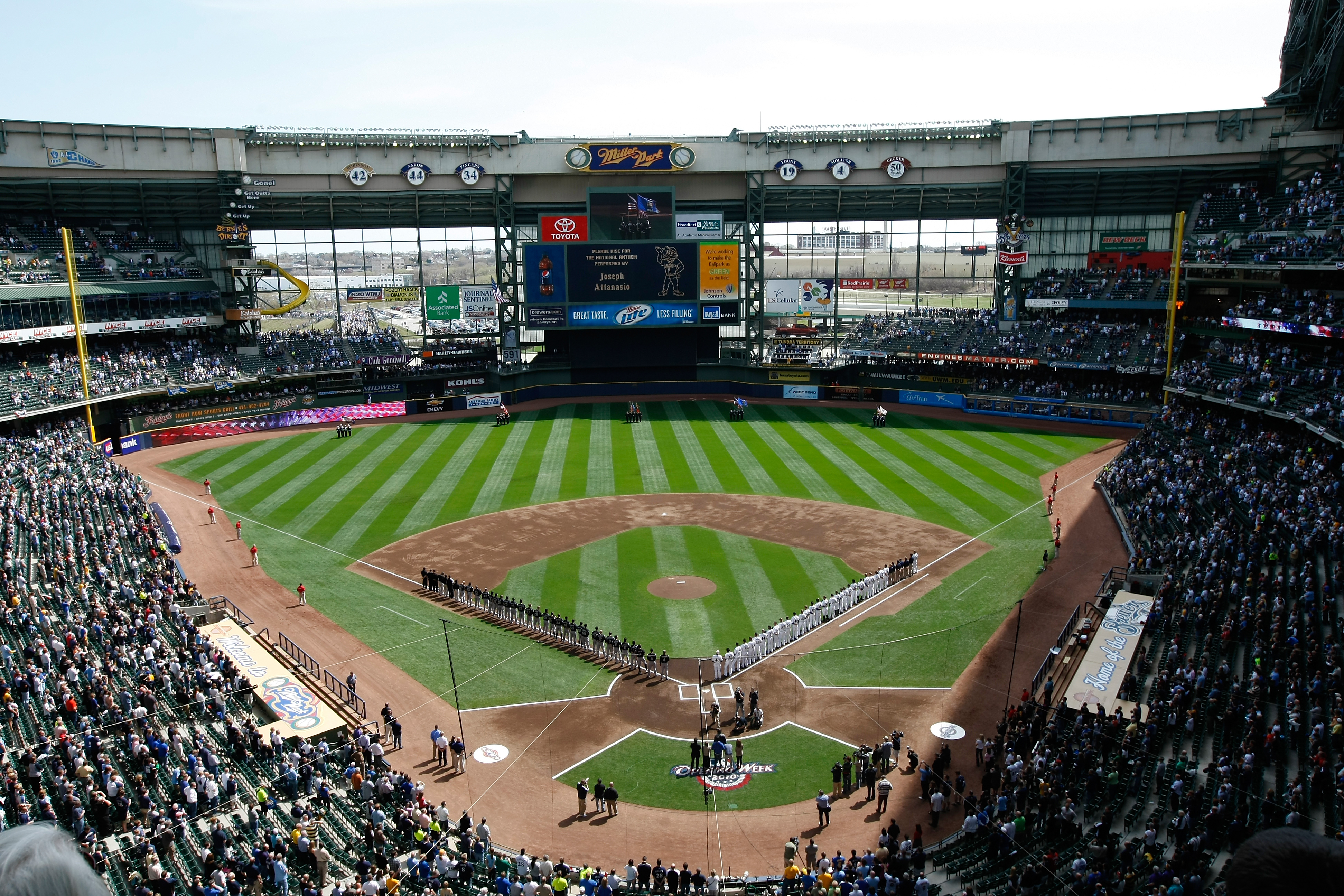 It has been a rough season for the Milwaukee Brewers.

The team entered with a new starting rotation and high expectations of making the playoffs, but none of that has gone as planned. The team currently sits at 59-65 and may be the most consistently inconsistent team in 2010.

But with just over a month left in the season, let's take a look at some of the good things that make up the Brewers. They have a great young core in Ryan Braun, Yovani Gallardo, John Axford, Casey McGehee, Alcides Escobar, Jonathan Lucroy, Corey Hart, and Lorenzo Cain. The team also plays at one of the most unique ballparks in the MLB.

Miller Park is famous for its food, fans, and events. Everyone loves both the bratwurst and Bernie Brewer's home run slide, but there is more to the stadium.

Here are the ten greatest things that make up Miller Park. 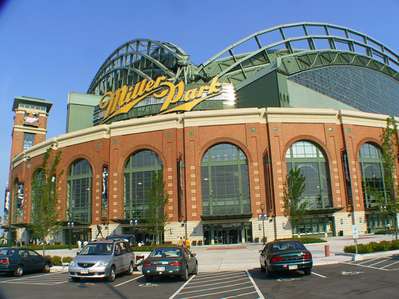 Part of the park, after all, is the outside, and Miller Park's exterior doesn't disappoint.

The brick and mortar base is gorgeous and easy to see from far away. While the roof's olive green color could use a paint job, the dome-shaped roof itself is unique and one of the most distinguished features of Miller Park.

The Miller Lite clock tower that extends up from the base is a nice touch and keeps the brick and mortar pattern going.

From far away, Miller Park looks even better. Unlike some stadiums, you can tell that baseball is played there. 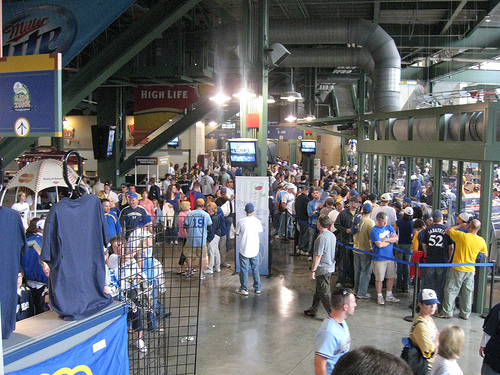 Miller Park's wide concourses are easily accessible from any seat and keep the fan right on top of the action.

Prior to any game, including sellouts, the concourses allow for the easy flow of traffic, and the escalators for the Loge, Club, and Terrace levels are easy to find.

Even with thousands of fans crowding the stadium, there is still enough room to allow for the major ballpark amenities.

Following a Brewers' win, it is normal for the entire stadium to burst into a "Let's Go Brewers" chant, and these chants reverberate through the concourses. 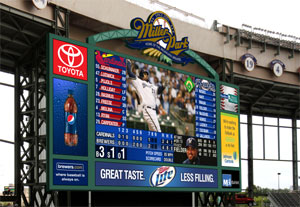 This slide makes the list as much as for the future as for the present.

While the current scoreboard is relatively large and visible from any spot in the park, the team has announced plans to build the third-largest scoreboard in the MLB by Opening Day 2011.

It will be a single-screen, high-definition display, clad with all the basics and more, such as batter stats, live HD game video, and previous batter outcomes. It will have 18 times better resolution than the current scoreboard.

It will be the biggest and most expensive fan enhancement since Miller Park's inception in 2001.

Let's just hope that Prince Fielder and Ryan Braun don't smash it too much. 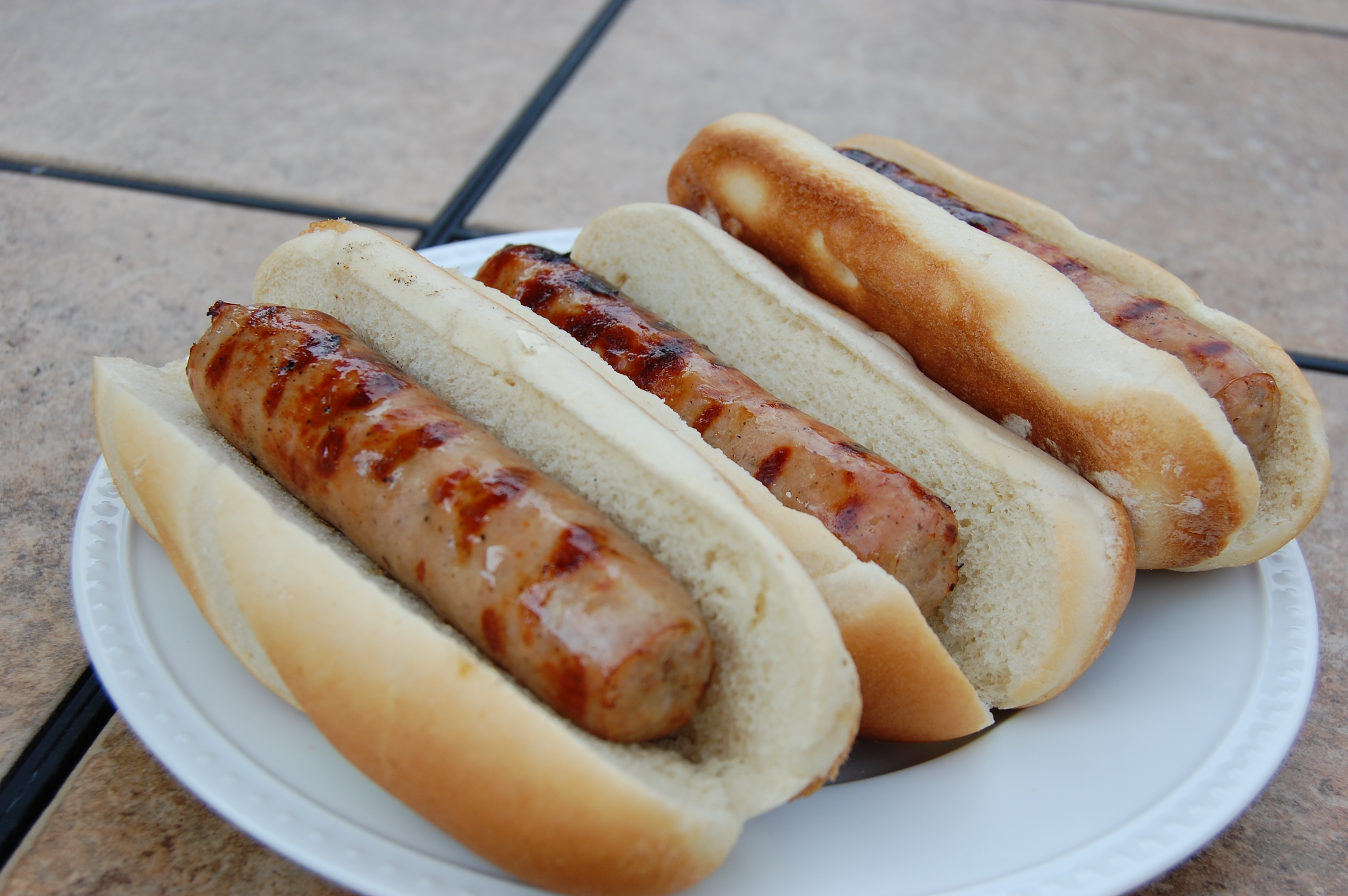 If you have gone to a game at Miller Park and haven't had a sausage, then you haven't lived.

Miller Park is currently the only stadium in the Majors to sell more sausages than hot dogs. With a selection of Bratwurst, Polish, Italian, and Chorizo, there simply is no wrong choice. And, at $4.50, they are very affordable.

Not only are the sausages great, but the entire concession stand selection is terrific. With Cactus League Nachos or helmet cheese fries, you can't leave Miller Park yearning for better ballpark food.

The stands are scattered across the stadium and are there at every bend. They are directly behind each section and visible from a distance. Located in the concourses, you can still watch the game while purchasing a brat or hot dog.

And the beer? There's plenty of that to go around. 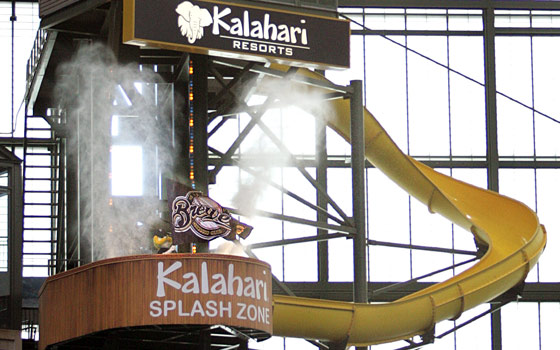 While not the most noticeable feature, Bernie's Dugout definitely adds a unique feel to Miller Park that no other stadium can match.

Perched way up high above the left field bleachers, Bernie Brewer, the team mascot, stands in Bernie's Dugout during games, posting 'K' signs, dancing, and, most famously, taking a trip down his yellow slide whenever a Brewer hits a home run into the Kalahari Splash Zone.

It definitely adds to the appeal of young kids experiencing a game for the first time. The ballpark isn't so bland and monotonous to a kid when they see the distinct yellow slide.

And let's admit it: whatever your age, you still check out Bernie after every homer, and everyone gets excited to see the golden mustached mascot waving a Brewers flag.

Bernie's dugout and his slide definitely make up one of Miller Park's most unique features. 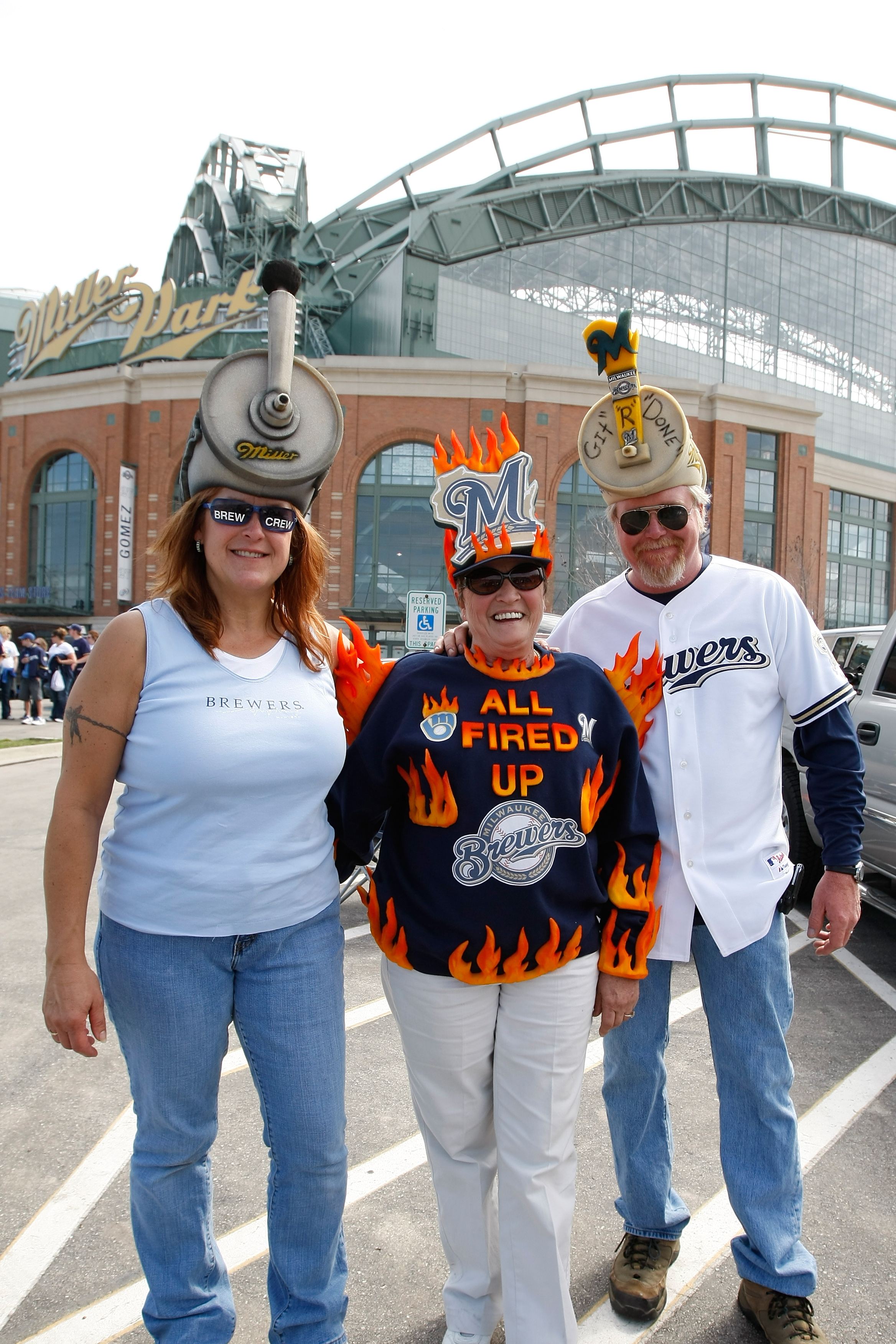 For a team that has never won a World Series title, the Brewers have some of the most loyal fans in baseball. Even in losing seasons such as this year, they still show up in numbers and root on the Crew. Everyone I know considers it a treat to go to Miller Park to watch the Brewers.

Brewers fans are, along with being loyal, extremely friendly. Every team has its exceptions, but opposing fans are treated well (Cubs' fans not as much). The fans know the park like the back of their hands and can show opposing fans around the park with ease.

Knowledge of the game is abundant amongst the fans. Sacrifice flies and moving the runner to third are applauded and respected by the fans.

There are always the fan favorites, this team's being Braun, Fielder, Trevor Hoffman, John Axford, and Craig Counsell. If the players perform, they will receive their due respect and adoration. 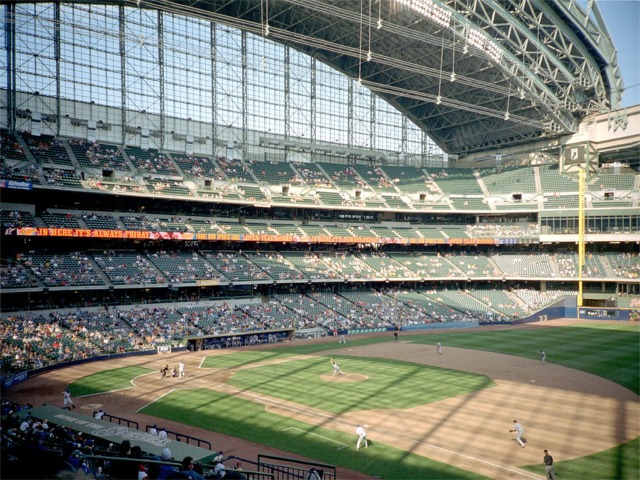 By the way, that's the top of the third deck, all the way down the right field line. From any seat at Miller Park, you feel right on top of the action, even from so far away.

Normally a nosebleed dweller, I have sat in every general area of Miller Park, excluding field level, right field bleachers, and right field Terrace Level. Even in the Terrace Level, you are directly above the action and can see home plate from every angle.

The upper deck is one of the best deals in all of baseball. There are plenty of discounts available for tickets, which are relatively cheap.

You don't have to be two rows from the field to have a good seat in Miller Park. 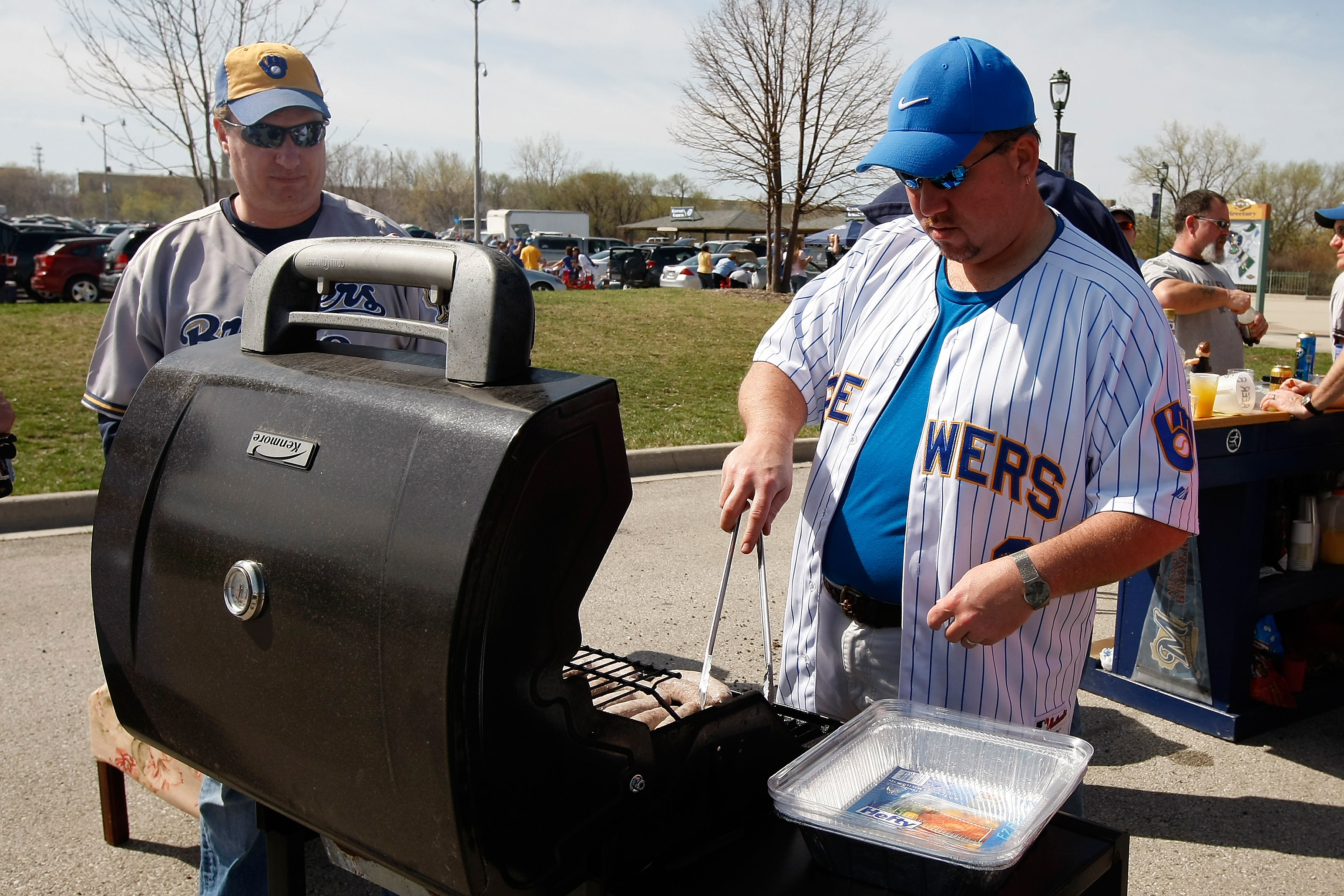 The parking lots in Miller Park are built for tailgaters, which there are plenty of. There is plenty of space in between rows and grassy areas in between lots for playing catch or bean bag toss.

Brewers' fans tailgate like it's a football game. No other fans can replicate the mass of fans outside the stadium firing up the grill prior to game.

Whether it be brats, hot dogs, burgers, venison, or whatever else, fans are always heating up plenty of meat to scarf down before a game.

There's more to a Miller Park tailgate than the food. Groups set up multiple lawn chairs and listen to the pre-game show or play games. Some have gone as far as to rent out a tent for a tailgate party.

One group of tailgaters is featured at every game, receiving free bratwurst, hats, and t-shirts, with their video being played between innings.

If I didn't know better, I would think I was going to a football game. 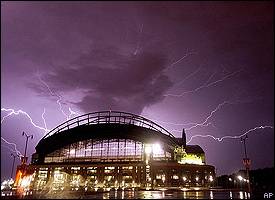 Miller Parks' retractable, fan-shaped roof allows baseball to be played every day in Milwaukee. A game is never canceled due to inclement weather. If it starts raining, the team can simply close the roof. It closes quickly, which prevents much of the rain from reaching the field.

The roof is adaptable to any weather. If it is 45 degrees outside in April, the roof will be closed. When it's scorching hot, it stays open.

Some have complained about the "dome" feeling when the roof is closed. Would you rather play with a closed roof and open panels or not play at all?

It is visible from the highway through downtown Milwaukee a few miles away and makes Miller Park one of the city's most distinct features.

Love it or hate it, the retractable roof eliminates any thought of a rain delay at Miller Park. 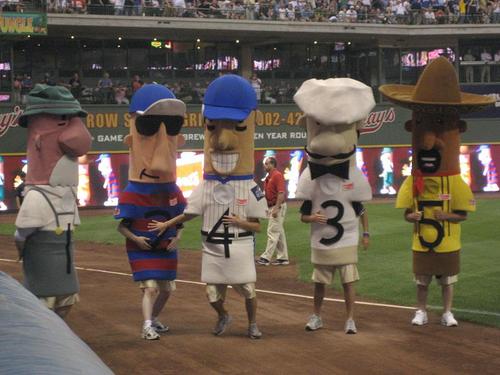 The greatest thing about Miller Park is, without question, the world-famous Sausage Race.

Originating before the fake Pierogie race and President's Race, the Klement's Sausage Race takes place every game at Miller Park in the middle of the sixth inning. The crowd always stands while the Bratwurst, Polish, Italian, Hot Dog, and Chorizo make their way around the infield warning track as the fans root on their favorite.

Standings are actually kept, times recorded, and wagers placed on the running of the sausages. That's how serious this race is.

Every visiting fan loves the experience, as it is something they can only witness at Miller Park. I have heard opposing fans call it "the coolest thing ever" and "weird, but really, really awesome."

The infamous "Sausage Whacking" took place on July 9, 2003 at a game I was at. Pittsburgh Pirates' infielder Randall Simon hit the head of the Italian sausage, knocking it down along with the Hot Dog. He was fined and suspended three games by the MLB. Later on that season, at another game I was at, Simon was playing with the Cubs and was booed harshly by the Brewers' fans. I must note that Simon was a good sport about it, signing the bat he used to knock down the sausage and giving it to Mandy Block, the girl who fell.

Whether a sausage is knocked down, a catcher is run over, or any other weird occurrence happens, the Sausage Race always delights the fans and adds a unique experience to Miller Park.